Welcome to the Hooniverse News! As always, this is a weekly recap of the biggest stories in the automotive industry without the fluff or bull. This week we have the new Alpina B7, a very green (literally) Toyota 86, a very green classic Mini (figuratively), and a special edition Bugatti Chiron with some French flags on it, and more! 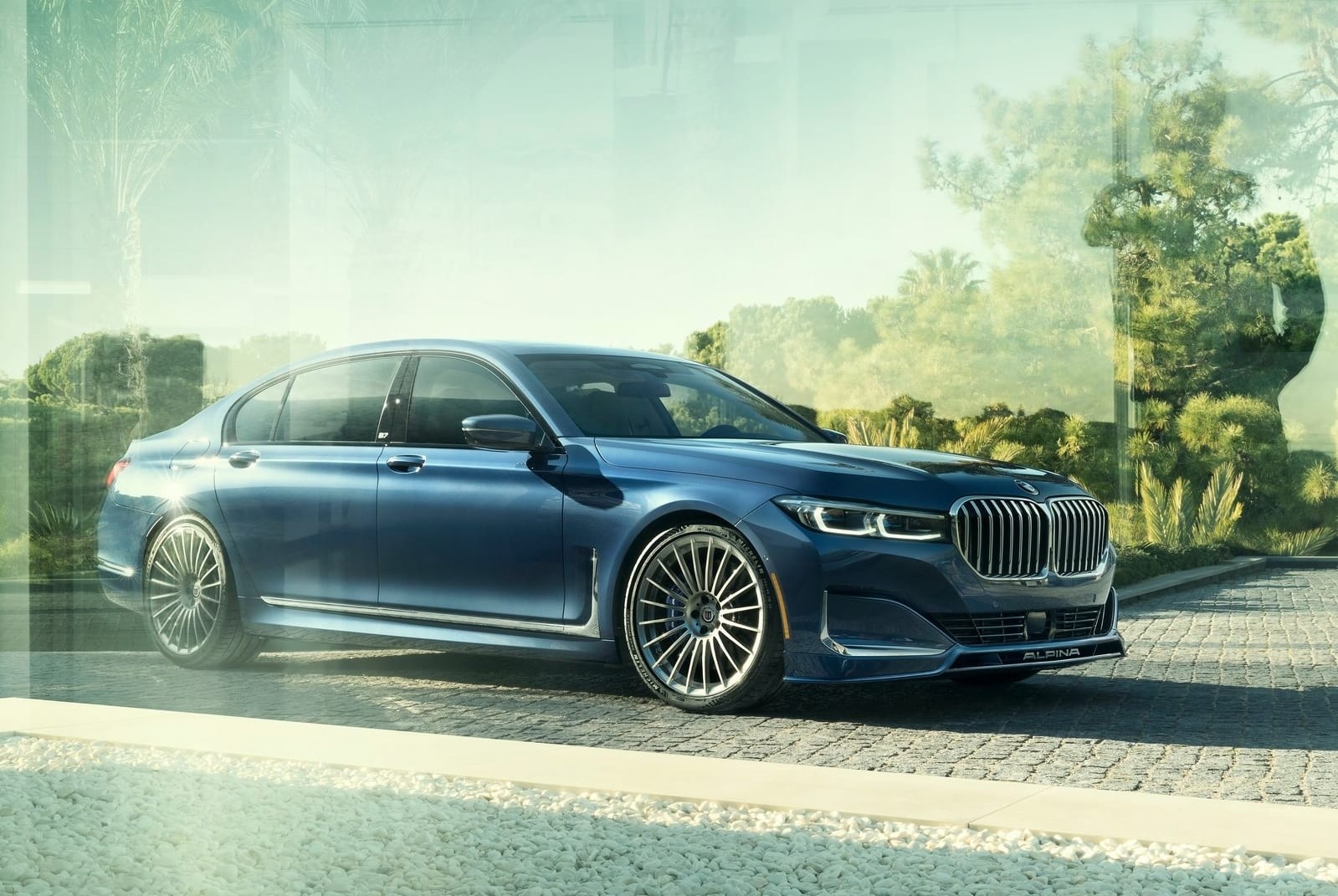 The general Alpina formula is simple but effective: add small subtle lower body enhancements, paint it blue, slap on their signature wheels, and add a ton of power. They haven’t deviated from that at all with the 2020 Alpina B7 xDrive Sedan but that doesn’t make it any less interesting.

The B7 starts with the 750i’s 4.4-liter twin-turbocharged V8, xDrive AWD system, and ZF eight-speed automatic transmission and makes better use out of them. By fitting a larger impeller in the exhaust side of the two twin-scroll turbochargers, custom intercoolers with “an interconnection to equalize and reduce pressure pulsations between the two cylinder banks of the V8 engine”, and a more aggressive engine tune, they’ve been able to crank out 600 horsepower and 590 lb.-ft. of torque. They also added a stainless steel exhaust system with active valves for good measure.

Alpina also fiddled with the software and some hardware in ZF’s eight-speed automatic transmission to stand up to the added power. It has a closer gear ratio, reinforced torque converter and planetary gears, and inner transmission cooling and they say no torque reduction is needed during upshifts.

All that plus BMW’s standard xDrive system means 0-60 mph sprints take just 3.5 seconds and it won’t stop going until it hits 205 mph. 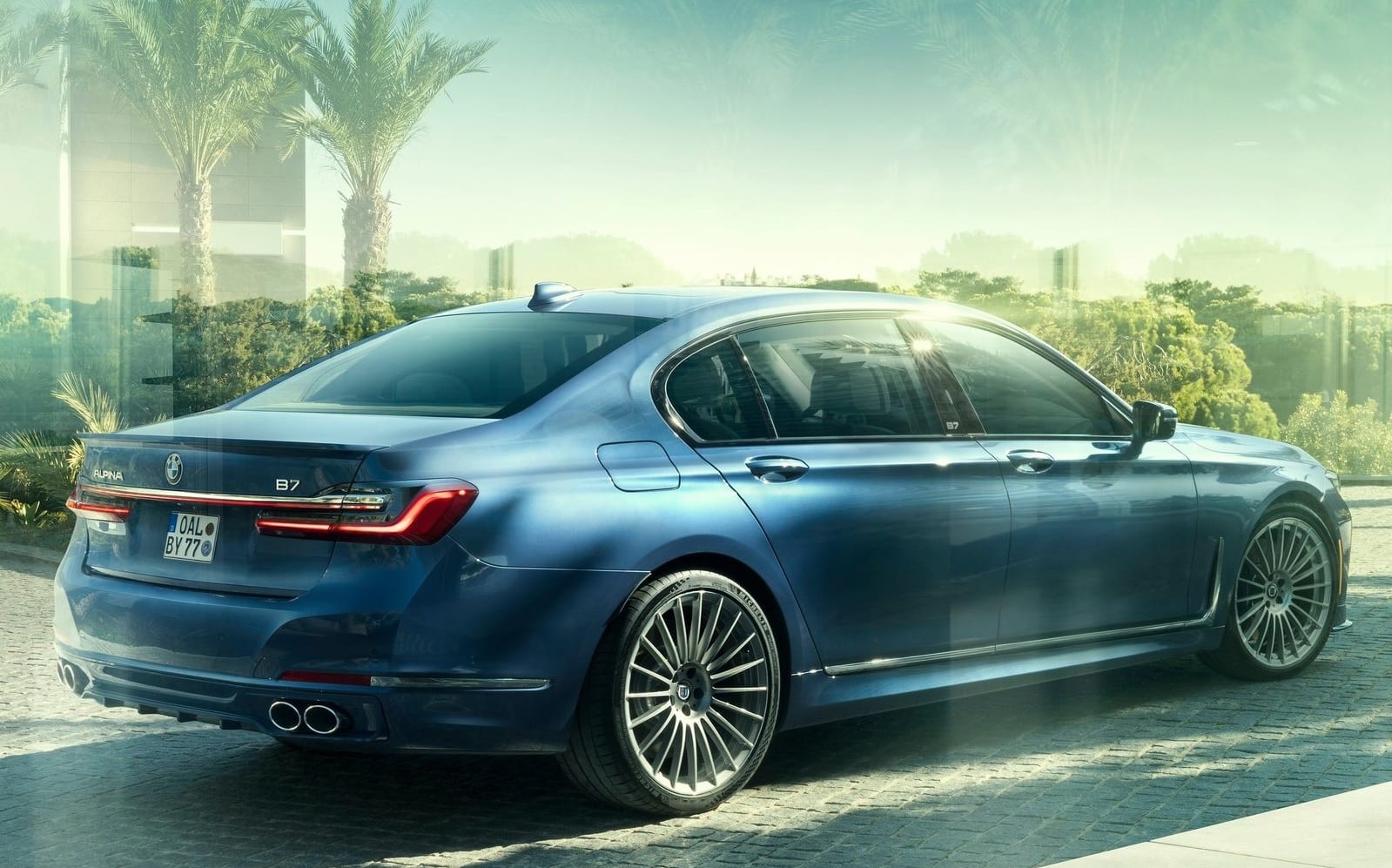 The already advanced suspension system from the 7 Series gets some additional Alpina features like a height-adjustable two-axle air suspension system. When in Sport mode or at speeds over 140 mph, the car drops by 0.6″ for a lower center of gravity. It can also raise itself by 0.8″ at lower speeds should you find yourself on the poorly-maintained roads of uncultured middle class neighborhoods again.

The styling is pretty much business as usual for Alpina with a new front bumper featuring functional air intakes, and a rear spoiler. Both of those contribute to greater high speed stability with essentially zero lift at speed. The Alpina sport exhaust opens up to two elliptical twin tailpipes that are cleanly integrated into the rear bumper. The Alpina Classic wheels can be ordered in 20″ or 21″ in size and are wrapped in ultra high performance Michelin tires (or all-seasons). It can be ordered in exclusive ALPINA Blue metallic and ALPINA Green metallic paints or with any regular 7 Series color.

No word on pricing yet but this car will be just the 3rd generation B7 to reach US shores. 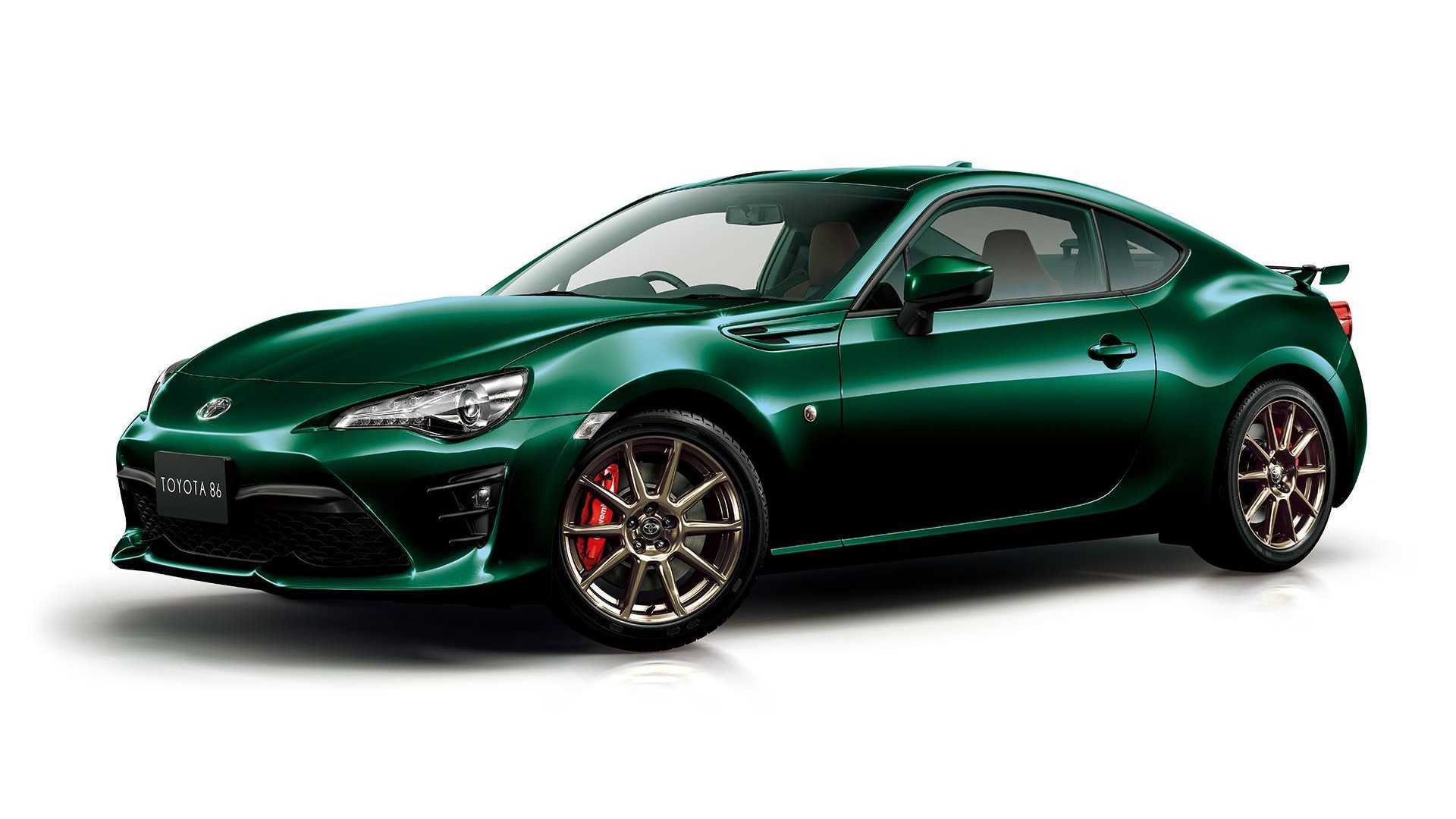 In news that will only matter to Japanese readers who were unfortunate enough to stumble upon this article, Toyota is offering a pretty neat special edition 86 that draws inspiration from a place that is distinctively not Japan. Just because it looks good, British [Racing] Green makes its debut on the Toyota 86 for a special edition that… th-th-that… has us (omg are you guis ready for this) green with envy. I bet none of the other car journalists thought of that one.

This iconic color is contrasted with a beautiful bronze hue on the wheels and nice earthy tan leather accents inside. There isn’t much else to this car besides a bespoke color combination, lightweight aluminum wheels, and Brembo brakes, but that’s really all it needs to earn our love. 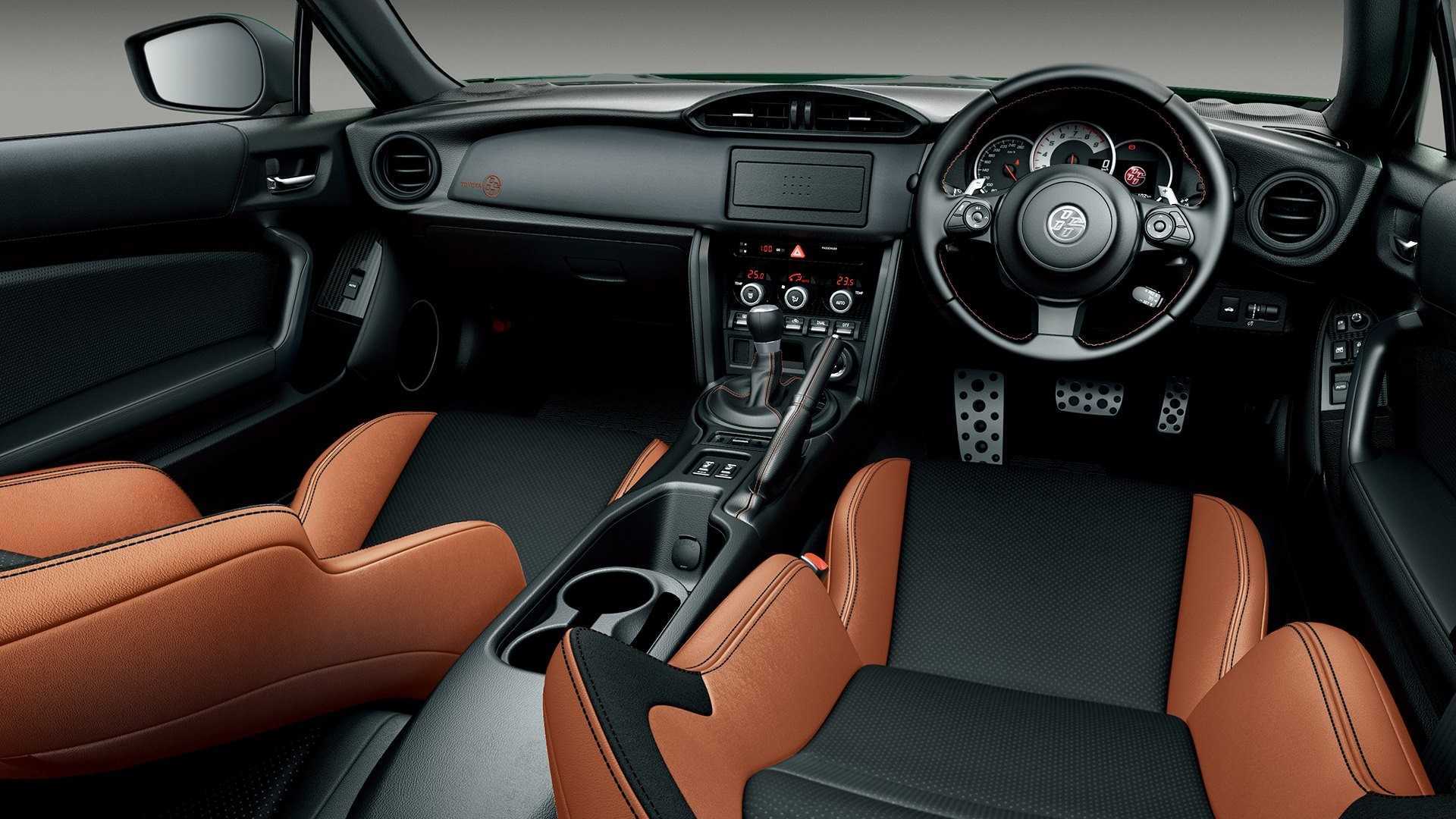 They say it’s a Japan exclusive at the moment but I wouldn’t be surprised if they at least offer it in the UK at some point. Until then, those blessed with the opportunity of being a car enthusiast in Japan can place orders until May 31st. 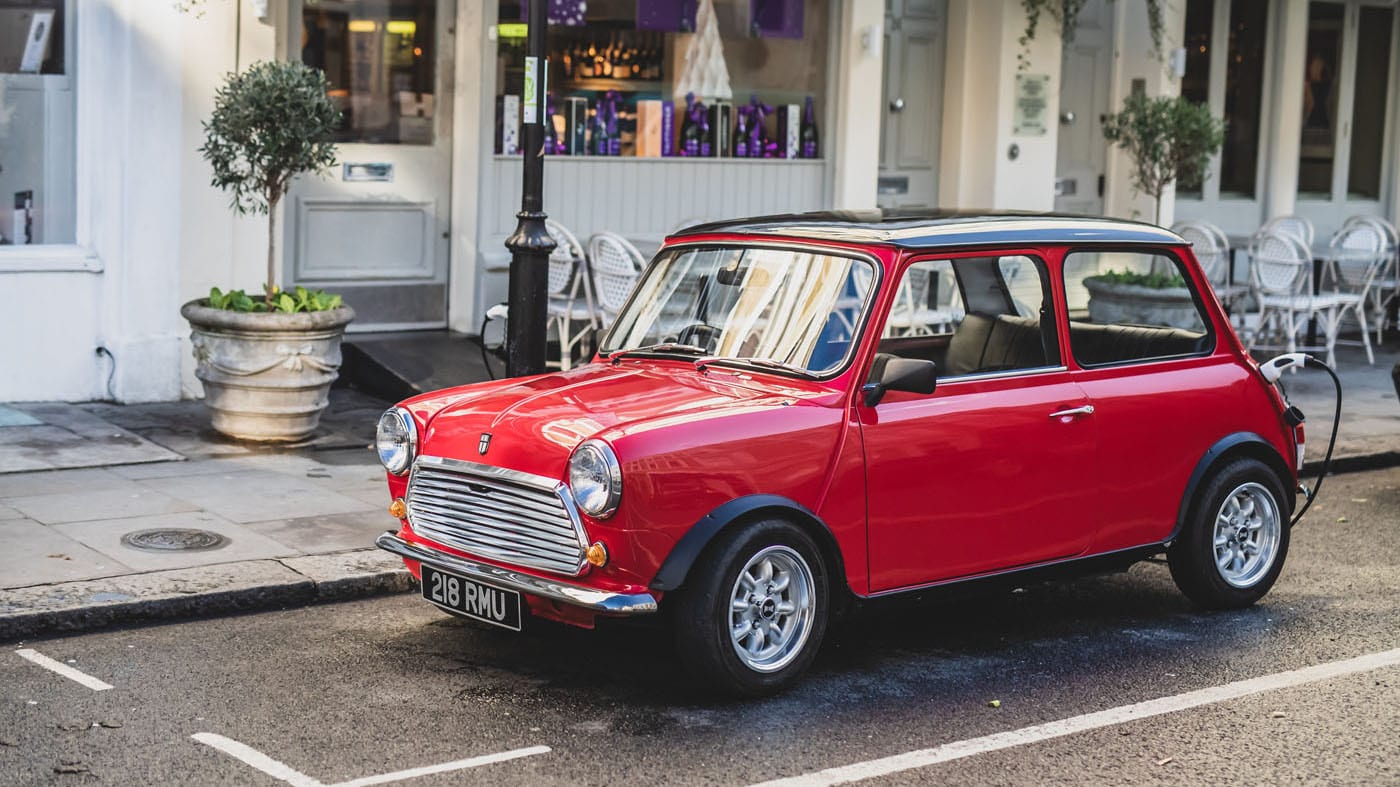 The powertrain specialists at Swindon Powertrain in Swindon, UK introduced yet another one of those classic car EV conversions, but this one actually makes a bit of sense. It’s called the Swind E Classic Mini and it’s a fully electric Mini that will be produced in a limited run of 100 units.

These Classic Minis are completely restored and modernized, and not just in the powertrain department either. It features a 24-kWh lithium-ion battery and an 80-kW electric motor with the equivalent of 108 horsepower, an 80-mph top speed, and a city-dwelling range of 125 miles. That kind of hardware in something as compact as an original Mini sounds like a compelling argument for a city car.

Swind claims it still offers the same kind of character the originals were known for but in a package that’s a bit more modernized. For instance, the cabin features navigation, heated seats, and USB ports. The more compact packaging also means there’s some additional trunk space. Or any trunk space.

If there’s anything that doesn’t immediately sound promising, it’s the price. £79,000 is what these start at, which translates to a little over $100,000. Just as a reference, Autoclassics.com tells me a Concours quality Mini can run up to £37,000 / $47,000. I don’t doubt a hand-built and modernized Mini with a bespoke EV powertrain produced in such limited quantities can be sold for that much, but that just sounds… steep. 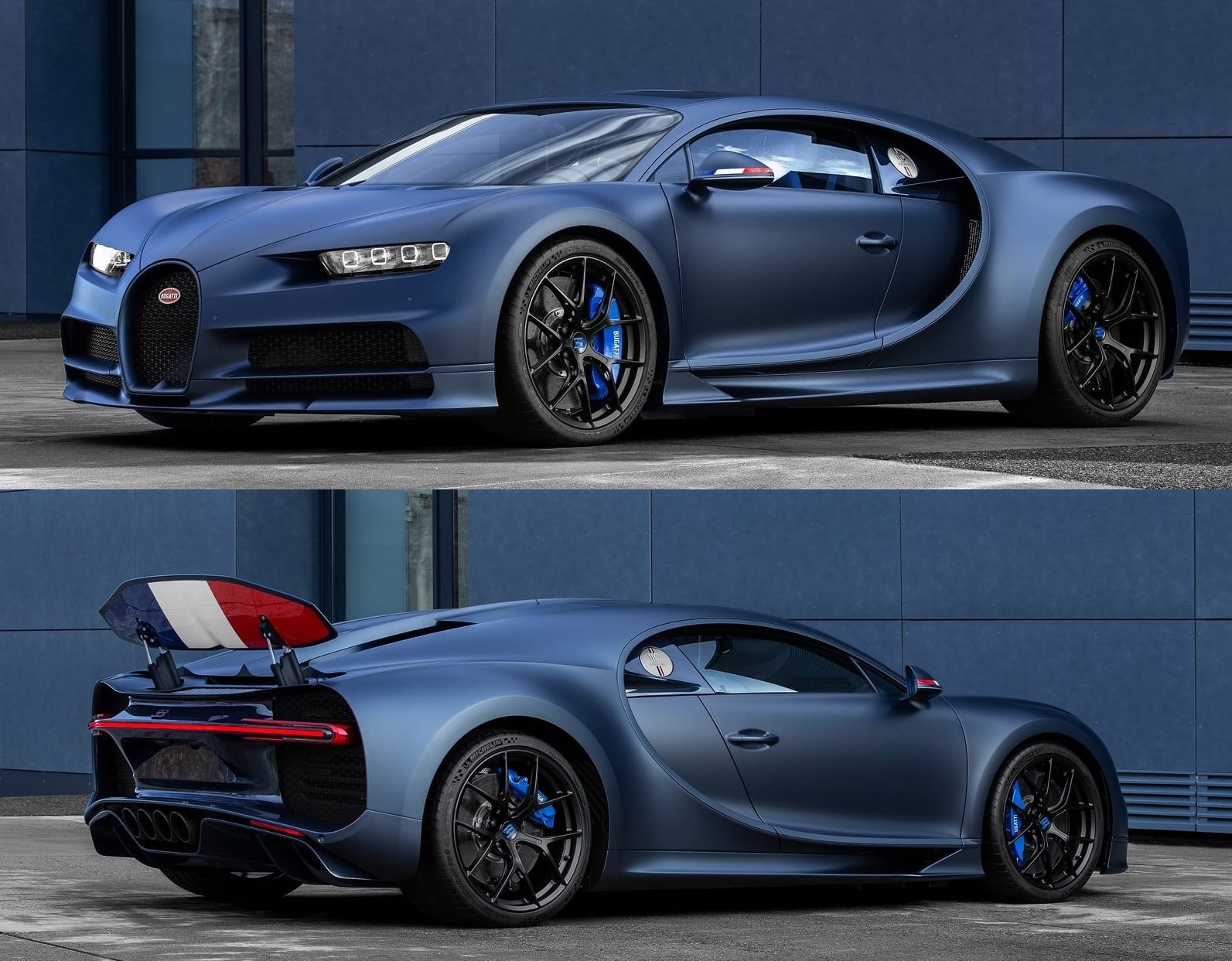 And now for something completely different.

Bugatti is celebrating its 110th anniversary with an even more exclusive version of one of the most exclusive cars in the world. 20 examples of the Chiron Sport will be produced in this 110 ans Bugatti (110 years of Bugatti) specification which adds a Steel Blue matte exterior finish, a bigass French tricolor painted on the underside of the active spoiler, matte black wheels, and a themed interior with tricolor accents. Any of the Chiron Sport’s exposed carbon fiber accents get a transparent Steel Blue finish applied to them as well. 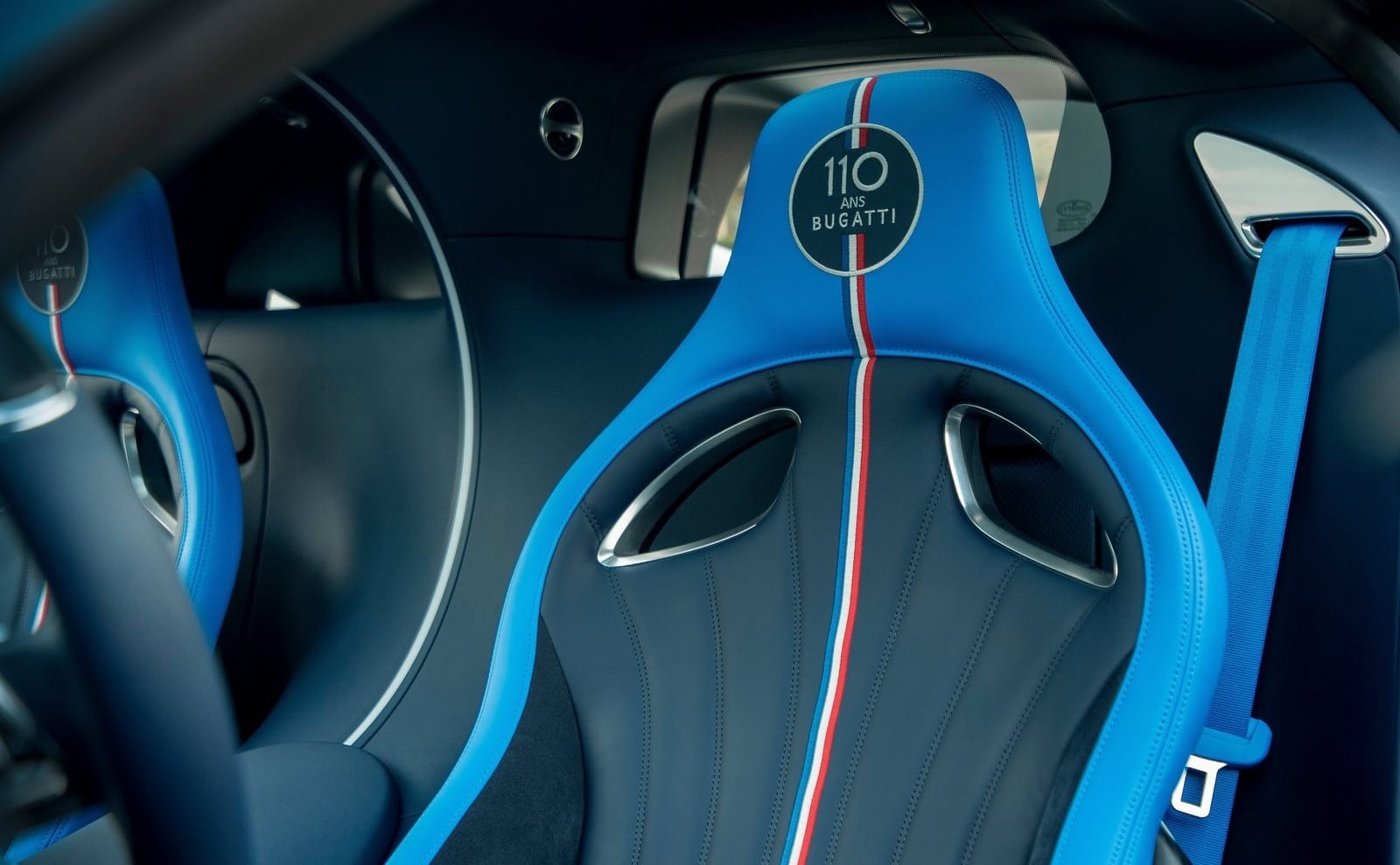 Sadly, this is just an appearance package as no part of the Chiron Sport’s 1,480-horsepower W16 engine will get any new upgrades. 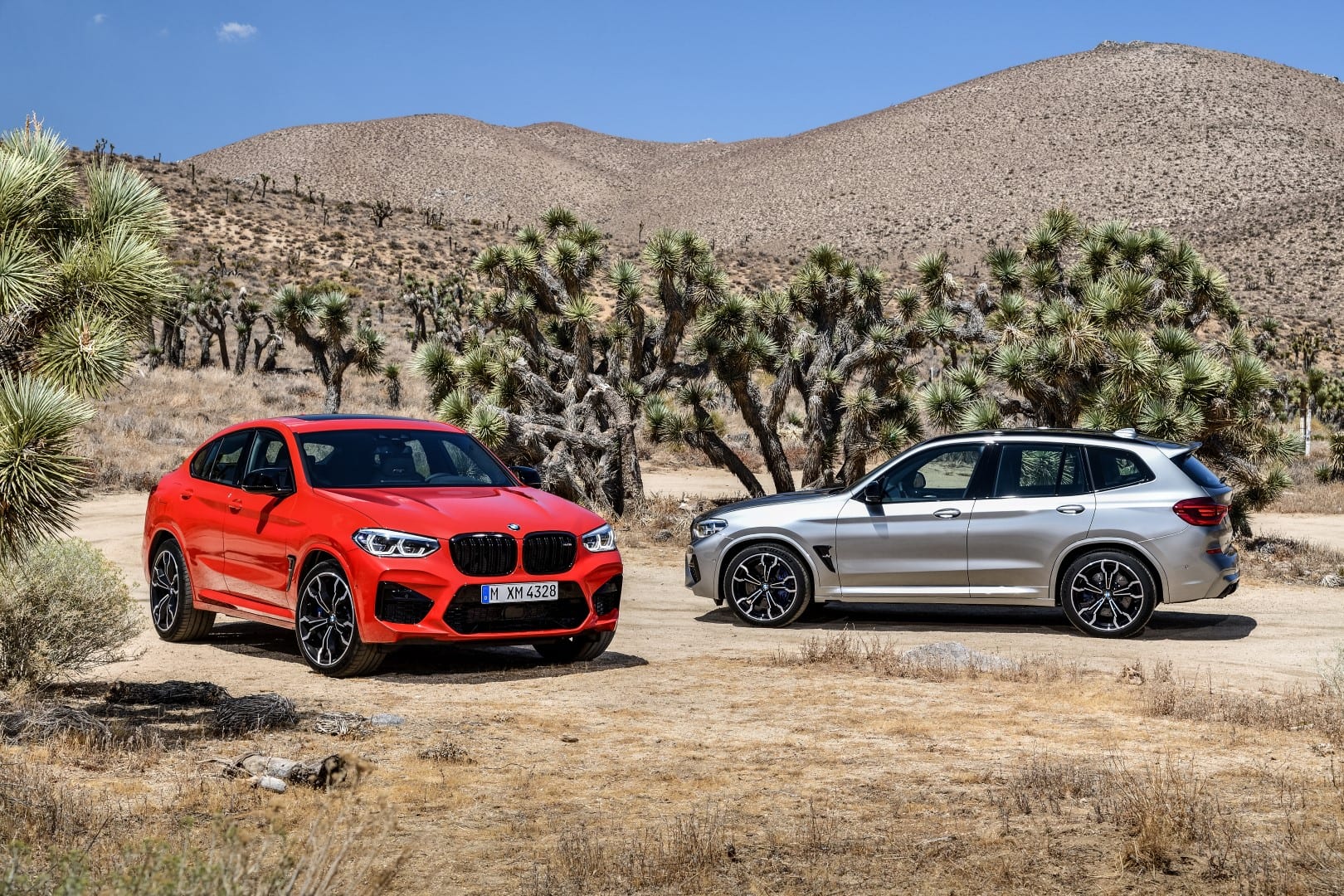 I want to use this space to publicly thank Kamil for covering the inevitable BMW X3 M and X4 M earlier this week so that I didn’t have to. If you a glimpse into what a future without proper sports cars will look like, look no further.

For significantly less disappointing news from the BMW family, Mini is bringing the John Cooper Works GP back for another round of fun and it’s debuting at the New York auto show this year. We’ll be following this one closely…

And finally, Land Rover confirmed that the new Range Rover Sport HST will feature a brand new inline-six engine with an electric supercharger cranking out an impressive 395 horsepower and 405 lb.-ft. of torque. We approve. 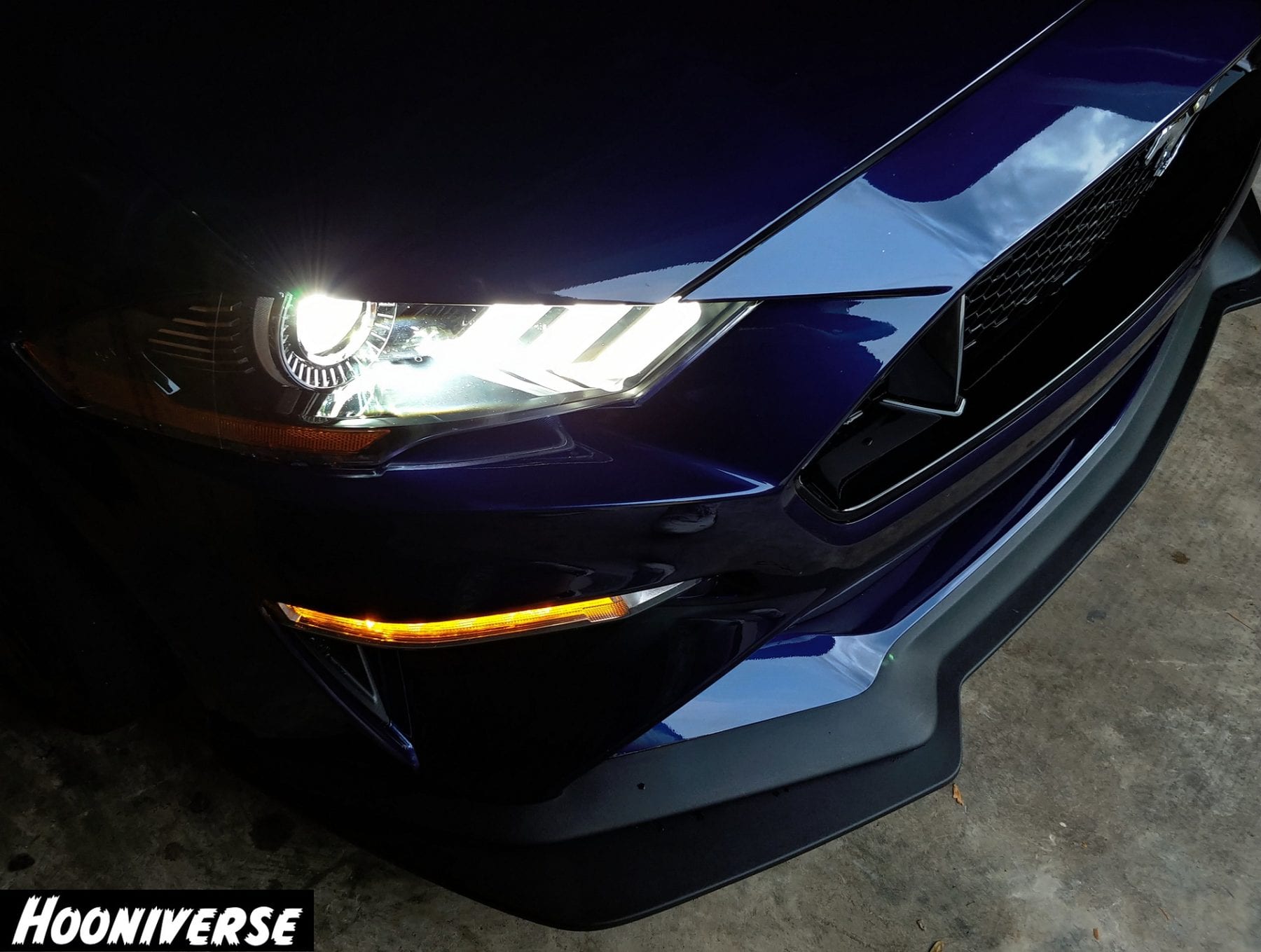