In their press release, BMW includes pictures of the cars at the Willow Springs International Motorsports Park and in the desert. That is odd as I can’t imagine that anyone will drive either of these vehicles to a desert or a race track, but I’d love to be proven wrong. 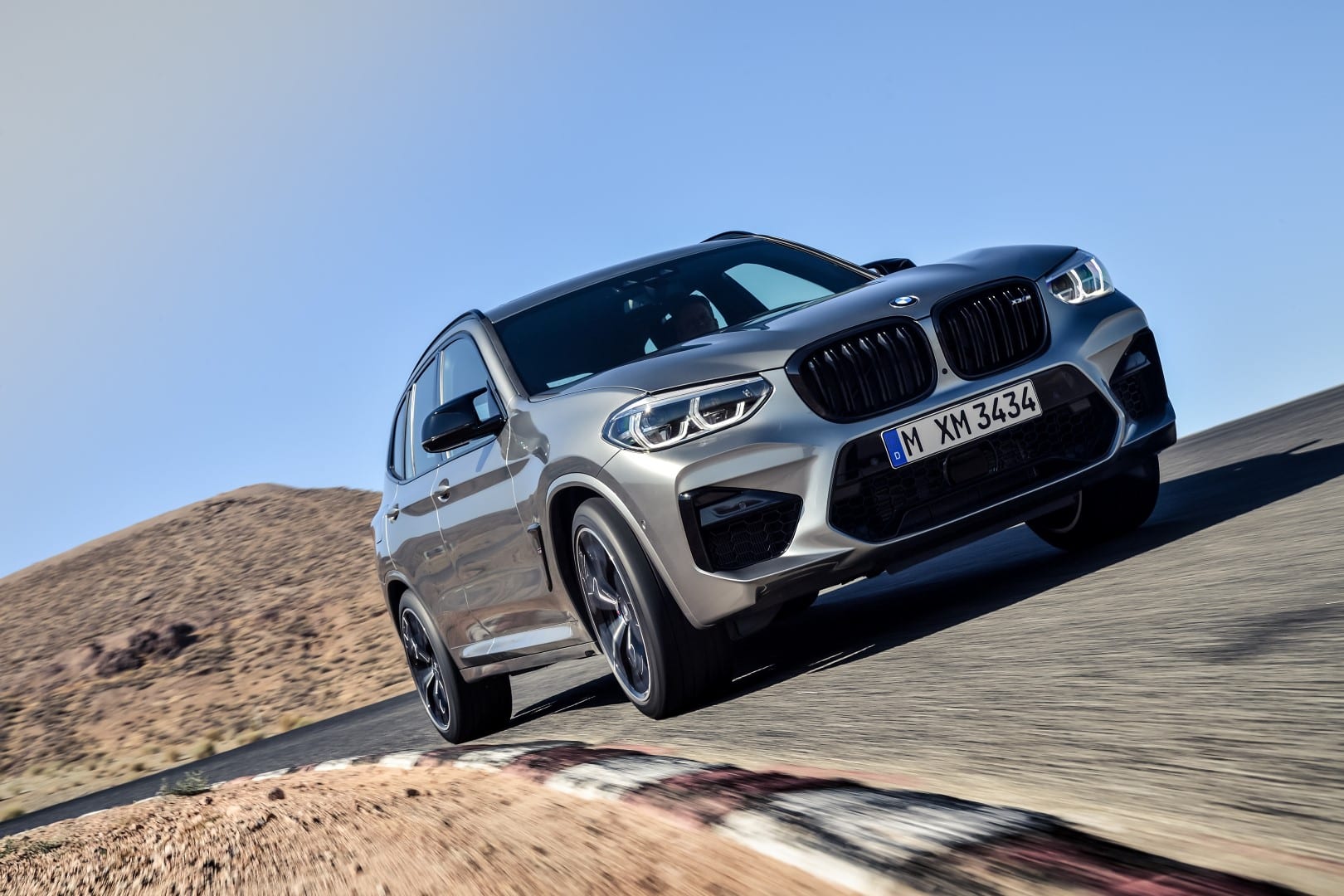 In lieu of regurgitating the press release, I chose to post some excerpts from it instead. You know, like Mr. Skin, I’m skipping to the good parts.

Powered by the high-revving, 473 hp S58 3.0 liter 6-cylinder M TwinPower Turbo engine… []. For those who want the ultimate in performance, both the X3 M and X4 M will be available in 503 hp Competition versions.

Holy toots, because M wasn’t expensive, powerful, exclusive, or stupid enough, there is the COMPETITION version. Surly it includes a driving lesson from Alex Zenardi.

Obligatory Made in USA statement.

The top speed of all models is electronically limited to 155 mph. If the optional M Driver’s Package is specified, the limit rises to 174 mph for the X3 M and X4 M and up to 177 mph for the Competition models. 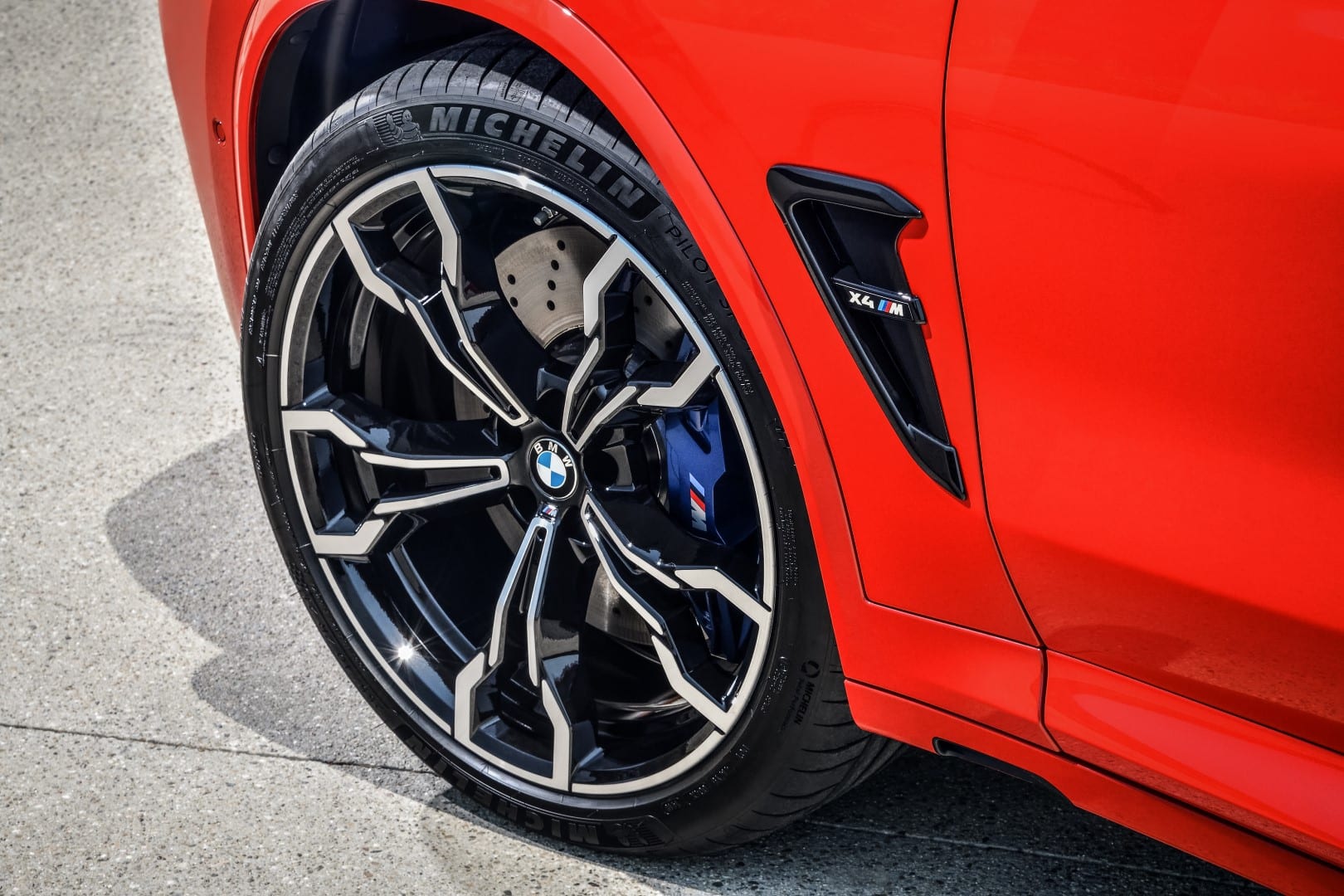 engine’s track-tested cooling system has been designed to work with its increased levels of performance and includes one large central radiator and two smaller radiators positioned on either side of it.

Those of you who have ever owned a BMW with more 80,000 miles on it should chuckle at this statement.

Electrically controlled flaps help to produce the rich engine note for which BMW M cars are renowned. The nature of the soundtrack takes its cues from the selected engine mode; standard setting, SPORT or SPORT+. Standard specification for the Competition models includes the M Sport exhaust system, which gives the engine a pleasingly sonorous tone, especially when it is being pushed hard and at high revs. Its continuously variable exhaust flaps create a particularly broad range of sound.

Yea, it’s got a fancy muffler.

It has shocks. There was something about fancy electrical steering, too. I’m sure the owner of an E36 M3 will feel right at home.

The drilled, inner-vented brake discs measure 395 millimeters (15.6 inches) in diameter at the front and 370 millimeters (14.6 inches) at the rear. The compound design combines the cast-iron brake discs with aluminum hubs, giving the brakes excellent feel, a low weight and increased thermal stability.

I am shocked and disappointed that carbon ceramic rotors are not available, not even on the Competition models, which clearly NEED them.

Of course, because run-flats suck. No word if a spare tire is included or if you’re just hosed when you get a flat. 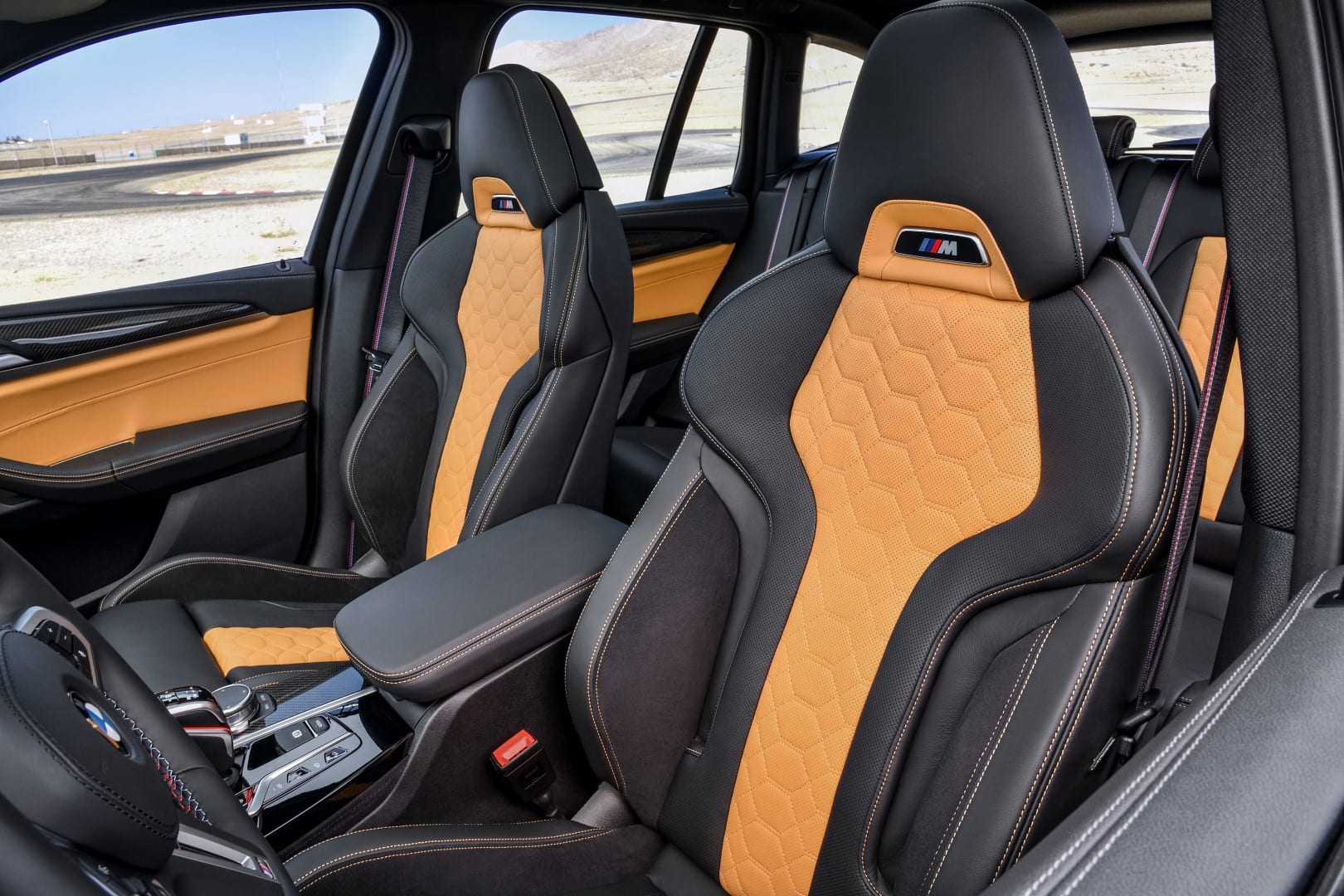 The signature M gills are integrated into the Air Breathers on the front fenders. The exterior mirrors’ special M design brings a reduction in aerodynamic drag. A model-specific rear diffuser, flanked by a pair of exhaust tailpipes on either side, distinguishes the individually designed rear bumpers of both new M models.
Atop the first-ever BMW X3 M and BMW X4 M models’ rear hatch is an M-specific roof spoiler. The exterior color palette for the four high-performance models set them apart from the standard versions of the BMW X3 and BMW X4. The front and rear bumpers, the wheel arches and the edges of the side skirts are painted in body color, replacing the usual black bordering.

There is a choice of seven exterior colors for the firs-ever BMW X3 M, BMW X4 M and Competition models, including the new shade Toronto Red metallic and – also exclusive to M cars – Donington Grey metallic. The BMW X3 M Competition and BMW X4 M Competition models come with a number of distinctive design features to bring out their exclusive character, including a High-gloss Black finish for the BMW kidney grill surround, exterior mirror caps and M gills (and the rear spoiler of the Sports Activity Coupe).

Standard equipment on the Competition models includes 21-inch M light-alloy wheels in polished Black and an M Sport exhaust system with tailpipes in Black Chrome, along with specially designed door sill plates and model badging. The optional M Carbon exterior package (expected to be available from August 2019), will feature design elements in carbon fiber-reinforced plastic (CFRP) for the front air intakes, the air blades in the front apron, the rear diffuser and the exterior mirror caps. On the BMW X4 M and BMW X4 M Competition, these elements will be joined by a CFRP rear spoiler.

The unmistakable M-style cockpit design additionally includes an M-specific instrument cluster, an M leather steering wheel and a restyled M selector lever. The BMW X3 M Competition and BMW X4 M Competition bring further exclusive touches to the interior with their M Sport seats and the model nameplate on the center console. Although the interior appears firmly focused on a sporty driving experience, it still retains the versatility for which BMW X models are known. Both models come as standard with a 40:20:40 split-folding rear backrest, enabling luggage capacity to be increased when needed.

TL:DR. If you read it, could you please tell me what this says in two sentences?

With their signature red needles and white illumination, the classic circular instruments in the black panel instrument cluster are a classic characteristic of BMW M models. M-specific display information also contributes to the cockpit’s racing flavor.

Driving Assistant Plus extends the helping hand even further. Additional elements of this package include the Steering and lane control assistant, the Lane Keeping Assistant with active side collision protection, the evasion aid and the Crossroads warning, Wrong-way warning and Front Cross Traffic Alert.

The Parking Assistant Plus in the BMW X3 M and X4 M enables automatic selection and use of parallel parking spaces. These parking spaces are detected by ultrasonic sensors as the vehicle passes them. The Parking Assistant function is activated at the touch of a button on the center console. The system then takes care of the acceleration, braking, steering and gear changes necessary to maneuver into the space.

There are also parking assisting things. Oddly, it does not say if the new X3 M and X4 M have rear view mirrors, which is what I’ve been using as a parking assist for decades.

Seriously, if you have trouble parking a BMW X3 you shouldn’t be driving.

Other specs: these weight around 4600 pounds and are bigger than the original X5 in every dimension. 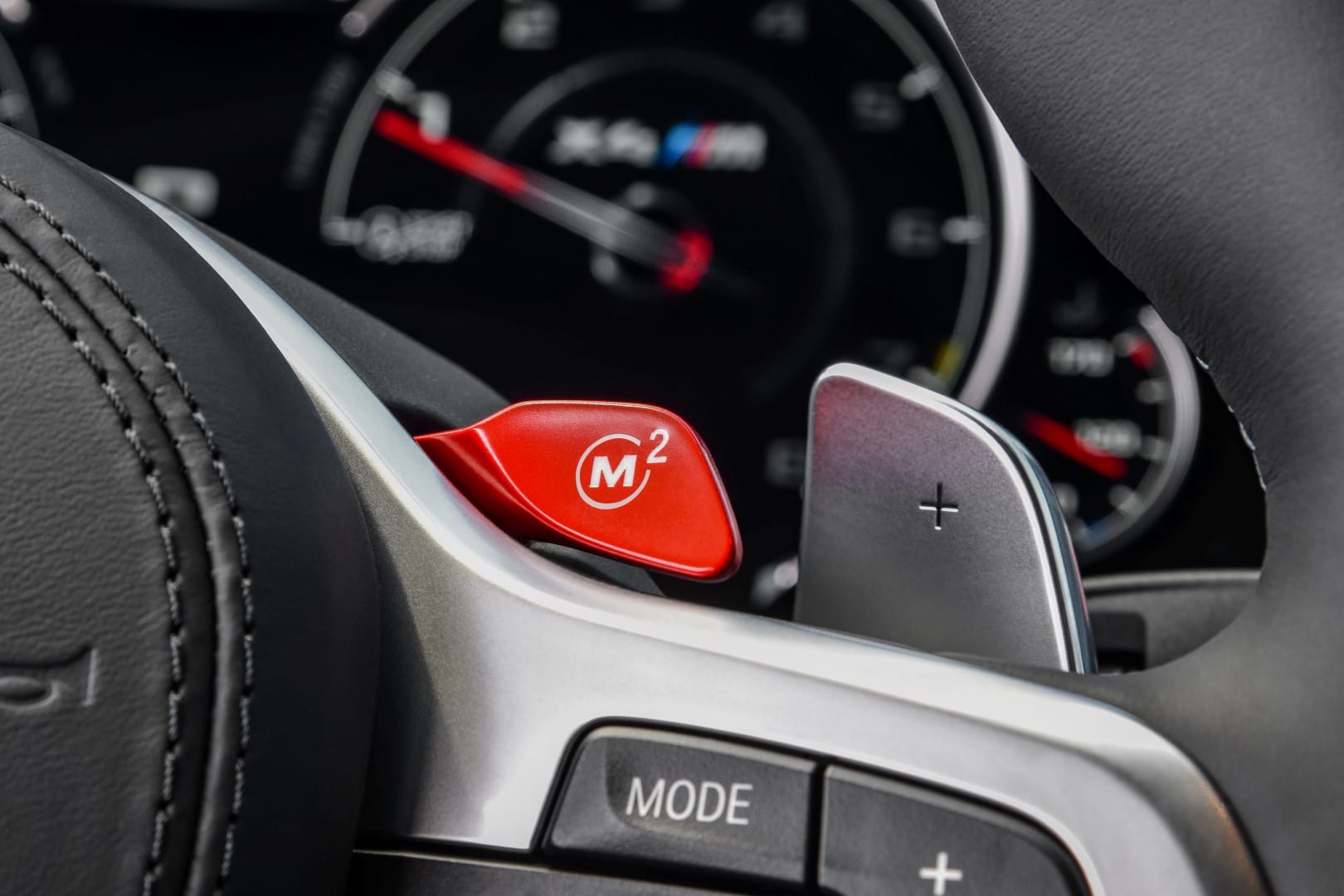 M squared button. For when more M is needed.