Your turn to vote for the Hooniverse Car of the Decade

We started this silly site ten years ago. In that time, we’ve covered a ton of topi- okay I can’t finish that sentence. It’s been mostly Craigslist finds, LeMons racing, and the occasional new car review mixed in. But each year, we band together to shine a light on a beacon of Hooniversal wonder. That’s when we crown the title of Hooniverse Car of the Year (HCOTY) upon one deserving machine. The editors of the site nominate a range of vehicles, and you, dear reader, are the ones who cast the vote.

This time around, the nominees have long been determined. We’re pulling from all the past HCOTY winners to create a pool of excellent rides. And from one of these will we find our Hooniverse Car of the Decade. So let’s get on with it, right? I’ll lay out the nominees and there will be a poll at the end of this post. Cast your vote there, and when we ring in the New Year we will have a Hooniversal Champion. 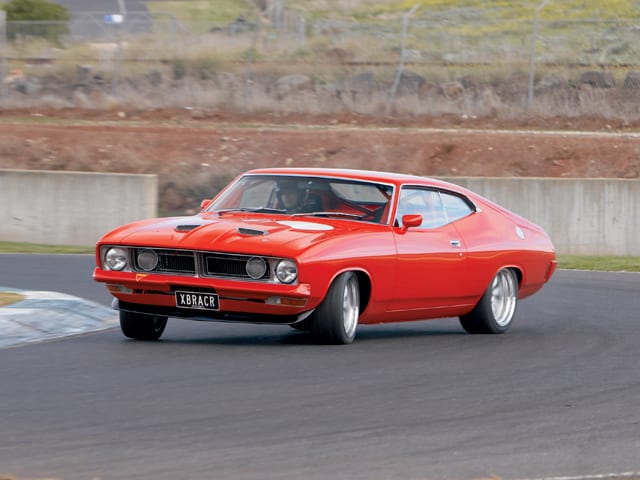 I’m pretty sure it was Mitch’s idea to have a HCOTY. And then he nominated this gorgeous machine; actor Eric Bana’s stunning Ford Falcon XB. The car was built up. Raced. Crashed, hard. Then rebuilt again. It was a great nomination and a very deserving HCOTY winner. This is the car that started it all, with respect to this year-end tradition. 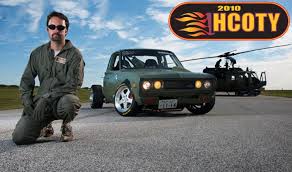 Woo boy, did we have a heck of a time for HCOTY round 2. A well-stacked field yielded to the power of Chad Copeland’s Datsun 620 Drift Truck. He rallied his troops and they came out in force to make their votes count. The drift truck won that year, but I think some long-time regulars are still salty about it.

Rising from the dead? 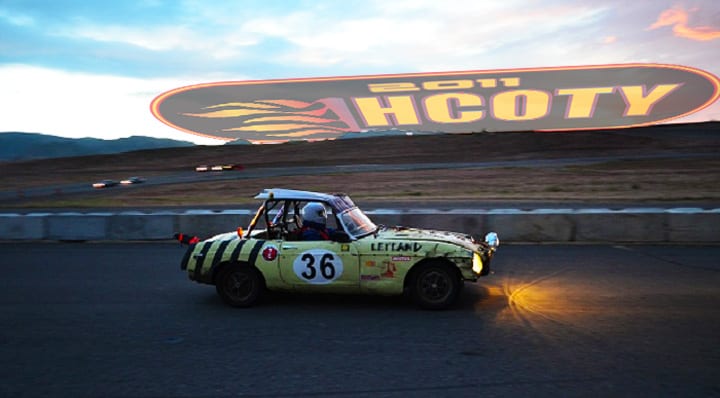 I’m going to copy and paste the text on the nominee post for this one:

Name another car in any race series that gets to (and usually from) the race under it’s own power and typically pulls a covered wagon it’s own support trailer and keeps spare engines strapped into the co-pilot seat.

According to the “Official Rules” put forth by the Founding Fathers of this fine establishment:  The primary rule of HCOTY is that the car has to, in some way, embody the true spirit of Hooniverse: responsible hooning, a genuine passion for cars, a love for the antiquated, the oddball or the obscure, and a healthy absence of common sense.

WELL, THAT PRETTY MUCH COVERS IT.

Despite a spectacular cartwheel, getting rear-ended and many other bumps, bruises and technical difficulties along the way, the Killer ZomBee refuses to quit!  After many miles both on, and off the track, the British Leyland-that-could finally took home the coveted IOE trophy earlier this year.

In my humble opinion, the car is not what this HCOTY nomination stands for.  The car is merely the vessel in which our very own Sparky and a fantastic group of car nuts lives out their dreams, one weekend at a time.  Here’s to Team Killer Bees on a great year and many more to come!

Electricity comes out on top 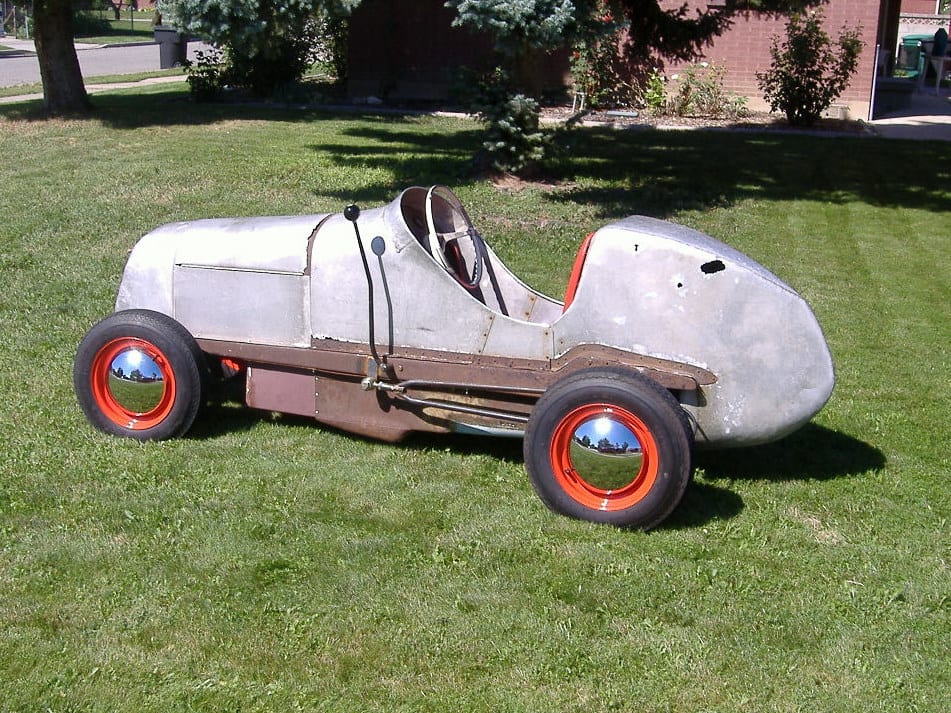 One part 1979 EZ-GO Golf Kart. Another part late 1930’s Midget race car. Mash them together and you have one hell of an HCOTY winner. This machine is best known as “Scott’s EV Midget”, and it’s an awesome build. You can read Part 1 of the story here. The rest is probably lost to the bullshit site transfer that happened during our redesign where we lost tons of old stories and images. Yes I get upset about this every single day… but I digress. LOOK AT THIS AWESOME MIDGET!

The year there was a tie… 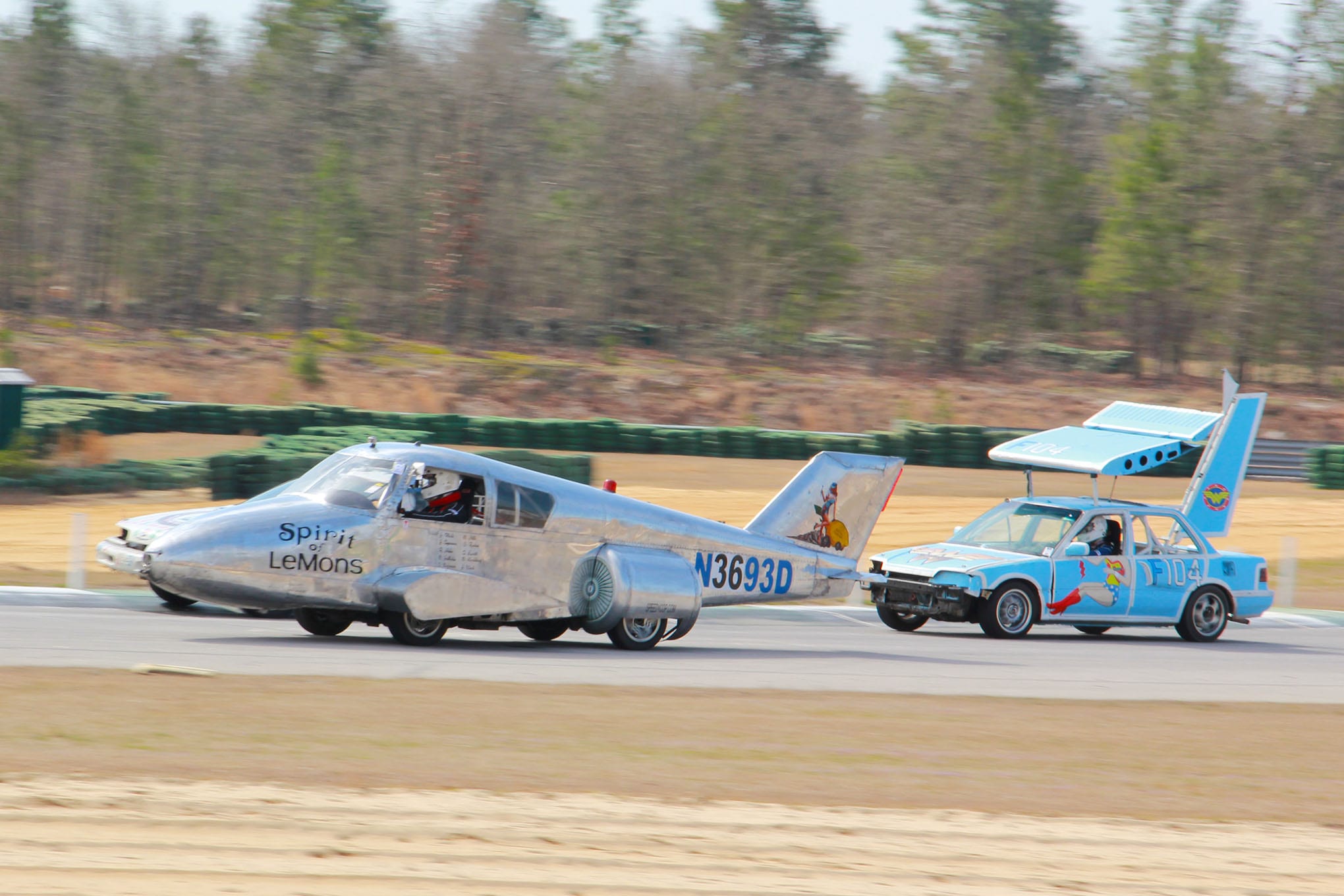 Hooniverse Hero Speedycop is the best kind of crazy person. One year, for the 24 Hours of LeMons, he turned a derelict Cessna airplane into a road-going (and street-legal!) race car. This man is in the (yet-to-be created) Hooniverse Hall of Fame, for sure. And this is one of his best builds. 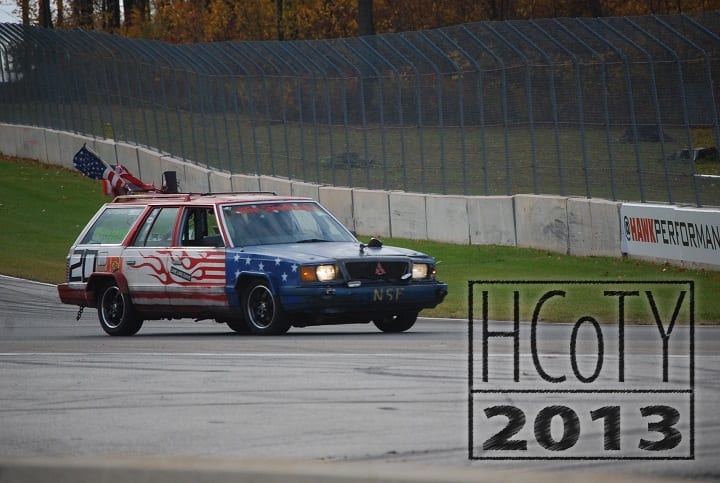 The Cessna tied against.. the Worst Car of All Time. I’ll let Eric Rood’s words explain why it was nominated in the first place:

Rather than recap each race and transit, here is an extremely brief overview of the highlights and lowlights:

The best Gremlin ever 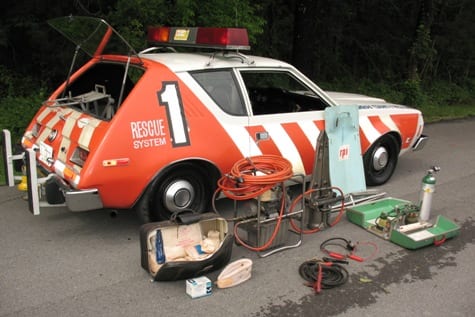 A Gremlin. Won something. And it makes sense that it would win it here. The Gremlin Rescue System vehicle was designed to get people out of crashed cars, and quickly. It came packed with the Jaws of Life and a stretcher. And one of its intended uses was track-side safety vehicle. Pretty ugly, yet pretty awesome all in one package. 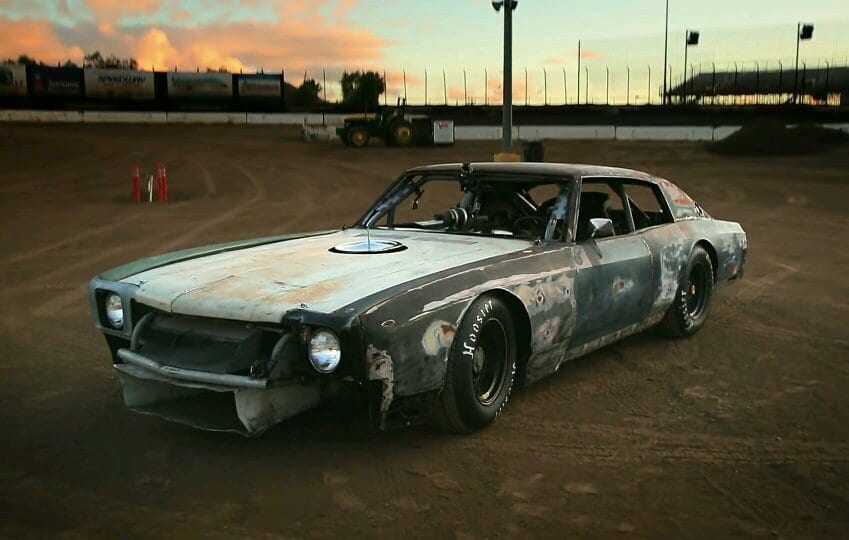 I nominated this one… and I still stand by it. Roadkill’s NASCARlo is such a wonderful machine. The delightful fiends at Roadkill took a ratty 1970 Monte Carlo body and plopped it atop a late-model stocker race car. This makes it fast, ugly, terrible, street legal, and awesome all in one go.

The voting that year was heavily outweighed when Roadkill posted a link to our post on their Facebook page. Regardless, NASCARlo won (and I was happy with the outcome, haha). I still owe Finnegan a six pack because we said they wouldn’t get it fixed after crashing it… but they did. Because Roadkill.

Tanshanomi nominated a motorcycle. There was no way a motorcycle was going to win Hooniverse CAR of the Year. But then the votes started rolling in, and this gorgeous hunk of machinery captured the crown. Builder Mehmet Doruk Erdem wanted a motorcycle that evoked thoughts of 1950’s streamliners. The BMW Alpha manages to look both old and new at the same time, and it’s one hell of a wicked creation.

Editor’s Choice: A special award for a special vehicle 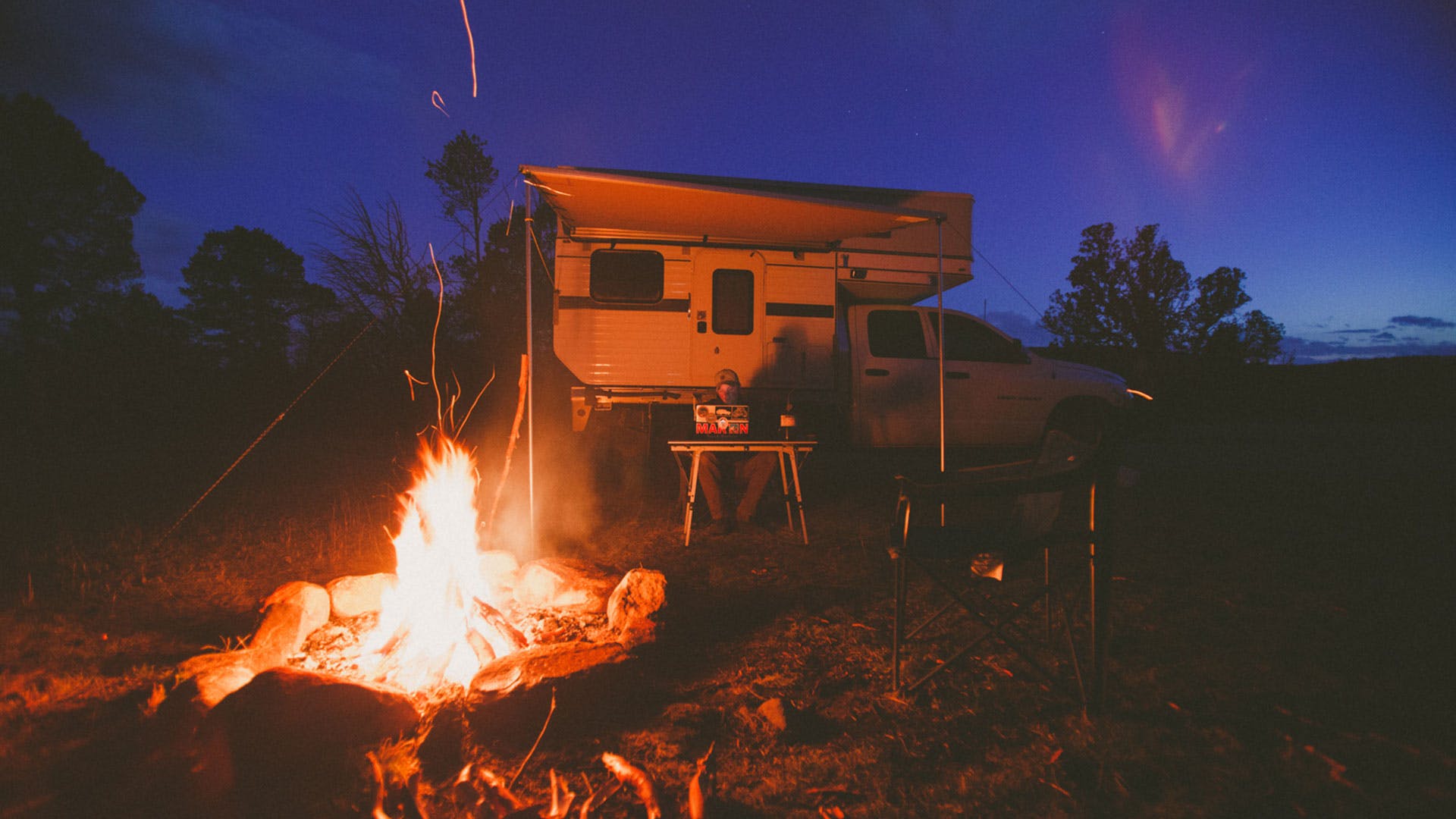 Remember that time when Zach Bowman sold off most of his stuff and stuffed his young family into a small RV? We sure do. Bowman’s Odyssey was the nearly year-long saga of Zach and his family spending a long time on the road. A stout Dodge Ram served as travel companion, home, nursery, office, and so much more. Though this rig didn’t outright win HCOTY in 2016, it did capture the hearts and minds of the Hooniverse front office.

Bradley Brownell decided it should capture an Editor’s Choice HCOTY award. And I think that means it deserves inclusion on this list here. Hell, it might even win the whole thing…

What a swell-o yellow thing 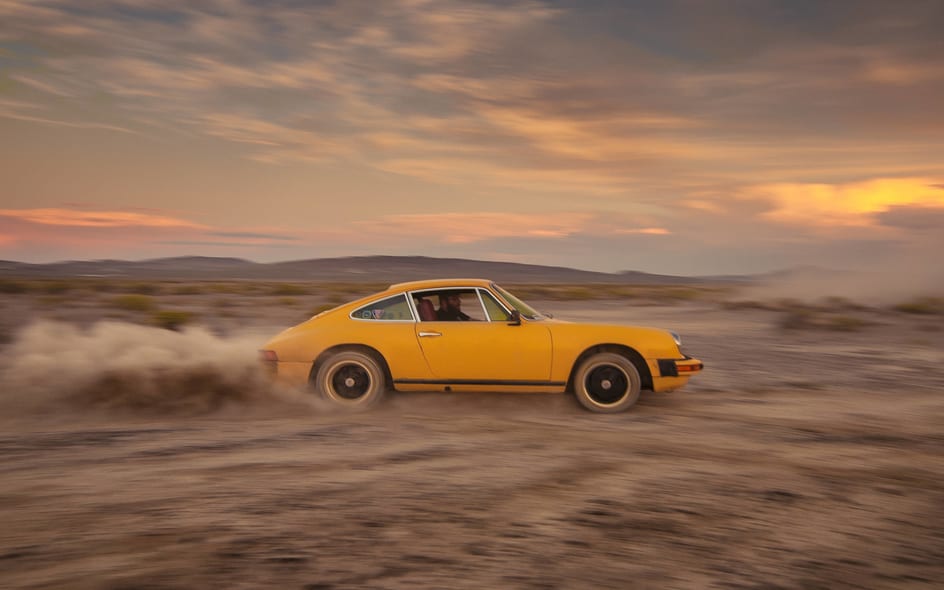 Speaking of Brad, his own 1976 Porsche 912E won HCOTY back in 2017. Mr. Brownell loves his super Beetle and drives it everywhere. In fact, he hates flying so much that he recorded many a mile behind the wheel of this delightful machine. It recently had a full engine rebuild and should be seeing more road time very soon.

During its HCOTY contest, the Porsche captured 37% of the vote. The next closest competitor snagged just 18%. This was a decisive victory. And for good reason. What a lovely old thing…

Check out this fatty… 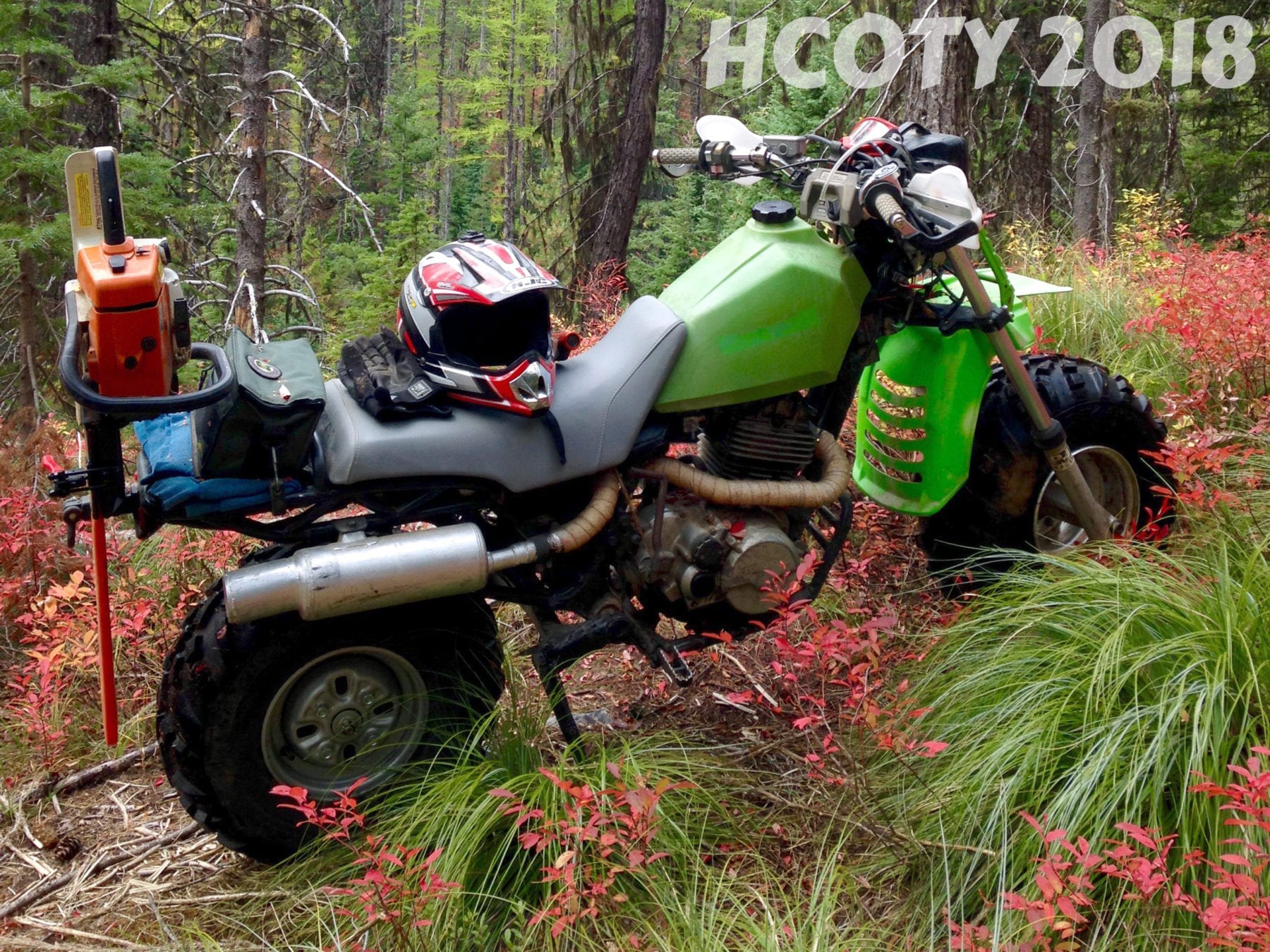 I love the Fat Hippo. This is the second motorcycle to capture our HCOTY title. And it deserves it, no question. You can read the full nomination post here. But the gist is that the builder scraped together parts to make the bike he wanted. The end result is awesome. And it’s the exact sort of vehicle that rightfully gets to wear the HCOTY crown.

On to the voting: