This the Jeep Wrangler Rubicon 392 …concept

There was no chance Jeep was going to sit this one out. Ford is on the edge of its Bronco reveal, and it’s clearly taking direct aim at the Wrangler. So to counteract some of that buzz, Jeep is showing off a new version of its off-road mainstay. Say hello to the Jeep Wrangler Rubicon 392, but don’t get too attached because (deep sigh) it’s just a concept. Let’s dive into the concept specs before we talk about why this is dumb. Not the truck, but the idea of teasing it as a concept.

Jeep takes the Wrangler four-door and stuffs a 6.4-liter V8 engine under the hood. That gives us a Wrangler ready to rip with 450 horsepower and 450 lb-ft of torque. That’s the same horsepower, albeit less torque than the Ford Raptor, interestingly enough. With the Jeep, the resulting 0-60 trip happens in under five seconds. Which, if we’re being honest, is probably properly terrifying in a Wrangler… both good terrifying and the bad kind.

Beyond the engine, Jeep has given this concept 37-inch Mud Terrain tires, the familiar 8-speed automatic, and 3.73 gears. There’s a two-mode exhaust system to keep things sort of quiet or make it all louder. And the outside gets very cool half doors and unique bronze-painted tow hooks. Add on the two-inch lift kit, along with those beefier tires, and you have a Wrangler with 13.25-inches of ground clearance, 34-inches of water-fording capability, an approach angle of 51.6 degrees, breakover of 29.5 degrees, and a departure angle of 40.1 degrees. 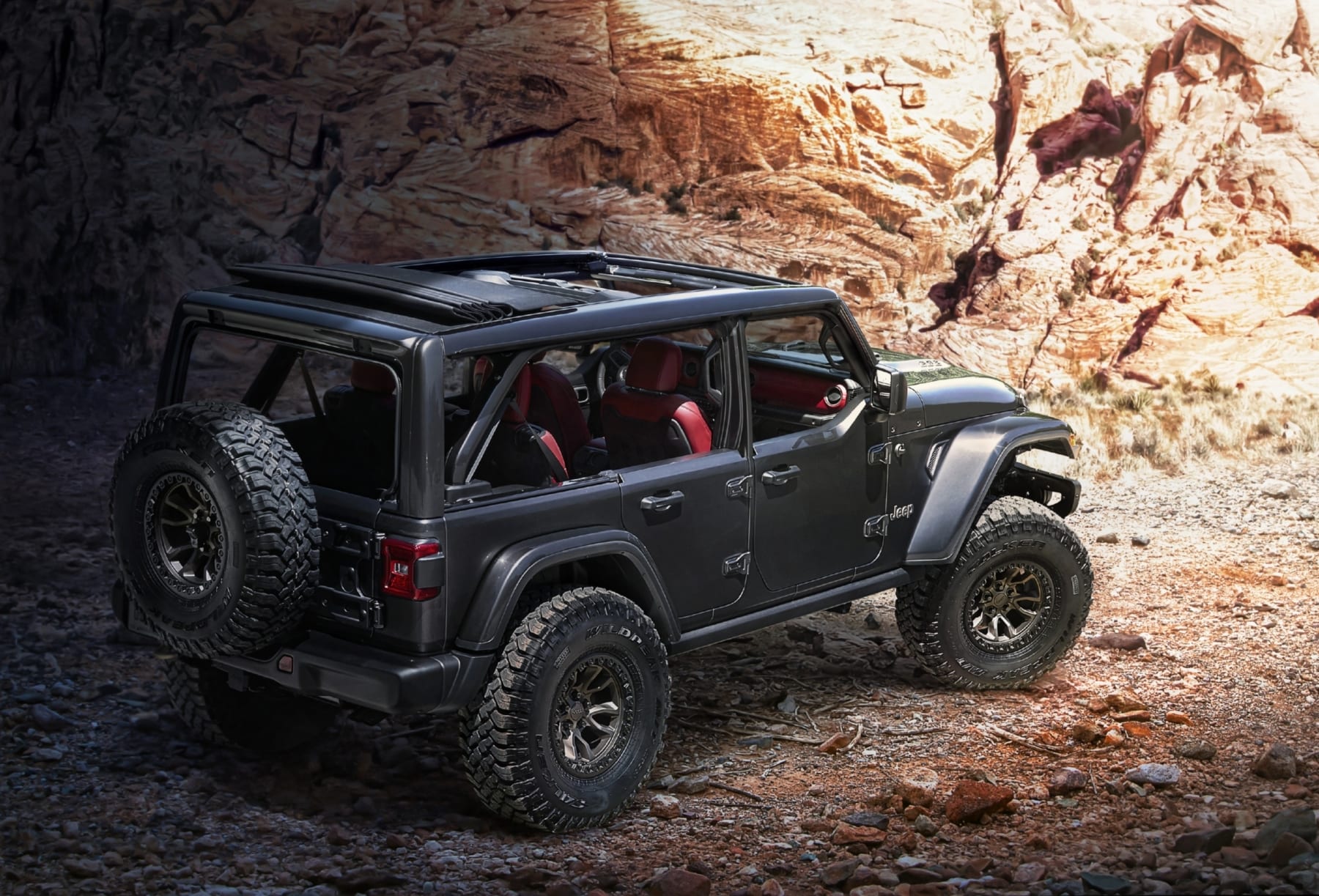 So all the specs are wonderful. This is the sort of Jeep well-to-do Wrangler fans would build on their own through the aftermarket. There are companies that swap V8s into Wranglers. The cost is high, of course. And that’s probably why Jeep hasn’t gone all-in here on this Rubicon 392. Because that means we’re entering a world of Jeep Wranglers that likely cost well over $70,000. Does that mean Jeep won’t turn this concept into a production vehicle? Certainly not, as FCA has a habit of building cars that make little sense to the average consumer, and then turning around and selling every single one of them. But is the timing of this one most certainly to try and keep the eyes of potential Wrangler buyers on the prize as Ford gets set to drop a Bronco bomb? Of course.

Will it work? For that, you’ll have to wait and see what Ford has in store for the Bronco.

For now, though, I think the idea of a V8-powered factory-built Wrangler sounds like the sort of lunatic fun I can get behind. If people pay crazy prices for the Ford Raptor, why wouldn’t some of those shoppers buy this one instead?