Once upon a time, Jeep’s Wrangler was simple, off-road capable transportation. It wasn’t complicated. It didn’t have a lot to it. Over time as consumer demands became more intricate and Jeep saw a market opportunity in moving it to a more mainstream vehicle, things got more complicated. Over time Jeep introduced improved powertrains (let’s not talk about the 3.8L) which has led us to today. With the availability of a 2.0L turbocharged four-cylinder, the Pentastar V6, and the EcoDiesel, options are better than ever. But for as long as I can remember, people have been swapping V8s into Jeeps. CJs even came with them.

Though the EcoDiesel (now available in the Gladiator, too!) is a fantastic, torque-rich powerplant that (from what I’m told) complements the Wrangler’s personality beautifully, it’s not for everyone. The V6 is, but bigger is apparently still better. And so here we are, with a teaser picture from Jeep that, if you hadn’t looked close, you could have missed the key point.

We see what looks like a rendering of a Wrangler with a hood scoop and imagery that gives off the essence of speed. As it should: emblazoned on the hood is what appears to be the “392” stamp. Which, as all of us who know FCA’s long-running Hemi engines know, is the brand’s 6.4L SRT engine that’s available in the Grand Cherokee SRT8, Charger and Challenger, Durango SRT, and so on. It’s a powerhouse of an engine and comically overpowered for what most Wrangler buyers would ever need. But, hell, who doesn’t want to hear a huge V8 bellowing as you blast down a trail with the doors and roof off? The teaser also seems to indicate the availability of metal half-doors.

It was only a matter of time. Brands like AEV have been swapping Hemi V8s into Wranglers seemingly forever. They also built the amazing Brute, which the Gladiator seems to have pulled quite a lot of influence from. Both of these are good things. A 6.4 or even 5.7-powered Wrangler was always a talking point for what people wanted to see from the Wrangler but it was never a production reality. Possibly until now.

I doubt it’s a coincidence. Ford is slated to unveil the new Bronco this Monday so it’s possible this is a deliberate dig at the Jeep’s most direct competitor. Especially so considering “leaked order books” indicate the only Bronco engines will be the 2.7L and 3.5L EcoBoost motors. The current Wrangler has been on sale since 2018 and though it’s far from growing long in the tooth, it’s lost its place as talk-of-the-town with the imminent release of the Bronco. Timing is everything and FCA knows this. Jeep throwing the 392 in the Wrangler isn’t just a dig at Ford; it’s a full-on throw-down.

But we’re not all on the same page here. Kamil  thinks that the  392, which makes 485 horsepower and 475 lb-ft of torque in the Charger is a bit much. It’s got a narrow frame and two stick axles. If you want to see how badly something like that can drive, see last gen G-class. My only worry is the inevitable sky-high price. But aside from that, I’m all for it. The name even has a good ring to it: SRT Wrangler. It’s like it was meant to be.

If you want your Hemi-powered Wrangler now, head over to Dakota Customs. That sure fits well in there… 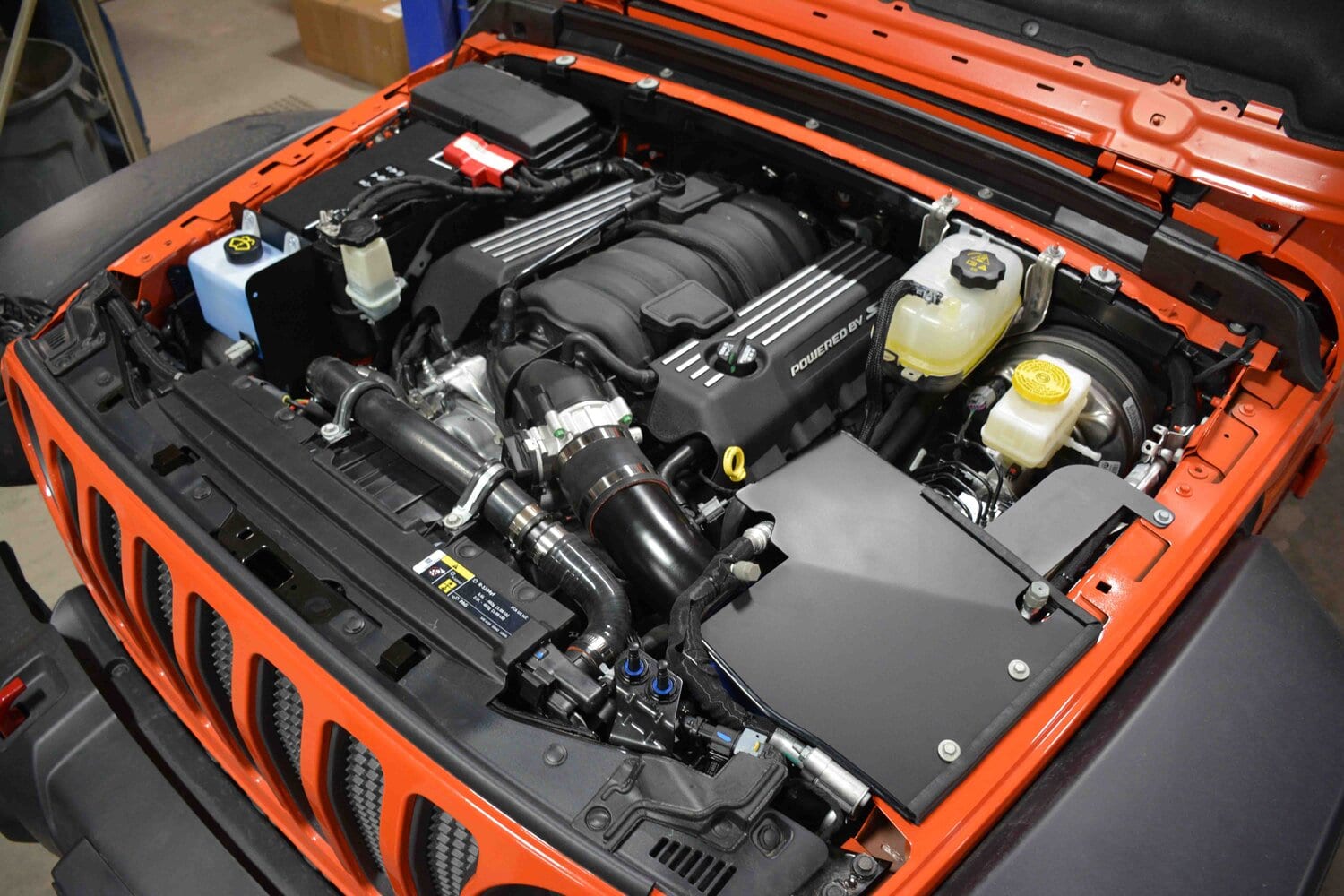