The Toyota Land Cruiser needs no introduction.  The legendary longevity and reliability of the Land Cruiser are known worldwide.  While most of that is focused on the 60, 70, and 80’s series Land Cruisers, the latest 200 series is still held to that standard.  The 200 series may look and feel softer than its predecessors but a more polished presentation is simply just added sophistication rather than a degradation of core capabilities. 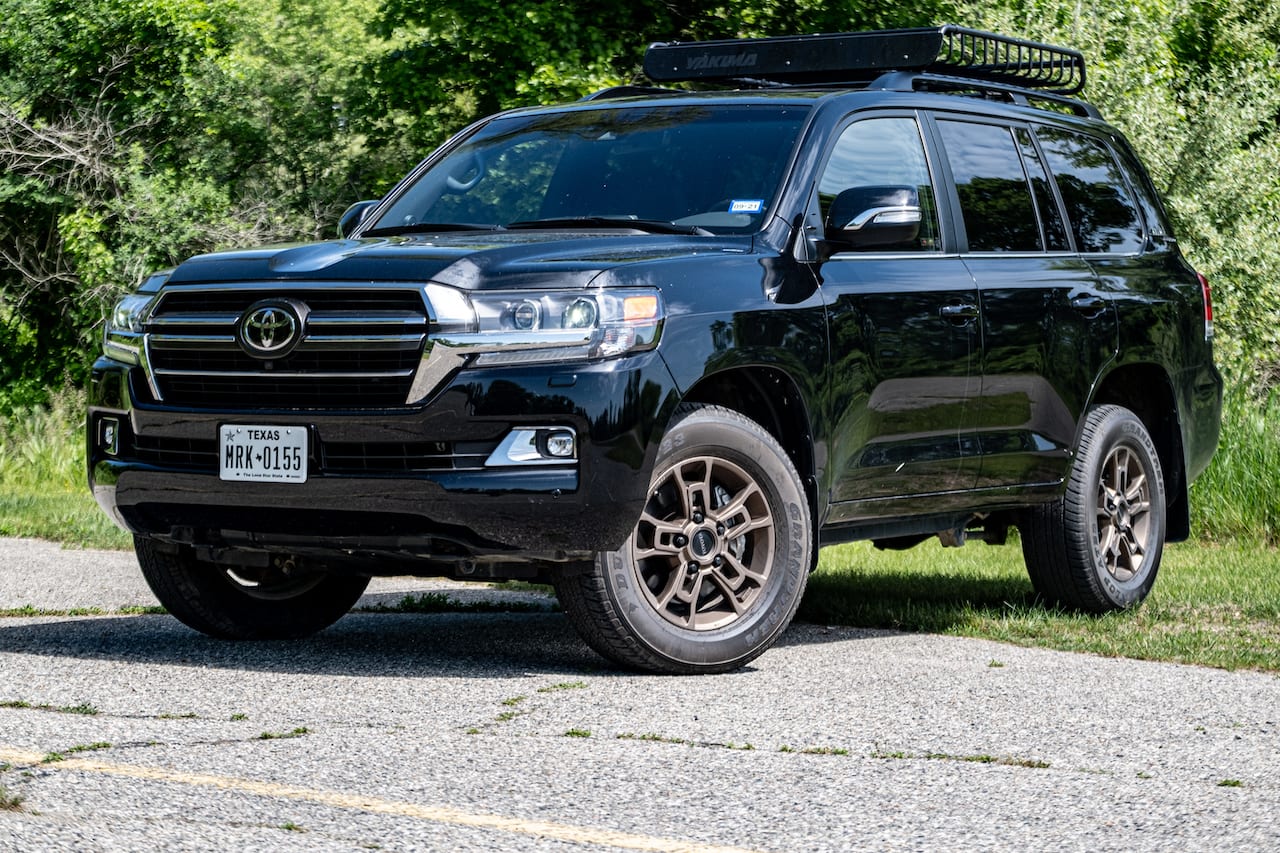 There are two elephants in the room when you talk about the Land Cruiser so let’s get those out of the way.  First is the price, second is the fuel economy.  Though, if you have no problem with the former, the latter probably isn’t an issue for you either.

I want to address these two potential issues and move on, so as to focus on the vehicle itself.  As tested, the price of this Heritage Edition was $89,239. EPA rates Land Cruiser at 13 city, 17 highway and 14 combined.  I saw 15-16 mpg in my week of mixed driving.

A few weeks before the Land Cruiser arrived  Todd and Paul from Everyday Driver reviewed a Land Cruiser and they kept asking, “where is the money”.  That thought was in the back of my mind during my time with it.  If you only drove it for a day or two, I can see where you could have that point of view.  Spend a few days with it however and the answer is easy, and I’ll get to that shortly.

Fuel economy, to steal a line, yeah it has….some.  The Land Cruiser’s fuel economy is very 20th Century.  In lands not North America, you can get a very nice 4.5-liter twin-turbo diesel engine that would ease that issue. 268 horsepower, 480 ft/lb torque, and 24.75 mpg according to the Toyota Australia website.  If you do want the diesel, there are shops in the U.S. that will do the conversion.  Plan on dropping $40-$45,000 to do it.  In the US we get the 5.7-liter V8 found in the Tundra pickup.  It is a superb motor with 381 horsepower and 401 ft/lb of torque.  It is a very smooth engine, with excellent down-low torque where you never feel underpowered.  It will even tow 8100 pounds.  But again you will pay the penalty at the pump.  But at least it takes standard 87 octane fuel rather than premium.

The Heritage Edition comes in two colors, Blizzard Pearl or Midnight Black Metallic.  My review unit came in the black which nicely offset the bronze BBS wheels, which are a Heritage Edition exclusive.  Other changes on the exterior from the standard Land Cruiser are:


It is a very small detail, but the vintage Land Cruiser badge is just so. damn. sexy!  You keep coming back to it and asking why they ever went away from it. 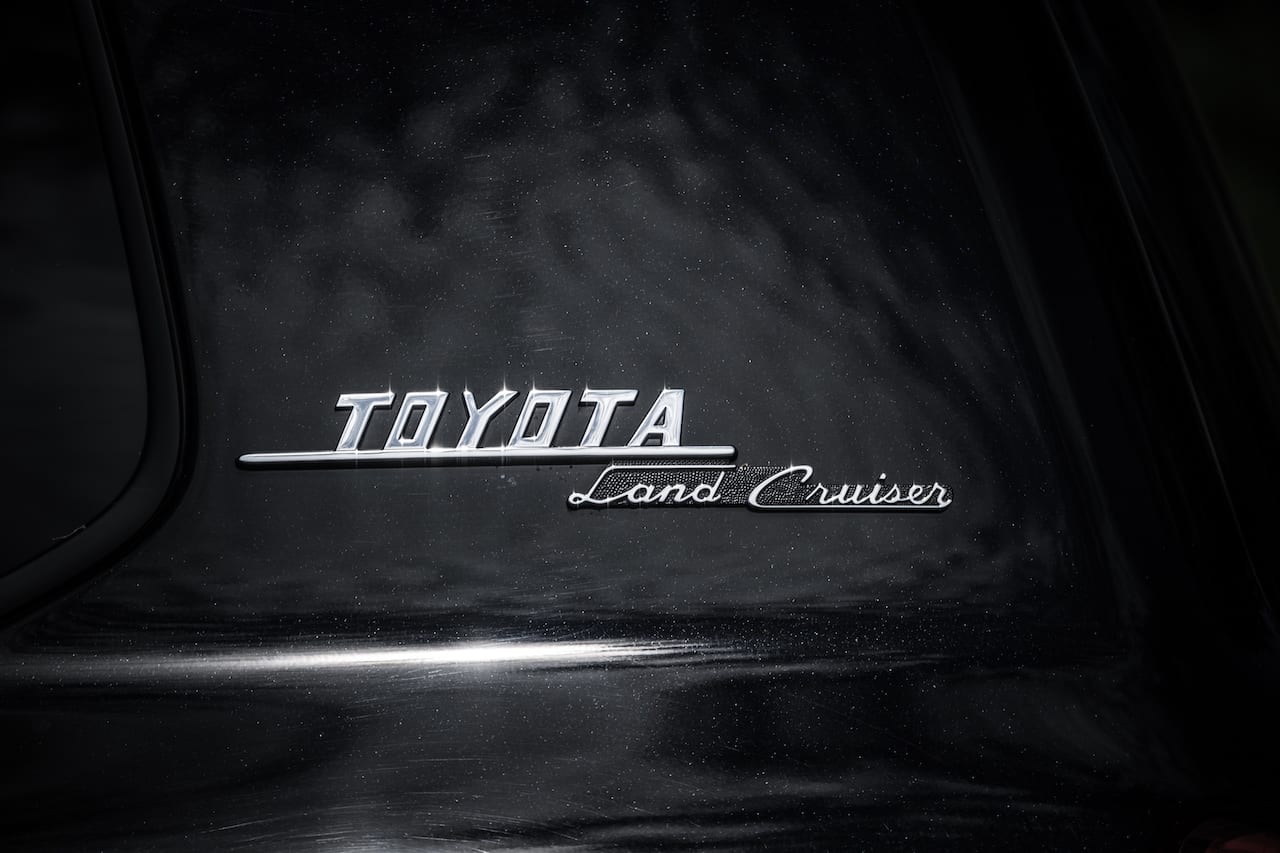 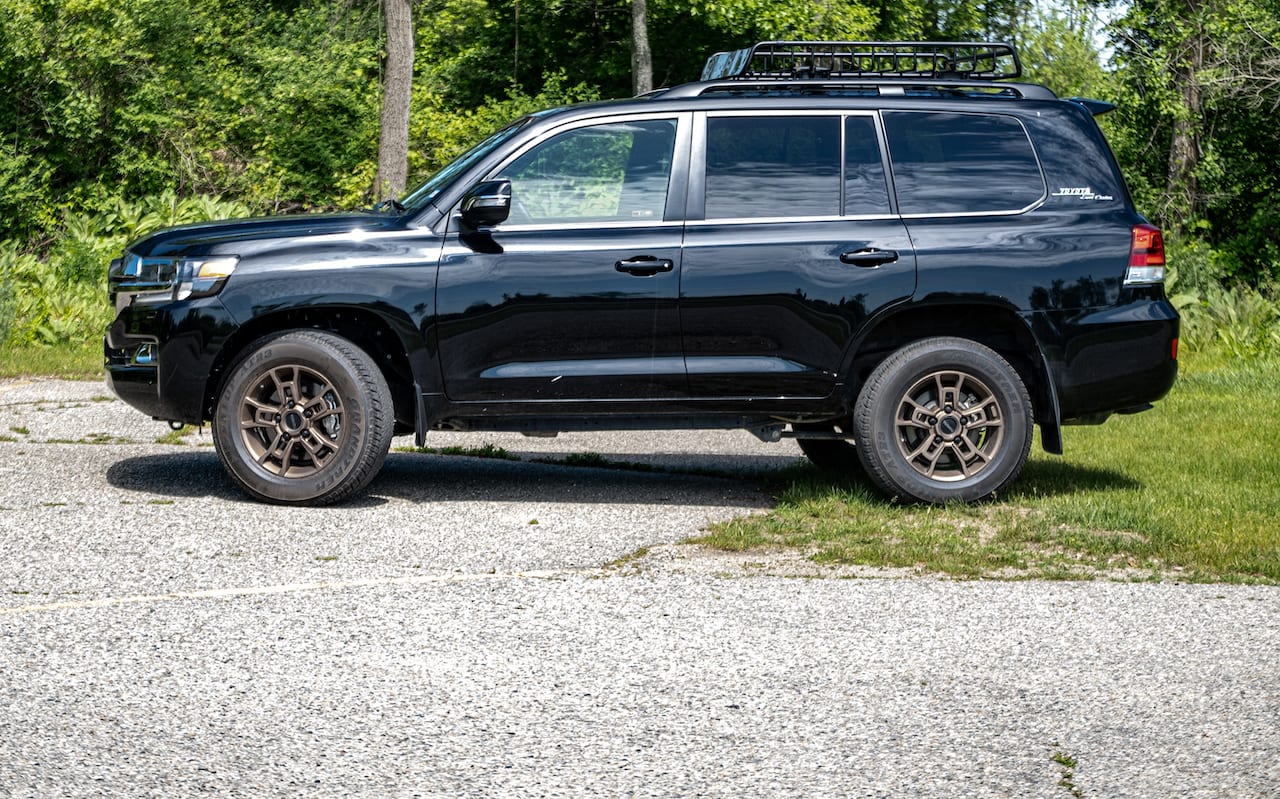 If you are not going to use it often I’d recommend removing the roof rack.  At highway speeds, you can hear wind noise coming off of it.  It isn’t helping your fuel economy.  Plus, I think it takes away from the looks of the truck.

If there is a styling element I’m not crazy about, it’s the grill.  I can’t quite put my finger on how to “fix” it, but it just doesn’t flow with the rest of the Land Cruiser.  Perhaps it’s a combination of width to height ratio along with being chrome.  Would an additional nod to “heritage” here and putting in a 60 series style grill fix that?  Maybe. 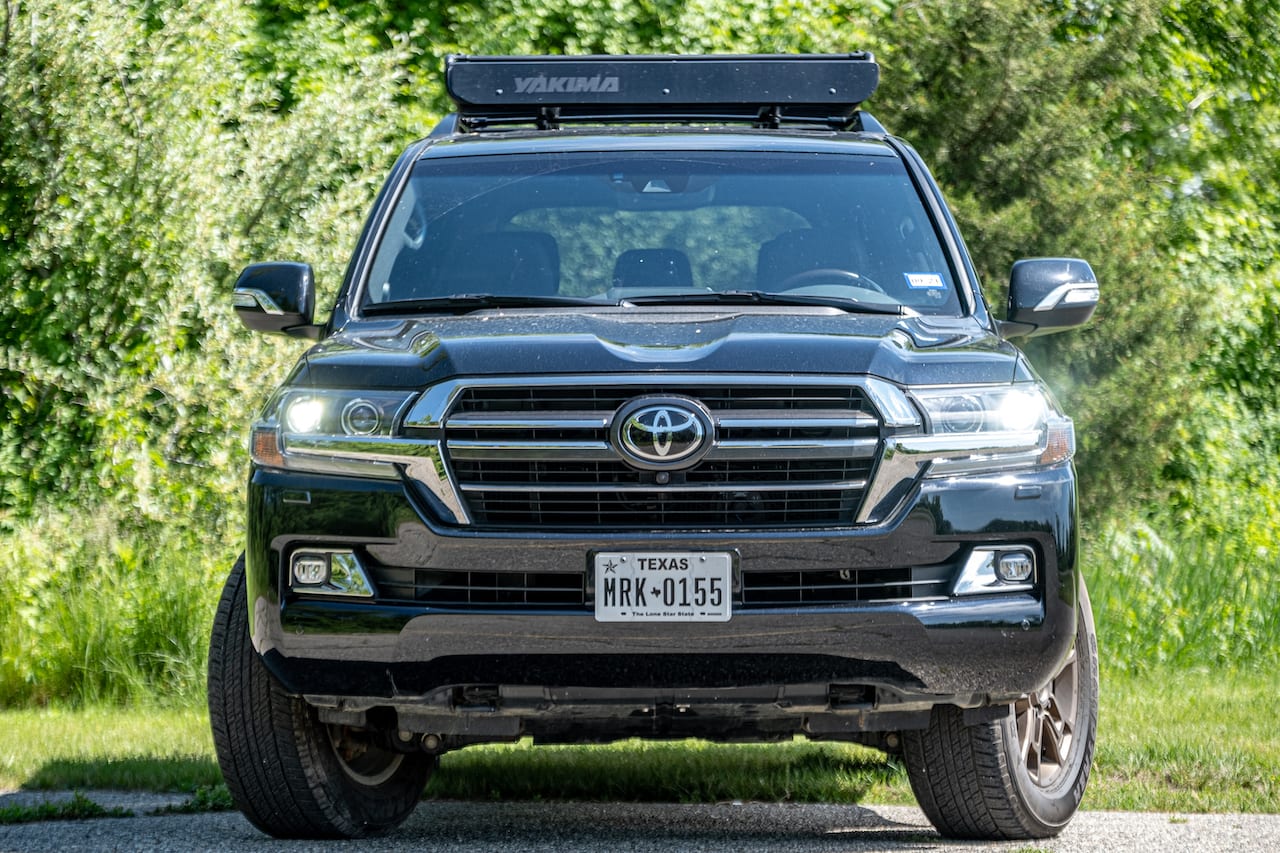 While it may seem an odd thing, other than the vintage Land Cruiser badge, my favorite part of the exterior is the rear hatch area.  The split hatch it the perfect ratio of top and bottom.  Need to drop or retrieve something in the rear, you can just open the top portion.  Want to sit at the Custard shop on Woodward and watch COVID Cruising?  Drop the bottom portion and you have a great seat to watch the action from.  Or better yet, after spending some time on a trail you take a food break and use it to sit and enjoy the surroundings of the outdoors. 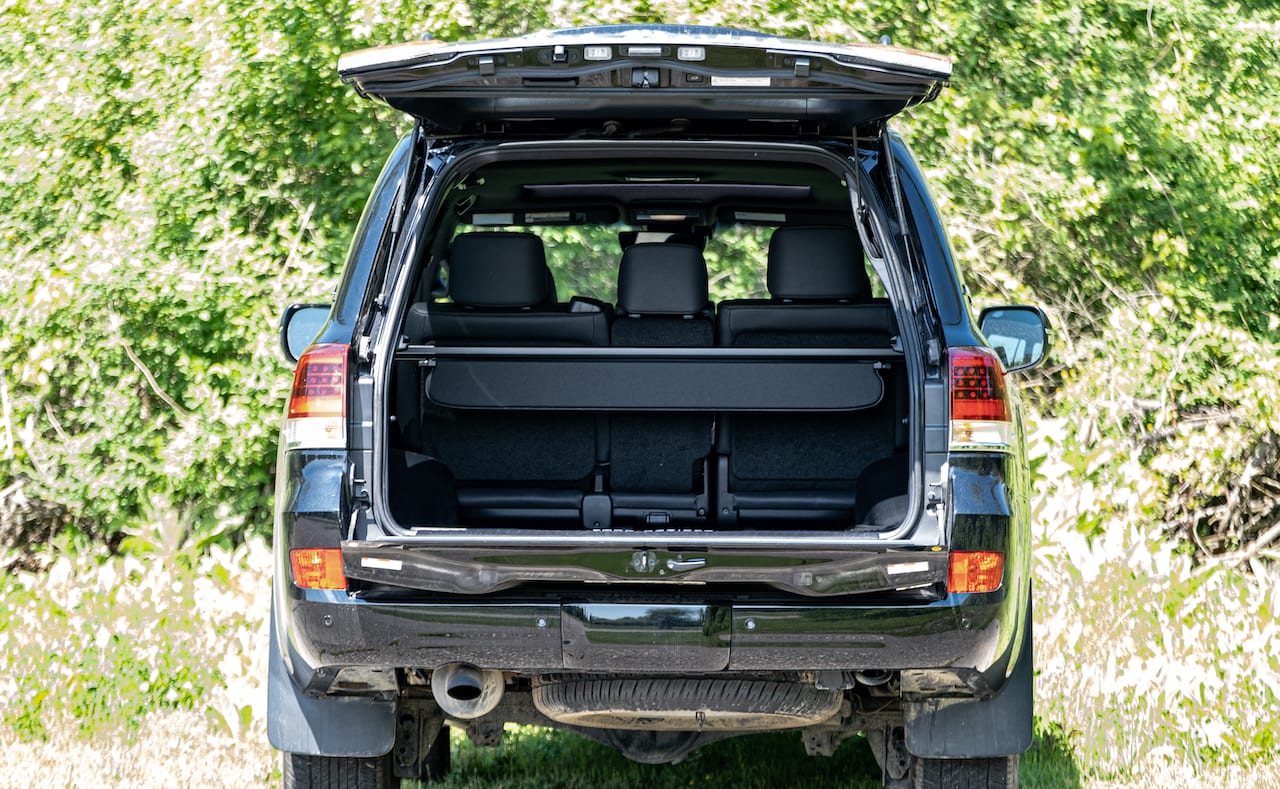 To circle back to Todd and Paul for a second, they kept talking about the materials inside the Land Cruiser as a major part of “where’s the beef, errr money”  At this price point would you expect better?  Maybe.  That said the quality of materials is not that far off from a $92,000 BMW X5 I tested last year.  They are certainly better than what you’d find in a Cadillac Escalade.  Against the Cadillac, it’s a tactile feel in that you just know the materials in the Toyota won’t look worn in 50,000 miles, whereas in the Cadillac, well, GM interiors, enough said. 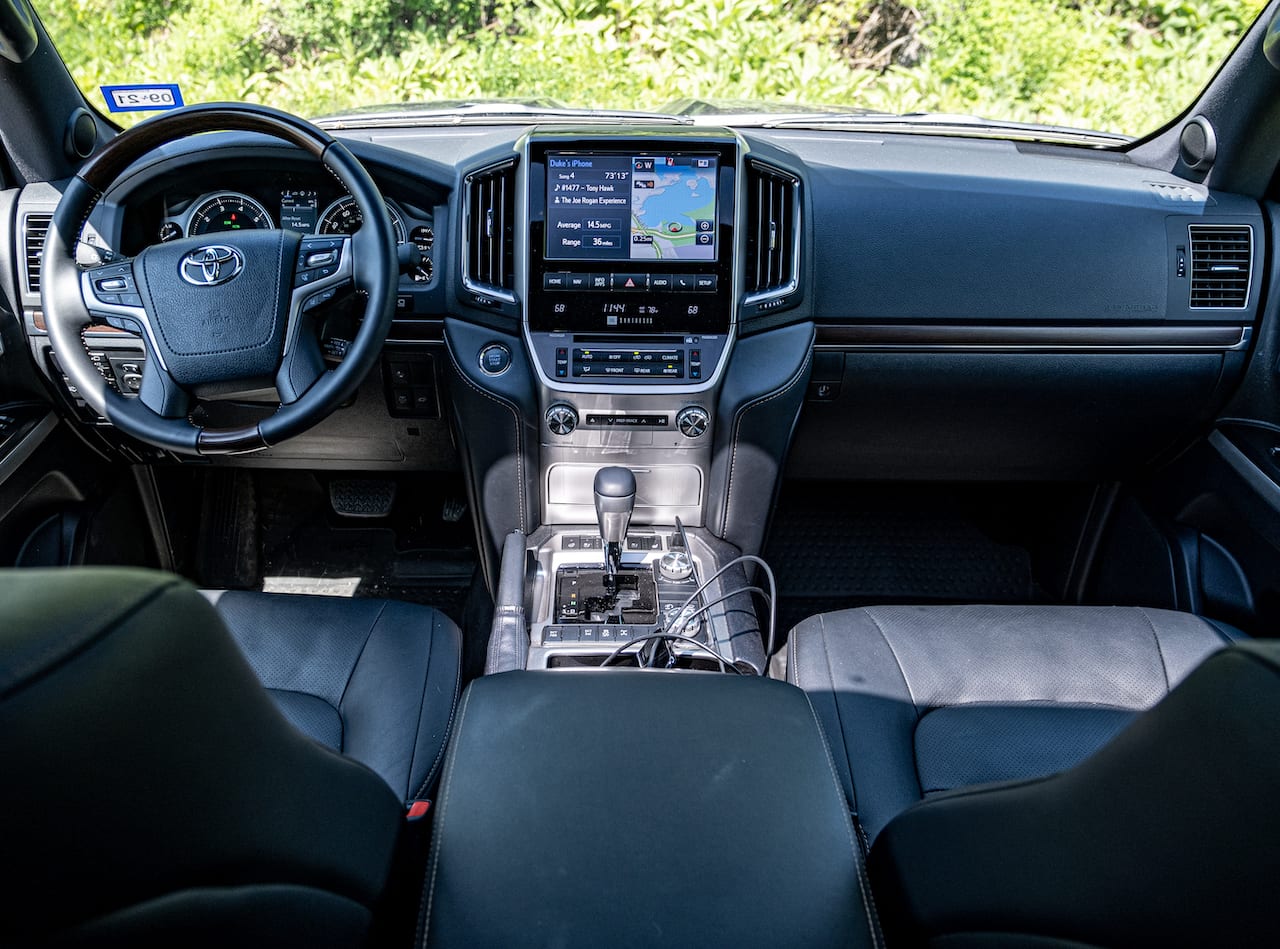 Buttons and knobs have a nice feel, the wood trim looks and feels better than what you find in most Lexus’.  In fact, the vehicle we swapped the Land Cruiser out for was an RX450h.  The wood trim in that vehicle looked and felt like a hydro dip over plastic.

There is four-zone climate control and on warm to hot days, turning on the rear system helps keep the cabin much cooler.  With the large volume, black interior, and a generous amount of glass, you need all the help you can get.  Front seats are heated and cooled, second-row seats are heated only. 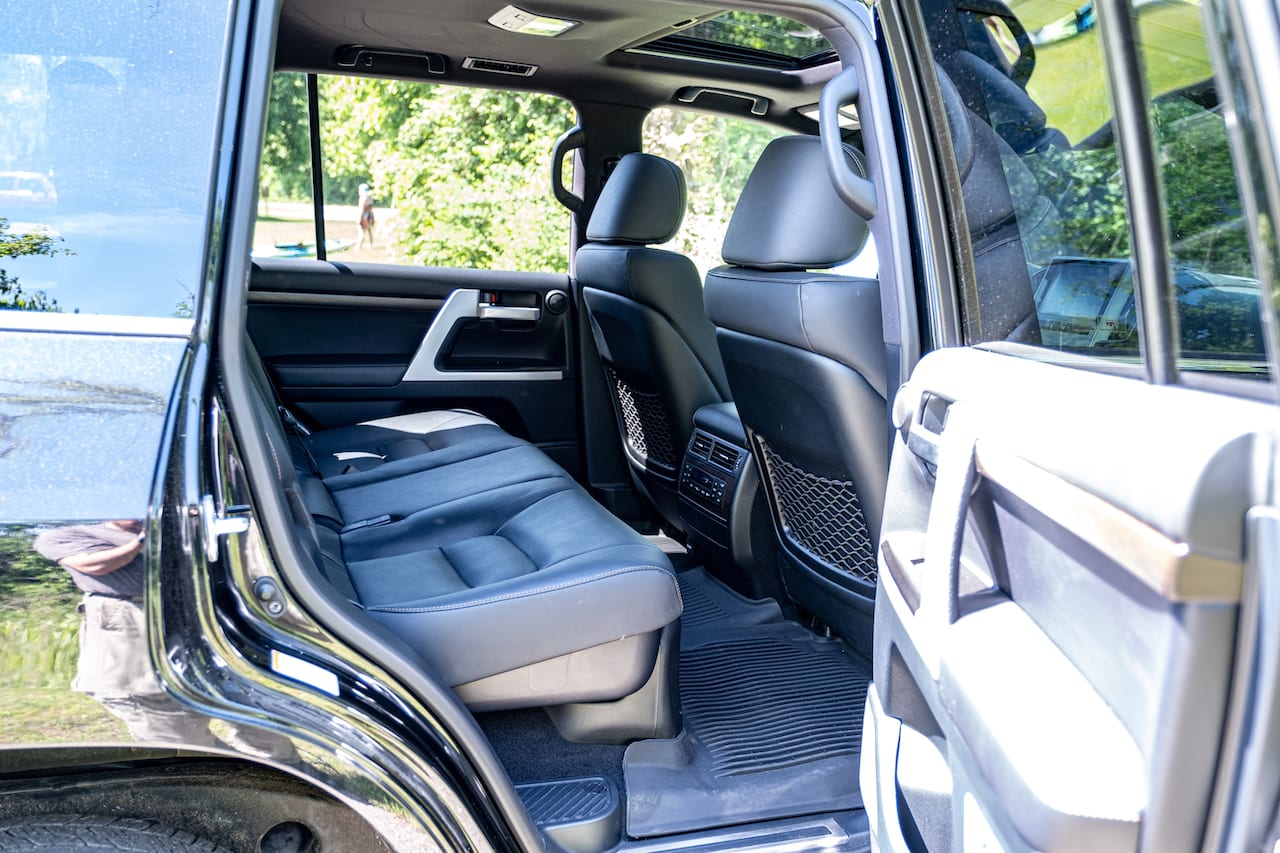 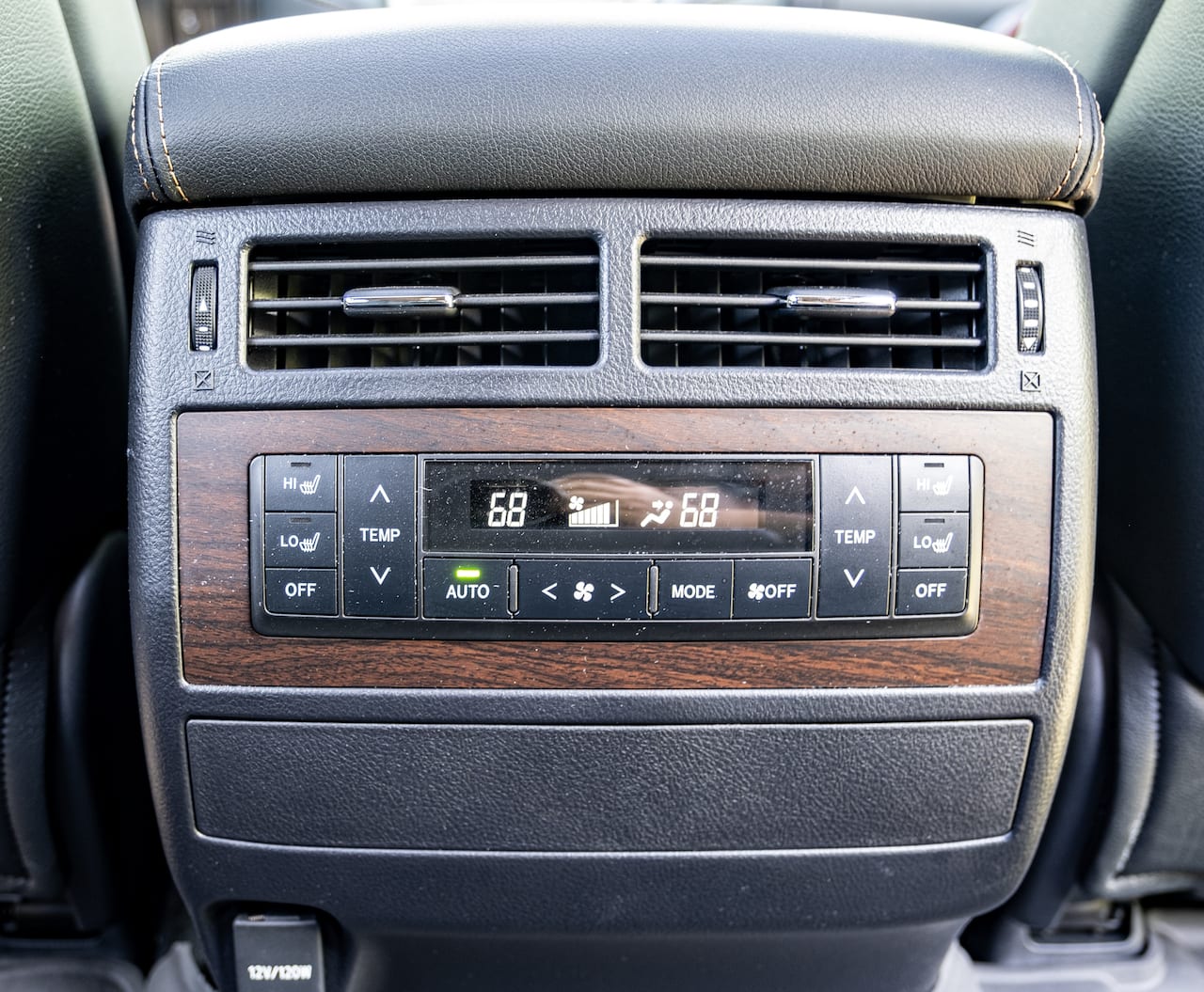 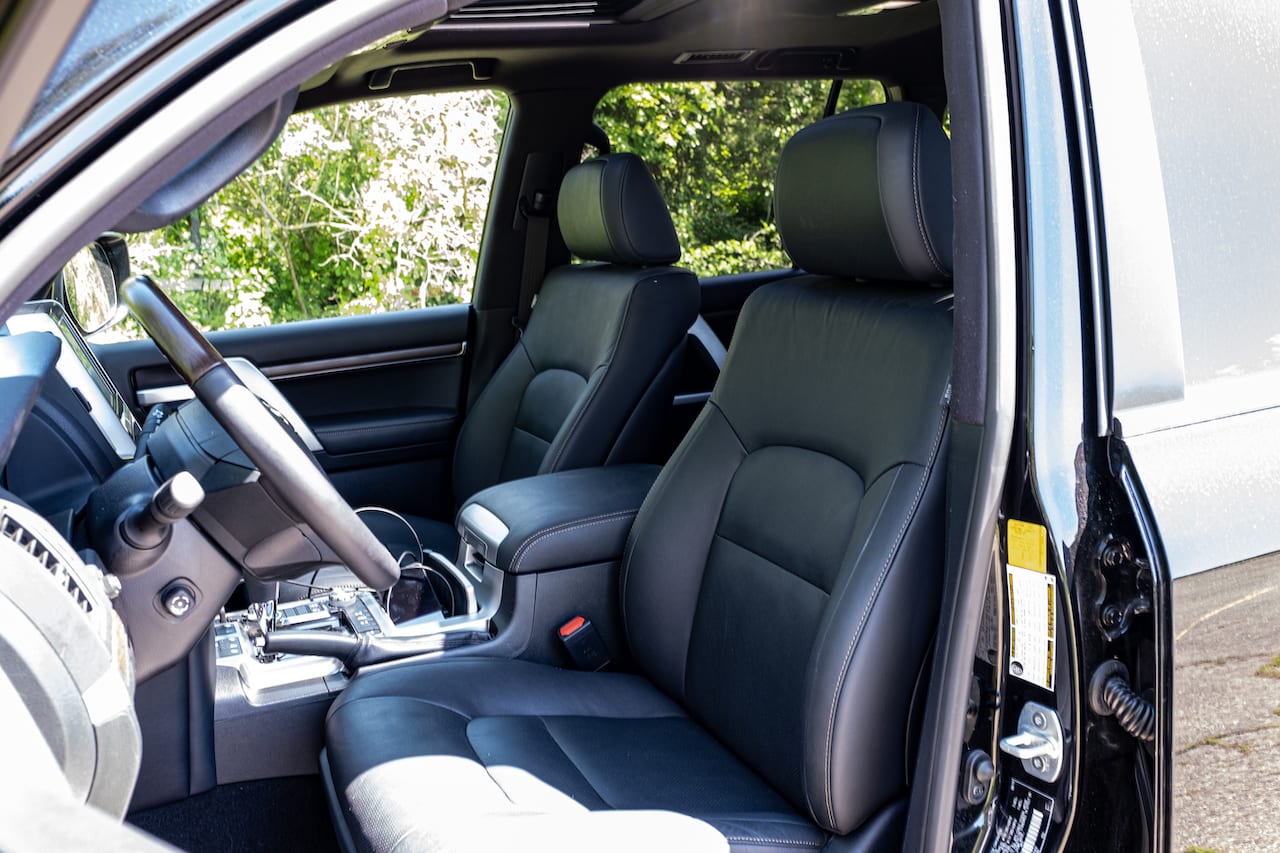 Many will focus on the infotainment system.  It IS very last generation, even if the screen size has been updated.  The resolution isn’t up to 2020 standards.  As well, Apple CarPlay and Android Auto are not offered.  You do get Qi wireless charging though.  Consumers keep putting more and more emphasis on the infotainment system especially if it doesn’t have the latest cutting edge tech.  As long as it works well as is, I’m good, and this one is fine.  Whatever the current flashiest infotainment system is today, three or four years from now it will be outdated.  Why fight a losing battle.

One major change to the interior is the elimination of the third row of seats.  This really opens up the cargo area of the Land Cruiser.  Fold the second-row seats forward and the cargo area is cavernous at just shy of eighty-three cubic feet. 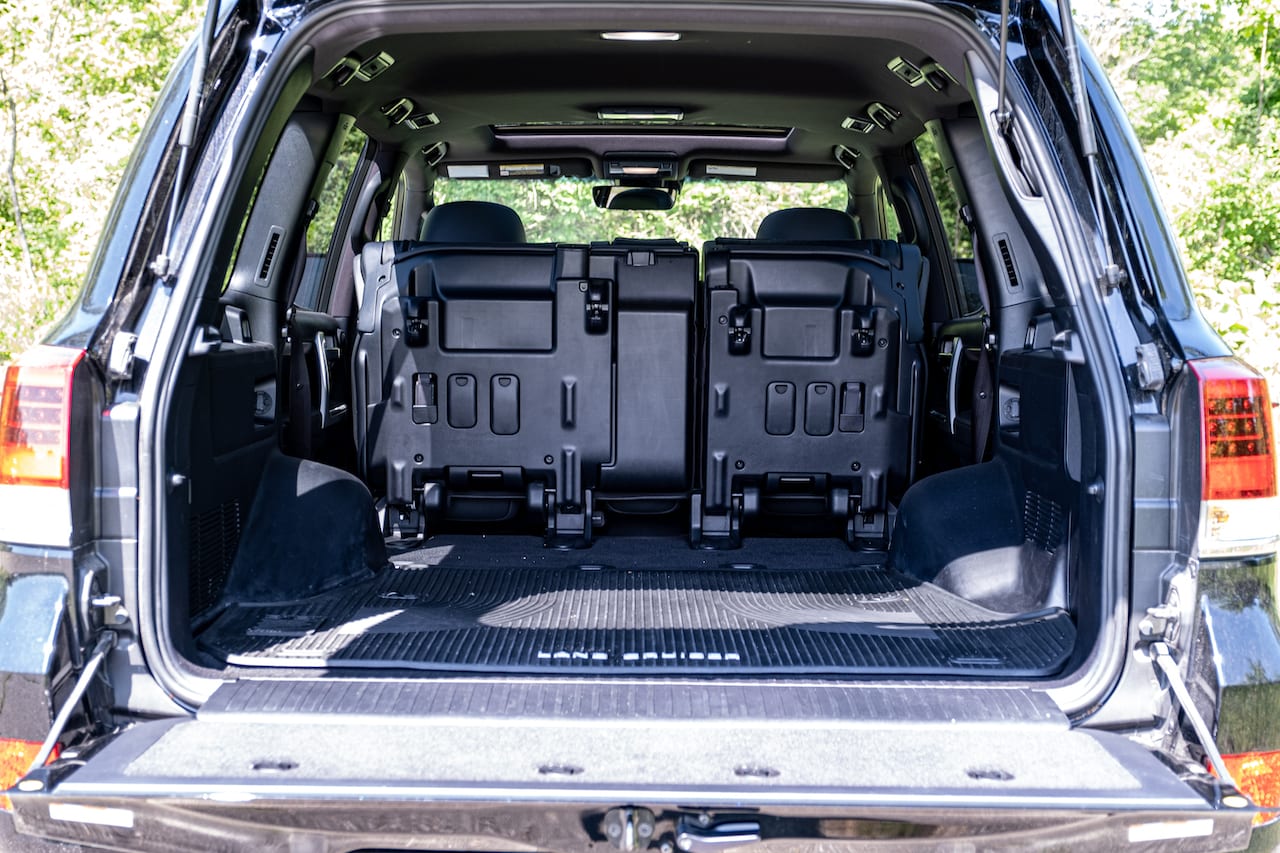 However, what Toyota giveth, they taketh away.  In the Heritage edition, you lose the mini-fridge in the center console.  Toyota says that with the additional cargo room you now have room to carry a cooler or a larger fridge for camping.  The thing is, if I’m on a road trip not off-road, It would be nice to keep my drinks cold.

Step up into the driver’s seat and you have a nice commanding view of the road without feeling excessively high.  The size of the Land Cruiser is also quite nice, especially compared to the American body on frame SUVs.  It does not feel as if it takes up the entire lane.  It is not so long that it is difficult to maneuver or park. Land Cruiser also has an exceptionally tight turning radius. 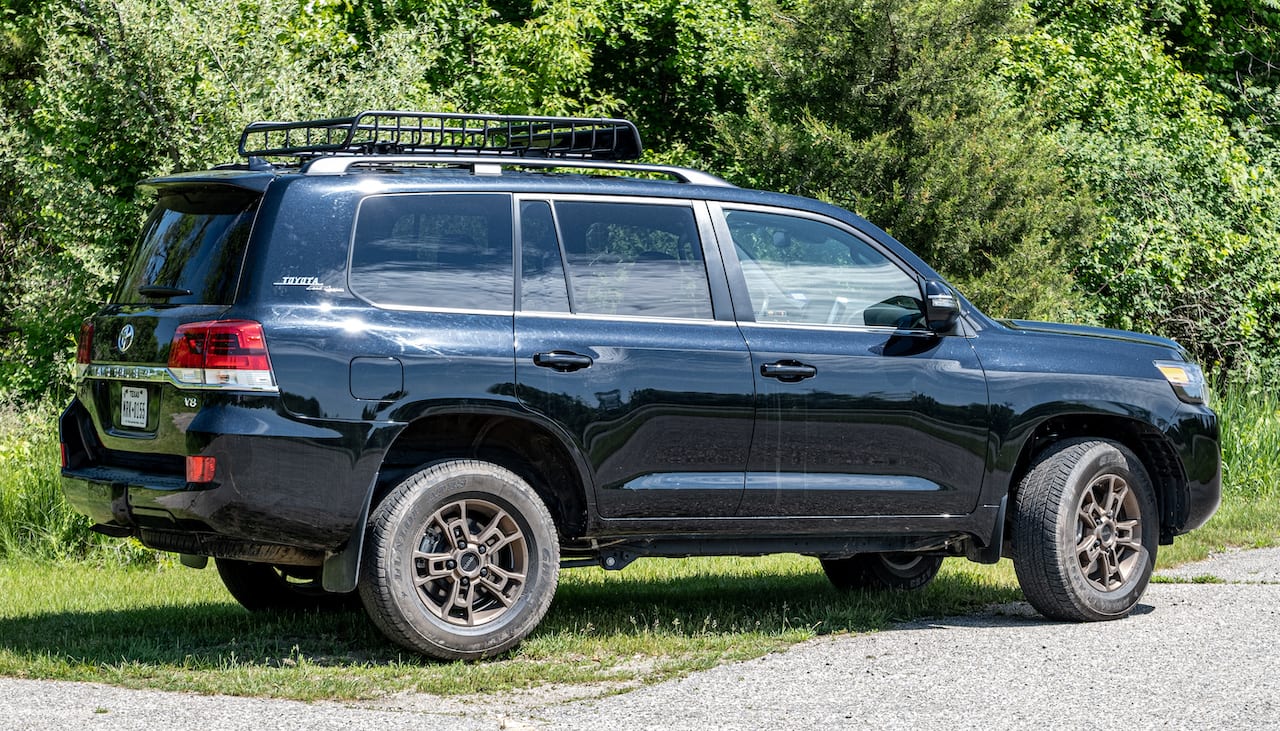 Special mention needs to go the steering feel.  Not only does it have some, but there is also a heft to it.  What I would call the perfect amount of heft.  Perhaps that is colored by having driven so many over boosted electrically powered steering systems of late.  A proper hydraulic rack and pinion system felt a joy.

The ride is exceptional.  If you didn’t know it, you would think the suspension had been tuned by Europeans.  It was very similar to the X7 I drove earlier this year.  The cabin was quiet and relaxed.  As mentioned before at highway speeds you could hear the wind noise off of the Yakama rack, but remove that and it’s almost Lexus quiet.

This is a vehicle in which the more time you spend with it, the more your affection for it grows.

If I had any disappointment with the Land Cruiser it’s that I didn’t get to spend as much time off-road as I had planned.  I did spend time driving on some rutted and washboard dirt roads, and the Land Cruiser sucked it up like it wasn’t there.

There are three off-road parks within two hours of me.  One was open, two were not, hashtag COVID.  Of course, the one that was open was also the farthest away and other commitments made the trip to go there a no go. 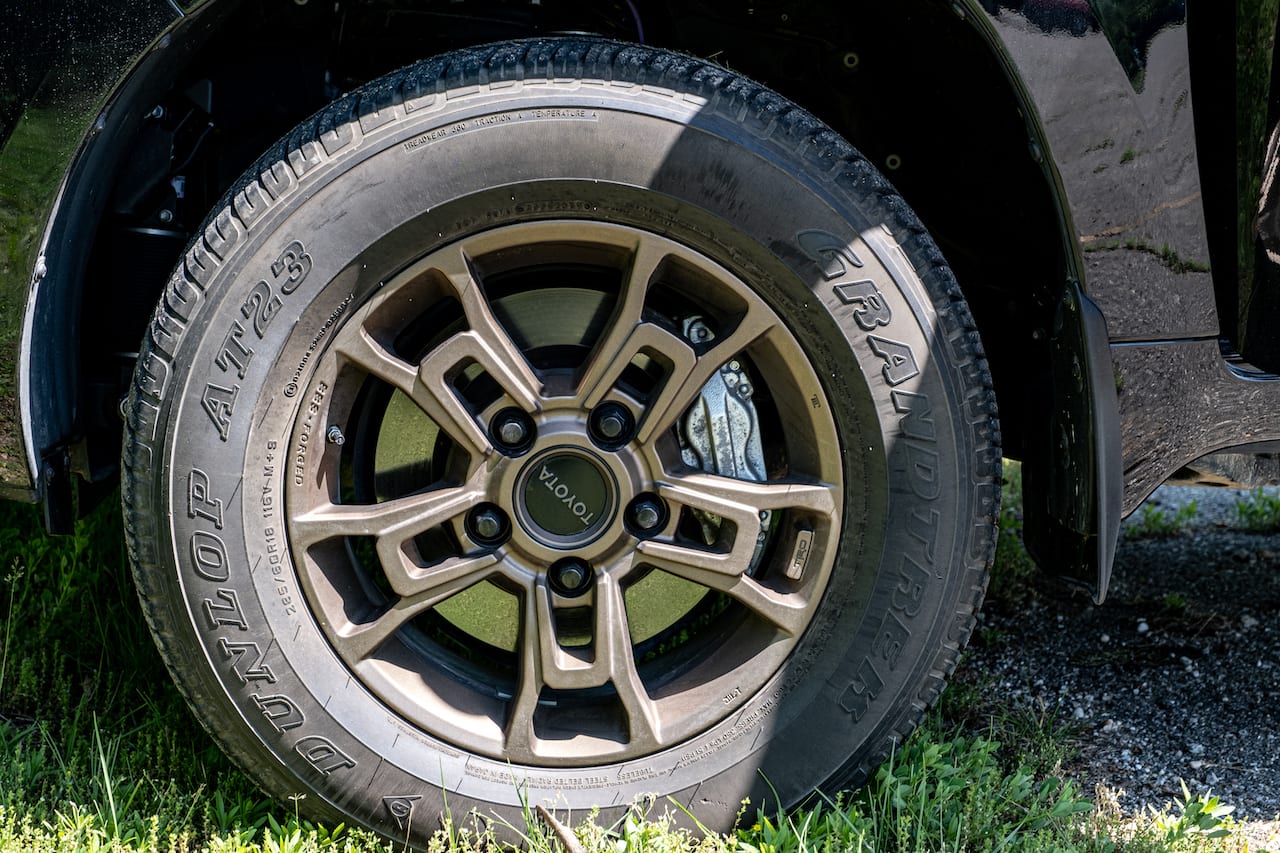 The Land Cruiser comes with all the features for off-roading.  It comes with a center locking diff.  What Toyota calls Kinetic Dynamic Suspension System, where the system will automatically disconnect the front swaybar for greater articulation.  It also has crawl control, multi-terrain selection, and a bit of a party trick with off-road turn assist.  Select the button and it will partially lock one of the rear wheels to decrease your turning radius.  Very handy on tight trails.

The best way to answer Todd and Paul’s question about money is to change your point of view.  So much of how we look at cars is from a “new money” point of view.  You want the flash and the sizzle to show off.  The Land Cruiser is more “old money”.  You have no need to show off.  In fact, you sometimes go out of your way to if not hide your wealth but downplay it.  The best way to illustrate that point is to look at all the people of significant wealth who drive old Subaru Forester and Outbacks, especially in the Mountain West of the US and parts of New England.  Jonathon Ward’s ICON brand is built on this whole concept, be it his Derelicts, Bronco’s, or his Land Cruisers.

The money is in having a fairly exclusive vehicle.  Just over 3,500 were sold in the U.S. for calendar 2019.  The Land Cruiser is built on a special line in Japan, so while not hand-built, there is extra attention to detail.  It has materials that will still look and feel good a decade-plus from now.  Land Cruisers are also designed and built to a different standard.  The average automobile is designed to last 120,000 miles give or take.  The Land Cruiser’s brief is for 250-300,000 miles.  It is why, when given the option, those that drive in the outbacks of Australia and Africa continue to buy this over all others. 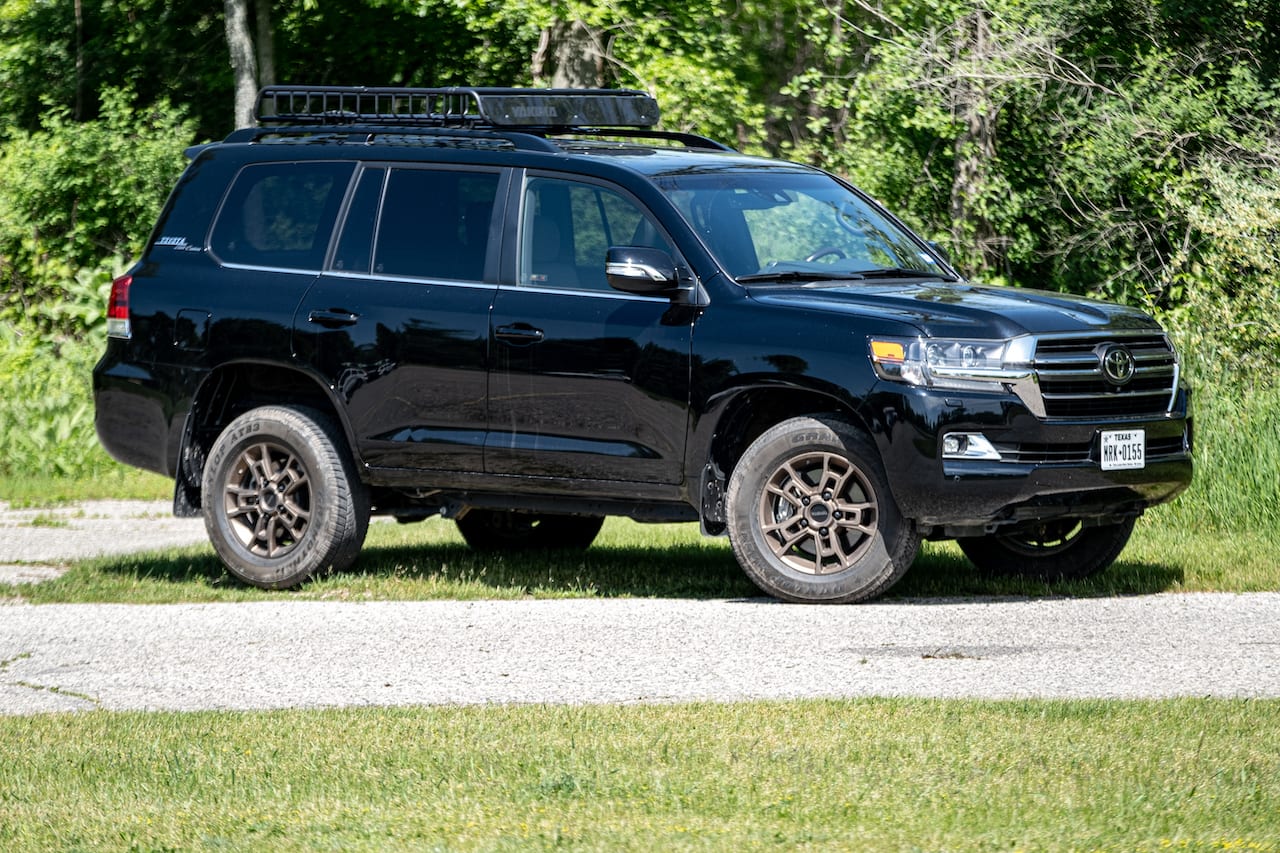 You may look at the price and think, “I need a fifteen-year mortgage to afford it.”  Here’s the thing.  You buy a new Land Cruiser today, you will still be driving it in twenty years and it won’t be worn out.  That is including taking it off-road with some frequency.  Do you think that would be the case with the current crop of Land Rover/Range Rovers?  Chevy Tahoe, GMC Yukon?  Ford Explorer?

If you aren’t concerned with having the latest and greatest, but would rather have something to build memories and perhaps pass down to your next generation, then look no further than the Toyota Land Cruiser.