Full sized executive sedans from Germany always had a bit of an aura to them.  Their heyday was the mid to late ’70s into the early twenty-oughts. The Mercedes S Class was identified as an “old money” car.  The BMW 7 Series, was always interesting. It didn’t always fall into the classic “executive” stereotype.  It was a little edgier, more avant-garde type of buyer.  Less “stuffy”.

The big executive sedan fell out of favor, at least in North America, once the original Lincoln Navigator and especially the Cadillac Escalade gained traction.  In many ways, it’s understandable why the big luxury SUV took hold.  It is easier to get in and out of for the demographic purchasing it.  It rides a little softer over deteriorating infrastructure.  It has more presence on the road. 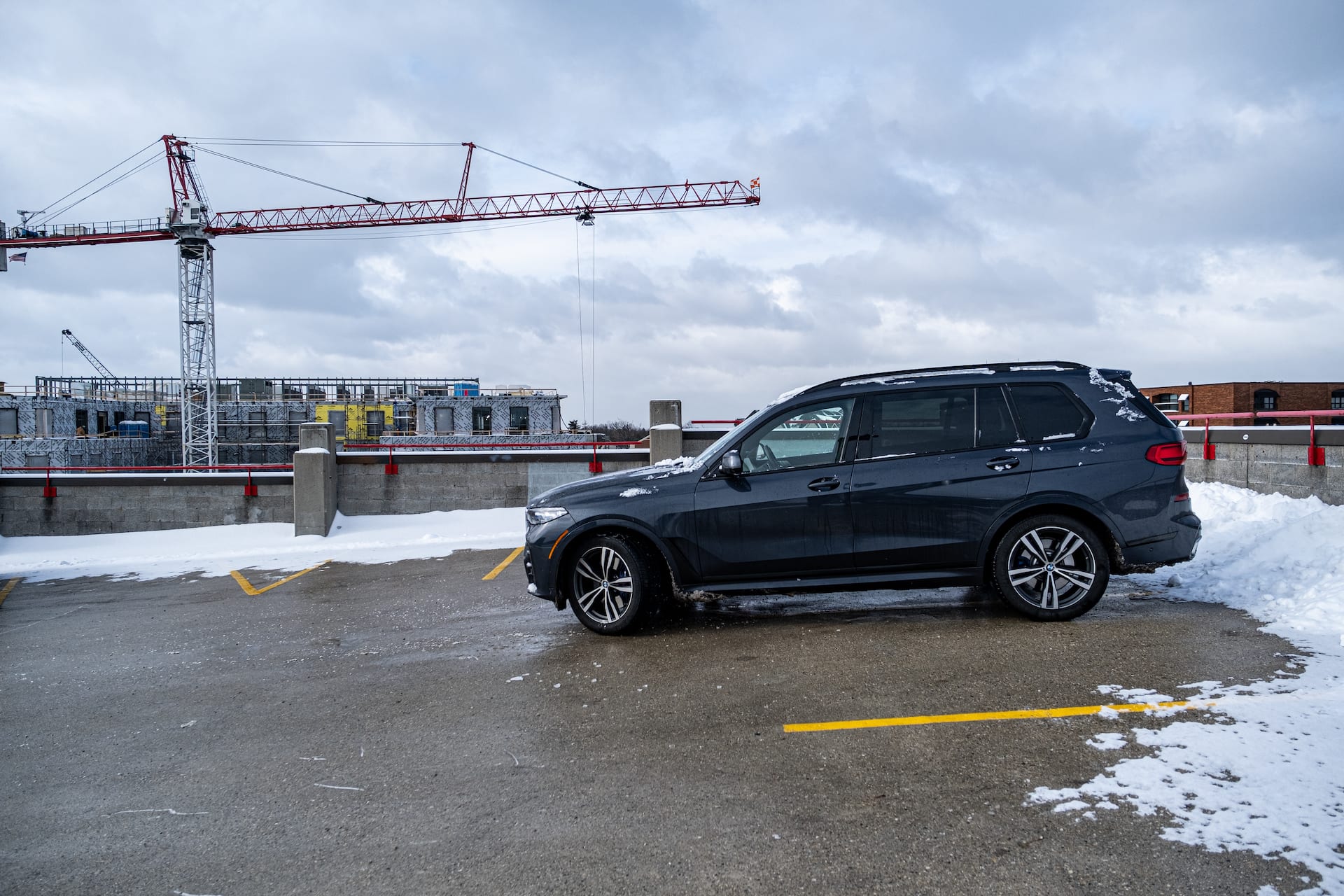 What is surprising is how long it has taken BMW to roll out an SUV equivalent to the 7 Series.  While Mercedes debuted the ML in the late ‘90s it was a little utilitarian in its first few years.  More because it was envisioned as a G-Wagon replacement rather than an E-Class SUV analog.  Whereas when BMW debuted the X5 at the turn of the century it very much WAS a 5-Series analog.  So, given the success of the X5, as well as the X3 and the VERY questionable X6, it’s a bit of a head-scratcher as to why they took so long to bring out the X7.

About a year ago I spent a week with the BMW X5 xDrive50i, and it took most of that week for me to gel with that $92,000 vehicle.  For most of the week and several hundred miles, I just couldn’t see “where the money was”.  In a lower-trim version at $70,000 sure, but not that model.  And then even, in the end, I still link the smaller engine version of the X5 is the right call. 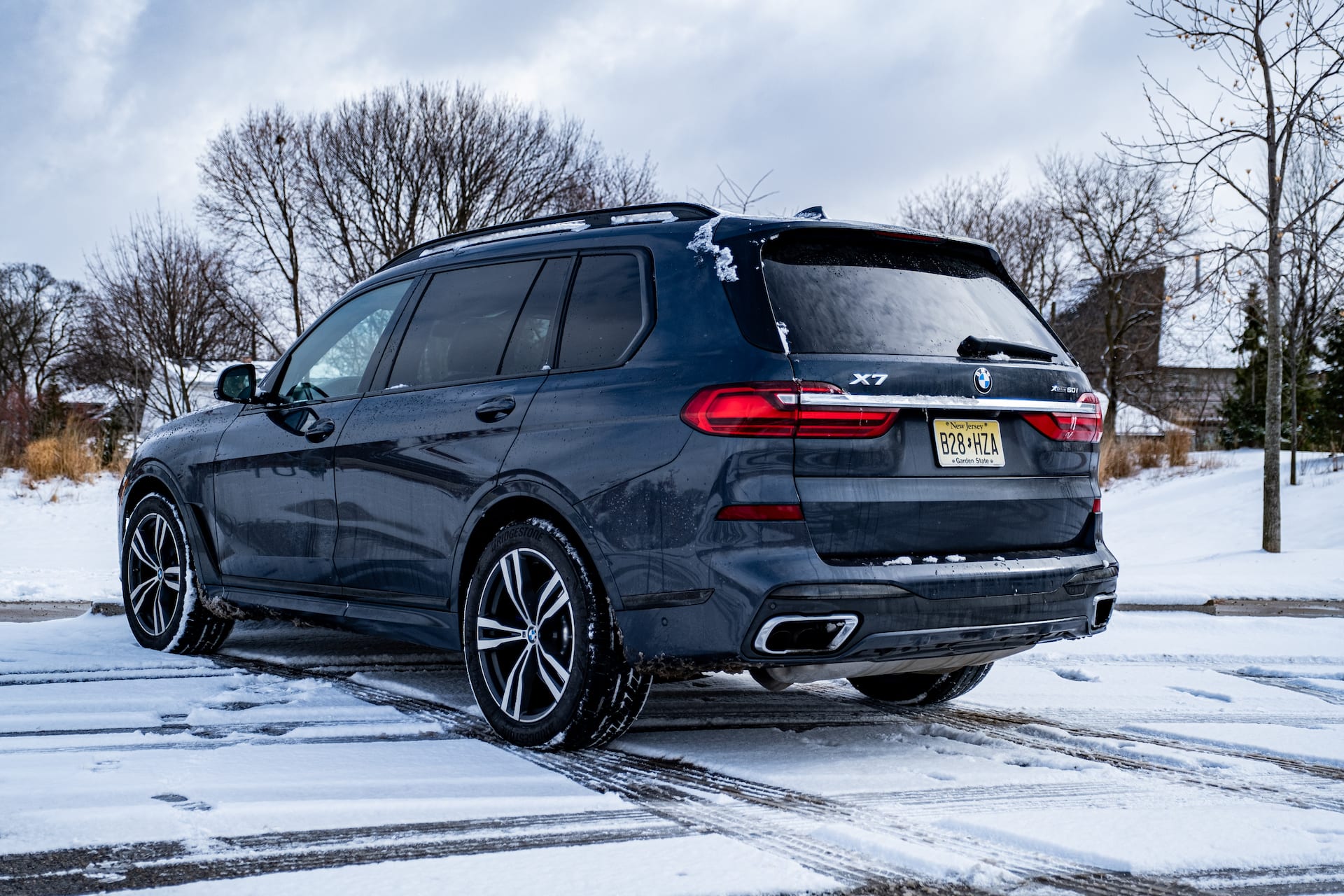 Comes the X7 for review.  Because it’s a “flagship” vehicle I looked at it through a different lens.  I absolutely expected this to be a six-figure vehicle. It was, ringing in with an as-tested price of $112,245 including destination charges.  What I will say right away is, if you can afford the X7 you better be able to afford a good attorney.  The speed and serenity in which you reach triple-digit speeds is astounding.  But more on that later.

Viewed in profile, even up close, the X7 can and was mistaken for the X5.  More than a few people asked me how I liked the new X5.  I usually responded with not as much as I like this new X7, which was true.  You really need to see an X5 and an X7 next to each other to see just how well BMW hid the size of it.  From the rear or rear three quarters, if this was de-badged most people would guess it was an X5.  Where the extra size comes from visually is from the b-pillar back.  The rear doors are quite large, and in tight spaces can be difficult to fully open.  That said, the X7 isn’t overly wide like many American full-sized SUVs, and it makes a world of difference in tight parking lots and parking structures. 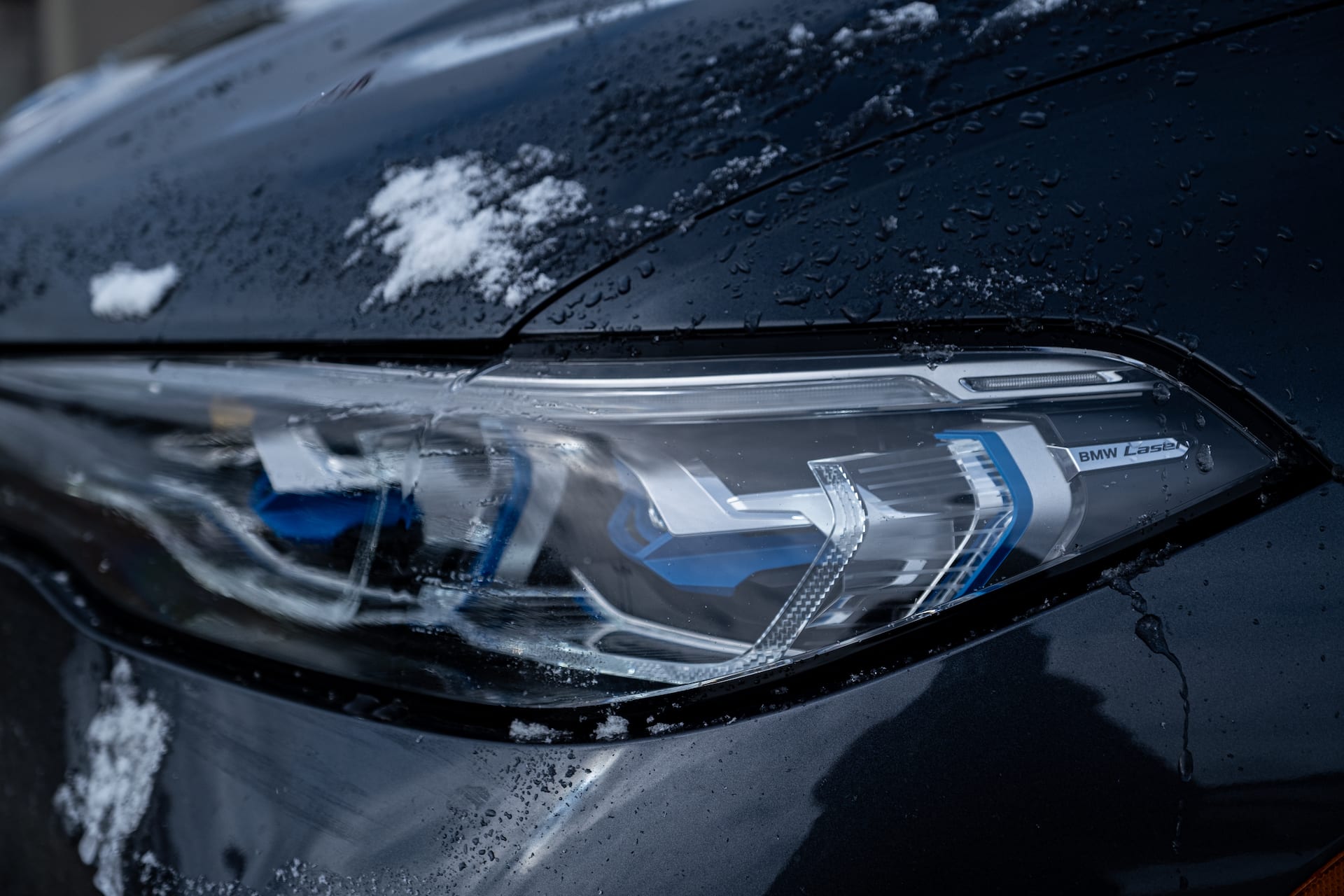 I am still not sold on the direction BMW is going with the grill, making it so very large.  It lacks a certain elegance.  That said, with this latest iteration of the grill along with the styling of the Laser headlights it gives the X7 a menacing “don’t fuck with me” look. 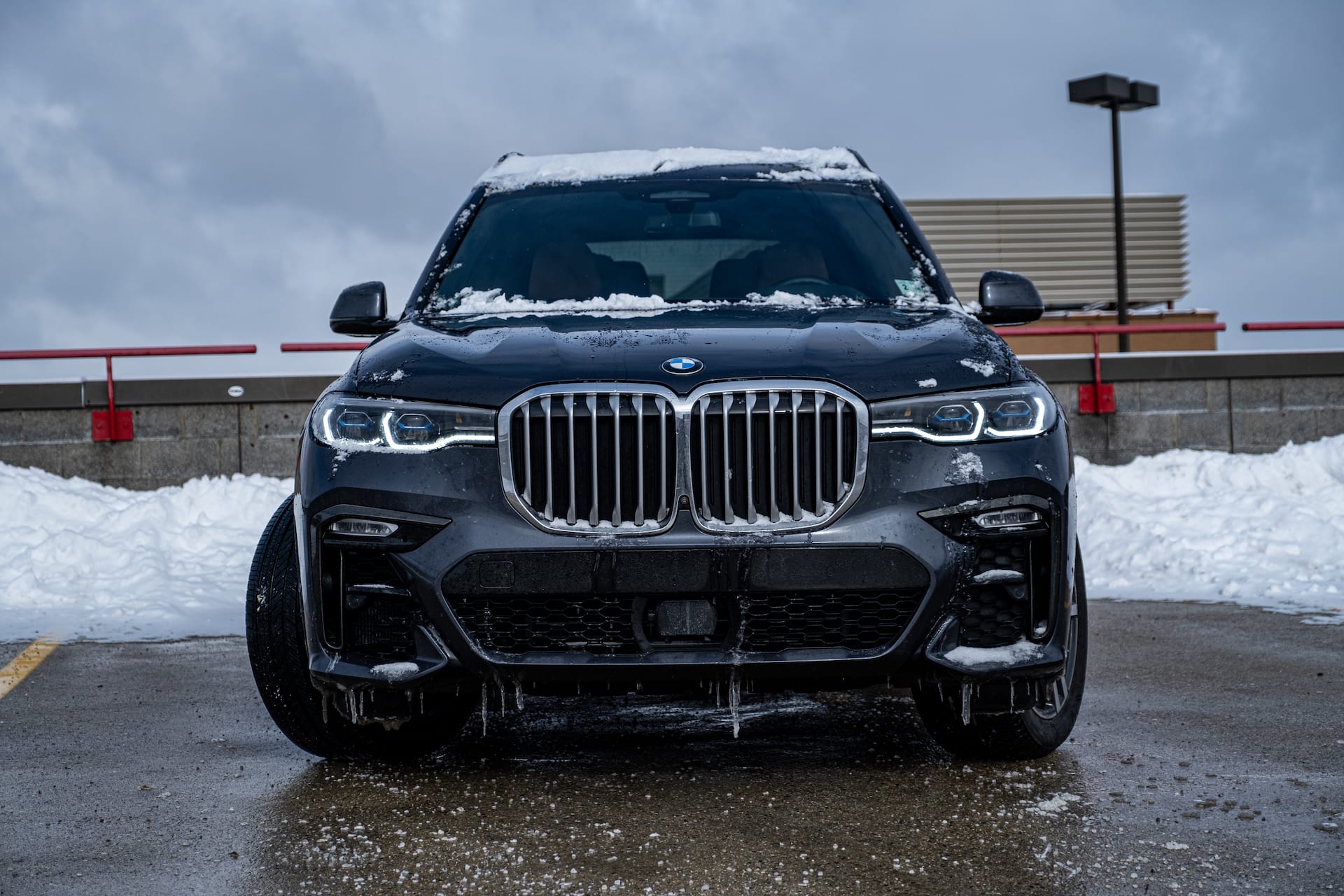 It is here I’m a little conflicted.  The materials through the vehicle are nice, and an upgrade to what you’d find in the X5.  Where I find them lacking is that they don’t feel special.  I’m not expecting Bentley quality leather here.  Still, once you cross that six-figure price tag when you get in, you should know you’ve arrived.  While yes as stated it’s better than X5, it’s just not quite enough of a step up in my opinion.

The leather has a very nice touch and feel to it.  All the touchpoints have good materials.  Even in the low touchpoints where there are plastics, it is of good quality.  It looks and feels as it has a heft to it, rather than thin materials coming from the lowest-cost supplier. 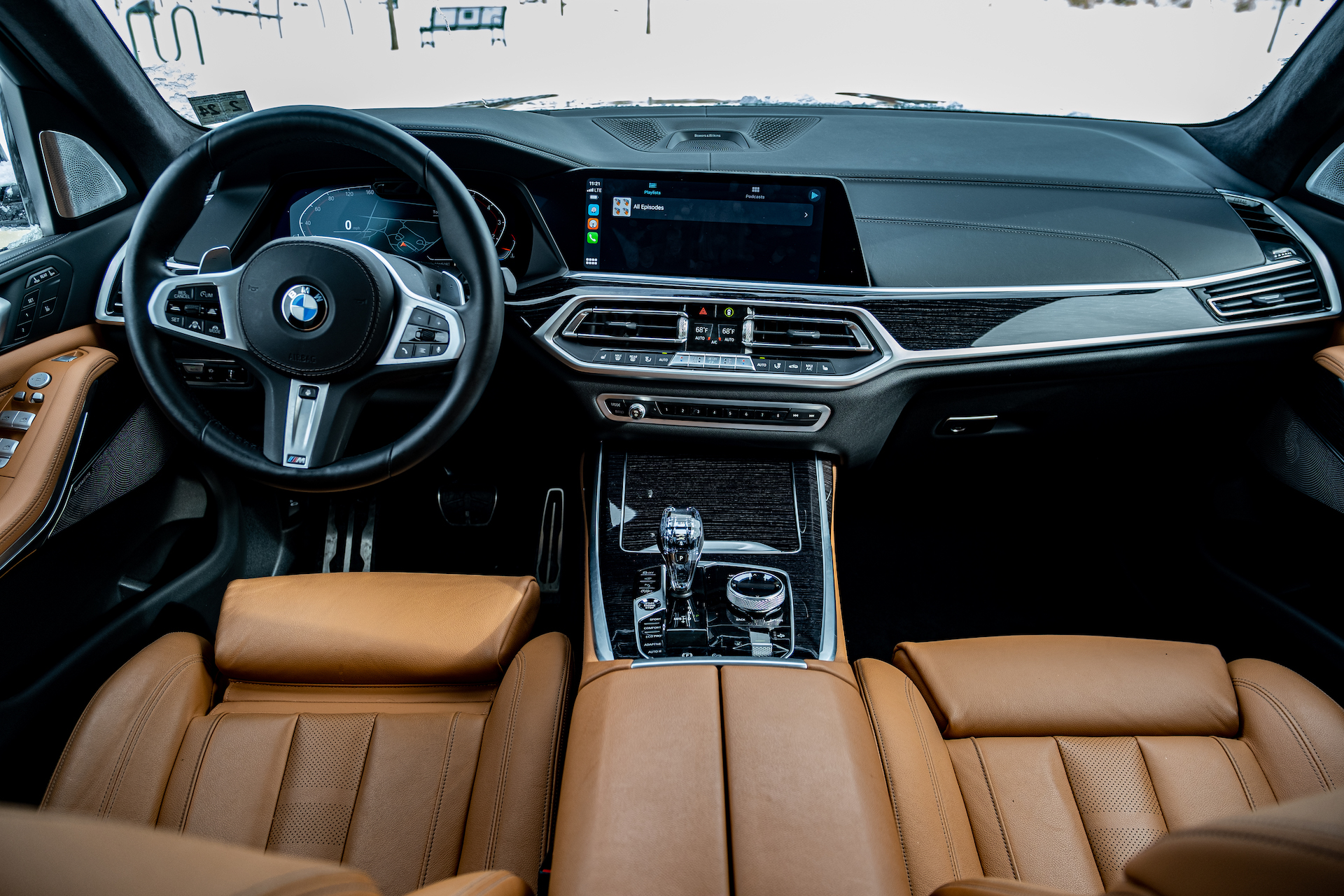 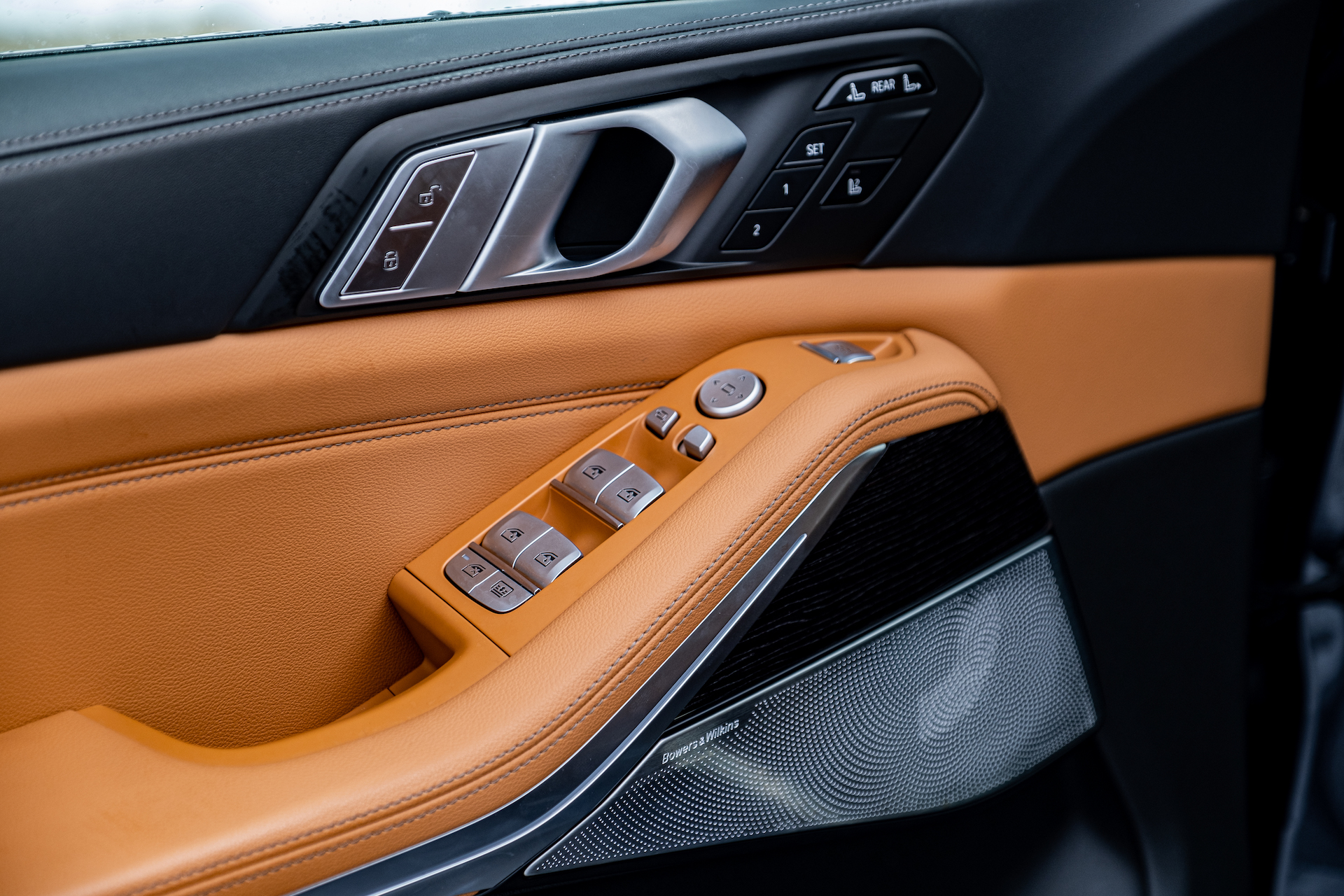 The driver and passenger seats are 20-way adjustable including four different lumbar adjustments.  These are seats that if you can’t find a comfortable setting in, then you never will.  The control layout is a bit of a mixed bag.  The center console is fine, the right side of the steering wheel is OK, the left side controls on the steering wheel are a hot mess.  The pictograms do not give the driver a good idea of what they do.  Confer with the owner’s manual, not much help either.

As you would expect there are nice details everywhere.  The crystal-like shifter, the heated and cooled cupholders, even the dome light carries styling details from the headlights and the puddle lights. 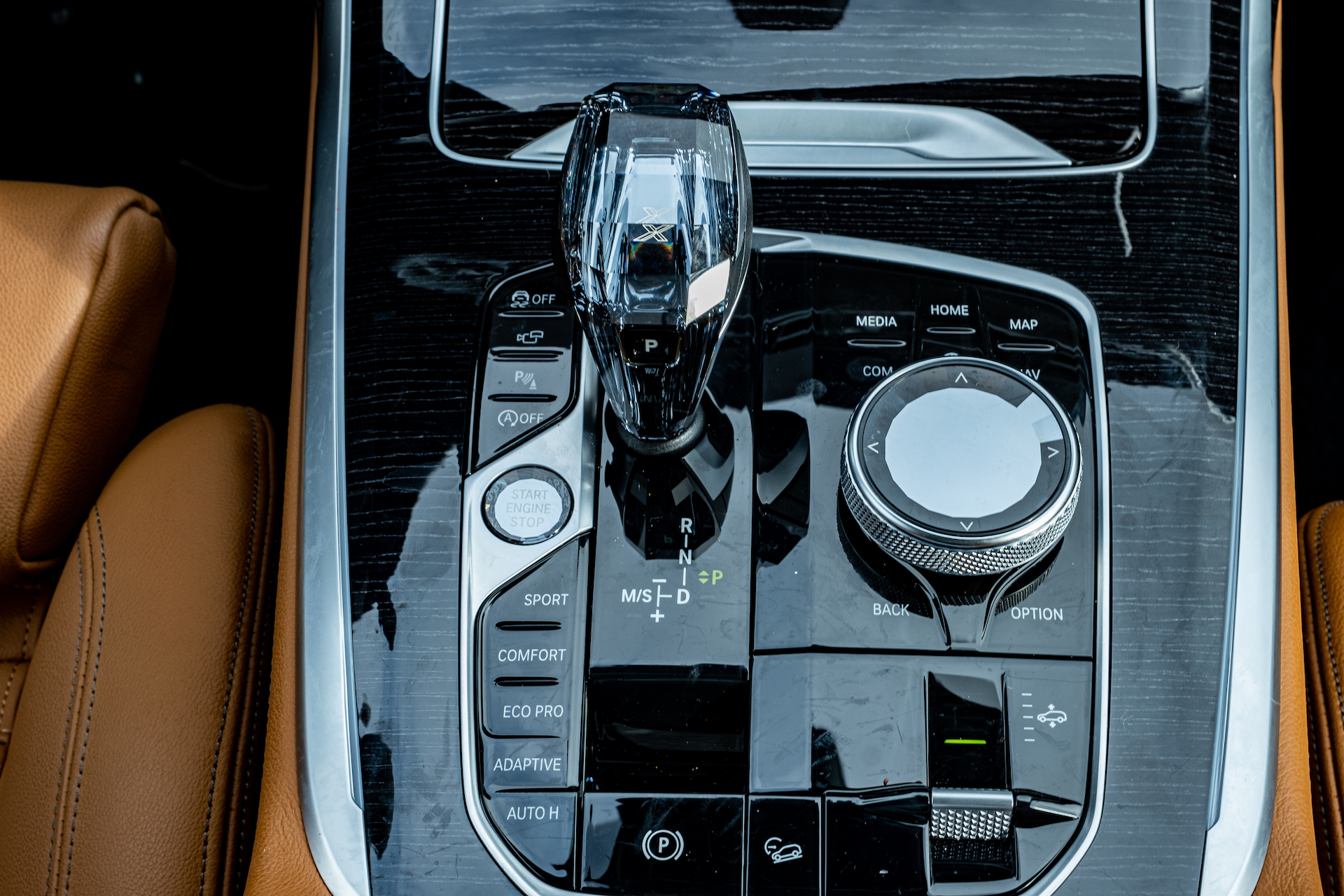 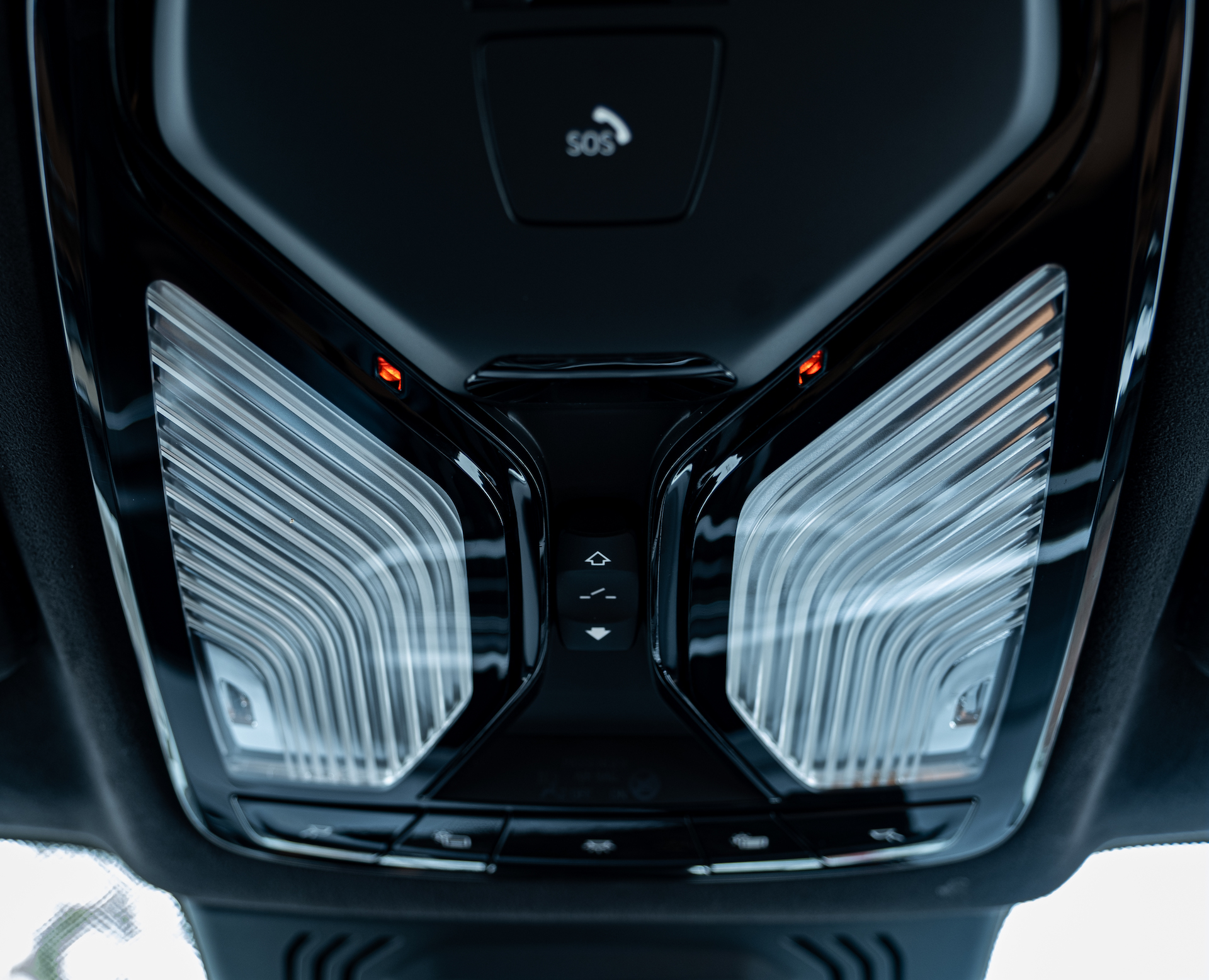 The legroom in the second row is excellent.  If you wanted to be driven rather than drive the X7 you would be very comfortable there.  In addition to the abundant legroom, four-zone climate controls mean you can find a comfortable temperature and direct that air as you wish.  You have good cup holders in the second row along with heated seats and multiple USB ports for your devices. 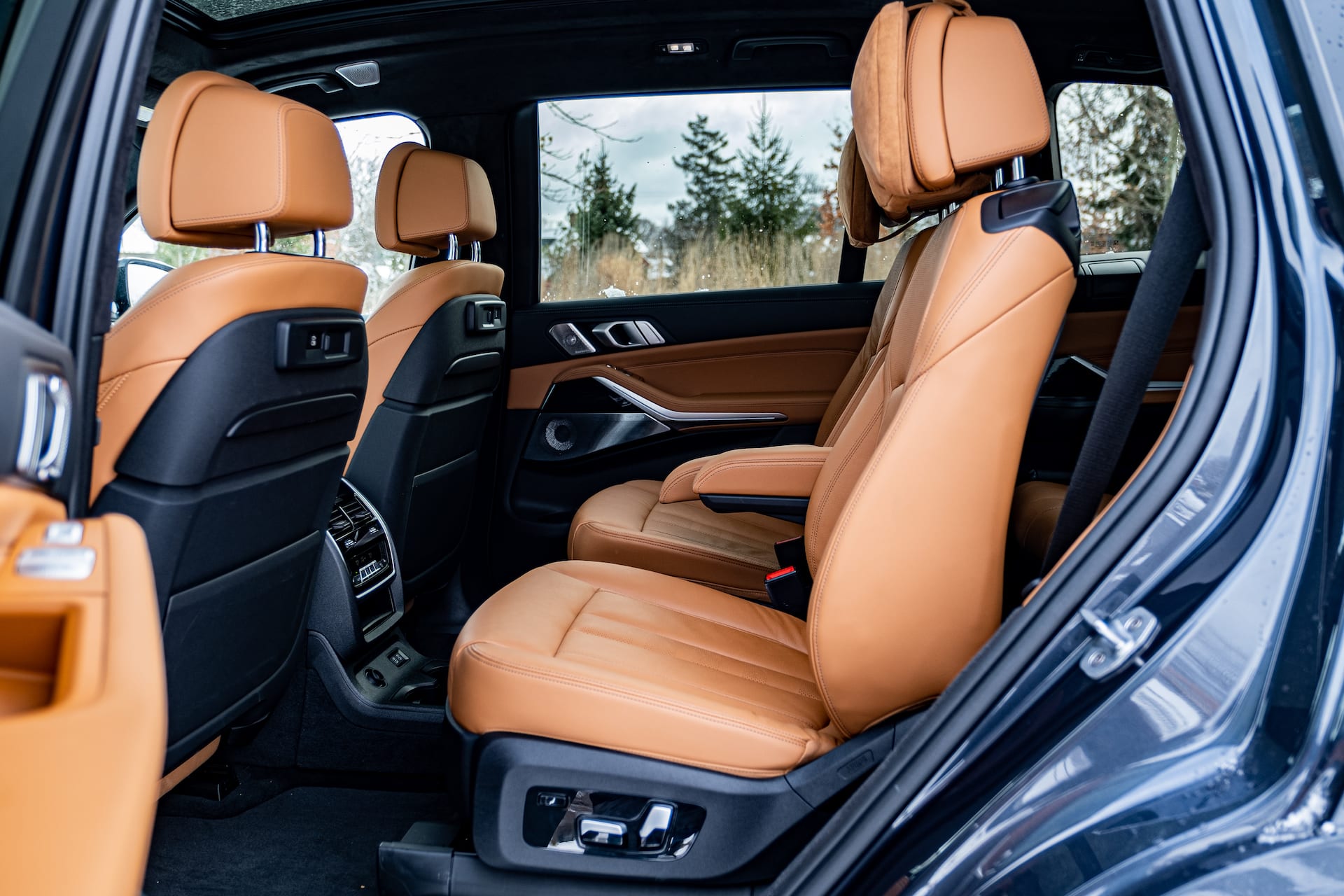 In the third row, there is enough legroom for adults to be comfortable.  And for more than fifteen minutes at a time.  An hour plus for an adult in the third row shouldn’t be an issue.  That third-row legroom comes at a price though, and that is cargo room.  With the third row up, cargo room is limited.  Once you put the third row down, the cargo area opens up considerably.  You can raise and lower both the third and second-row seats electrically with controls located at the left rear of the cargo area. 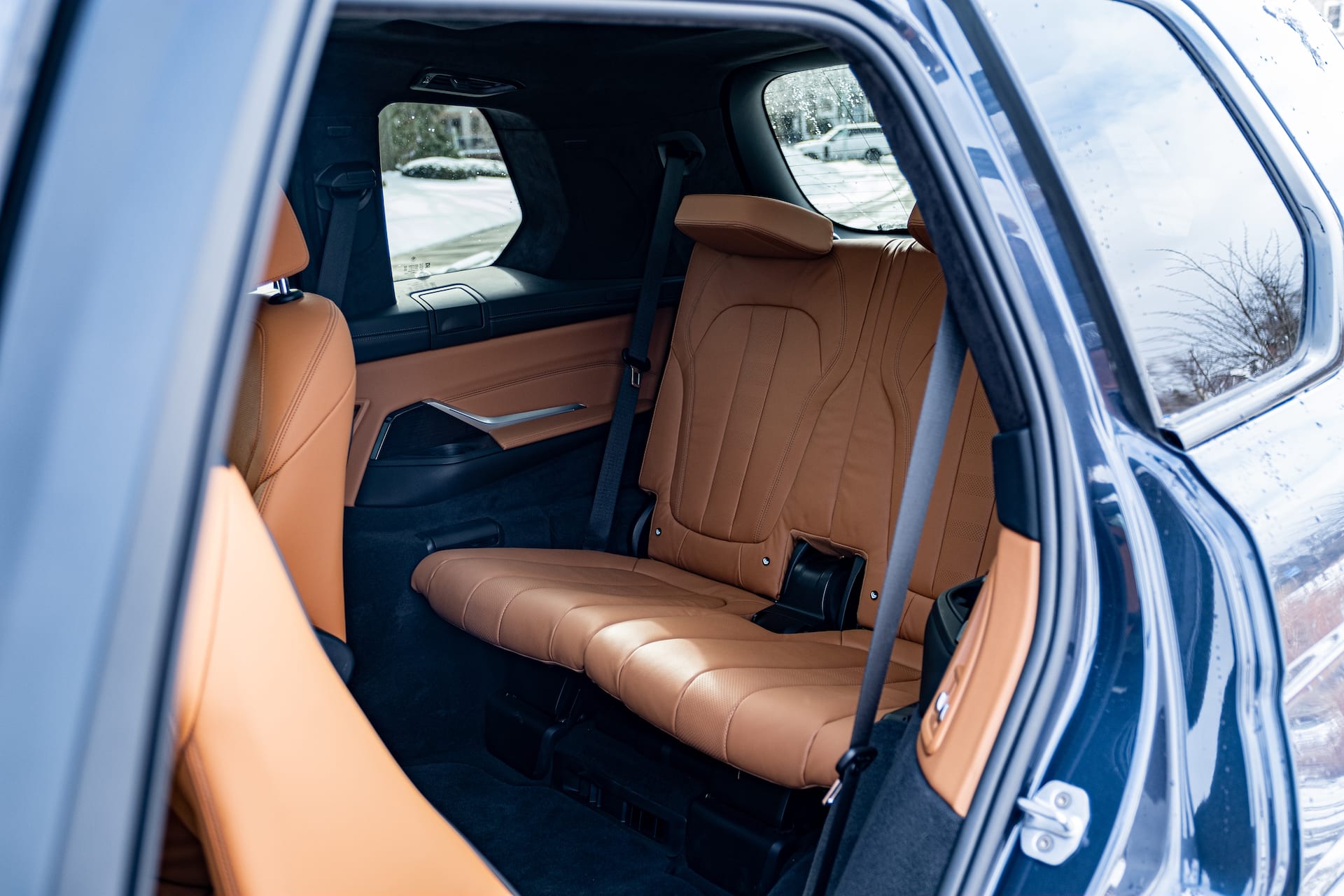 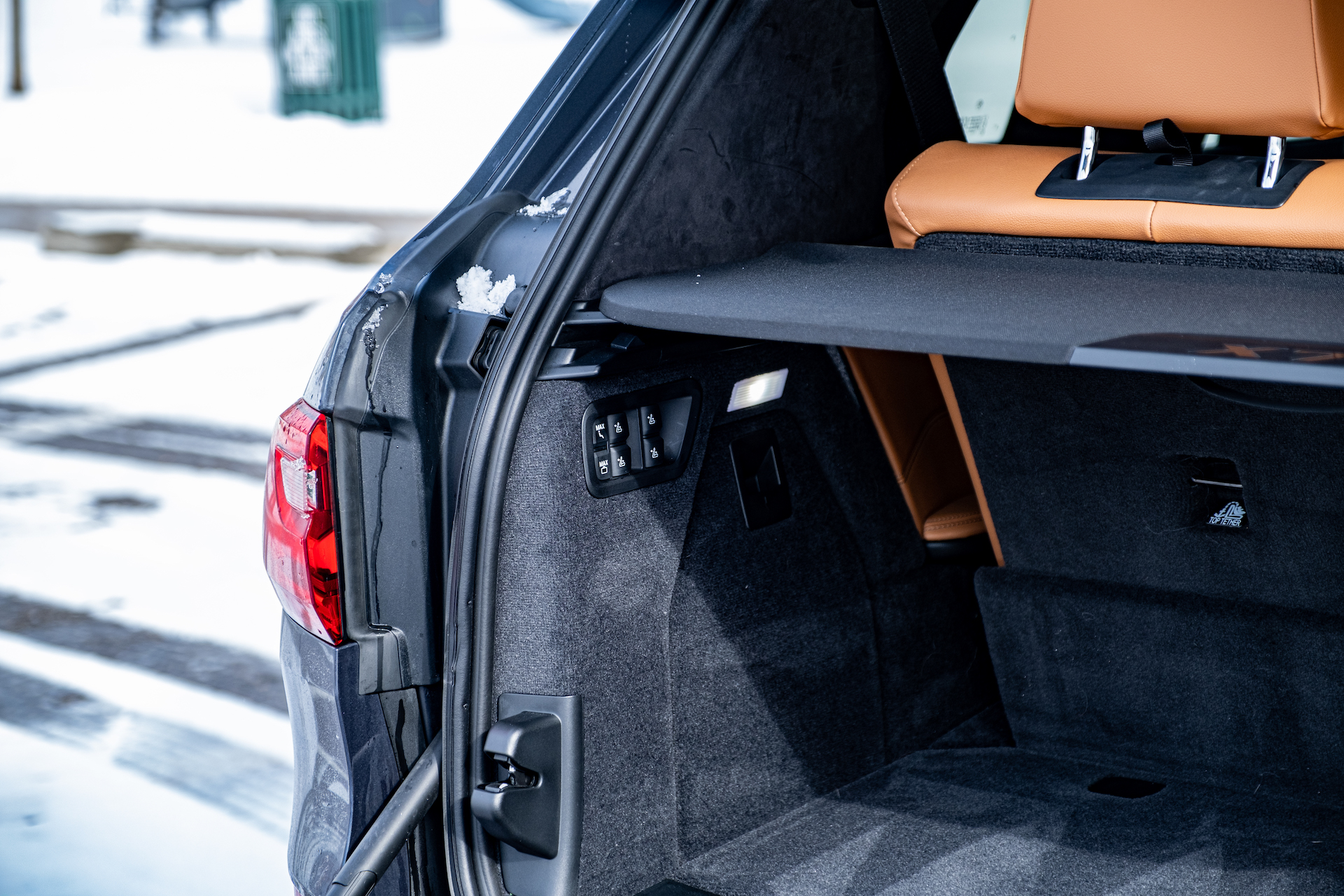 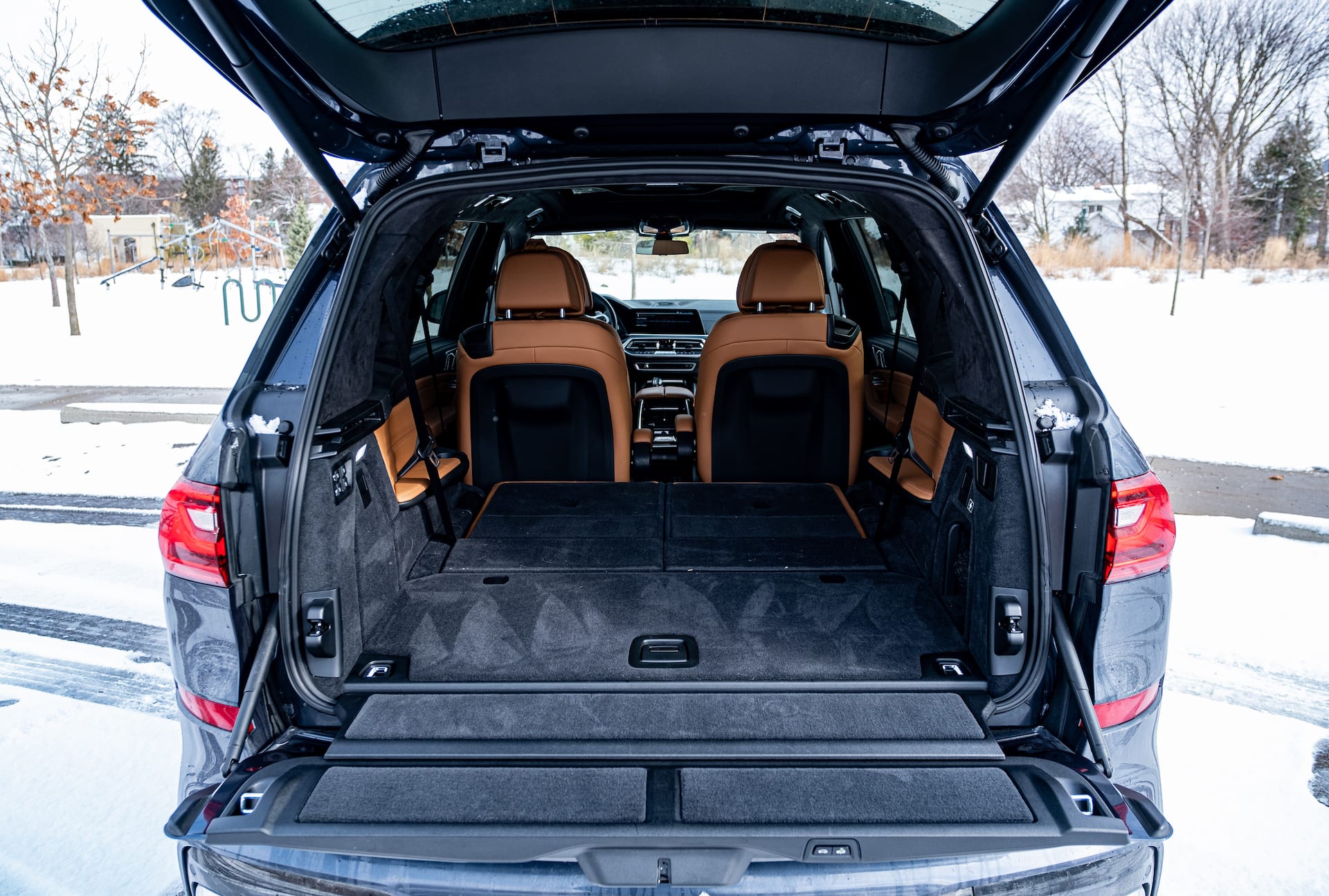 Upfront my experience with the infotainment system in the X7 was better than the X5.  I had no problems connecting my phone to it for Bluetooth as well as, and more importantly, Wireless CarPlay.  That said the UX of the system is still suboptimal.  There are menu upon menus buried in the system and trying to find something usually involves pulling out the owner’s manual and spending fifteen or twenty minutes trying to track it down.  Even then, you can not always find what you are looking for. 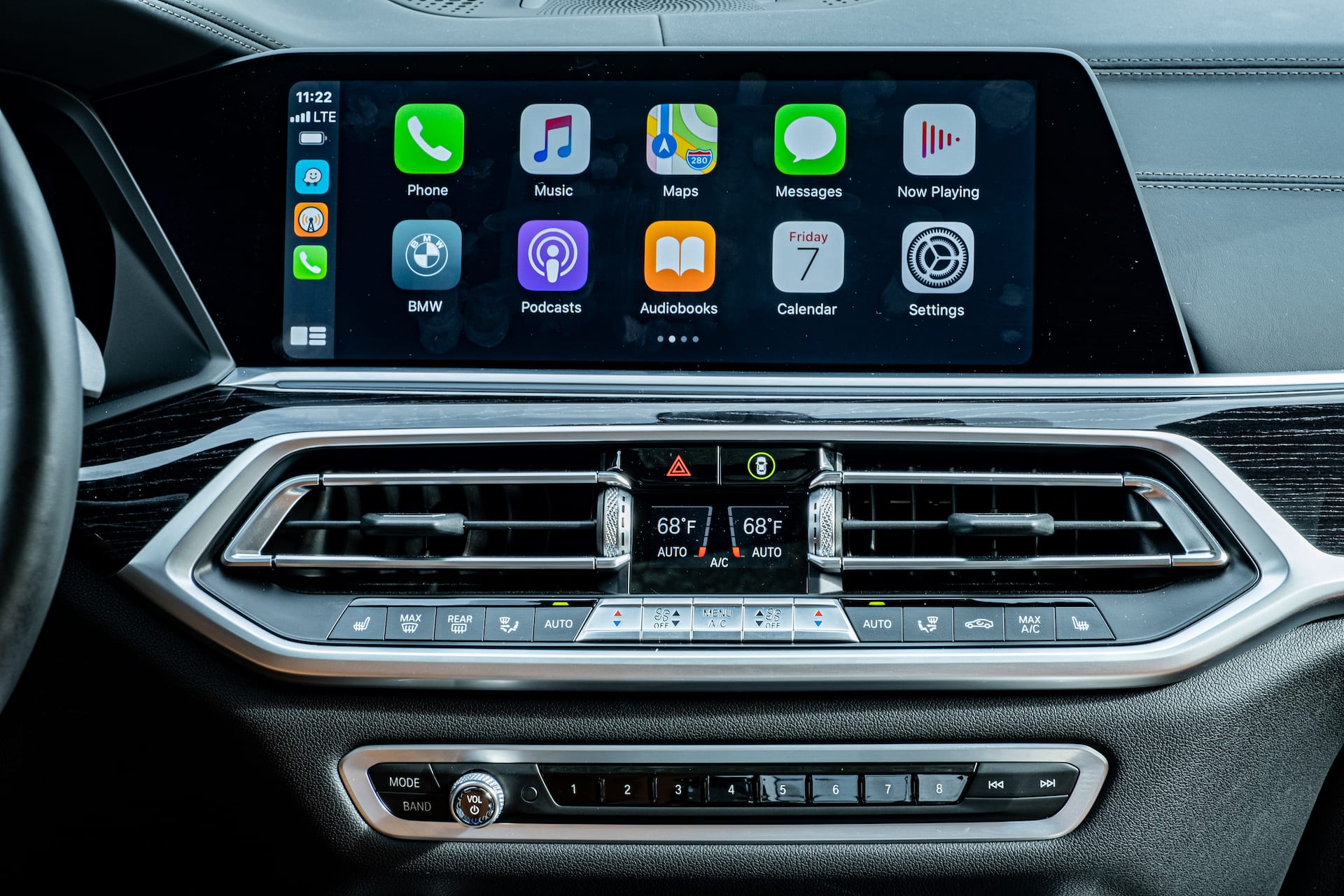 As an example.  Need to adjust the bass or treble in the system?  I could not locate the menu.  Other items were buried three menus deep.  It is overly complicated and needs a thorough rethink.

The “Hey BMW” works well, though it is a little sensitive to anything resembling BMW.  “Be a moment” often triggered the system.

The screen itself was large, clear, and responsive.  The spot in the console to place your phone for wireless charging, on the other hand, wasn’t the best.  It was tucked up in the opening in front of the shifter.  In addition, the platform you placed the phone on did not hold the phone in place reliably.  Just about any movement would seem to jostle it off or move it so that the phone would no longer charge.

With the twin-turbo 4.4-liter V8 under the hood, the power to move this 5,600-pound vehicle is not a problem  The engine produces 456 horsepower from 5,200-6,000 RPM and 479 lb/ft of torque from a diesel-like 1,500 RPM all the way to 4,750 RPM.  Lightly touch the throttle and you are up to speed quickly.  Very quickly.  As I was driving the X7 in February, reliable 0-60 times on snow and ice-covered streets were pointless.  According to Car & Driver, they tested this very same X7 at 4.6 seconds 0-60!  In fact, on city surface streets you are quickly passing all traffic without trying.

On the highway though is where the X7 really shines.  On multiple highway runs, keeping the X7 under ninety was a chore.  Yes, I said it was a chore to keep it under 90!  90 feels like 45, no joke.  At 85 mph the engine is turning just under 2,000 RPM.  With the vault-like quietness of the cabin and the smooth but controlled ride, you lose all sense of speed.  As I said at the beginning, best to have your attorney on speed dial, if not on retainer, for all the speeding tickets you are going to get with the X7. 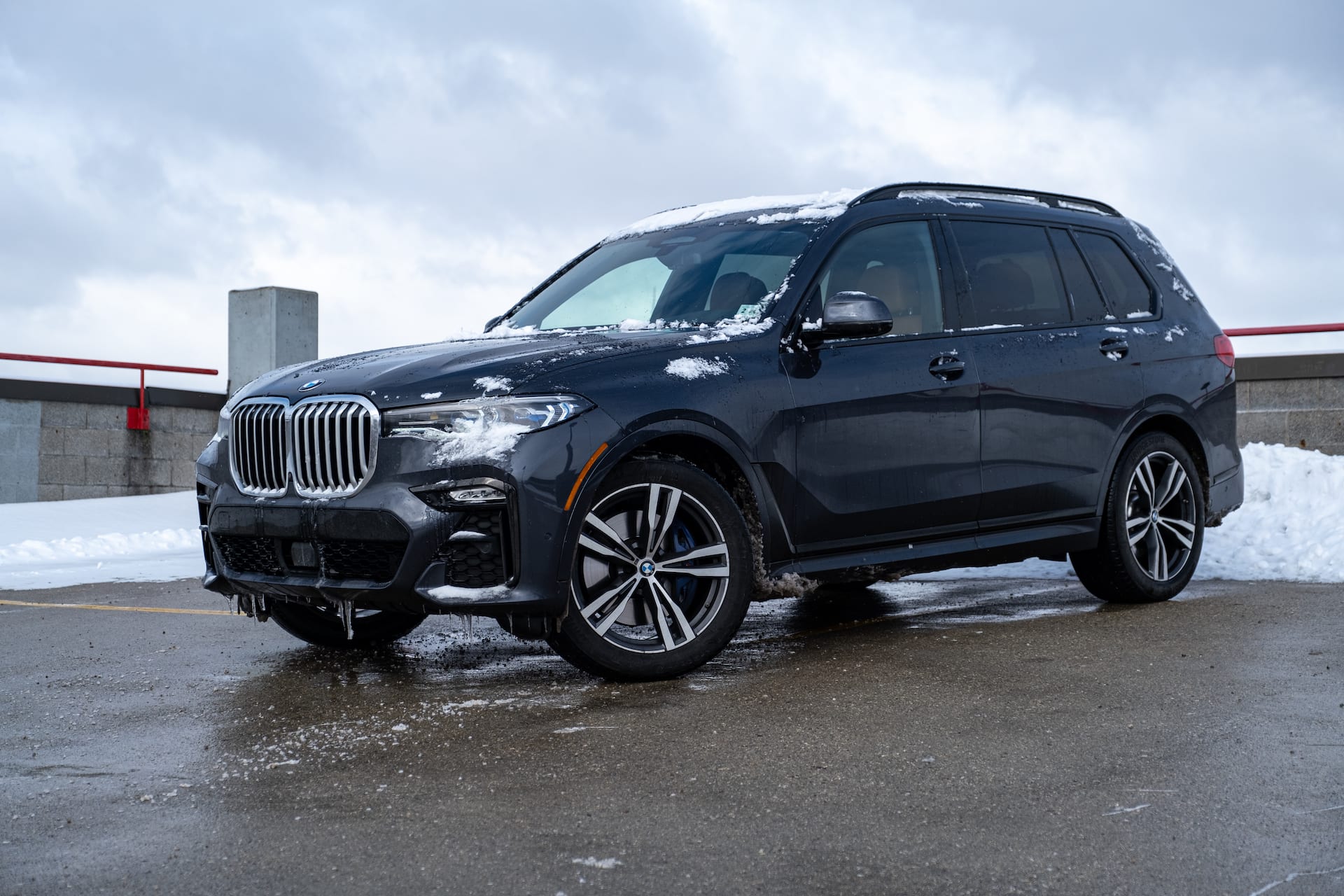 The ride is European, but not overly so.  It is firm and controlled without being harsh.  Potholes and frost heaves seem to disappear below the X7.  You are aware of them through the steering wheel, but the suspension and chassis absorb them nicely.

With just shy of twenty-two gallons of fuel capacity and EPA rated 21 MPG highway, that is over 450 miles of range on the highway.  The city fuel economy is rated at 15 MPG and combined is 17 MPG.  If you do a lot of highway driving the X7 would be a fantastic platform to make those miles disappear.

I was a bit amazed at how much I liked the X7 after my mixed feelings on the X5.  I walked away really liking it.  Yes, it has issues with the infotainment UX, however, I’m sure that once you’ve spent months with the vehicle it would become more intuitive. 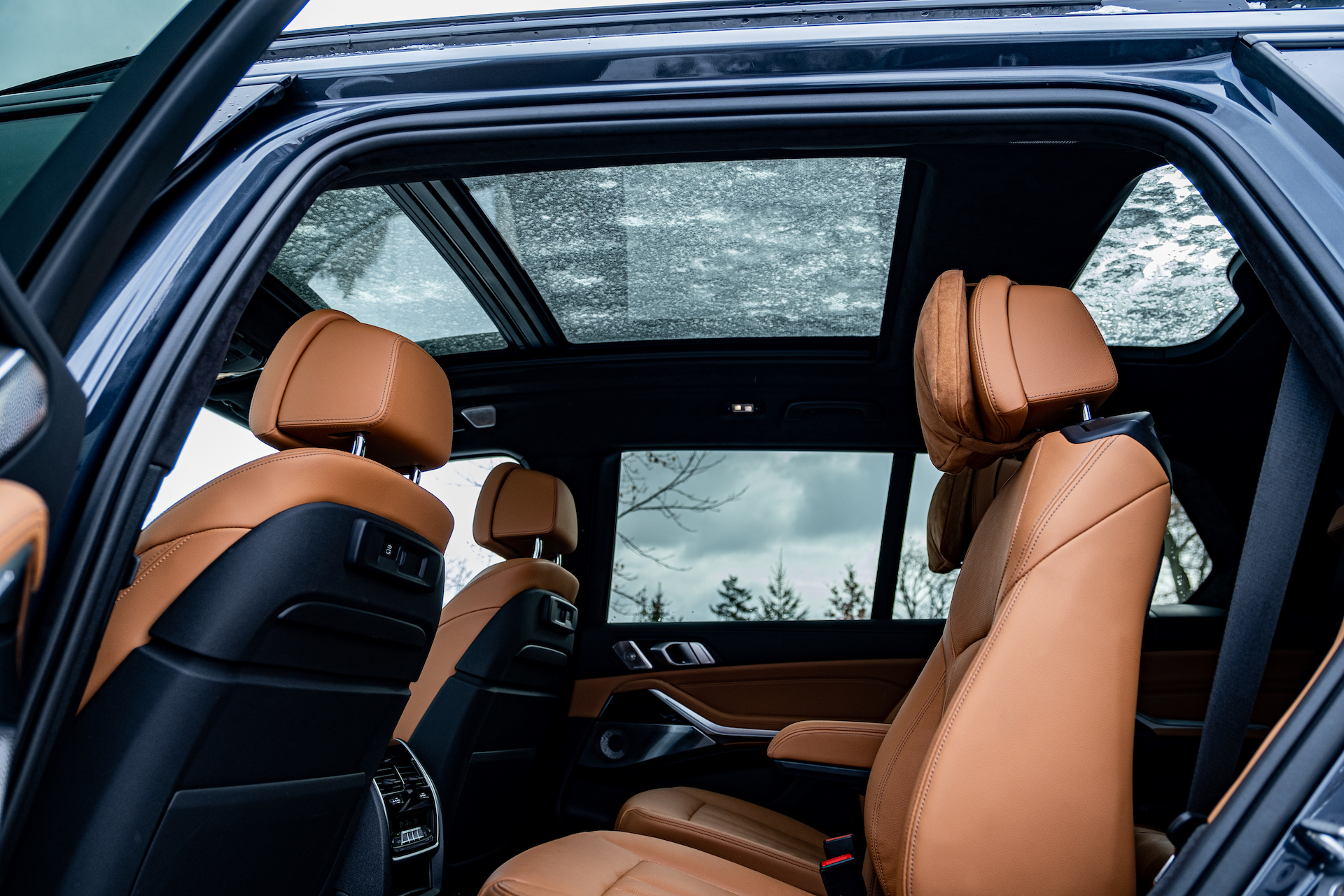 How does it stack up against its competition?  I have yet to drive the new Mercedes GLS, so I can’t comment there.  I like it better than the Q7, it’s far better than the outgoing Escalade, the current Navigator is a close call and yes better than either the Lexus GX or LX.

If you are in the market for a luxury three-row SUV, then the BMW X7 really should be on the shortlist of vehicles you test drive.