Technology in cars is an interesting thing. It’s a bit like boiling the frog by gently turning up the heat little by little. If you go back to a car pre-2005, you’ll see that the tech didn’t change that much between then and the early ’90s.   Somewhere around that 2005 time frame, manufacturers started tossing everything they could at cars tech-wise, and in the last fifteen years, the interiors have become unrecognizable to what they once were.

Even going back a decade will give you a reality check to just how far and how fast we have loaded up today’s vehicles with screens and touch surfaces. The evolution in the resolution of said screens and their responsiveness will also stand out.

Case in point — the subject vehicle for this review. 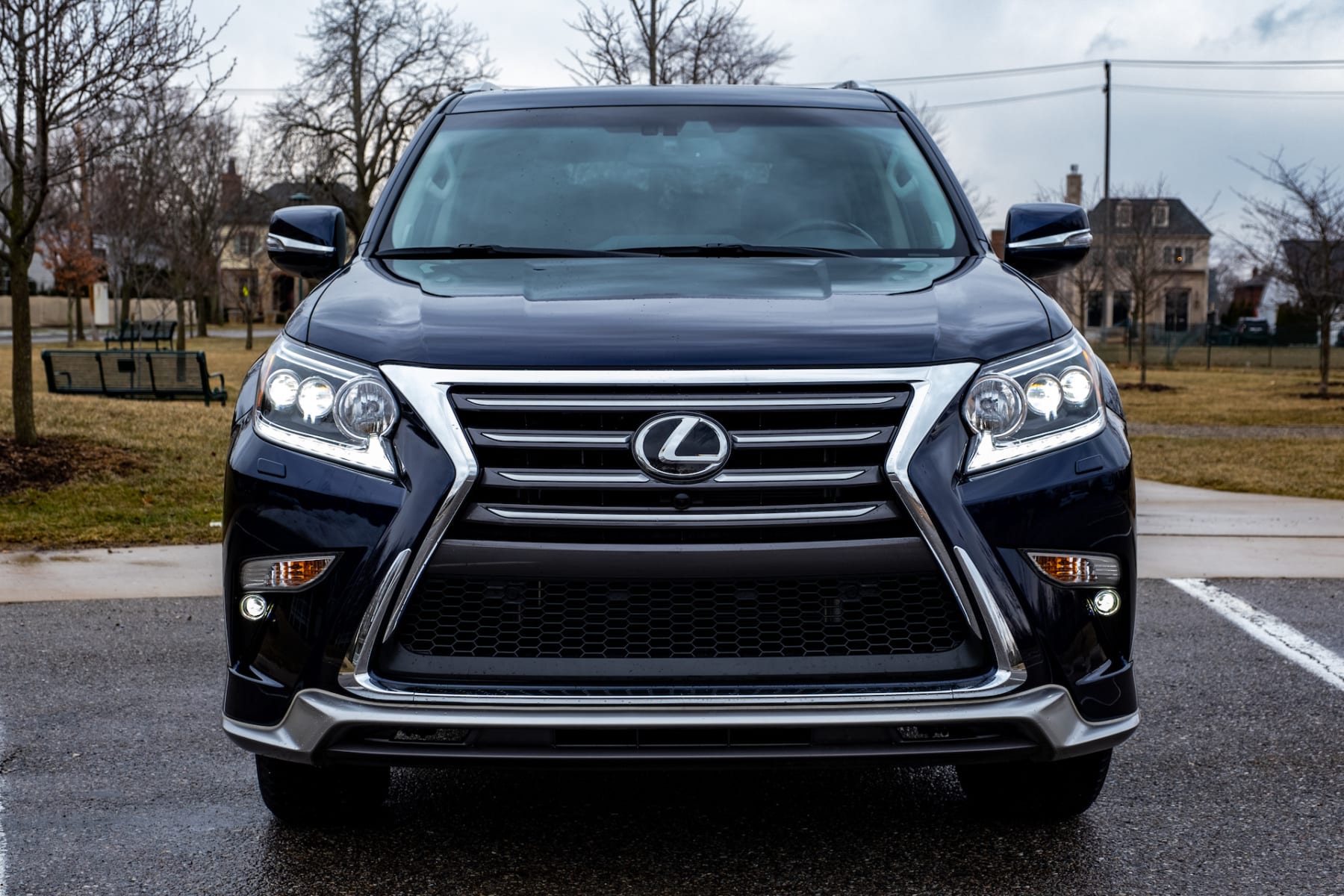 It Has Good Bones

The Lexus GX 460 is a good looking vehicle. Oh sure, the modern shredder grill might not be your cup of tea, but on this vehicle, it works. Or, at least it works for me. Mostly it’s a well-proportioned vehicle. Whereas today it seems everything is getting stretched out in length more and more, as well as width spreading out ever wider, the GX looks fit and trim. The dark blue (“Nightfall Mica,” in Lexus speak) of this example is set off nicely with the chrome accents.

Based on the Toyota Prado (which never came to North America), the Lexus takes that bulletproof body-on-frame chassis and Gucci it up a bit with the suspension as well as the interior. 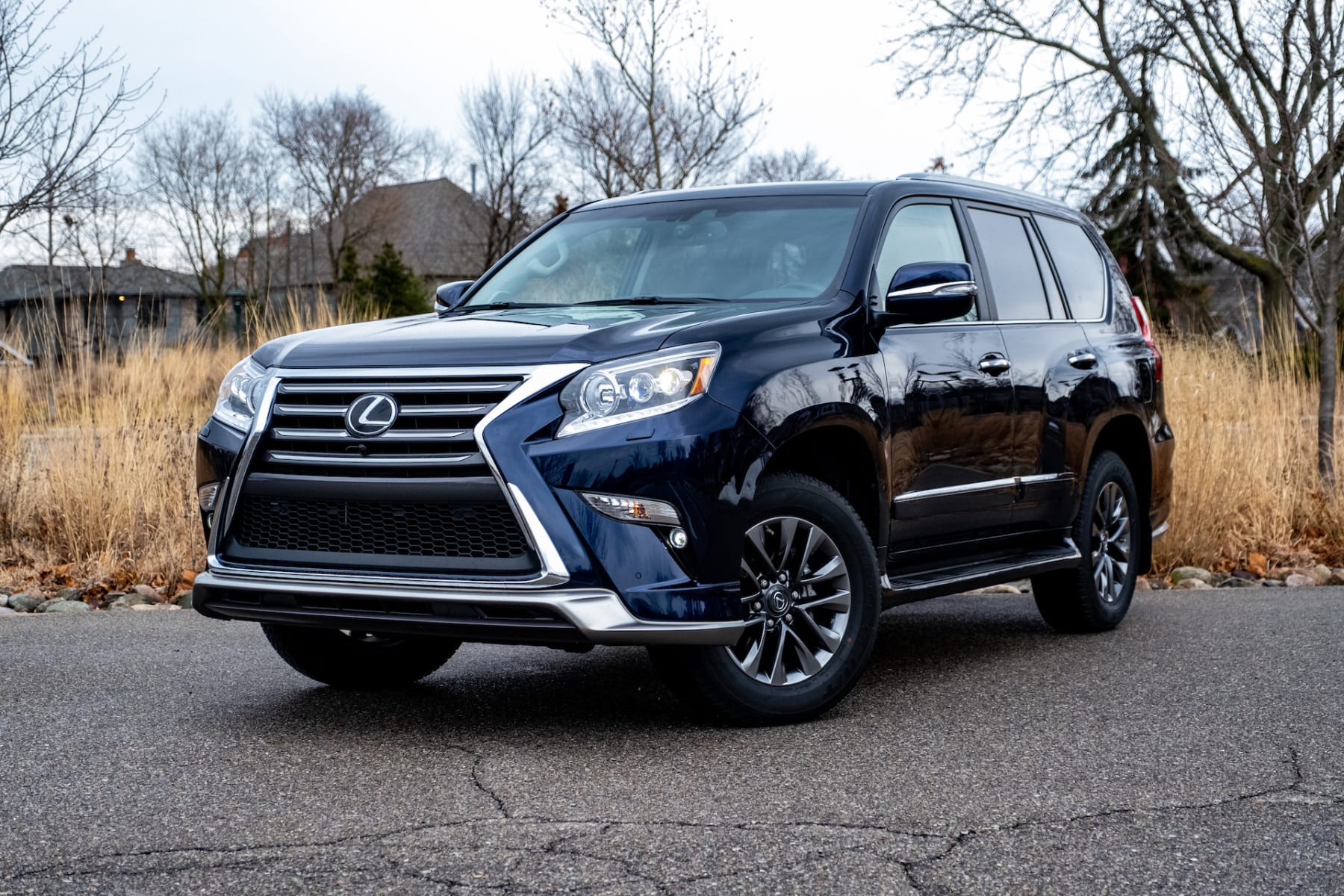 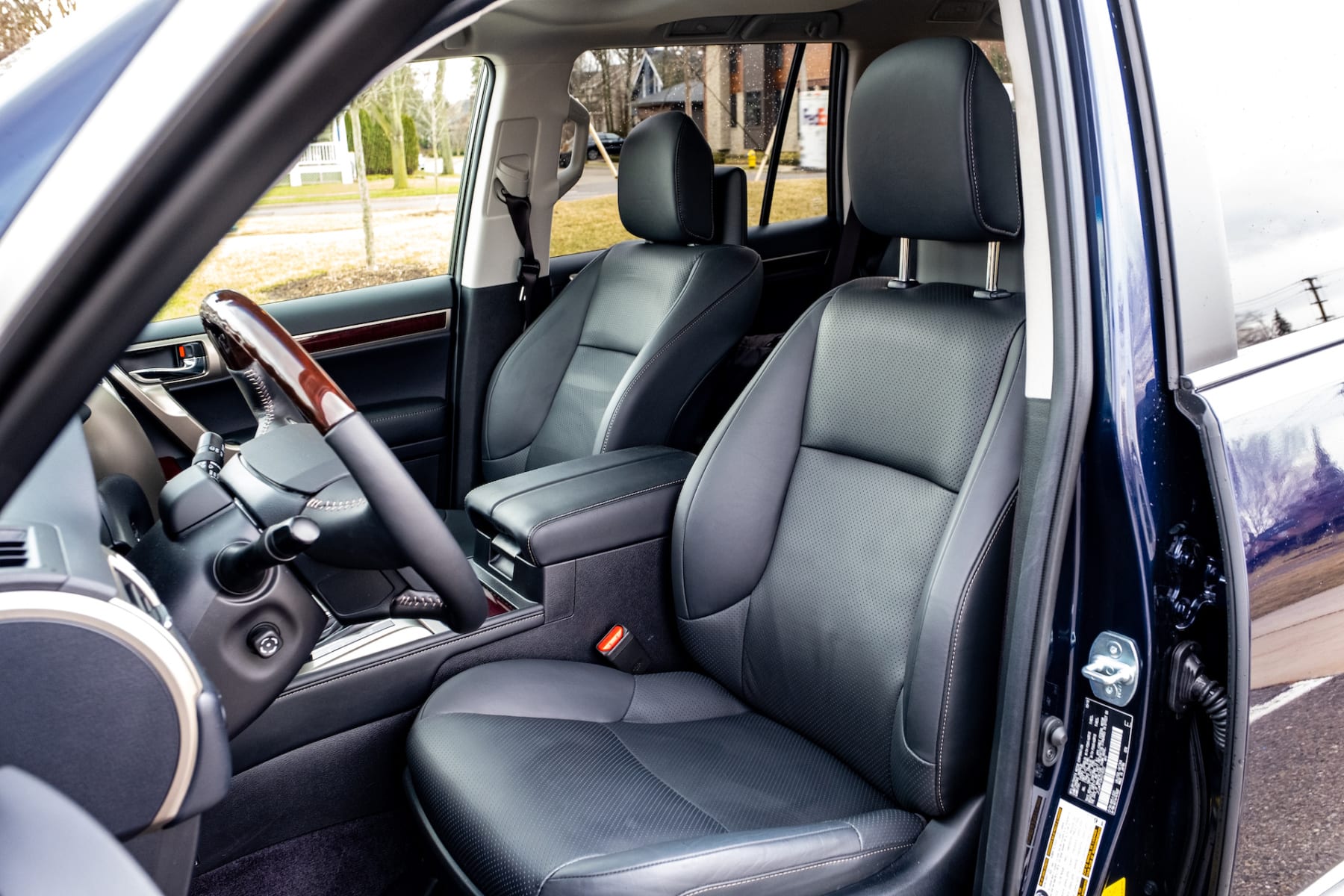 The traditional suspension in the Prado is changed out for an air-ride suspension in the Lexus. With the Prado, you could take at suspension out into the bush for a month and never worry about it. With the Lexus, it’s more tuned for the boulevard. It is certainly capable off-road with its permanent four-wheel drive with a center-locking Torsen differential. There are hundreds of people who take the GX overlanding all throughout the U.S. The hardcore crowd do switch it out though for the traditional Prado springs. However, few people who buy the GX new will do this; it is more the second and third owners of the GX who will kit them out. 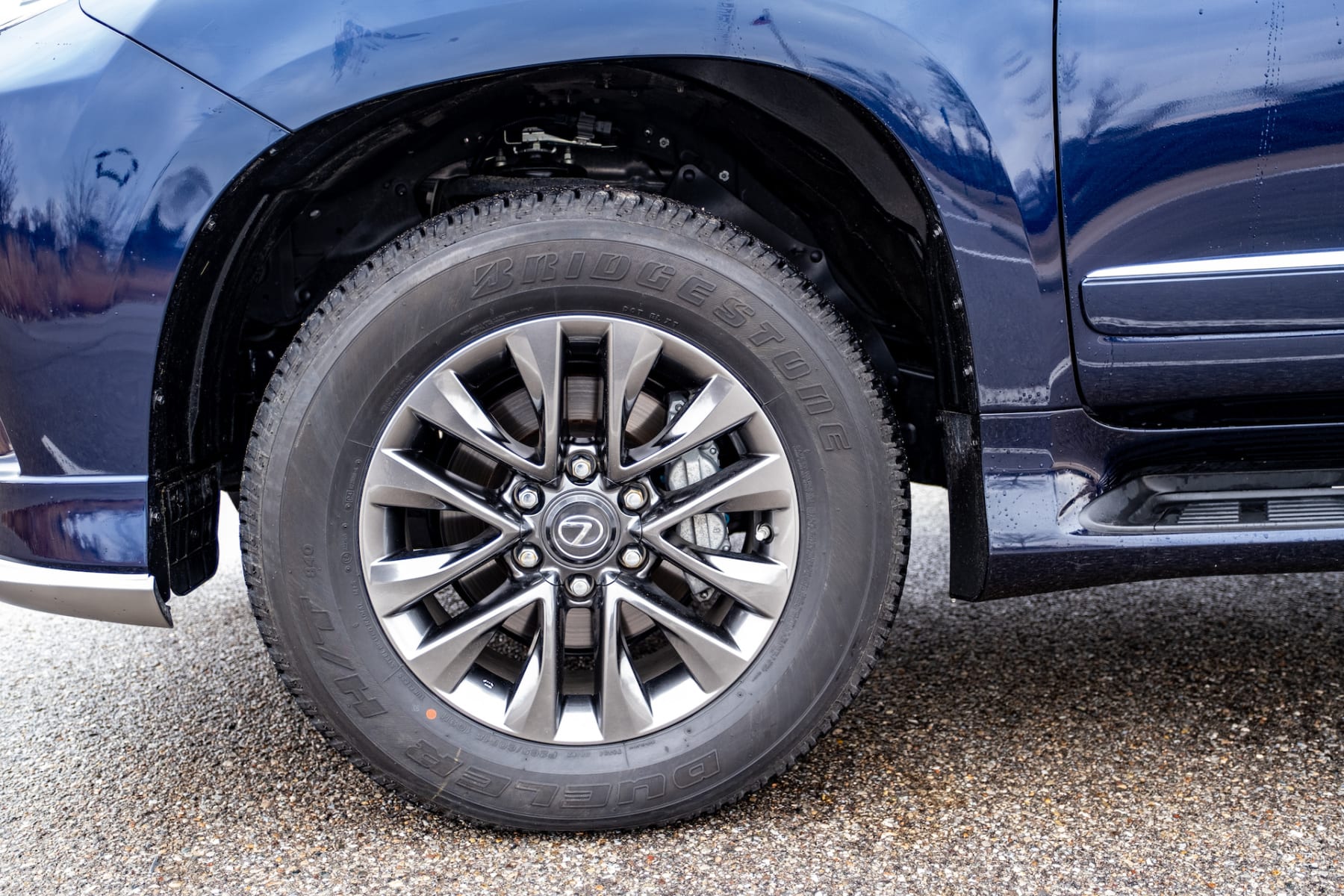 For its intended audience, the suspension of the GX is quite good. It does a nice job of balancing firm with comfort and keeping body roll well under control. You sit up high in the GX; it’s a step up into the cabin. The driving position feels perched on top, rather than within. Given how tall the GX sits, and its 5,500-pound curb weight, it’s quite remarkable how well composed it is.

Inside, as far as materials go, they are fantastic. If you get out of an Escalade and jump into a GX, materials wise, the Caddy is laughable. But let’s get to the tech. 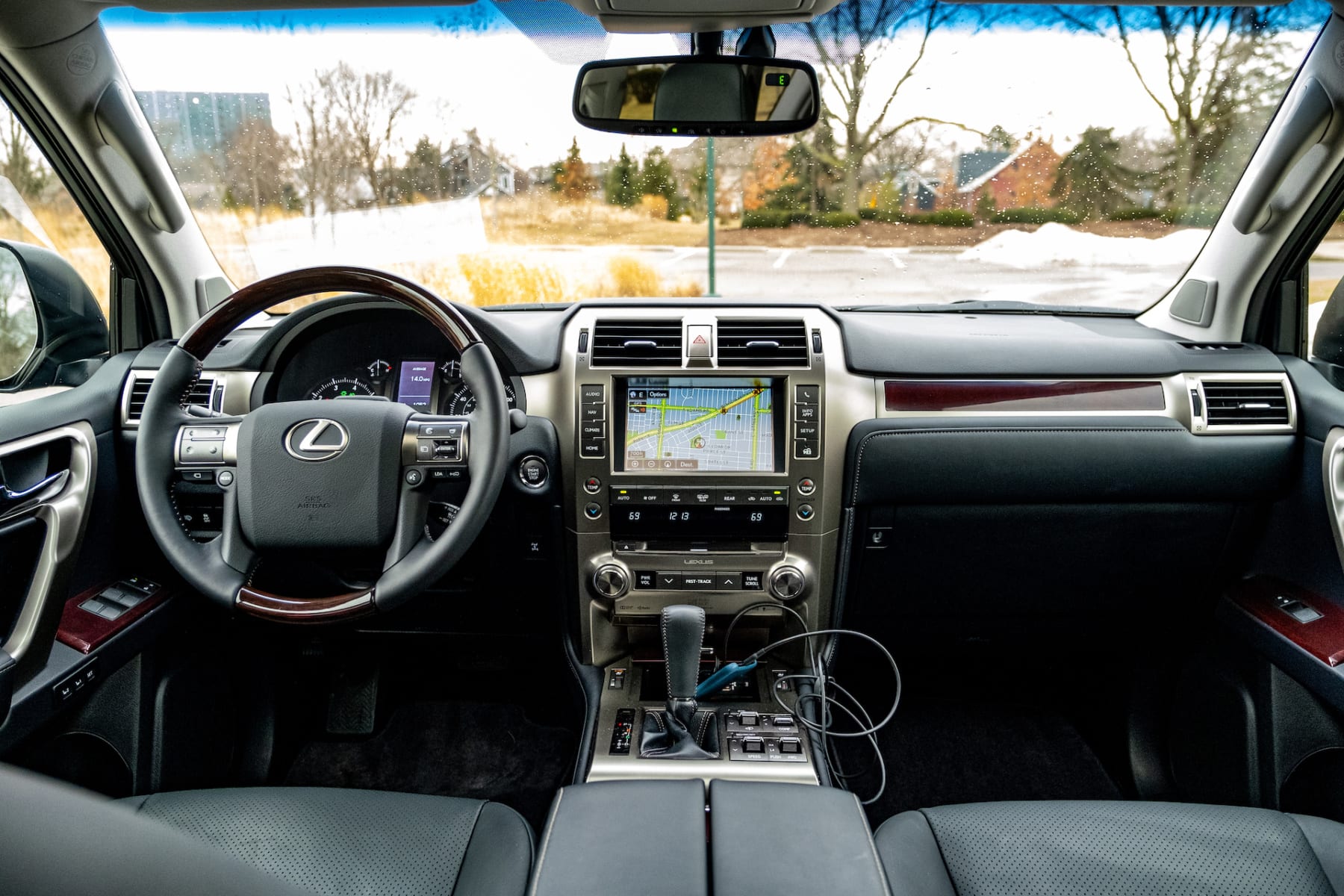 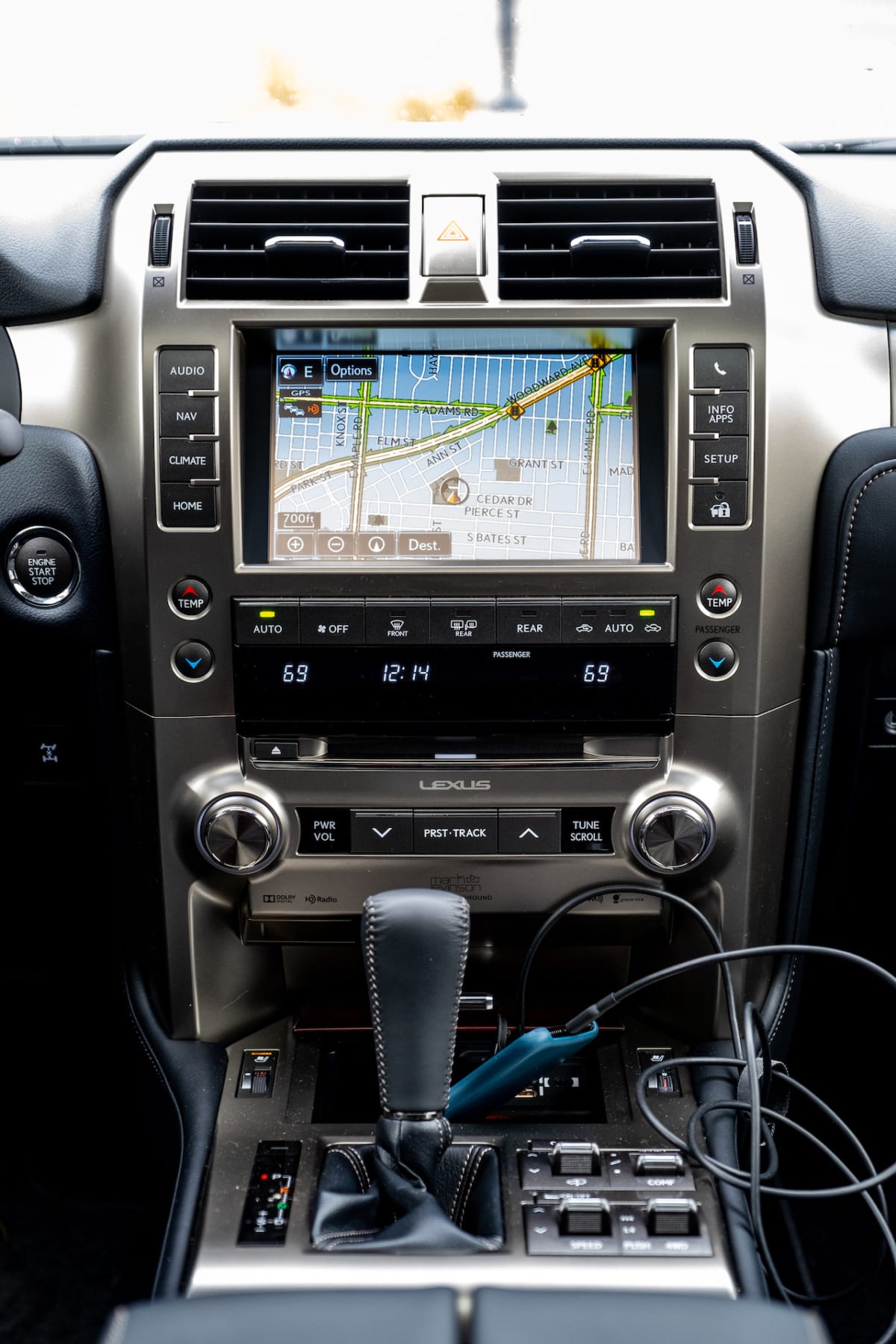 Slide behind the wheel, and it’s “Welcome to 2008!” While a reasonable size, the screen for the infotainment system makes the first iPad look like an OLED display. The actual software and processor in the system are at least two generations old. If you are used to how responsive your phone is if you’ve purchased a new, higher-end one in the last two or three years, then go back to a phone that is six or seven years old, and then you will understand what I mean by a “sluggish feeling” interface.

While I do appreciate all the buttons and knobs over touchscreens, or the Lexus mouse or touchpad, the layout is a little jumbled. Pictures can not do justice as to how dated the tech looked and felt. 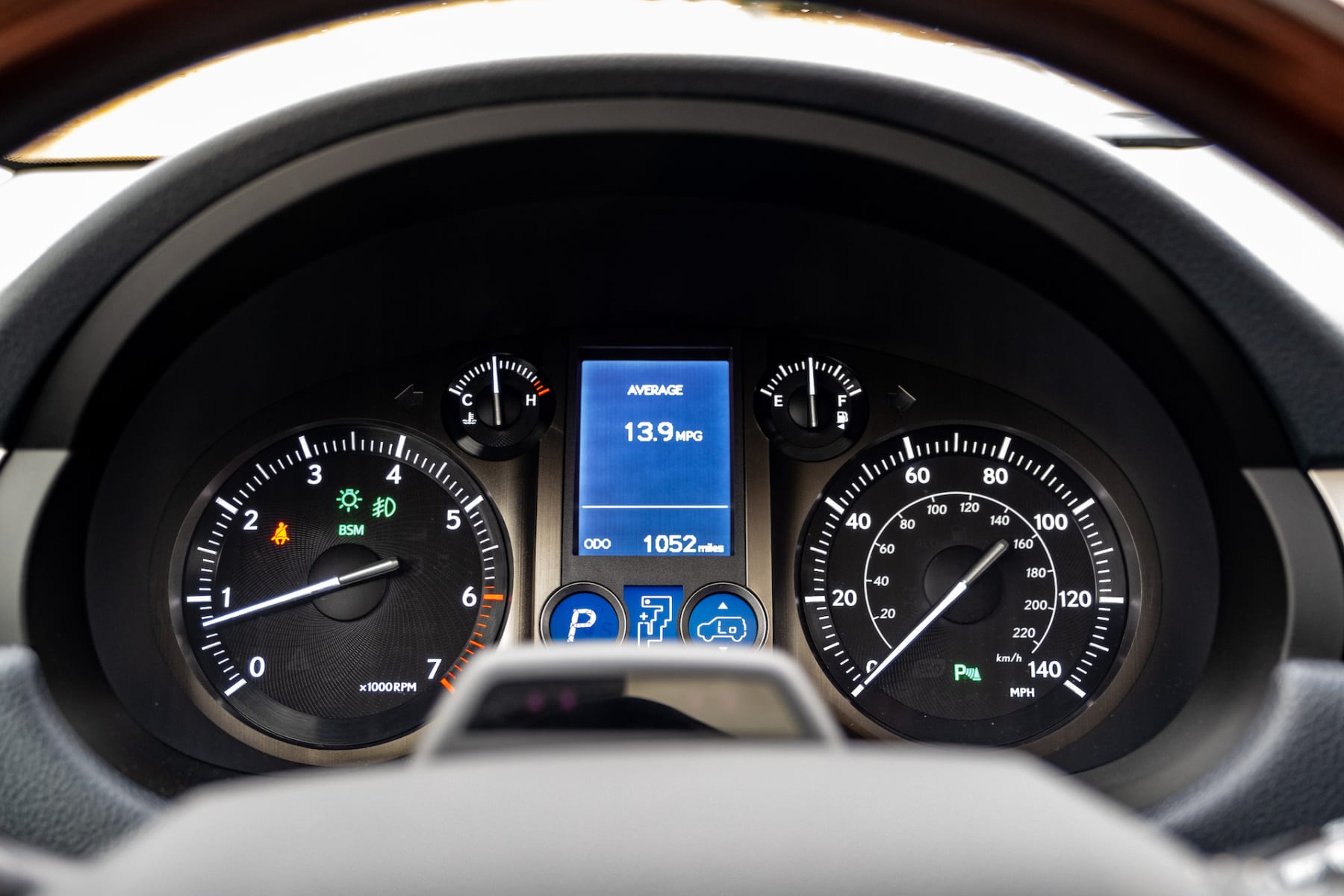 Also, retro is the fuel economy. The 4.6-liter V8 makes 301 horsepower and 329 ft/lbs of torque, so the actual thrust of the vehicle is quite good. But again we go to shape, size, and weight. The EPA rates the GX460 at 15 city/18 highway/16 combined. It takes a lot of fuel to move the GX and the EPA numbers were pretty close. We did a little under 14 in the city and right about 18 on the highway.

One of the quirky, or “non-traditional” items in the GX is the rear door. It opens left-to-right rather than up-and-down. Depending on how and where you are parked, it can make loading the rear a bit awkward. (Editors Note: I love me side-hinged door on my Montero. Even if I’m hanging too much weight off the tail.) 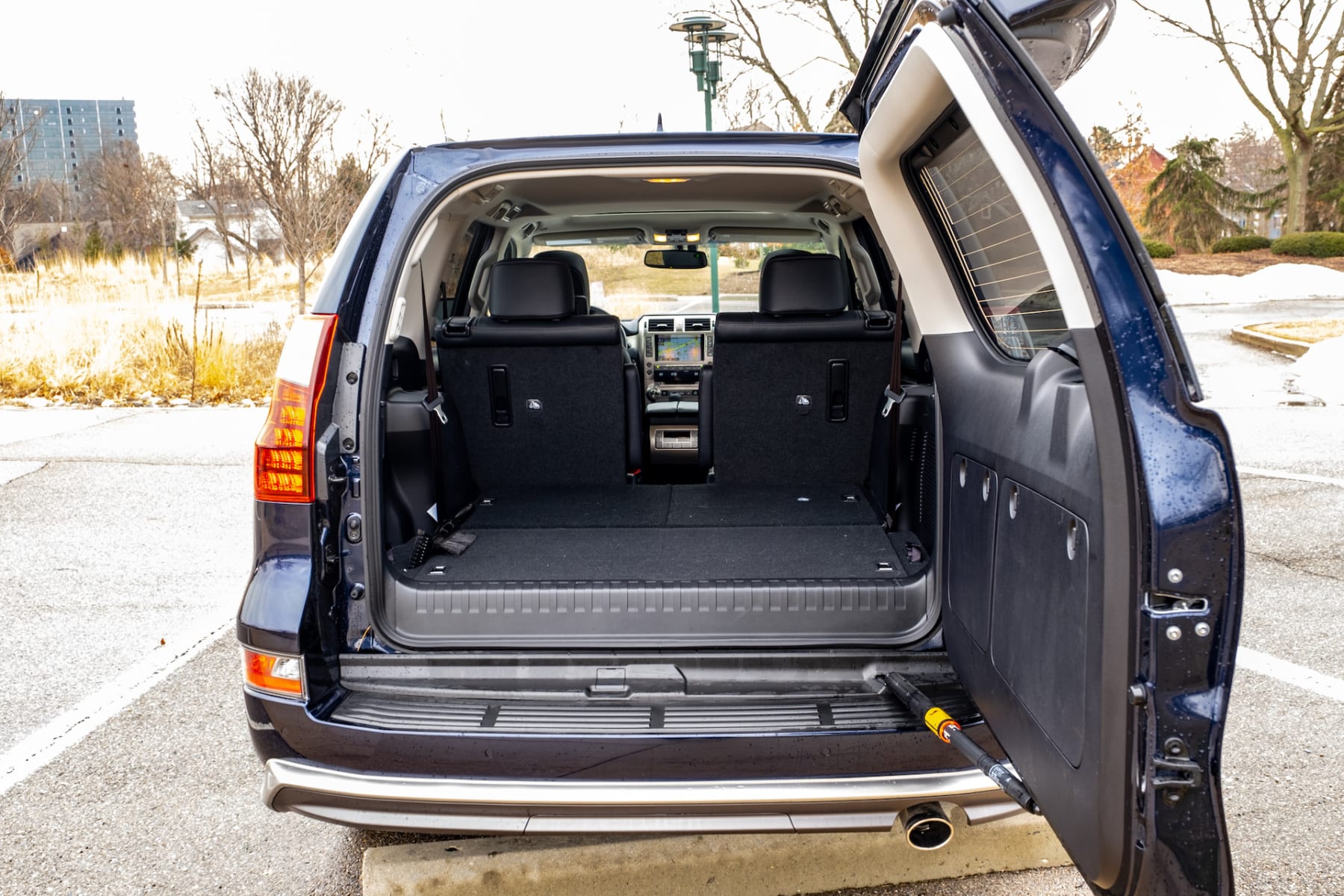 The GX is a three-row crossover. I failed in my journalistic duties because I didn’t crawl back into the third row to see how tight or uncomfortable it was for normal-sized adults. In fact, for my time with the GX, the third row was folded flat. The second-row captain’s chairs were comfortable with plenty of legroom.

Here is the thing about the GX: I’m generally not a fan of crossovers and SUVs, especially large(r) ones. Even given the out-of-date tech and the terrible fuel economy, I have time for this one. 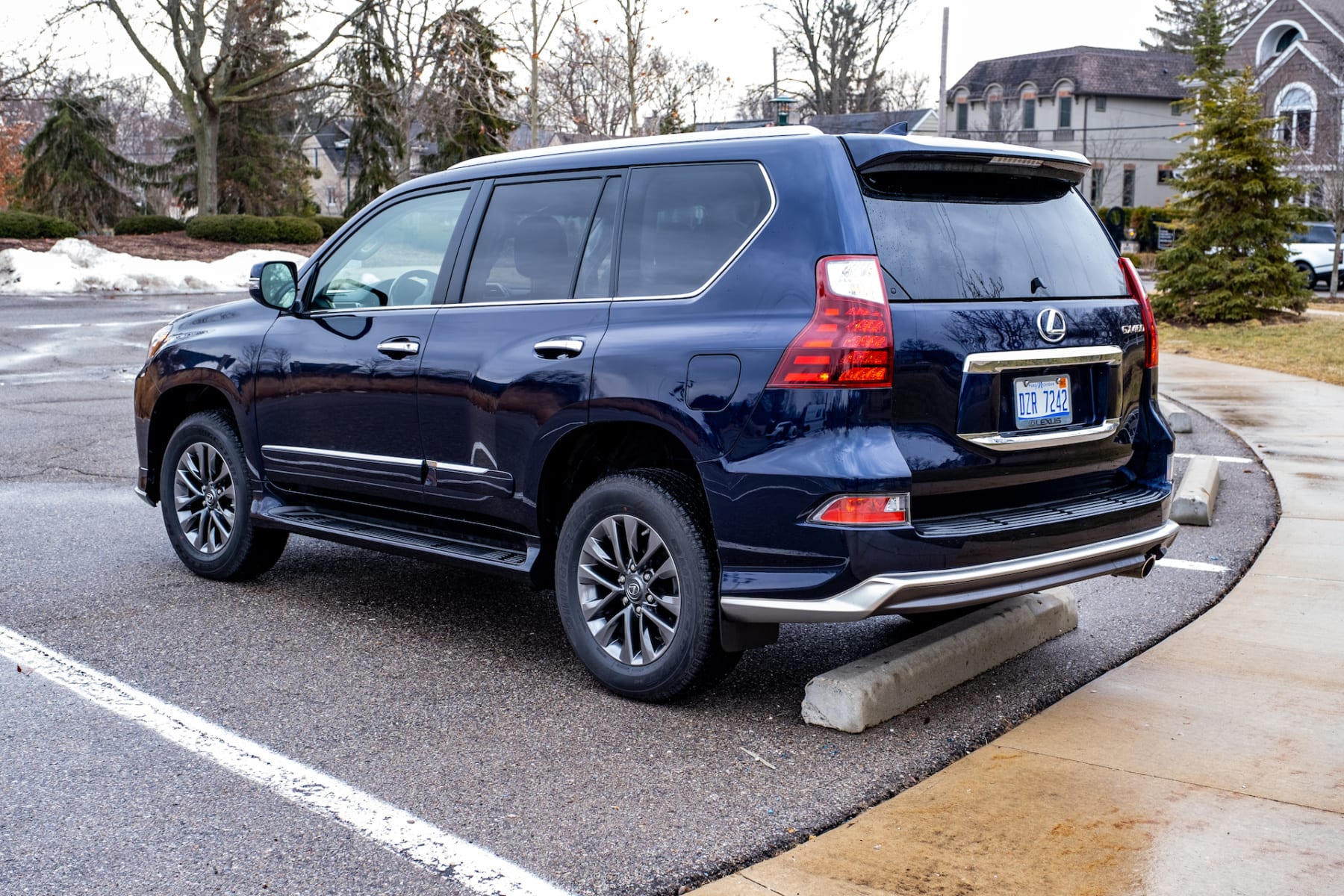 The level of comfort and sophistication in the driving dynamics makes this an excellent vehicle for endless miles on the highway, or negotiating the atrocious infrastructure of most cities in the U.S. That this GX is built in the old Lexus quality and style in Japan gives you the confidence to believe it will go half-a-million miles plus with few, if any, issues. With an as-tested price of $70,840 in its class, it feels like a bargain. A GMC Yukon Denali similarly equipped will run you close to $80,000, and it’s not as good.

In the end, if you are in the market for an old school, traditional body-on-frame SUV, you do owe it to yourself to go to a Lexus dealer and test drive a GX. Yes, our demand for the latest and greatest tech, especially at this price point, may be a deal killer for you. However, you may end up being surprised by an option you had not even considered before. 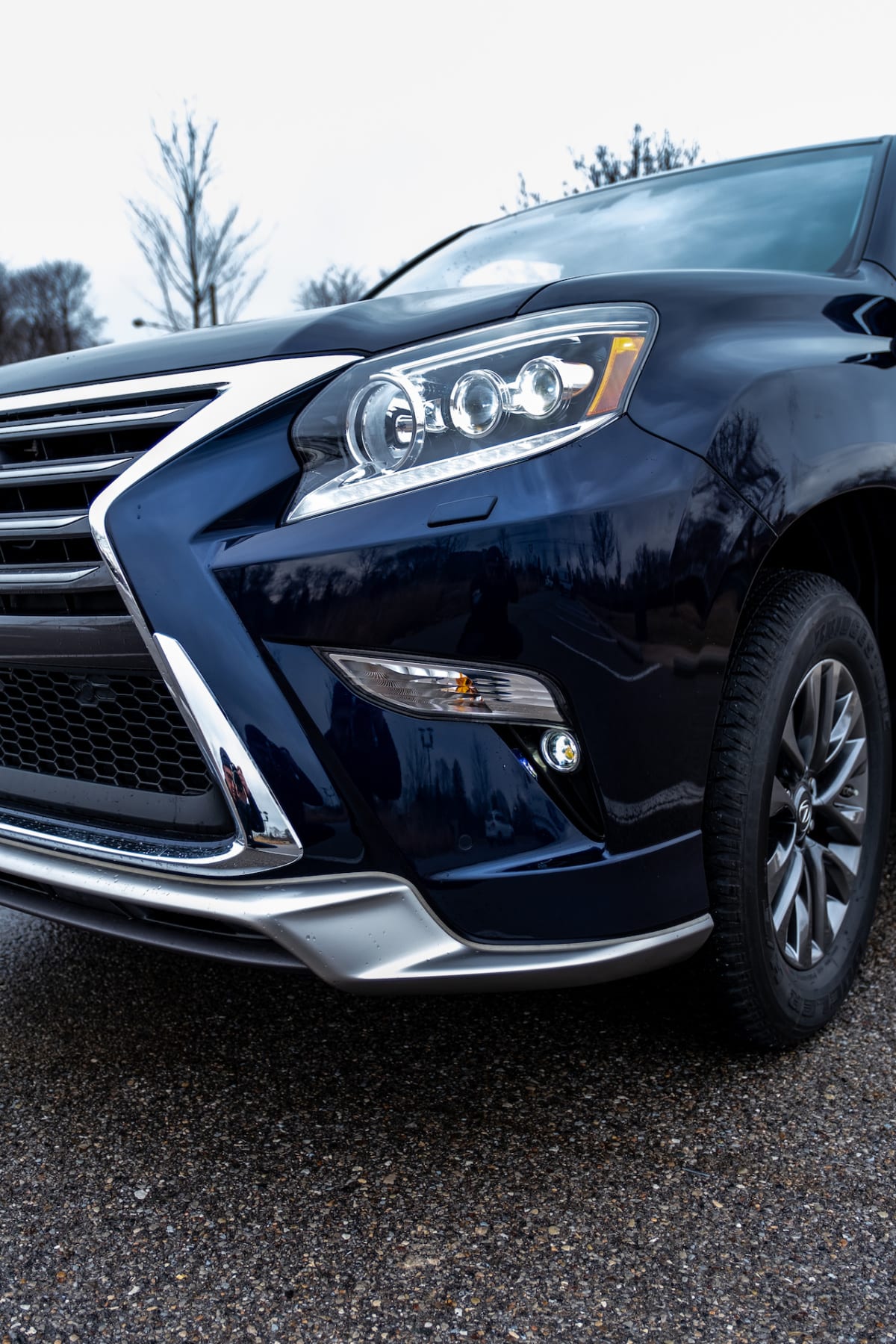