It seems all new vehicles have to be crossovers or SUVs.  This trend has made sedans, wagons, and pretty much every other interesting car disappear from the market, for this reason, I have a general disdain for them.  There are a few exceptions that prove the rule, but they have to do something special.

Toyota Land Cruiser, Lexus GX, and to an extent the Chevy Suburban are the standouts.  This Mercedes-Benz GLB250 may be joining that very shortlist for me. Think on this for a moment, you turn in the AMG GT63S and get the GLB250 in return, what are your expectations?  Almost anything is going to be a big comedown from that.

I did request this vehicle because it is one of the best selling vehicles for Mercedes right now. I wanted to see if the GLB was just a crossover with a Mercedes badge, or if it truly is a Mercedes. 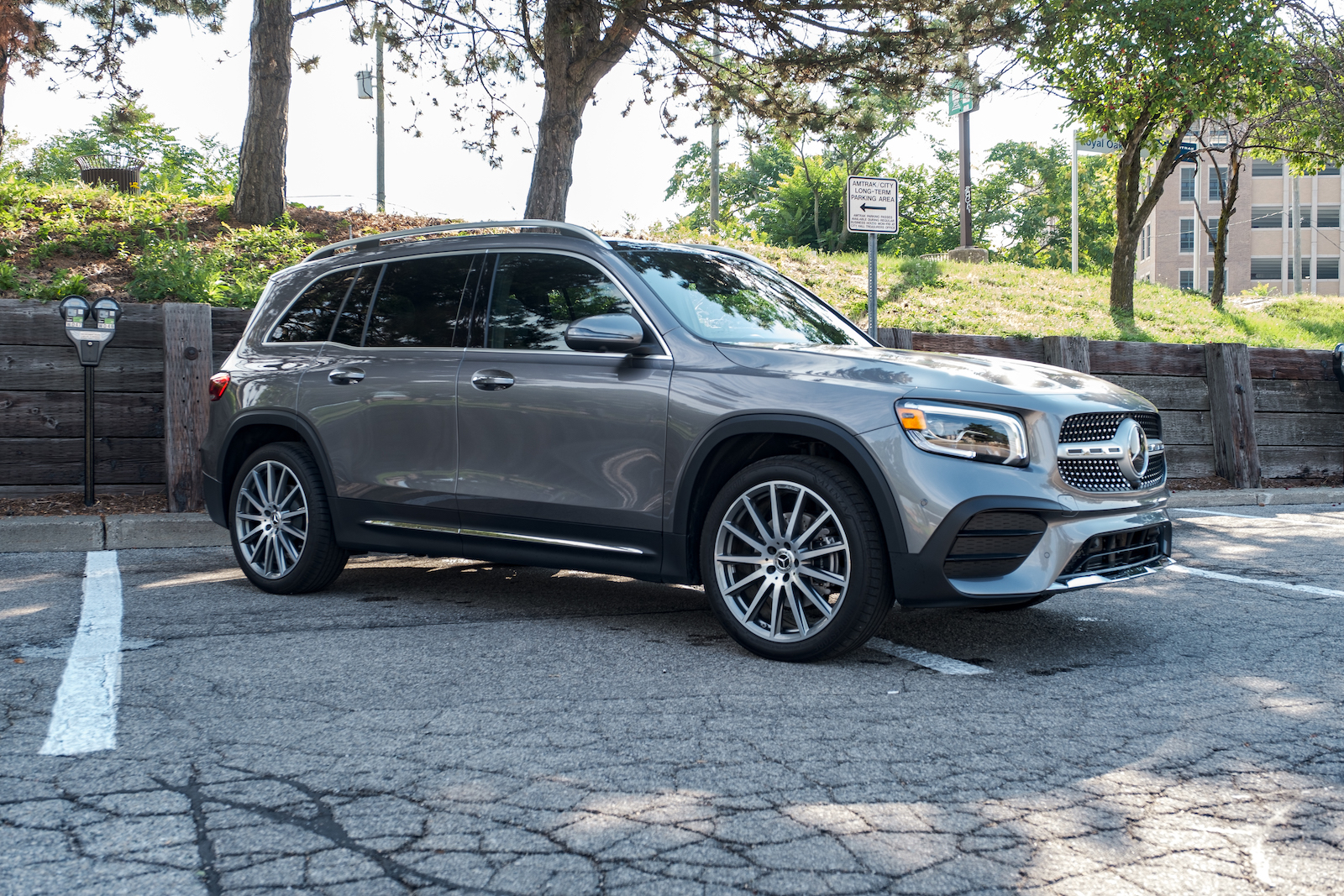 The exterior size of the GLB is spot-on perfect in my eyes.  Every model revision is longer, wider, taller.   The GLB is in the Goldilocks zone.  Big enough to be useful, but not so large that it’s a pain in the ass to drive or park in tight spaces.

While it has a high beltline, there is a good amount of glass above it for better visibility and letting light into the cabin.  A quick look inside reveals nice materials, the back seat room is generous and the rear cargo area is larger than expected.

Slide behind the wheel and you can see a direct connection to the interior style and layout in the GT63S.  The sound when you close the door, it has the Mercedes solid thud.  The layout and feel of everything seem very nice on the first look. 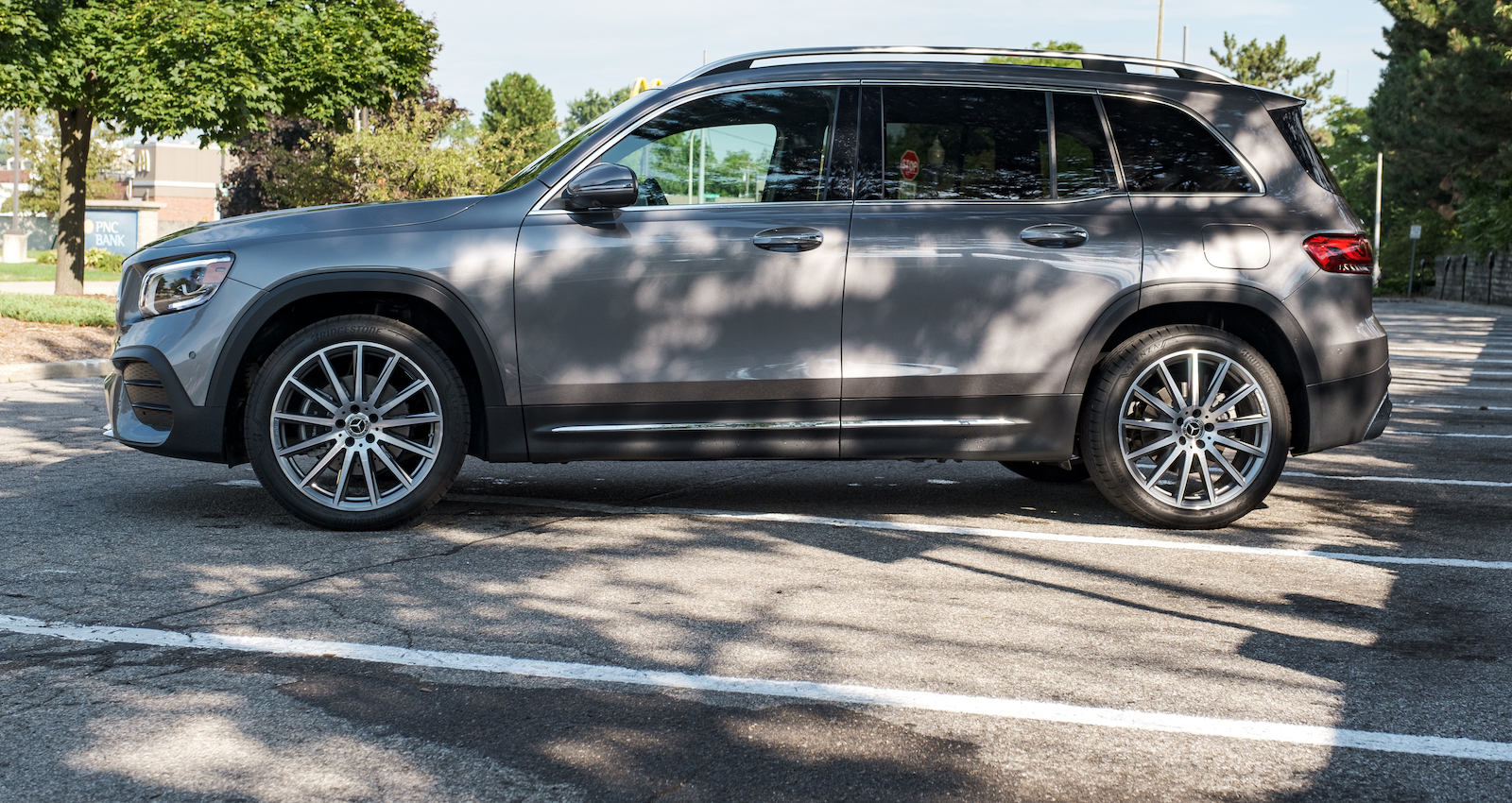 The GLB looks like a slightly scaled-down GLE, not a bad thing.  Proportions are good, the only area that looks off is in profile behind the C-pillar.  That area seems a little short compared to the length of the front and rear doors.  Generally from profile though, it’s a handsome vehicle.

From the front, the grill and the daylight running lights surrounding the headlights defiantly give the GLB a more expensive, premium feel.  The front three-quarter view has a very purposeful matter of fact look.  It’s not trying to be something it’s not.

The rear and the rear three-quarter view continues the mater of fact styling, but again giving it a look of a larger more expensive GLE. 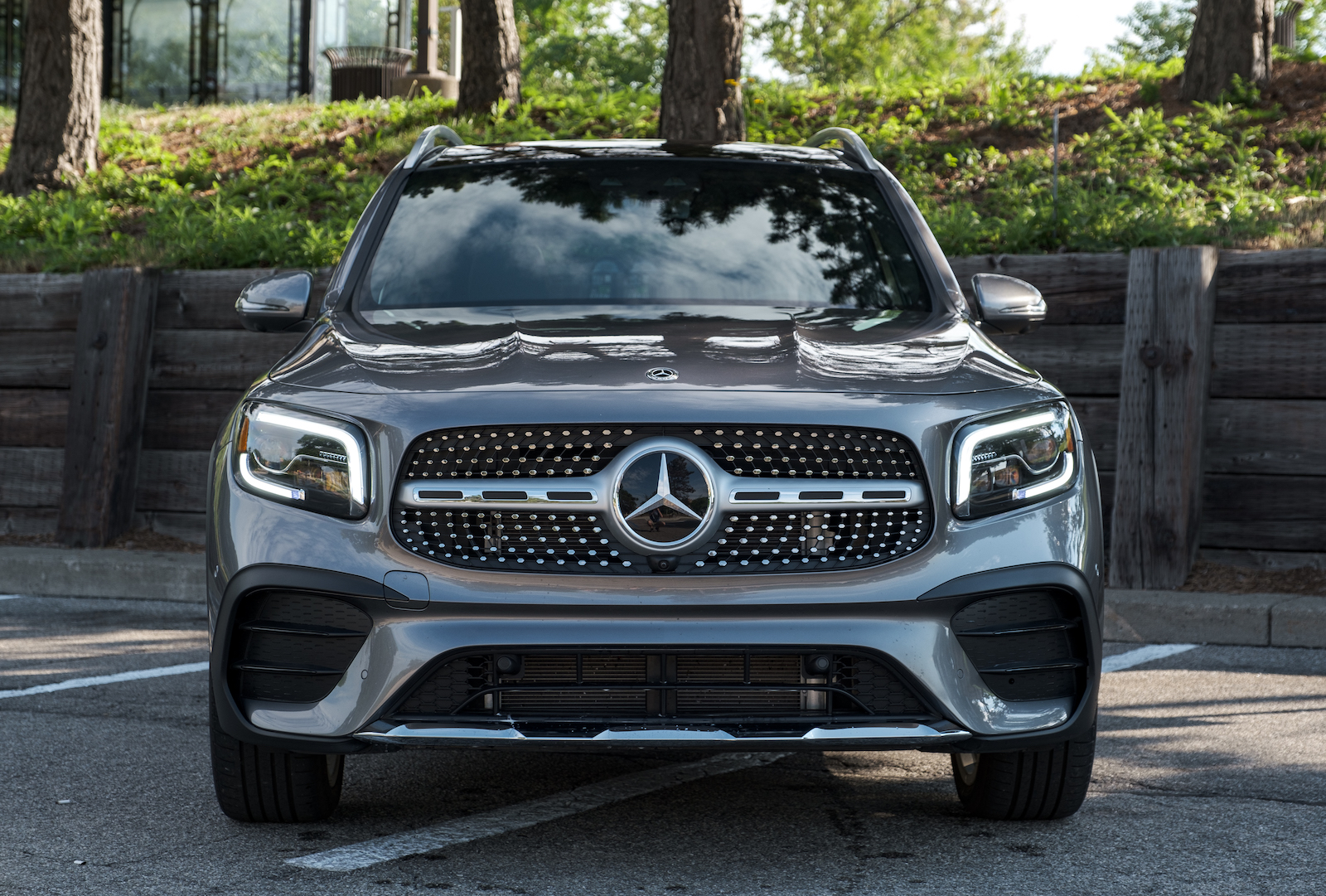 Slide into the GLB and you immediately notice the quality of the materials at play here.  Significant amounts of Alcantara, leather, and soft-touch materials abound.  There are only a few places where you find hard plastic, but those are not in high touch point areas save for the B-pillar where you grab the seatbelt. 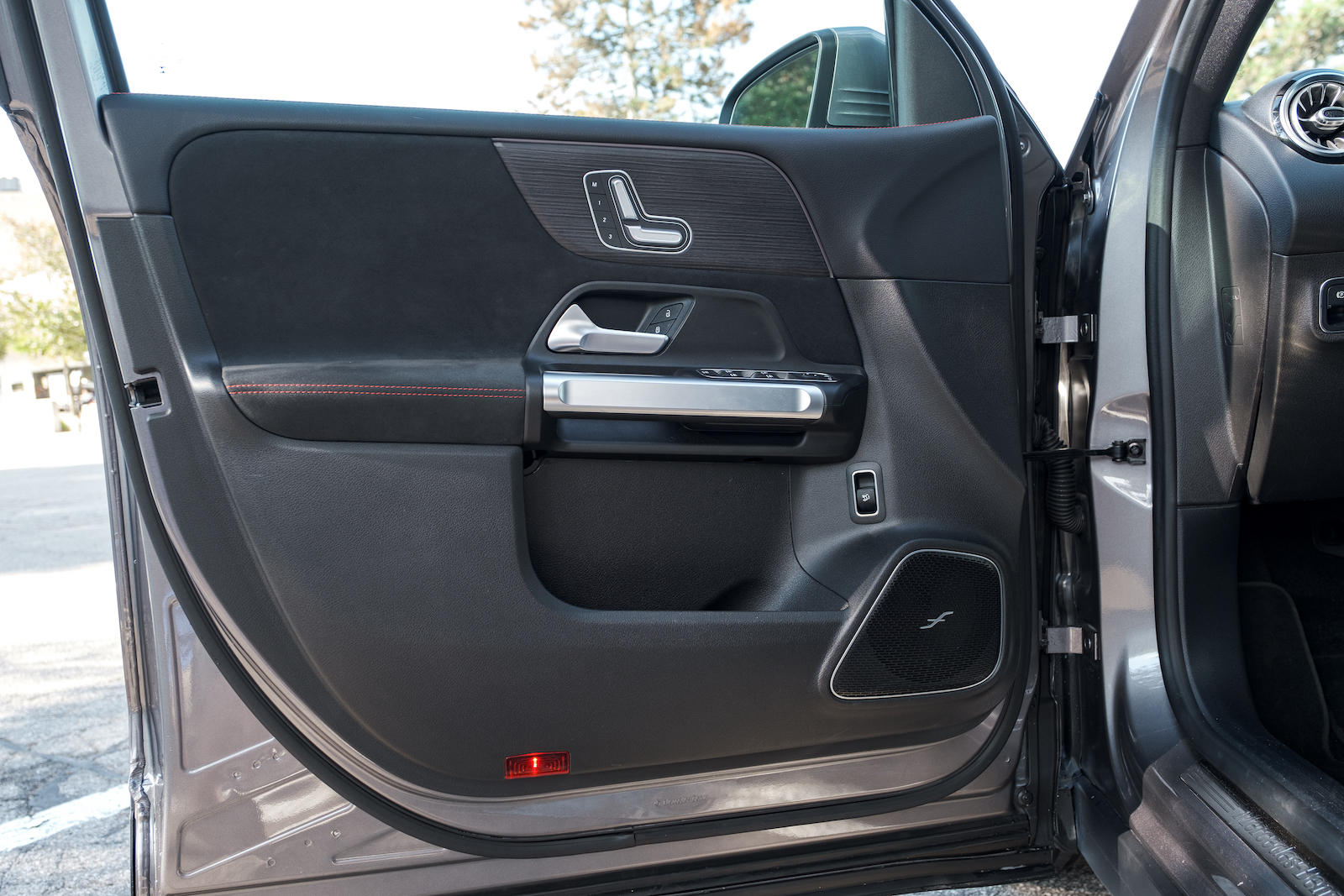 A small miss is in the lower portion of the doors.  While the upper portion is quite nice with the aforementioned Alcantara and wood trim, the lower portion is hard industrial-grade plastic.  That isn’t the issue.  The problem is that there is no lining inside the pocket of the door.  In a premium brand, at this price, you’d expect that.  It makes a large difference in something rattling around making noise or being well damped.

The seats are comfortable with a multitude of adjustments.  Manual adjustment for thigh and knee support is welcomed.  They are covered in a combination of Alcantara and leather with red stitching.  The tradeoff, at least in the model I tested, was the seats were neither heated nor cooled.  Given the material, it is probably not an issue so much in the cold weather.  However, it is easy to see in hot weather climates where cooled seats would be welcome. 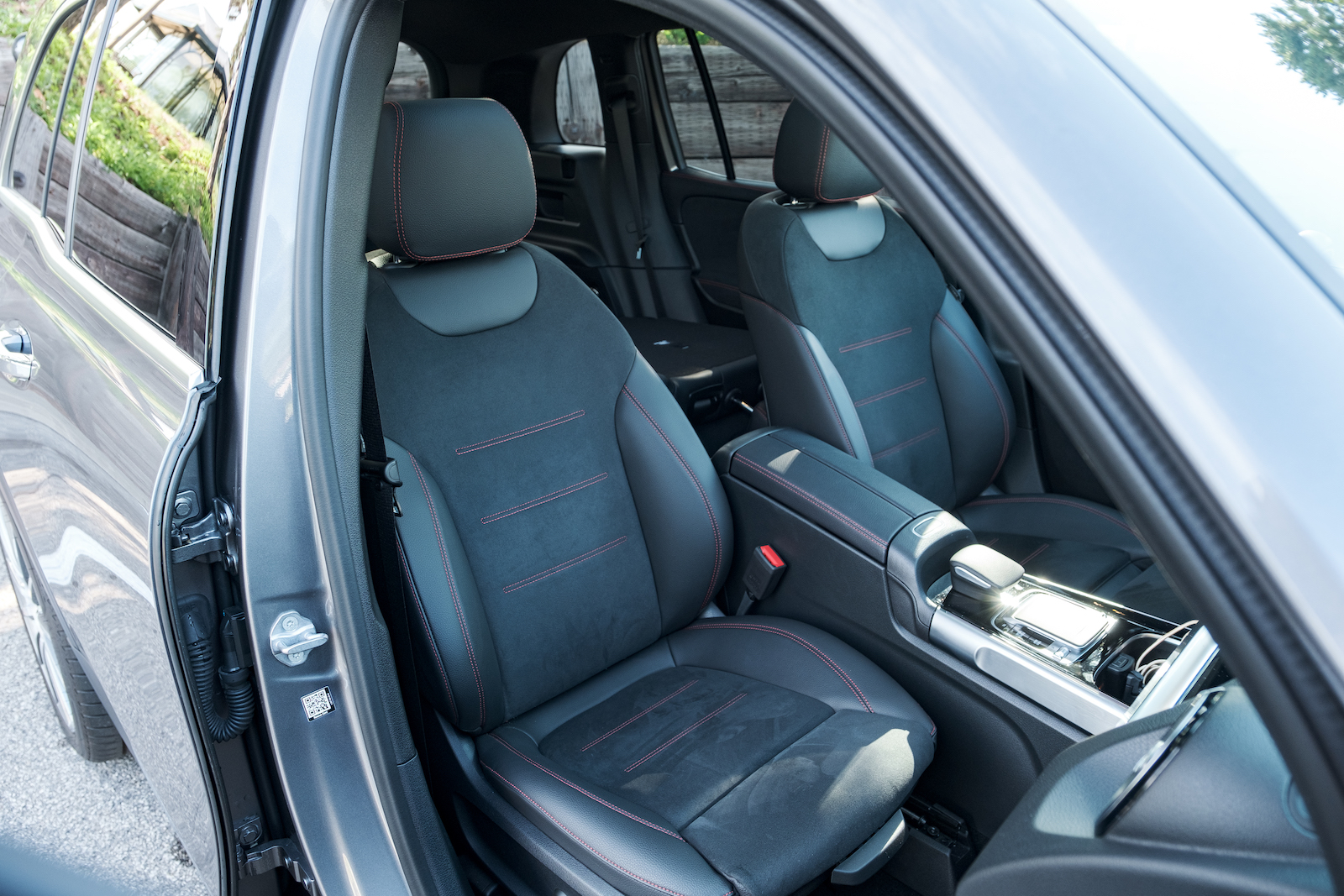 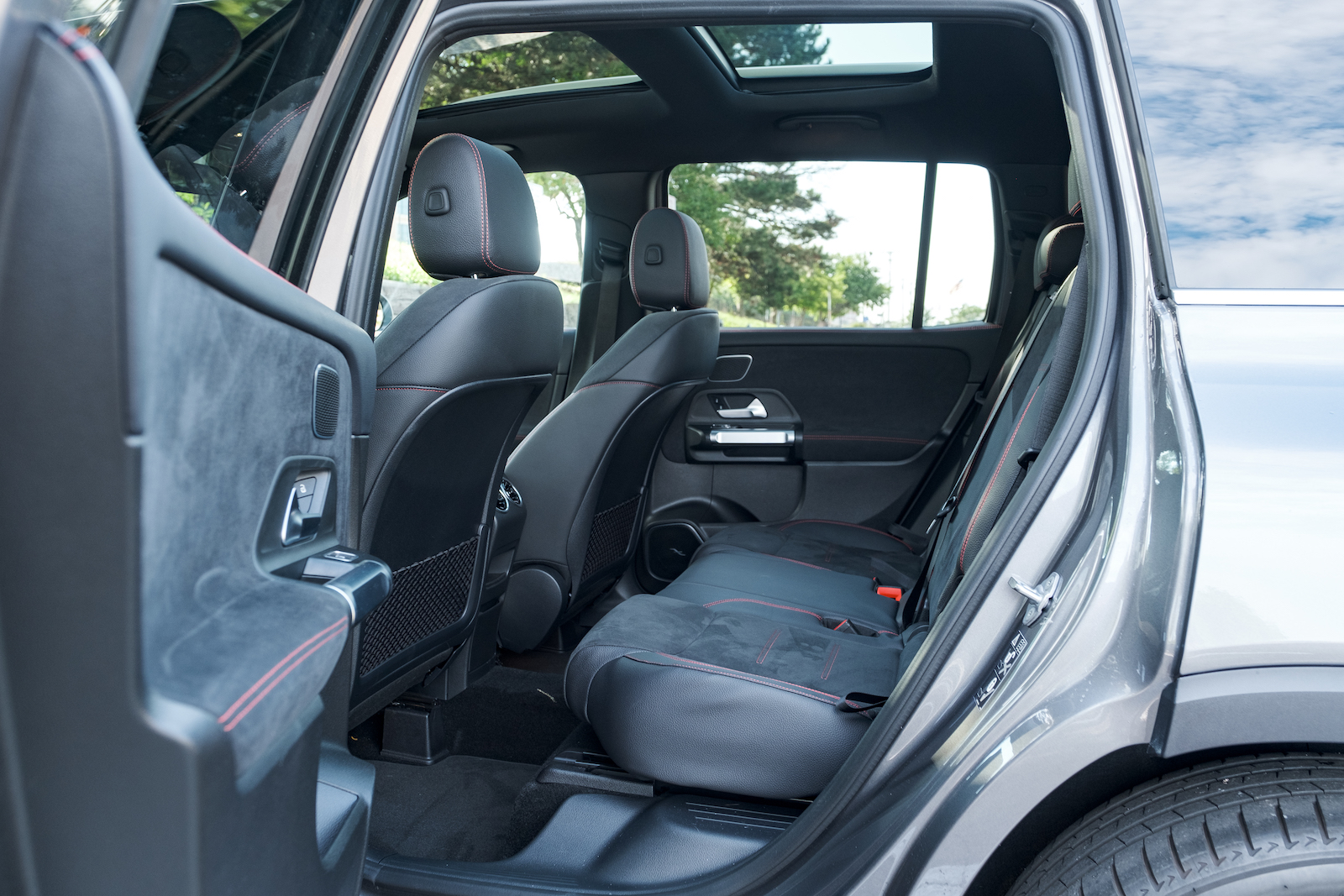 The rear seats mimic the front in materials.  There is good legroom in the second row.  There were over ten inches of room from the front of the bottom cushion to the back of the rear seat when it was adjusted from me at 5’10”. 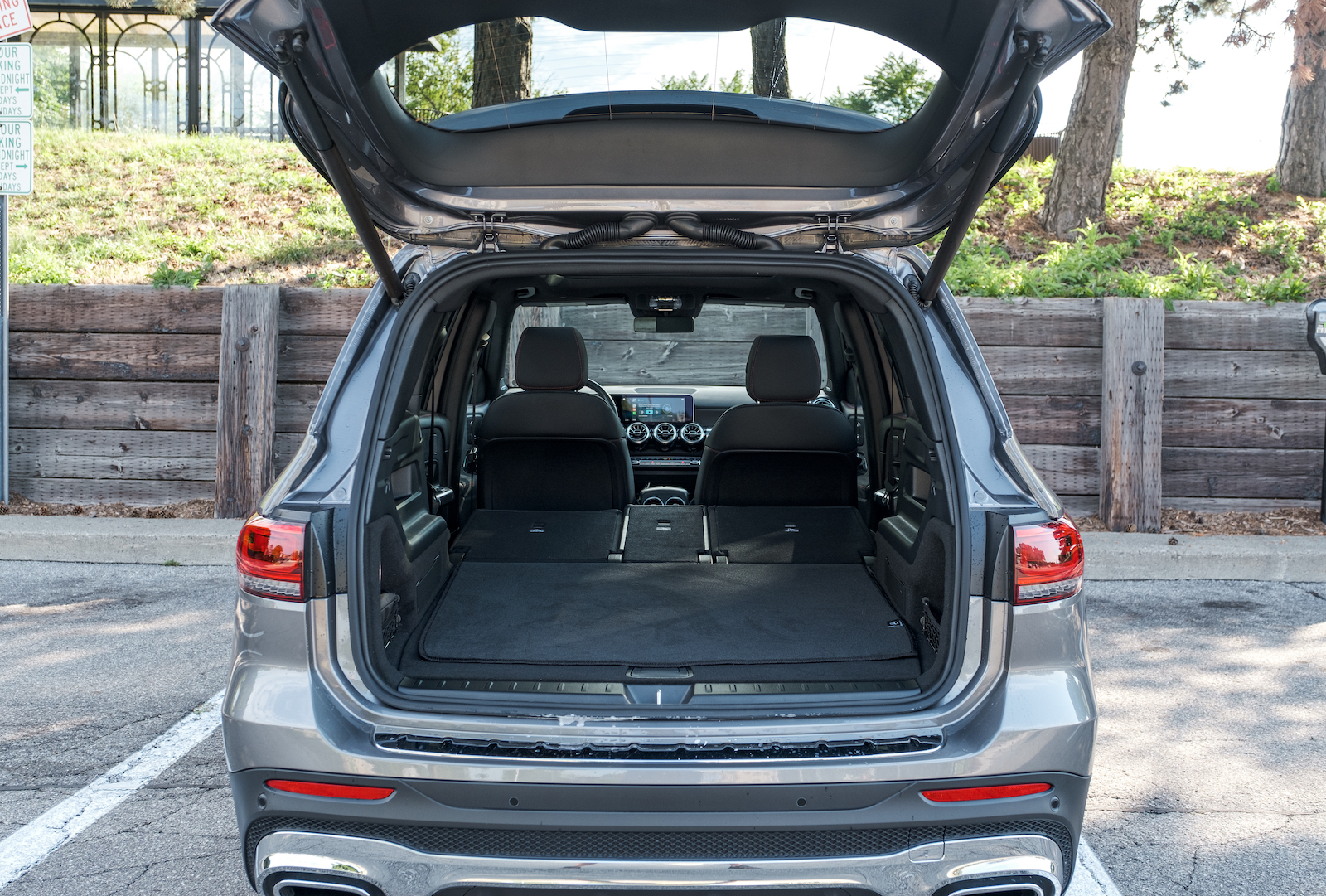 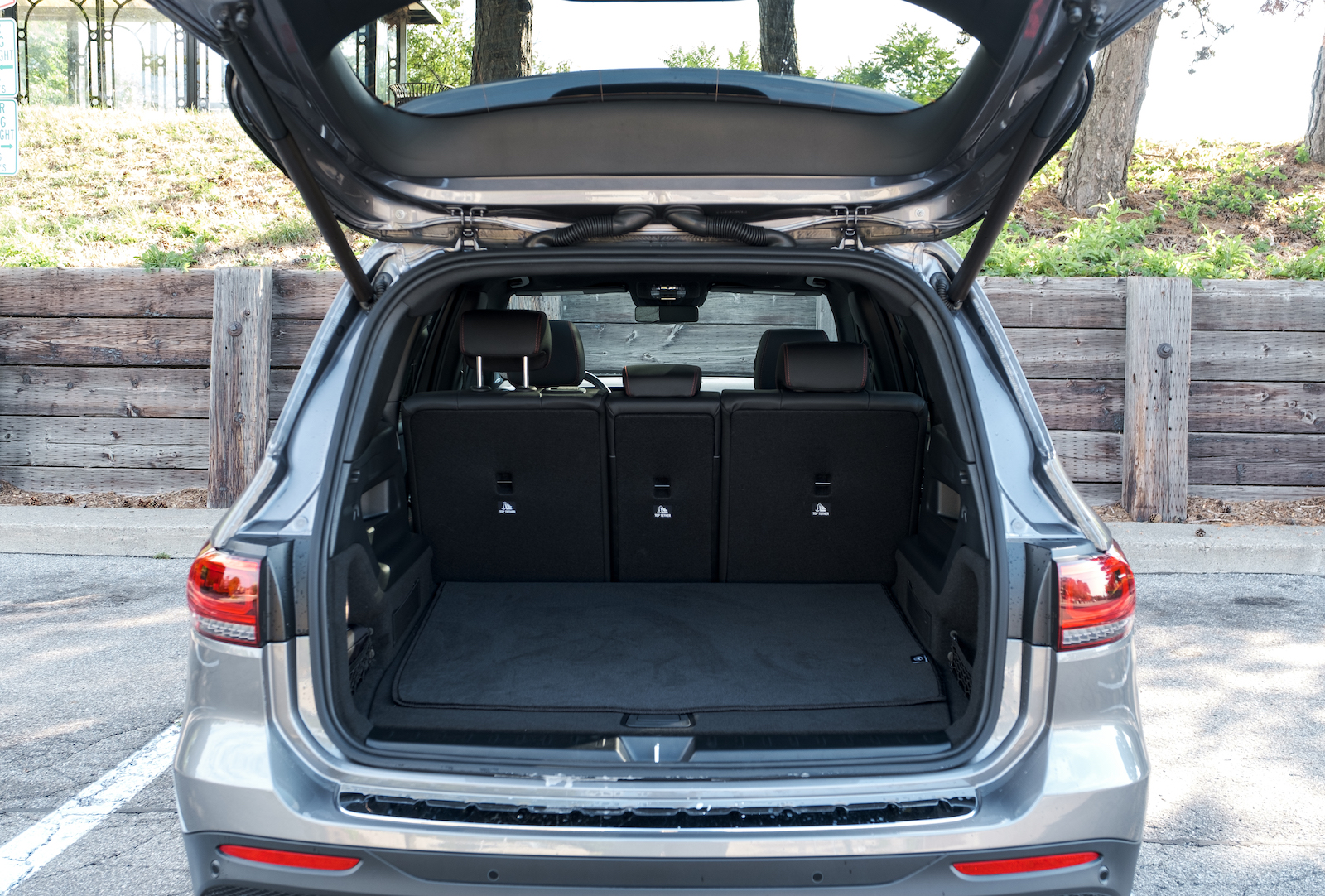 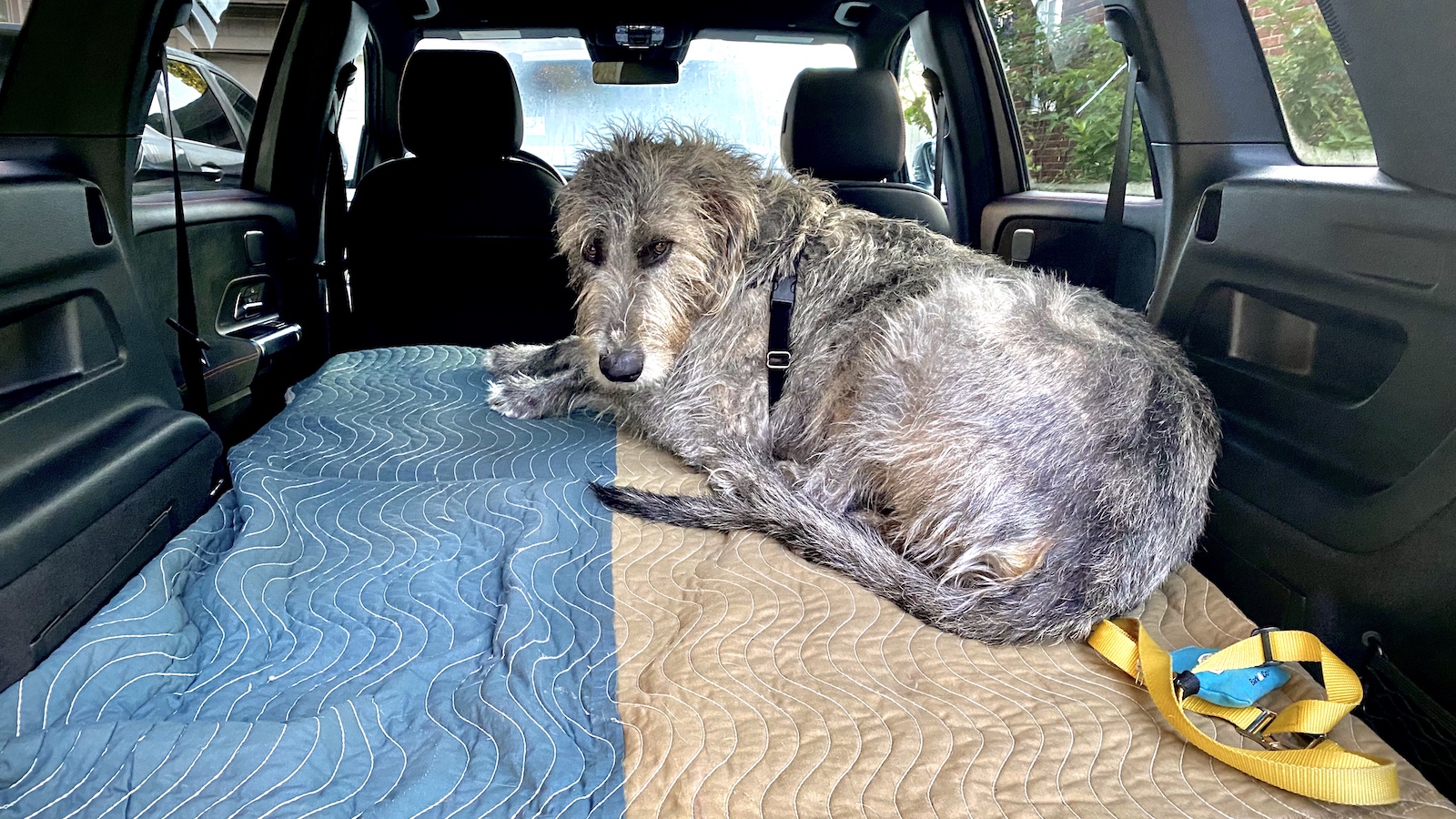 There is a very direct design carryover from the AMG GT63 to the Mercedes-Benz GLB250.  The same large swath of glass for the interments and infotainment screen is mirrored, though slightly scaled down in size for the GLB.  The horizontal trim with the turbine-style vents is also mimicked here as well.

The 10.25-inch instrument cluster has several choices of looks and layouts depending on which drive mode you select.  The display is bright, glare in direct sunlight isn’t an issue, and communicates information well. 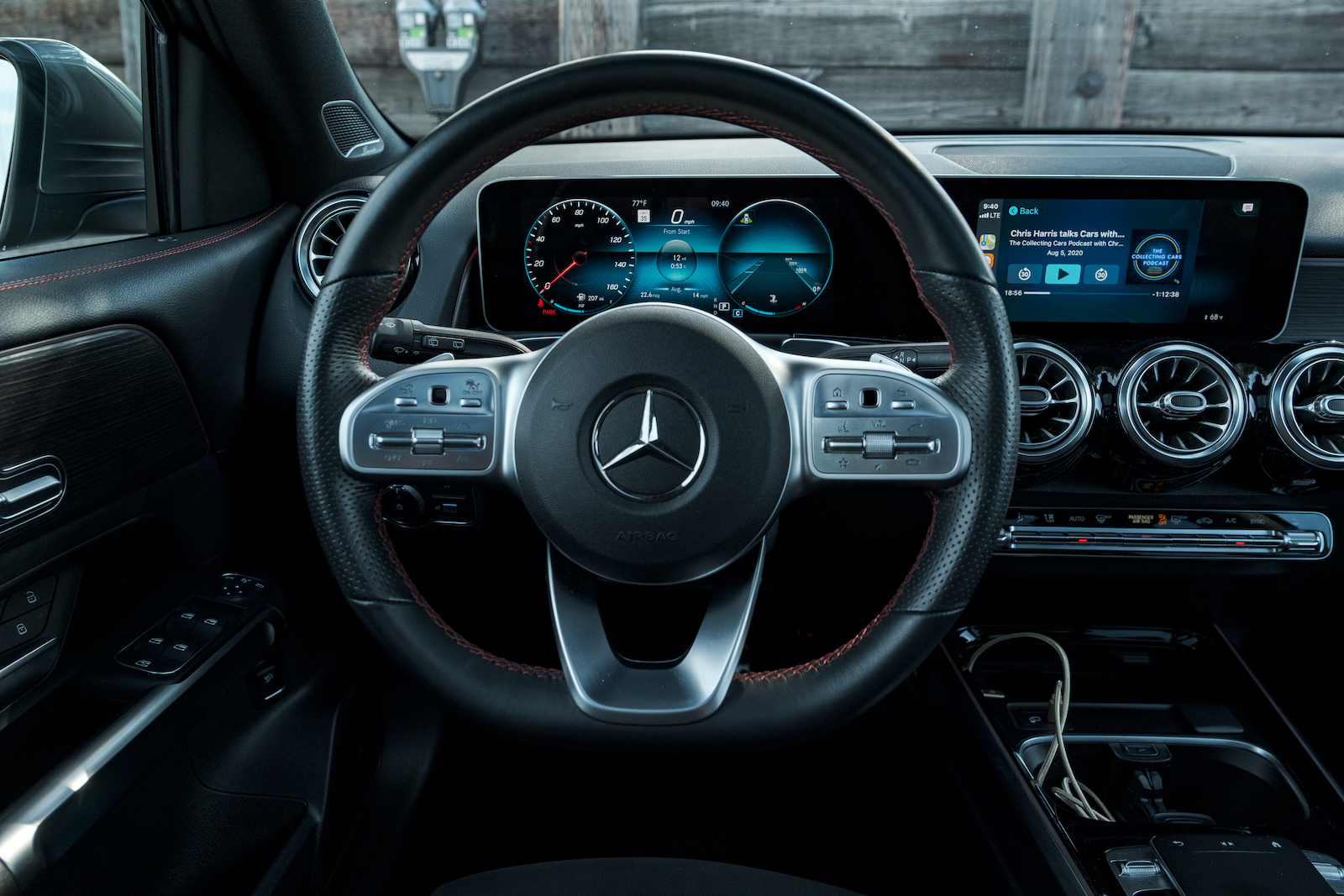 What you do notice is how much space there is between the infotainment display and the instruments because of the large piece of glass that makes up the monolithic display.

The actual infotainment screen is also a 10.25-inch affair.  This does have Apple CarPlay, though not wireless.  Small note Mercedes-Benz has moved to a USB-C plug if you want to hardwire in and use CarPlay.

The Mercedes MBUX system is very good for an OEM system.  I had no issues using MBUX rather than Apple CarPlay.  AndroidAuto is also included, however, I do not own an Android device to test how it works with that system.  It is German in design and layout in that there is menu upon menus to get to specific items, that said, it is reasonably intuitive. 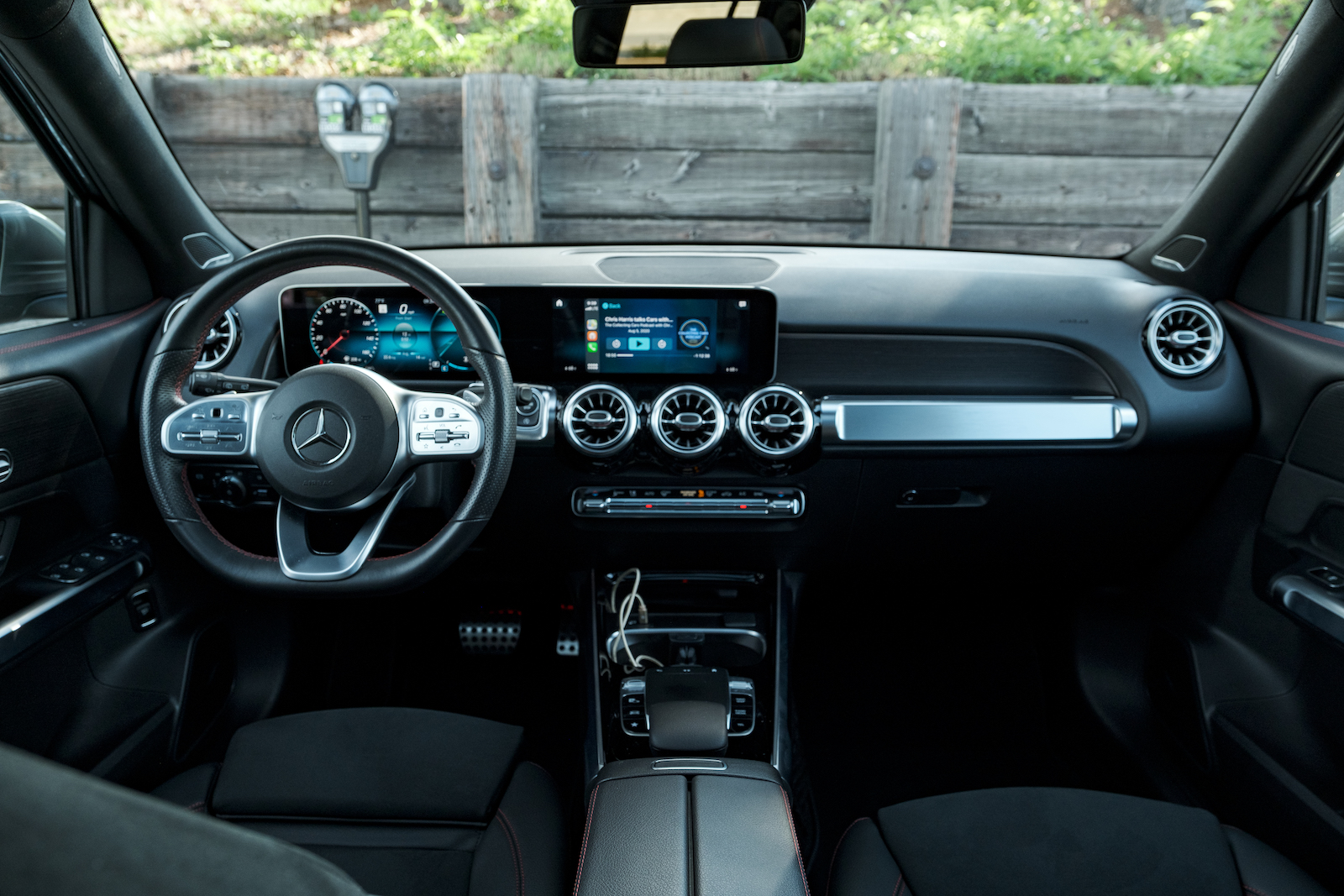 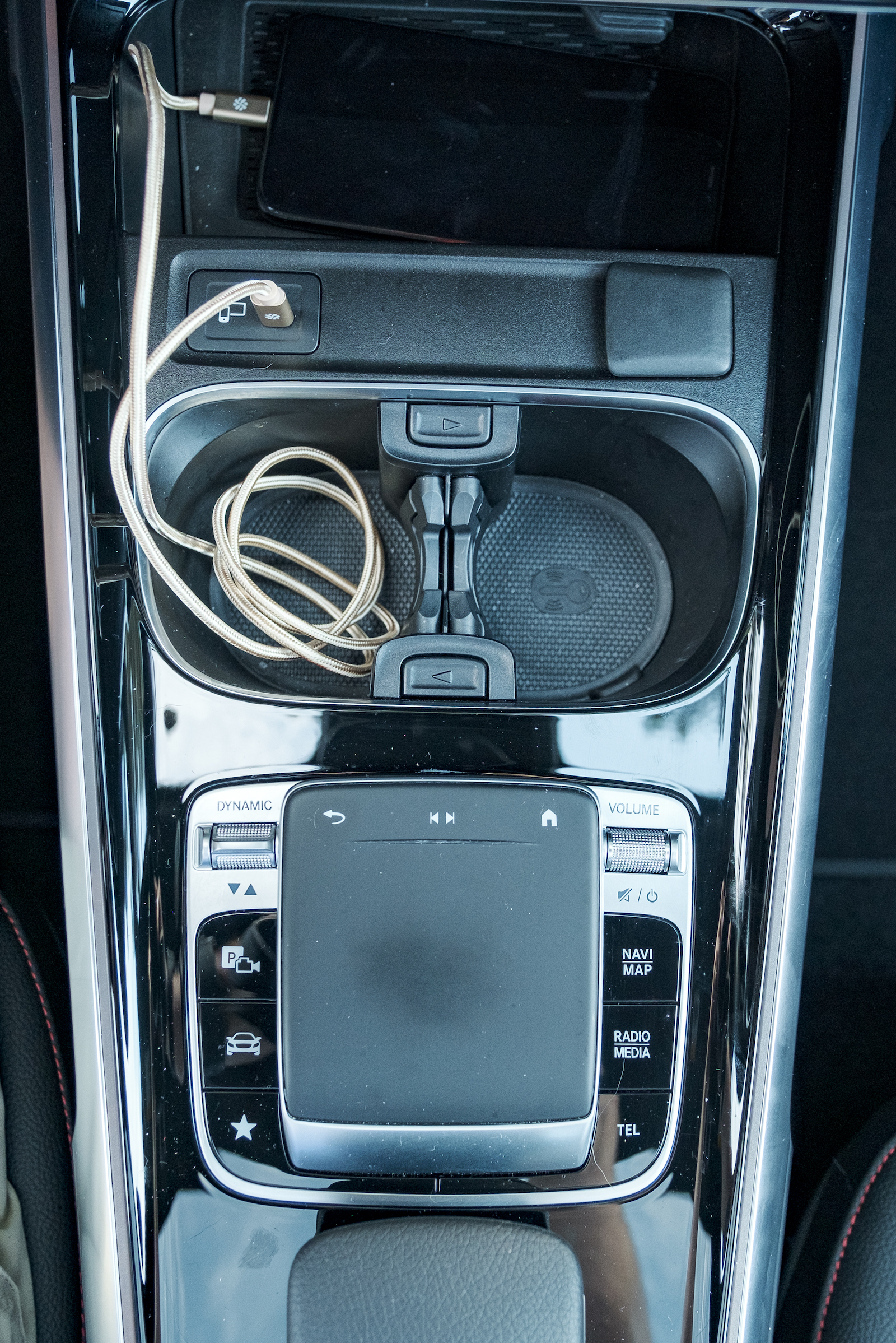 The $850 optional Burmester sound system is very good.  Only the pickiest of audiophiles (author raises hand) will find any faults with the system.  If you listen to SiriusXM, Spotify, or podcasts, anyone who would actually purchase the car will be more than happy with it.

The Mercedes-Benz GLB250 is mostly good, but it does have a few small things that make me think it snuck out of calibration about a month too soon.  I want to get this out of the way so we can move on to what it does well.

First, let’s touch on the Start/Stop system.  Do yourself a favor and turn it off.  For the one gallon of gas it will save you in the vehicle’s lifetime it is a waste.  When it turns back on it jerks the vehicle forward.  The torque converter doesn’t absorb the instant power hit, it is just translated into forward motion.  If you lift ever so gently off the brake and the engine restarts, you with feel the vehicle move forward.

When set in the standard drive mode the transmission upshifts aggressively.  It is not uncommon to find yourself in fifth gear before you cross thirty miles an hour.  Change the drive mode into Sport and the transmission holds on to gears just a little too long.  Driving in Sport in the city is good for throttle response and being closer to the correct gear but it holds on to that gear maybe five percent too long.  It is not quite smart enough. 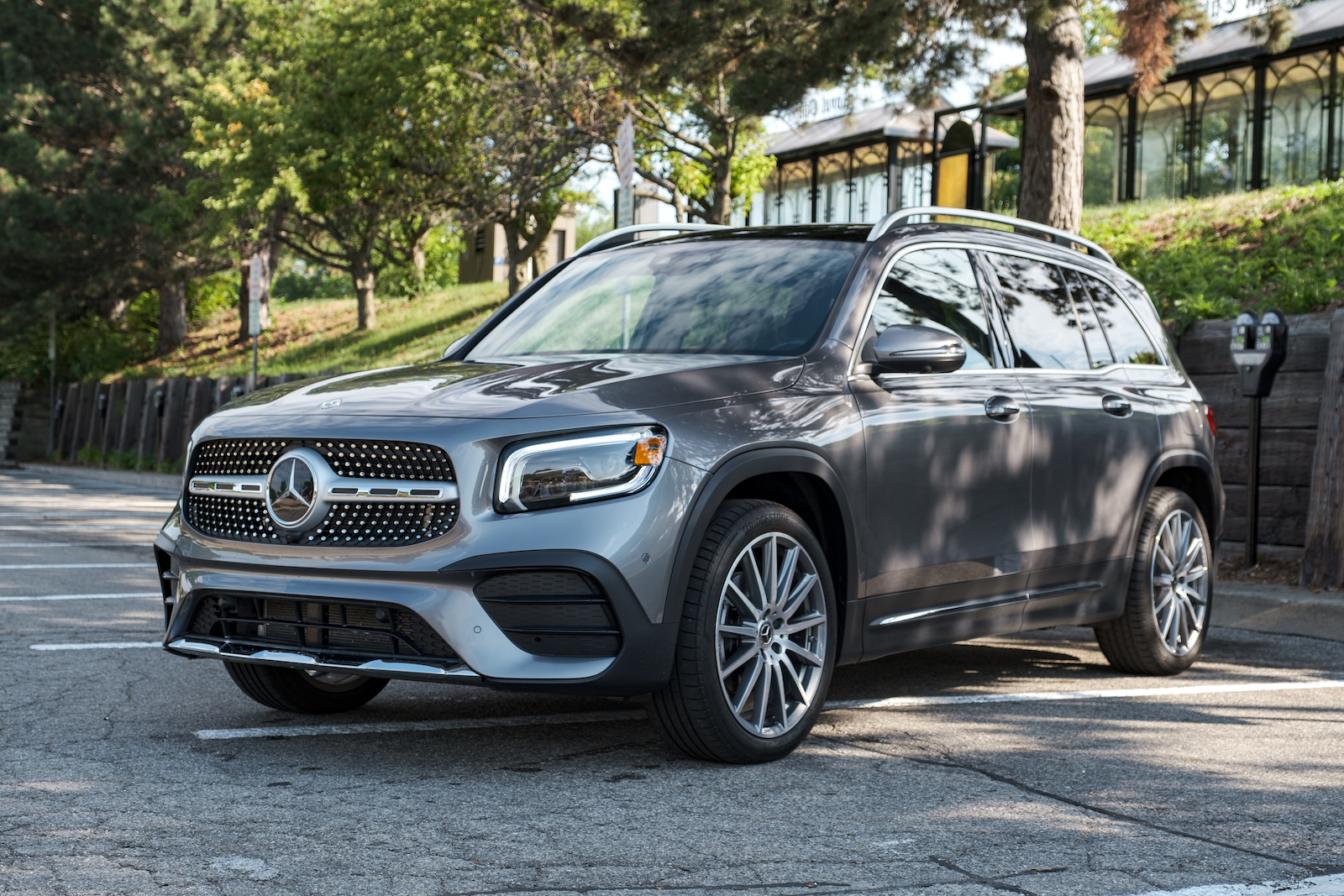 In the city or on the highway the GLB rides as a Mercedes should.  Comfortable but controlled.  It is that cliché Teutonic Tuning where everything feels solid and vault-like.

In the city, in Normal drive mode, the GLB feels somewhat hybrid like when you lift off the throttle. It will seamlessly glide as if the transmission has been decoupled from the engine.  It is a small measure that adds to the overall feel of refinement.

On the highway, the Mercedes GLB is dead silent at 90 miles an hour.  This is a vehicle that will eat up miles with no issue.  I can easily see doing a 12-14 hour day behind the wheel and emerging relaxed rather than fatigued.

The active LED headlights on the GLB did a nice job of lighting up a very dark two-lane road.  The lights move slightly with the steering wheel so that there are no surprises around the corner like the random deer standing in the road.

This Mercedes-Benz GLB250 4Matic comes with a 2.0-liter turbo four-cylinder.  It delivers 221 horsepower and 258 lb/ft of torque through an 8-speed dual-clutch transmission.  I never felt like needed more power.  Acceleration was swift and only fell off as you approached the redline.  This had more than enough power for comfortably merging on to highways or passing a string of cars on a two-lane road.

The Mercedes GLB250 isn’t a vehicle that has to try and feel sophisticated or premium.  Because of its pedigree, it’s just that way from construction.  Where a Lexus NX or Acura RDX looks like they are trying to be premium, it just comes off as natural with the GLB.

That I think is the magic of crossovers and SUVs I tend to like.  They don’t try, they just are, it’s natural for them to be as they are.

The GLB is also good value for money.  My test vehicle came fairly loaded.  The base price is $38,600 with the as-tested price coming in at $55,340.  You could save $2,240 by skipping the AMG trim package, and I might skip the $2,250 Driver Assistance Package as there were far too many alerts for seemingly no reason for my tastes.  Compared to what you pay for a BMW X3 or even a Lexus NX these days, I would not blink at the sticker price.

As I said at the beginning this is usually a class of vehicles I don’t really care about.  The Mercedes GLB 250 stood out enough for me to take notice and not only care about it but actually enjoy my time with it.  If you said I had to drive a midsize crossover, this is the one I would choose immediately.  It is nicely sized on the outside and very large inside.  The materials and interior design are the best in class.  It is very comfortable to drive on the highway and handles the road craters around Metro Detroit with ease.

If you are in the market for a vehicle in this category, don’t drive this one first, it will ruin your other test drives. 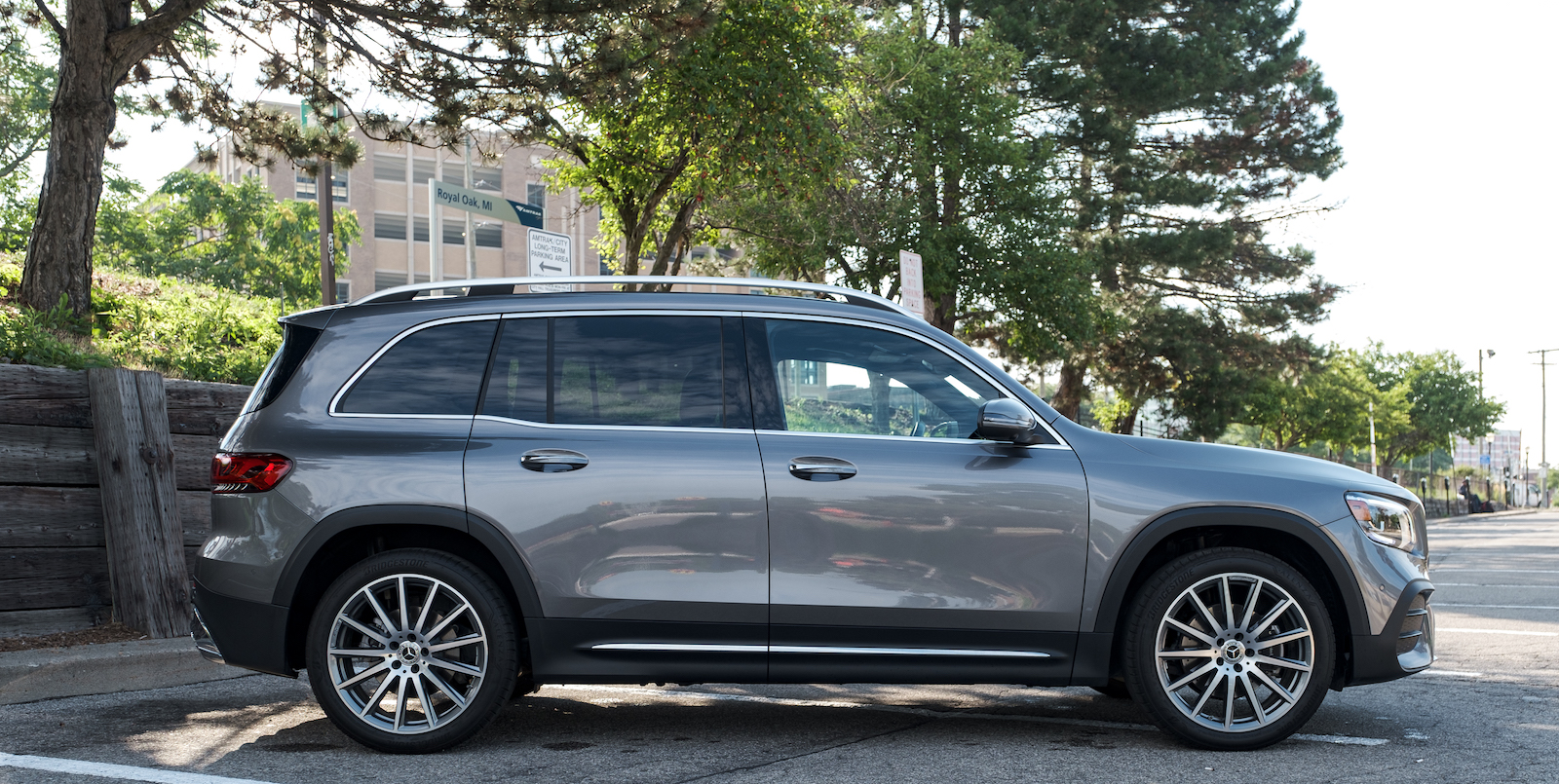