The Tacoma TRD Pro: OK, I get it | Review

The first Tacoma review I ever produced as a journalist-type was easily the most hated thing I’ve ever put on YouTube. I completely underestimated the Tacoma’s following, some of my favorite quotes included “What a stupid review. To the point of being childish…..” and “This guy is a total idiot! He clearly  doesn’t understand why we get Tacoma.” However, it was a very honest review. I just didn’t like it, and yes I compared it to an F-150. I just couldn’t fully comprehend why people “get Tacoma”.

Since then, I have tested most variations and trim levels of the latest generation Tacoma, and for the most part, my opinion remained unchanged. However, the stars recently aligned and I got an Army Green 2020 Tacoma TRD Pro loaner the same week that the Trail Trek Tour was going off-roading. Let’s see if that helped me “get Tacoma”. 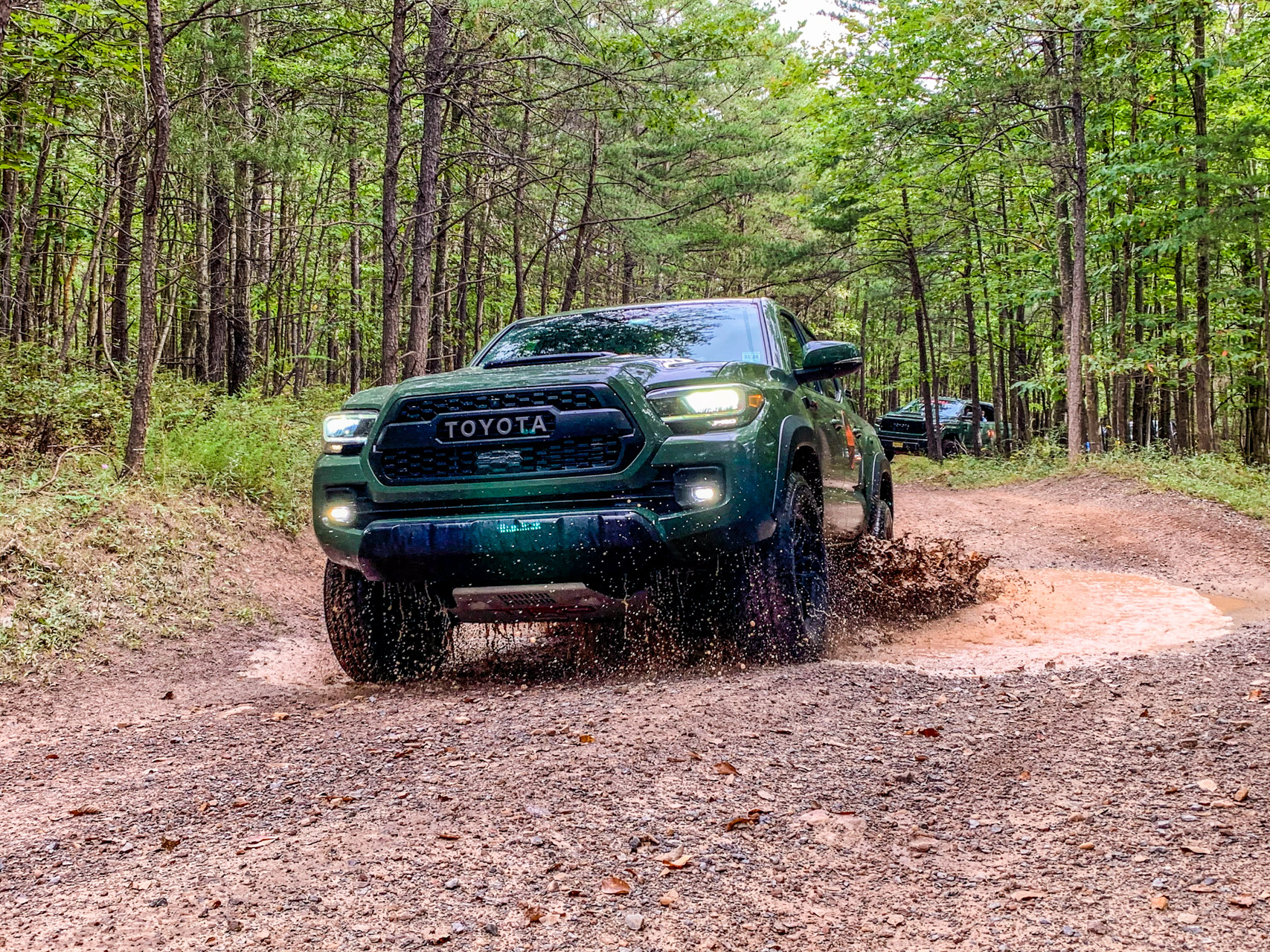 The “Taco”, as the kids call it, has been around since 1995 as a replacement to the indestructible Toyota Hilux, also known as the “Toyota Pickup” here in the U.S. My dad had one when I was a kid, that thing was great. I have my first donuts-in-the-snow memory sitting in the front of that truck. Obviously Toyota trucks are legendary for reliability, and for staving off multiple assassination attempts by Top Gear UK. The Tacoma’s first generation lasted from 1995 through 2004 and was designed by American Kevin Hunter, who also returned to design the 3rd gen (2016 to present) Tacoma. In between, the second gen truck lasted a full decade (2005-2015).

Toyota has a habit of letting their trucks and big SUVs languish for the better part of a decade before updating them, but at least the Taco got some updates for the 2020 model year. That included a refreshed exterior as well as Apple CarPlay, Android Auto and Amazon Alexa integration, plus some trim adjustments here and there. But we’re here for the TRD Pro, which sits clearly at the top of the Tacoma lineup.

It ain’t cheap, as you can see the TTP starts at $44,075. That’s an impressive $17,925 more than the base SR, or basically – a Yaris Hatchback more. Here are the highlights of what you get for that scratch. 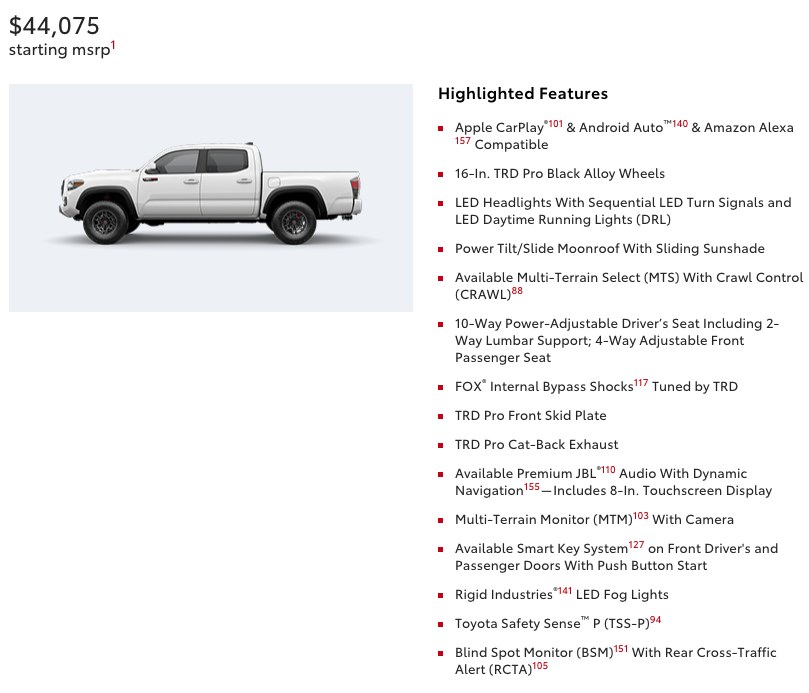 Clearly you buy the TRD Pro for it’s off-road prowess. We already brought you the always-entertaining RCR Review of the TRD Pro, let’s see how this thing does in the mud. 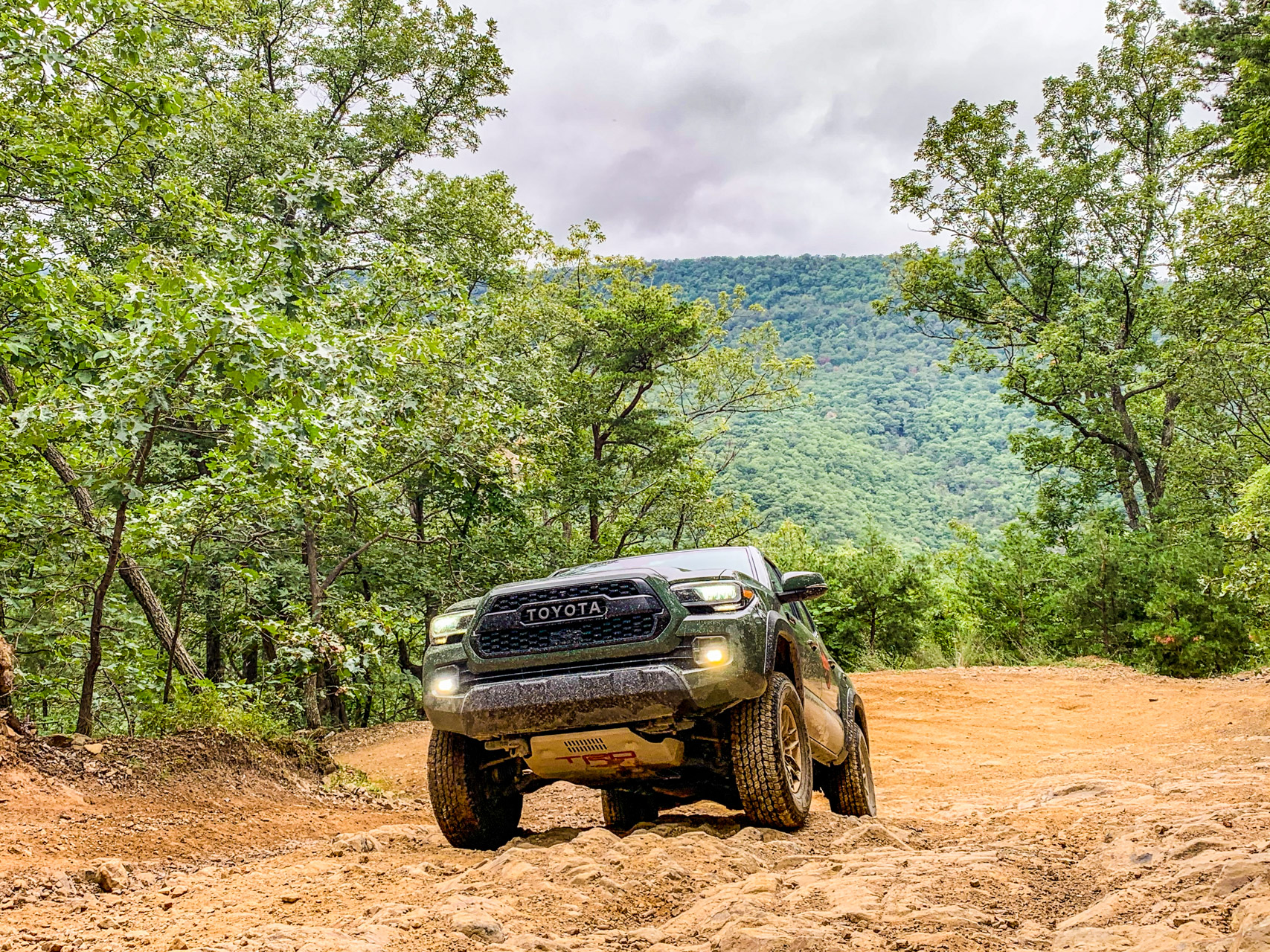 I’ve gone off on some adventures with Phil and the good folks at Trail Trek Tour before. With that outfit I’ve tested some crossovers off-road, and Kamil and I went camping. Not together. Well, sort of together. I was big spoon. Anyway, when they invited me on a journalist family fun trail drive at George Washington National Forest I was in. I was planning to take my 2017 JKU Jeep Wrangler, but the nice folks at Toyota offered me the TRD Pro. Couldn’t say no to that, always easier to send it when it’s not yours! 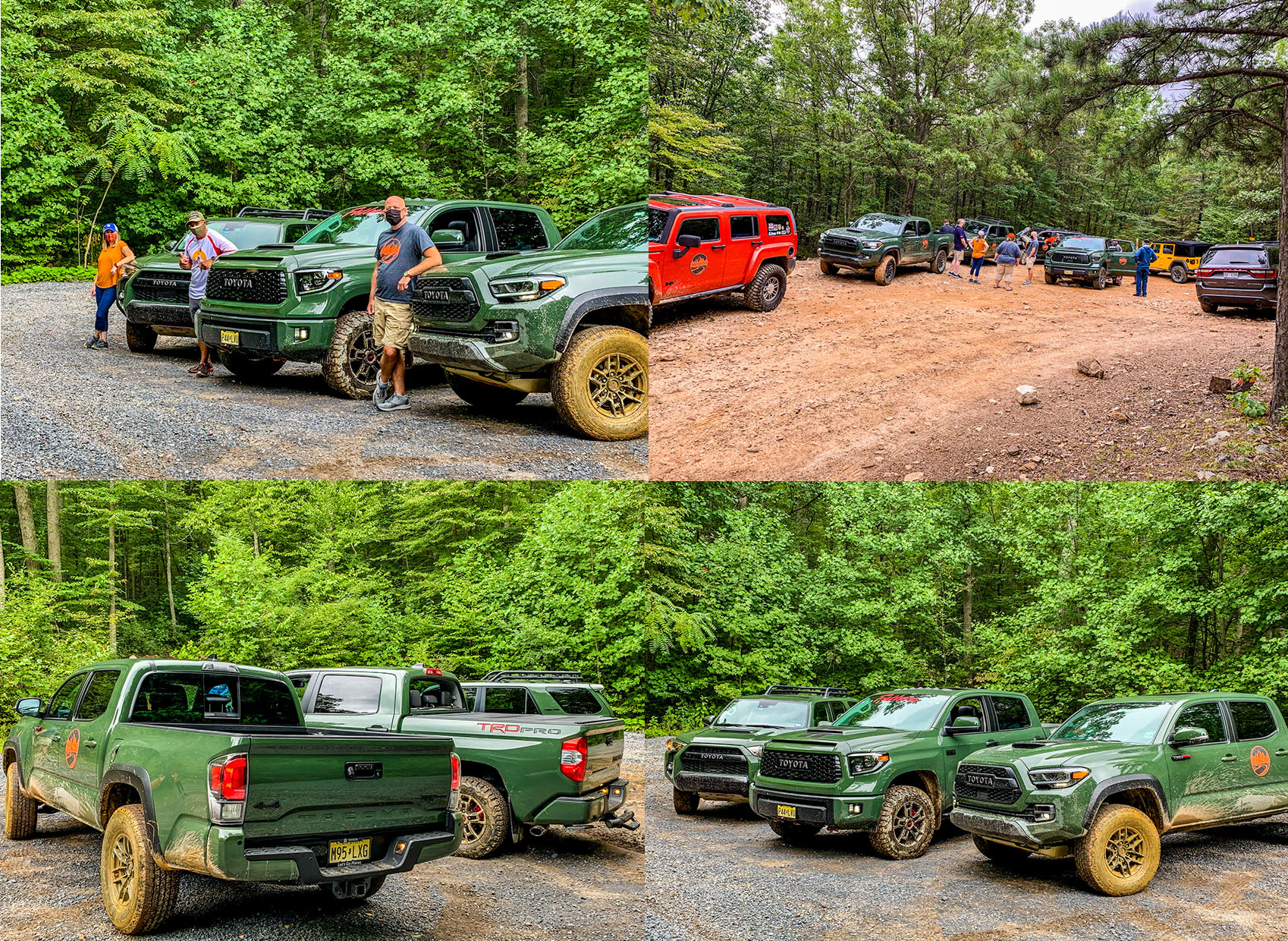 Out on the trail, the Tacoma would literally go through anything. The large mud bog in the two-pic series above had a pretty good drop on the front side, most people went around it to the right, I obviously went right through. Which was the case with most of the mud I could find throughout the two trail drives of the day. The mud slog below was the most photogenic, my wife, acting as the photographer for the day, got a little dirty on this shoot. Got some cool comments from the Toyota twitter account on these. 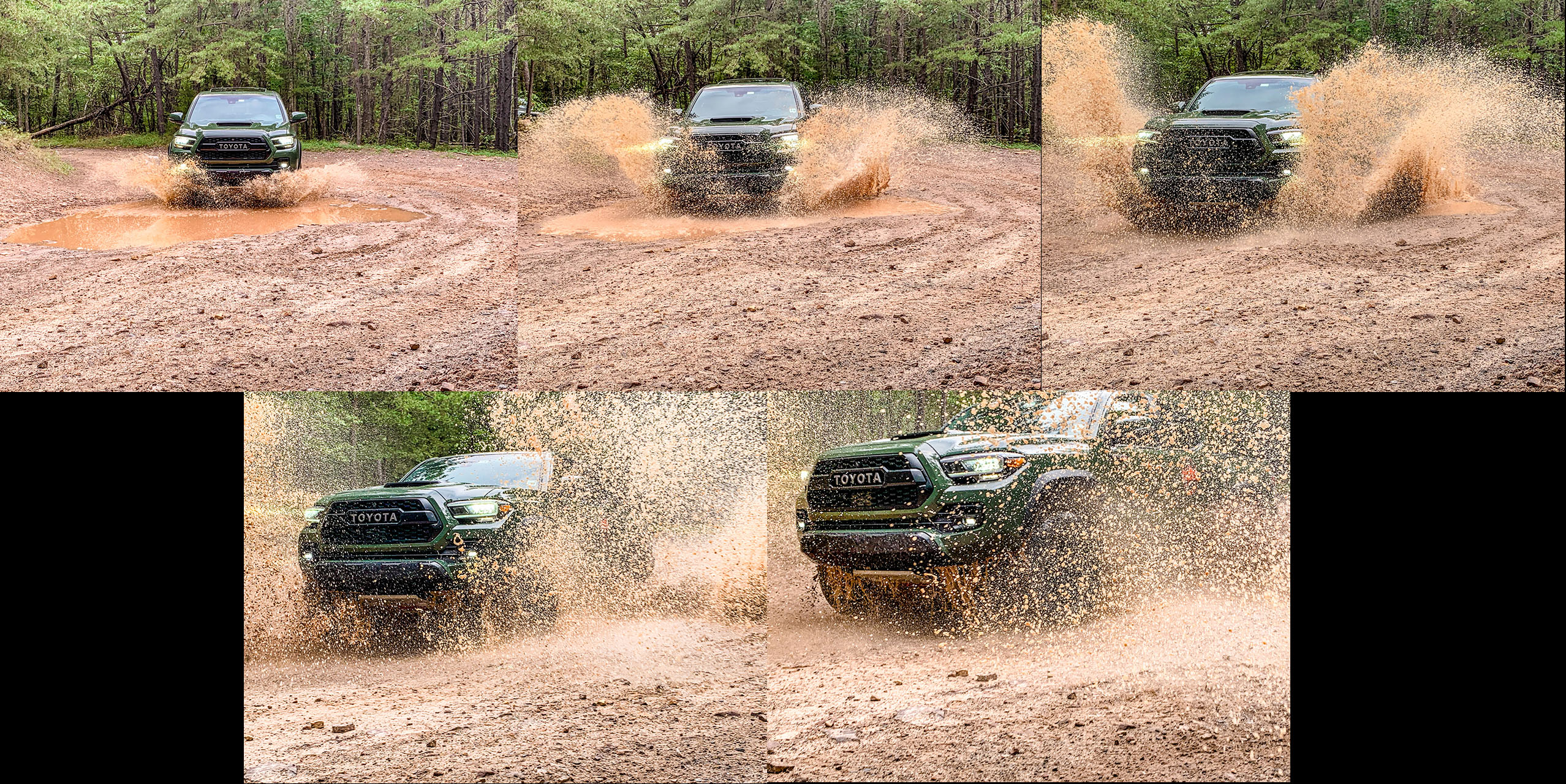 My biggest criticism of the Taco while off-road was the bulbous hood. It made tricky terrain trickier because it was impossible to see over. Thankfully, and unlike the other TRD Pro’s out there, it had a trail camera (top right below). While the resolution wasn’t amazing (look at those pixels!) it did the job. 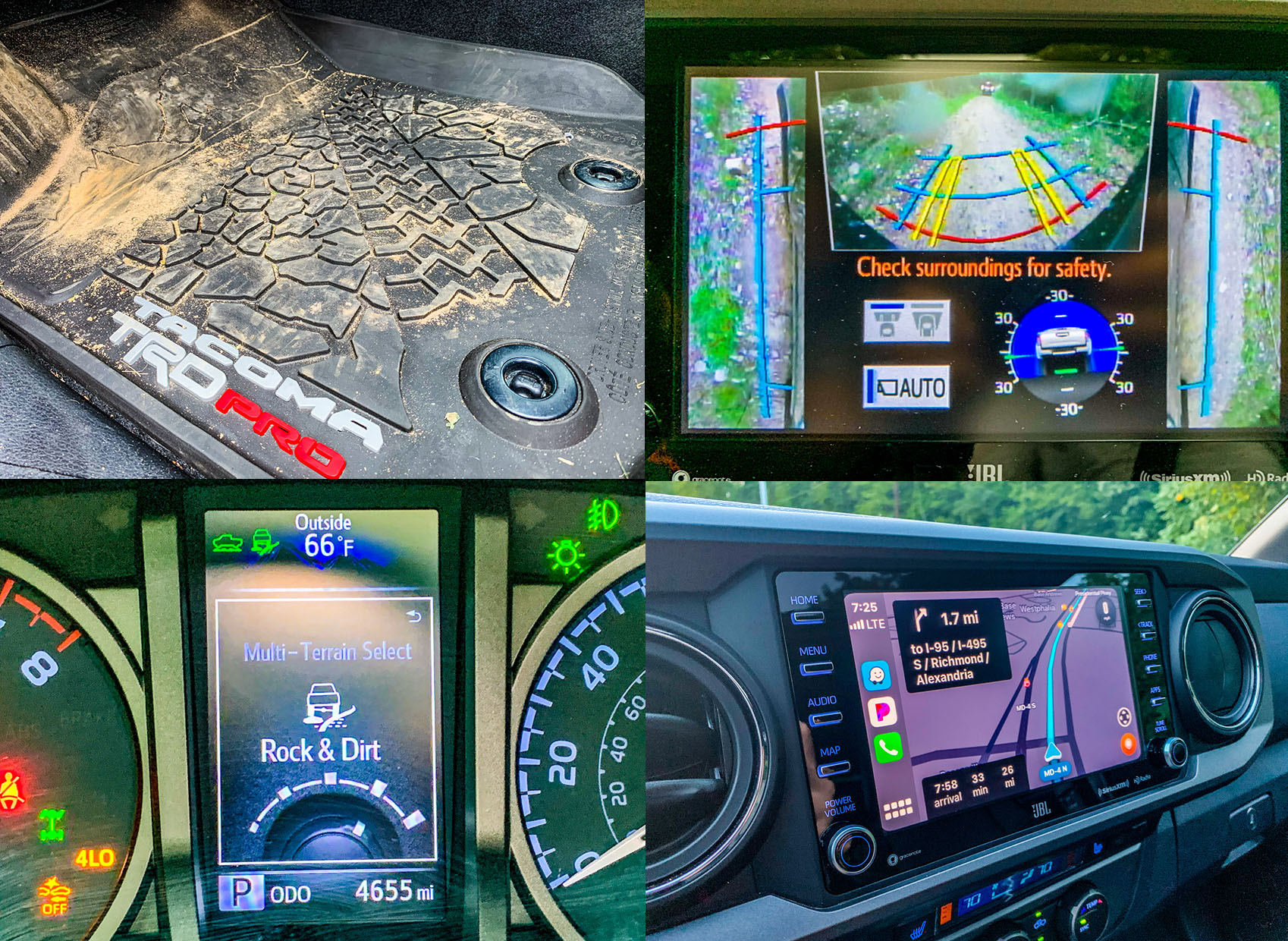 Also, the grab handle on the passenger side wasn’t great. Along the rocks, my picky passenger noted that she had a hard time holding on. I didn’t get a good picture of it, so I’ll use Toyota’s. See it up there in the top right? A grab bar across the area above the glove box, ala Wrangler, would be preferred. But the off-roading grips are minimal, this thing was a blast to drive across rocks and mud. 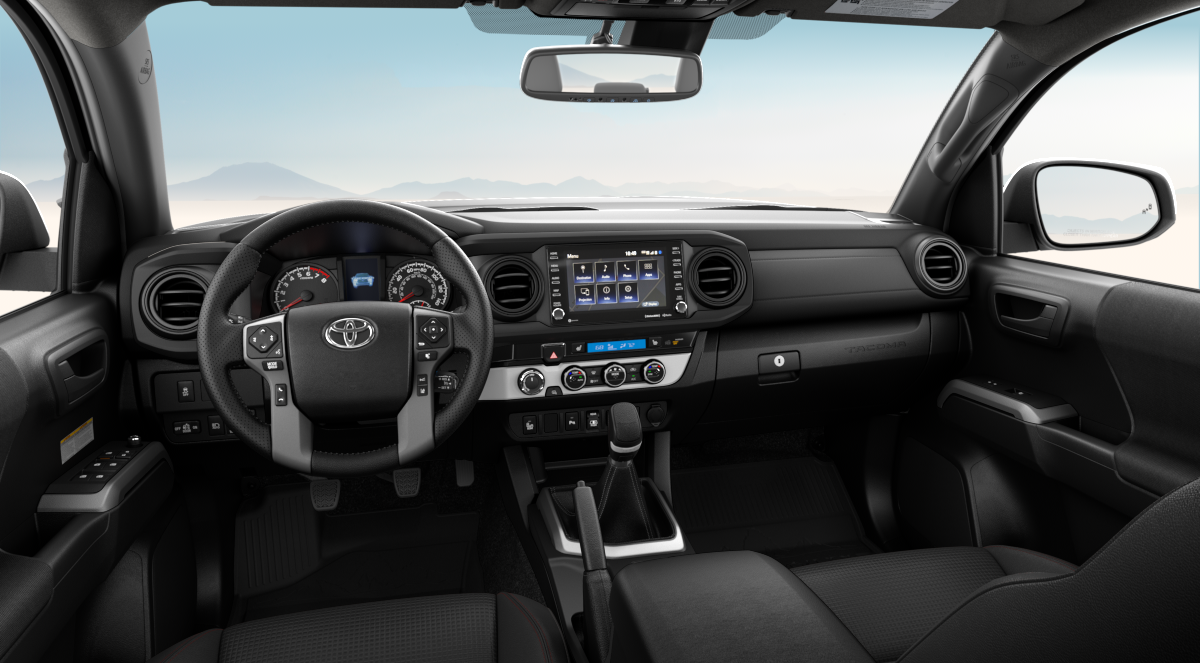 Here are some other shots out on the trail. 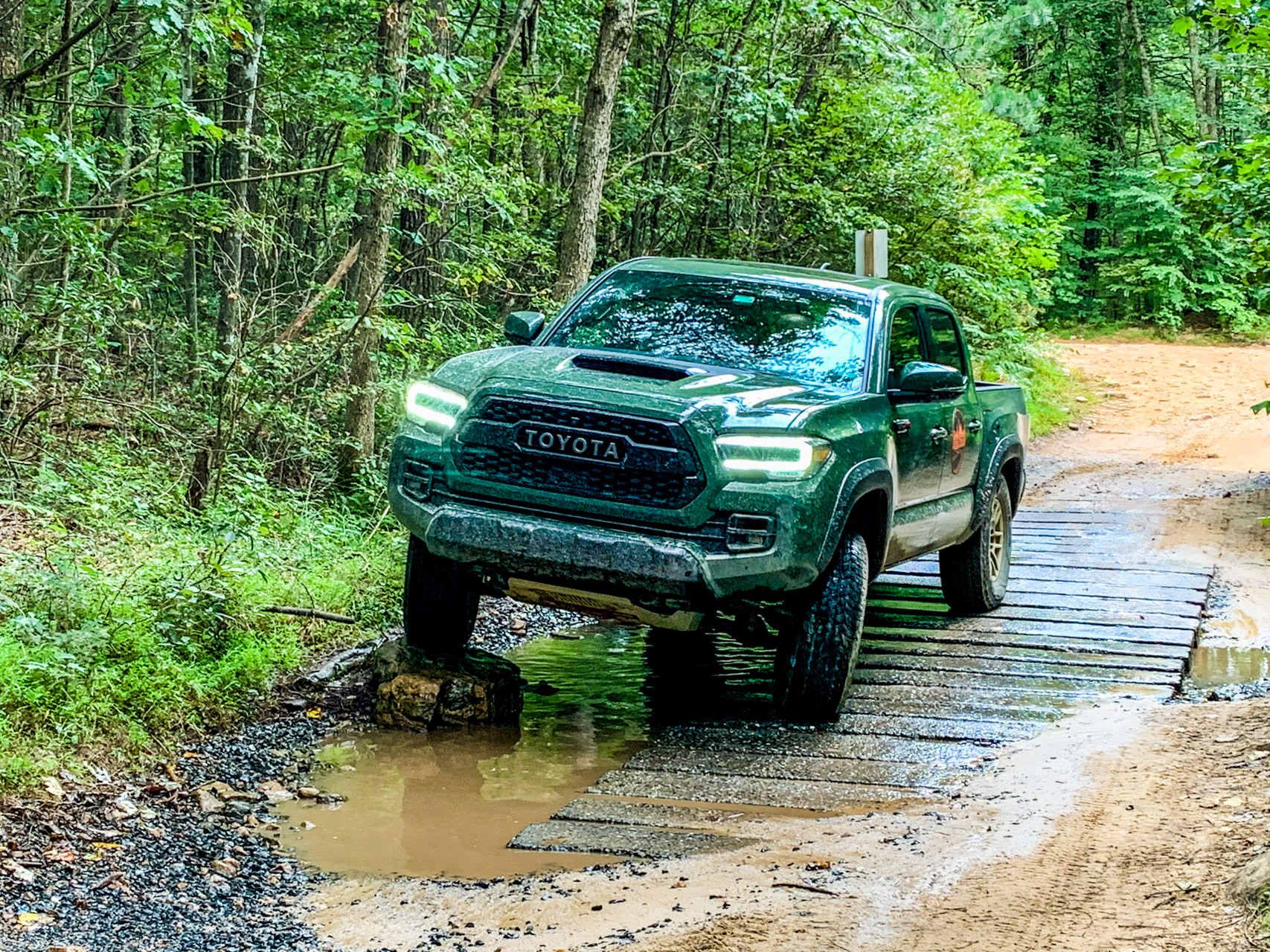 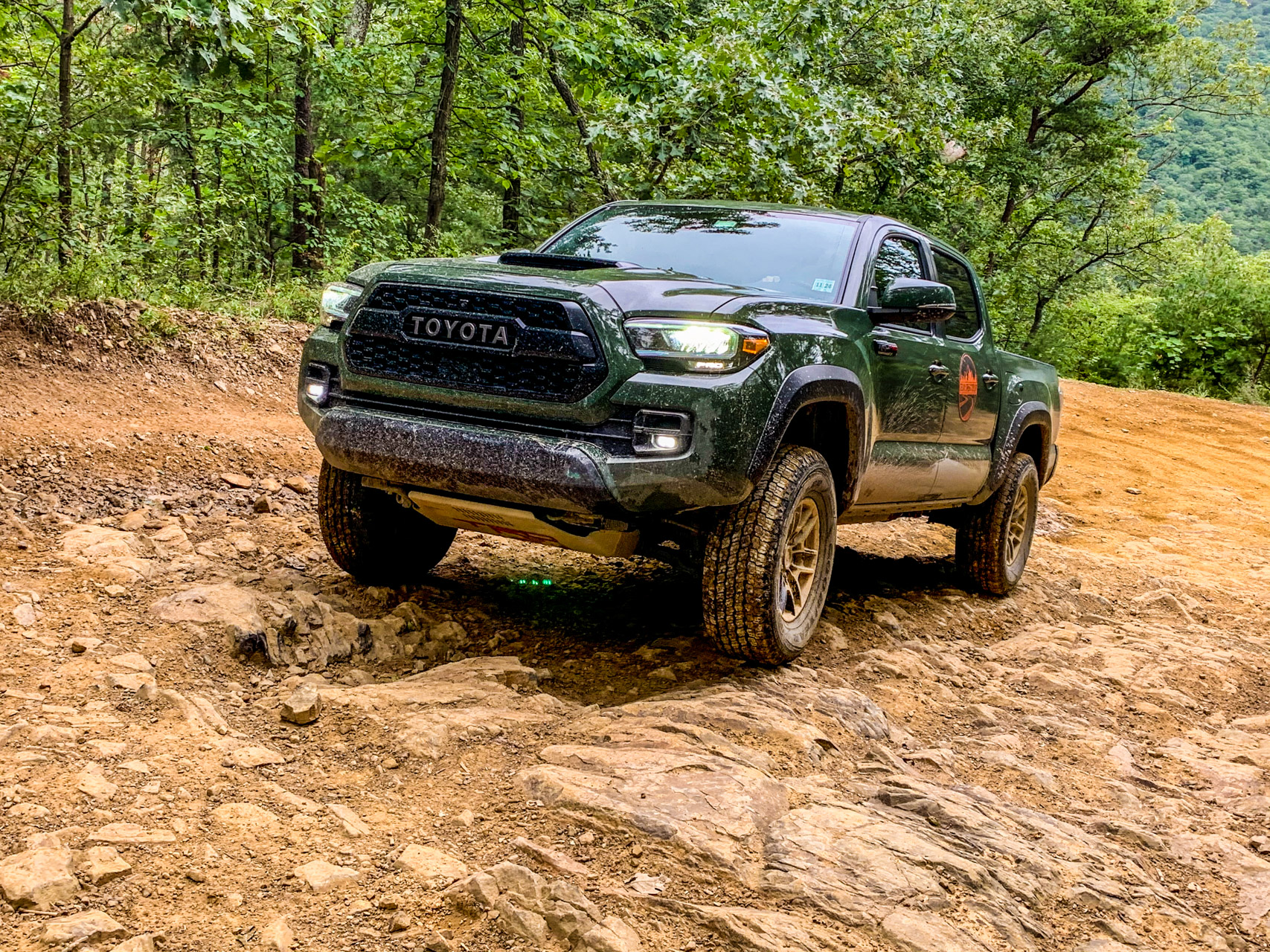 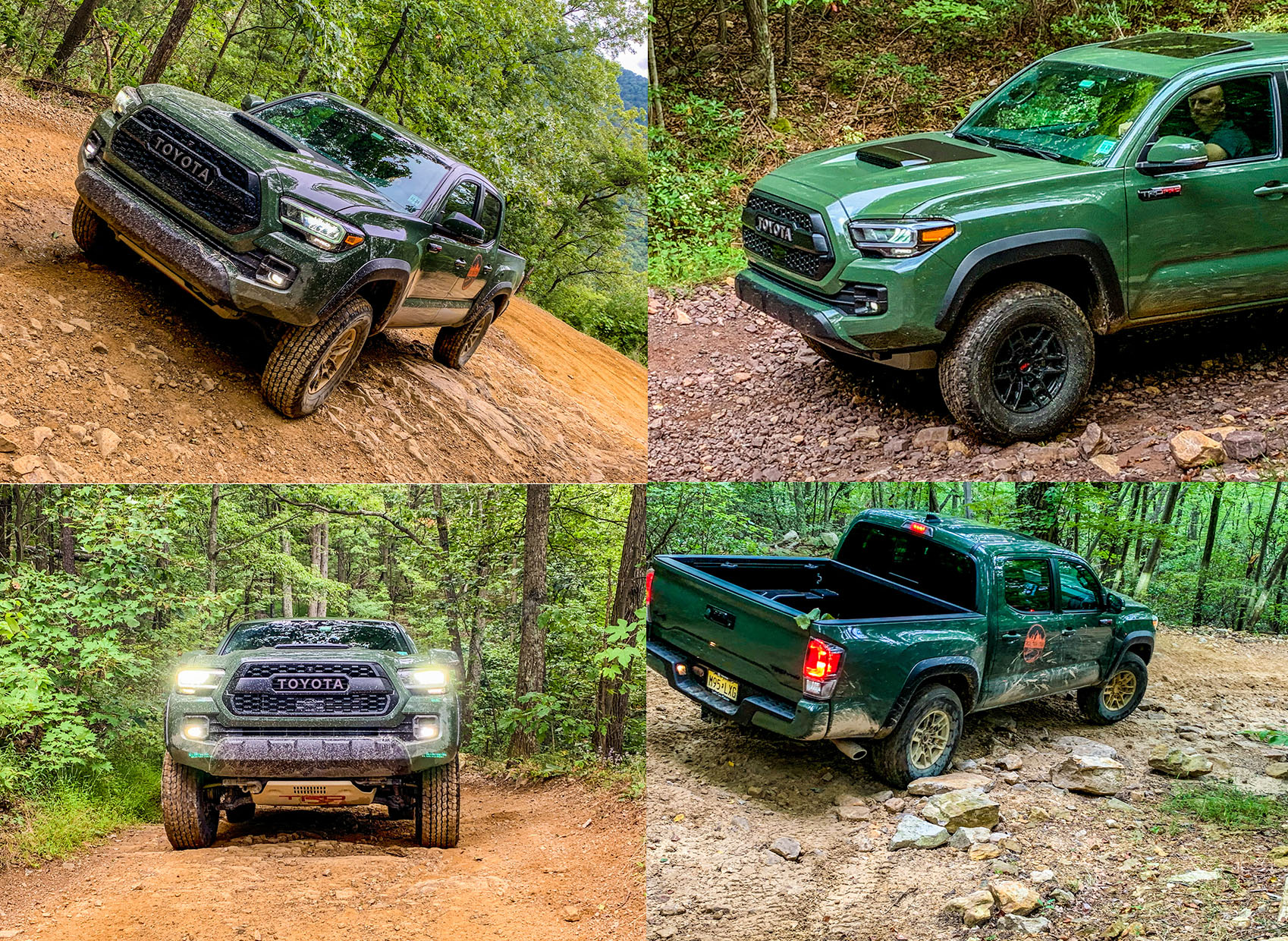 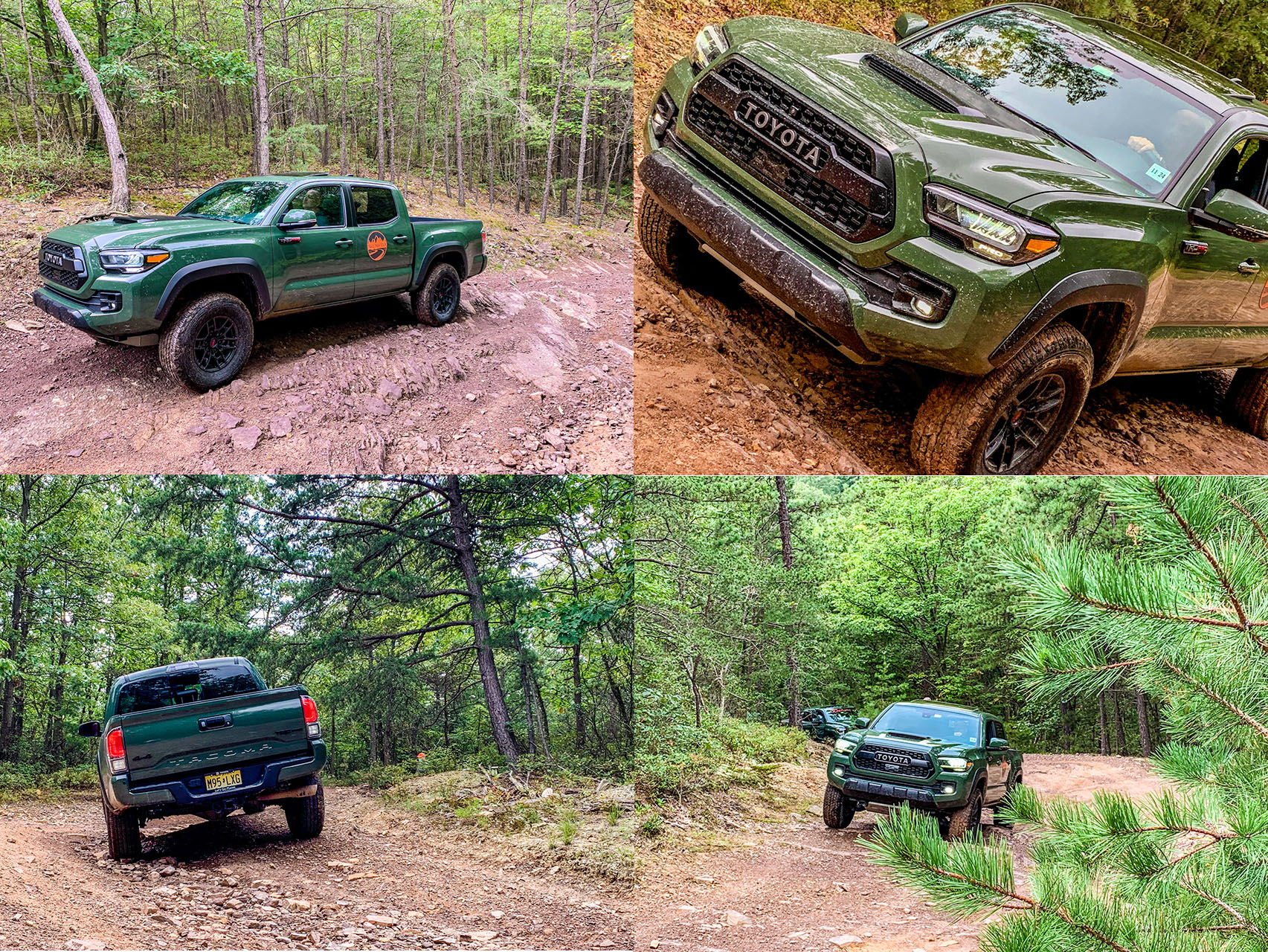 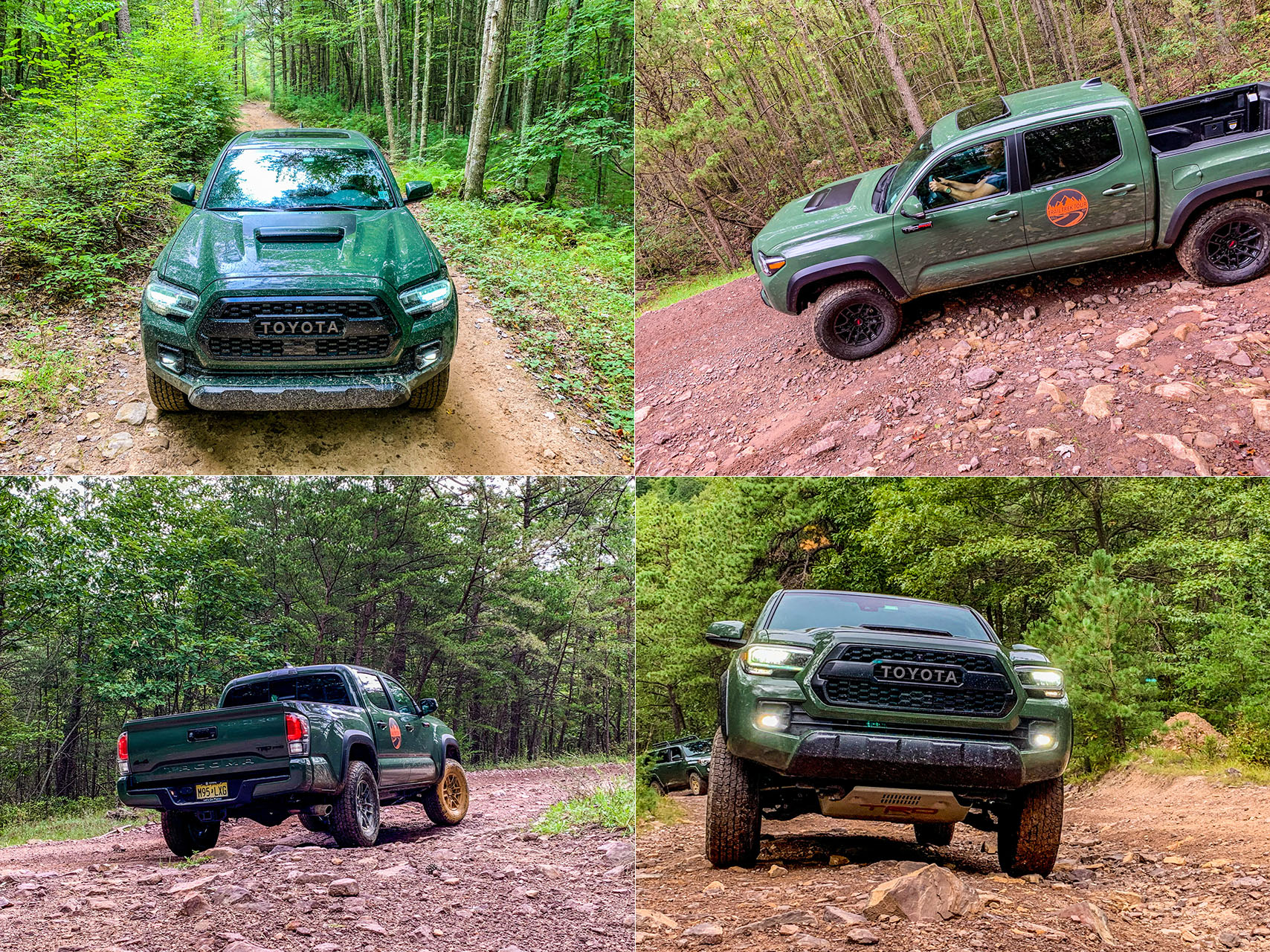 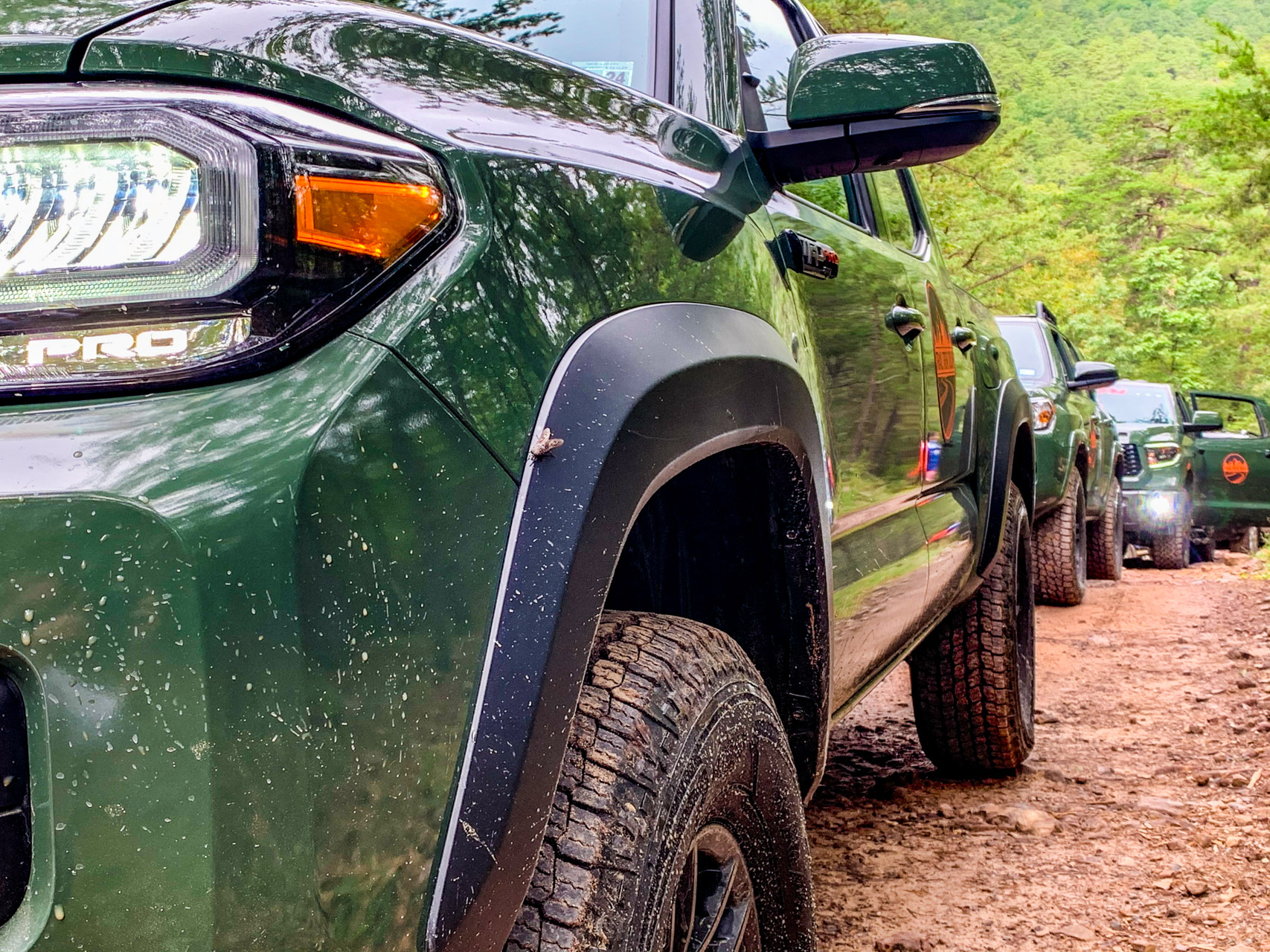 So yeah, I dig the Tacoma now, at least in TRD Pro guise. Would a regular Tacoma have also been fun out on that trail? Probably.

Would off-roading any off-roader help you like it? Maybe. But in case you’re thinking that this hard-hitting journalism piece could be summed up with “local journalist finally enjoys off-roader after driving it off-road” it’s not quite that simple. What the Tacoma does while its off-road is help you forget its faults. It’s the same reason I spent my own money to daily drive a Jeep Wrangler. It’s far from perfect, but all you need are occasional muddy reminders why you bought it in order to forget some of the bad stuff. 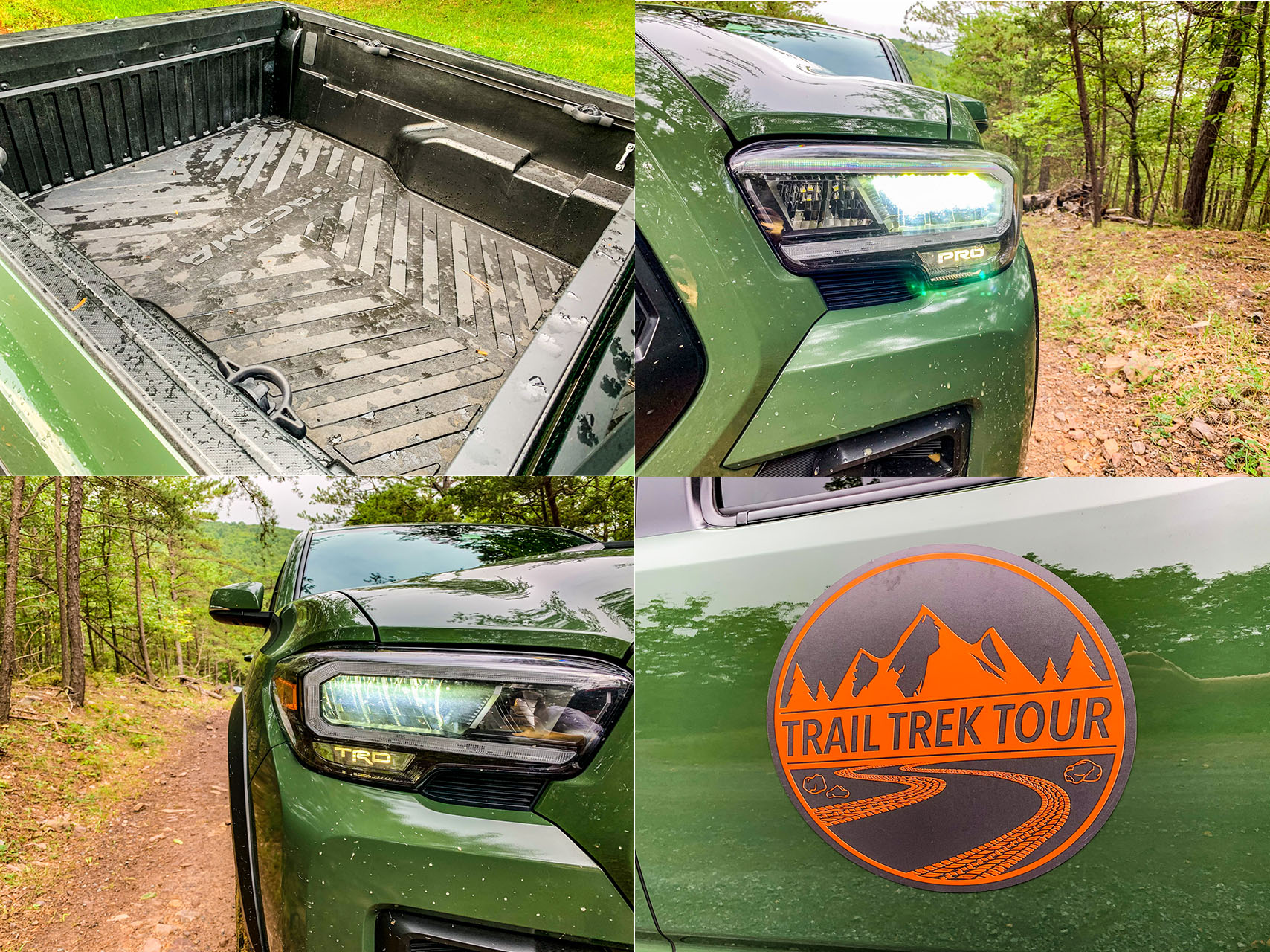 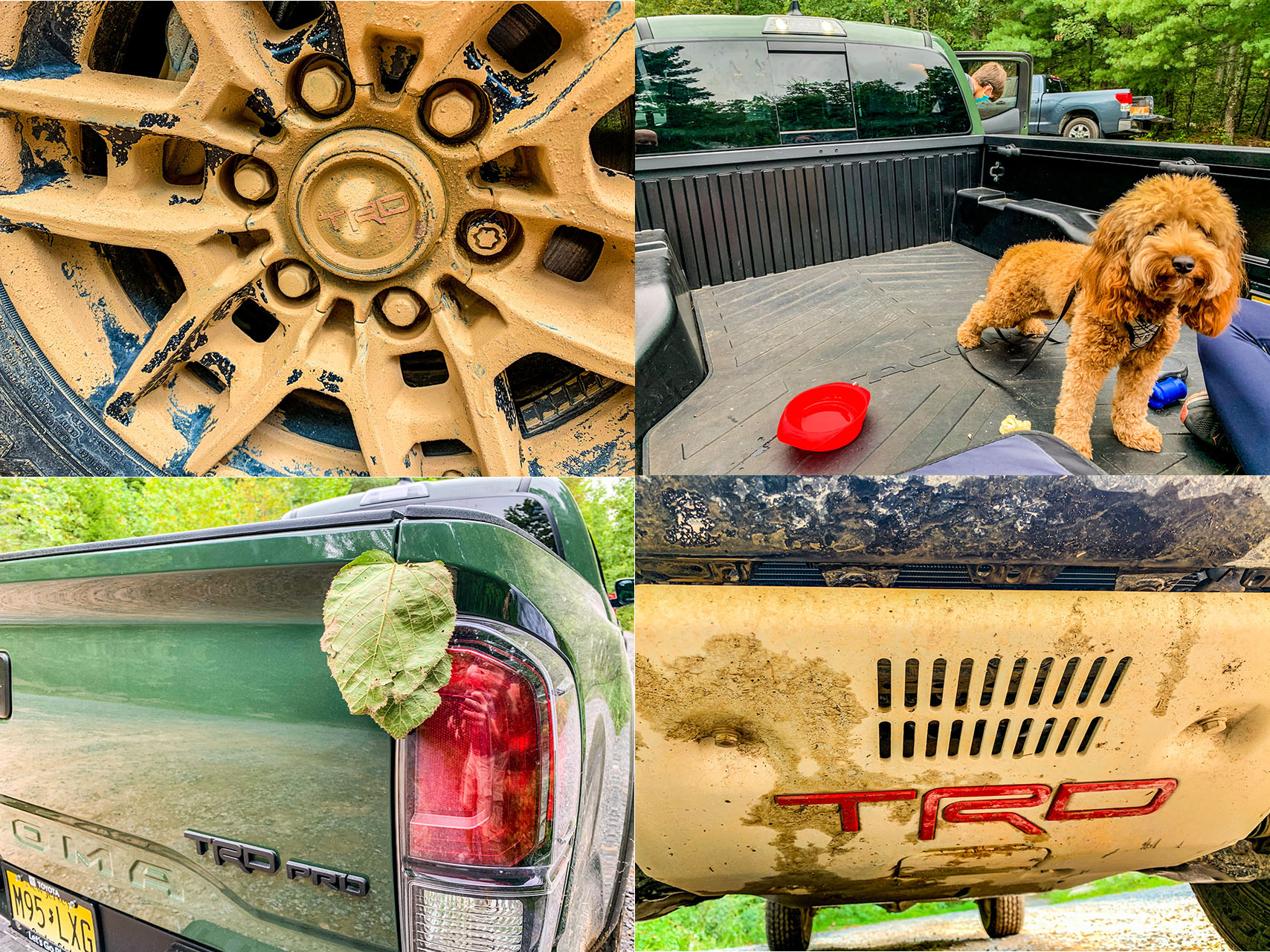 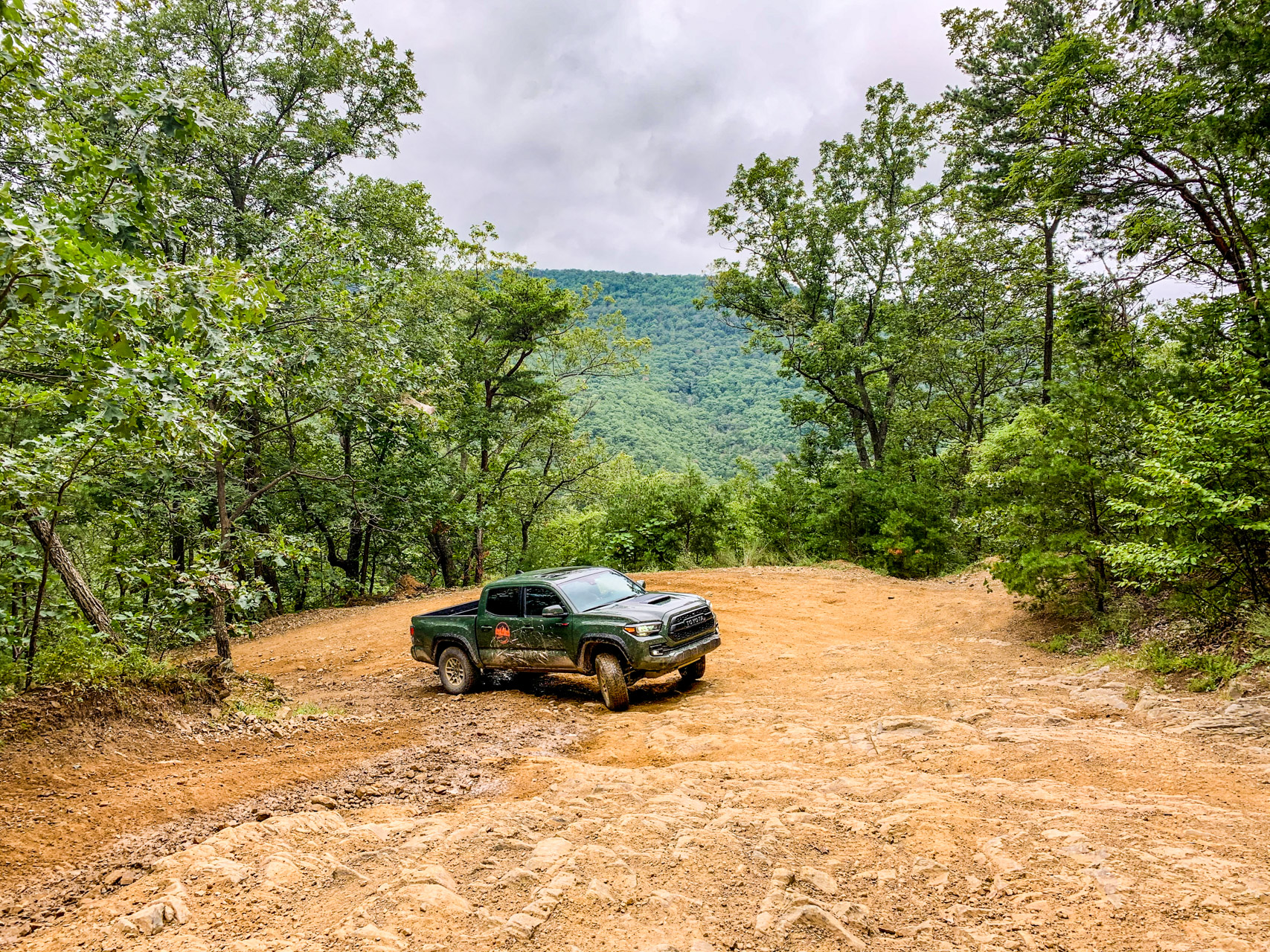 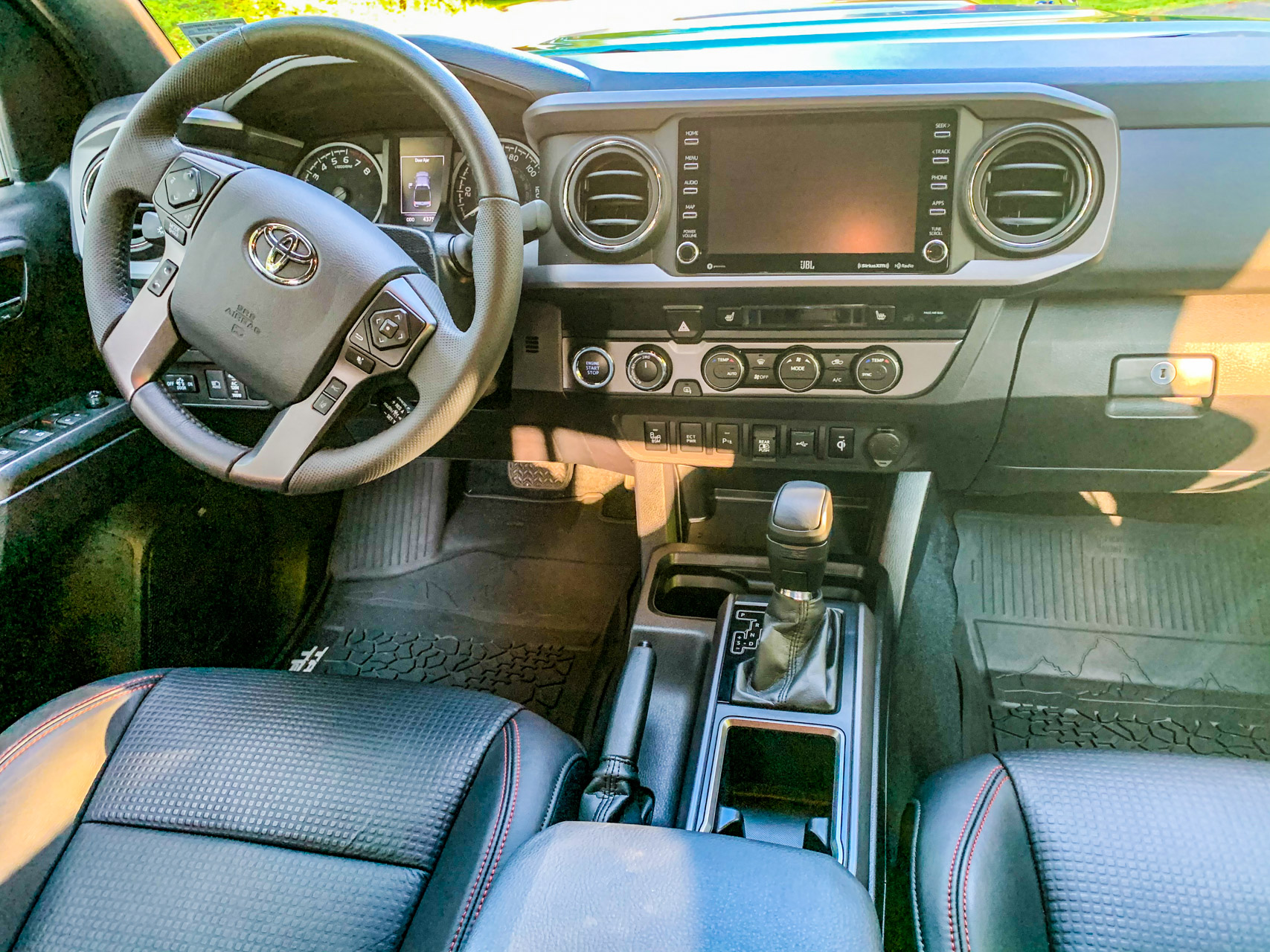 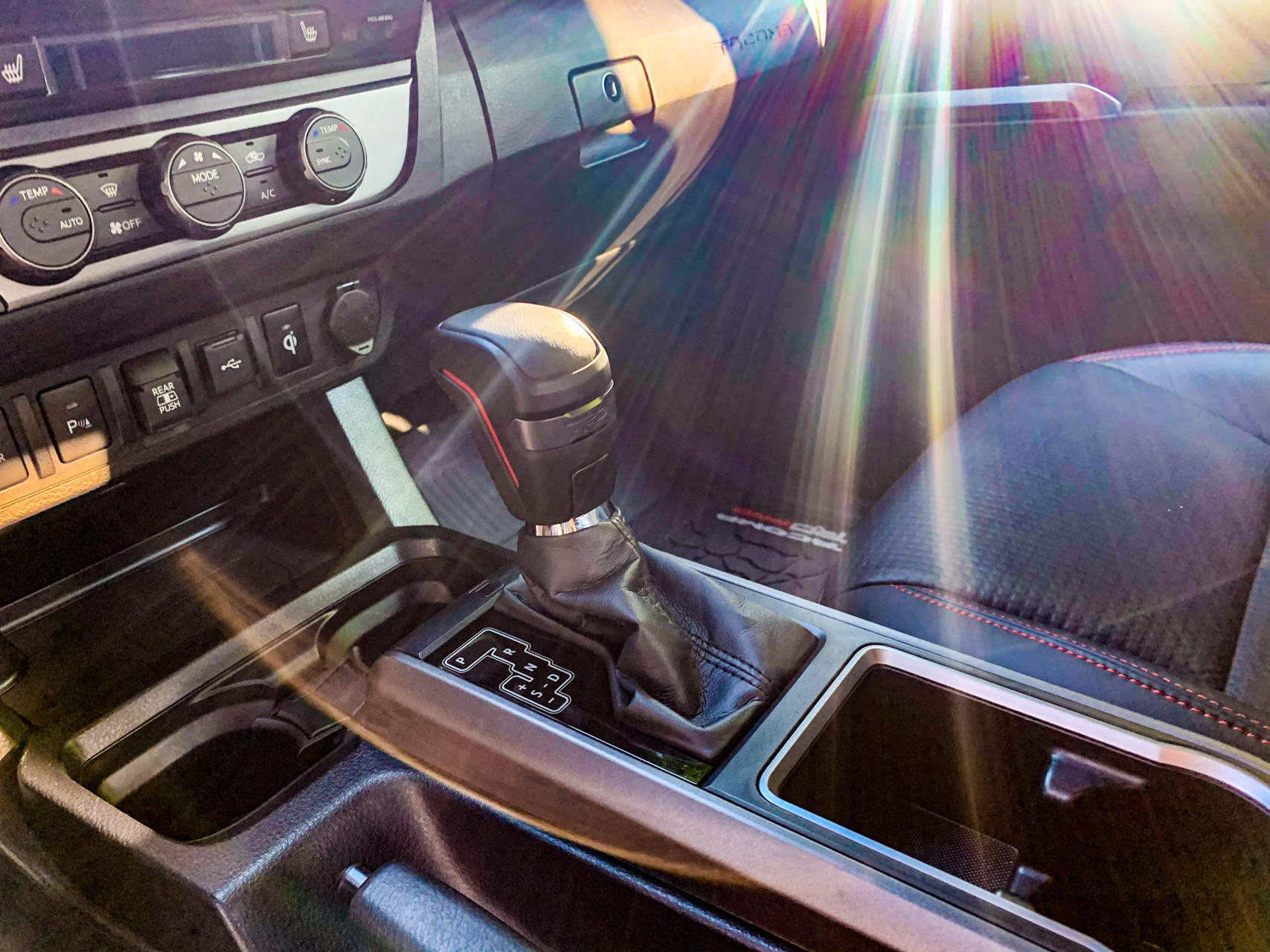 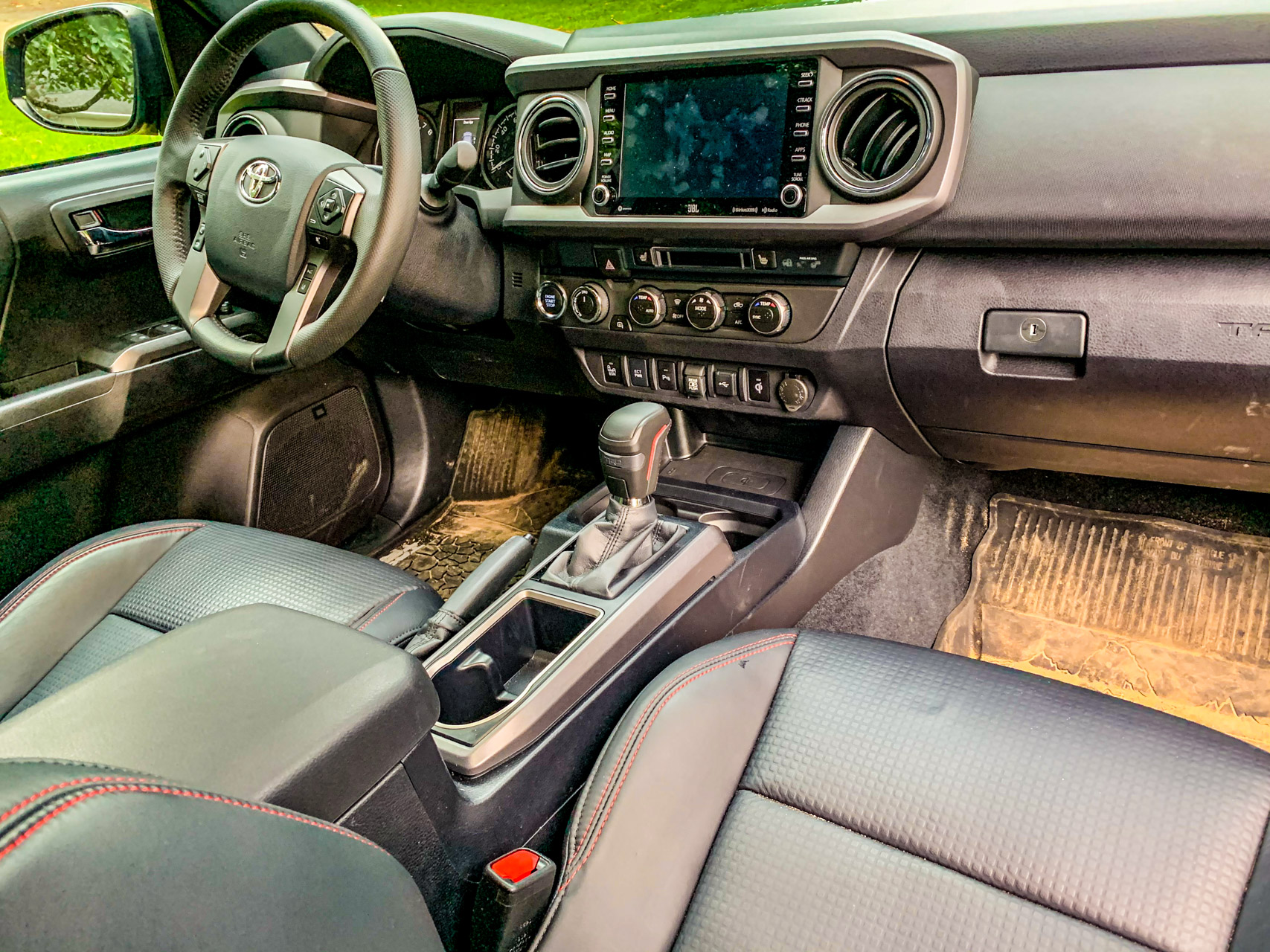 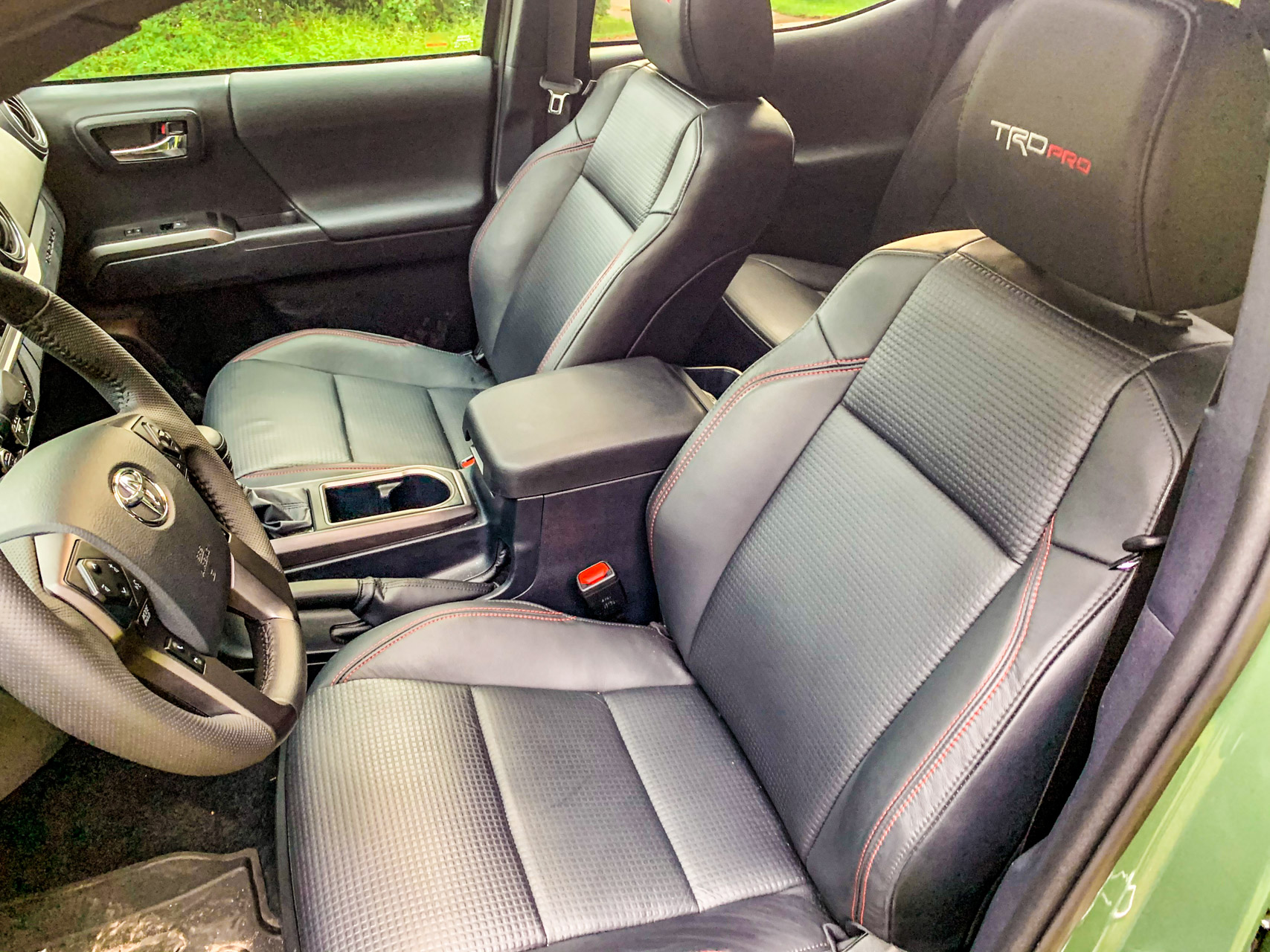 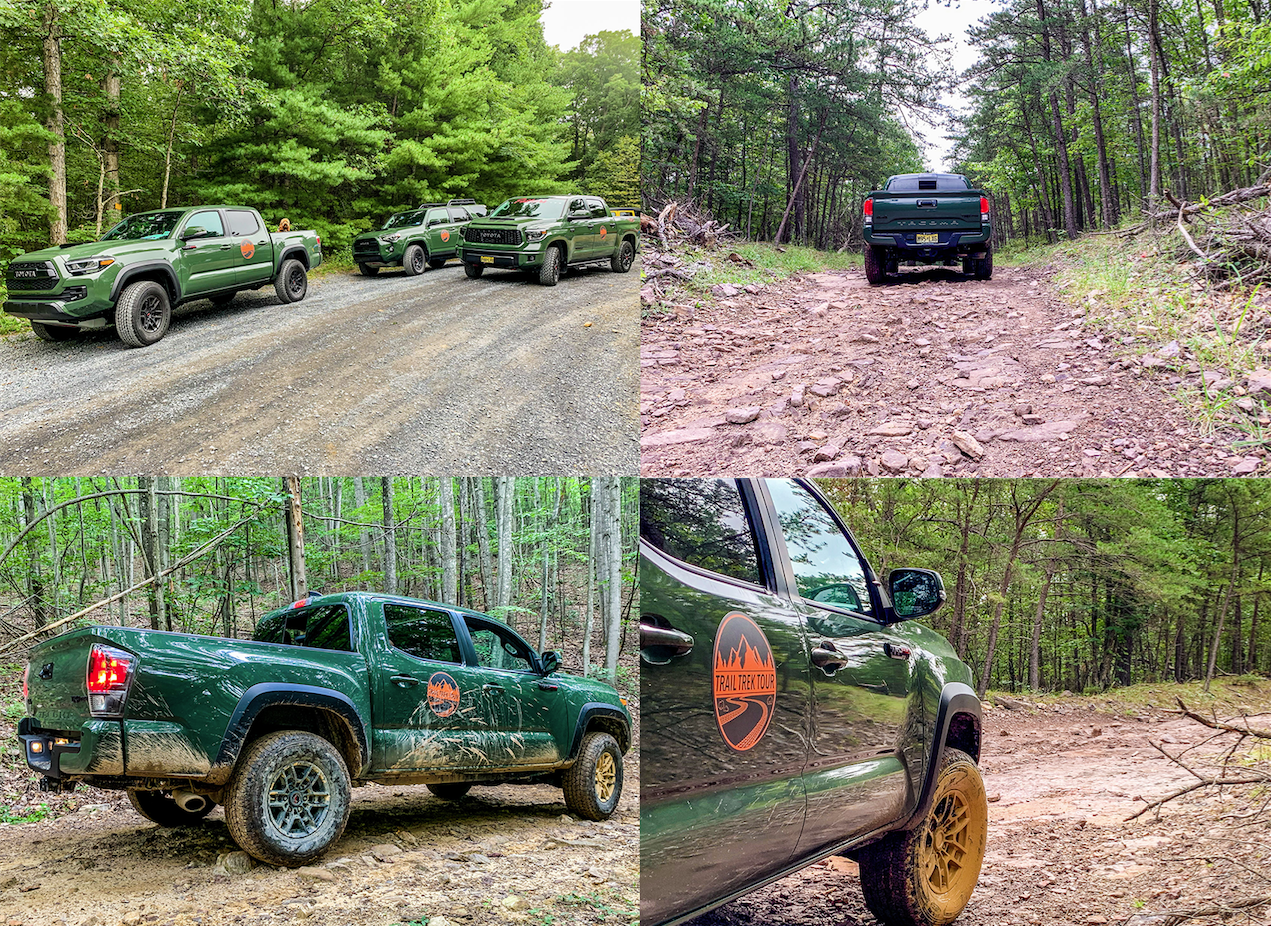