Vehicular roof-top tents (RTT) are nothing new. Campers, explorers, and people who couldn’t afford hotels have been using them for decades. But because everyone is an overlander now days, they have recently surged in popularity. There are so many styles, sizes, and cost options that there is an RRT for everyone.

I have recently sampled two roof-top tents from the opposite ends of the market. The first one was a conventional, large, affordable Smittybilt fold-out tent. This well-used two year old tent was attached to my friend’s ’95 Toyota 4Runner and it part of a budget set-up, which I’ll discuss in the future.

The second RTT I used was attached to the Honda Passport that I used to get to the Overland Expo East. This Roofnest Sandpiper is significantly different from the Smittybilt. This is a hard-shell, pop-up tent. It is about half the size of the Smittybuilt and costs twice as much. 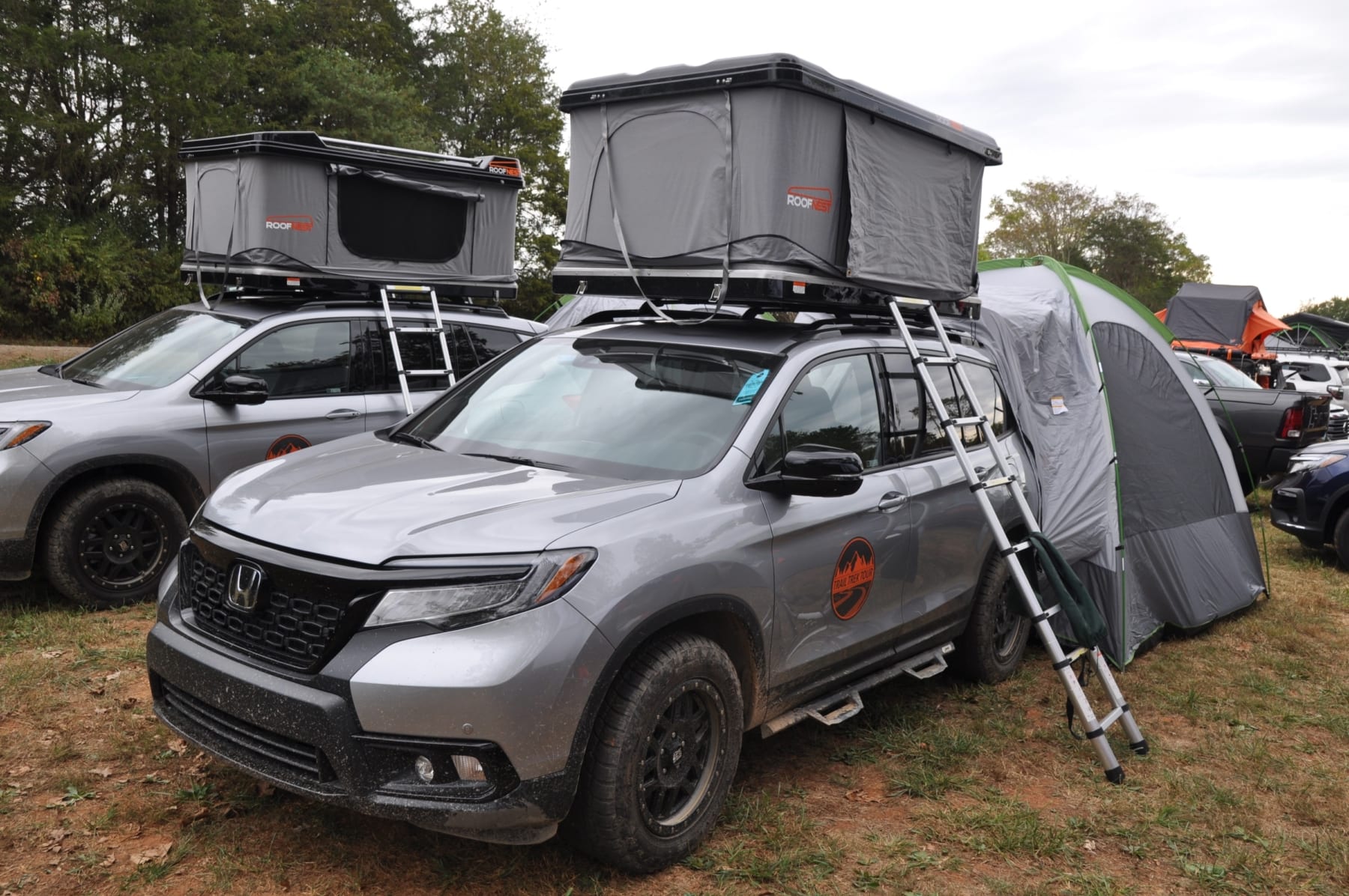 Please note that both of the tents I slept in were already mounted onto the vehicles. Each tent installation requires a strong roof rack and cross-bars installed onto the vehicle. Some planning is required for fold-out tents, based on the position of the hinges and the entrance to the tent. Any of these tents require at least two to people to mount onto a vehicle and about of hour to complete the full installation.

Setup of each tent varies dramatically. The Smittybilt has a multi-step process. First, the cover and straps need to be removed. It then needs to be unfolded. This process is relatively easy for one able-bodied person. The attached latter is used a lever to flip the tent open and as support once the tent is unfolded. Tighten the straps, attach the rain fly, and you’re done. Please see the below video from Extreme Terrain on the tent and how it works.

The erection (sorry) of the Roofnest Sandpiper is much easier. Simply unlatch the four latches, lift up the shell on front end until it pop-up, and repeat for the other side. Attach and secure the ladder to whichever side of the vehicle you want to use as an entrance to your tent. That’s it.

Both of these tents were much easier and much faster to setup than conventional ground tents. Each one has a built-in mattress, too. Being off the ground is also means being warmer at night and being on an even ground. I have seen people complain about RTTs in high winds but I haven’t experienced it. 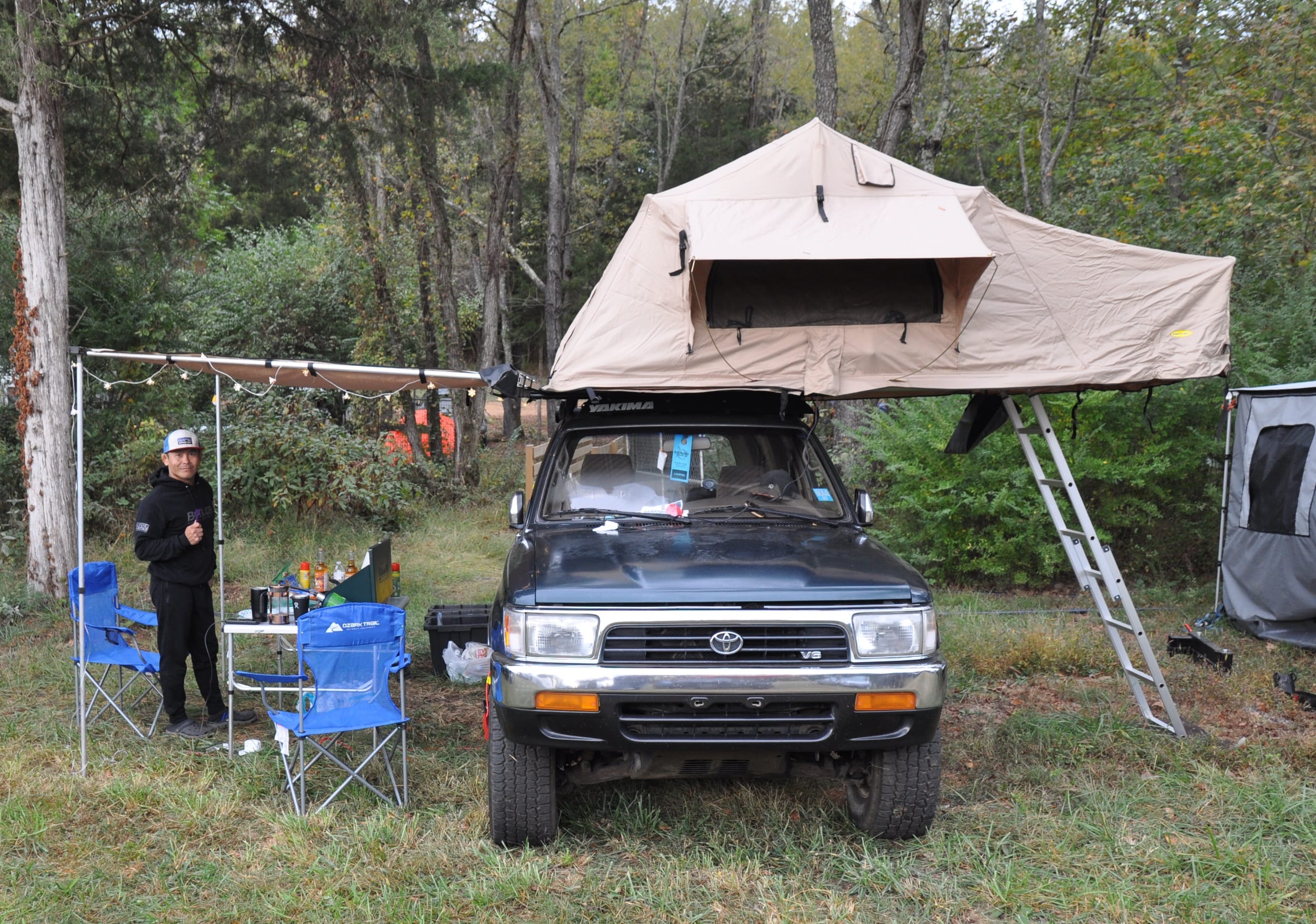 The downside is that each tent takes up almost all the space on your roof. Roofnest says that the built-in aluminum rack can carry 100-pounds of gear with the tent closed, or 50-pounds with it open. Place the Smittybilt strategically on your vehicle and a cargo box could fit behind or on front of it.

The second downside is that both of these RTTs add about 150-pounds to the roof of your vehicle. That is a lot of weight to be added to a place where it’s least desirable. Vehicle dynamics are impacted, as is the fuel economy. Surprisingly, wind noise was not much of an issue on either vehicle. 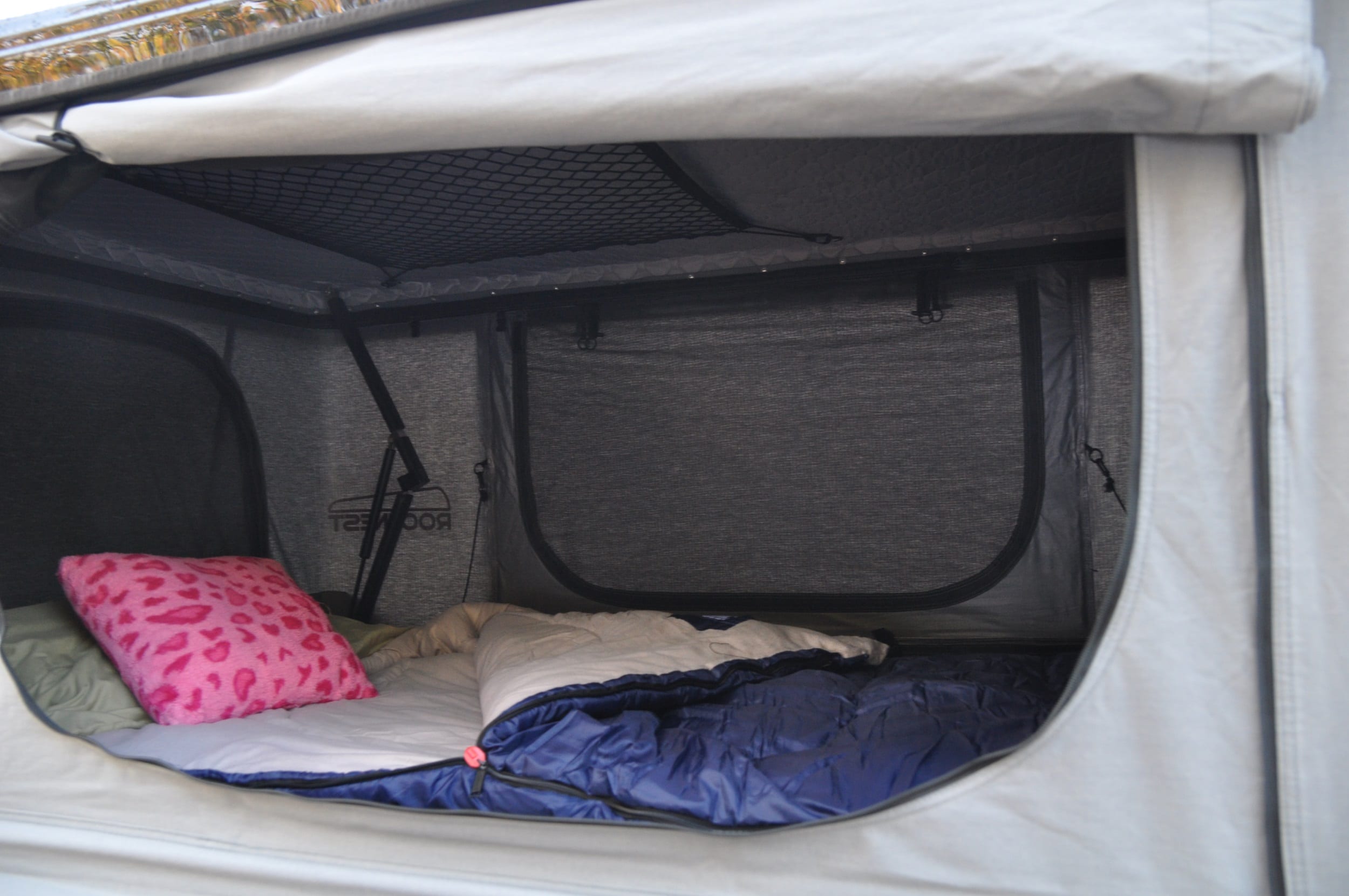 The differences between each tent are instantly visible. The floor of the Smittybilt is much bigger, at 93-inches by 73-inches. My friend says that he slept in it with his wife and three small kids, with everyone strategically placed in the tent. Ideally, the heaviest of people should be laying in the half of that tent that is over the vehicle.

The Roofnest Sandpiper has a much smaller, 82-inch x 49-inch mattress. It’s designed for two adults, preferably ones who have been previously intimate with one another. Something-something knocking something-something Honda racking. The 38-inch flat-roof height is sufficient but much lower than the 51-inch vaulted Smittybilt.

There is more to the Roofnest than just its hard shell and ease of use. The interior is nicely insulated. The tent fabric is very thick, more like an autumn coat than a spring rain jacket. The mattress pad is thicker and much softer, almost like a home mattress than anything I’ve seen in tents before. And the whole tent is generally of very high quality. 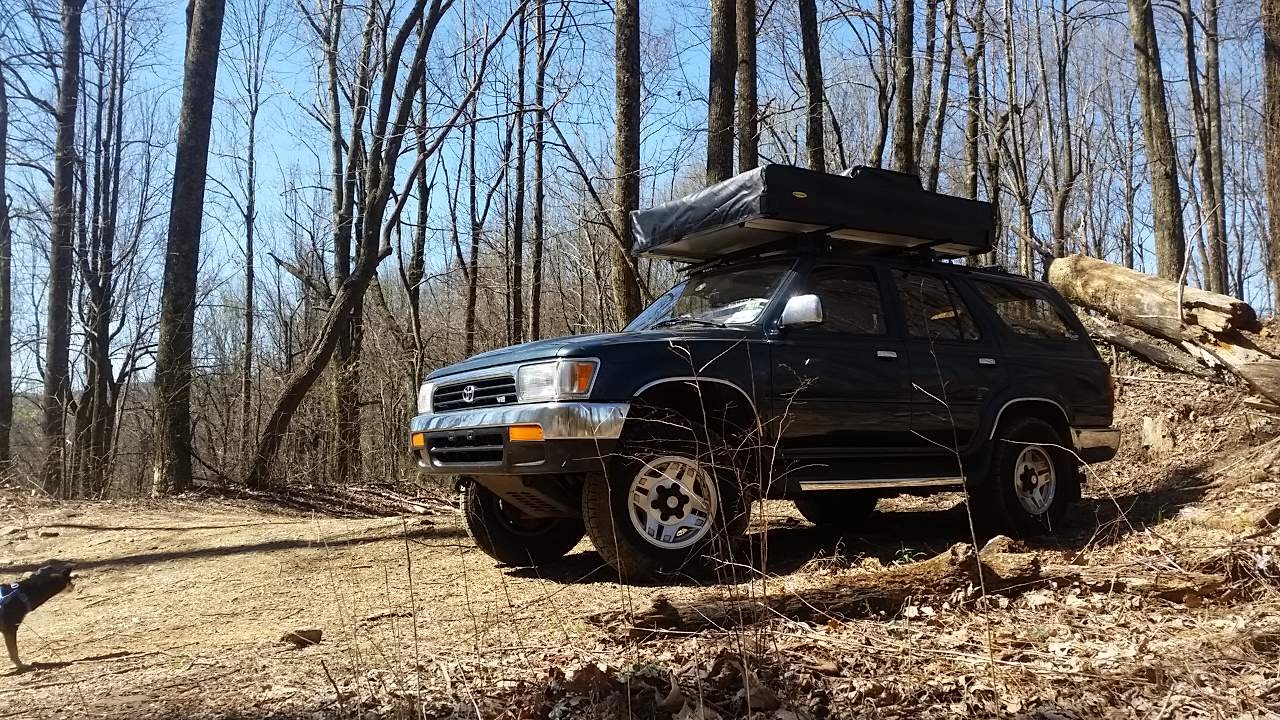 Climbing into and out of each tent is easy for most healthy adults. Kids should be supervised. I’ve seen people carry dogs up and down a tent ladder and that was sketchy at best. RTT usage and alcohol consumption, and the related night bathroom runs could, could prove adventurous to some. Make sure the vehicle is on leveled ground.

The benefits of RTTs are evident, as are their drawbacks. Their cost, size, and weight should not be ignored. Neither should their comfort and ease of set-up. To minimalists who want to keep their camping affordable and simple, as it should be, RTTs may not the right answer. For people who don’t want a RV and but don’t like the hassles of tents, or generally subscribe to the whole overlanding thing, RTTs are solid option. 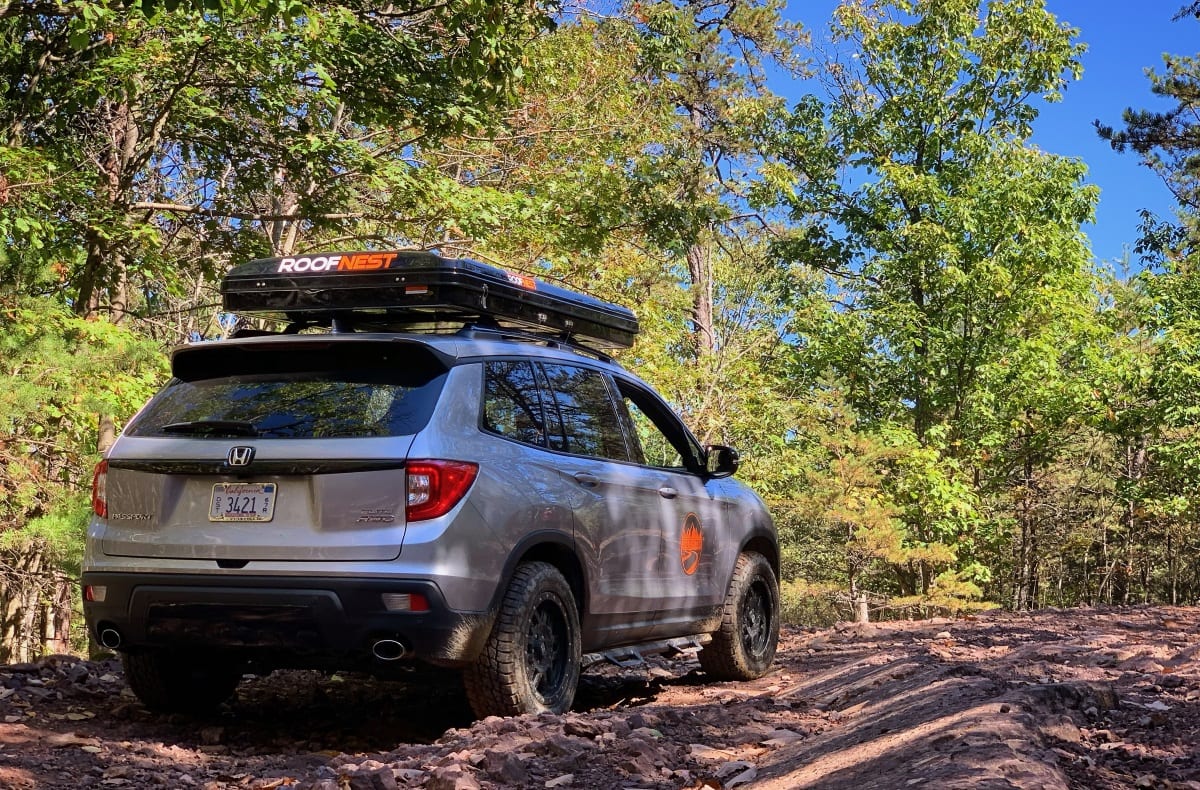 Disclaimer: Honda provided Roofnest tent, attached to its new Passport, for my trip to Overland Expo East, which was organized by Trail Trek Tour. My friend Vinny joined us.