The ski season of 2020/2021, as with most things these days, is like no other. The resorts require reservations and the lodges have strict capacities. Tables are limited for people and time. No bags can be left in lockers and no food self-served. My kids’ ski school director directly suggested using one’s vehicle as a makeshift lodge.

That last part made me wonder – what mainstream new vehicle would make for the best impromptu ski lodge?

By coincidence, for the first weekend of the 2021 ski season, Honda has lent me their recently updated minivan, the Odyssey. So let’s see if the loaded Odyssey Elite (bad name for a vehicle model) has what it takes to be an impromptu ski lodge. 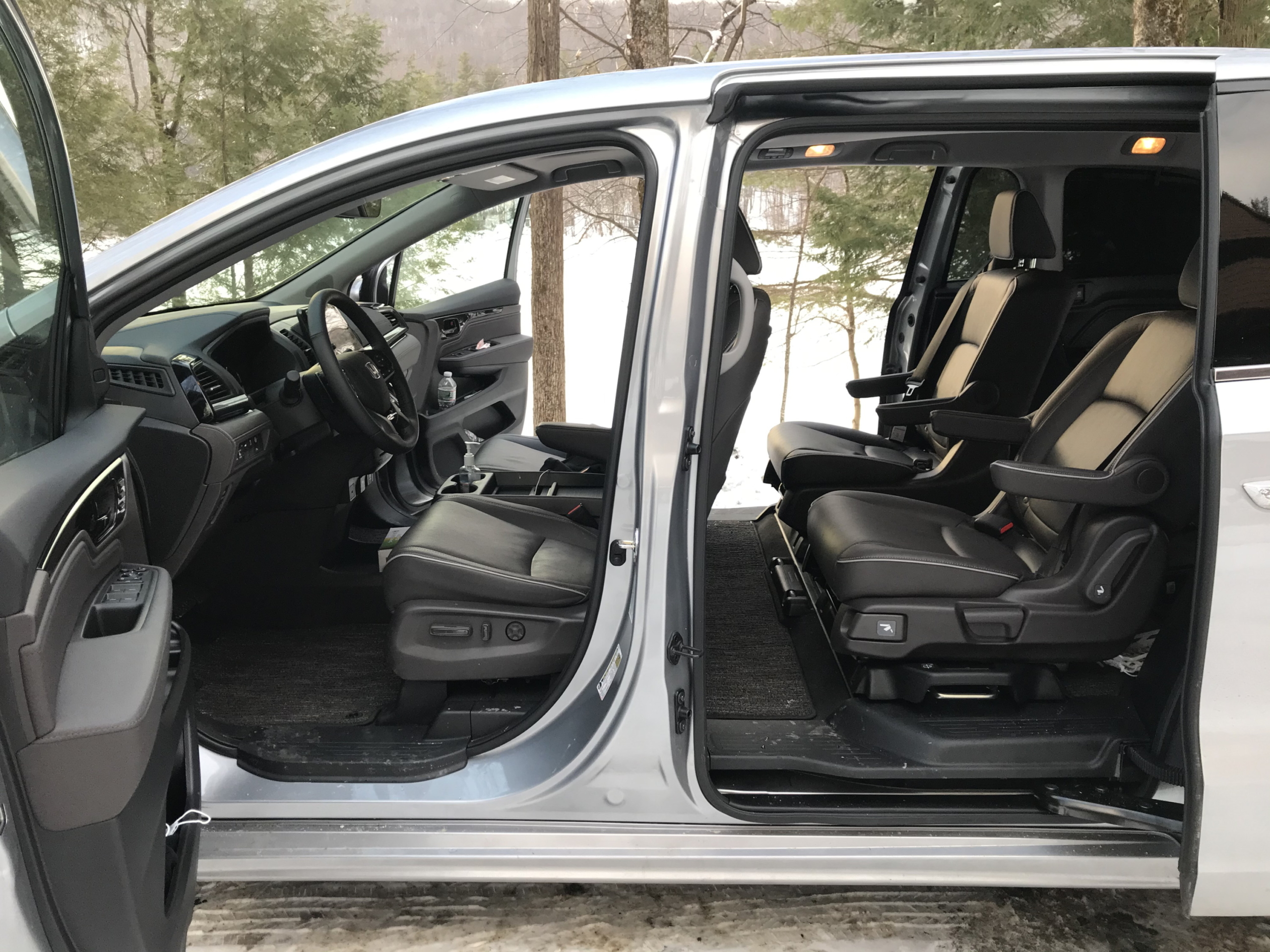 It is beyond comprehension why sliding side doors are strictly limited to vans and the Peugeot 1007. Sliding doors are brilliant. They provide a large opening with access from all sides. Sliding doors don’t bang into other things when opened. Sliding doors won’t fly open or get shut by high winds. And in most minivans, sliding doors have power functions and can be opened or closed from the driver’s seat.

Power rear hatches are nothing new thing but the Odyssey one is slick. Most power hatches have typical hinges and a push-rod on the side that performs the opening and the closing of the hatch. On the Odyssey, there is no push-rod. The operational mechanism was neatly integrated into the two hinges in the top corners of the hatch. Opening the hatch from the rear requires a sweep of the leg near the bumper. Too bad Honda did not include that for the side sliding doors like the new Sienna. 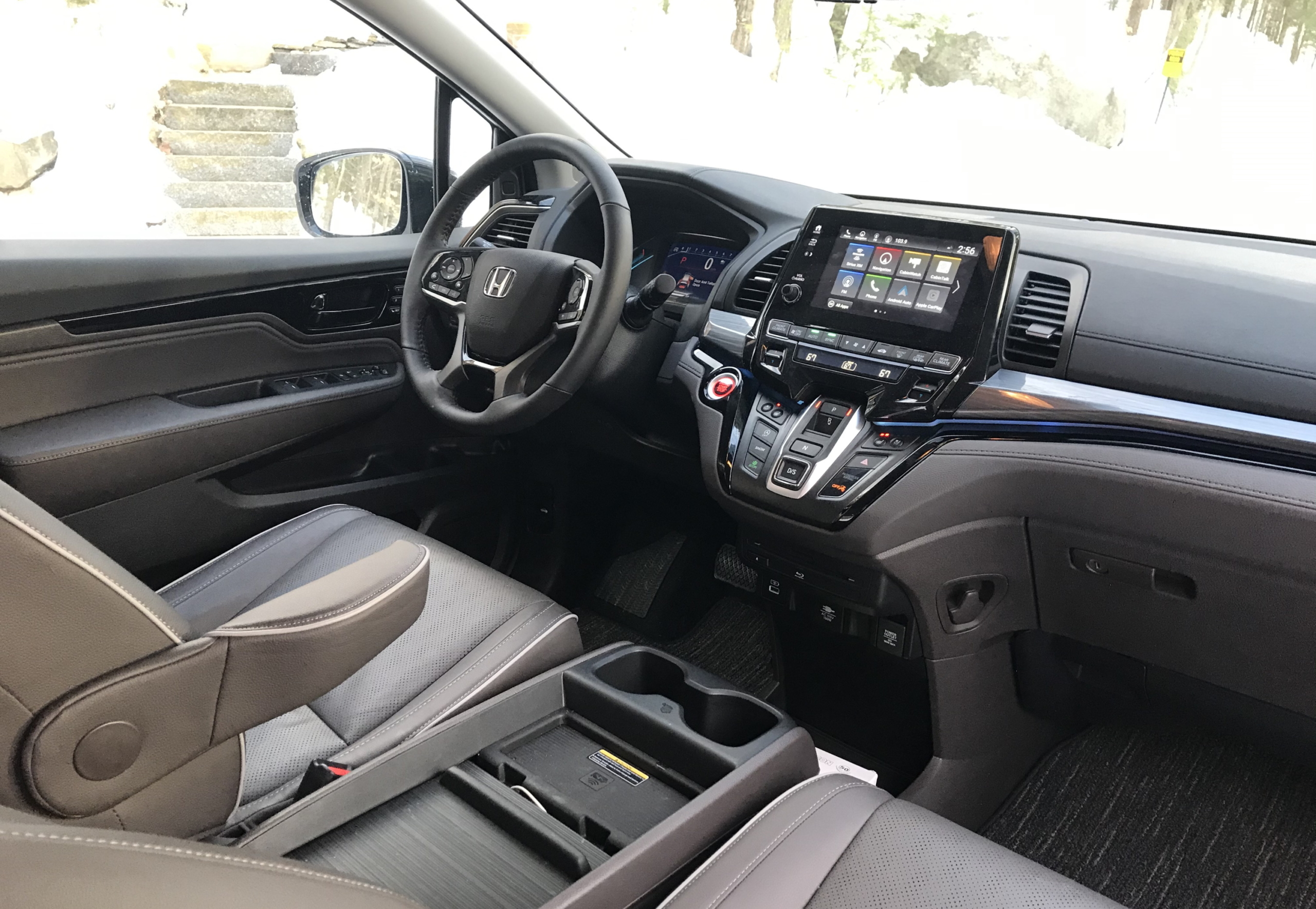 Space is always underrated and no family vehicle has more usable space than a minivan. Front seats have an abundance of room in every direction. There are two main cup-holders and four more in the doors. The deep center console, a sliding hidden console, door cubbies, and an open space for things such as purses or a ski helmet. All the controls are logically located and easy to use, like other most Hondas. The infotainment system interface has been updated and seems faster and easier to use. The premium audio system on this model sounded very good, too.

The two front and the two outboard middle row seats are similar and very comfortable. The front are heated and ventilated, all are wrapped in very nice, soft leather, and all have individual armrests. It used to be that cup-holder count was the most important thing in minivans but now the focus is on USB ports and 12v sockets. The Odyssey has an abundance of all of those throughout the cabin. There is also an HDMI port for the video screen (standard in the Elite) and a 120vAC household socket, located not-so-conventionally below the center console.

The tricky middle row seat of the Honda is also spacious. It is tricky because the center seat can be removed, providing a path to the back. Then both of the side seats can slide sideways, creating a two-person bench and a side path to the rear bench. That side sliding feature has a purpose in skiing – when a seat is slid to the center, the floor can be used as a bench to change out of your ski boots.

There is one thing that is lacking in the middle row. On Honda’s direct competitor, the new Sienna, the middle row seat can slide much further back, giving those passengers limo-like legroom. That renders the third-row bench rather useless but for my purposes of a four-person ski lounge, I kept that bench folded anyway.

The three-passenger third-row is split into 1/3 and 2/3 parts. It tumbles neatly and flat into the large well behind it, creating a large flat loading floor. My kids informed me that the third-row bench is “fine”, which is fine because it’s unlikely that adults will actually sit there. It should be noted that all three middle-row positions and outboard positions in the third row have both lower anchors and upper tethers for kids’ seats purposes. 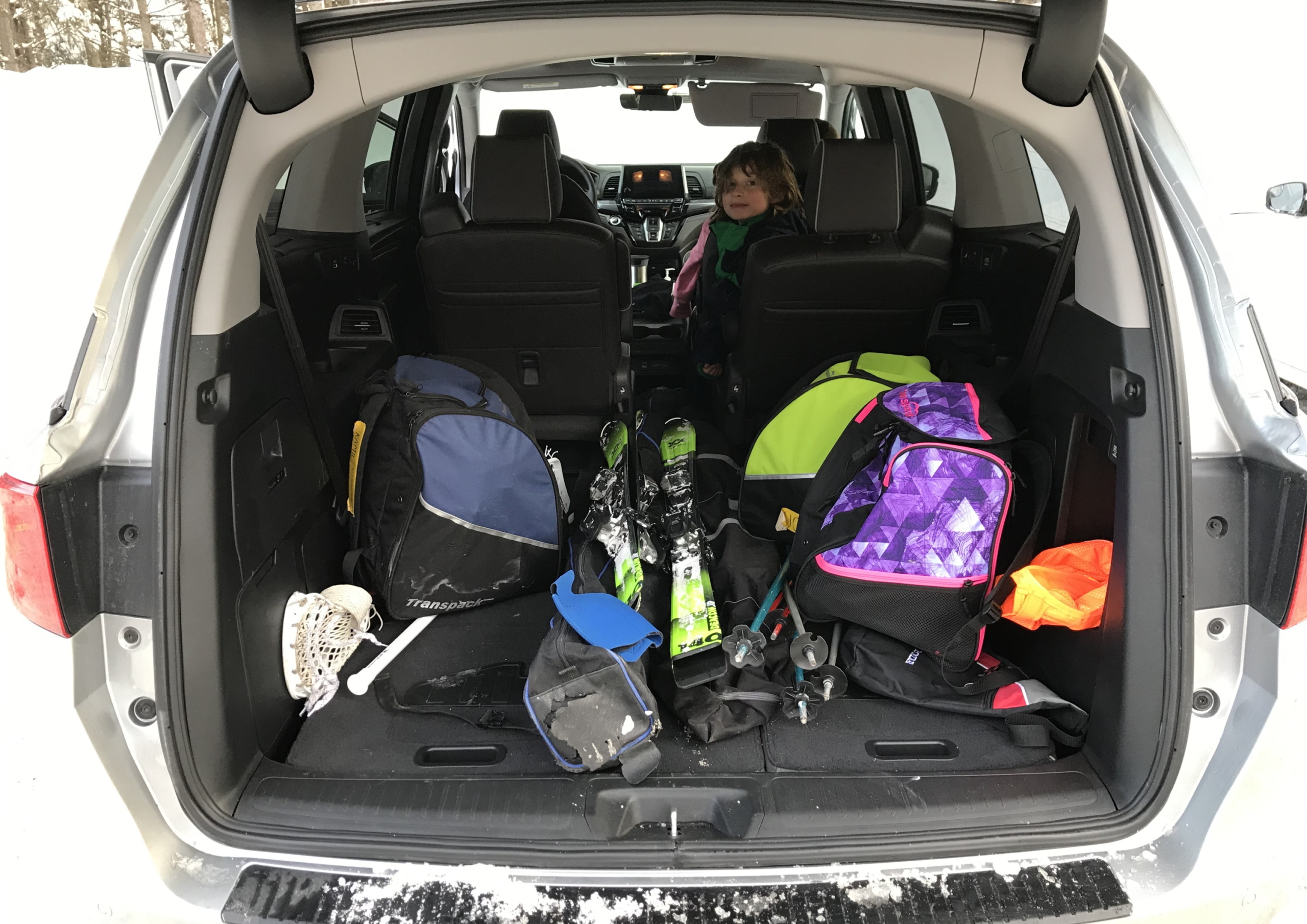 With the third row up, there is a huge well on the floor that’s ready to swallow up half a dozen carry-on sized bags, maybe more. There are hooks for shopping bags, too. With the third row folded flat, and the two middle row seats moved to the sides, a very long set of skis can easily fit. Poles, shorter skis, and boot/gear bags easily fit, and are easily accessible, behind the third row.

Most importantly, there is a built-in vacuum cleaner. The hose of that vacuum cleaner extends all the way to the driver’s pedals. The vacuum itself works great. It’s got really good suction, comparable to that of ShopVac, but it is a dry-only vacuum. 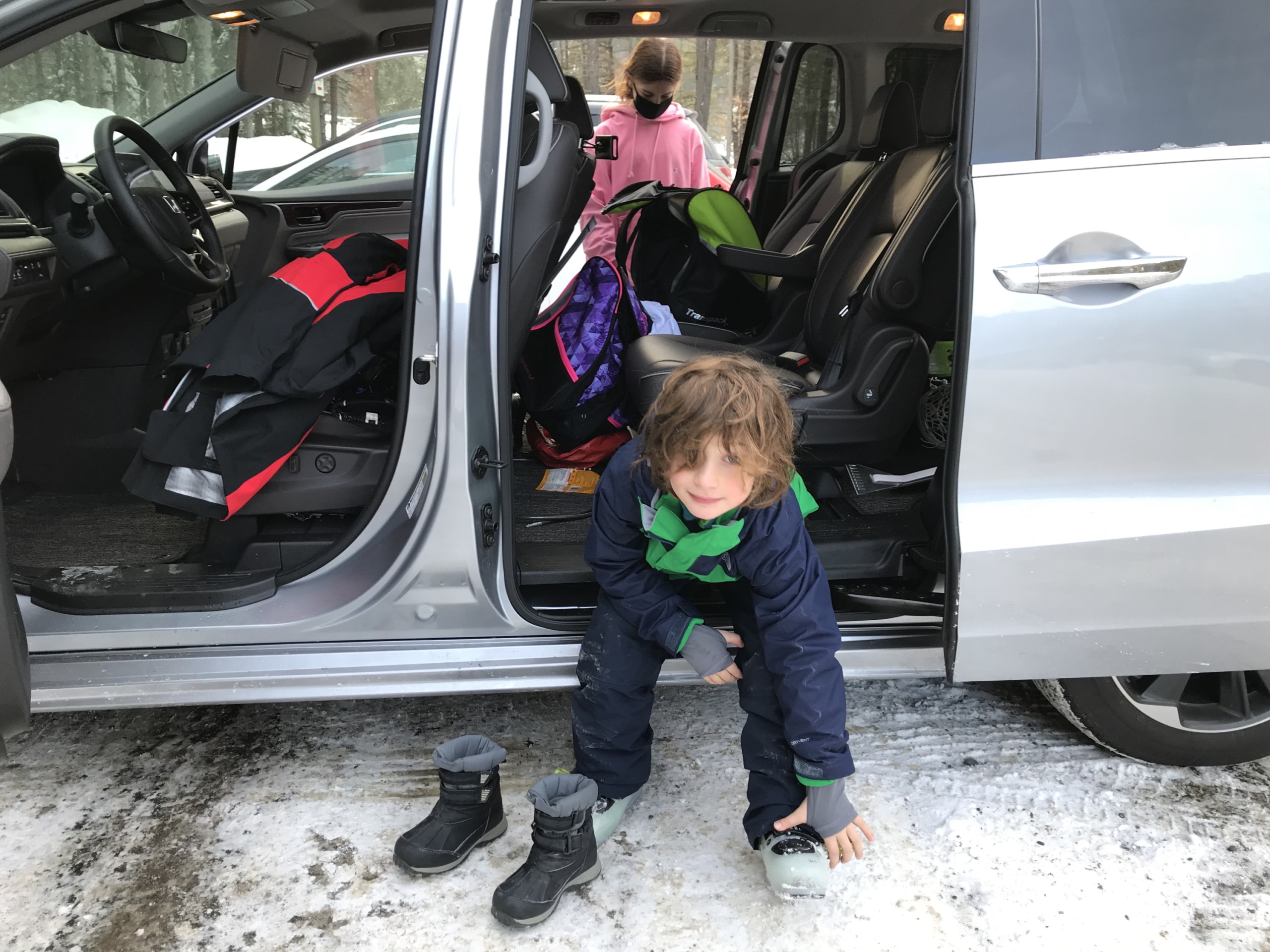 The Odyssey is powered by Honda’s proven 3.5-liter SOHC V6 engine. In this application, it makes 280-horsepower at 6000rpm and 262-lb.-ft. of torque at 4700rpm. It is connected to the front wheels via a 10-speed automatic transmission. While this is a very solid, efficient, and smooth powertrain, it is a little dated. The Chrysler Pacifica is available with an all-wheel-drive system or a plug-in hybrid powertrain (but not both in the same vehicle). The new Toyota Sienna comes exclusively with a hybrid engine and has an optional all-wheel-drive system.

What the Odyssey lacks in powertrain technology, it makes up for in ride. It is significantly quieter than the new Sienna (which I drove just two weeks prior). The power delivery of the V6 is much more linear than that of the hybrid engine if a bit less dramatic off the line. It’s difficult to articulate the handling of a minivan but they’re all fine. The Honda seemed to handle road imperfections better. There are also notably no weird noises or rattles from the interior, which is something I noticed in the Toyota. 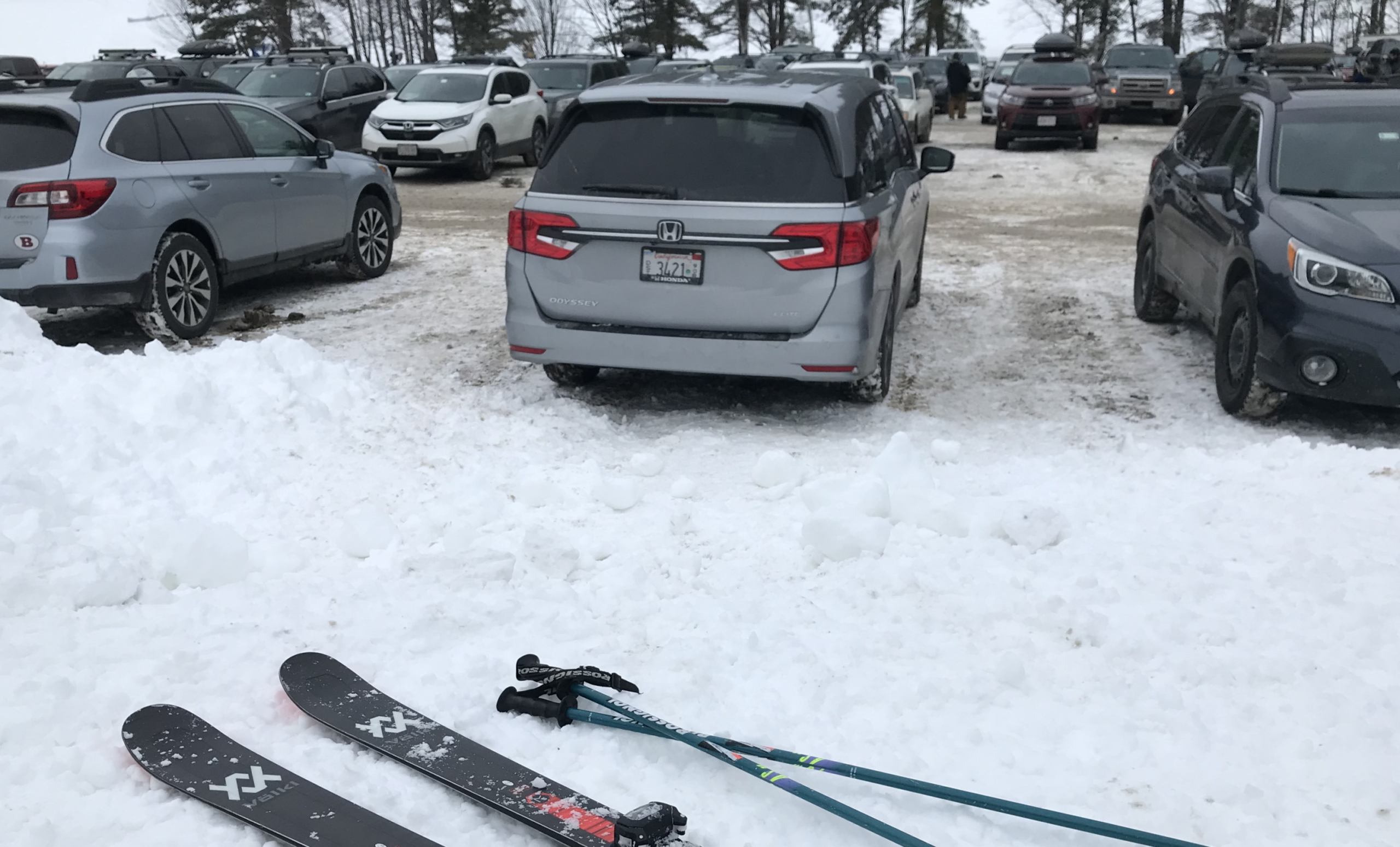 Getting into a cold lodge isn’t ideal but the interior of the Odyssey warmed up surprisingly quick, even with ambient temperatures in single digits. Heated seats and steering wheel got warm almost instantly. When kids kept getting in and out of the lodge, it was nice to be able to remotely close the doors when they forgot to. Light jazz on the great audio system made sipping of thermos coffee and hot chocolate pleasant, while the small people watched movies.

There are some ways to improve the Mobile Ski Lodginess of Odyssey. Winter tires would significantly improve snow traction. There is a “snow” mode but I couldn’t really feel any difference with it enabled. AWD and snow tires would be the ultimate combination. Roof rails and crossbars ($355 and $204, OEM Honda accessories) would provide support for a roof pack or ski mounts. Finally, I’d replace all floor mats with deep rubber versions.

With the world and the ski season being way different this year than ever before, the minivan provides some solutions. It can serve as an excellent road trip (if/when/where allowed) vehicle and as a solid home base for socially distant activities. The updated 2021 Honda Odyssey starts at $31,790. The fully loaded Elite model discussed here was nearly $50,000 but there are three others in between. 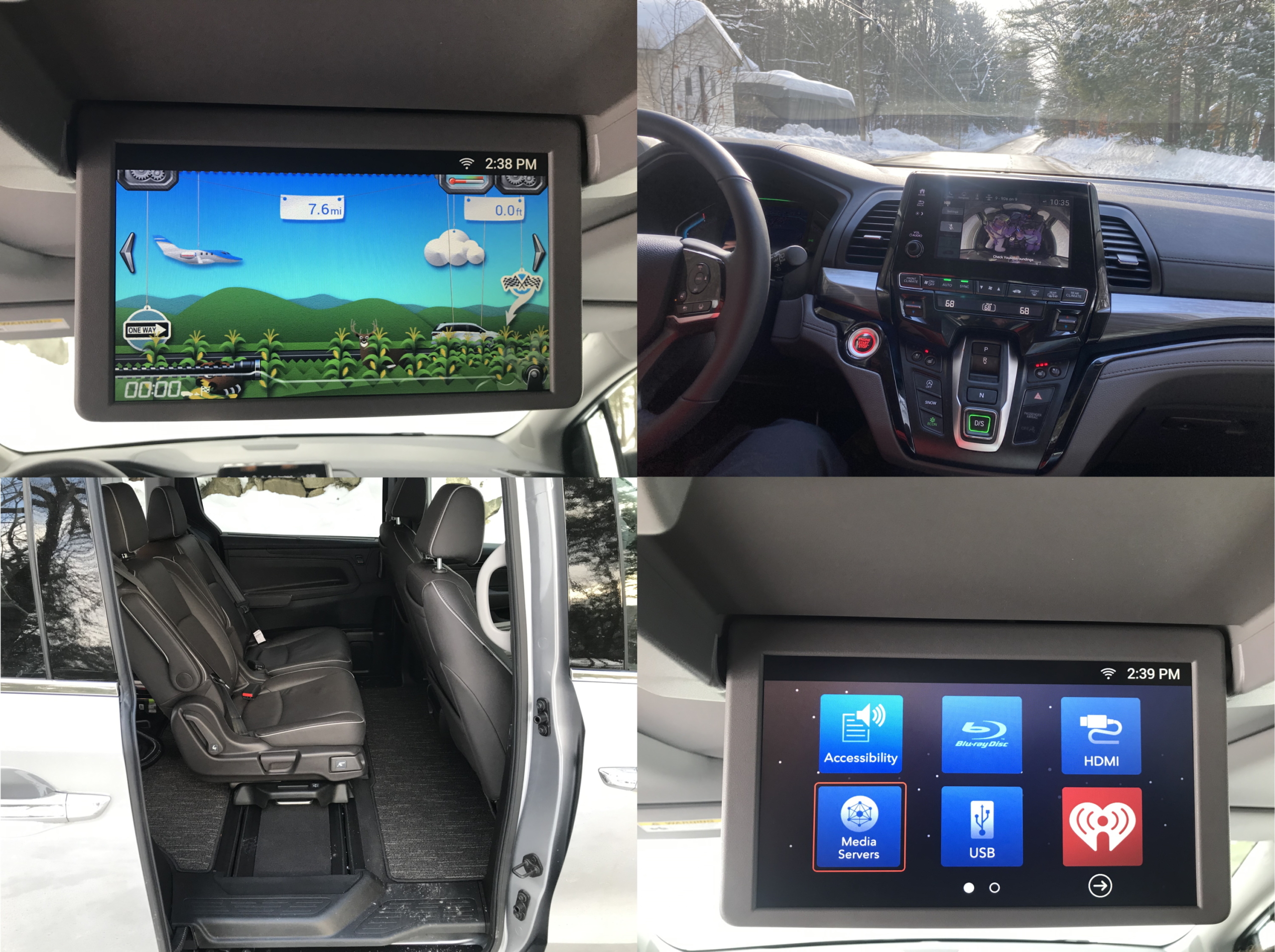 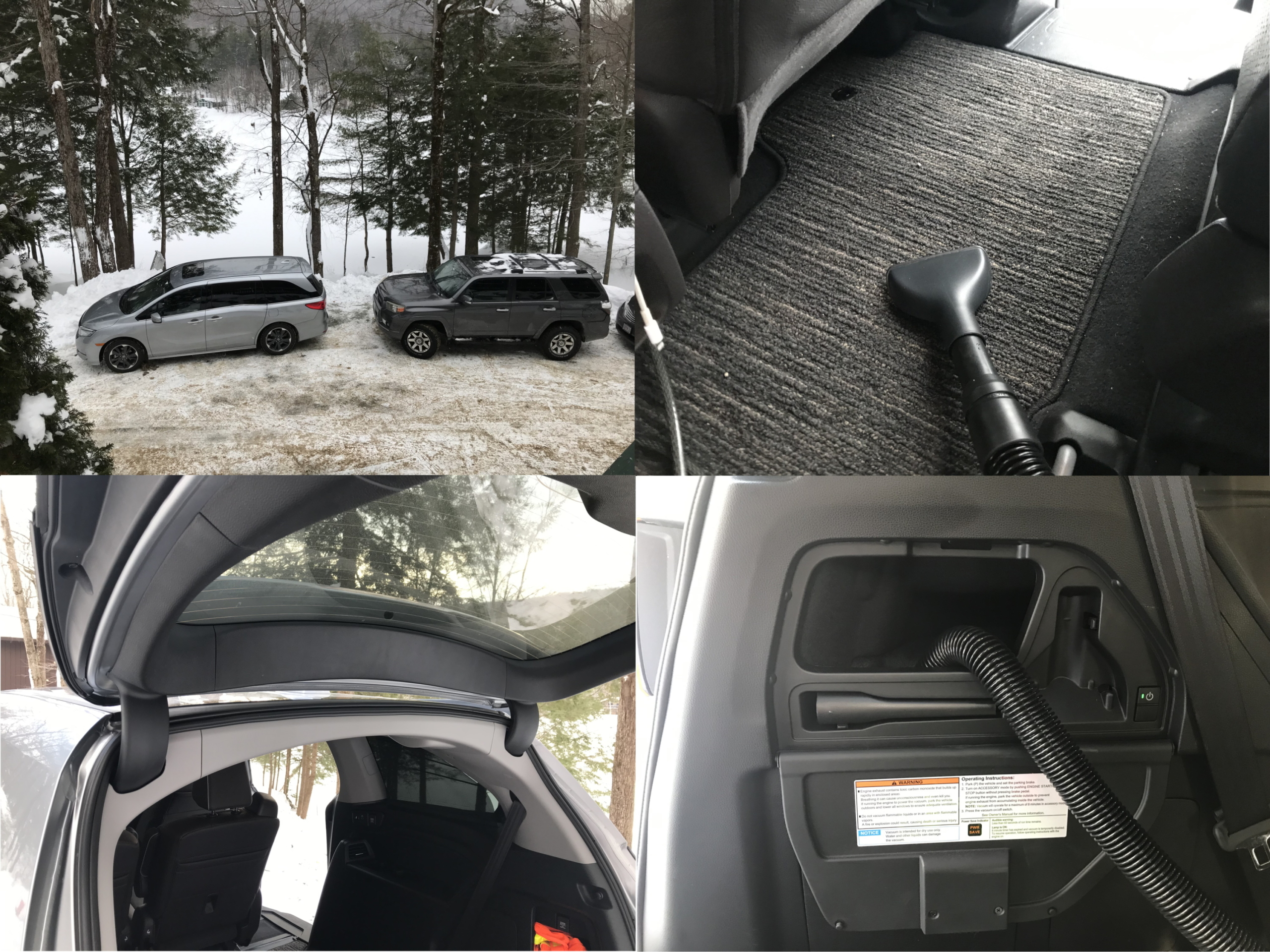