The Ford Bronco: Expectations vs reality

It’s as widely discussed as anything short of COVID, but 2020 has finally brought us something good: A new Ford Bronco has finally broken cover and will soon be on its way to dealerships, streets, and trails near you. It’s been a long, long time coming (not as much as NSX and Supra, but close). Years ago I was writing a series about the then still-unreleased JL Wrangler which I very creatively titled “What Jeep needs to get right with the upcoming JL Wrangler” and it got me thinking about the lack of competitors. 4Runner, sure, but the roof doesn’t come off. It led me to the possibility of the Bronco returning, and so I wrote a piece called “What the new Bronco needs to be a worthy successor.”

This piece was first drafted sometime in 2016. I completely forgot about the mostly-written article and so it disappeared into the depths of my Google Docs folder. But when searching for another long-forgotten, unrelated article, I stumbled upon this one. Now that the Bronco is finally, fully, officially here, it only makes sense to revisit this piece and analyze what I was hoping we would see from Ford’s famous off-roader versus what we actually got. 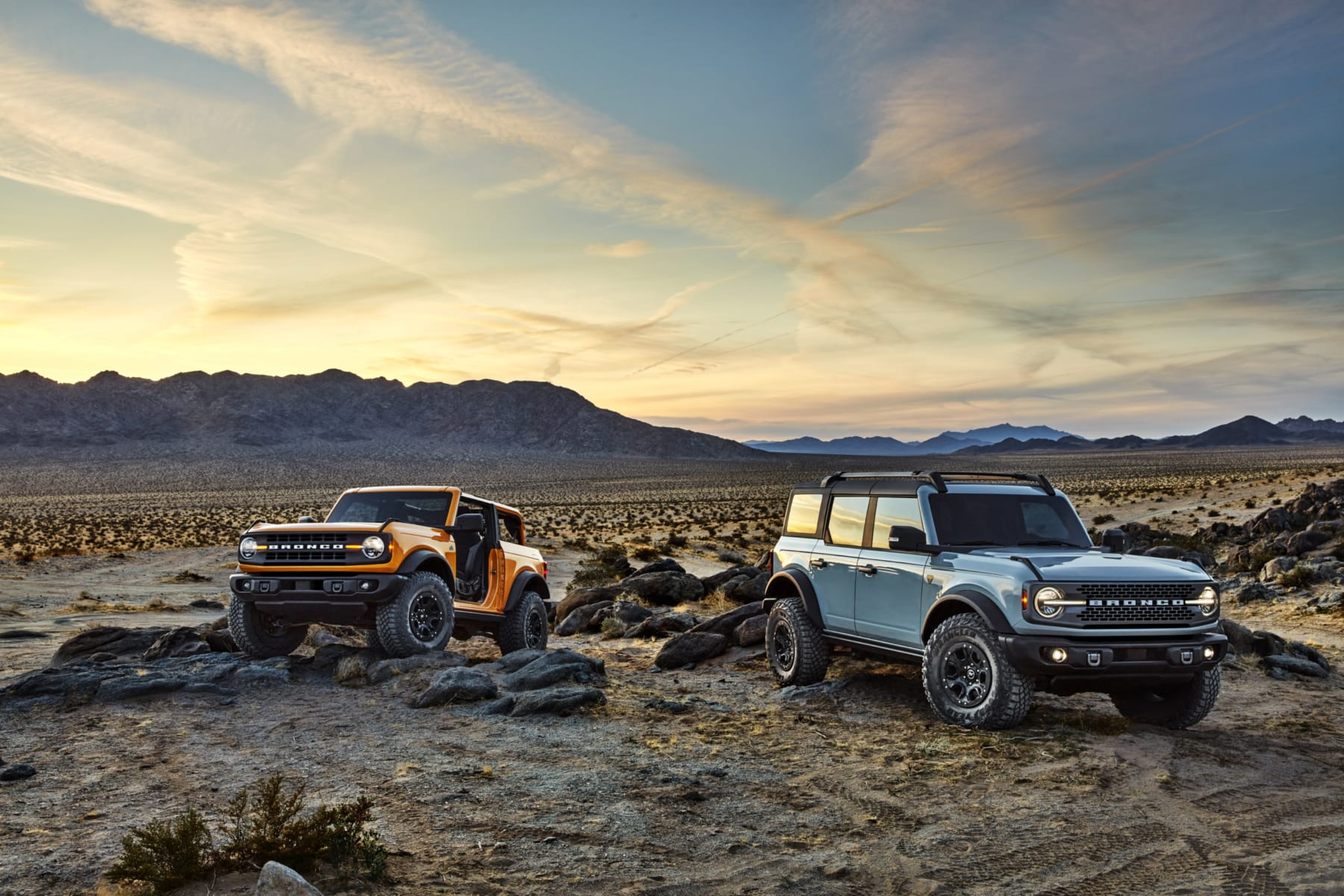 Without further ado, let’s find out if my hopes and predictions were right. Years ago, here’s what I wrote:

“So, the Bronco is coming back. Finally. Or supposedly, at least. It’s been twenty long years since we last saw a Bronco for sale on U.S. soil. and the revival of one of the most iconic 4×4 nameplates should be a marketing force at Ford. But that doesn’t necessarily mean that the rebirth of the nameplate will mean the 2018 model will live up to its past. Ultimately though, Ford’s just hoping for a sales hit; whether it’s true to the Broncos of yore means nothing when it comes to finances and the fact that selling cars is a business. But what would Ford need to pull out of its sleeve in order for the new so-called Bronco to be a worthy successor? Read on to see if you agree. 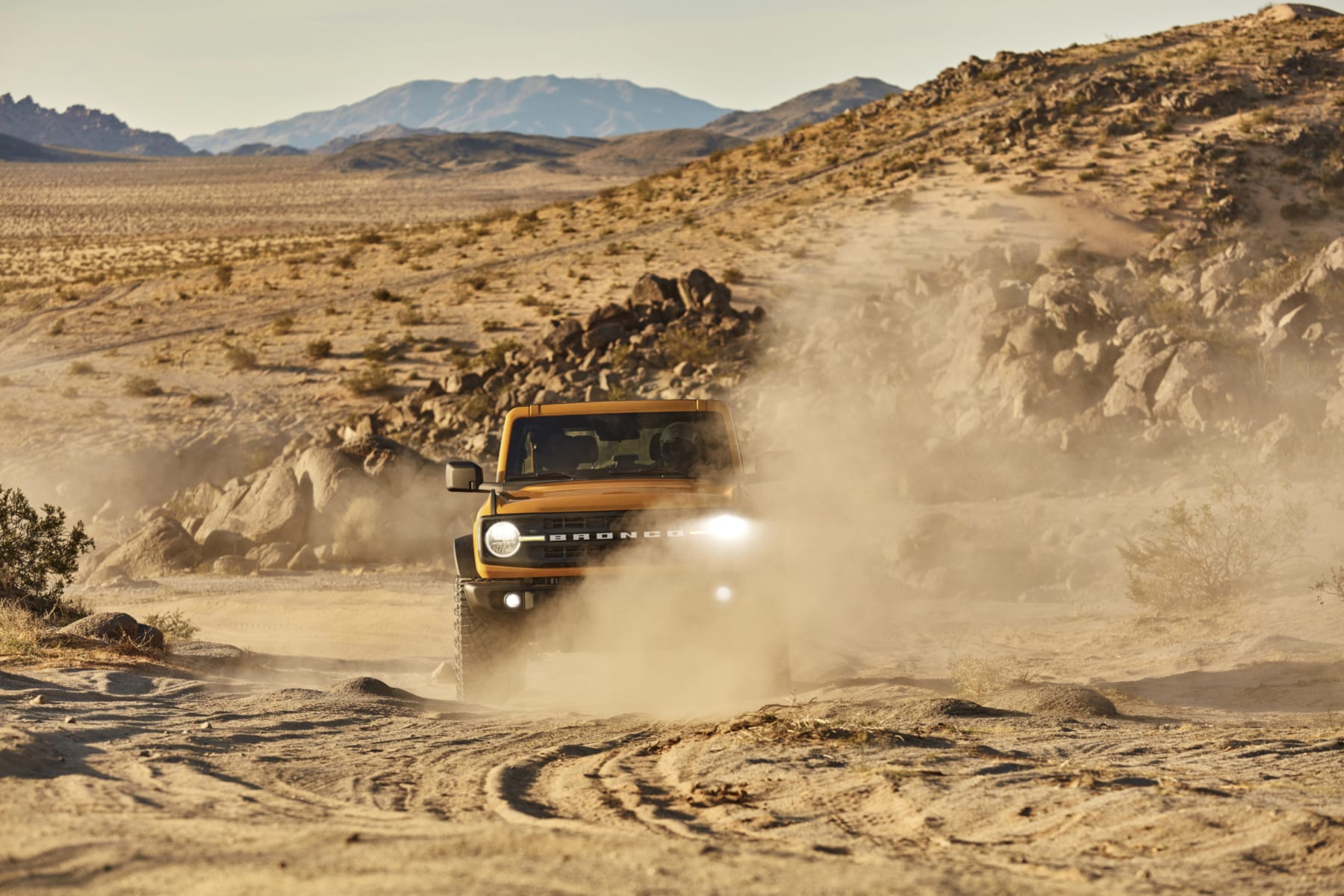 Recently, Jalopnik’s Andrew P Collins wrote a piece in which he predicted that the new Bronco won’t in fact be a Bronco at all. I’m not here to argue that. Sadly, it’s unlikely the reinvented Bronco will share a body configuration with its predecessors. Much more likely is that it will be similar to, if not identical to, the Everest full-size SUV, which is based on the global Ranger platform. Obviously a large, four-door SUV isn’t the ideal body– we’ll get to that later– but it’s a lot better off it goes this direction rather than that of the front-wheel-drive Nissan Murano CrossCabriolet abomination. Assuming it is actually on the Everest platform, the new Bronco will probably have four full doors, a hardtop, and dimensions larger than any of its predecessors had. Platform sharing– and not creating a new chassis for one single vehicle– is the name of the game here, as is nameplate usage for the sake of marketing. As such, a two-door body or a removable top would be a surprise. By using an existing base, Ford can crank out a bunch of SUVs with a name people see as important affixed to its side and tailgate, and can easily capitalize on nostalgia. It’s a great idea, in theory, and in practice, being that selling cars is in fact a business. Can’t say I would blame them for taking advantage of it. I’m surprised it hasn’t happened already, honestly.

[I was pretty close. It’s Ranger-based, larger than before, and well, I was *thankfully* wrong about there not being a removable roof. Though the Bronco Sport is much more of what I wrote. Replace Everest with Escape and it wasn’t a far-off prediction.]

But what the Bronco needs to be a sales success is very different from what we’ll want to see in order for it to be a success in enthusiasts’ eyes. So, what would play into that classic off-roader formula that could create a modern masterpiece?

First and foremost, the body. Nothing is a true and proper Bronco unless it’s a boxy two-door. Any more and it’s just a Bronco in name, nothing more. Next is the top: it has to be a solid one-piece removable unit, just like all of us imagine when we hear “Bronco.” As for its stance, it has to have something resembling off-road-worthy ground clearance; it doesn’t have to be a class-leader, but it needs to claim more off-road capability than the crossovers can. Once these boxes are ticked, the most important items are taken care of. I won’t call the rest “arbitrary,” but it’s not as vital to the Bronco mantra as is the way it looks and the sense of rugged aggression it gives off.

[This is what everybody– not just myself– wanted and Ford delivered. We even got a removable roof with sections that pull apart like those on the Wrangler. The ground clearance is fantastic and it has truly great off-road capability…or so they say.] 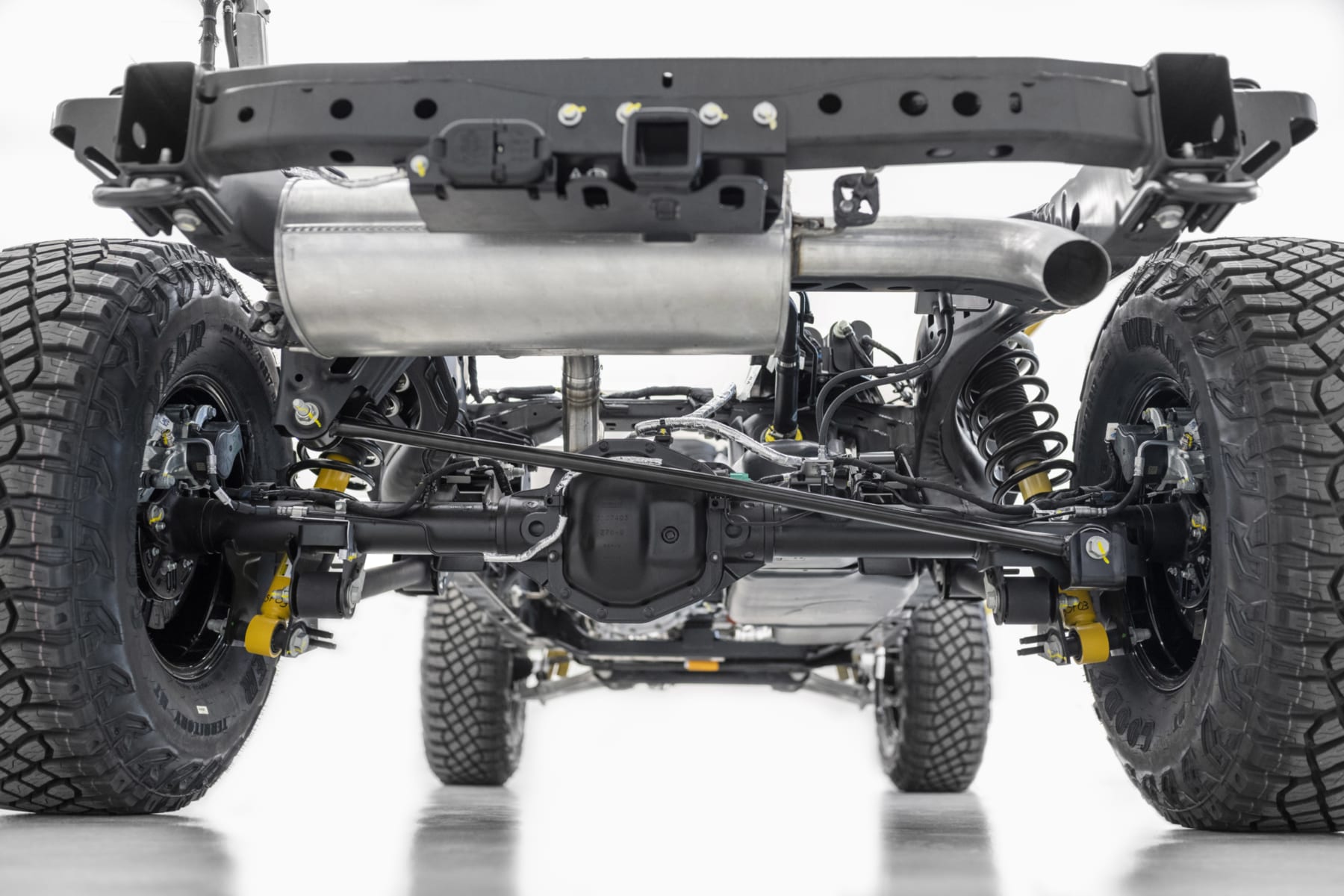 But there’s more that we care about; appearance is nice, but it has to back it up. On the size front, it would be nice to see it situated such that the interior is roomy enough to fit four people comfortably, but with small enough exterior dimensions that it’s easily placed off-road and not an un-maneuverable behemoth on the streets. Obviously though, we want to see a removable roof. I can’t stress this enough. It simply isn’t a Bronco without the opportunity for an open-air experience. 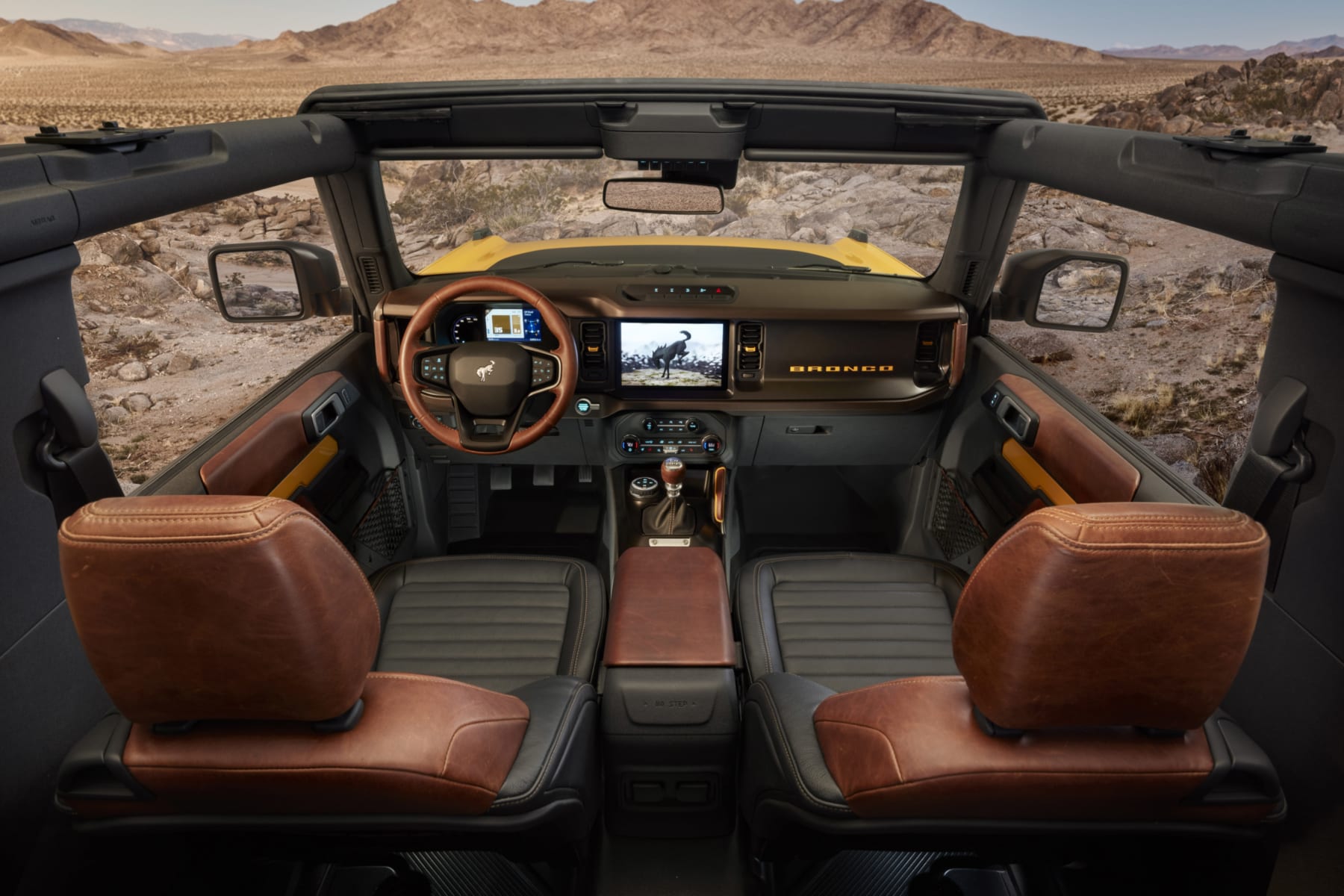 As for power, the option sheet *could* be graced with a slew of options, but don’t get your hopes up. It would be great to be able to pick from the 6.2L V8, the 3.5L EcoBoost, the Raptor’s twin-turbo 3.5L EcoBoost, and a small turbo-diesel. Each has slightly different strengths, be it low-end power, high-end power, fuel efficiency, or tune-ability, but ultimately it’s more than likely that the truck would come with a “standard” EcoBoost motor, at first at least. That’s especially so if it’s an Everest-based truck. While powertrain options would be a good treat, it’ll be a treat in enough itself if we get an actual Bronco, true to its name, at all. Engine choices would just sweeten the deal.

[Close…ish? I had the EcoBoost part right, at least. Just the wrong options: 2.3L turbo-four and 2.7L twin-turbo V6. No word on the 6.2, but I’d wager the 3.5L twin-turbo V6 from the Raptor is the more likely high-performance option should Ford want to fight Jeep’s imminent 392, 6.4L V8-powered Wrangler.) 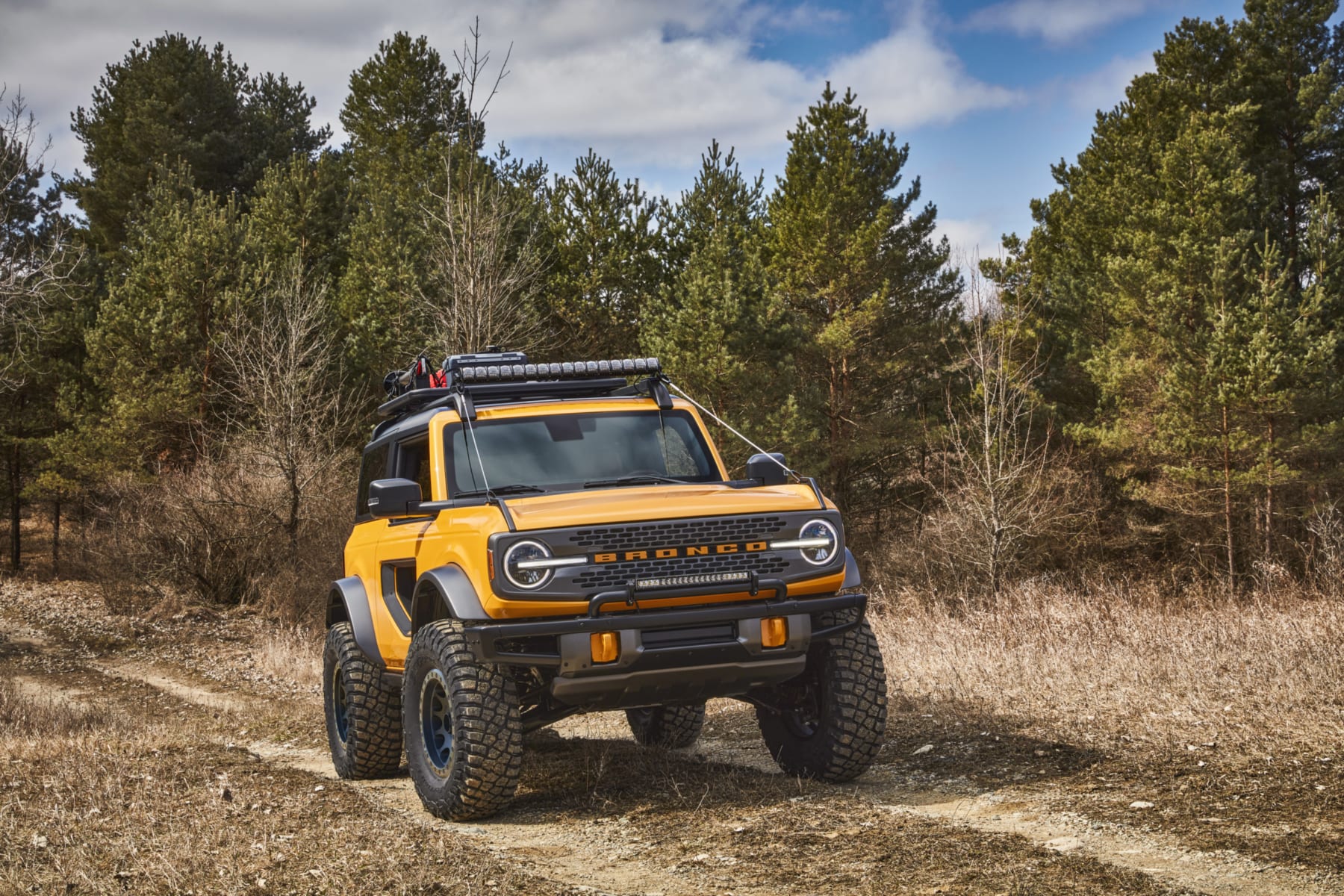 How about a Bronco Raptor? Not that the name “Bronco Raptor” would make sense considering, you know, science, but a long-travel, wide-body, Baja-beast of a Bronco would be a hell of a hooning toy. Among the most fun available, I’d wager. Priced at around $40-50k, and it would sell incredibly as well. Also, there could be a Rubicon-esque model, with lockers and electronically disconnected sway bars and such. Now I’m just daydreaming though. Oh, and one more trim would be nice, for nostalgia and shit’s sake: an Eddie Bauer Edition.

[We got the good stuff– i.e., locking differentials, electronically disconnectable sway bars, a low crawl gear in the manual (and even a manual at all), etc. But the Raptor-ified version is something we have yet to see yet if it’ll exist at all. The top-tier trim will push $50k. A Raptor-esque trim would easily push $55k. Before options.] 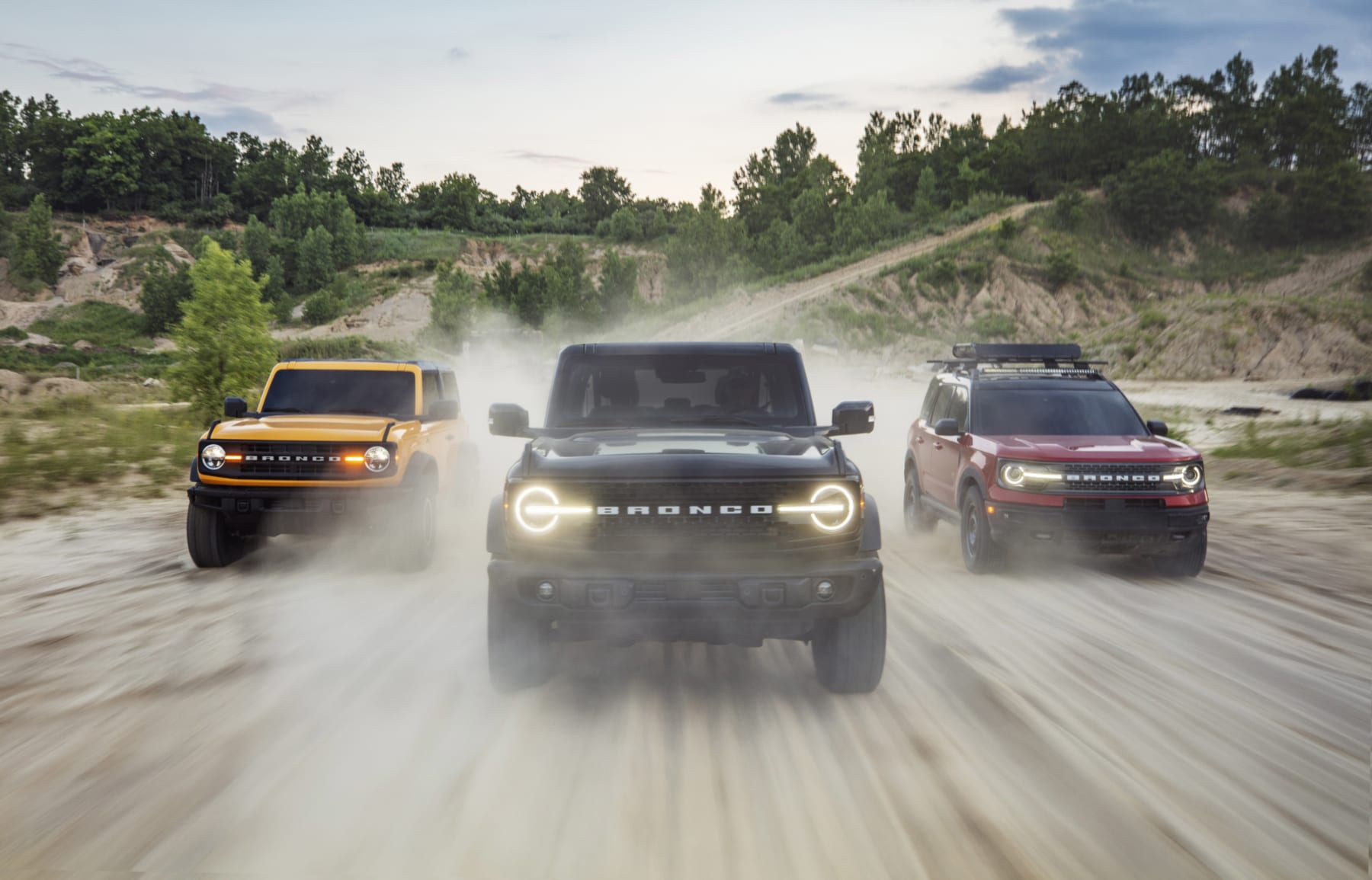 Snagging a piece of the market

Ford would be missing out on a huge opportunity if they don’t go after the Wrangler. The Jeep operates in what is, short of the Evoque Convertible, a monopoly in the four-wheel-drive topless segment. They move a huge quantity of Wranglers– 200,000 in the U.S. alone last year, according to GoodCarBadCar. For Ford to not take advantage of what’s a wide-open chance to be competitive, that would be a poor choice on their part. A modernized Bronco doesn’t need to be a full-on Jeep beater, but a good looking, rough-and-tough convertible SUV with a hint of off-road cred and the Bronco name on it would almost have a free pass to good sales figures. And how great would it be to see a newfound off-road battle to counter the on-road horsepower and supercar wars? A modern Bronco fighting the next-generation Wrangler for king of the dirt? Maybe even GM will jump into the mix with a modern Blazer; there were rumors of a GMC-branded full-size Wrangler competitor– Jimmy, anyone? I’m 100% on board with the off-road world having a massive revival. But for now, I (and we) can only hope it actually happens.

[Blazer? Good one. We’re more likely to get a Jimmy, since Chevy went and turned the Blazer into a glorified crossover, a car with no semblance to the Blazer we loved other than a name. That was a misstep on their part. Maybe they’ll use K5? Wait…Kia just did that. Welp.]

Of course, all of the above is speculation and hopes and dreams at most. The Bronco may have been “confirmed,” but there have been rumors for so long now that I won’t believe it’s true until the first one rolls off the production line. Ford already has plenty of SUVs and CUVs; they would be doing themselves and the enthusiast market a huge deed if they made something that’s actually different, that harkens back to a sought-after nameplate, and that has the capability to match the macho looks. Oh, and of course there’s that whole part where they could compete with the Wrangler, but seems like nobody wants to take a stab at that– yet. When it comes down to it, it’ll be great to see a Bronco on sale once again. But what we want, and what Ford will likely sell, could vary greatly. Is there a chance that our wants and their sales needs will align? Your guess is as good as mine, but regardless, it’s nice to have Bronco name coming back. Time will tell if “Bronco” is a marketing gimmick or if it proves to be a true successor. Let’s hope for the latter. 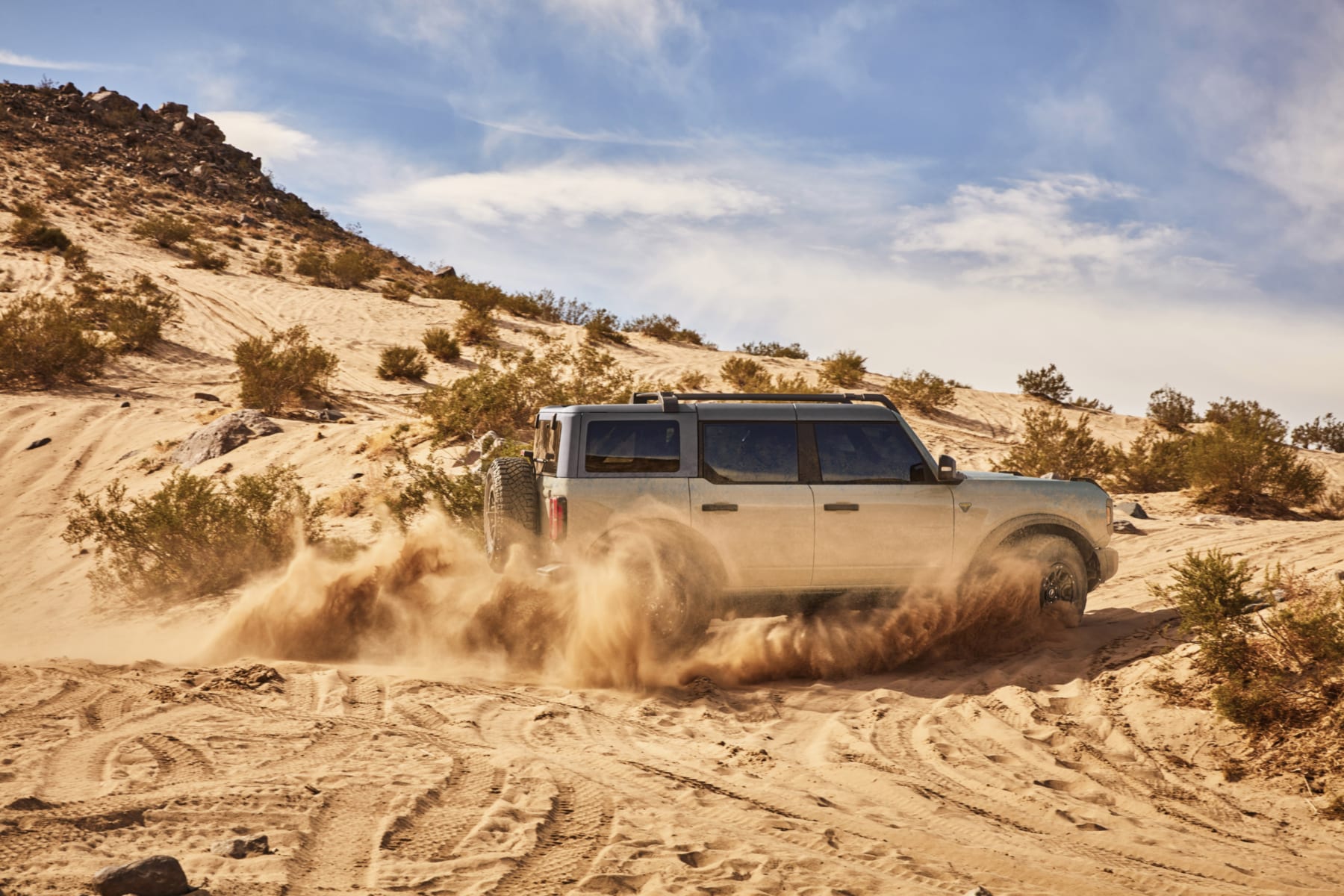 [We know the answer, and it’s largely good: Bronco is finally back. And though the Bronco Sport is mostly a Bronco in name the same way a Renegade is a Jeep in name to the die-hards only but so much so in practice, the real Bronco– the one with honest 4WD, proper off-road running gear, and the styling to evoke nostalgia with the best of them– is here and it looks promising. If 2016 me could have known the wait would deliver us with what we got, I’d have been content. Ford did well and the world took notice. Deservingly so.]