Search for a Family Camper: Is it Van Time?

The search for a new family-sized camping vehicle has lead us to the logical choices. There is no point discussing any more of the more interesting options (Delica, Pinzgauer, etc.) because this family camper will also have to double as the grocery-getter, sports transport, and dog mobile. The more exotic options are still enticing but will be harder to live with. That brings us to the Mercedes Sprinter and the Ford Transit.

Both vehicles are available in 4×4/all-wheel-drive (2020 Ford Transit) and rear-wheel-drive configurations. Both vans are available with a diesel engine. The 3.0L turbo V6 in the Sprinter makes 188 hp/325 lb-ft. The 3.2L inline five-cylinder in the Transit makes 185 hp/350 lb-ft. The comparison gets lopsided when you compare the gasoline engine options. The Transit’s best gas engine is the 3.5L twin-turbo EcoBoost V6 making 310 hp/400 lb-ft. The Sprinter’s gas engine is a 2.0L four-cylinder engine making 190 hp/258 lb-ft. The most common Transit engine is the 3.7L V6 that makes 275 hp/260 lb-ft.

Both vans were driven in the 12 passenger configuration. The Sprinter has the age-old two rows of three and one row of four in the back. The Transit has a more modern take with a row of three, then a row with a single seat near the door then two more seats across an aisle followed by the final row of four. We did not spend enough time to properly evaluate how the different row configurations would be used over time. All of the Sprinter’s rear seats have the ability to recline which is new for 2019. The Transit’s seats also recline but have in previous model years. 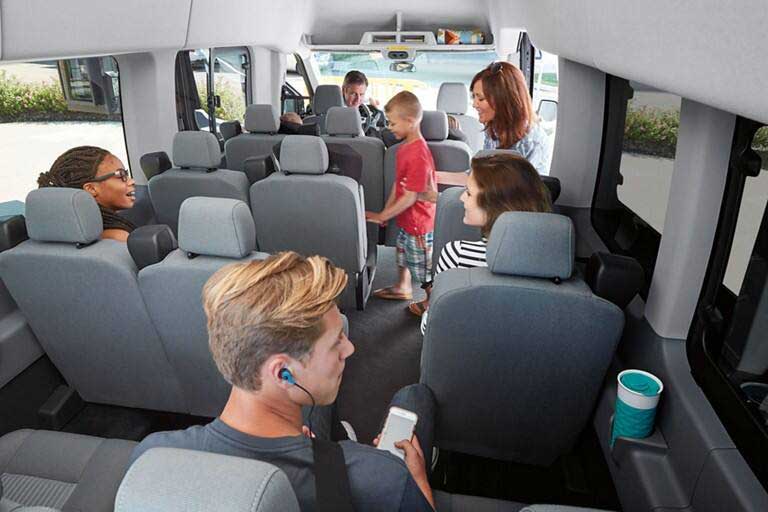 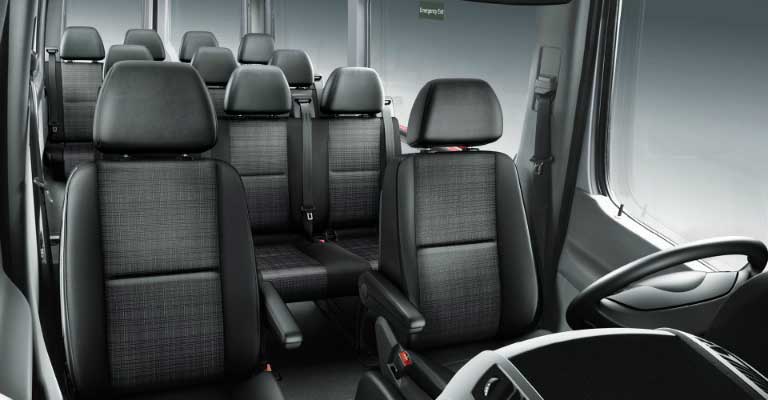 The question of cupholders came up. The Transit has standard cupholders in the rear, while in the Sprinter they are available as an option The Sprinter did have 4 USB charging points throughout the rows of seats. The Transit only had USB ports in the front. The 2020 Transit does offer FordPass Connect (4G LTE Wi-Fi hotspot) with AT&T that allows up to 10 devices to connect and USB in the rear.

I have driven full-size vans before. Numerous mission trips in Ford Econolines, family vacations in Chevy Express rentals, and one summer spent driving through Denver rush hour in a 15-passenger extended Dodge full of summer camp kids. I was looking forward to driving the Transit and the Sprinter. Overall, I was leaning towards the Transit. There are more of them available and maintenance/repairs will be cheaper as items break in the future.

The 2019 Sprinter 2500 144WB was my first experience in a Sprinter. I always enjoy a steering column that telescopes as well as tilts. This helped me achieve a comfortable driving position in the Sprinter. The driver’s seat was manual but had powered lumbar support. There was also a manual thigh extension. The driver’s position does not feel high, but it is. Seated in the Sprinter at a stoplight, I was able to look down into a Suburban. The driver of the Suburban was texting. I could almost read the texts. Even though you are seated high, the driving dynamics don’t feel top-heavy.

The Mercedes gear shifter is unique. Located on the right stock of the steering column, where most vehicles have the wiper controls. It was straight forward and easy to use, but required that I focused on what I was doing. It would be easy enough to adjust to owning a Sprinter.

The sound of the 3.0L V6 turbo diesel is there, but it is muted. There is almost no vibration to alert the driver that the engine is on. You’ll have to trust your gauges. I was frustrated when I turned on our 2013 Highlander after the test drive and immediately felt/heard our engine. The Sprinter’s powertrain was smooth and eager. The V6 diesel was ready to go. It felt fast compared to my 1994 Toyota Land Cruiser daily driver.

The Sprinter has some safety systems that account for its size: crosswind assist, blind-spot monitor, and lane departure warning. It was a windy day in Kansas on our test drive and the crosswind assist did activate. The system felt like it braked one wheel, which effectively caused the van to “lean into” the stiff breeze. The braking happened for a fraction of a second and normal driving returned. It is an interesting piece of tech. Kind of annoying, but if the alternative is being blown over, I would be able to put up with it. The blind spot monitor was helpful in changing lanes and I will always turn off the lane departure warning.

The 2018 Transit 350 XLT Medium Roof came equipped with the 3.5L EcoBoost V6. The first impression was how much lower the Transit seating position felt. The Transit has been described as being “car-like” to drive and it was exactly that. The driver’s seat could be raised and it still felt like a car. The Transit’s pedal box was smaller than the Sprinter. My left foot went to its natural position for me and was resting on the wheel well. The footrest next to it was located next to the brake pedal. I found the pedal box cramped and then my legs were cramped with my right knee resting against the gear selector. I’m tall (6’4”, 200 lbs) and had to adjust a couple of times to find the most comfortable seating position. I’m not sold on the Transit long haul comfort, but I definitely would like to find out.

The V6 twin-turbo engine was great in the Transit. It was more than eager. It was actually fast. You can watch Jeff’s review of this hot rod van engine on the Hooniverse YouTube channel. I can confirm that I had the same experience with that engine.

I was leaning towards the Transit heading into the two test drives. I’ve even toured the assembly plant. It’s almost in my backyard. My main takeaways were how smooth, solid, and refined the Sprinter felt. The Transit’s EcoBoost is fantastic, but the car-like seating position was not my favorite.

But money is still a factor and 2020 Transits are coming with an optional all-wheel-drive system. I definitely want to experience that before I would buy either one.