So far in this series, I’ve mocked several cars that people have relied on and loved in their lives, so now it’s time I turn the snark upon myself. In this installment of Lamest Classics, I’ll be the first to say it: I love Ford Escorts.

Yeah, the European Escort was actually cool in all kinds of ways and had incredible race provenance. I dig those too. But I have a deep, personal connection to the stupid, smoothed-over-rectangle North American Ford Escort that is only related to anything with an actual sporting pedigree in the longest reach possible. (Via its platform-friend Mazda 323 GTX and GT-R, if you’re curious.) 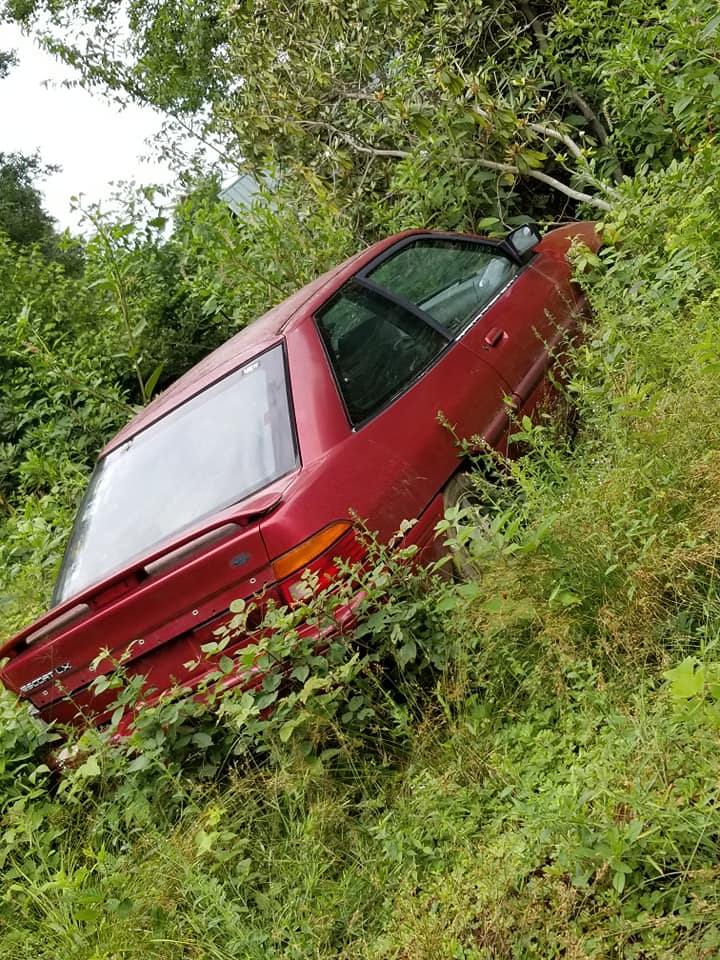 My first car was a 1991 Escort Pony — their highfalutin’ name for the stripped-out model — had the optional rear defrost, but no power steering, no a/c, not even an AM/FM stereo. Of course, I installed a stereo and fitted the doors with Sony Xplod speakers because it was around the year 2000 and those were the coolest-looking speakers on the shelf at Circuit City.

All Ponys (Ponies? How do you treat the plural of a proper noun where the regular-noun version is an irregular plural? Does that qualify as an irregular plural? My college girlfriend was an English major, but I studied journalism, so formal grammar is not my forte.) were 2-door hatchbacks. Mine had the 5-speed manual transmission and the standard-on-every-Escort-except-the-GT 1.9-liter engine. 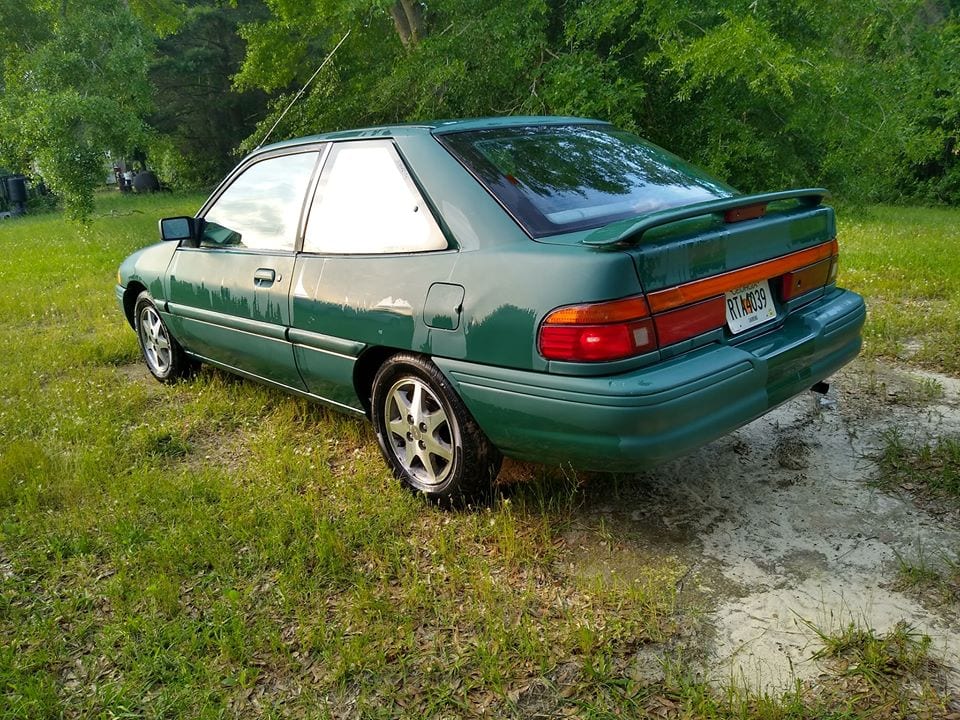 That SOHC motor made somewhere 88 horsepower, a far cry from the 127 horses you could get in the Mazda-sourced 1.8-liter in the GT. That’s practically a 40 horsepower difference, or a 44% improvement, from a smaller engine.

I loved to rev the piss out of that sad 1.9-liter, and it survived all my abuse. I also put 20w-50 Castrol Syntec oil in it, during an Illinois winter, because it was for race cars! And also because I was an idiot. By the time I sold that car for some 3-figure sum, it had fairly bad blow-by. But I realize now that it wasn’t exactly a smooth-running motor. 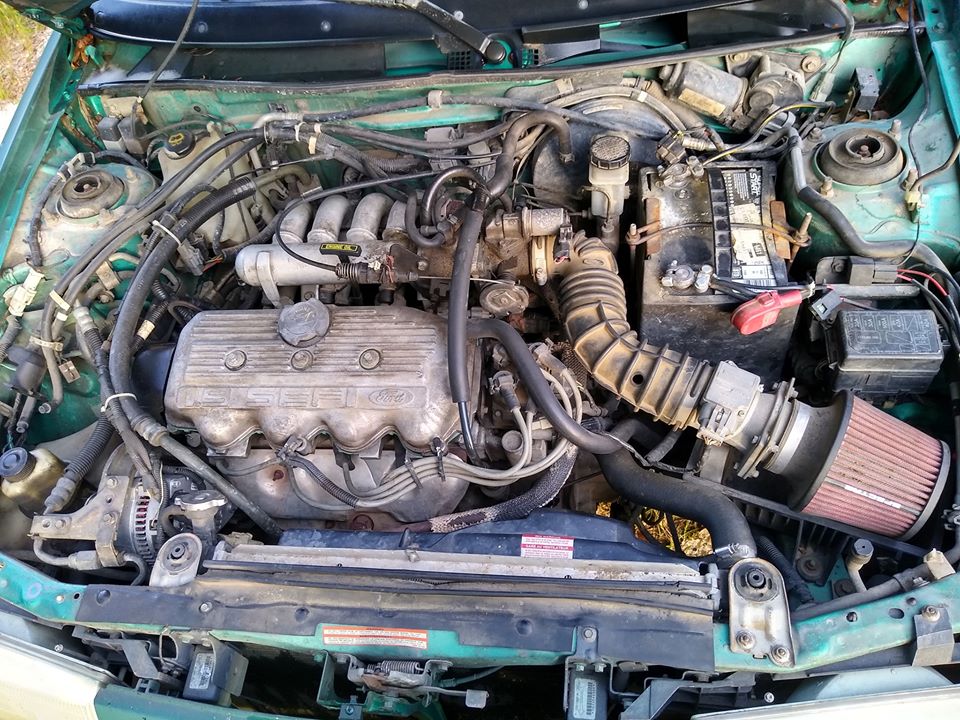 It had enough torque, but the power went flat shortly after 4,000 rpm. It was a slight update on Ford’s CVH engine that dated back to the early ‘80s and came in sizes ranging from 1.1 liters to the last-generation Escort’s 2.0 liters.

I’ve heard some enthusiasts say that CVH stands for “considerable vibration and harshness,” which is fair, but it’s actually a stupid abbreviation for Compound Valve angle Hemispherical combustion chamber. I don’t know why Ford chose to ignore all those other words. Maybe it would’ve cost too much in ink to print CVAHCC on their marketing materials.

Maybe they should’ve just come up with an actual name. 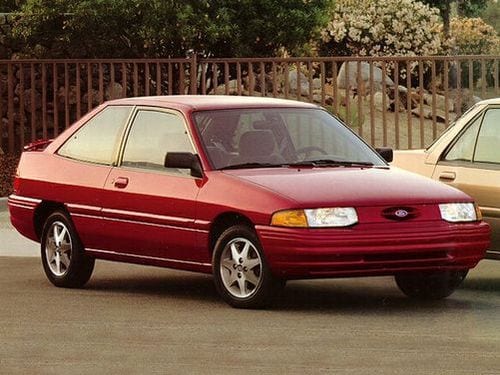 Ford had about a 25 percent stake in Mazda from the early ‘70s, so it’s a little weird to me that they decided to make their own car when creating the North American front-wheel-drive Escort rather than borrowing the good-little-car GLC from its Japanese partner. The first-generation Escort was a bestselling piece of all-American garbage. 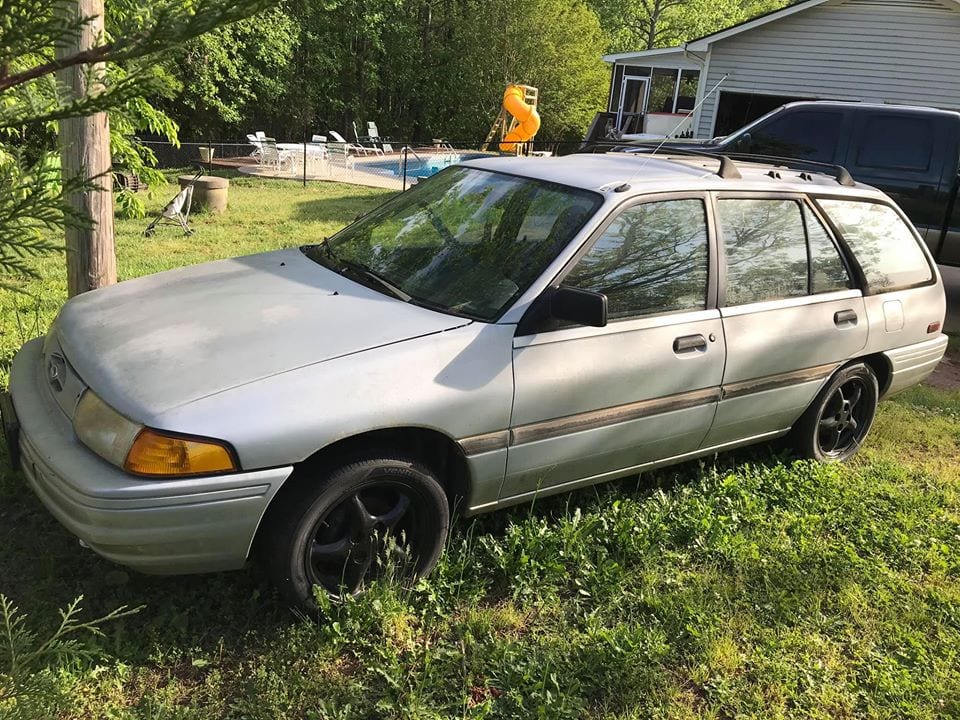 The second-generation Escort, introduced in 1991, was in its last year in 1995. It was built on Mazda’s BG platform, shared with the 323 and Protege — a descendant of the GLC.

Even by 1995, Mazda had moved its Protege to a newer variation of the platform, dubbed BH, but Ford kept the Escort chugging along on the same old BG until they dropped the name in 2003.

Still, this meant it had independent suspension all around, with better geometry than the older Escorts. In fact, all the good stuff in the Escort was Mazda’s. The bad stuff — the engine, and the stupid self-retracting seat belts — was Ford’s. 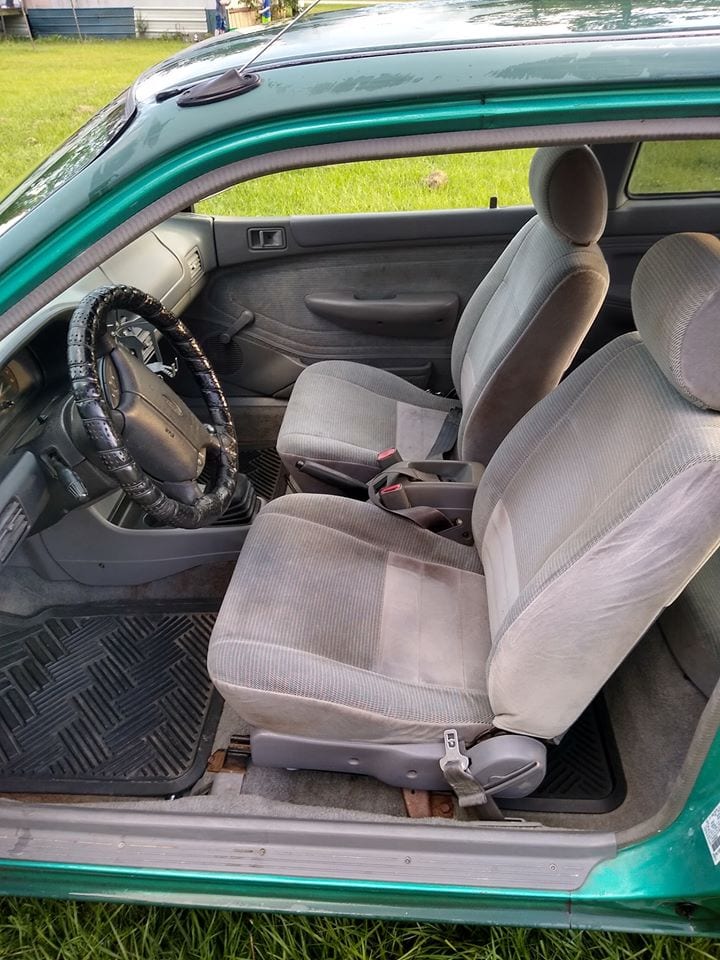 Those annoying seat belts counted as a “passive restraint,” which allowed manufacturers to skip the airbag mandate, but 1995 was a fun year where the exemption ended but it would’ve cost too much for Ford to redo the seat belts. So you get the benefit of air bags and the annoyance/novelty of motorized passive belts at the same time. 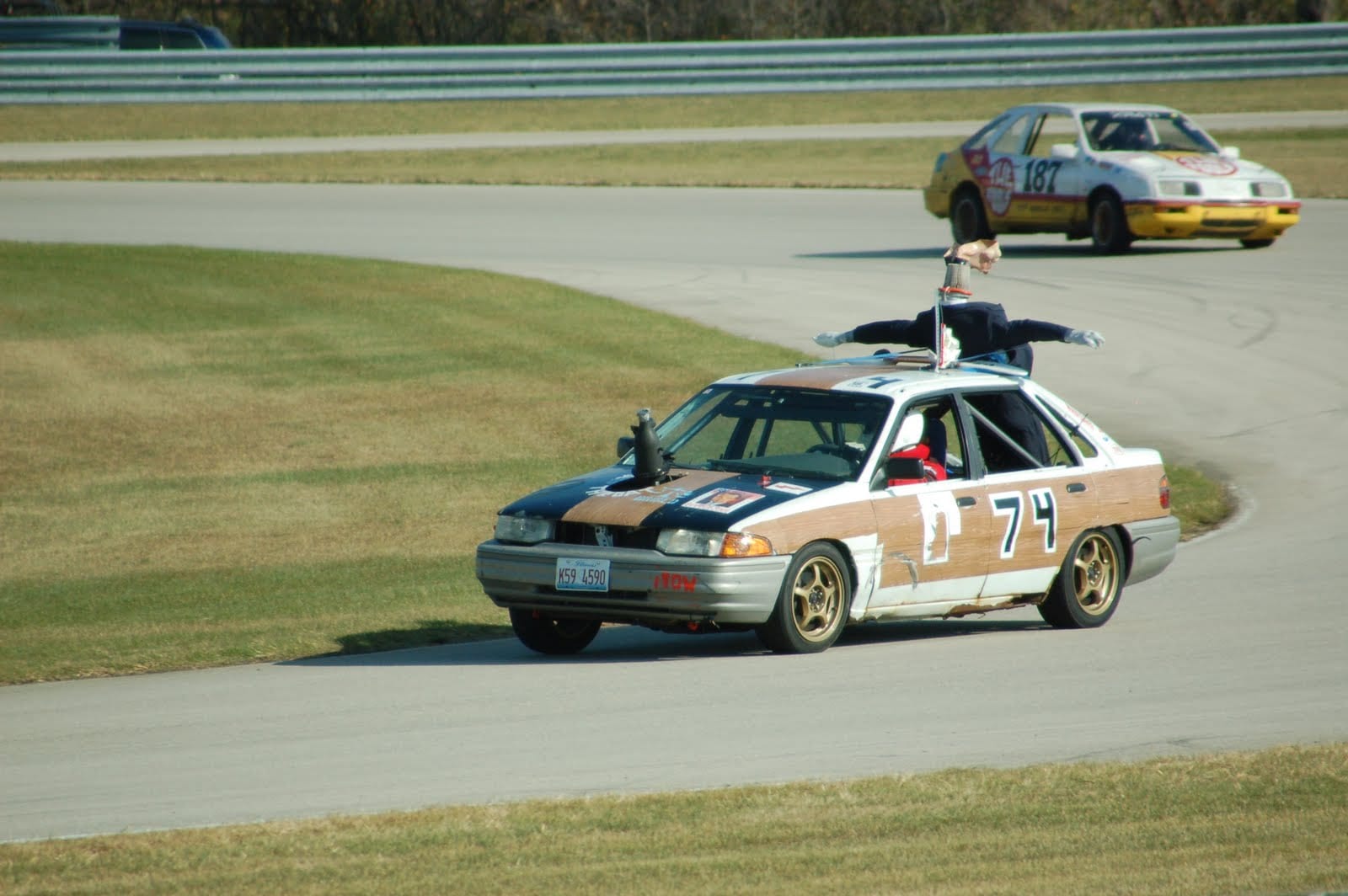 After owning a handful, it was a natural choice for me when building my first Lemons race car. These cars handle remarkably well and have phenomenal brakes. If you use either the Mazda engine or the later Zetec from the Escort ZX2, they can do pretty well.

But we’re not here to talk good (I told you: not an English major.), we’re here to talk lame. This means my official recommendation is to get yourself a CVH-equipped Escort but find a manual transmission. 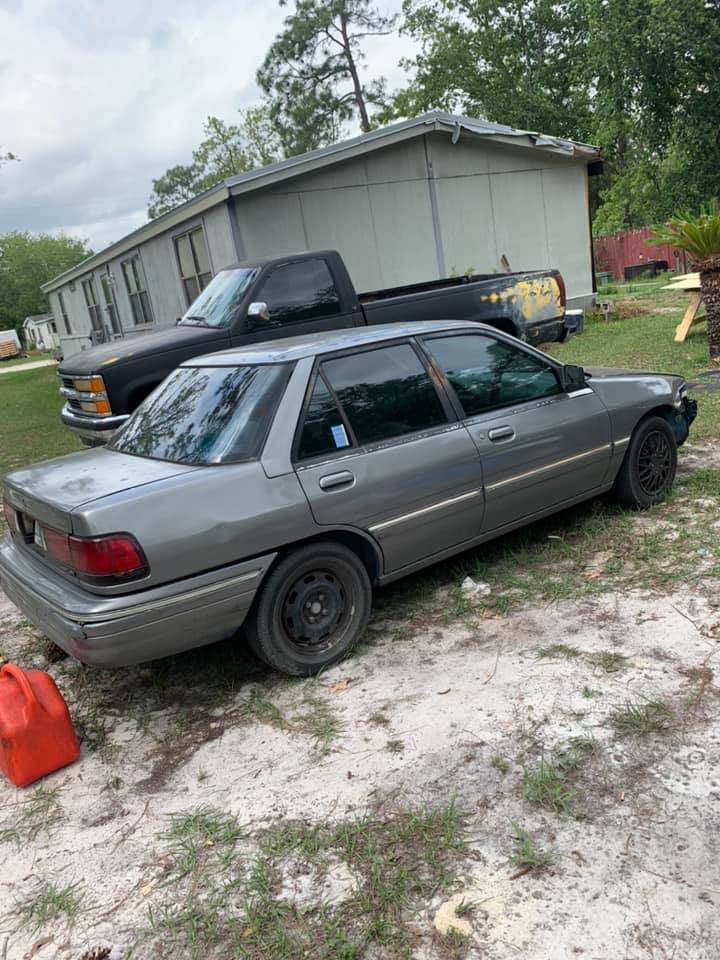 Nobody will be interested in that ’90s econobox with 14-inch alloy wheels, regardless if you slap those classic-car plates on a 2- or 4-door hatchback, sedan, or station wagon. They’ll care even less if you get its Mercury Tracer sibling that I always forget about.

Shit. I should’ve written this whole damn thing about the Tracer.