A few days into my time with a 2020 Wrangler Unlimited Rubicon and I was falling for it. The charm alone was enough. Better yet, the Jeep was proving to be a comfortable, enjoyable road-trip companion in ways I hadn’t expected. And as we rounded the corner on our time with the JLUR, we finally had the chance to hit the dirt.

[Disclosure: Jeep was extremely kind and loaned me a 2020 Wrangler Unlimited Rubicon for a week. I returned it only slightly dirty.]

The trip that almost didn’t happen was, thankfully, happening. Just days prior, Tropical Storm Isaias struck the eastern seaboard. Widespread power outages swept the region. The damage was extensive. Trees littered roadways, flooding ran rampant. Wharton State Forest, our off-pavement destination, fared similarly. Rendered unsafe for visitor travel, the park was closed indefinitely. Power was soon restored to the island and we felt elated to actually get away. But I still felt some sadness over our one chance at off-roading the amazing Wrangler Unlimited Rubicon seemingly being squashed.

Luckily, as was the case with much of the trip, that was unfounded. On Sunday the park’s page announced its reopening. A free Monday ahead of us, we pointed the Jeep’s nose west for an opportunity to explore some local backroads. And, as I was so eager, to drive it in the sand and dirt.

The Pine Barrens is a New Jersey state park famous for towering pine trees, sandy roads, and an appearance in The Sopranos. It’s a gorgeous, sprawling piece of property that provides the opportunity for exploration throughout an expansive chunk of woods. We didn’t see any bodies being buried while there, but we did play around on some trails.

Starting in two-wheel-drive on a fire road, we blasted along at 30 MPH with the traction control off. Ford’s Raptor might be the king of these antics but the Wrangler fares pretty darn well. That’s without having aired down the tires, too. The ride over bumps, ruts, and small ditches was admirable. And, crucially, supremely easy to control. Twenty, even ten years ago a Wrangler with this much capability would be a handful, at best. Jeep prides the Rubicon trim, their most trail-ready, as being accessible to everyone. It’s for weathered off-road pros pining to take advantage of its features and push the truck to its limits. And it’s for novices, to get out and explore with backup contingencies in place should a problem arise.

Like foolishly nearly getting your press loaner stuck. We rounded a picture-perfect, banked ninety-degree uphill turn and I parked the Jeep to snap a picture. I hopped in and, as most of us would do, punched it. It was the perfect storm: Far too much pressure in the tires, said tires sitting on extremely soft sand still wet from the recent storm, traction control off, the Jeep still in two-wheel-drive… I can make all the excuses in the world, but you can guess the rest. Despite my right foot’s prodding, the Dana rear axle dug down to its housing. Nobody’s fault but my own. My wife looked at me and shook her head, the rate of which only quickened by my manic laughing.

No need to worry: This Jeep has all the off-road toys.

Engage the gadgets: Four-low and both differentials locked, the Jeep crawled out comically easily. Zero wheelspin, zero drama whatsoever. Truthfully, it could have dug itself out using basic four-wheel-drive. But what fun is that? 4×4 merits are nothing if not there to be used.

From there it was four-high with the sway bars disconnected for maximum comfort as the rolled-back roof provided a grand view of the sky above. I love the Toyota 4Runner but this was another level of confidence and fun for off-roading in an SUV. Washed-out incline? Piece of cake. Mud puddles? Don’t stand a chance. The Jeep was laughably undertaxed by what I threw at it After about 20 miles of dirt, sand, and pine, we re-entered the highway, the Jeep acting as if we had never left the tarmac. If that’s not the essence of wheeling luxury, I don’t know what is.

Oh, wait, I do: Driving it through an automated car wash. In the past, this was a big no-no for a Wrangler, especially one laden with canvas anywhere near its roll bar. FCA’s rep said go for it, so I did. Status report: No leaks, just a less-filthy Jeep. Now that’s luxury.

So maybe we didn’t off-road it anywhere near its limits. We did, however, use it the way most owners will: Everyday use, road-tripping, and enjoying the so-called “freedom” that the Wrangler brand promotes. Like going straight from commuting to a beach trip directly to the trails and then directly home. It’s an impressive feat to be able to manage this unscathed. And though the Wrangler Unlimited Rubicon isn’t the only vehicle out there that could do what we did, the Jeep made it exciting, made it feel like an adventure. That’s irreplaceable.

As my week with the Wrangler Unlimited ended I reflected on the model and how far it’s come in my lifetime. I have an emotional attachment to Jeeps. I grew up around them. YJs, XJs, ZJs, and so on. My parents, out of my 29 years of life, have been sans-Jeep only nine of those years. (They love their WK2 Limited with the 5.7L V8). As one would expect, the most exciting of these left the lasting, strongest impression. My dad’s Bright Red 1989 Wrangler was largely responsible for my automotive path. So with YJ memories still fond in my heart, it was with serious weight that I pondered how far the model has come. 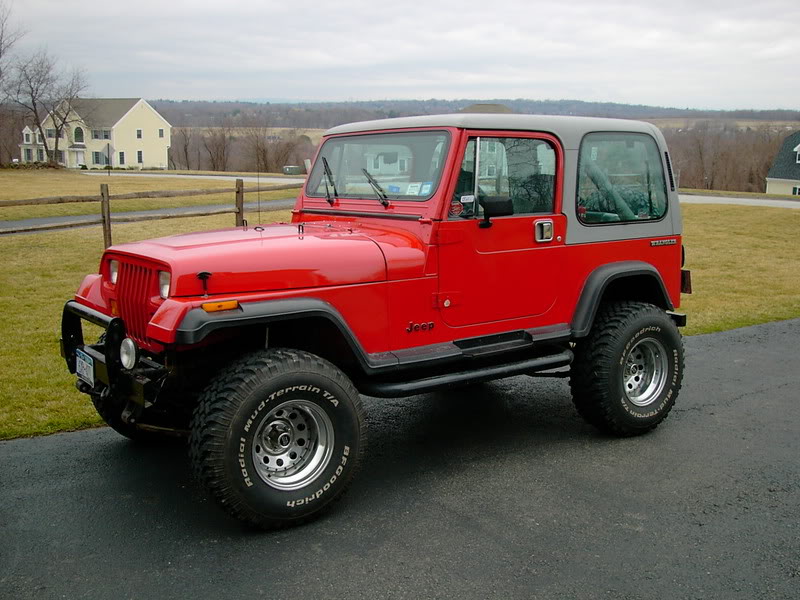 The JL’s interior isn’t just nice for a Jeep; it’s just nice, full stop. Of course, it’s kitted to the gills as-is. The materials are good, the tech fantastic, etc. Power (and cooled) seats should be present given the price tag but all-in-all it’s comfortable, well-appointed, and assembled beautifully compared to past standards. The interior feels modern and decidedly charismatic given the style that’s simultaneously familiar and fresh. A good thing, considering it’s already three years into the model cycle. During that time we’ve seen more luxury options become available, making it easier than ever to send the MSRP to the sky. The numbers get scary. It’s all relative.

Adjusted for inflation, my dad’s 1989 Wrangler stickered at ~$29k in 2020 dollars. That much buys a bare-bones JL Sport. Optionless compared to this tester yet loaded with features compared to the YJ. Air conditioning was an option in 1989 (…and still is on base models). As was the passenger seat. The 2020’s heated leather seats would put the ‘89’s vinyls to shame, and a heated steering wheel? You couldn’t have wished for it. Then there’s the Sky One-Touch Power Top which retracts in less time than how long it took you to swear at the YJ’s complexity before even turning the first bolt. And there are LED headlights and taillights, radar cruise control, a digital dash, and an Alpine stereo with an amazing touchscreen.

The drivetrain and running gear mark the second diversion from the Jeep I knew as a kid. The ‘89 had a carbureted 4.2-liter straight-six mated to a five-speed manual transmission. The Rubicon Unlimited provided for this test came with a two-liter turbocharged four-cylinder. When the YJ was out, turbos were reserved for Grand Nationals. And the F40. My only minor nit to pick here is that the four-cylinder’s turbocharger occasionally surges at the wrong time. It’s not the perfect engine for the Wrangler. Nor is the current Pentastar V6. Maybe the 392 will be. The JLUR gets an eight-speed automatic transmission, an electronically detachable front sway bar, and locking differentials both front and rear. All of which are there at the tug of a lever or push of a button.

Most owners aren’t going to use any of this. Buyers simply want to look the part. They want something that’s not a CUV but is still livable. Something different. And so, we live in the world of Jeep Wranglers spec’d like this one, the sticker price for which was a hair shy of $60k. Is it weird that we’re used to this? And does it make sense at $60k? I asked myself these questions dozens of times during my loan. Inflation is a factor in the price of course, but at this number, the Wrangler provides an experience that can’t be found elsewhere. And that’s certainly worth something. The tech is good, too. And the off-road competence is unbeatable. So, yes: I’m convinced it indeed makes sense.

More importantly, is that it’ll have the same effect on potential owners. After decades of the Wrangler being “almost daily-capable,” it’s finally there. There’s a reason it’s selling so well and can go toe-to-toe with the likes of the 4Runner. And being that most (read: nearly all) Wrangler owners will never touch dirt, let alone lock the differentials, it’s every bit as good as it needs to be.

Turns out, the Jeep I knew and loved was probably an awful vehicle. Actually, I know it was; my dad reminds me of that regularly. When the JK was in its last stretch, I wrote a sequence of articles called What Jeep needs to get right with the JL Wrangler. A new Wrangler is important to me. I grew up with the brand and their vehicles are largely responsible not only for my love of all things automotive but for my obsession with all things off-road. I’ve spent my life in the four-wheel-drive community on ATVs and in Toyota 4x4s, and even started a podcast about off-roading. To say there was some buildup in my mind as to how good the JL needed to be would be a grand understatement. And to say Jeep delivered would be equally so.

The JL is the real deal, a Wrangler finally ready for the real world and not just weekend toy duty. It’s comfortable, compliant, and, of course, capable of out-wheeling effectively any stock vehicle that can be driven off a showroom floor. Sixty thousand dollars is a big number, but the JL Wrangler Unlimited Rubicon is worth every penny. I was concerned that the brand I fell in love with as a kid was going to divert far from its roots, stray too far off its own beaten path. Those worries were fully unfounded. The Jeep Wrangler Unlimited Rubicon is everything I wanted it to be. And more.