This past weekend was the first major iRacing Special Event of the year, the iRacing 24 Hours of Daytona. I unfortunately had to sit this one out, but my friends and teammates at TURN Racing Sim Tools eSports drove four cars to the finish and all posted stellar results. If you have no idea what I’m talking about and this all sounds like some millennial nonsense to you, read the team introduction post here.

It was the first major race for our newly structured team and the first time we’ve been able to run Daytona together. Fourteen drivers split amongst four cars registered for the race and all of them finished within the top 10 of their class. Even in a simulator, finishing this race is an accomplishment alone. That’s 24 hours of managing traffic in a large field, avoiding wrecks, and running a good strategy to not fall behind over an ~800 lap race. We’re all incredibly pleased to have finished as well as we did. One team in particular though finished just a little higher than the others… 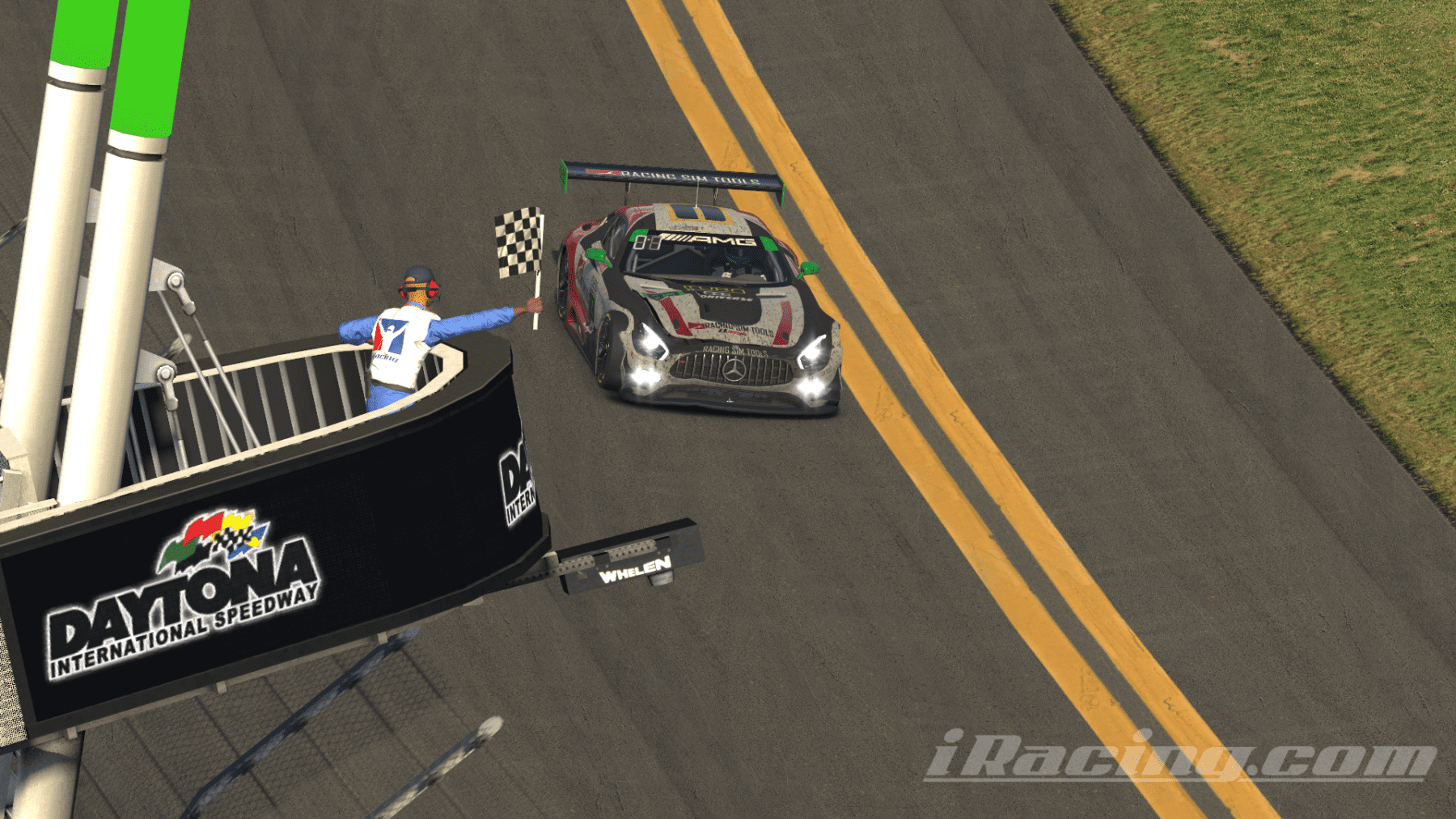 Driving the TURN Racing Sim Tools Black Mercedes-AMG GT3 [we use colors to differentiate each TRST driver squad] to a first place finish was Mike Henry Jr (NJ), Jamen Winters (MI), and Alexander Gerber (DE). They qualified fifth out of a nineteen-car GT3 field. Their race had a rough start though as they fell a lap down to sixteenth place due to a mishap in the first pit stop… which I’m told was pretty hilarious. For the remainder of the race, they relied on clean, fast, and consistent laps and tire strategy. iRacing changes tires separately from refueling service for GT3 (and GTE) cars so strategy matters here. They knew they could start double-stinting tires early. Turns out they could double stint much earlier than everyone else. That was good for about a 30-second advantage every other pit stop.

They made it back to P1 during the night and held it till the morning till they were collected in an accident and fell to second. They once again had to battle back to first place with the fastest times they could manage – which were the fastest times in their class, despite some irreparable body damage (#JustiRacingThings). This time they were able to hold P1 all the way till the end and crossed the line with a one lap advantage over second place. They collected the team’s second iRacing Special Events win and first 24-hour win.

Our other Mercedes-AMG GT3 team was TURN Racing Sim Tools Yellow with Robert Elder (FL), Zachary Hefner (OH), and Andrew Adamson (MD). They made it to the highest “split” of anyone on the team, meaning they were with faster drivers (because they were also fast, of course). That was certainly the case with this crew who had one of the fastest average lap times of the class. They started ninth and slowly crawled their way to the front by prioritizing lap times over conserving to double-stint the tires. Their pace was able to make up for the difference and then some. Unfortunately, a miscalculation on fuel robbed them of a podium. They came home in fourth place with their virtual helmets held high. They also ran more laps than any of us during their race at 814 laps completed.

GTE Results for the Team Grey and Red 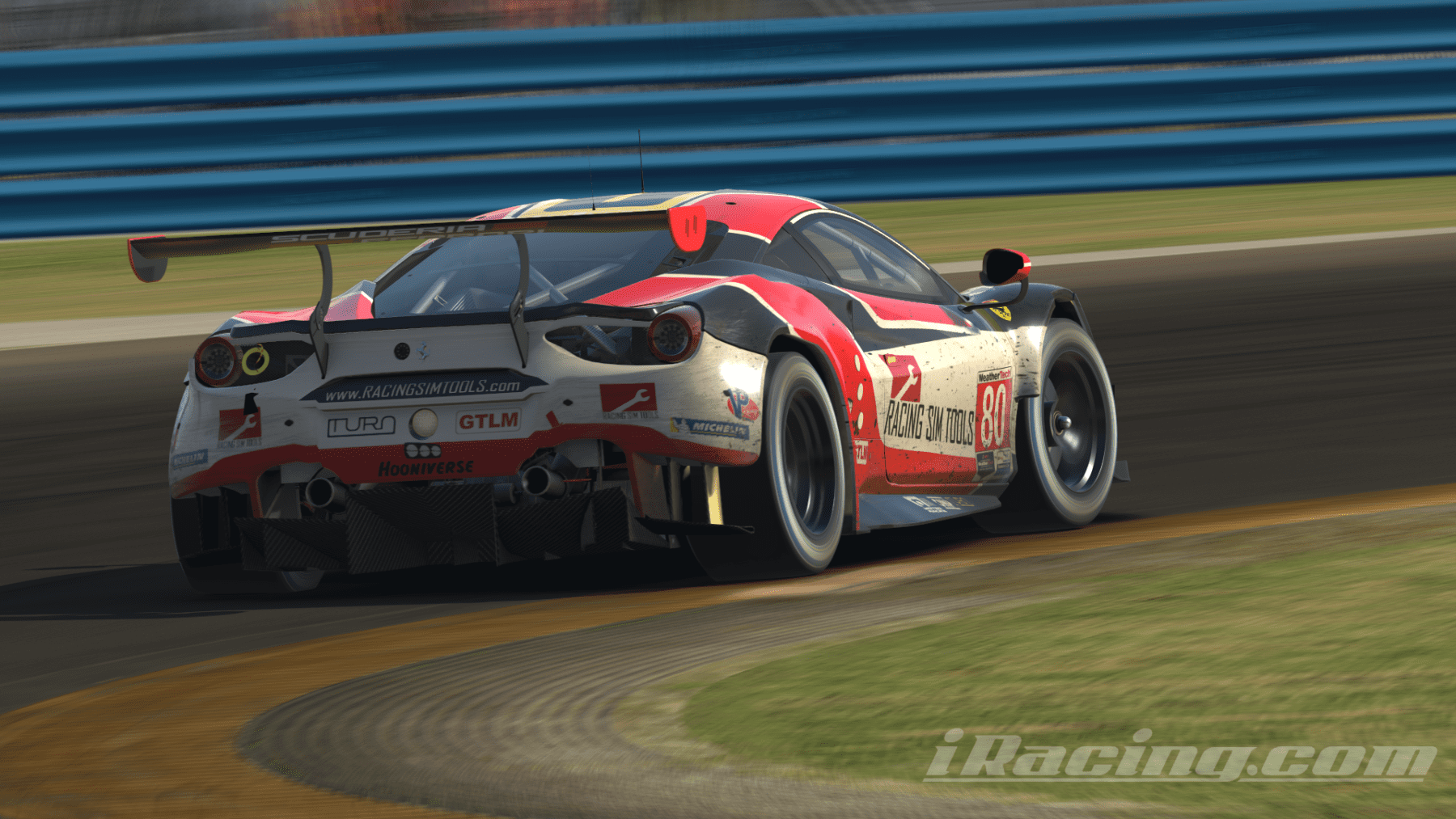 The first of our GTE teams was TURN Racing Sim Tools Grey with Jeffrey Aroyan (FL), Abram Wozniak (VA), Jesse Olsen (GA), and Geoff Holbein (MI) who piloted their Ferrari 488 GTE to a seventh-place finish in an all-GTE split. A total of 54 GTE cars were in their class and they had to start way at the back after an off-track invalidated their only competitive qualifying lap. Way to go, Abe. They responded quickly and aggressively from 51st on the grid. They too were the first to triple stint tires which helped catapult them to the front of the field in a fight for the podium. From 51st place. Sadly, driver fatigue and some back luck sent them into the wall with minor damage that was just bad enough for them to lose speed. They had to settle for a seventh-place finish. Again, from 51st!

Finally, TURN Racing Sim Tools Red in their Ferrari 488 GTE finished tenth in another all-GTE split with 54 cars registered. Donald Greathouse (OK), Jason Wray (TX), Zachary Etier (AZ), and Dustin Rand (PA) qualified a respectable fifteenth and also had a little bit of a rough start after another issue in the pits early on. Recovery drives seem to be what we all excel at. They were consistent and smart with their strategy (also triple stinting tires before everyone else) and worked their way back up in no time. They had a comfortable gap to the cars behind but were just out of reach for anything higher. But still, tenth place in a field of 54 cars is no small feat. 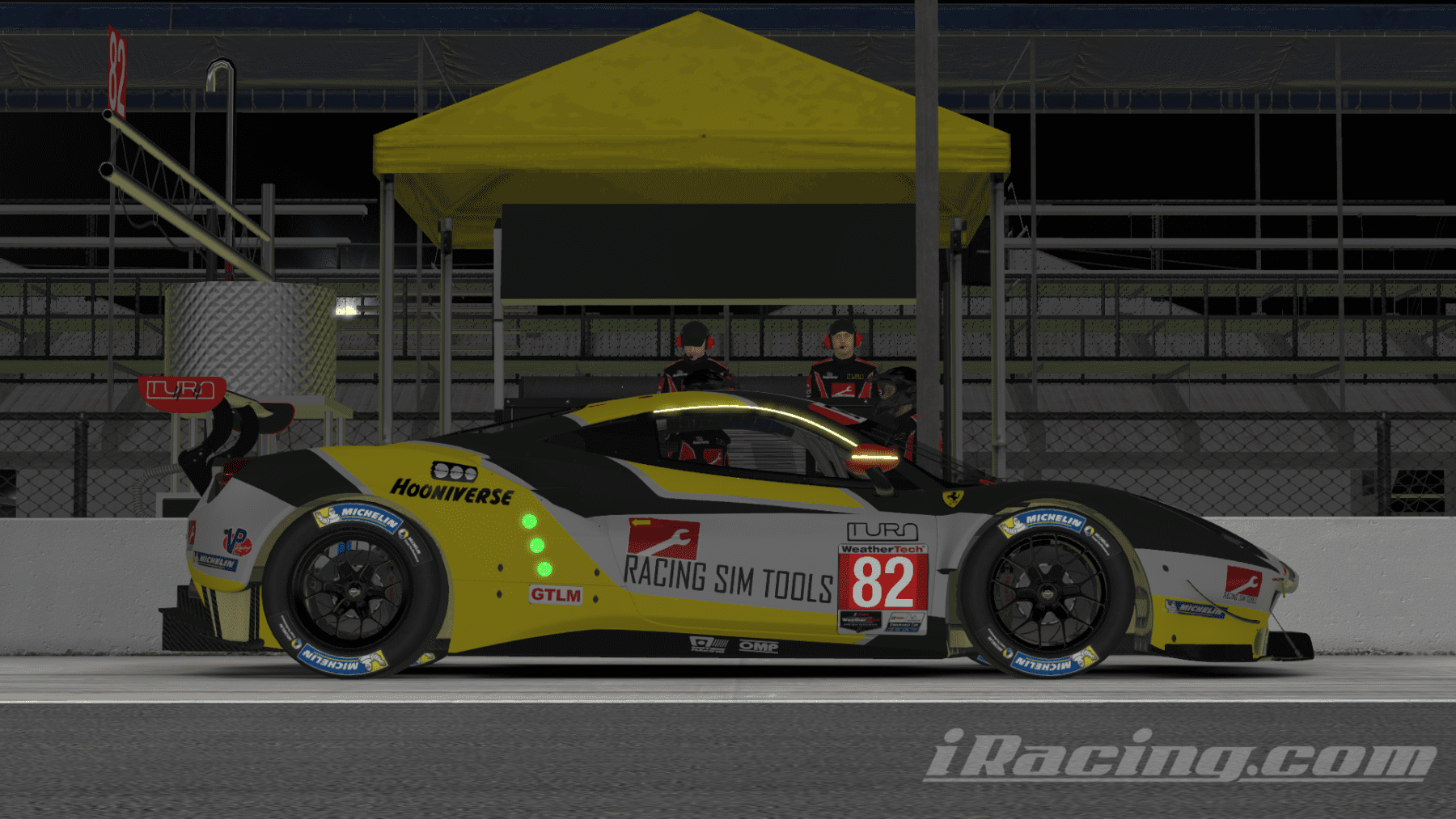 This team has existed in some form for just under a year now, but this past weekend we were bigger and more structured than ever before as a pretend racing team. We ran more practice laps, collected more telemetry, and created more setups than any other race we’ve done so far. We knew how the cars would behave during a double or triple stint on the same tires because we drove those stints in practice.

Not only that, our cars were hooked up and were consistently running some of the fastest times in each respective split. Thanks to input from Racing Sim Tools and all the drivers who tested each one, nobody was left wanting more out of their car. Many of us that couldn’t make the race, myself included, still ran hours of practice for the greater good of the team. It’s that kind of team spirit that makes the hours spent on fake race cars seem all so real and so rewarding when the hard work pays off.

Most of the team is taking a well-deserved break until the 12 Hours of Sebring in March. Some guys though just haven’t tortured enough and are already practicing for the Bathurst 12 Hour on February 8th. I’ll keep you posted as those dates get closer. Thanks for following along.