Racing simulators have been around in some form for decades but their popularity has exploded in recent years. eSports in general has turned into a massive industry and competitive sim racing is a scene that’s been growing along with it. The videos can garner hundreds of thousands of views on YouTube, steamers attract thousands of live viewers on Twitch, and real-life sponsorship deals  from big companies are getting more common. And iRacing, one of the most popular racing sims on the market that has helped fuel this trend, celebrated 100,000 active members last month. It’s about time Hooniverse got in on some of the action. So we are.

You may not recognize the name but you’ll recognize the team – it’s the same group of guys I ran last year’s iRacing 12 Hours of Sebring with but with some new additions and team changes. A month or two after our first race together as a team, we started recruiting more friends to join in on the fun as we ran the rest of the iRacing special events calendar that year. And along the way we even picked up some sponsors, one of which is none other than Hooniverse – after all, I race with them too. 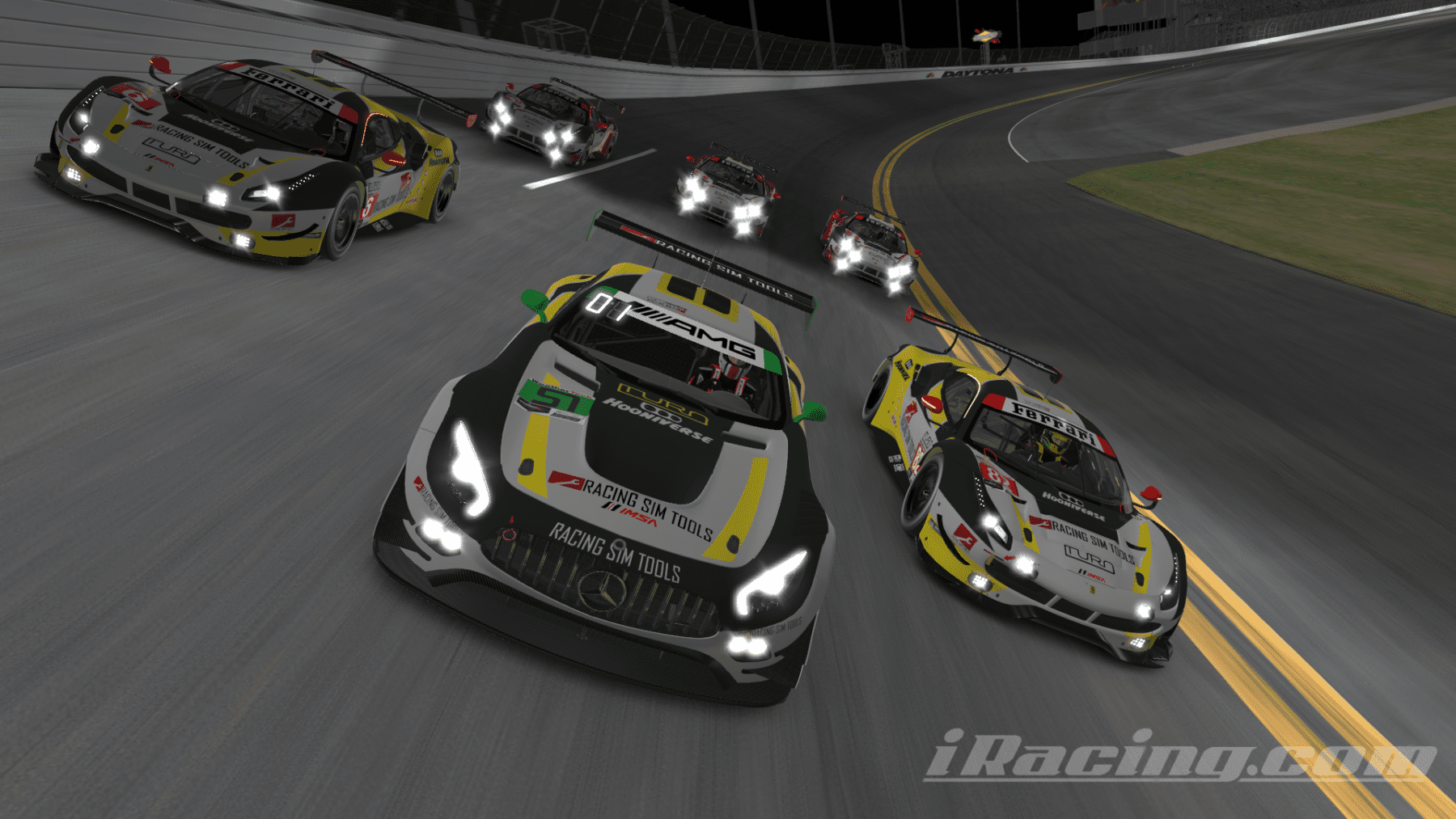 We’re a team of passionate sim racers of all different skill levels and backgrounds but with a primary focus on endurance racing. We all came from a few different teams and gaming forums that came together through the “Sim Racing Lounge” Discord server, whose banner we ran under for Sebring last year. Since then we’ve become a bit more organized and surged in members up to about 30 drivers. At the end of the day we’re all in this for the fun of racing with friends, but we aimed to take it just a little more seriously after we got the attention of a mutual friend who was looking to increase their involvement in the iRacing community. More on that later.

Throughout the rest of 2019, we continued to push ourselves in each special event and regular-season endurance race. Some of us joined unofficial leagues with weekly races that were broadcast on the iRacing eSports Network and We learned off each other and got better as fake racers together. We then started taking on various roles to make things more streamlined. Some will create/test setups and gather telemetry and others analyze that data. We also have guys in charge of making liveries for cars we drive. They even assigned me the role of “team media guy” which I take at least somewhat seriously. Sometimes. In short time, we started to almost function like a real [fake] race team.

It’s easy to make a hobby feel like a job as so many fall victim too. But so far we’ve only found more enjoyment out of being more involved in this little team of ours. As mentioned, we’re just in it purely for fun. We’re doing so by operating as close to a real team as is possible in a sim. 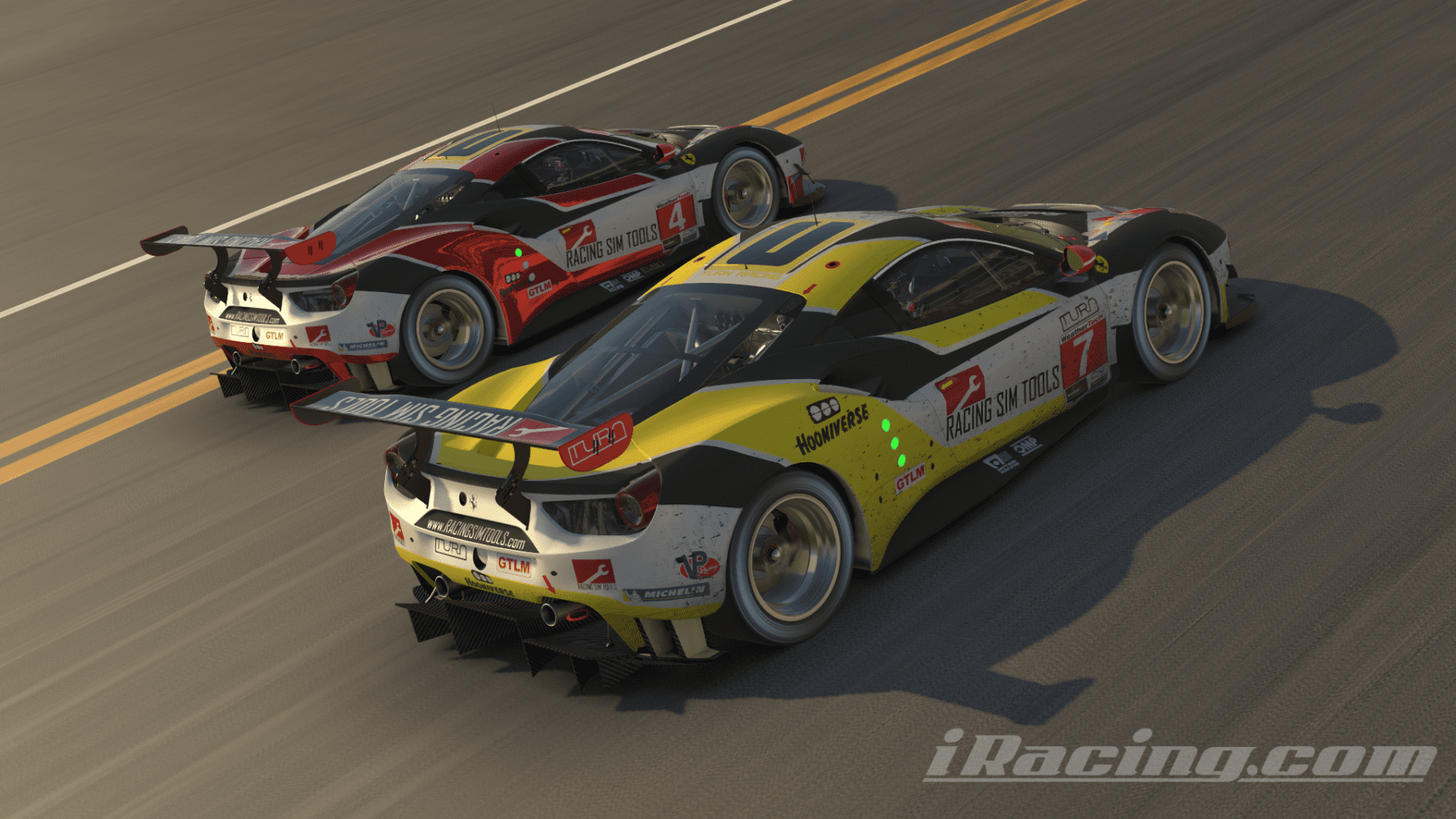 For real! We got our first taste of sponsorship with a friend of the team brought on Racing Sim Tools. Their offering is a powerful sim racing telemetry application that can make both car and driver faster with data. We were thrilled to have them on board as our first title sponsor and we soon underwent a major re-branding. All cars got beautiful new liveries made in-house and our team name changed to Racing Sim Tools eSports. We ran several big races under the RST banner, got on a few broadcasts, scored a few special event podiums, and even won something sponsored by another big name over the summer (which I’ve been meaning to talk about… soon). To say RST’s software played a big role in that early success is a massive understatement.

One sponsor turned into two in autumn as TURN Racing, a producer of ridiculously-high-quality racing wheels run by another mutual friend of the team, joined and allowed us to put their logos on our cars. Around the same time we added Hooniverse to the car as a third sponsor due to my affiliation. In well under a year, our new team suddenly had three brands represented on our cars. Real or not, that felt pretty damn cool.

And in the case of TURN Racing, they recently increased their team involvement and become our second title sponsor. Initially we just ran their logos because we were fans, but now we’re their official eSports team too. Thus our name changed again to what it is now – TURN Racing Sim Tools eSports.

Hooniverse is becoming involved by… well, me. Because I’ll be driving right along with the team (most of the time), you’ll occasionally see race recaps and other announcements from us as long as you keep reading them. I’ll be reporting from the point of view as a team driver/sometimes media guy which I hope you’ll find at least somewhat entertaining.

Our main focus is on the iRacing Special Events that they run throughout the year. These are mostly endurance races like the 12 Hours of Sebring, the Bathurst 1000, 24 Hours of Le Mans, and others. Those are the events we live for, the reasons for which are broken down in my coverage of Sebring last year. But we also do other regular-season endurance races, daily sprint races, and weekly league racing. A handful of us stream the races so you can watch live. And sometimes you’ll be able to watch us in one of iRacing’s broadcasts if we’re special enough.

I’ll make an announcement with links to follow the team any time we’re about to run a big event. Sometime after the race I’ll be providing a short recap, especially if we end up doing well. 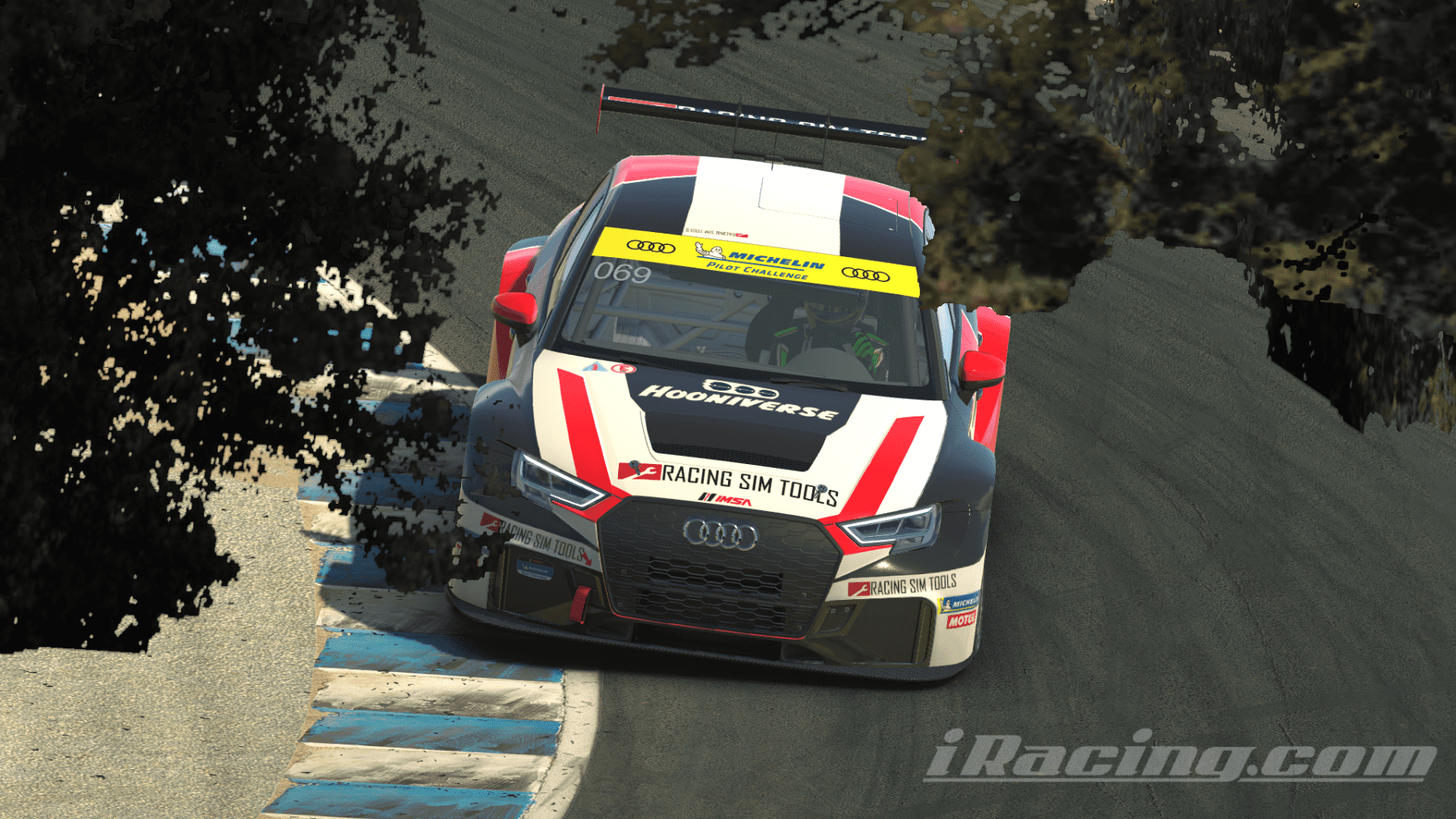 For starters, you can follow our new Twitter feed for schedules and in-race updates. Those of us who are bothering to set up legit streams (so not me) will be broadcasting the races for us from our perspective. That includes our fastest drivers Hef and Andrew, as well as our team manager Abe, and average drivers (just like me) Donald and Jason. Each account should also have recent videos saved so you can check the clips and see our past races.

Our next race will be this weekend, actually.

iRacing’s Rolex 24 Hours at Daytona starts Saturday and four of our cars are entering. The links above (except Andrew’s stream) will all be active during the race. We don’t expect you to watch the whole thing but would love if you popped in occasionally. The chat rooms are open too. 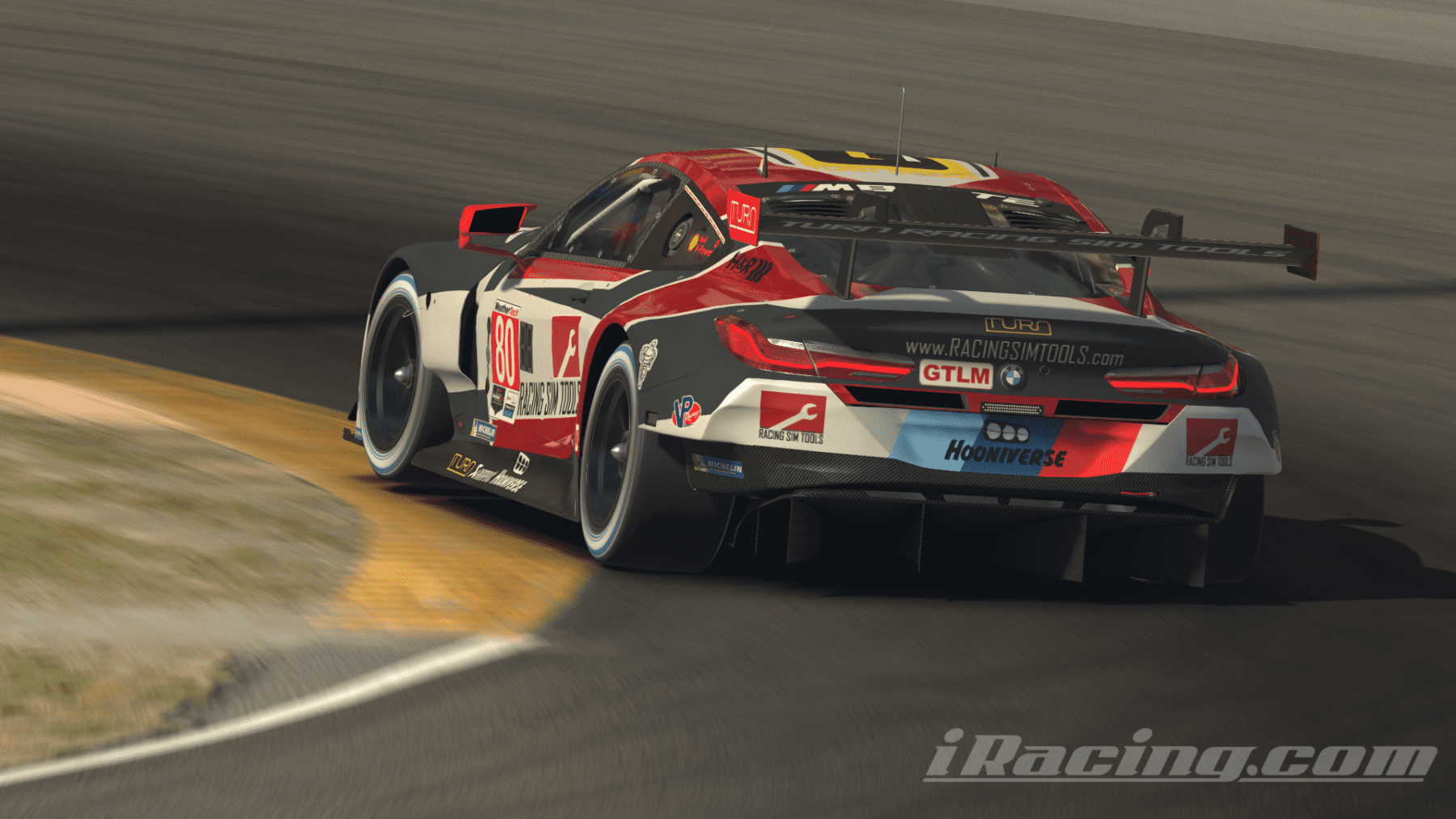 My goal with this coverage is to give you an insider’s view into a sort-of legit iRacing eSports team. I want to show how dedicated we are and why we all enjoy it so much. Furthermore, I want to show why it’s worth this kind of time and effort. Sim racers are often the butt of a joke from lots of real drivers and others in the racing industry. However, far more embrace it as a legitimate training tool and a grass roots entry into the sport. Dale Jr. is a huge supporter and is often found on iRacing along with numerous professionals, like Nicki Thiim, Tommy Milner, Nicky Catsburg, Nick Tandy, Jordan Taylor, and pretty much every NASCAR driver.

On the other end of the spectrum you have Brian Keselowski, the far less successful of the Keselowski brothers, who likened us to school shooters in the most “OK boomer” tweet of the year so far. I guess you could say sim racers are an easily misunderstood bunch.

Few can afford a seat in a real race car for a weekend, but more can find at least a somewhat similar level of enjoyment without nearly as much risk for a $10/month iRacing subscription – including us. And unlike real racing, all cars are exactly the same. Nobody’s car has a better or more expensive engine, a faster pit crew, or more spares. The work that a team puts in to developing the setup and their drivers abilities directly correlates to success. The fairness that brings also allows for some incredible racing.

An iRacing team can’t come close to all the same thrills and challenges of what a real-life racing team entails, but it’s as close as 99% of us will ever get. Everyone on this team has a day job and realistic expectations. We’re just here for fun and to live our dreams in the only realm that allows us to – the digital one. We hope you’ll join us.