The Hooniverse team typically tries to actively post about the comings and goings across our various fleet of vehicles. Whether that is Jeff’s latest purchase, or Ross’s V8 4Runner, there is always something happening in our Slack chat that spills onto the front page of the site. For every purchase, there is usually several than end in “wow that looks like an awful idea”. I’ve been quite busy on the car front, buying two new cars at the end of 2020 within about a month of each other. However, they are both gone already; what ended up happening to both of them was a surprise. One good, one bad.

In October 2020, I was still driving a 2017 Jeep Wrangler Unlimited Big Bear Edition. It was a great experience, and I’ll always have an empty space in my life without a Jeep. However, I was getting the speed bug again, and ended up trading it for a bright orange 2020 Mustang GT. It was (naturally) a 6-speed with the blackout package, and even though it didn’t have leather seats or the larger touchscreen from the Premium trim, I immediately fell in love.

Not a week after trading the Jeep, my wife goes “I miss the Jeep”.  That was followed soon after with “we need another Jeep”. So somewhere around November of 2020 we went looking. If you have taken a look at used car values, you know they have gone bananas. Jeep Wranglers in particular are expensive on the used market, which is why I originally spent $35K for the hard top Big Bear in 2017 vs., well almost $35K for a comparable used JK. This time around, we simplified things and ended up purchasing in a black 2021 Wrangler Sport. Two doors, no frills. The interior was markedly better on the JL compared to the JK. Plus, I loved the 2.4 cylinder turbo engine and was happy to have a soft top again. After some negotiating, we brought it home. 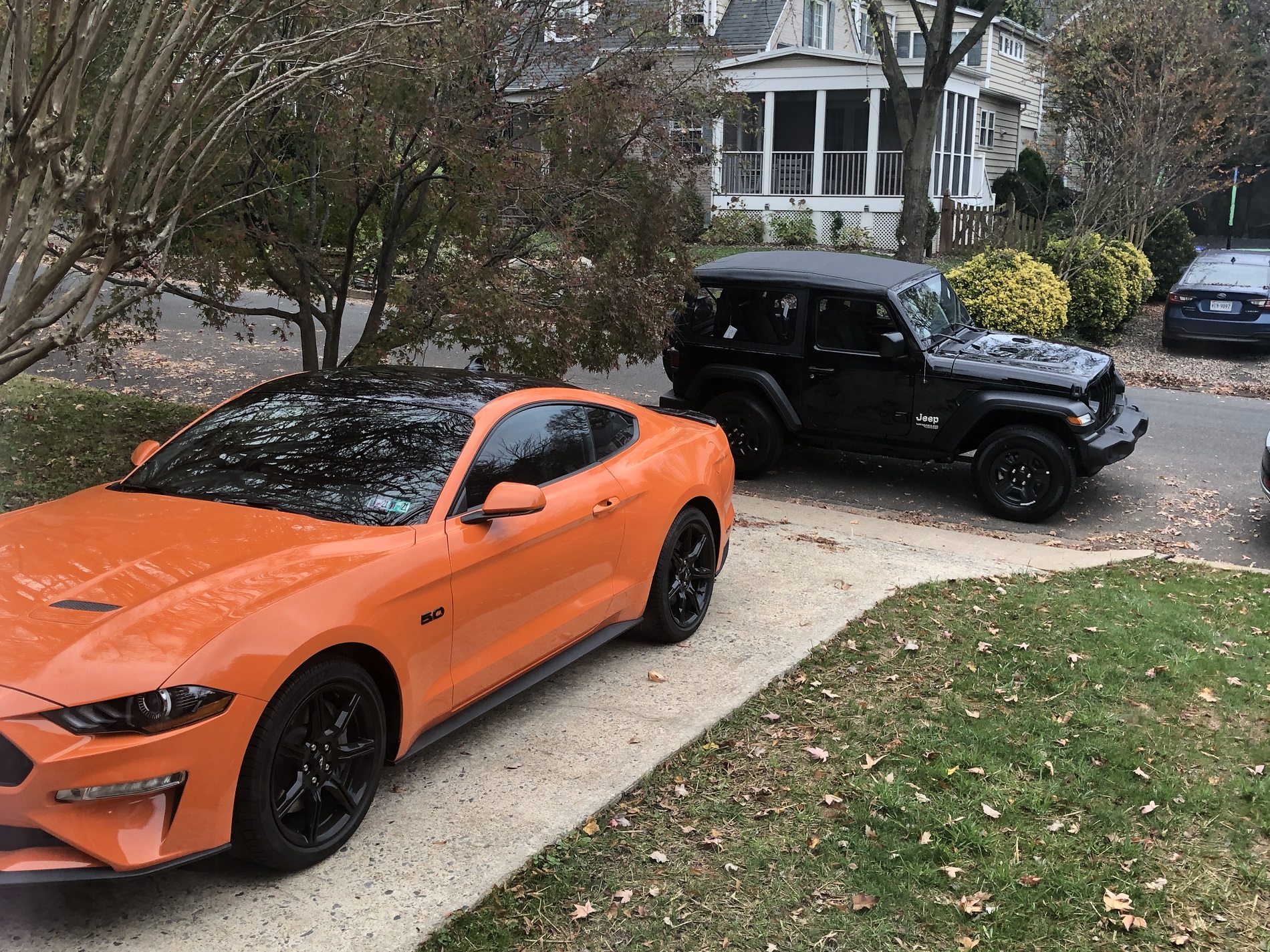 Here is the happy couple.

In a Happy Place

The November to March time period was the happiest I have been from an automotive perspective in years. As much as I enjoyed the last Wrangler, something was missing. That void was filled quite well by the Mustang. I could walk outside, glance at it, and smile.

And then this happened. 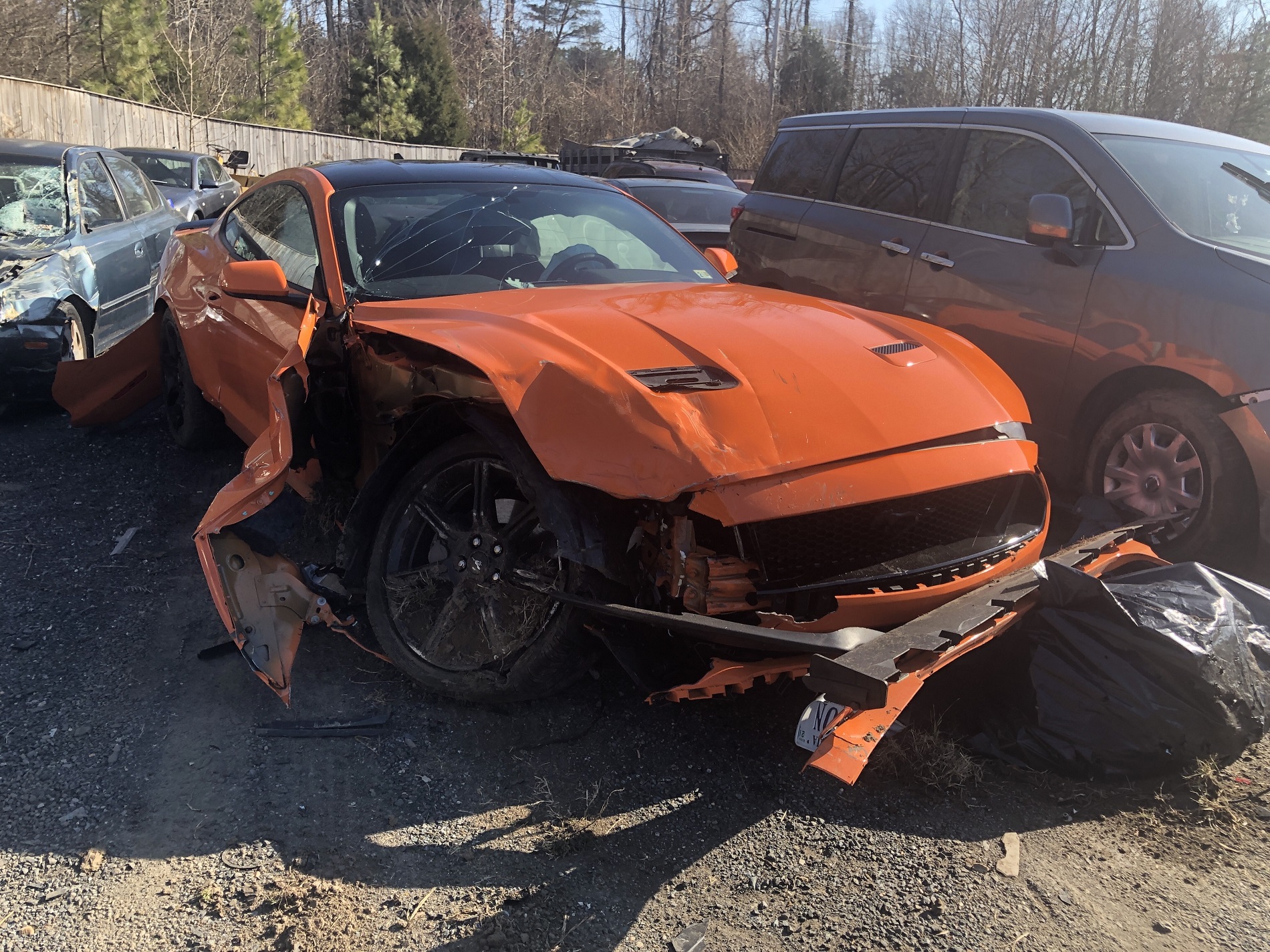 It was dark outside, and I had just got up to 55 or so (there was a white Dodge Charger behind me, so I know I was driving slow) and a 17 year old kid tried to get across in front of me.  Bystanders heard him say “I thought I could make it”. He didn’t. I ended up pretty lucky, the car took the hit. I had the dog with me, but he was cleared by the night time vet before I got out of the hospital. Some sprains, bruises, etc. Still having some daily pain, but it could have been way worse. The worst part was probably mental, it was quite a shunt, never experienced anything quite like it.

Sorry, I got sidetracked, this article is about selling a Jeep for a profit after four months. How in the hell did I do that? Well, I was catching with a buddy who owns Club Sportiva out in California. He buys and sells a lot of cars, so we were just chatting about what he’s been seeing and he said I should check out Give Me The Vin. He said it’s all online, and GMTV (as the kids call it) are quick and painless. On a lark, I put in the VIN for the Wrangler, along with a few pictures, and that was it. I got a form response, noting that they typically give an immediate estimated offer range, but because it was so new, someone would contact me. Yeah, sure.

Soon after I heard from my new buddy JD via text. We chatted back and forth, he said he would work with his manager to get an offer in place. The discussion continued as he asked a few more questions, and then it came. The offer hit my inbox and I immediately ran upstairs to show the wife. It was financially impossible not to take it. I’ll have to cover the “why” in a future article, let’s just say that another purchase for a black convertible is in the works.

I’m not shilling for GMTV, I’m just that enthusiastic about how easy it was. You put in your VIN, mileage, and zip code and it kicks over to the next page. From there they ask a few simple questions about vehicle color, condition, and whether it has been in an accident, flood, etc. There is a text box where you can describe things in more detail, and then you can drop in a few pics, your contact info, and done.

For my wife’s car, which I also put in a request for, it gave me a range immediately since it’s a 2012. For the Jeep, as I noted above, it took a bit longer. However, once I accepted, they sent me a package with a quick DocuSign stating that the mileage and condition are what I said it was, and then there is a laundry list of pictures to take. I was able to email or text them, and that was it. That all happened this past Tuesday. I got a call the next day from the logistics coordinator, they will either send a truck to pick up your vehicle, or you can drop it off at a location nearby. I chose drop off, and less than 48 hours after clicking “submit”, I arrived and met their POC in the parking garage.

He plugged in an on-board diagnostic tool to the Jeep to make sure it was firing on all cylinders. After that, we went inside, I signed some paperwork and got the check. Note, if you have a lien, they will hold  a small percentage until after the title is transferred to them. But we both signed something agreeing to those terms and I expect a FedEx’d check in the near future.

That’s it, the money is in my account, they are paying off the loan with the lender directly. I won’t share the exact number I got, but it was unbelievably good, and I made an overall profit after four months of driving the Jeep. My contact said it would likely head to the Texas area, where used car prices are apparently highest. Whatever, time to car shop for the wife now. Her unreliable GL 450 is probably going to break again.

Give GMTV a shot, it’s worth a look.