I’ve had the yet-to-be-named 4Runner for a few months now. (Millenium Falcon is the working title, in case you were wondering, continuing my Star Wars theme). As is the case with any new-to-you project, three things need to happen: Set a baseline, mend existing issues, and start improving. Much of this has happened. Progress has been strong. Things are off to a good start in V8 4th-gen 4Runner land. As expected.

First, some basic maintenance. Oil change, new spark plugs, and replacing of the cabin filter. Steering effort was high and the power steering fluid looked questionable. We flushed the system out and added new fluid, and effort has improved since. Only days later a horrible screeching noise developed. It worsened under acceleration and got louder as days went by. The idler pulley bearing was crying out the last ear-bludgeoning notes of its life. A couple of hours later and a friend and I had replaced it, the tensioner, and the serpentine belt. We should have done the timing belt while it was all apart but it looked perfectly fine. Another project for another day. 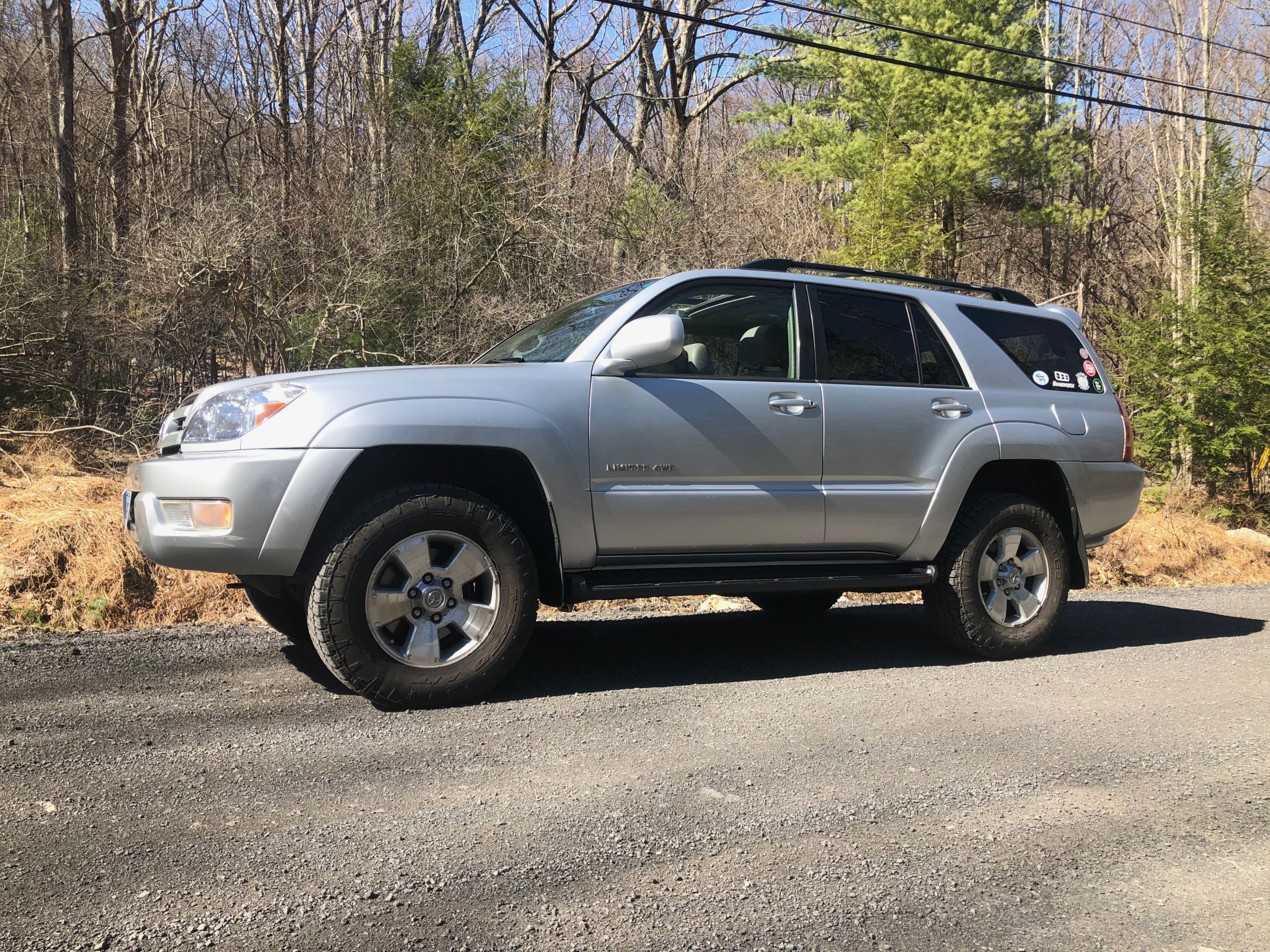 Then I had to start tinkering. As I found with the Stormtrooper 4Runner, the OEM reverse lights were simply useless. $15 and 5 minutes of swap time later and my latest T-4R had the same laughably bright replacements as did my first T-4R. The difference means now it’s daytime behind the truck when it’s in reverse. Much better.

Head unit upgrade… or not

Then on to some “fun.” The first to be addressed was the lack of Bluetooth. My goal was to add streaming calls and audio as well as easy-access, quick-charging ports. Apple Carplay would have been an added bonus. All of those panned out except Carplay. The allure of a new head unit brought me to Crutchfield. I ordered a budget JVC unit, the required steering wheel controls, and a backup camera (the OEM rearview camera cannot be used with an aftermarket radio). Everything arrived quickly and I dove in headfirst. 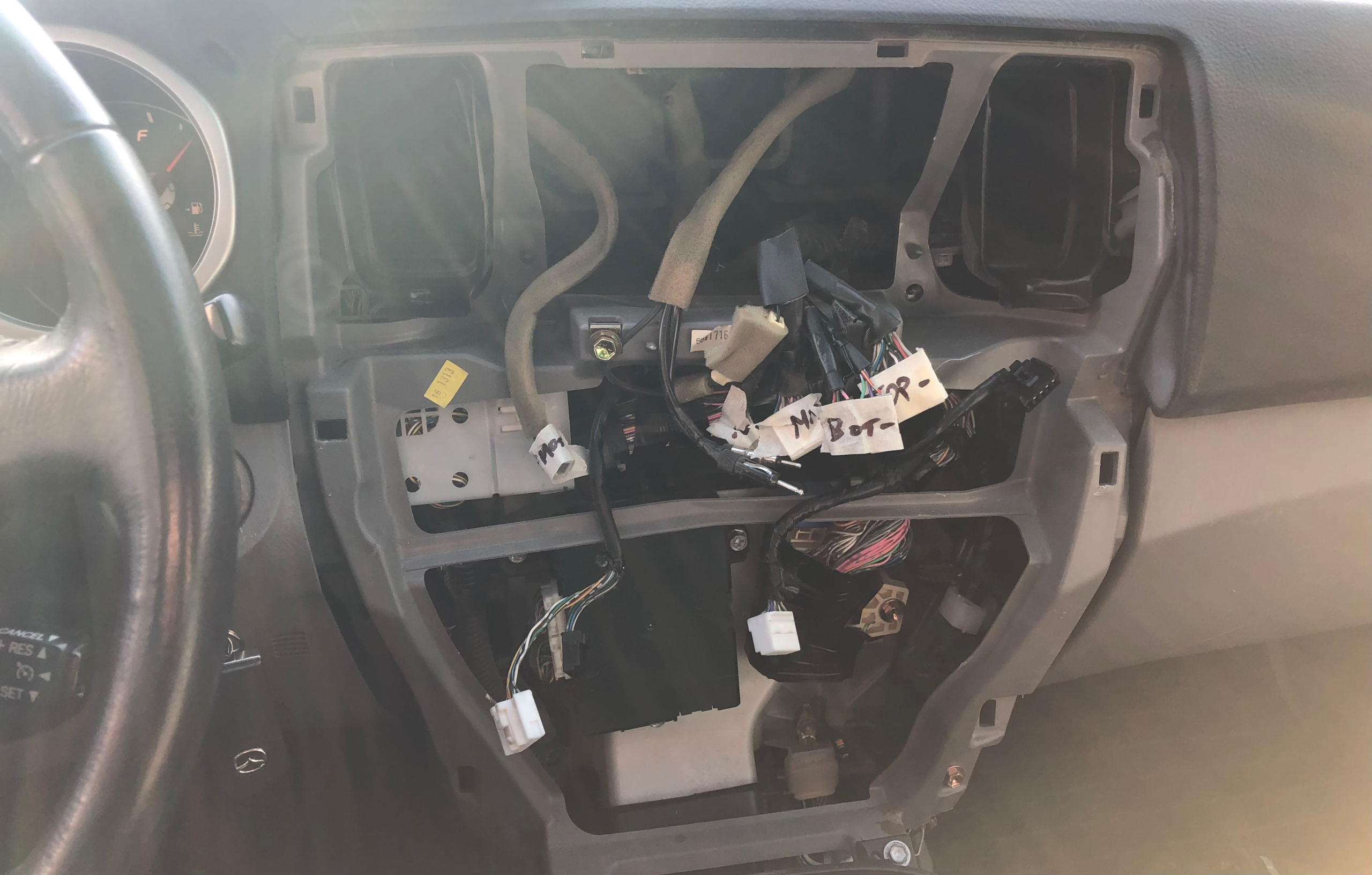 Soon I had my center console fully disassembled. Finally, after weeks of fifteen minutes here, thirty minutes-there work, everything was complete and reassembled. Ecstatic, I started the truck and played with the new electronic toys. Then I drove home and the head unit froze, crashed, and rebooted. It happened again, and again. Similar occurrences took place five more times over the next two drives. Frustration barely held at bay, I pulled everything out of the truck then checked the wiring and verified it was all correct. I reassembled everything and the freeze-reboot-repeat cycle continued. My patience had gone.

Thankfully, Crutchfield took the parts back on return. Sour taste in my mouth, I Amazon’d a USA Spec Bluetooth adapter. Installing it brought full Bluetooth functionality with an OEM look. The entire Bluetooth project took weeks of aggravation but it finally came together. Unfortunately, the little center console cubby didn’t fare as well, a tab breaking off from constant pulling and prying. Not that it served a real purpose anyway.

Time for tires, brakes, and more

Then the snow came. The existing tires provided almost no traction in the heavy, hard-pack Connecticut snow. A set of meatier rubber was required and on a strict budget. Facebook Marketplace to the rescue. A semi-local used set of four 265/70/17 Nitto Terra Grappler G2s (one size up from OEM) cost less than one tire does new. And with 8-9/32” of tread left they have decent life left, too. I’m deeply curious to see how they do in the mud and on the rocks. 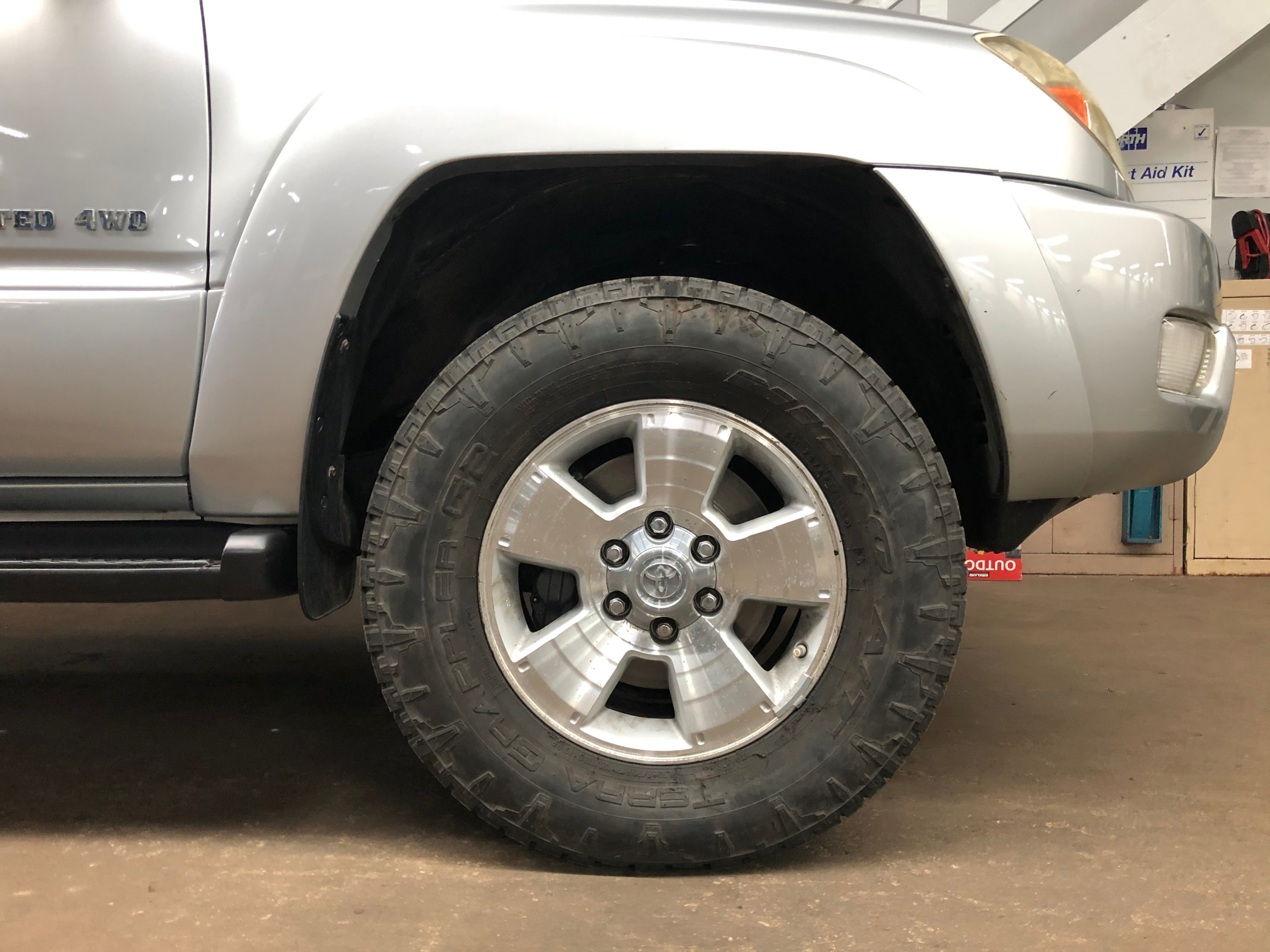 Next came brakes. There was a significant vibration in the steering wheel under hard highway braking. The back of the truck vibrated slightly as well. A coupon from a friend brought the RockAuto-sourced Powerstop replacement brake kit to under $100 for all four corners worth of pads, rotors, and hardware. Buying was easy. Install wasn’t. The right front caliper had suffered the infamous 4th gen 4Runner frozen-caliper issue. An on-the-spot replacement was required. Autozone’s best had to suffice. The rears were similarly difficult. A day after install the parts weren’t happy and mandated a second attempt at loosening things up. Powerstop makes nice equipment but it was a battle to get everything to fit perfectly without rubbing. The fight was worth it though, as now the truck brakes beautifully. 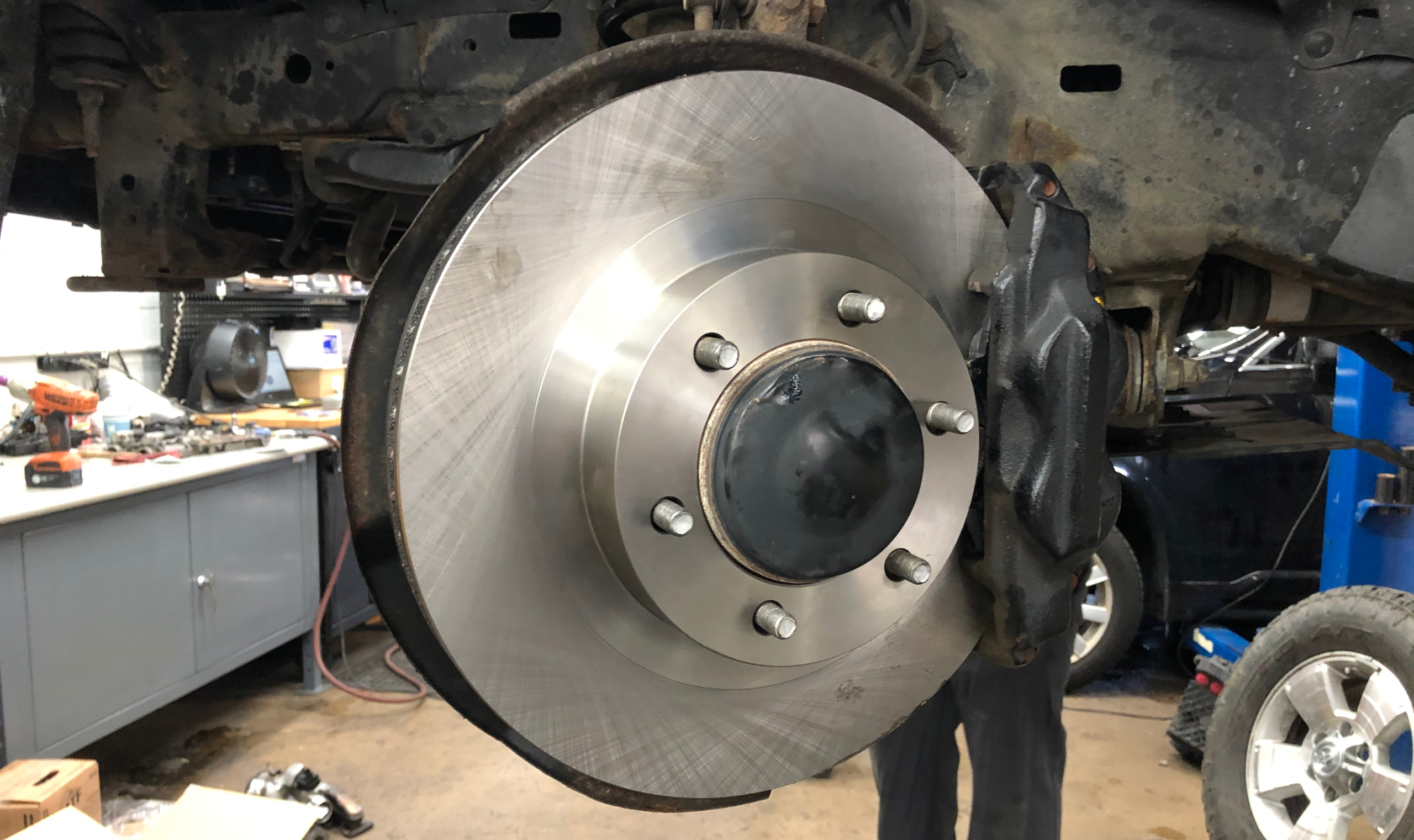 The driveshaft was next on the list of “fixes.” All of the grease had evacuated the original unit and the seal had blown entirely. Rather than try to mend a failing unit I opted for a replacement. Peace of mind is everything with an older vehicle, especially when on the trail, far from civilization. Eight relatively easy bolts later the swap was complete. Satisfyingly, the loud clunk when going from Park to Drive and when accelerating from a stop disappeared entirely. 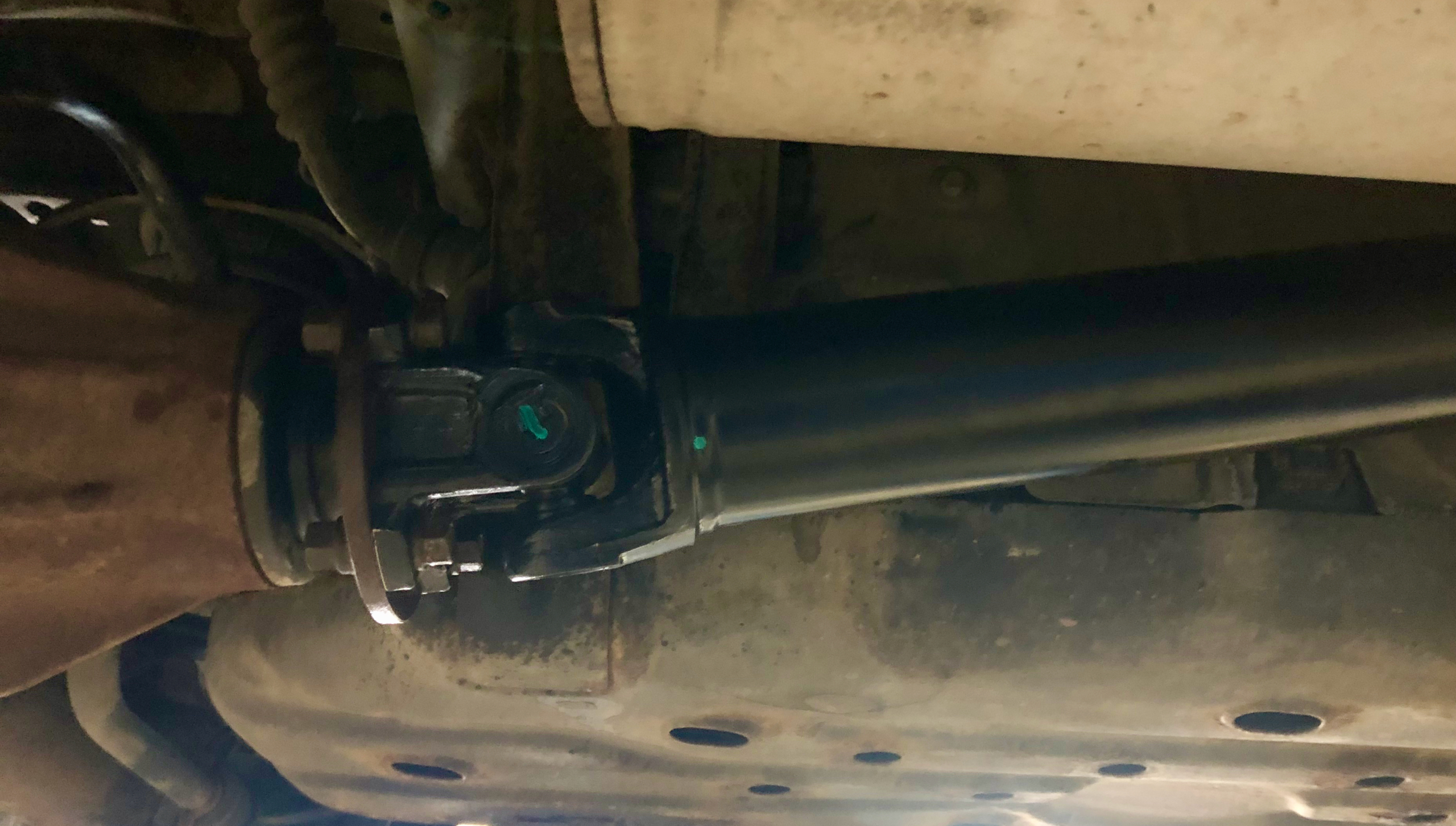 Thanks to the ever-amazing TacomaWorld forum I picked up a set of very lightly-used OEM 3rd-gen Tacoma TRD Off-Road suspension. Not fantastic by any means, but at $250 for a like-new condition kit it was hard to beat. Add in a set of Moog FJ Cruiser rear coils, plus the mandatory larger rear suspension bushings from Energy Suspension, and I was into the new suspension for under $315. Not bad. Or, at least not as bad as the install. 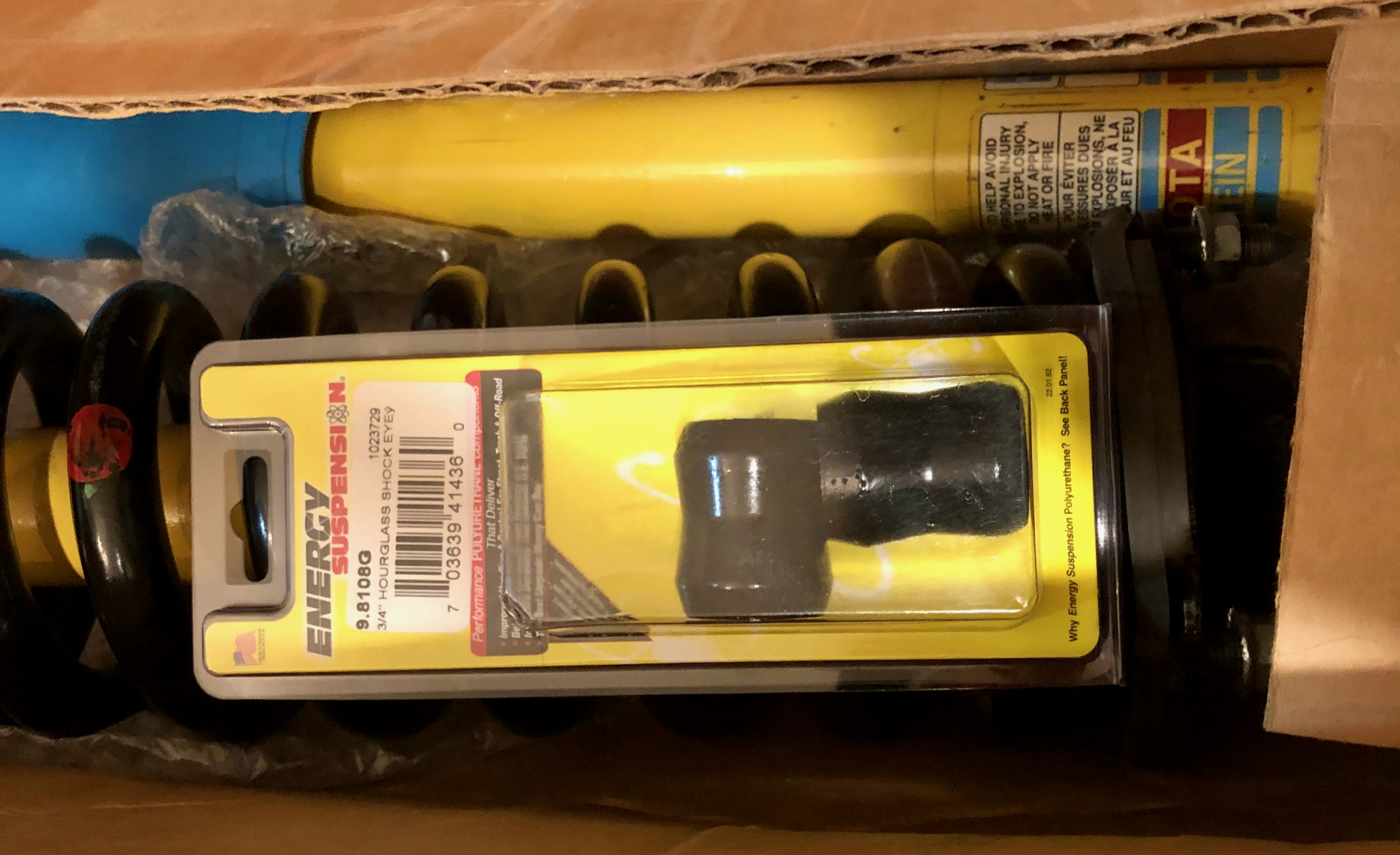 Toyota developed a trick suspension component called X-REAS for the 4th generation 4Runner. The primitive active anti-roll design ties the right front and left rear together (and the left front and right rear together). When the body rolls one direction in the corner, the pressurized system transfers hydraulic from one side to the other to prevent the truck from leaning over, in essence reducing body roll. It’s a simple design that works. Until it doesn’t. 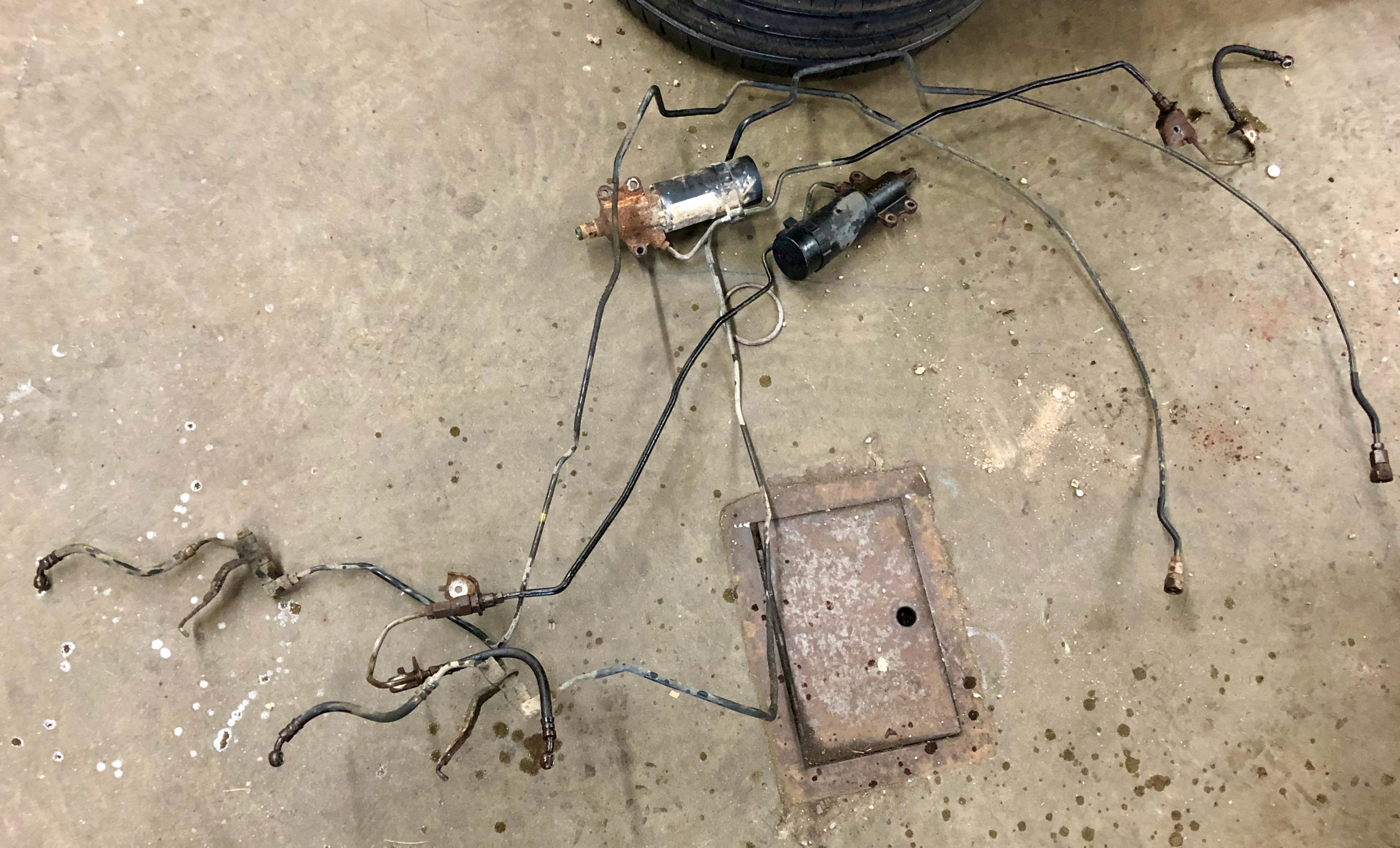 When swapping over to any aftermarket, non-original style shock absorber, X-REAS has to go. This entails removing the hard lines and canisters which house the fluid. There’s a way to go about it so that the fluid doesn’t leak everywhere. We tried that method. We failed. Fluid spewed everywhere. Like the brakes, installing the “new” suspension put up a fight. The rear shocks’ top mounts simply wouldn’t break free. What should have taken half an hour took almost two. Thanks to timing I drove with upgraded rear suspension and the original front suspension for a weekend. Reverse Carolina rake, as someone put it.

The front suspension didn’t cooperate, either. Frozen in place and rusted to the shock mount, serious amounts of force were needed to break everything free. Then once the top three and single bottom mounting points broke loose, there wasn’t enough room to slide the assembly out. Off came the tie rods. And the whole front sway bar. Memories of the Stormtrooper 4Runner and its roller-coaster-esque, fully sway bar-free ride flashed into mind. Déjà-freaking-Vu. I reinstalled the front bar the following day. Things finally came together. 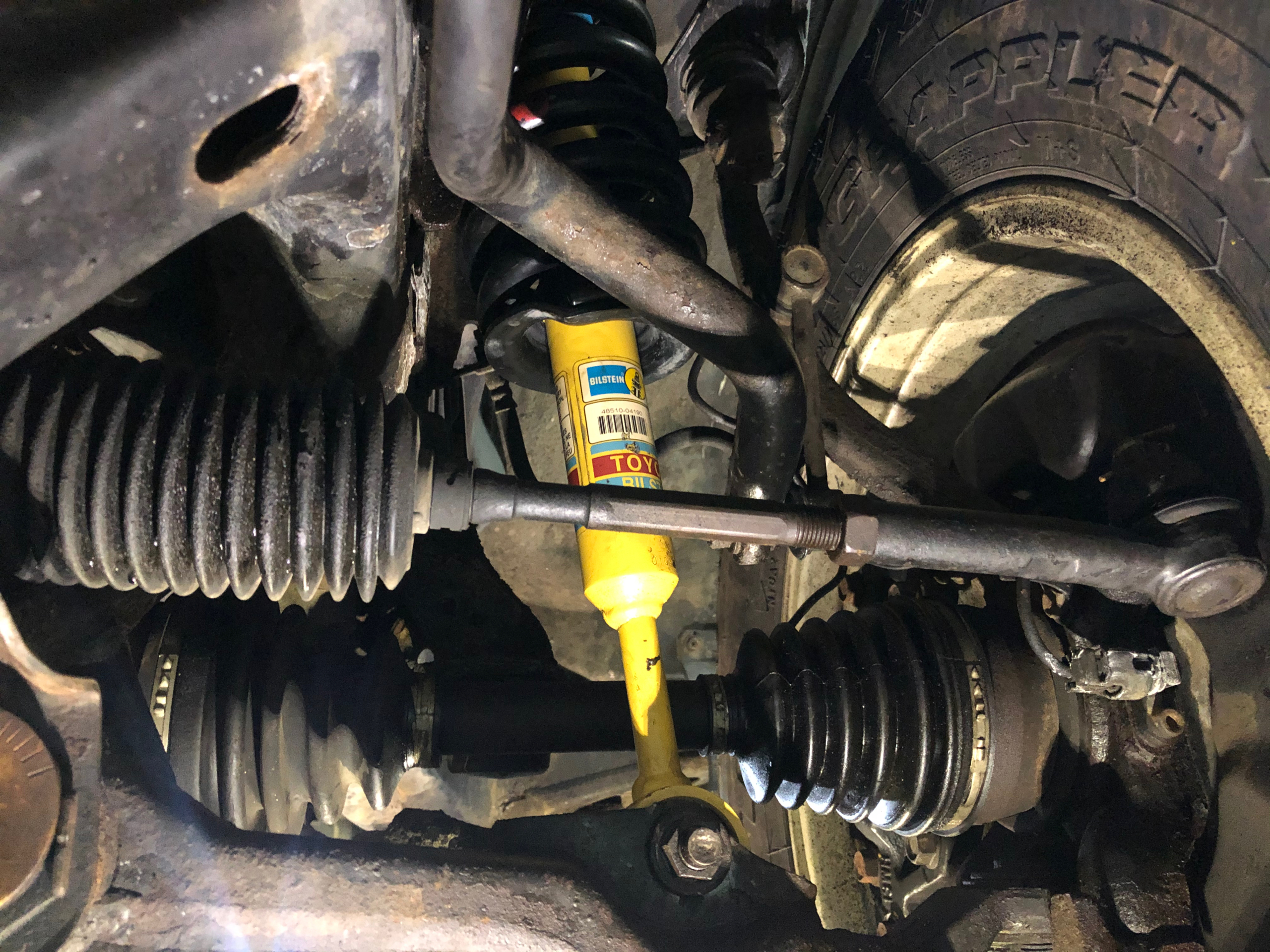 The ride quality with the new-to-me suspension is remarkable. It probably feels so because of the poor condition of the suspension that was replaced. Body motions are well controlled and potholes are absorbed with ease. A genuine great deal and value given the price. The next test is off-road. Hopefully soon. 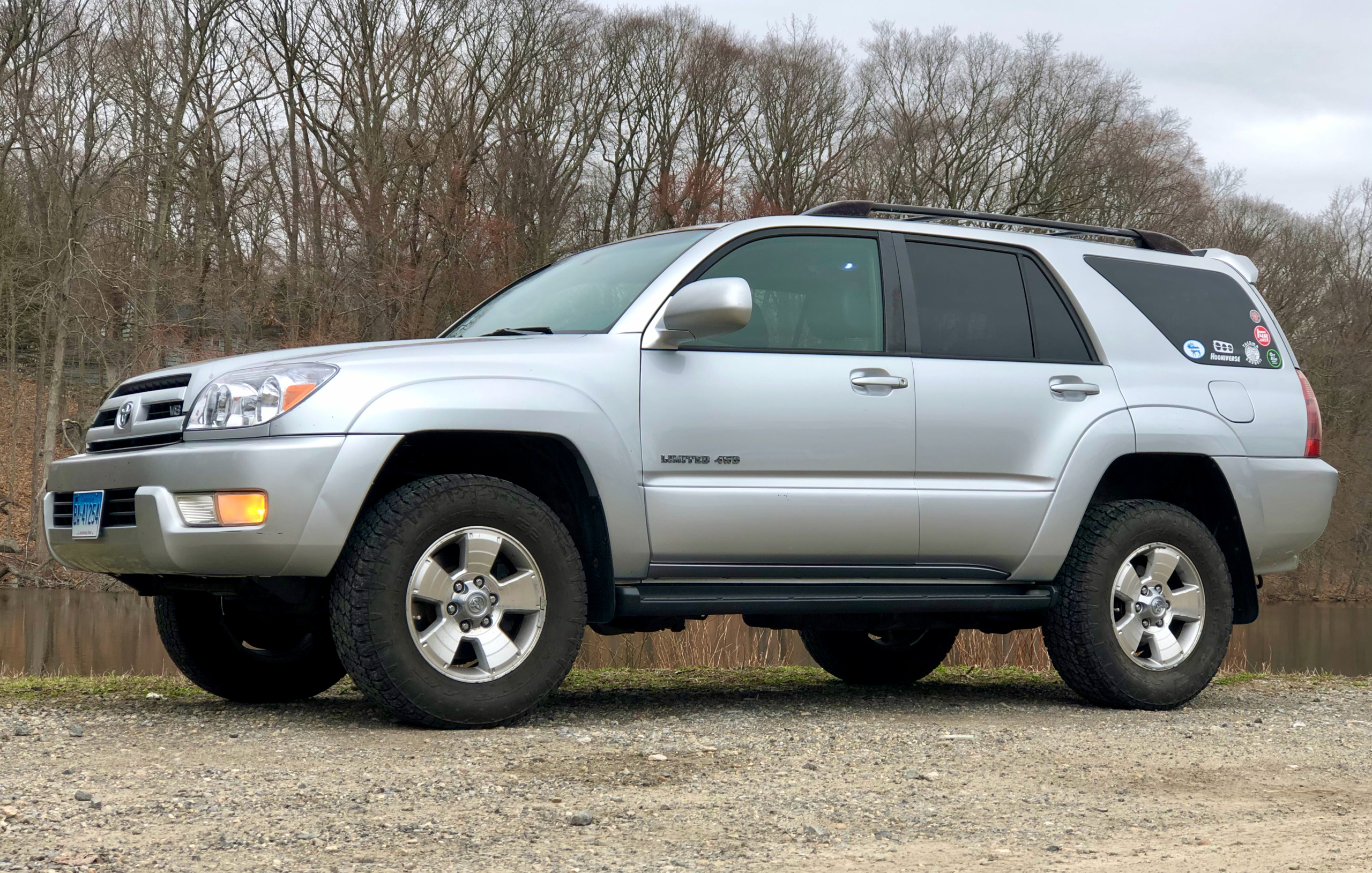 Last but not least…

Next came replacing the headlights. RockAuto was my source for the TYC parts which rang in a quarter of the price of the least expensive aftermarket option. This mini-project required removing the grille surround and fender liners but it was an easy, straightforward process. It’s amazing how much a new set of lenses freshens up an aging vehicle’s front end. 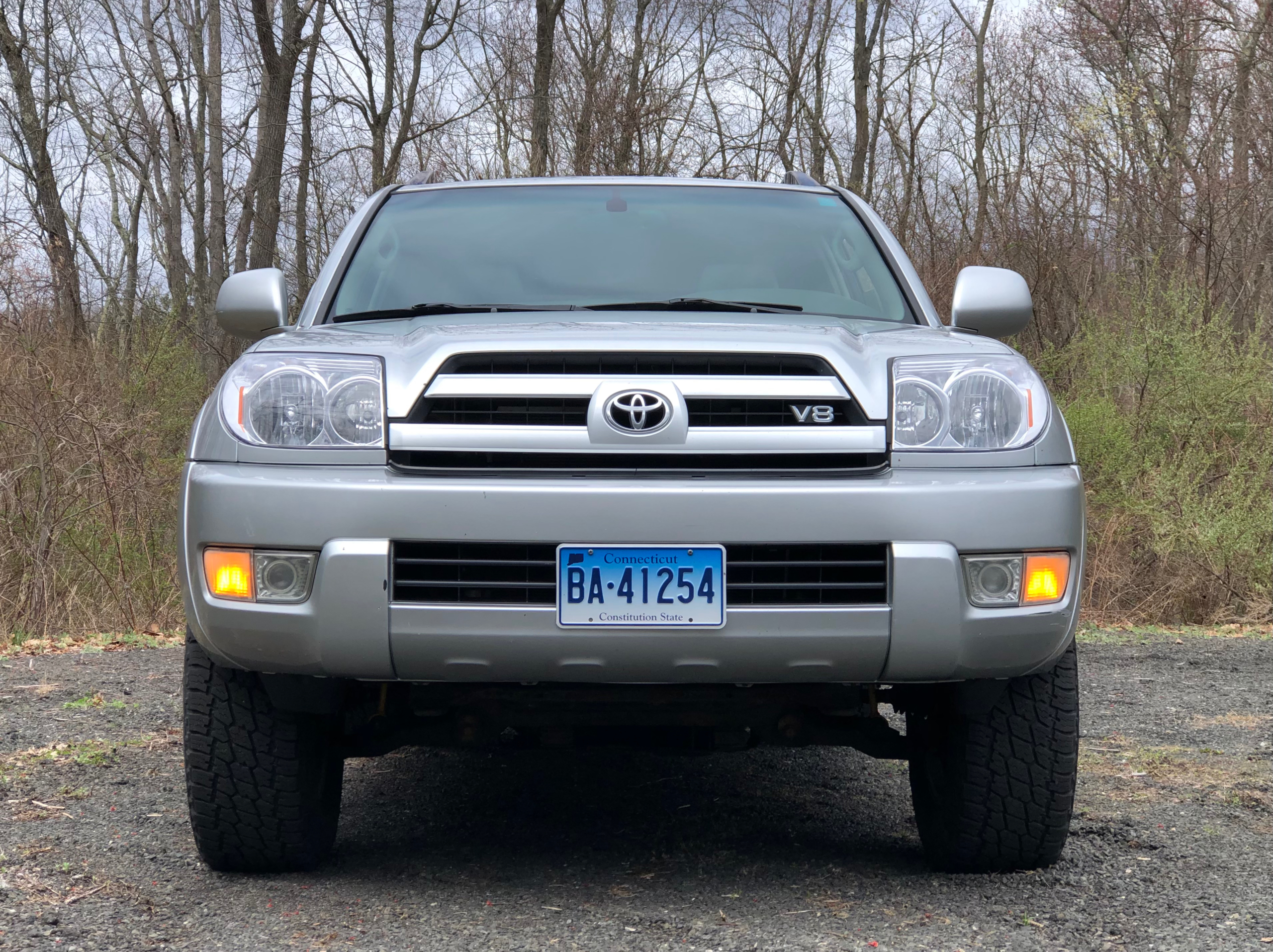 There are countless other things that need attention. Or to which I want to give attention. This is really just the start. The end goal? I don’t want (or need) an over-built, Insta-famous vehicle. Nor do I want something that’s heavily compromised in its road-going ability. While the Stormtrooper 4Runner was nearly unstoppable when the tarmac ended, it struggled on-pavement. This time around I’m looking to make this 4Runner a fairly capable off-roader while retaining the integrity of the 4th gen 4Runner’s daily driver and road-trip abilities. There’s a long way to go on the road to building a truck that would make Han proud. For regular updates, you can follow along by listening to the Off the Road Again Podcast. I’m excited about the next steps with this truck. Stay tuned. 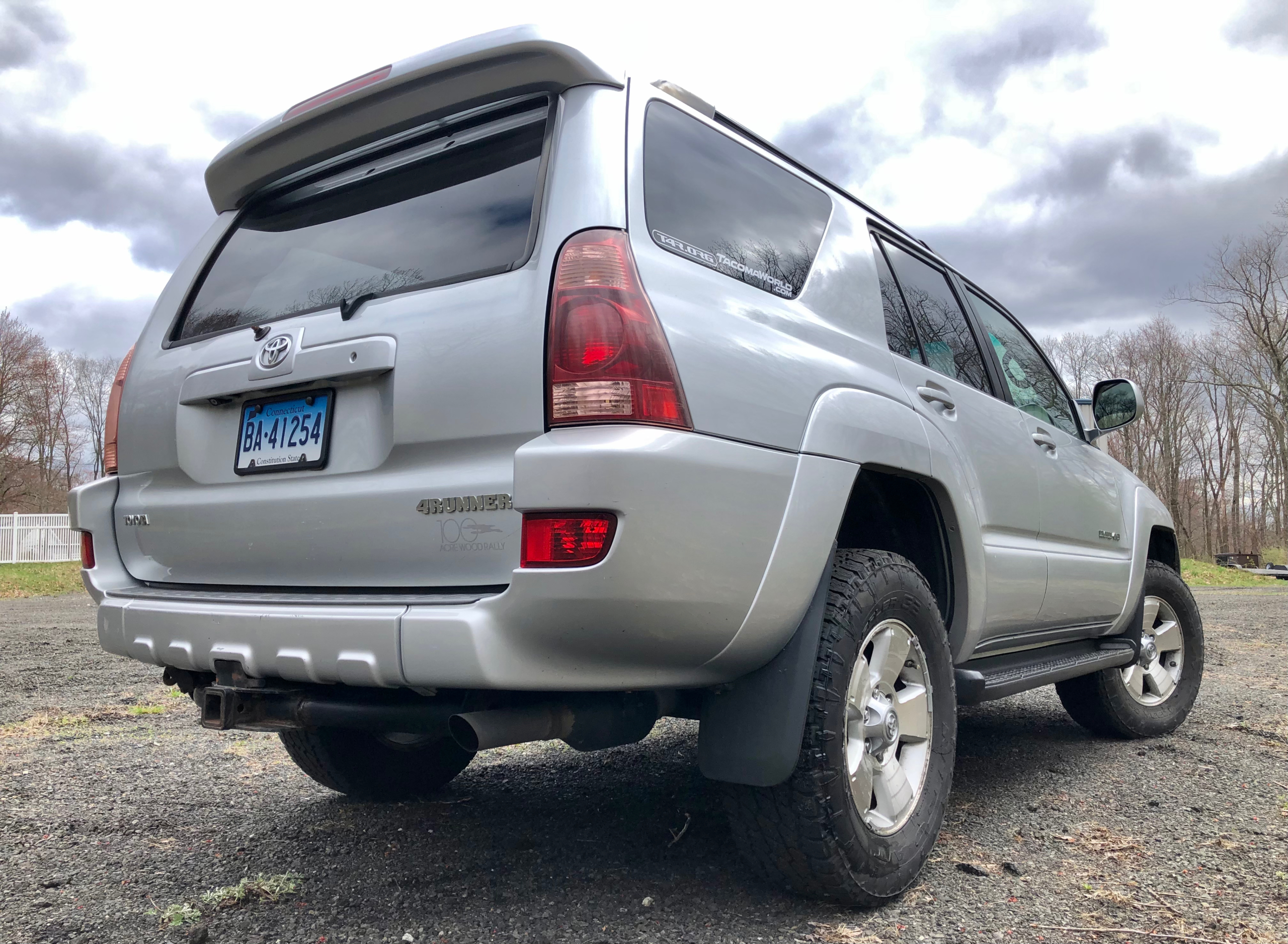 Huge shout out and thank you to my friend Marc for all the help and willingness to continue working on the truck despite the never-ending shitshows the truck put us through.