The all-new Land Rover Defender is finally here. And not just for the land afar, but for the States as well.

This doesn’t come without carrying a certain weight to it. The Defender is a truck bearing the name of one of the most storied four-wheel-drive vehicles of all time. An icon in the off-road world. And a massively iconic nameplate returning to production– and our shores!– for the first time in far too long.

But it’s not the Defender of yore. Unlike its predecessor, this one is safe, modern, and high-tech. It still has the chunky Defender looks, but more in the vein of concept-turned-reality than old-design-still-alive. And, crucially, it’s no longer body-on-frame. Say goodbye to the possibility of massively modified and lifted Defenders for this generation.

As before, it’s not limited to one body. Land Rover will offer two different lengths as well as three and five-door options. Though no longer true to their respective identifiers, the 90 model represents the two-door, short-wheelbase model and the 110 has four doors and a longer wheelbase. 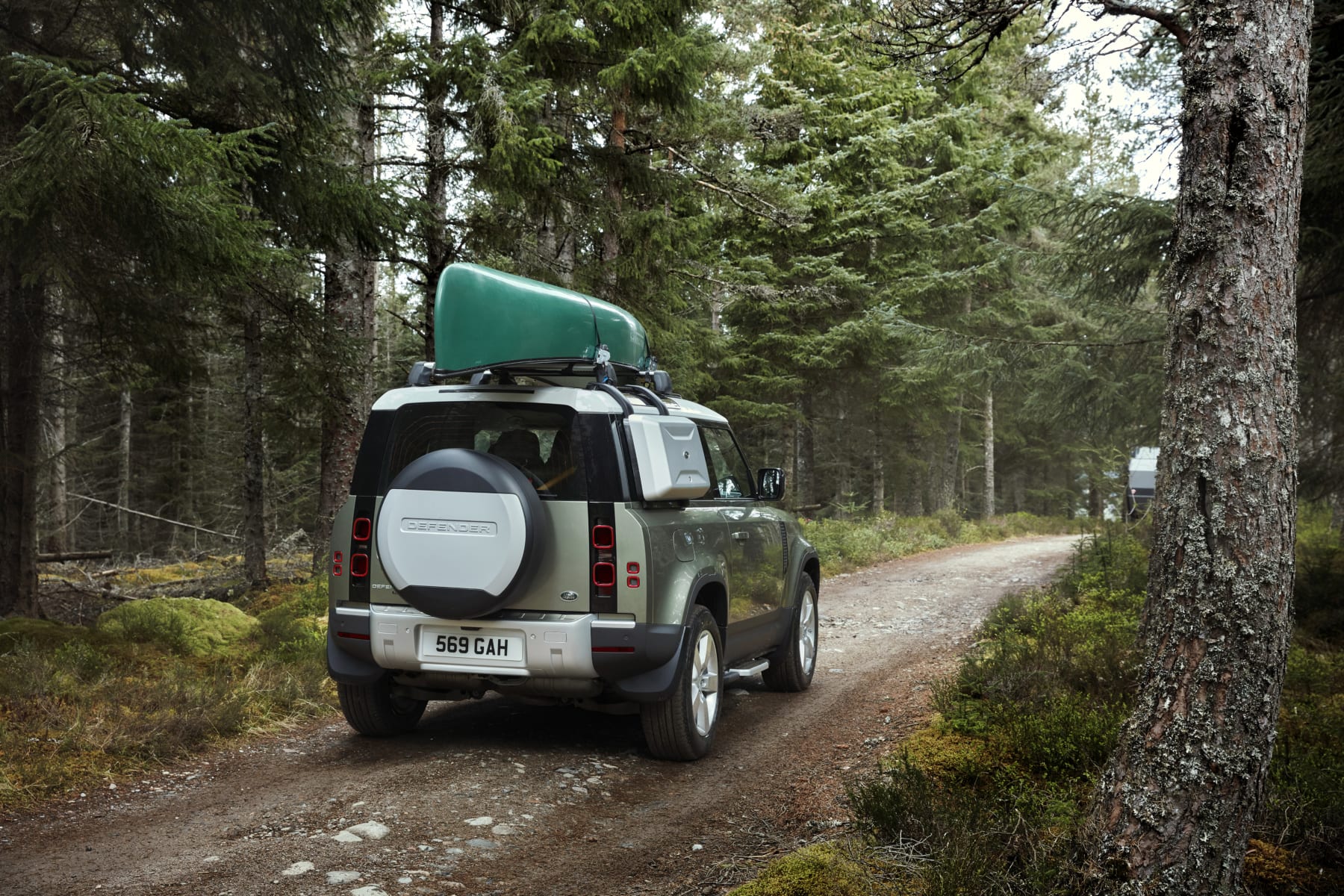 Power comes from a six-cylinder engine boasting an electric supercharger and a 48-volt battery supplement. Figures are healthy at 395 hp and 406 lb-ft., drastically more than any factory Defender has seen before. A 296 hp turbo-4 will also be available, but Europe’s diesels aren’t available for the US at launch. The transmission is the well-received ZF 8-speed and sadly the manual option is no longer. There’s a two-speed transfer case, Terrain Response system, optional locking rear differential, and an ~8200-pound towing capacity (for the 110).

And, of course, it’s a serious off-roader. The 90 has 11.5″ of ground clearance, a 31-degree breakover angle, and 38 and 40-degree approach and departure angles, respectively. It’s going to be a serious wheeling machine. As it should be.

So, what do the collective group of Hooniverse writers think of the all-new Defender? 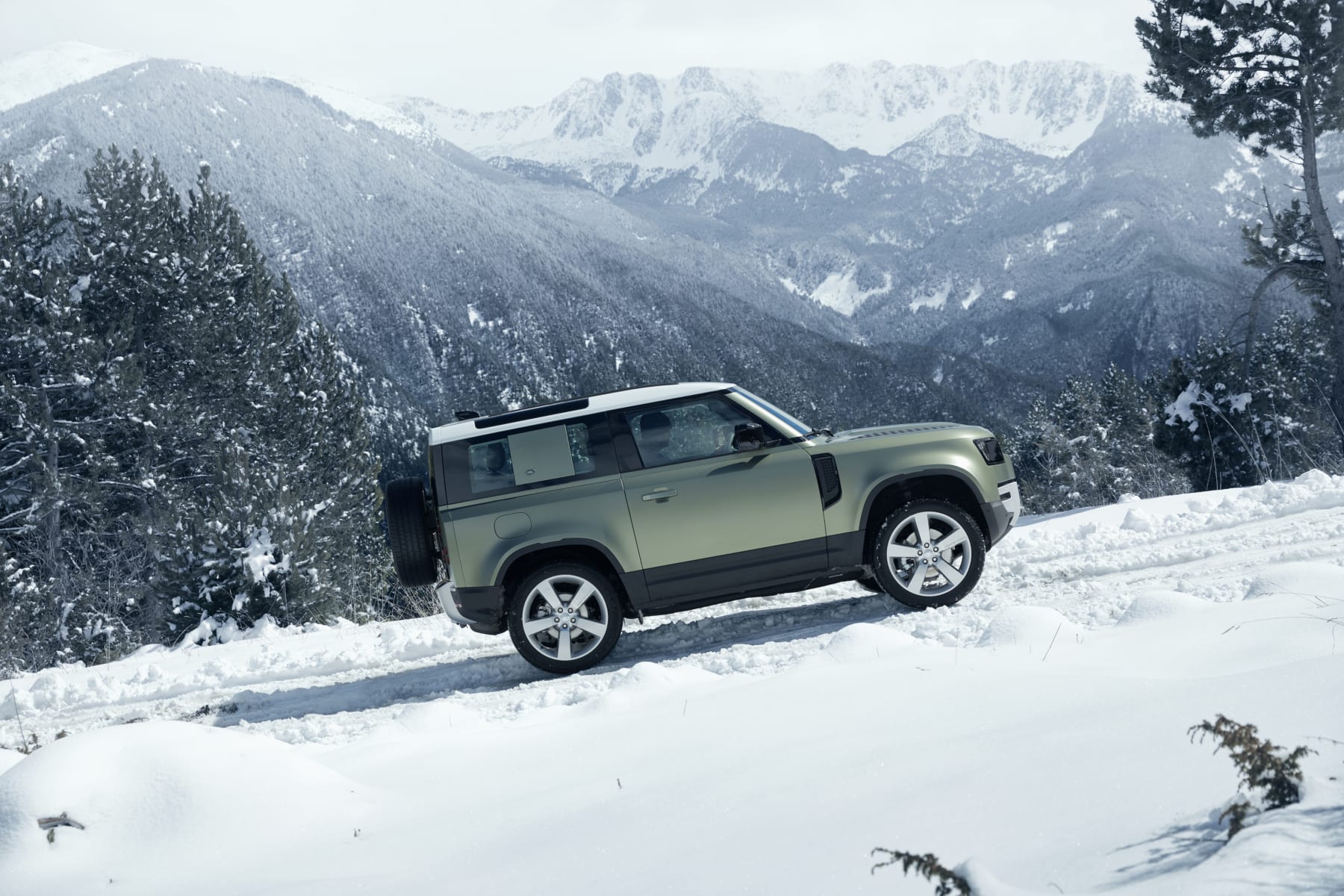 Yes. Yes, yes, yes. I love it. This is far and beyond the most excited I’ve been about a new vehicle since the JL Rubicon and ND Miata debuted.

It’s retro but not in a cheesy way. Will it be beaten on the way the original was? Unlikely. But it’s an honest, true Wrangler competitor in purpose, execution, and off-road prowess and I love how it looks. The design could have gone so wrong, but Land Rover has done well upon the Defender nameplate.

Will it steal sales from the Wrangler? Probably. I wouldn’t be surprised. At $60k it’s easily going to compete with people spending $55k+ on new Wrangler Unlimiteds. It will likely be more comfortable, better to drive on the road, and as-or-more capable off-road in the hands of the average consumer. No, the doors and roof don’t come off, but most Wrangler owners never utilize this anyways.

Anyways, I’m in love. And as the ex-owner of both a two-door off-road oddity and a white-steelie-wearing off-road SUV, it’s basically everything I’m destined to love. I love how it looks barely more like a production vehicle than a concept. I love the option packages. I love the proportions. And I love the way they rolled this out as an onslaught of Defender. Land Rover is taking this seriously, and they’ve done a great job.

Make mine an olive/drab green 2-door with the white steelies and the window-mounted gas tanks.

And by that, I mean that I’ll happily be the second or third owner of one. 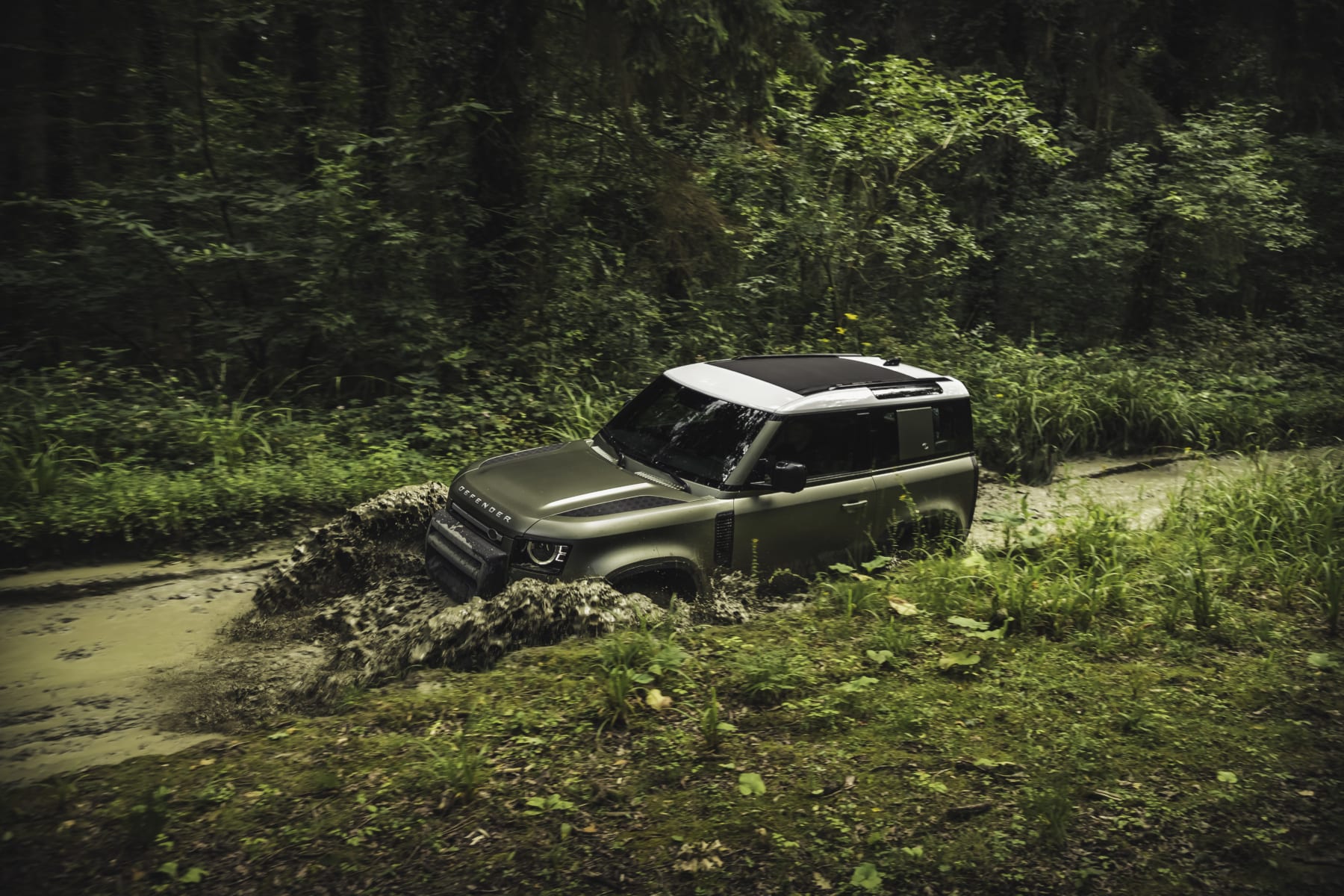 At first glance, I like it much better than the modern Discoveries and Range Rovers. The four-door version is better than the coupe. I like the images that I’ve seen, but I love the commercial spec that will be released in the UK. The steel wheels are especially good.

All I see when looking at the front is Jeep angry eyes.

I’m glad it’s back. The accessories that are coming from the factory look pretty great. 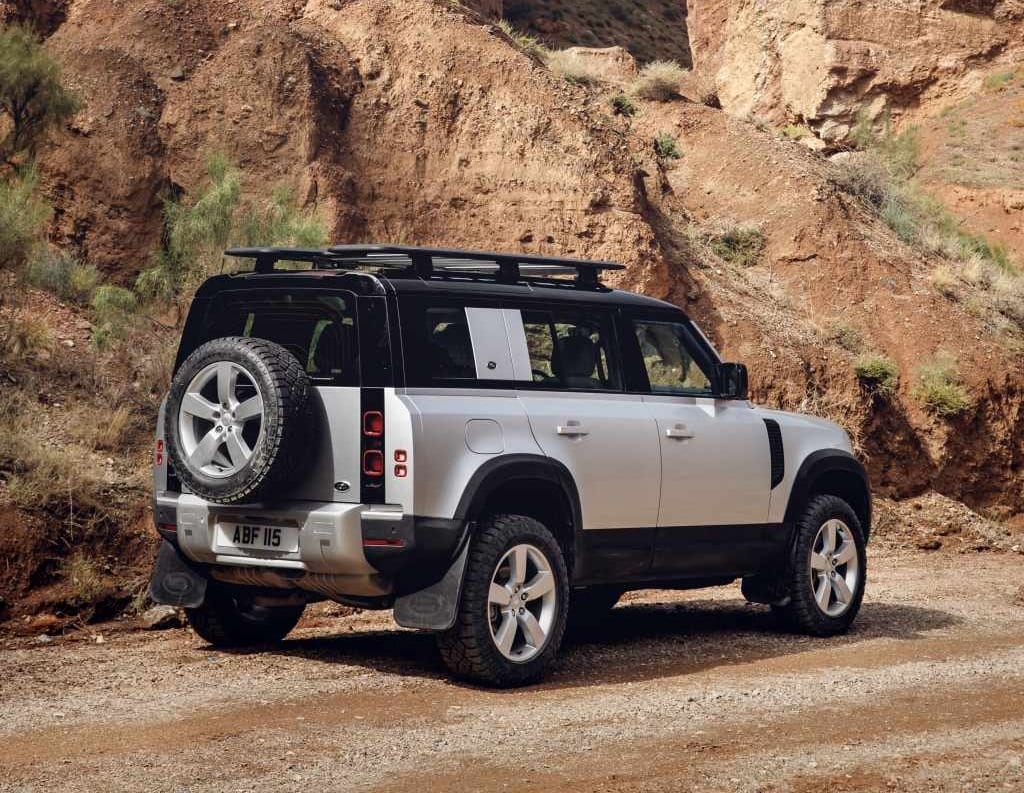 I was worried about this one. And my worries appear to have been for not, because this thing looks great. Land Rover clearly thought about both people who are Defender loyalists and those who will be new to the brand and model. There’s enough potential luxury items to make it a country club valet specialist, but there are clearly TONS of off-road items made available right through the dealer network. Sure, true off roaders might like to use their own aftermarket bits. But they can still do that. Were it my money, I’d spec a 110 in green with black trim. I’d want the 5+2 seating setup. And I’d find a way to get those steel wheels on a higher grade trim, paired around the 400-hp powertrain.

I really can’t wait to drive this thing and get it absolutely filthy. 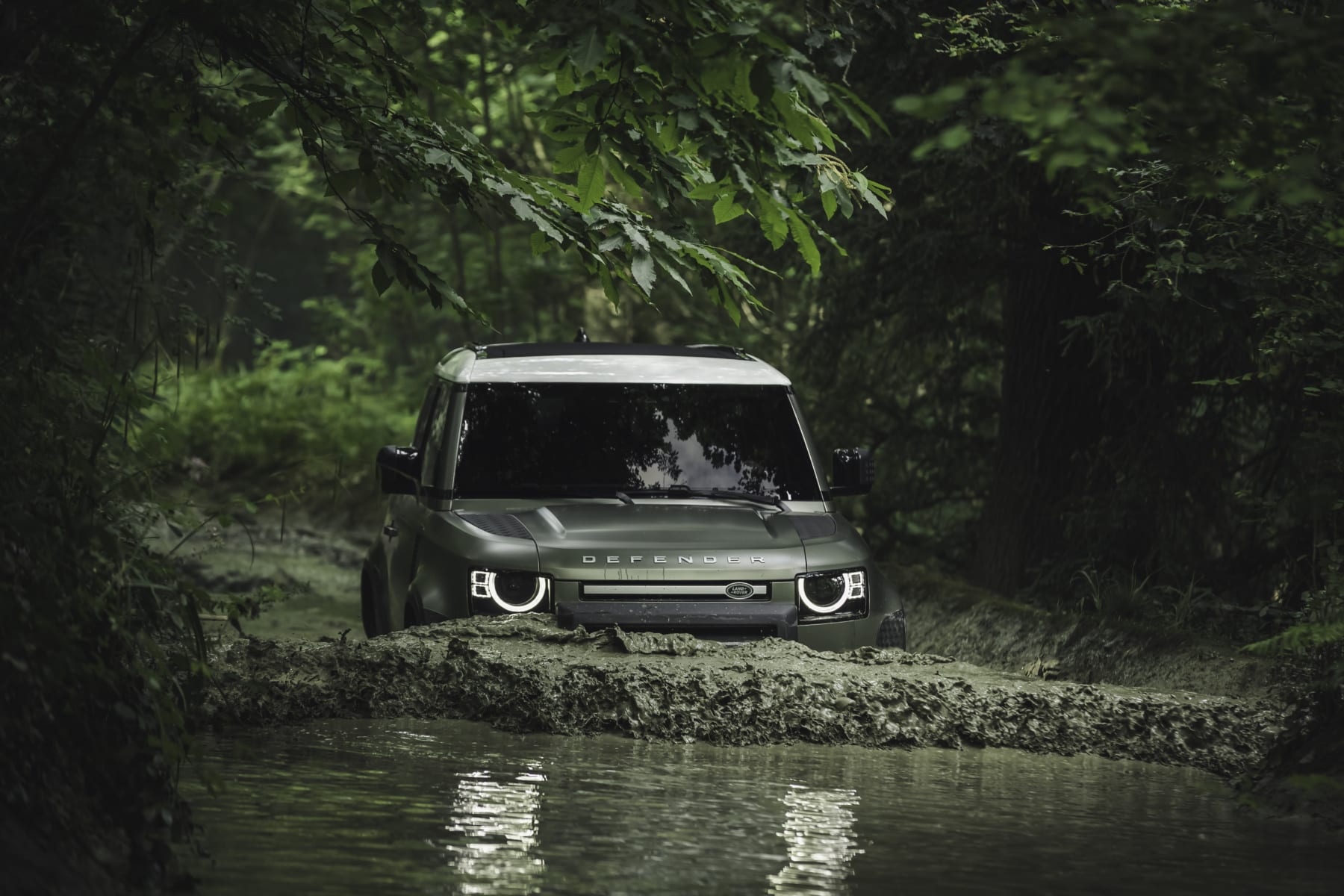 I love it. I really wasn’t sure what to expect when they announced that they were going to relaunch the Defender. The previous version was such an iconic car, I really hoped they would do the relaunch justice. Land Rover has not disappointed the new edition looks amazing in both the 90 and 110 versions. The best news is that Land Rover is bringing the new models to Australia. I cant wait to see them here and to get to drive one…. 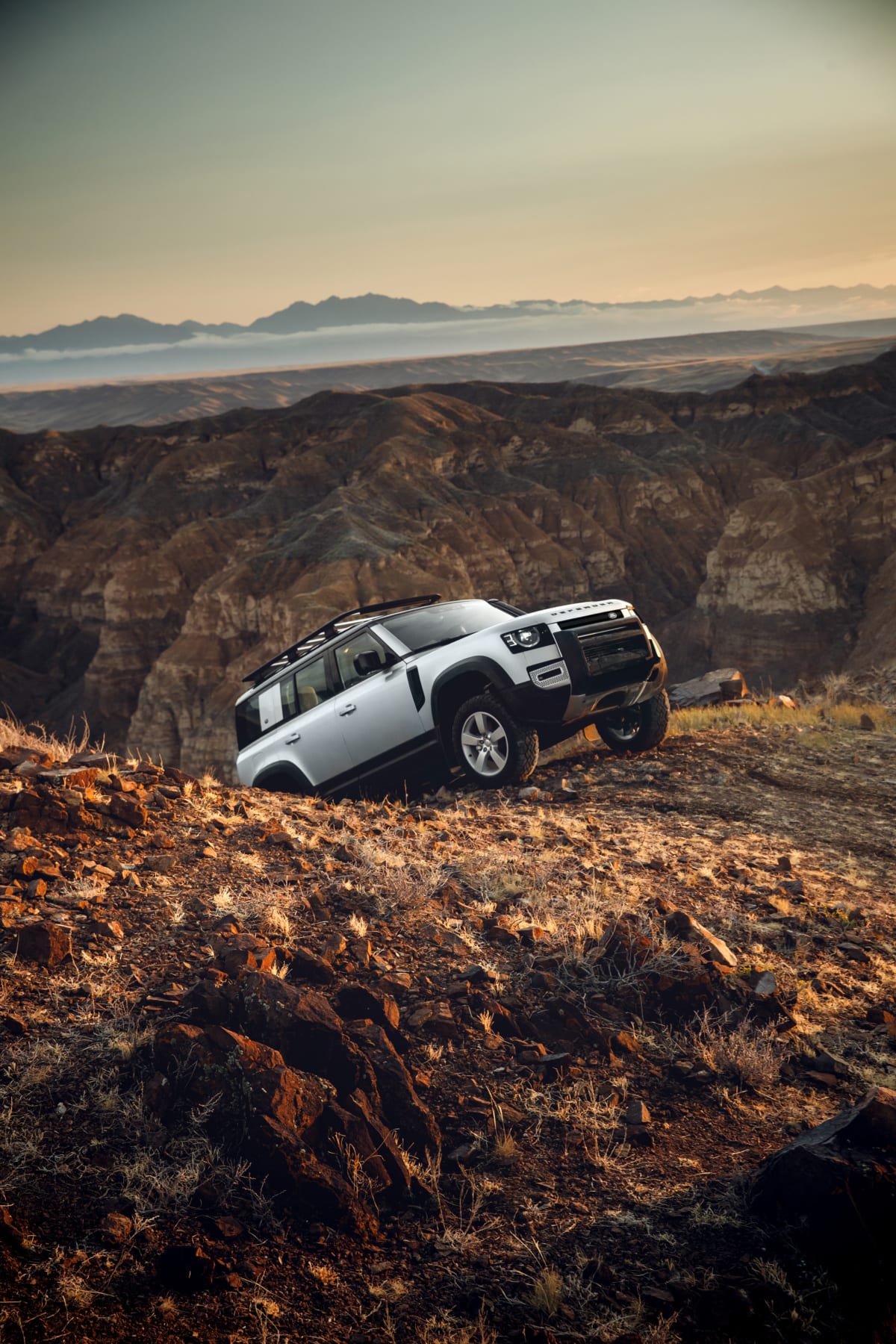 I too was really worried about what Land Rover was going to try and pass off as a Defender to us. I was expecting them to go “mainstream” if you will and make it a faux off-roader that was better suited for trips to Whole Foods. But I am very impressed with what I’m seeing. It looks like the most legit off-roader Land Rover has made in a long time and proves that they are still capable of mastering what put them on the map decades ago. It looks modern enough to be a comfortable and practical daily that can literally take you anywhere… which I guess is like every other Land Rover but without all the pretentiousness. I love it and they deserve every sale they get.

And that’s a wrap on your respective Hoons’ opinions on the 2020 Land Rover Defender. We’ve covered it a bunch already, like here and here, so now that you’ve had time to digest it all: what are your thoughts? Sound off in the comments.