With the introduction of the 2020 Defender, Land Rover provided us with several cool infographics about its new rig. Usually manufacturer supplied material like this is kind of lame but this is an exception. Let’s take a look at the chassis, suspension, and the four wheel drive system of the new Defender.

Like other large Land Rover, the Defender is an all-aluminum unibody design, as opposed to that of body-on-frame of Jeep or Toyota. But it also has separate steel subframes in the front and back. Land Rover says that this architecture is much stiffer and stronger than typical BoF, if perhaps heavier. The new chassis shares no components with other Land Rover products and was designed with minimal overhangs in mind. 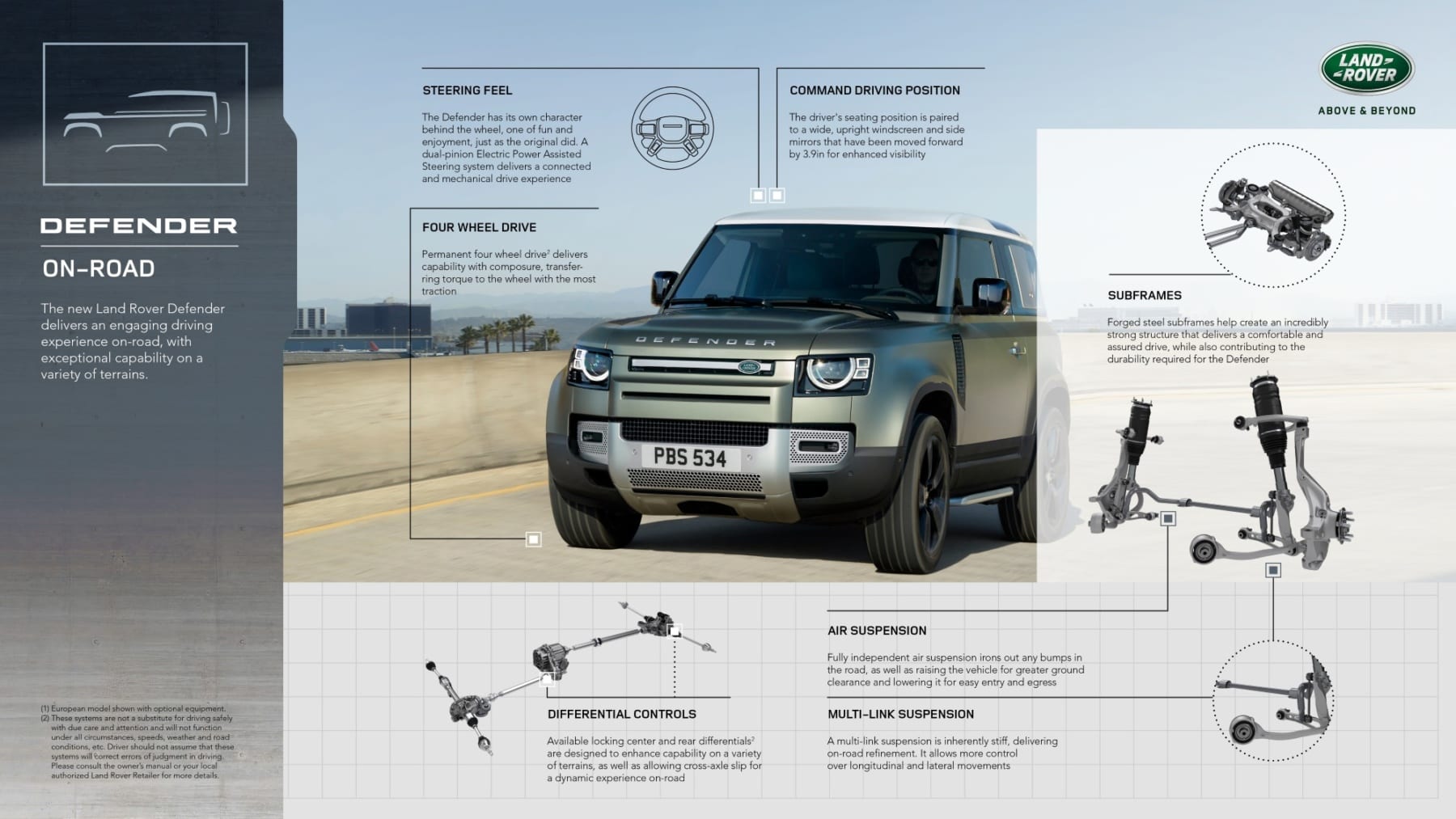 As is typical for many large Land Rover vehicles, air suspension is present in each corner of the fully independent suspension. Stick axle lover can go back to your Jeeps now. Biggest reason for air suspension is road comfort, higher payload and towing capacities. Hard core off-roaders would argue that it reduces ground clearance and axle articulation. Land Rover would counter this with adjustable ride height. In either case, this is a big departure from the original Defender which was suspended on coil spings.

The standard ground clearance for the Defender 110 is 8.6-inches. With the suspension in off-road height, it goes up to 11.5-inches. For reference, the Ford Raptor has ground clearance of 11.2-inches. The Wrangler Rubicon 10.8-inches but Jeep will offer a two-inch Mopar lift kit right at the dealership. Combine that with 35-inch tires, a modification so popular that FCA says there are no fender modifications needed and the spare tire of that size will fit too, and its a battle.

It should be noted that this independent air suspension will make aftermarket modifications more challenging. The Defender comes with 32-inch tires, sized 255/70R18, 255/65R19, 255/60R20, or 275/45R22. Of those, the 18- and 19-inch choices are available with Goodyear Wrangler all-terrain tires. But upping the size might be as easy as software change away – just force the system to off-road mode all the time, at a sacrifice of highway speed stability, of course. 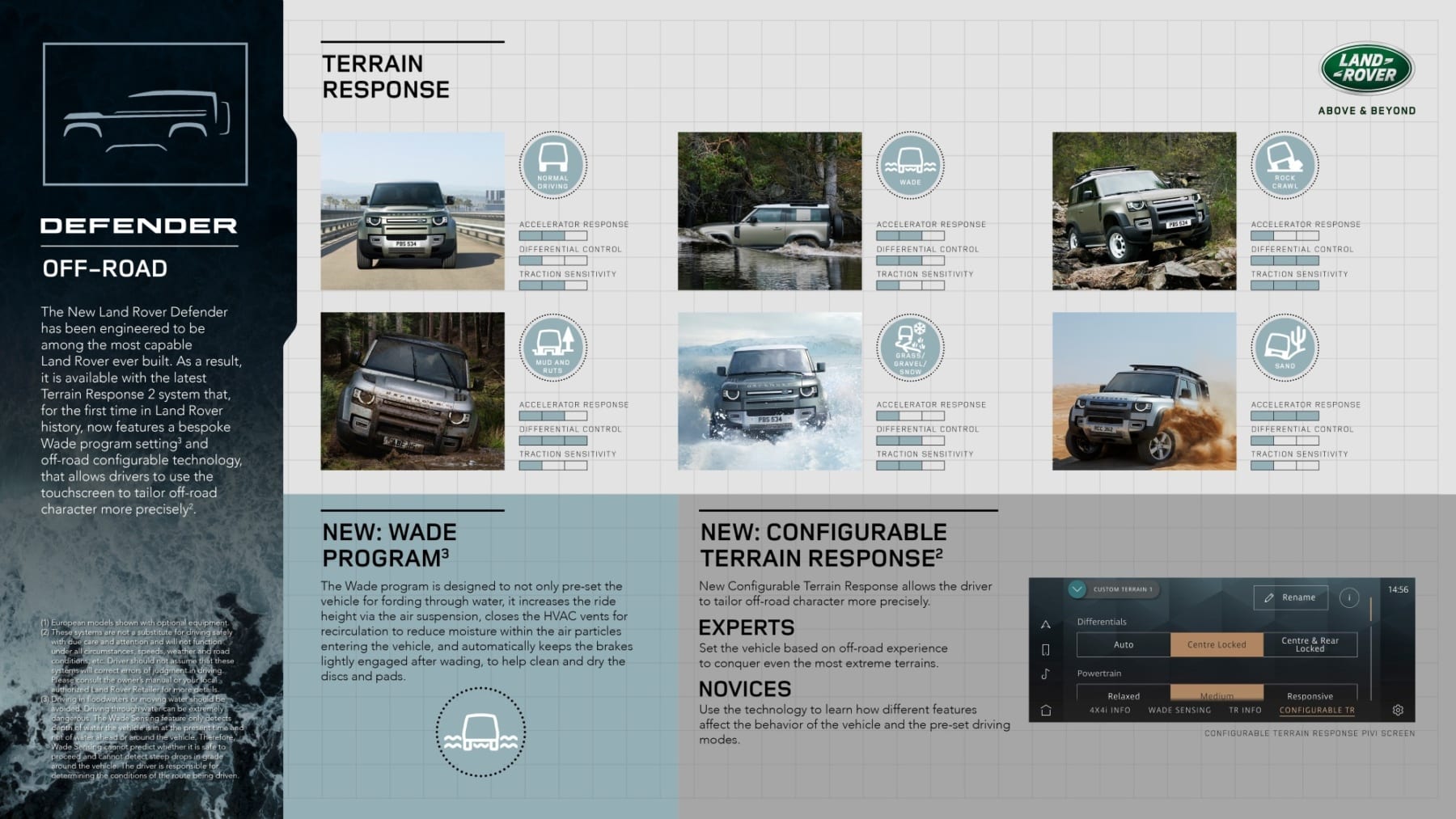 Land Rover has always been proud of the systems that control their vehicles off-road. Whereas Jeep gives you sway-bar disconnects and two locking diffs, and a otherwise free will, Land Rover tries to kind of take that control away from the driver. It’s not necessarily a bad thing. Back in the 2013 I spend a day off-roading a new Range Rover with the Terrain Response system and was rather impressed by it.

Using a combination of brakes, traction control, locking differentials (optional front and center), and accelerator pedal response, the Defender will try to drive itself over whatever rough stuff you tell it to go over. There is an automatic mode, too. Most importantly, the driver can override everything and take full control. Water fording feature is a new thing on the Defender. When selected, it raises the suspension, sets climate control to recirculate, and taps the brakes to dry off the pads and rotors once out of the water. Maximum water fording depth in the Defender is 35.4-inch, a significant five inches more than the Wrangler Rubicon. 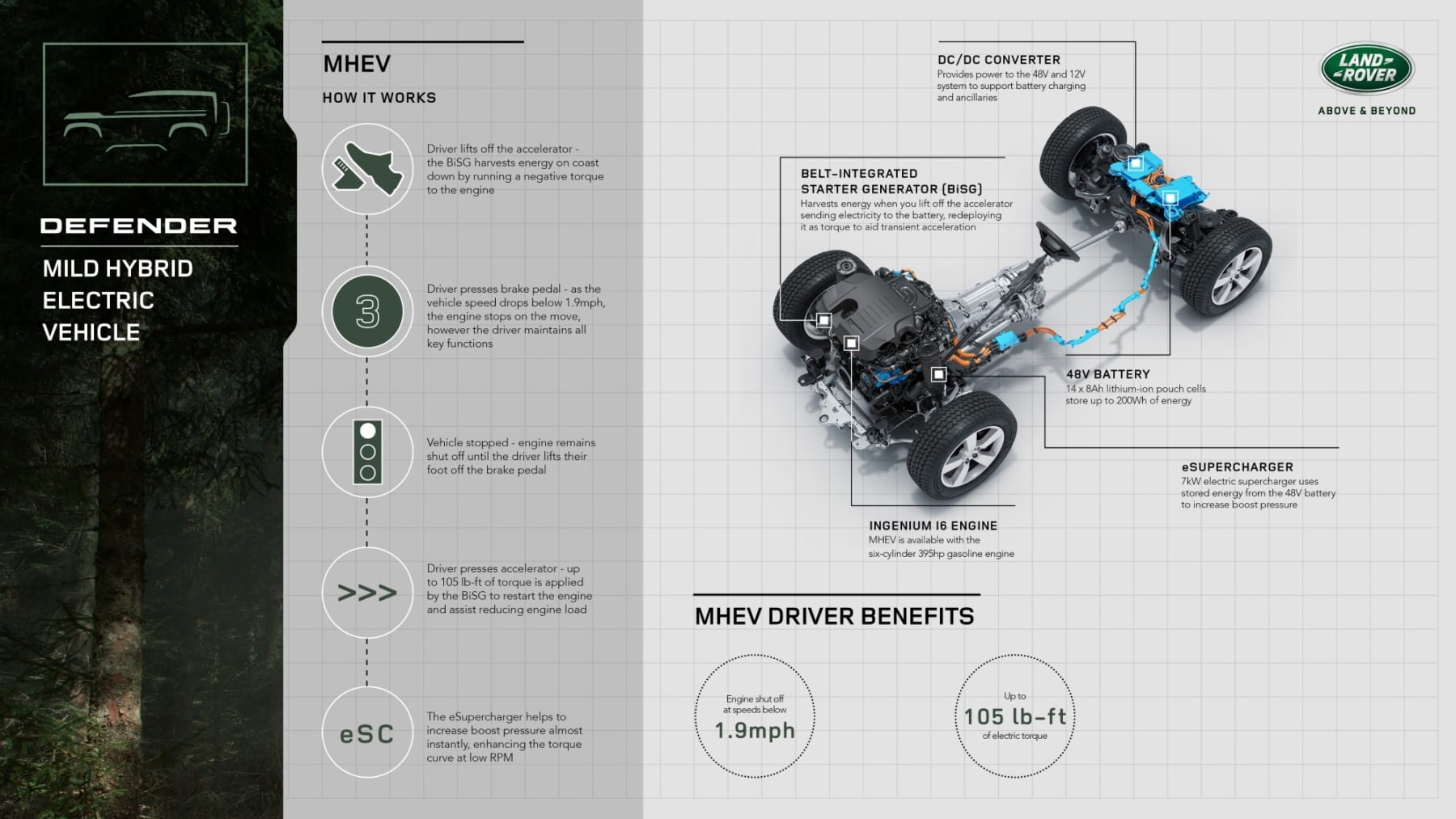 In typical driving, this system can deliver instant boost, allow the vehicle to drive at very low speeds, and generally ease the engine start/stop feature that many of us hate so much. Ram and Jeep have a very similar system on their 1500s and Wranglers, and it works really well. It provides the drive the feel of a much bigger engine with an instant low-end power, which is handy off-road, too. Both engines are couples to ZF’s excellent eight-speed automatic transmission. Sadly, at this time a diesel engine is not offered in North America. 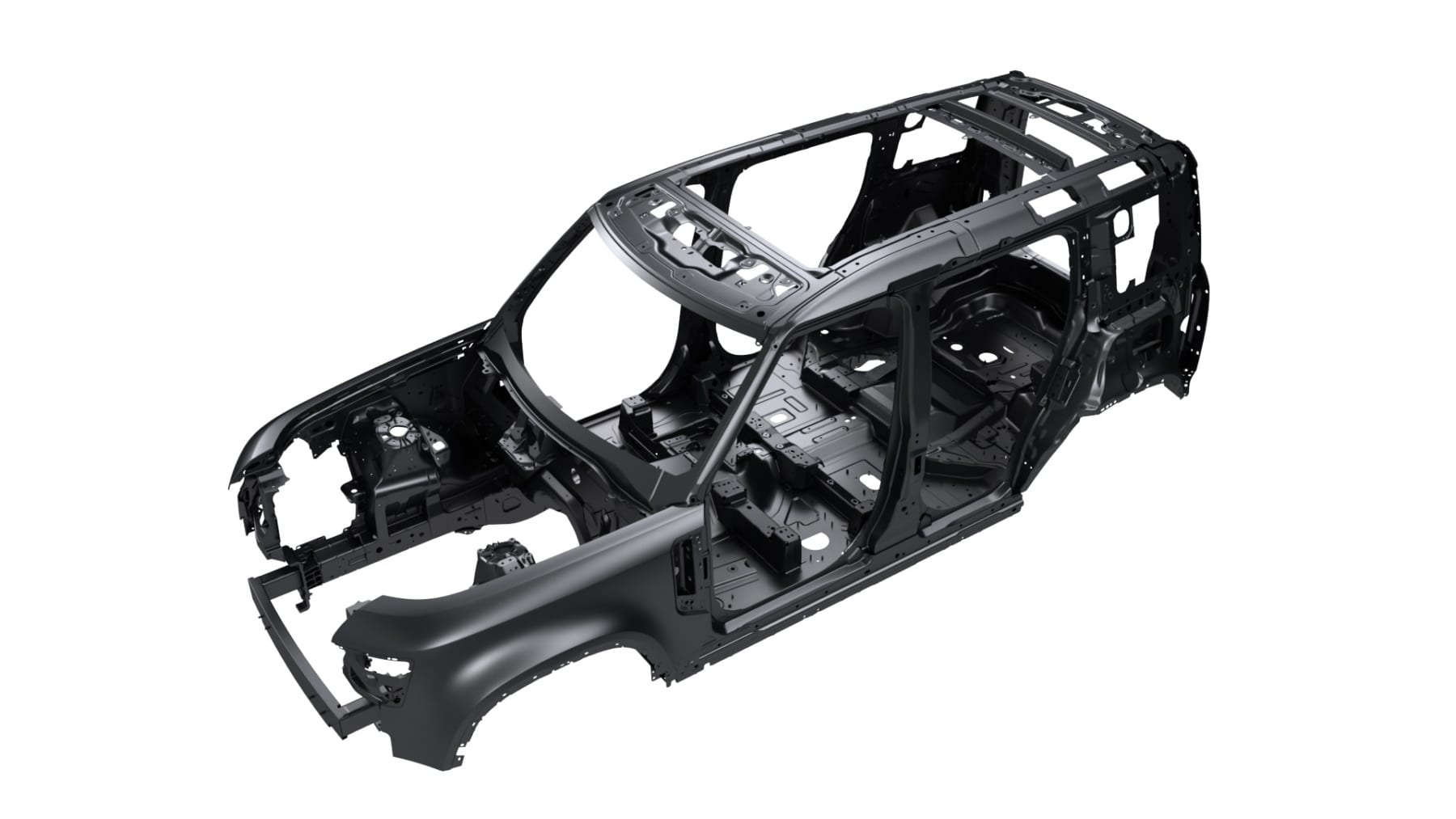 Looking the chassis, we can right away tell that the Defender is strictly a hard-roof model. And that’s a damn shame, too. This almost makes me want to say that this should have been the new Discovery. But a closer look at the roof reveals that it is a fairly open roof model. While a big panoramic sunroof is optional, a big canvas top, like on the new Jeep Wrangler power hardtop, will be available in the near future.