The adventure market has been exploding over the last few years with the popularity of “go-anywhere” machines skyrocketing. I doubt you haven’t noticed the amount of lifestyle content centered around Overlanding, #vanlife, or moto-adventuring. Prior to 2015, I can’t recall seeing a single “not all who wander are lost” tattoo once in my life. It seems these days that everyone is trying to get out and explore the vast wilderness or traverse continents on their BWM GS1200 or some such mammoth of a bike.

But what if that isn’t your idea of adventure? Well, have no fear because due to customer demand the middleweight and lightweight adventure (ADV) segments are beginning to fill out.

The small-displacement ADV segment has been heating up recently with offerings like BMW’s GS310 and KTM’s 390 Adventure (new for 2020). While those bikes seek to bring some of the big adventure styles down to small engined bikes, Honda has taken the opposite approach. The Honda CRF250L Rally sparked a lot of attention when it joined the lineup for the 2017 model year. I’ve been itching to give it a go, and Honda has obliged. The Rally ABS model I test here comes in at $6,249 and it sits at the top of the CRF250L range. 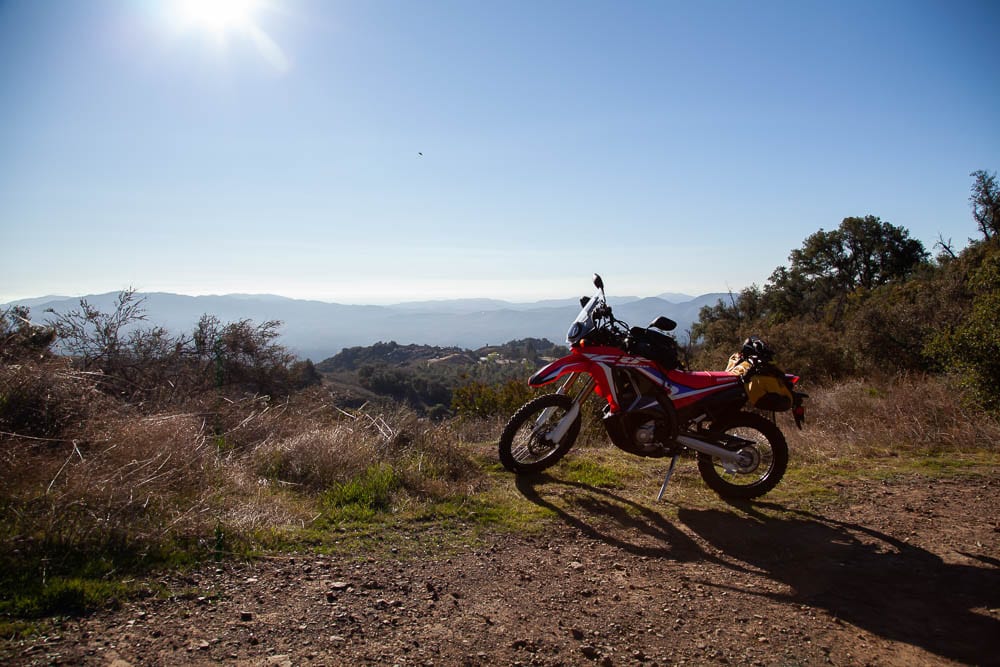 The mission here is clear. Bridge the gap between dual sport and adventure riding by creating a bike that’s highly capable off-road without sacrificing too much on-road comfort.

Traversing tarmac, the CRF250L Rally performs better than it has any right to. It may come from the factory with knobby tires but that doesn’t mean it won’t grip. Seriously, there seemed to be grip at any angle from tires that looked more at home in the mud.

Out the gate, the little CRF was confidence-inspiring and had me riding like a yahoo the second I swung a leg over it. The wee little brakes, one piston out back and two up front do a fantastic job of bringing the bike to a halt despite their size. The wet weight of 341 pounds helps keep things manageable while right side up and retrievable when upside down. 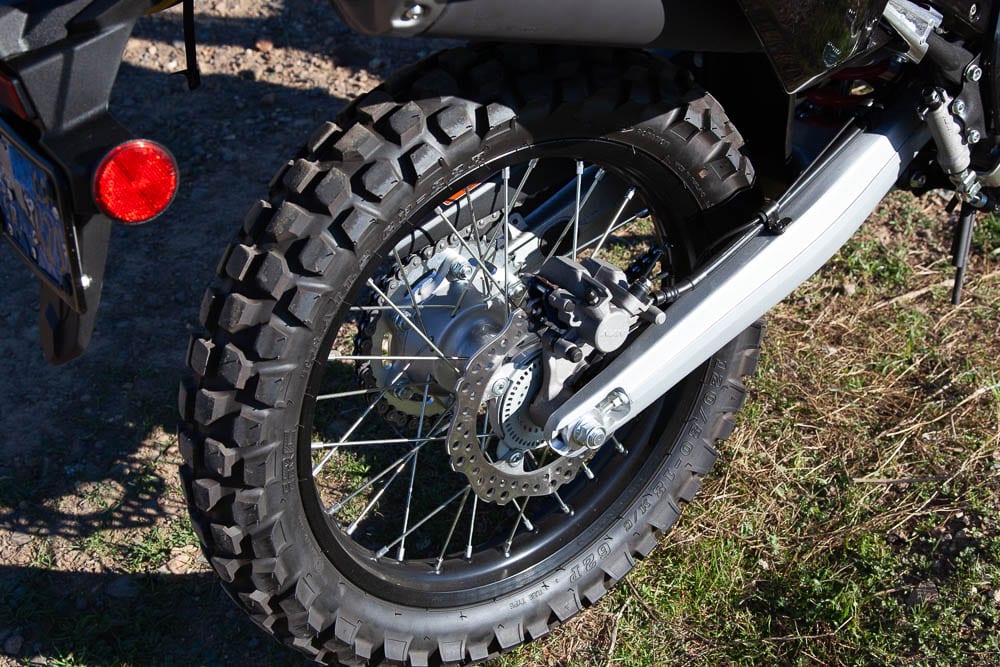 On the street, and in general, the suspension is comically soft. While I am a large individual at six foot four inches and 260 pounds, I don’t think this setup would have been suitable for someone half my size. While this negatively affects the feeling of the front end in corners it dramatically improves the comfort factor. However, soft suspension like that did not keep me from having some fun around the local traffic circle or parking lot speed bumps.

Even with the suspension wallowing over bumps like an old Chevy Caprice the little Honda was immense fun. Flying up Ortega Highway in Southern California I nearly had my knee down on a few occasions. Again, it all comes back to confidence. As a bike designed for entry-level riders the ability to build confidence and competence is key.

Equally important though, this bike is fun. Like really fun. It took about five minutes of seat time to completely understand why supermoto riders seem to be smiling all the damn time.

Now, this may surprise some of you, but I am no Ricky Brabec. That doesn’t matter here though because this bike is intended for beginners or those who just prefer a bit less displacement than the dual-sport giants out there. My scenario is one of the aforementioned beginner. I’ve been riding for five years and am just now looking to get into the dirt. So when I took the CRF250L Rally up to an area near the Wildomar OHV park I had a lot to learn about handling a bike offroad.

The first trail I hit was subsequently the hardest. I went down the hill first then turned around and came back up. The trail was a mix of soft sand, slippery exposed rocks, and sections of hard-packed dirt that were rutted out.

The suspension was compliant across the varying types of terrain, but the plushness made the front end feel a bit vague. Still, I was impressed with how the bike handled the terrain and elevation changes. With the rear ABS disengaged, the bike was easy to keep in control while navigating my way down the hill. 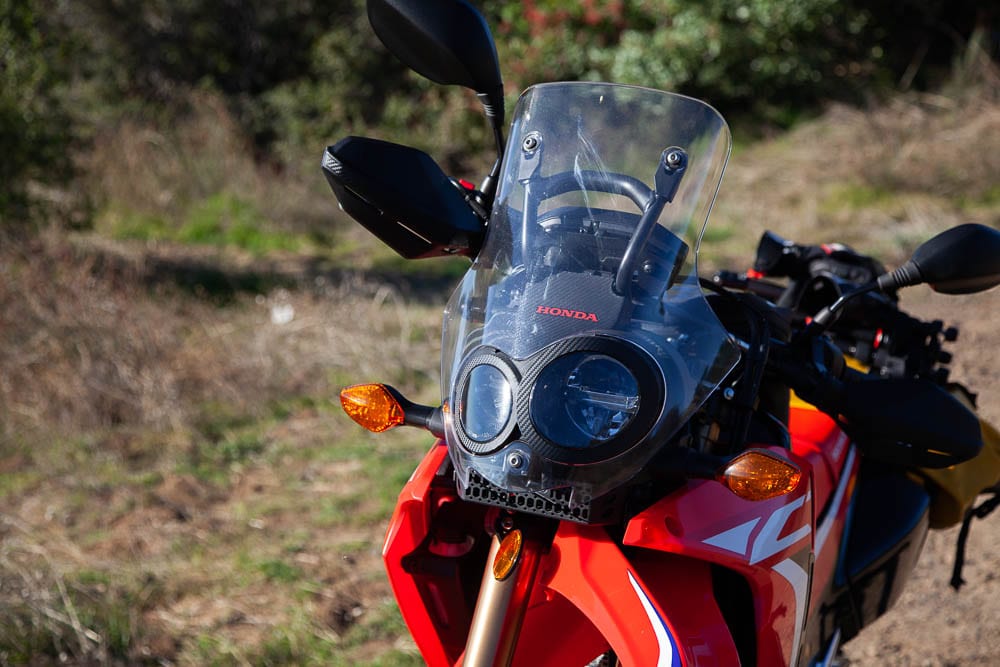 The short windscreen that had made the ride to the trail comfortable wasn’t too tall to see over. While standing I didn’t even realize it was still there. Overall, the Rally was easy to control both on and off the road. I did not air the tires down at any point, however, that may have been a good idea for my ascent back up the trail.

About halfway up I washed out in a patch of sand that was in one of the bends of the trail. Despite the bodywork and handguards being made of plastic, they held up well. While I still think a metal skid plate is in order, at the very least as an option, I can see why the Honda engineers are comfortable sending this bike offroad as-is.

A few scratches to the bike and a bruised ego were the most significant damage from the crash. If you’re learning how to ride off-road, this sort of thing is expected. Thankfully, the folks at Honda agreed with me after I apologized profusely for hurting their lovely little brap machine.

After lifting the Honda back on its rubber bits, it fired right up and continued up the hill happily. I would go so far as to describe the bike as chipper. It was reassuring to have the bike so eager to go after my mistake. And my own confidence wasn’t …completely shaken. When learning to ride, off-road crashes are basically unavoidable. Having a bike able to withstand those crashes is important. Honda’s famous reliability and durability are reassuring when you’re far from home.

After this, I kept to the old truck trails and fire roads that wind through the Santa Ana mountains.

Every time I took the Honda CRF250L Rally out I found myself smiling. I really did enjoy every moment with this bike.

Still, the bike isn’t without flaws. On the street, this mostly relates to the Rally being a dressed up CRF 250. It will surprise none of you that the highway is not the environment in which this bike. I sat on the highway for multiple two to three-hour stretches. Despite only being a 250cc engine the bike will cruise at 70 or 75 miles per hour. But at highway speeds, the vibrations, and the thin seat will certainly cause posterior pain. Additionally, the small fuel tank is somewhat of an issue. While the bike is economical, I was averaging around 130 miles out of the 2.7-gallon tank, the little motor works hard on the highway.

This is where the idea of a small displacement adventure bike begins to falter. I am aware of the fact that you don’t have to take an adventure bike on a cross country or around the world trip to enjoy it. That capability is, however, part of the appeal, and riding this bike over long distances is going to be more fatiguing than a larger one. 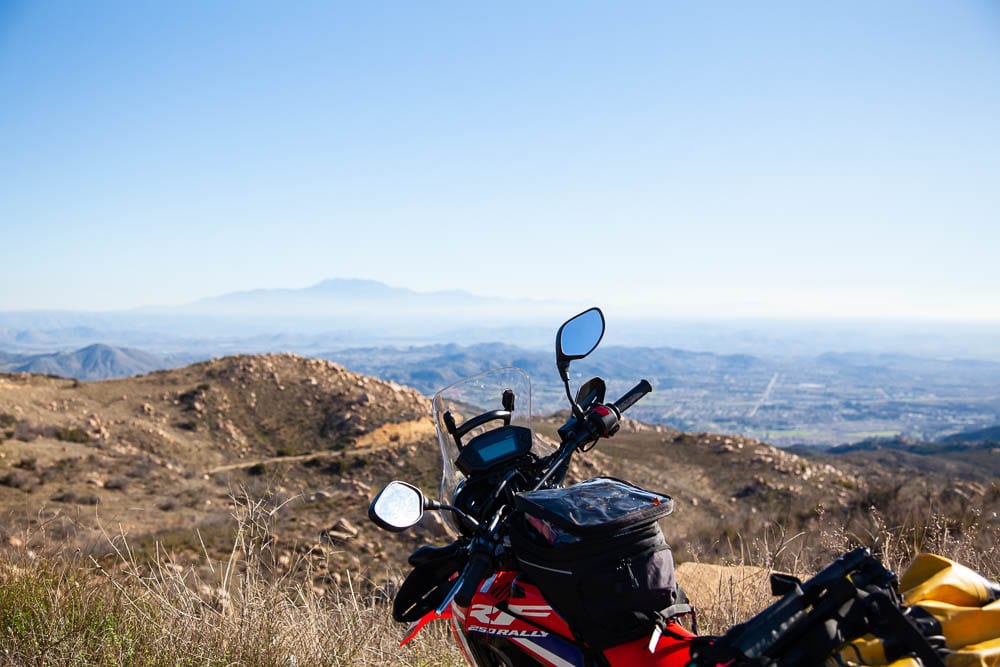 The CRF250L also lacks a lot of the comfort of a larger adventure bike out of the factory. Its diminutive size means a narrower saddle, but that makes for a more slender bike to take offroad.  This is the balance that dual-sport bikes face, and this is the main reason I question calling this bike an adventure bike.

Who is this bike for?

This bike is not the miniature adventure bike you want, but rather the ultimate dual sport. The Rally’s fairings and windshield do a fantastic job of blocking the wind even for a big guy like myself. The ABS worked perfectly. On the street, it did not interfere when riding spiritedly and in the dirt, it can be toggled off. The rear fender has supports built-in and lash points for gear storage, no rack required. 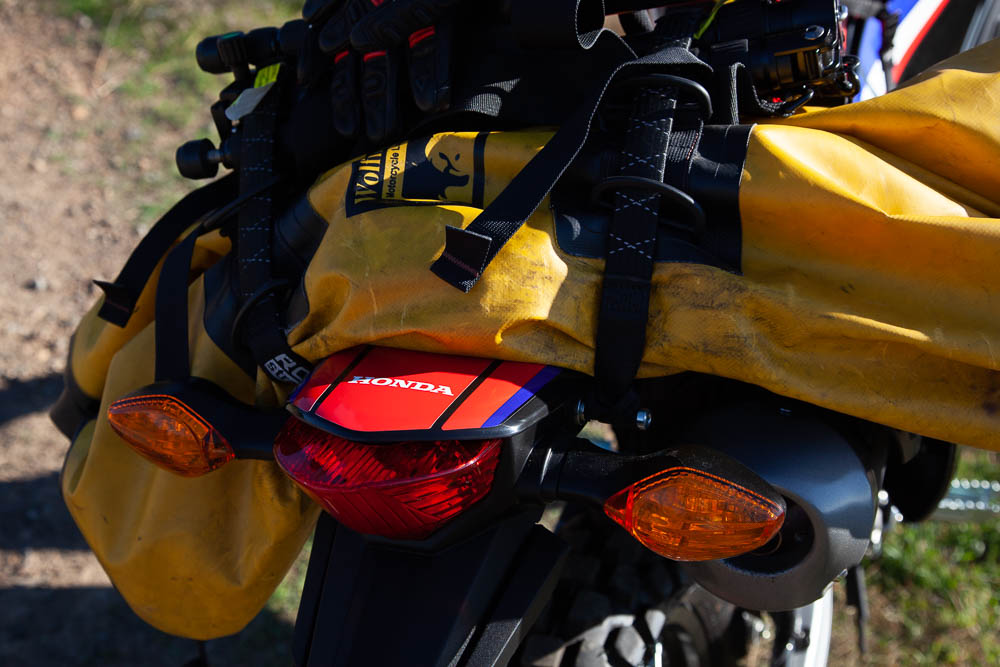 All of these practical features plus the amount of fun that I was able to have on this bike tell me one thing. Whether you’re a beginner or a seasoned rider you will have a good time on this bike. If you need a single bike to ride to and from the trails, you will be hard-pressed to find a better choice.

If you want a bike to get into dual sport riding and need it to be as good on-road as off then this is the bike for you. It may be designed with entry-level riders in mind, but riders of all skill levels will have fun. This bike isn’t perfect, but then again a perfect bike doesn’t exist.

Instead, this bike takes the idea of a dual-sport machine to its logical conclusion – something that is at home offroad but won’t torture you while getting there. The aftermarket has a solution for each of the quibbles I had with the bike. So for those with the interest in taking their CRF250L Rally into more punishing situations the support is there.

More importantly, the little Rally taught me that the CRF450 Rally I’ve been hoping for NEEDS to happen.

[Disclaimer: Honda tossed us the keys to the CRF250L Rally and included a tank of fuel. And they didn’t scream at us when we dropped it in the dirt. Sorry again, Honda… ]

About the Author: Matt Formica

Matt is a photographer, who enjoys riding motorcycles and the great outdoors. Instagram: @Mattformicaphoto