The jack stand recall is… tough.  Especially when it’s compounded by replacement jacks stands failing. This looks bad because it is bad. But I’m here to say that Harbor Freight is still a good company, and it’s a great place for gearheads and DIY fans to continue to shop. And I’m saying this as an unopened box of recalled jack stands sits in my garage next to me. 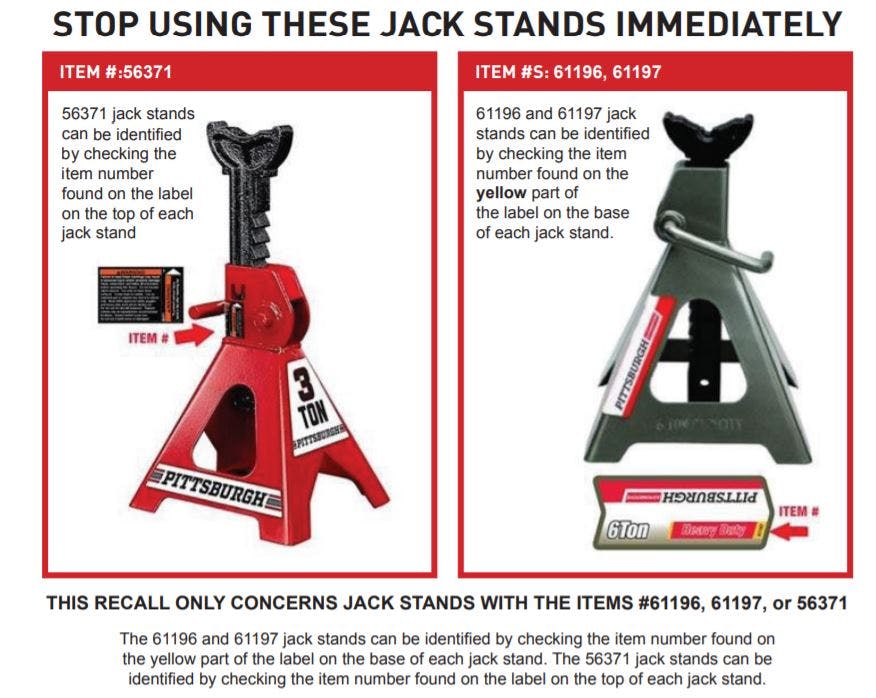 Add to that image above, jack stands with the SKU 56373. There’s a small welding defect that’s been discovered and it means that batch is bad as well. Harbor Freight CEO Eric Smidt addresses this in a letter he just emailed to, I’m guessing, quite a lot of people. How can I say a company is good when it’s pumping out crappy jack stands?

Harbor Freight has been a company that’s honest about its equipment from day one. The company was founded when Eric and his father started a small mail-order tool business that essentially cut out the middleman and was able to offer tools at a lower price. Yes, that means most of the stuff you’re going to find in a Harbor Freight store comes from China. Guess where a lot of your fancy, more expensive brand-name tools are also being stamped out.

I believe that Harbor Freight is a great source for lots of tools, storage, and many other pieces of garage gear. Especially for those of us wrenching on a budget. There are definitely tools and equipment where you should exercise caution, do research, and spend more money. This is clear, especially with the jack stand issue. Any piece of equipment where you trust your life to it requires spending the appropriate amount of money for the good stuff. For very nearly everything else, Harbor Freight has got you covered.

Beyond the stuff in the store, Harbor Freight employs a lot of people. There’s a location everywhere. And the reviews of the company on its Glass Door profile reveal strong marks for both the company and the man in charge. And speaking of Eric Smidt specifically, he’s gone from an orphanage to a billionaire. No, I don’t want you to weep for “the brands” or “the billionaires”. Hell no to that. But Eric is actually a self-made man. And he uses a lot of his money for good. In 2013, he directed his company to create a Tools for Schools program in Los Angeles. That program saw $1.4 million worth of tools and equipment sent into the LAUSD. And those were Harbor Freight tools, so that is a lot of equipment. Smidt donates to programs that support homeless veterans, vocational schools, the American Red Cross, and more. In fact, Smidt’s foundation donated $50 million to the Cedars-Sinai Medical Center. That’s the largest single donation ever received at Cedars. And in the face of our global pandemic, Smidt made his company donate all of its N95 masks, face shields, and nitrile gloves to in-need hospitals.

The jack stand situation is shitty. Of this, there can be no doubt. But I don’t think it’s time to write off the company in its wake. Go return your jack stands, but keep eyeballing that mailer for the crazy good deals on a ton of other stuff. And yeah, they’ll probably throw in that same damn LED light you get everytime you buy stuff there too.