Aston Martin ventures into eSports with their own home simulator

The motorsport world, like everything, was shaken up this year by the pandemic. But it at least had a unique chance to continue to entertain through the vast world of sim racing. During that time we saw many professional drivers trade their race cars for sim rigs – some basic home setups and some professionally-built behemoths. Even though real life racing is back by now, that hasn’t stopped Aston Martin from having a go at this whole sim rig thing. It’s been done exactly how you’d expect from Aston Martin – with passion, elegance, and a shit load of carbon fiber.

They call it the AMR-C01 and it promises “the ultimate in luxury Esports experiences”. It’s a home simulator which will be produced in limited numbers and sold to anyone willing to spend £57,500 ($73,735) on a sim rig, which is more people than you’d think. They won’t have any problems finding people to buy the 150 hand-built units they’re planning. To make it a reality, Aston Martin partnered with Curv Racing Simulations from the UK. Curv is a manufacturer of racing simulators founded by three-time Le Mans-winning Aston Martin works driver, Darren Turner. With Aston Martin’s design prowess and some race car data and Curv’s expertise in simulators, they created something truly over the top. 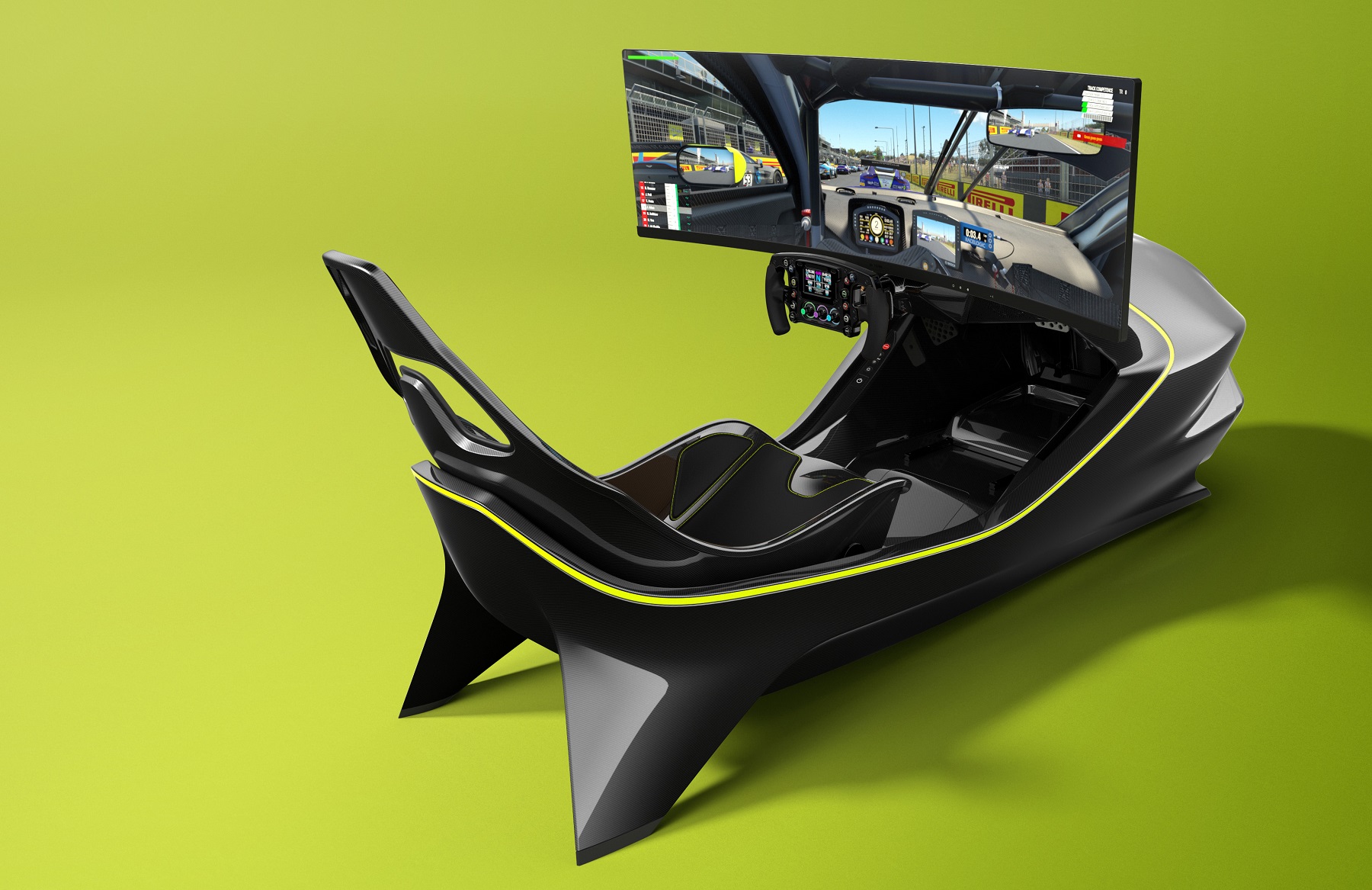 The AMR-C01 is built around a carbon fiber monocoque and has a seating position which mirrors that of the Aston Martin Valkyrie. I guess that’s one way to use those leftover monocoques from the cancelled Valkyrie Le Mans Hypercar program… too soon? That seat is also carbon fiber and can customized with various trim options.

It’s more than just good looks though. They packed it with high quality racing sim gear, some of which may be proprietary equipment. No brands were mentioned but some of it looks familiar. They say it has a steering motor which is “the gold standard for high-end simulators”, which I presume means a direct drive setup. Attached to it is a formula-style wheel with carbon fiber paddles, an adjustable hand clutch, nine rotary dials, twelve push buttons, and a full color LCD display. To me the wheel looks like a variant of the Precision Sim Engineering GPX. 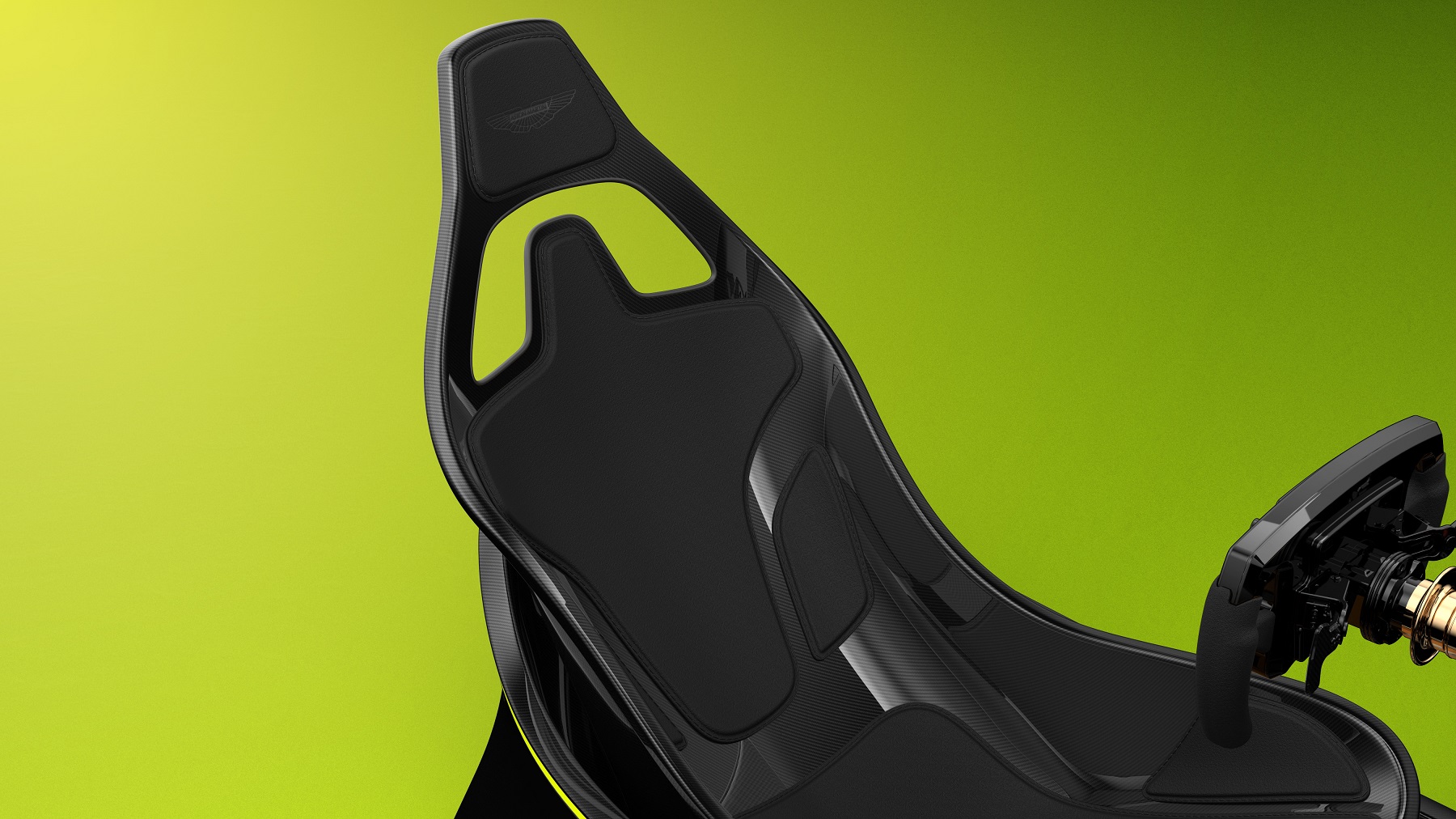 The pedal box is adjustable with up to 200mm of travel (electronically-controlled of course) and has a carbon fiber enclosure. There are internal speakers for an immersive experience and a Sennheiser headset so you can scream at the slower classes who held you up. The display is a super ultra-wide gaming QHD 32:9 aspect ratio monitor. It provides excellent resolution but more importantly the lowest possible response time and a high refresh rate. 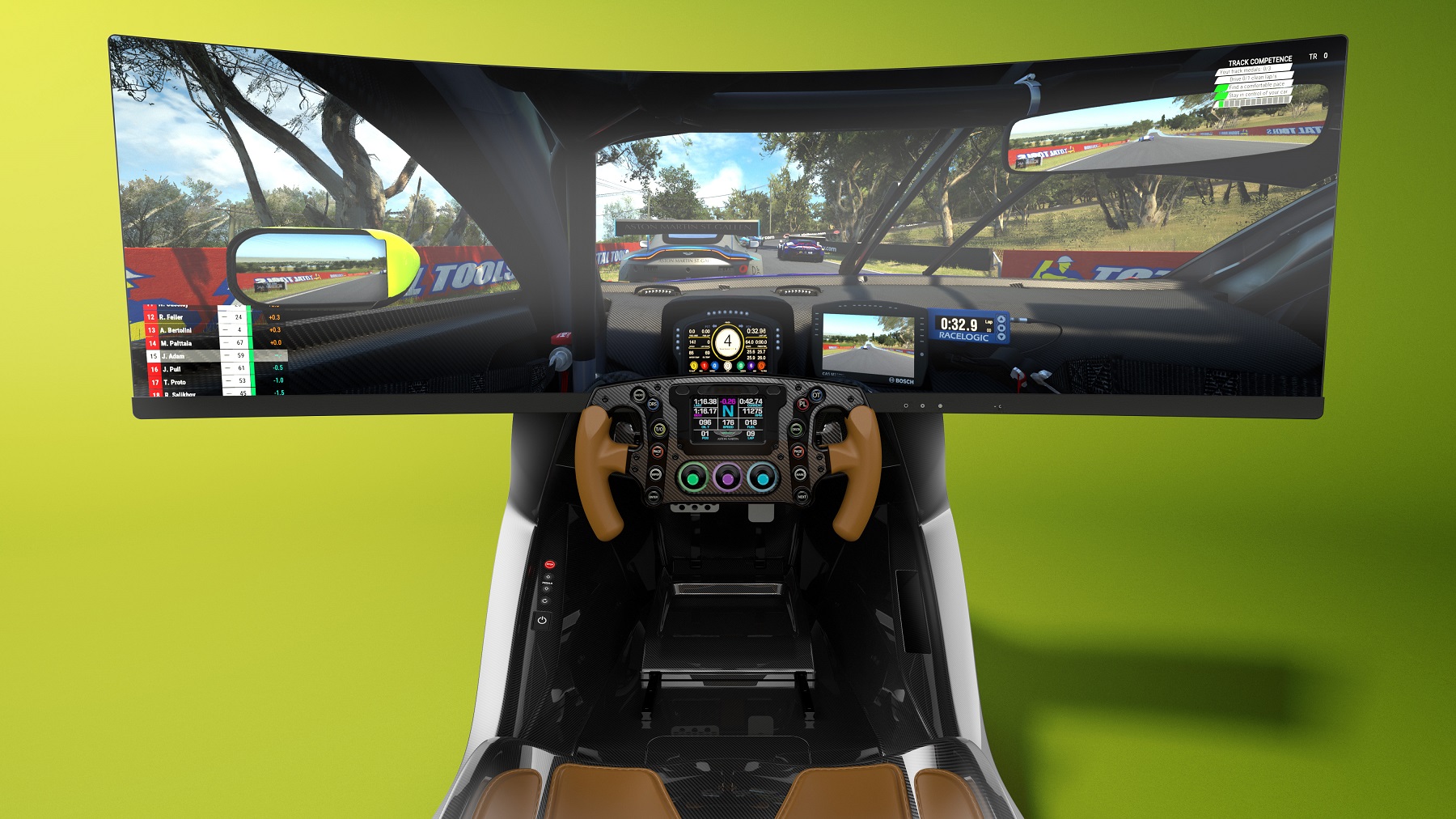 The software it’s running is actually a little surprising. The press release simply mentions that they’re using Assetto Corsa and the images show their latest version, AC Competizione. ACC simulates SRO’s GT3 and GT4 series with a wide array of cars available, including Aston Martin. What surprises me about this is that it’s a commercially available sim and not Assetto Corsa PRO, a professional-grade simulation that is geared towards manufacturers and race teams. AC Pro offers the ability for manufacturers to plug in their real race car data and create the most accurate simulation possible without having to build the whole program themselves. Given the price range, I would have expected the PRO version packed with some of Aston’s exclusive race cars like the Valkyrie and Vulcan. But it’s hard to do the whole eSports thing on an exclusive copy of AC that few people have access to.

It was also not made clear if you’ll have the ability to install other sims as well. I would assume so, but maybe they don’t want you desecrating it with Project Cars 3. 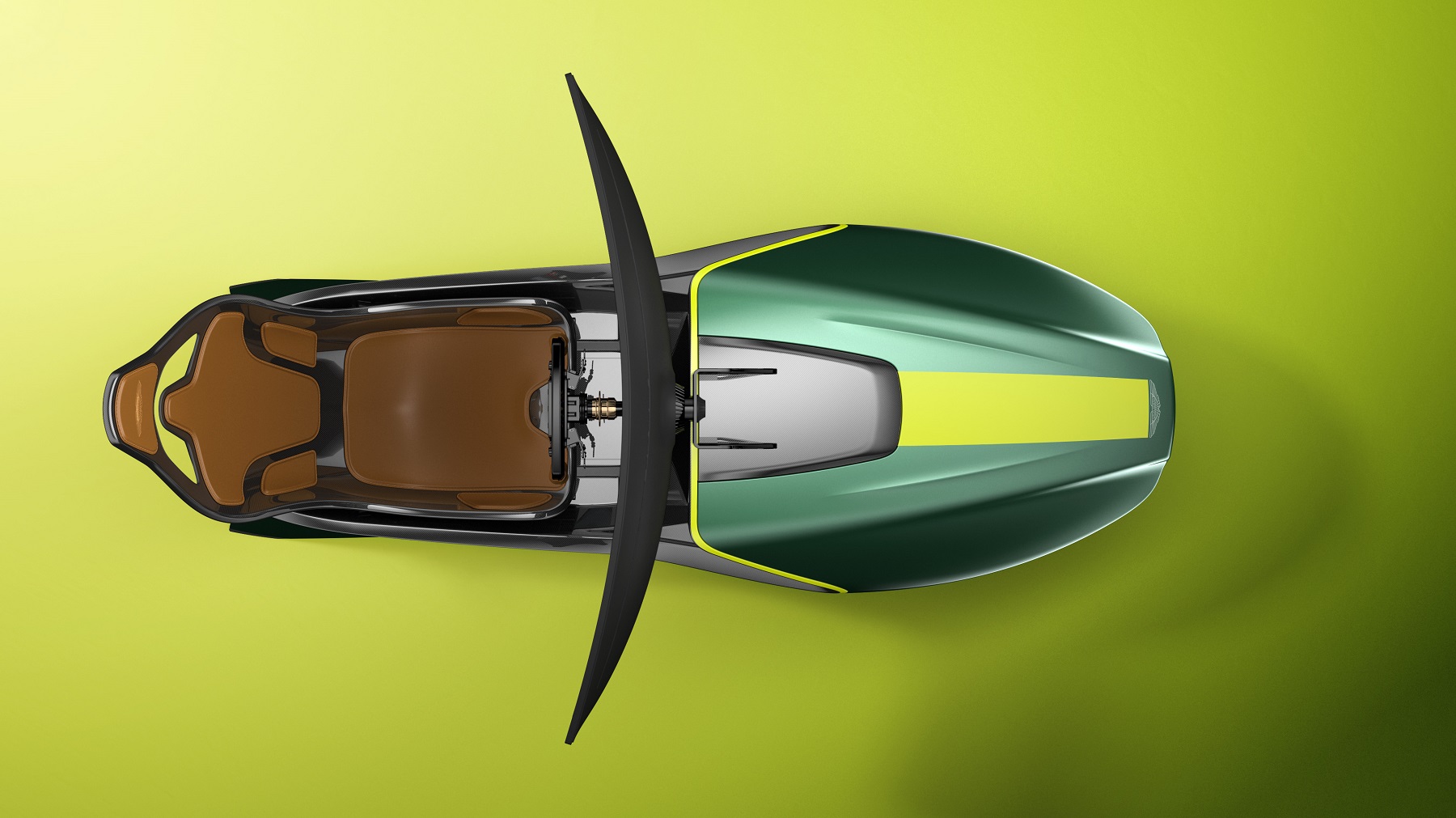 For the love of sim racing. Darren Turner is no stranger to this crazy little world and was certainly spending time in the sim with the rest of us during the lock down. Whether you like sim racing or not, it was thrust into the spotlight this year, so someone at Aston Martin or Darren Turner himself saw a golden opportunity. Of the AMR-C01 project, Turner said:

The AMR-C01 is all about the love of racing. We’ve created a home simulator with incredible immersion that offers users the opportunity to have a great time racing in the virtual world, from the comfort of their own home. Our goal was to create a simulator that provided as much enjoyment in virtual reality as real racing does. Racing cars is a lot of fun and it is great to see that with the growth of Esports racing, more people are now getting involved.

With only 150 of these being sold at around $73K, Aston Martin surely isn’t in this for a quick and easy cash grab. It’s clearly a lot of money for a sim rig with only one screen and no motion, but it’s by far one of the prettiest setups I’ve ever seen. They too see a value in sim racing and saw this as a very on-brand way to get involved. Though they could’ve made it a little easier and just joined iRacing like Corvette Racing did recently.