About a decade ago one of my podcast co-hosts, the infamous Roundabout Show’s own Craig Cole (now with Roadshow), and I attended a local ride and drive of a previous generation Hyundai Tucson.  He kept referring to it as the “Tuckson”.  And damn you, Craig Cole, that has stuck in my brain so hard I have a hard time referring to it as anything other than that.

The second-generation Tucson was a solid vehicle.  No real complaints, however in this subcompact crossover segment, if you aren’t keeping things fresh, you are getting left behind.  And so we get the third generation of the Tucson this 2022 version tested here in Limited trim. 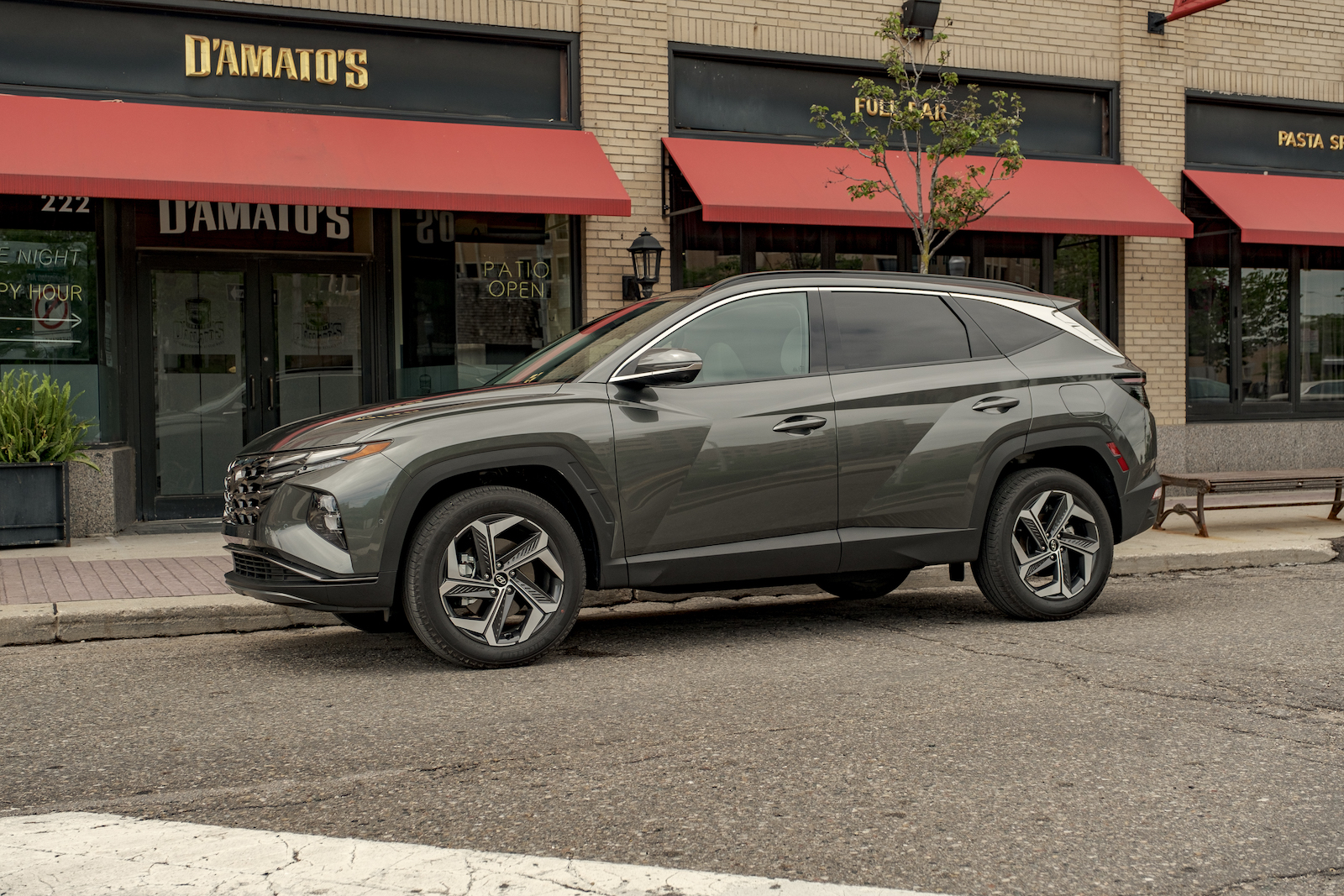 There’s no middle ground here. You will either like the front-end design of the Tucson, or you will not. Geek moment here, the front end reminds me of The Shadows from Babylon 5.

The segment seems to be going in two different directions at the moment when it comes to styling.  Either very soft, or aggressive.  The 2022 Tucson falls solidly into the aggressive styling camp.  It is not just the grill area that is aggressively styled.  Strong arches over both front and rear wheel wells give Tucson big shoulders and big hips.  There are other strong, hard lines along the profile that add to the look.

During the presentation by Hyundai in the section about design the gentleman presenting talked about how “the rear 3/4 view of the hatch area provides trust.”  Get the (explicit) out of here with that (explicit).  If you believe that looking at the back end of a family crossover makes a person give you trust, you are so deep in your echo chamber you are talking only to yourself!  What the rear 3/4 view really looks like is a highly styled family crossover, full stop. 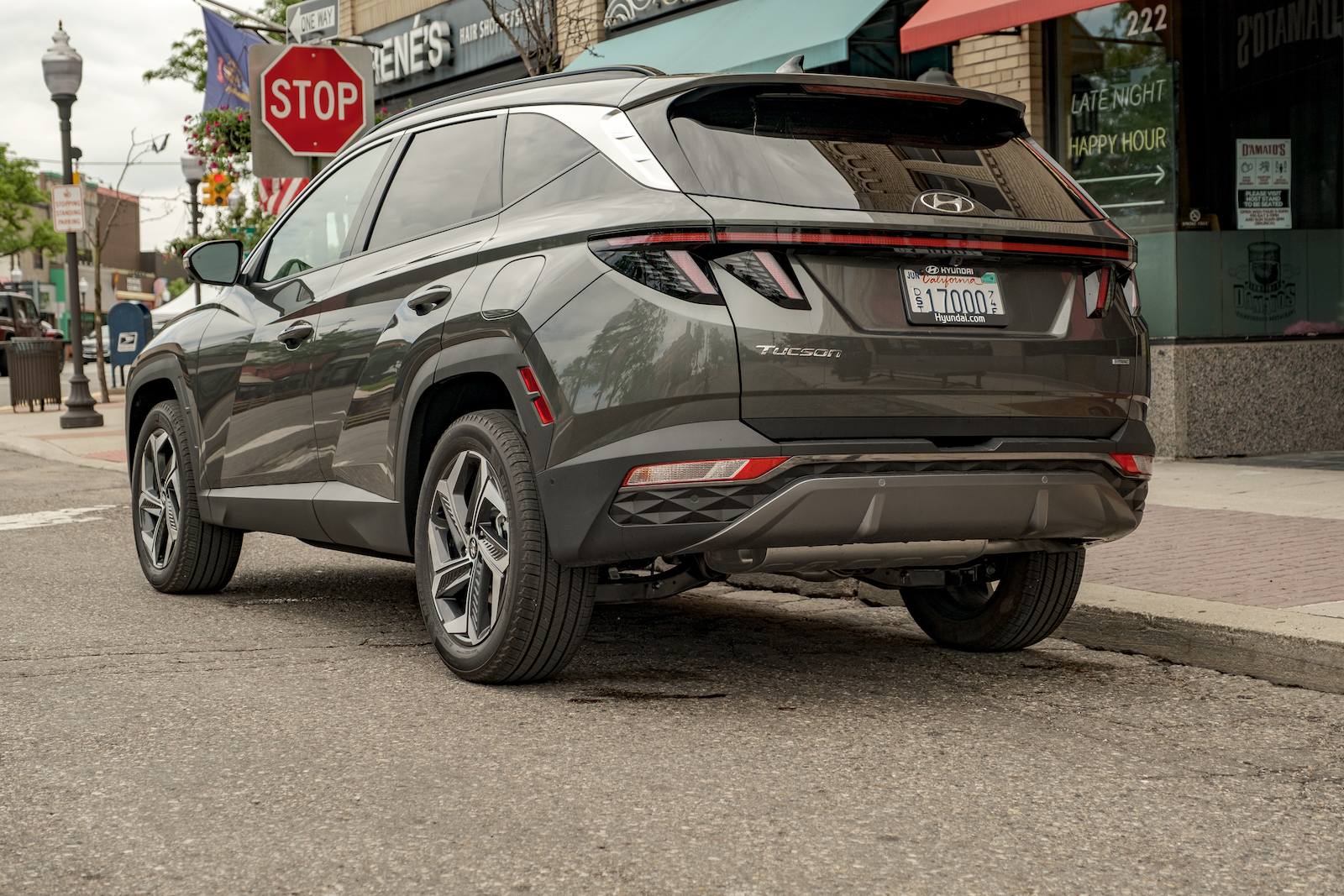 In Limited trim, the Tucson is a nice place to be.  Most of the materials are well done.  There is a nice touch of a fabric on the dash to contrast with the faux leather.  The affordability of the lower trim levels can be found with just a bit too much hard plastic in the lower sections.  The lower part of the doors can be forgiven, though lined pockets in the doors would have been welcomed in this top trim level. 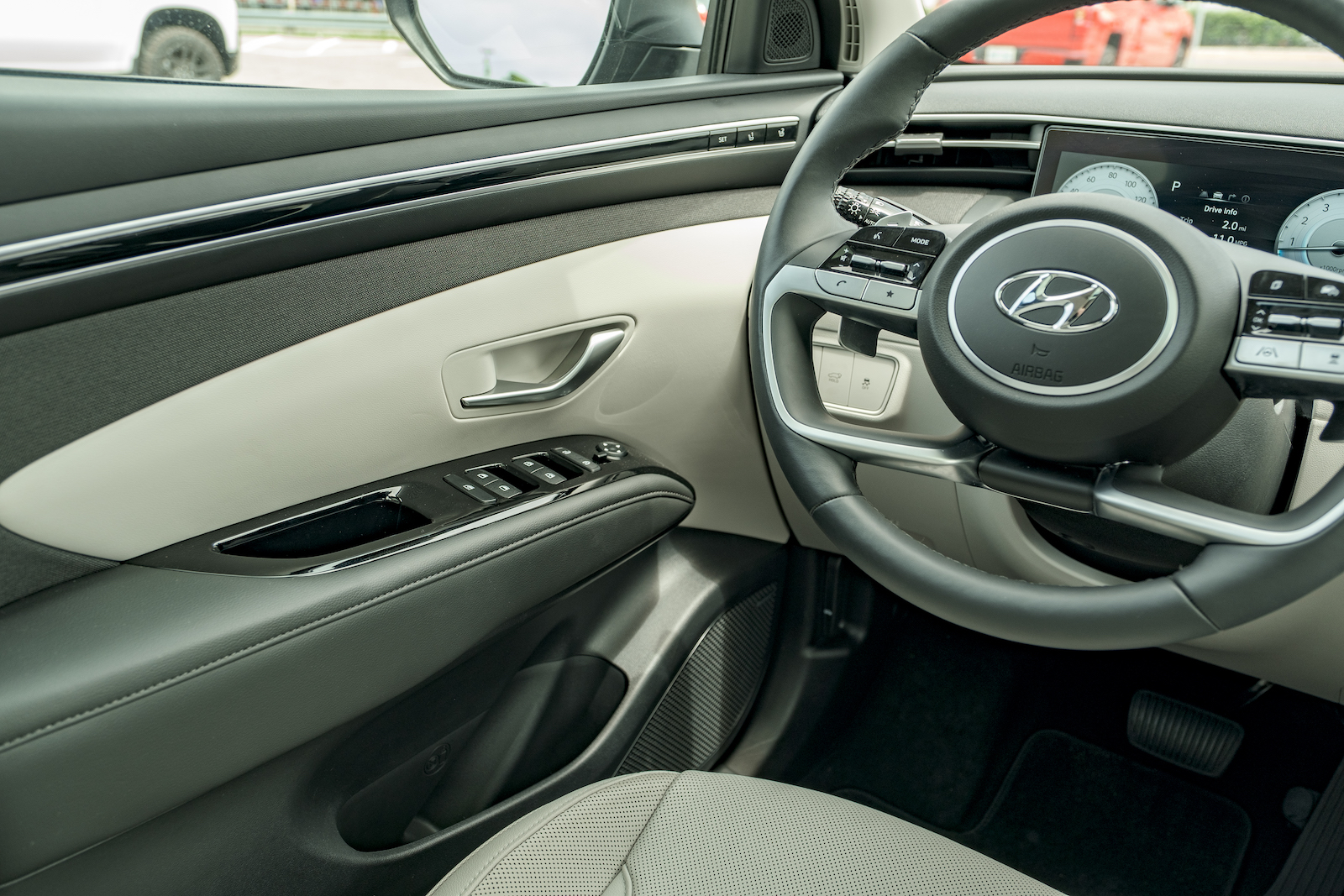 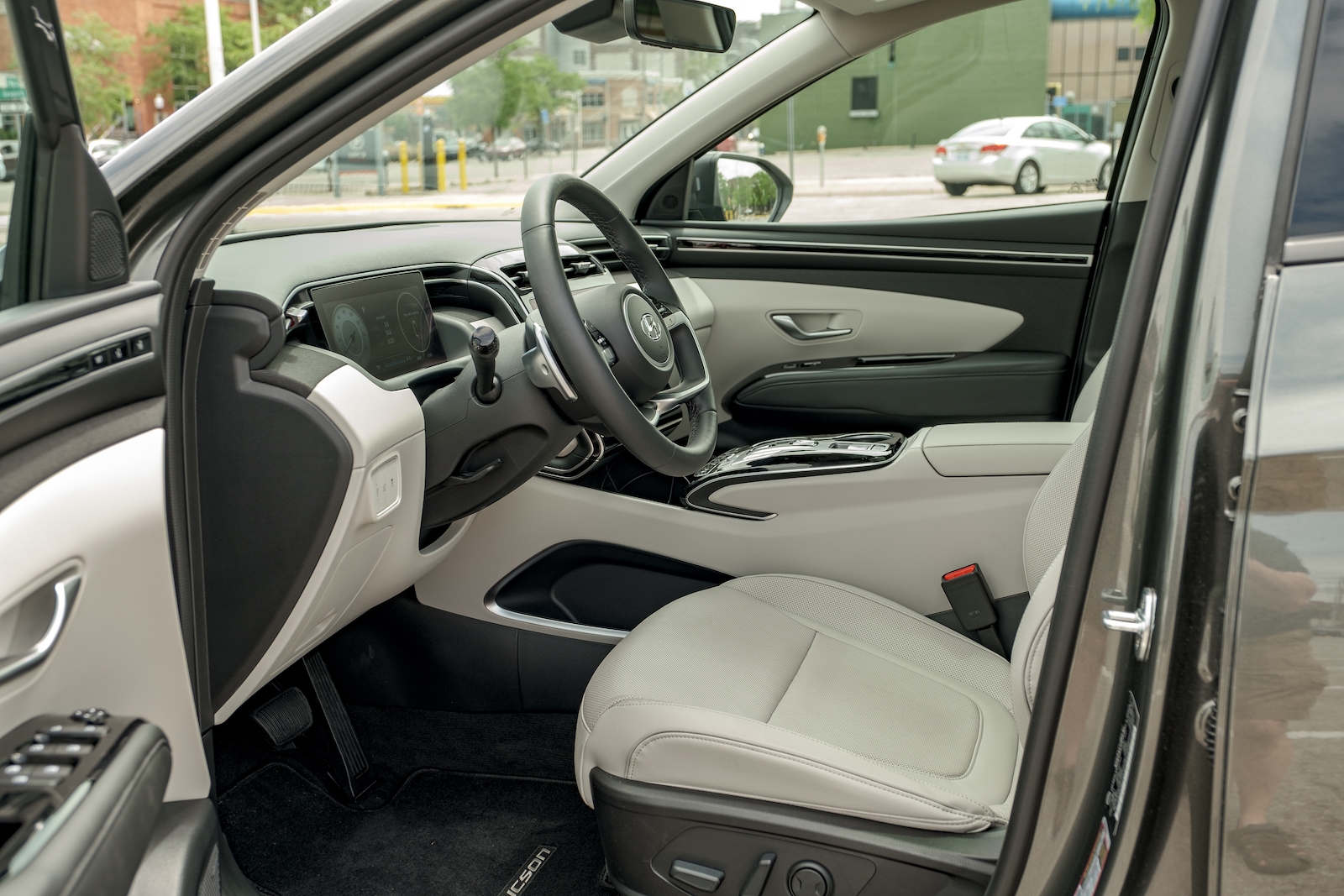 Where the hard plastic is most noticeable is on the sides of the center console where your knee tends to rest when driving.  It is hard and unforgiving.  A little less piano black trim on the center console would have been welcome as well as it shows fingerprints and smudges a little too easy.

The instrument cluster is a 10.25-inch display.  The subtle graphics on the tach and speedo give it a premium touch.  In fact, it very much reminds me of the look and feel of the instrument cluster on the Mercedes-Benz GLB 250.  It is easy and quick to read though I do wish the tach and speedo would have been a little larger as there was room on the screen to do so.  If not just a larger font would be fine. 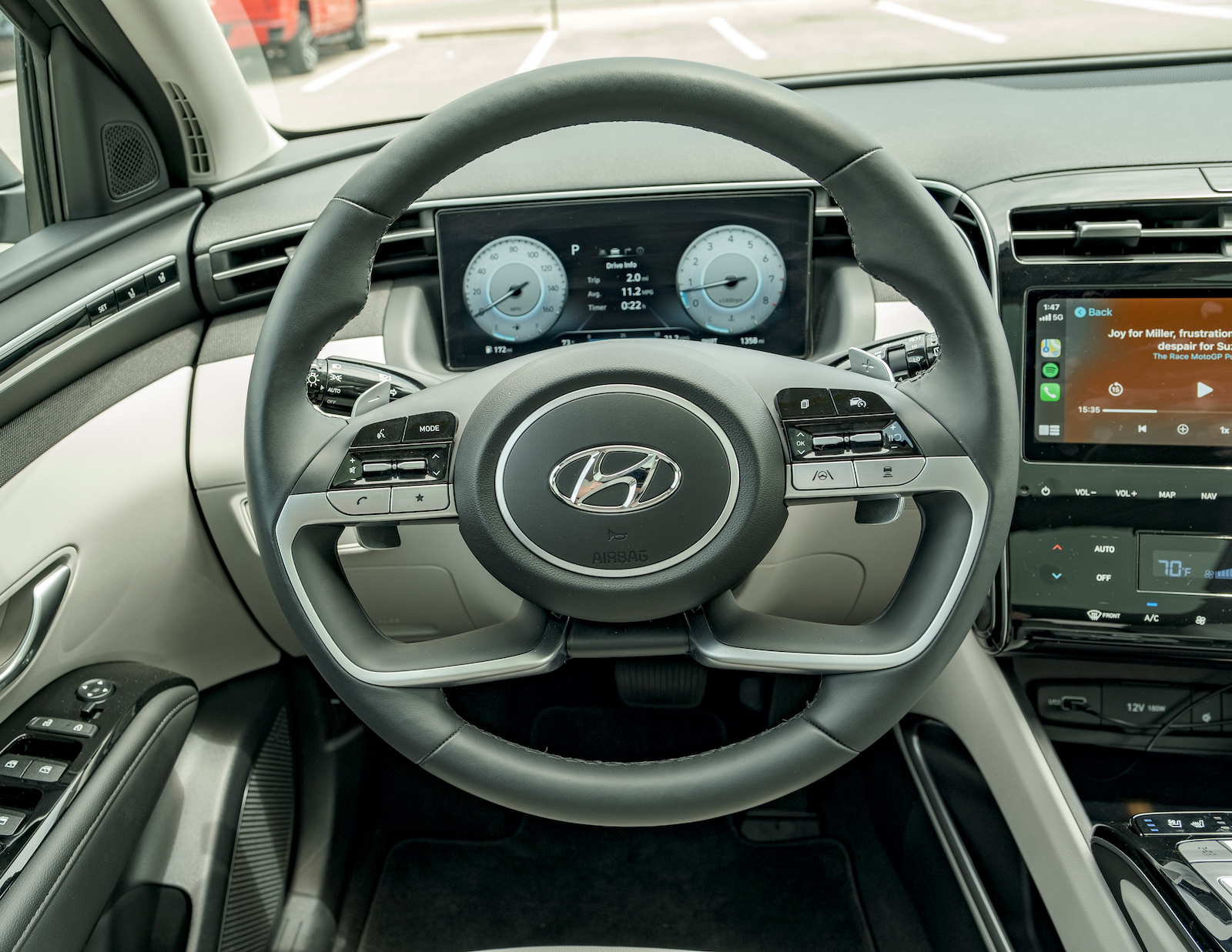 The seats were comfortable for the drives I did.  While I didn’t do one long trip, I did manage to put 200 miles of mostly highway driving on the Tucson in the three days I had it in for review.  The seats were both heated and cooled, which was a good thing I’ll touch on shortly.  The steering wheel is also heated.  Finding a comfortable driving position was not a problem.

The rear legroom was fine, I was able to sit behind myself at 5’10” with no issues.  The rear seats do recline, however, they do not slide back and forth.  A big item for me, the rear seats fold nearly flat!  This has become a rarity in the class, and as someone with two Irish Wolfhounds, something to pay attention to. 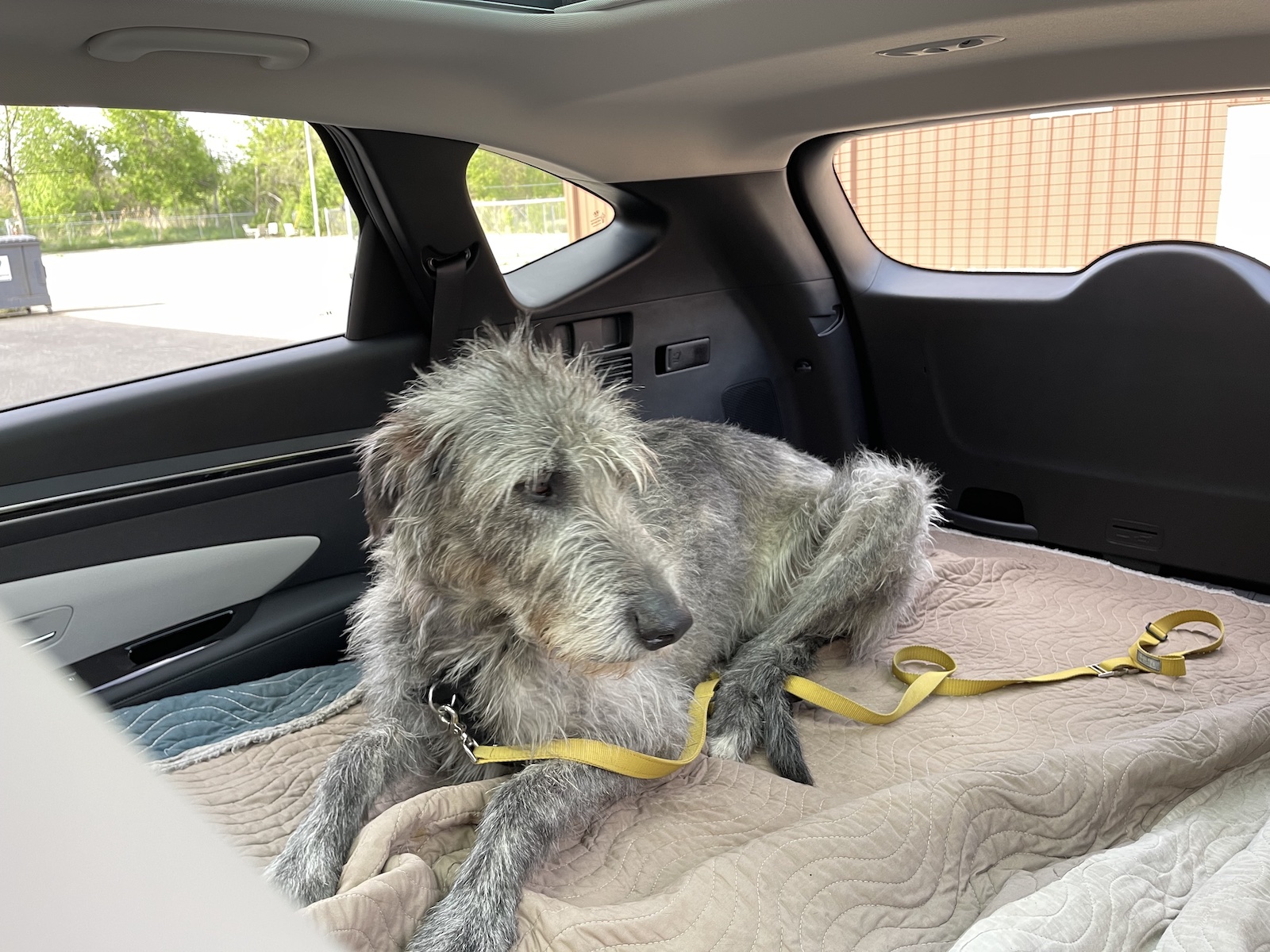 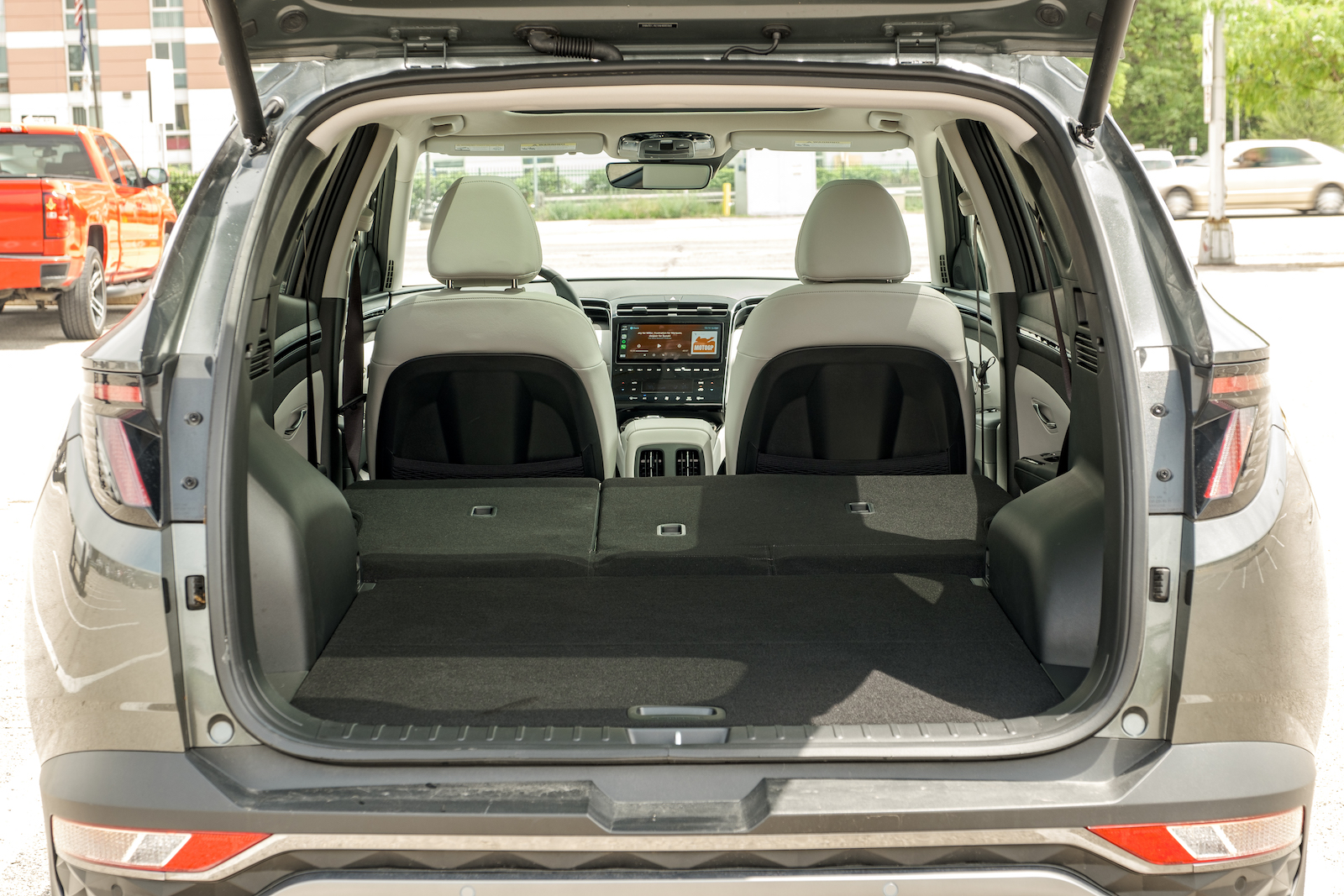 Safety, Infotainment and the contradictions

Forget the soapbox, I feel the need to reign fire down from a bully pulpit.  In Hyundai’s presentation, they spent considerable time talking about all the safety systems in the vehicle and how important safety as a concept was to them.  Yet, the infotainment and HVAC controls contain nary a single physical knob or button.  Given that, there is not a bit of haptic feedback provided either.

I asked this very question during the presentation. Hyundai tried to walk it back saying that consumers used the voice commands instead.  They threw out a number. Fifty percent of customers use voice commands for navigation or other items. The Bravo Sierra flag is flying stiff in a hard wind on that one.  I’ll give them this, the built-in system is better than Siri, but not by a lot. 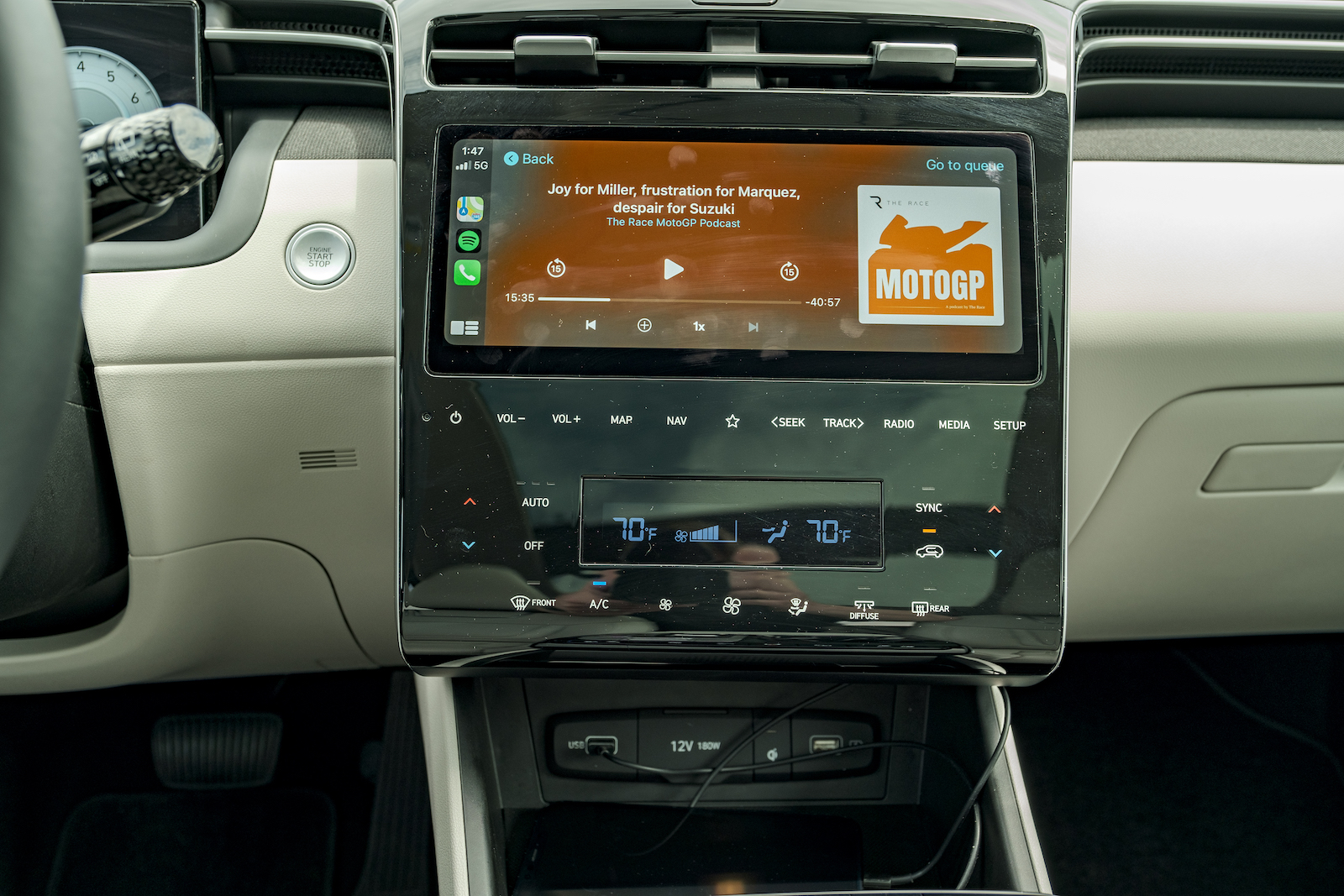 To be fair though, the touchpoints on the screen are large. And this is one of the more responsive factory infotainment screens I’ve used to date. Still, you have to take your eyes off the road to see what you are doing.  I’m not trying to single out Hyundai here as just about every OEM is guilty of this.

While all the safety systems employed here sound great, a handful of them get in the way and often.  Three levels down in the menu system you can get to a screen where you can disable most of them.  In some ways it’s not quite as bad as the Mazda CX-30 I drove last year, in other ways, it’s worse.  Let me name a few:

I’ve said it before. I’ll continue to say it.  If you are such a bad driver, or you are so distracted while driving that you need or require all these safety systems, call a taxi/Lyft/Uber/ride the bus, subway, or train.

Insurance lobbyist institutes and government regulations are beginning to require more and more of these systems for good ratings.  90% of what it does is add cost and complexity as well as make drivers even worse because they become lax with their attention. The money would be far better spent on higher standards and continued testing for driver’s training.

On the road, the Tucson is very good.  It provides a nice quiet and calm environment in which to pile up the miles.  The ride is well controlled, and there is very little road noise that comes through.  Thanks to the electric power steering, there is very little feel for the road or vehicle that comes through as well.  It’s not that it feels disconnected, more that turning the wheel is a suggestion to the direction in which you want to travel.

Power in this model comes from a 2.5-liter naturally aspirated four-cylinder producing 187 horsepower at a very lofty 6,100 rpm and 178 lb/ft of torque at an equally lofty 4,000 rpm.  This is backed by an eight-speed transmission.  Fuel economy is rated 24 City, 29 Highway, and 26 Combined. I saw right on those numbers in my limited time with the vehicle. 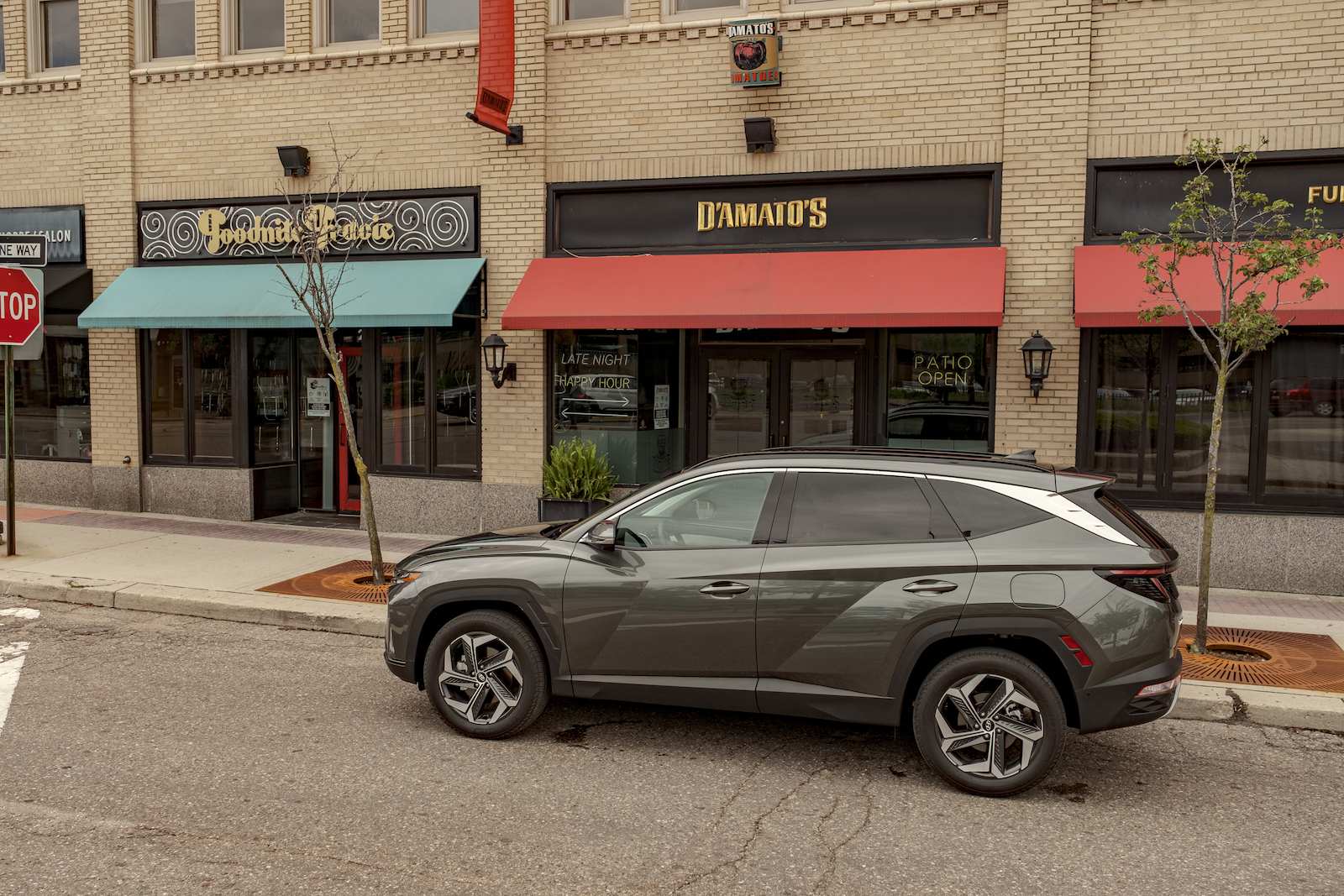 One thing you need to do right though is turn off Start/Stop if you are in stop-and-go traffic on a warm day. I’m not even talking about a hot day.  Once the engine turns off the fan will blow warm on you, not cool air.  At least on this naturally aspirated version. The hybrid and or PHEV may be able to run the A/C off the battery systems.

Spend the extra $1,500 or $10 a month in payment and get the Hybrid version.  Even though this is a large (for a four-cylinder) engine with a long stroke, the engine is underpowered for the vehicle and the lack of torque at all speeds is noticeable.  This is accentuated by the transmission which is ever so eager to upshift and very reluctant to downshift.  This was all with the drive mode selector in “Normal”.  If you’ve ever driven a car with very bad turbo lag, it’s exactly what it felt like. 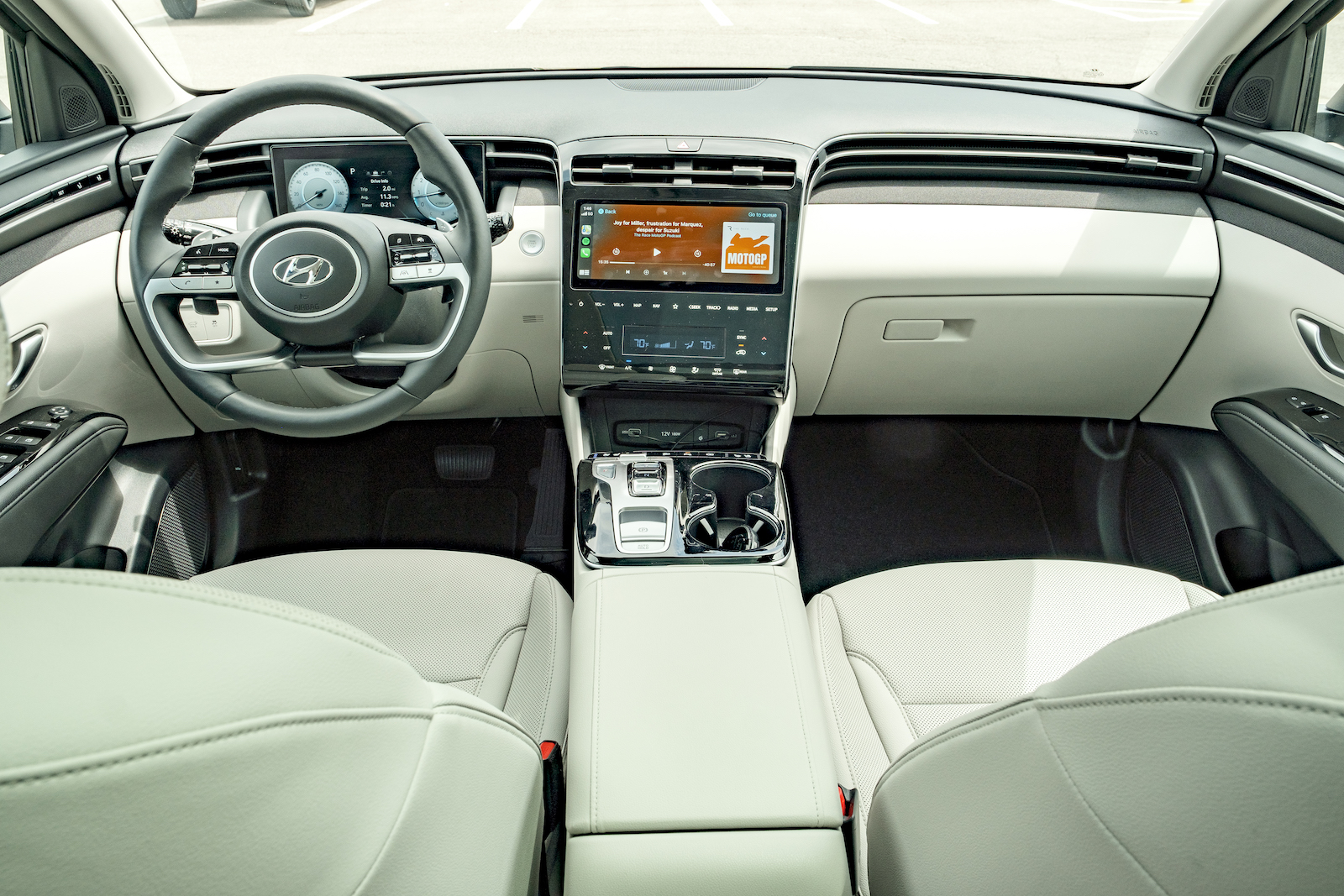 The additional low-end torque provided by the hybrid system will make a large difference in the driving experience. While the Hybrid and PHEV versions are down seven horsepower their power peak is at 5,500 RPM.  Torque is up to 195 though, and that number is available from 1,500 RPM all the way to 4,500 RPM.  The fuel economy will also get bumped to 37-38 mpg as a bonus.

The engine also turns far more RPMs at highway speed than I’m accustomed to in modern vehicles.  At 75-80 miles per hour on the highway, around 2,000 RPMs is standard.  The Tucson was closer to 2,600 or 2,700, though to Hyundai’s credit you would not have known that because you did not feel the engine working hard while at speed.

The audio system in the Tucson is now BOSE, where previously it was Infiniti.  The cliché goes, “no highs, no lows, must be BOSE!”  That is still not far from the truth.  Vocals are very upfront, and other midrange tones and instruments are accentuated.  The top end is rolled off, most noticeable when listening to cymbals as they feel flat and cut off, with no shimmer or sparkle.  The bass and low end are there, however it feels digital and artificial.  Be that electric bass, stand-up bass or kick drum or electronic drums.  Art Blakey’s Mosaic or Everything But The Girl’s Before Today are two good examples to illustrate this.  As for soundstage, it’s very flat and narrow.

It may sound like I don’t like the Tucson. That is not true.  While it may not set a new standard, or be the standard for the class, it’s right there.  It is among the best vehicles currently in the class.  And with Hyundai’s warranty, this should cost you next to nothing other and fuel and some oil changes to drive for many tens of thousands of miles.

If you are in the market in this segment, this should be either one of the first or last vehicles you drive.  It will leave that much of an impression on you.