As has been previously rumored, Ford is bringing back the famed Lightning name after nearly two decades. While it’s no longer a product of SVT with a short cab, supercharger, and rad 90’s styling, the new Lightning is arguably the most important F-150 ever. The Lightning returns, but as the first all-electric F-150. It will help lead the charge (so to speak) for the company’s EV revolution with smart tech, impressive capabilities, and a price point you won’t believe. And for us old school Lightning fans, it’s also the quickest F-150 in company history. Electric powertrain theme aside, it’s earned that name.

The way Ford has approached this is not much different than they’ve approached any other F-150, and that’s what makes it stand out. Ford designed the Lightning to be used and to serve its owners. It offers similar levels of payload and towing, has all of the same amenities and [way] more, and is… uh, just a truck. It’s not a six-figure fashion statement like the new Hummer EV is going to be and it’s not an unrealistic meme on wheels that the Cybertruck could be if it ever gets built (debuted in fall 2019 and has yet to be seen in public again). And while Rivian and Canoo have exciting and interesting electric pickup concepts, they are newcomers in what is a very difficult world. It’s too early to know if their offerings will sink or swim. With a manufacturer like Ford, you know your electric pickup is going to work as advertised and is going to exist. On that note, the Lightning’s production is scheduled to begin in Spring 2022. Provided the world’s microchip shortage is at least somewhat under control by then, here’s what you can expect.

What makes the Lightning strike 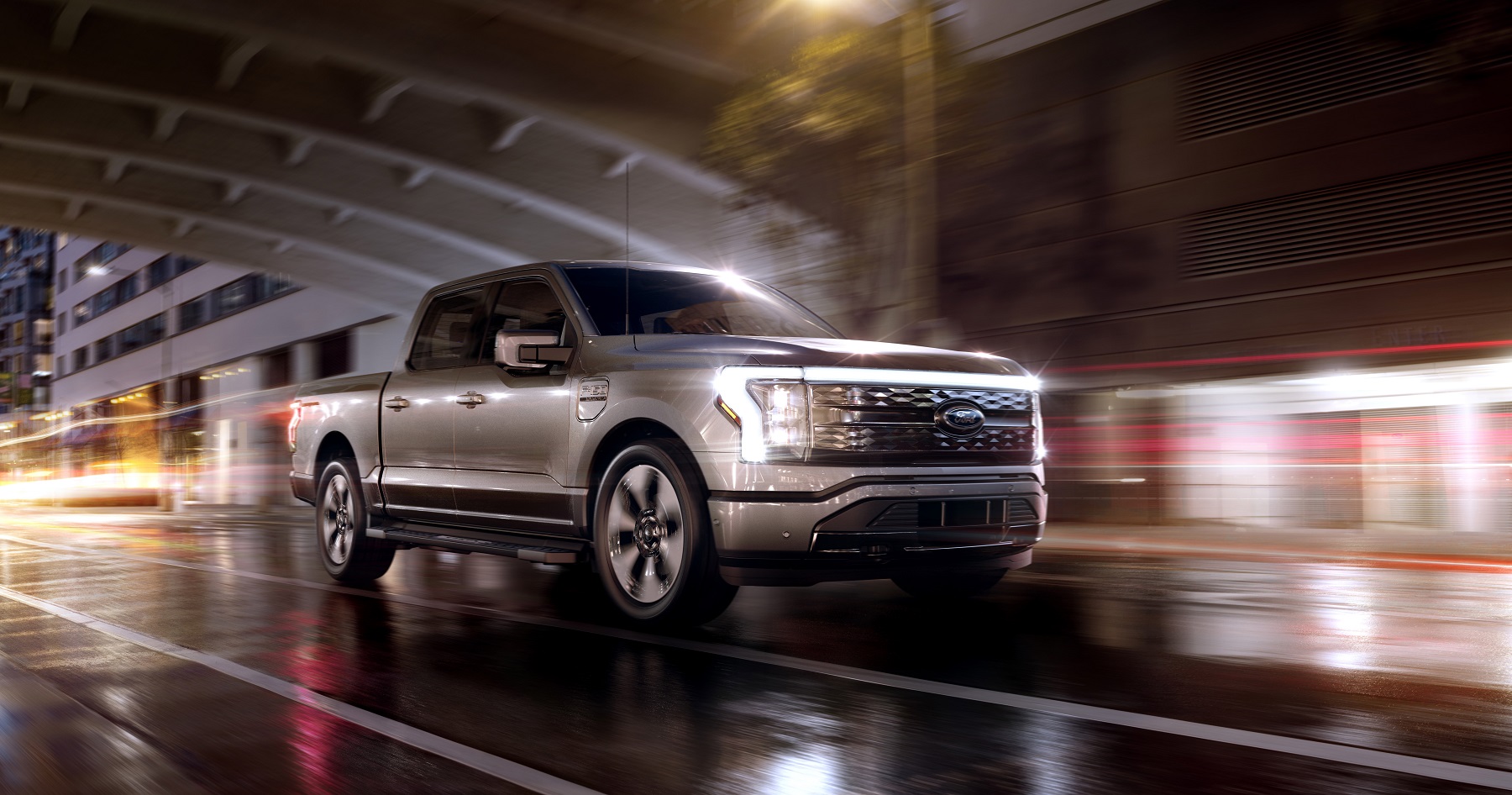 The Lightning is a SuperCrew four-door with a 5.5-foot bed and permanent dual-motor all-wheel drive. No other cab/bed configurations have been announced but I suspect those will come later. Underneath the body and integrated cleanly into the chassis is a massive liquid cooled lithium-ion battery pack in two configurations – standard-range and extended-range. Neither this battery pack or the motors that it feeds has been borrowed from other Ford EVs. Something like the F-150 needed hardware a little beefier than what is under the floor of the Mach E. For example, the motors are in-board and sheltered by metal skid plates (they shield the battery as well) so it can take abuse.

Its estimated payload and towing capacities are impressive even when compared to other F-150s. With the Standard battery, payload and towing are 2,000 pounds and 7,700 pounds respectively. Opt for the Extended-Range battery and payload is reduced slightly to 1,800 pounds but you get 10,000 pounds for towing. These numbers aren’t dramatically different than other SuperCrew F-150s. Some body/engine combinations offer more than the Lightning, some offer less. These numbers are a good middle ground. 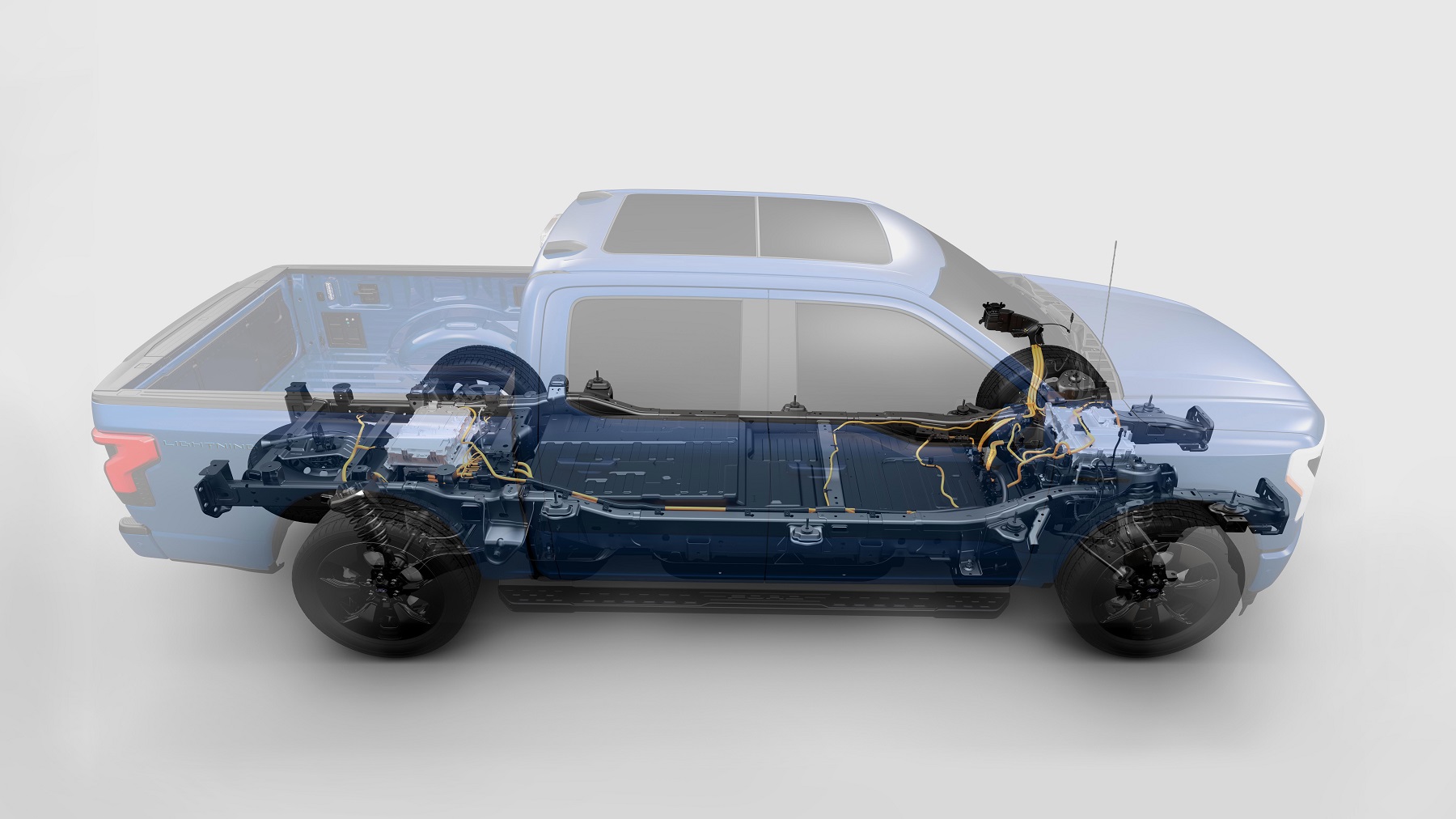 Battery capacities are unknown at this time but we do know that the motors are capable of some serious power. With the standard battery pack you’re looking at 426 horsepower and 775 lb.-ft. of torque. The extended-range battery pack has the same torque but increases power up to 563 horsepower. In its most powerful configuration, the Lightning is capable of a mid-four-second 0-60 mph time. 4.4 seconds is the number being thrown around after the President took it for a spin on Tuesday, which is only a couple tenths off what my Mustang GT is quoted at and I’m not at all salty about that.

It’s not just quick in a straight line either. For the first time, Ford has given it an independent rear suspension. This combined with its low center of gravity means the Lightning is the best-handling F-150 ever. With a drop and some wider, stickier tires it could be a stupid fun sport truck like the SVT Lightnings were.

While a sport variant hasn’t been announced, there will be a dedicated worker’s spec which will be revealed at a later date. This one is targeted specifically at commercial fleets and contractors who can take advantage of significantly lower operating costs plus many of the advantages the Lightning can offer. 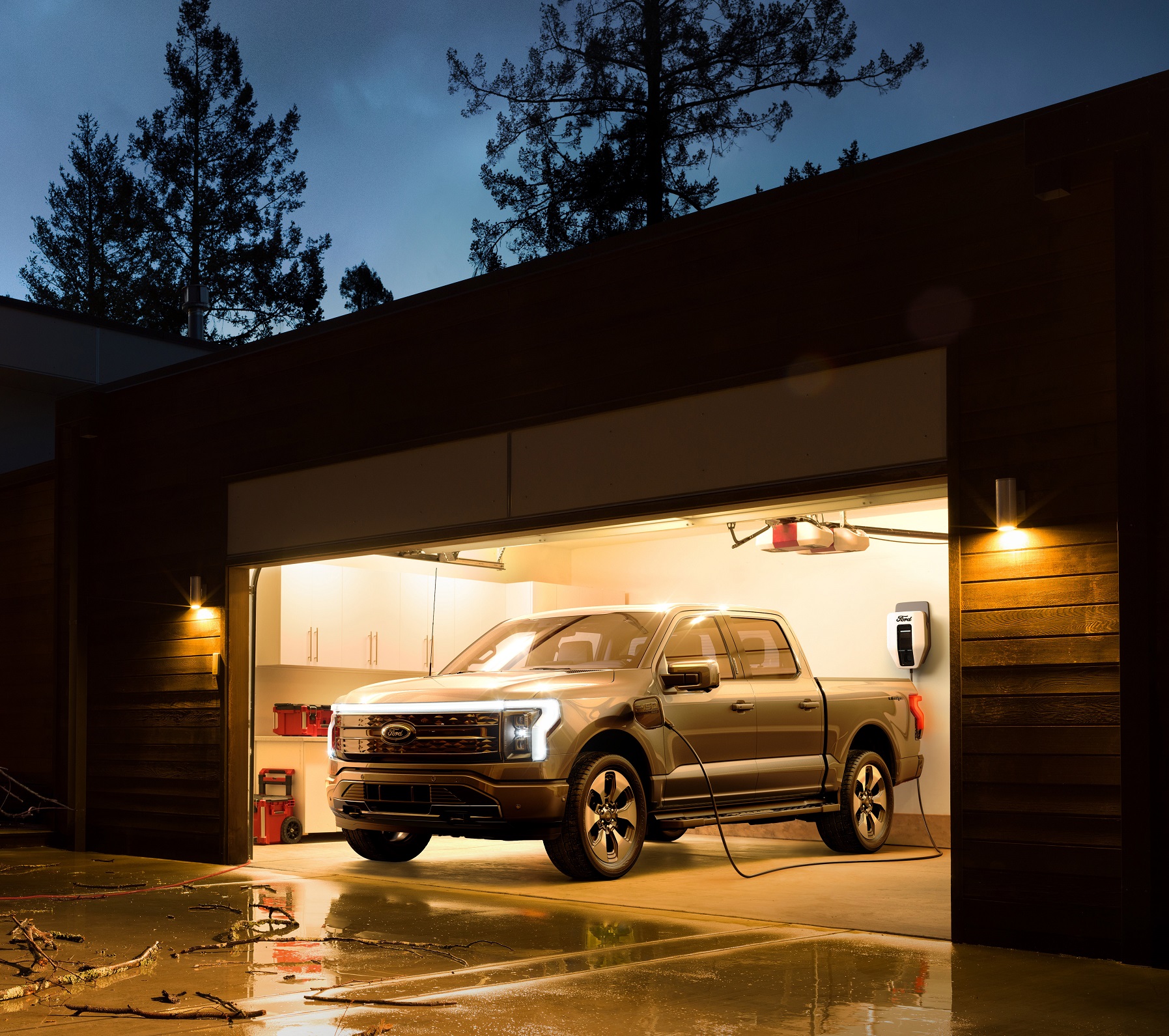 Driving ranges are not official, but they’re targeting 230 miles of range with the standard battery and 300 miles of range with the extended-range battery. Those numbers stuck out to me as a little underwhelming given how much battery capacity they could theoretically fit in something as large as a SuperCrew F-150. But trucks are big and heavy and adding electric components seems to make them heavier. And despite Ford’s attempts to make the Lightning more aerodynamic, it’s still the shape of a truck. But still, 230-300 miles of range is sufficient for anything short of a road trip.

The Lightning supports fast charging and offers an 80-amp home charging station and inverter as standard when you have the extended-range battery. That along with its class exclusive dual onboard charging system means you can add an average of 30 miles of range per hour. 15% to 100% takes about eight hours. Find a 150-kilowatt DC fast charger to hook up to and you can add 54 miles of range in 10 minutes and charge from 15% to 80% in 41 minutes. Ford has tried to make finding a charging station as painless as possible with the FordPass Power My Trip feature. This will identify charging routes before embarking to make sure you’re always within range of a public charger that will hopefully maybe work.

And if you’re at home but the home is what needs charging, the Lightning can help with that too. With the available Ford Intelligent Backup Power, you can offload 9.6kW of power to keep the lights on during a prolonged power outage. Ford says it can go for up to 3 days provided the truck is charged enough or up to 10 days if power is rationed. If you have this option plus the 80-amp home charging station/inverter, this will all be handled automatically. Just make sure the truck is plugged in and it will know when it needs to kick in to power the house. Once power is restored, it automatically goes back to charging itself. This backup power can also be used on the road by distributing power out of a total of eleven outlets. 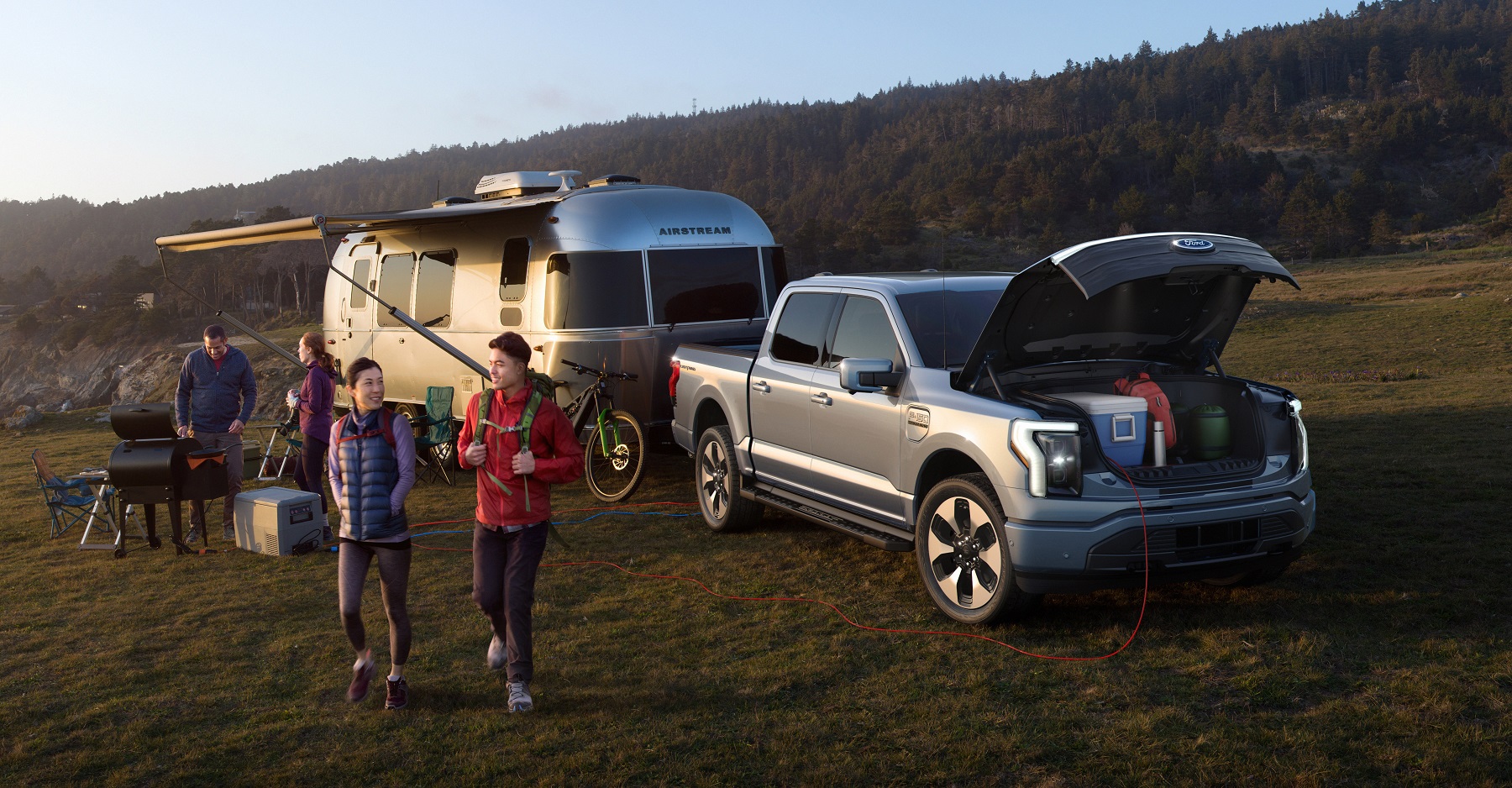 Lending to the Lightning’s advantages of “just being a truck”, it looks… like an F-150. Without analyzing it too intensely, the big differences in exterior styling come down to lighting, the grille, and low-drag wheel designs. Lighting elements at both ends are connected by a strong horizontal bar which runs across the full width of the vehicle. Three new grille designs are available and each will certainly take advantage of the fact that there’s no air-sucking engine trying to breathe behind them. Overall the design is mature, futuristic enough, and I think quite attractive. It’s enough to set it apart from other trucks without turning it into a shitty MS Paint drawing.

Oh, and the best part? There’s a frunk. Sorry, a “mega power frunk”. This storage area offers 400 liters/14.1 cubic feet of volume and 400 pounds of payload. It’s secure, water resistant, and powered. No longer do you need a hard bed cover for secure storage to be a thing on your truck. 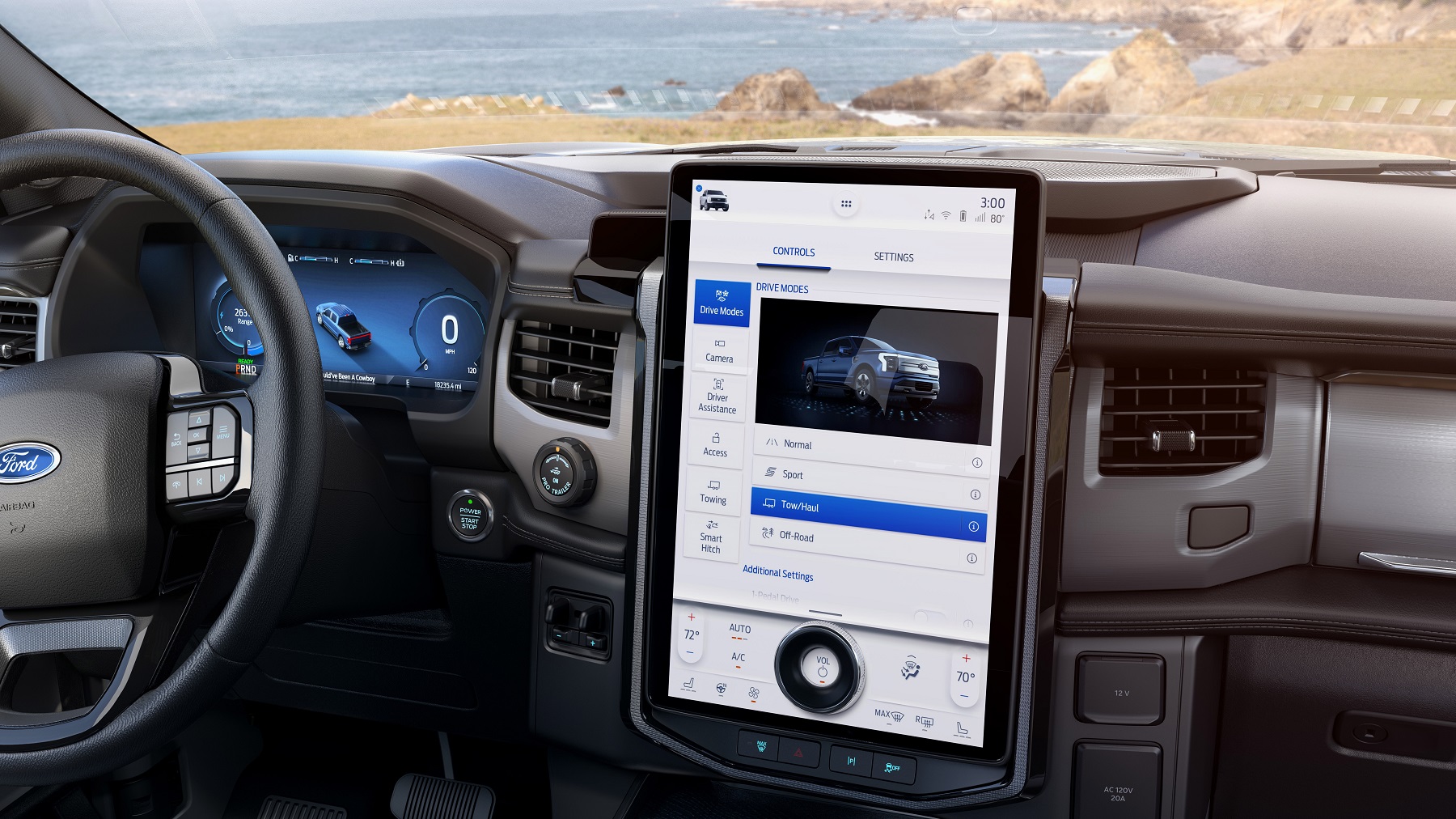 The cabin is equally modest. The newest-generation F-150 just got a dramatically improved cabin and the Lightning takes full advantage of it. There’s a fully digital 12″ instrument cluster but its party piece is the largest screen currently offered in a truck at 15.5″. It’s got all of the other amenities you could ask for in an F-150 with more being available the higher up the trim level food chain you go. 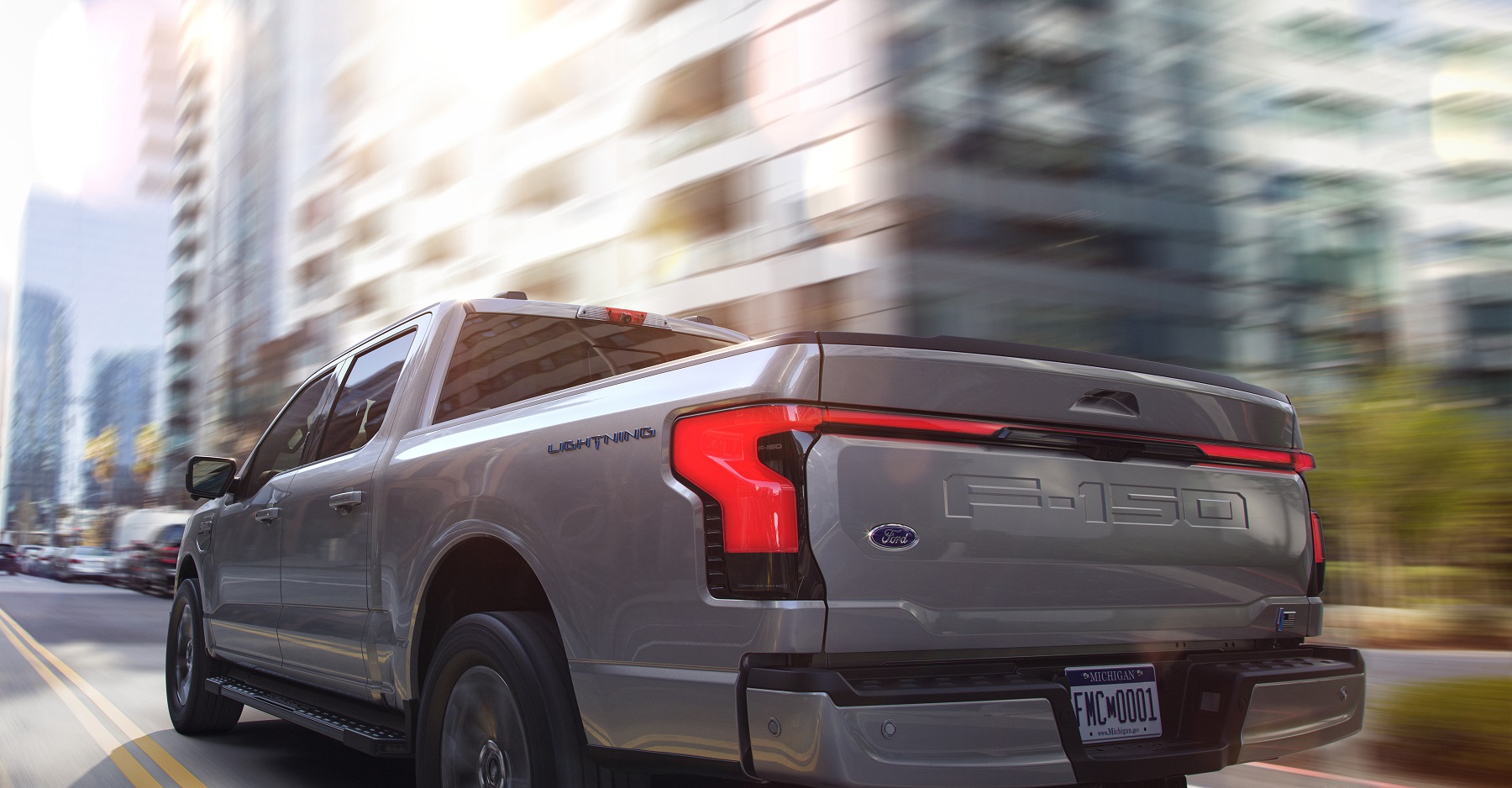 If there’s one bit of info which makes the F-150 Lightning a truly compelling offering, it’s this. The MSRP sans destination charge is $39,974 and that’s before any federal or state tax credits. At that price point, it’s a couple thousand less than the not-a-Mustang Mach-E and right around the same price as a Tesla Model 3. But as with any truck that price can escalate rapidly. Ford says the mid-series XLT model will start at $52,974 excluding destination. Once you factor in Lariat and Platinum trims they’ve already announced, forget it.

The F-150 Lightning is expected to enter production in Spring 2022 at the historic Rouge Complex. A new Rouge Electric Vehicle Center is being finished up with a $700 million investment, 500 new jobs, and a focus on carbon neutrality. This new center is where the Lightning will become a reality.

If you want to be one of the first in line for it, head on over to Ford.com to place a reservation. $100 buys you a spot in line.