The Hooniverse staff (squad?…crew?) are privileged to get access to some pretty impressive machines, but occasionally one of them just feels legitimately special. Even in standard trim, the Lexus LC 500 convertible is one of those cars. Jeff got a chance to test it out it last month, and I just had a go in the very limited edition Inspiration Series version. Painted a gorgeous shade called “Structural Blue” with “Bespoke Amalfi White” interior trim, it’s quite a thing, but at $119,800 it certainly isn’t cheap. Let’s find out if it’s special enough to use this much italics. 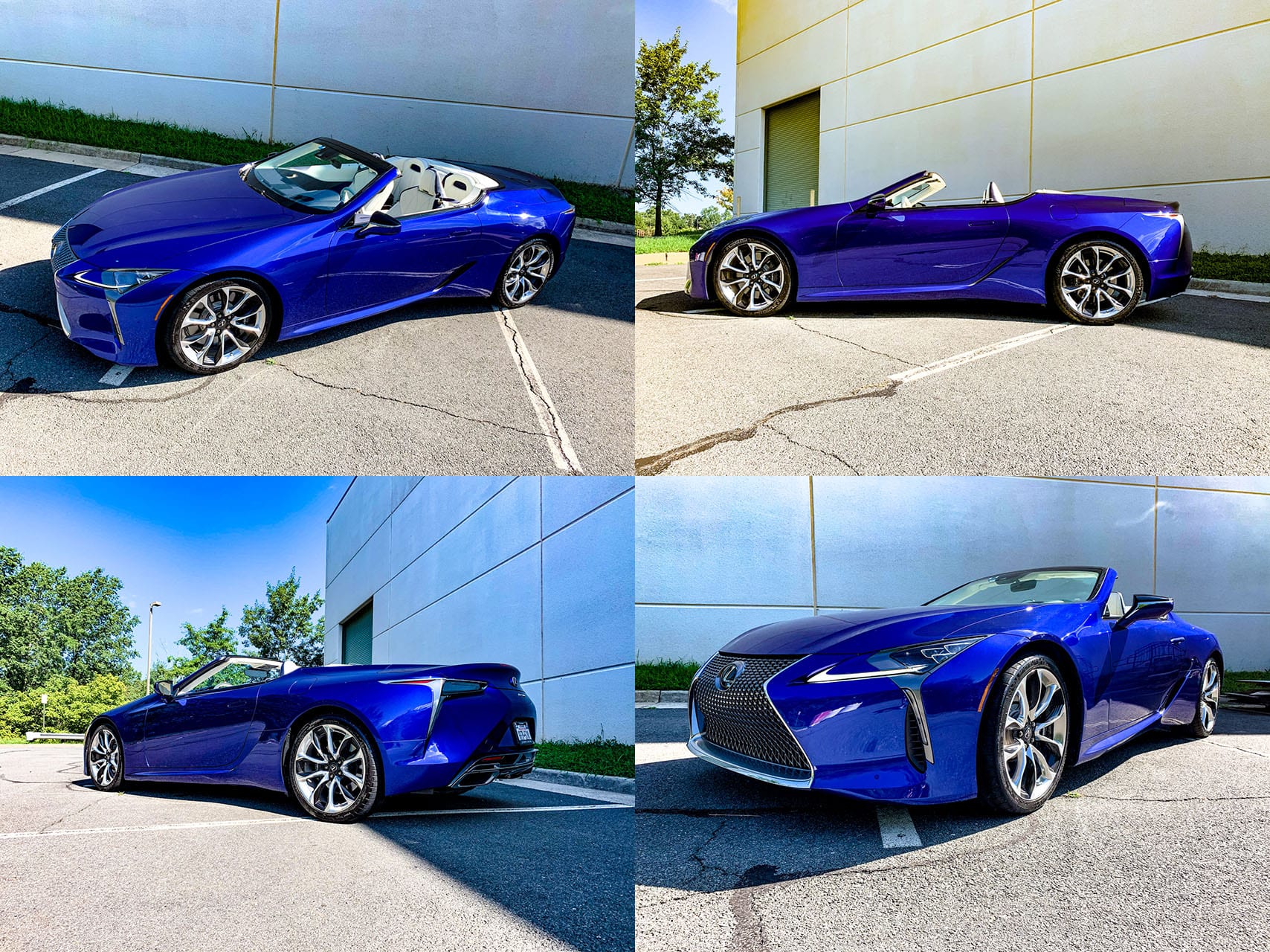 Lexus has done this drill before for the LS, LX, and LC. The latest LC Inspiration Series version of the coupe came in a gorgeous shade of green called “Nori Pearl”. Just. Look. At. That! 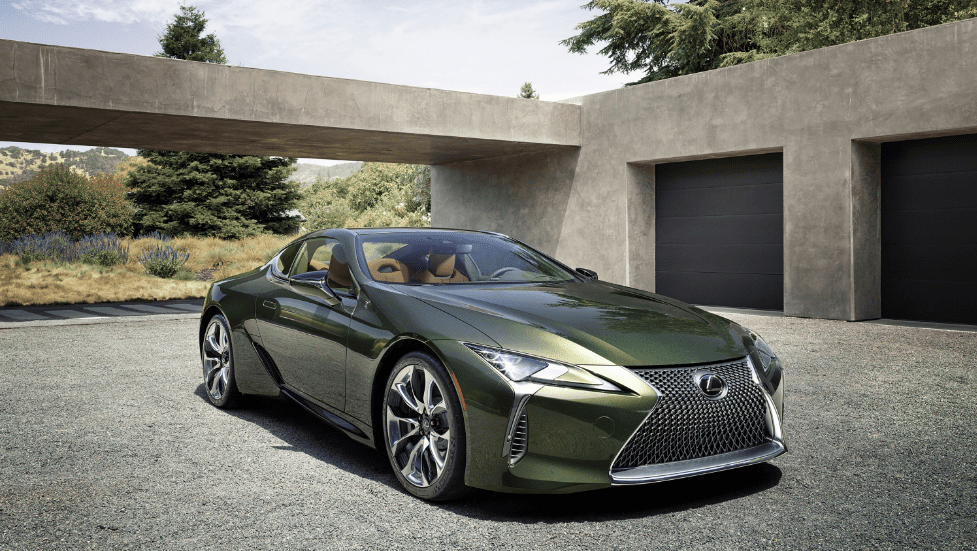 What is the “Inspiration Series”, well Lexus describes it as a “periodic release of limited-edition Lexus models with unique styling and ultra-premium features”. Only 100 are made each year for the U.S., while other countries get different versions. So far, pretty special. 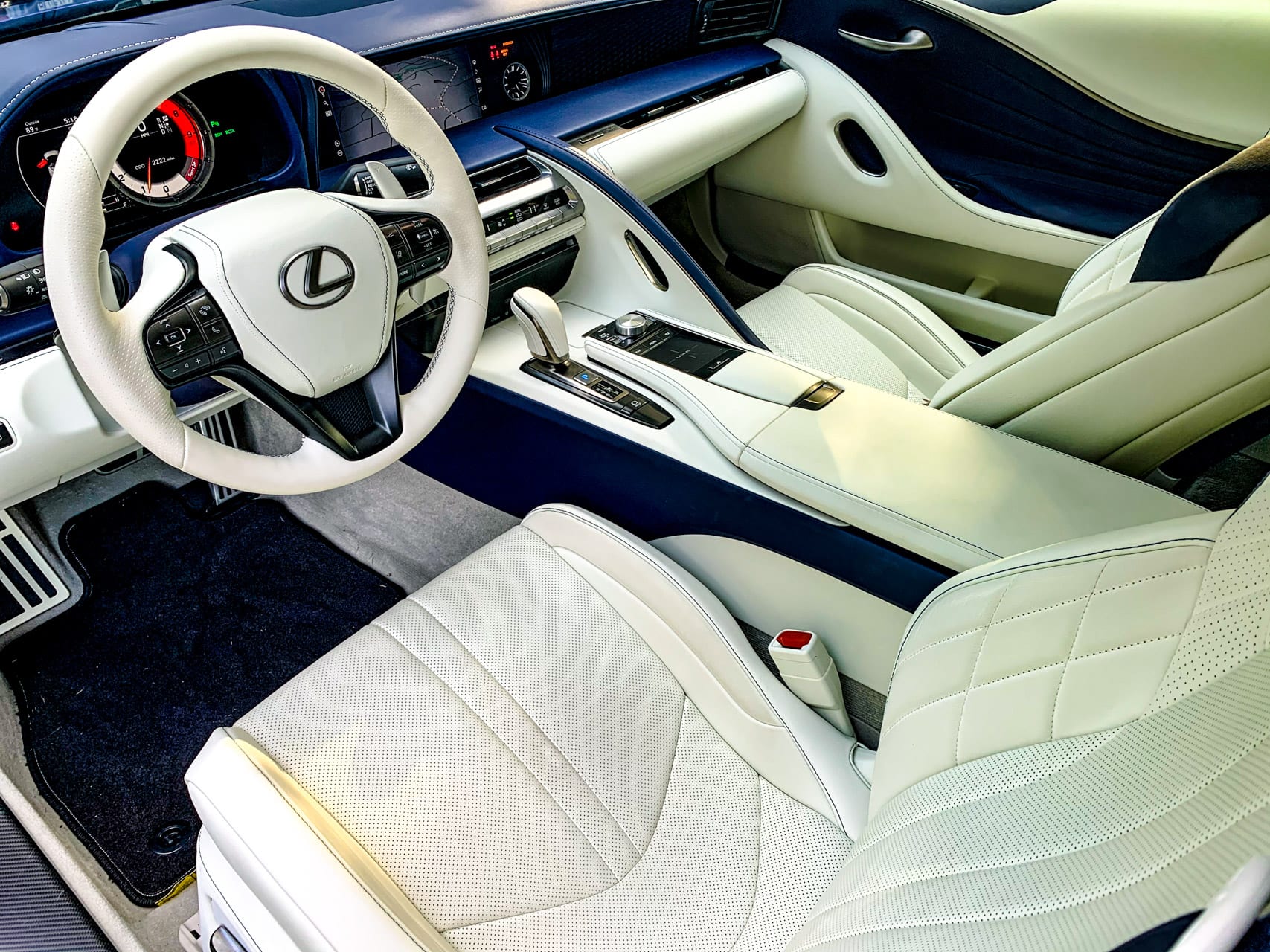 So, aside from the special paint and interior colors, what else do you get for the $18,800 premium over the regular LC 500 Convertible?

It’s easy to pick apart an options list and try to see if the extra bits are worth the premium you’ll pay. The Inspiration Series isn’t that type of car though, it’s all about exclusivity. With such a limited run, you’re not likely to see many out on the road. The other LC driver in the photo series below was pretty impressed. 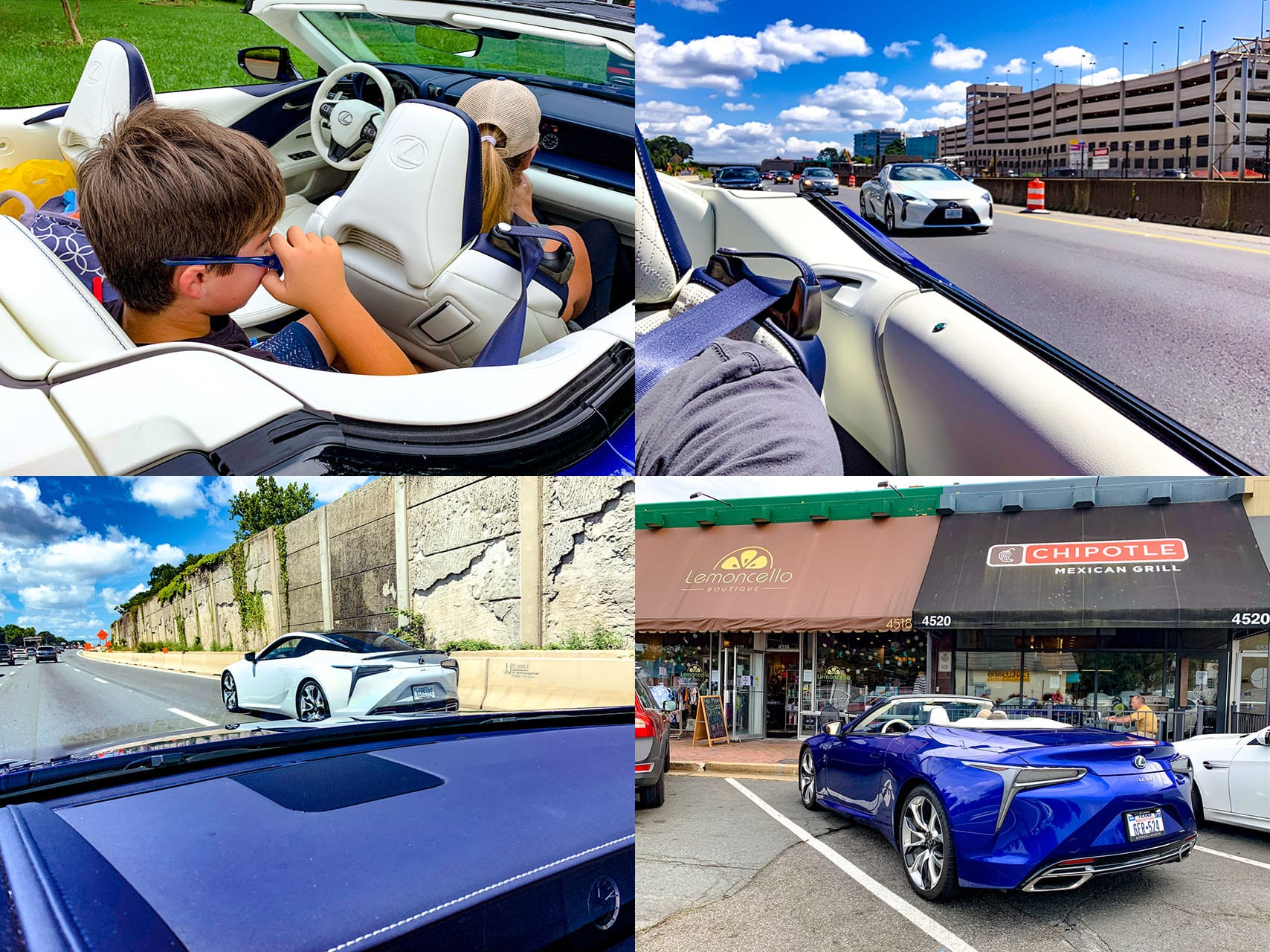 Other than that, it’s mechanically identical to the new LC convertible and has the same 471 horsepower 5.0L V8 engine with a claimed -60 time of 4.4 seconds. Let’s walk through what it’s like to live Lexus’ latest convertible for a few days.

When you end up north of $100,000, you expect to be wowed a bit by some fancy tech. Especially when the latest base model Kia has more of it than you would expect. Lexus focused on the new stuff in the LC convertible to help you be more comfortable. Their “Climate Concierge” system integrates the climate control system with the heated and ventilated seats, as well as the heated steering wheel. Instead of having to set each one individually like a schmuck, you set the temp you’d like to hit and it uses a mix of vents to get you there.

I didn’t get to check out the heating function, since it was the middle of summer. The promo materials state that the system will use vents behind the wheel to warm your hands. That feature, when paired with the climate control, heated wheel, and the vents in the top of the seats, should keep you pretty toasty in a chilly top-down night out. I had to fiddle with the settings a bit to get the ventilated seats to sync with the climate control settings, but once I did, I didn’t need to mess with it again. The additional seat vents right around your neck are fantastic. 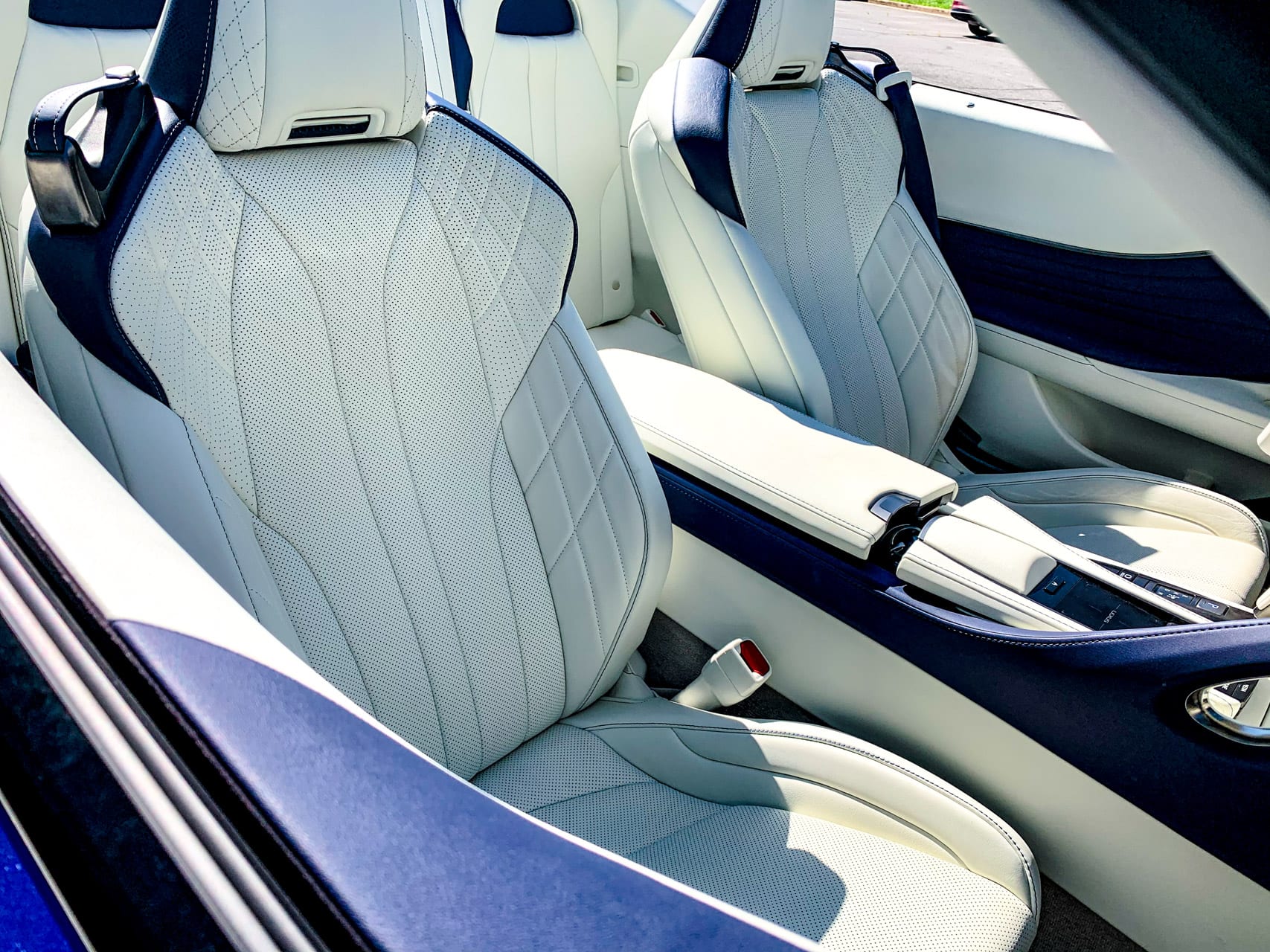 Elsewhere, the LC gets Amazon Alexa integration, the latest Lexus Enform infotainment system, and even a Lexus app to remote start the car and schedule service. From a usability perspective, I’m not a fan of the Lexus touchpad on any car, but everything else worked quite well. Although it’s incredibly hard to find the controls for the top. Look above, see that wrist rest just before the center console?

The damn thing opens! I had to text the delivery dude and ask him how to put the top down. Embarrassing. 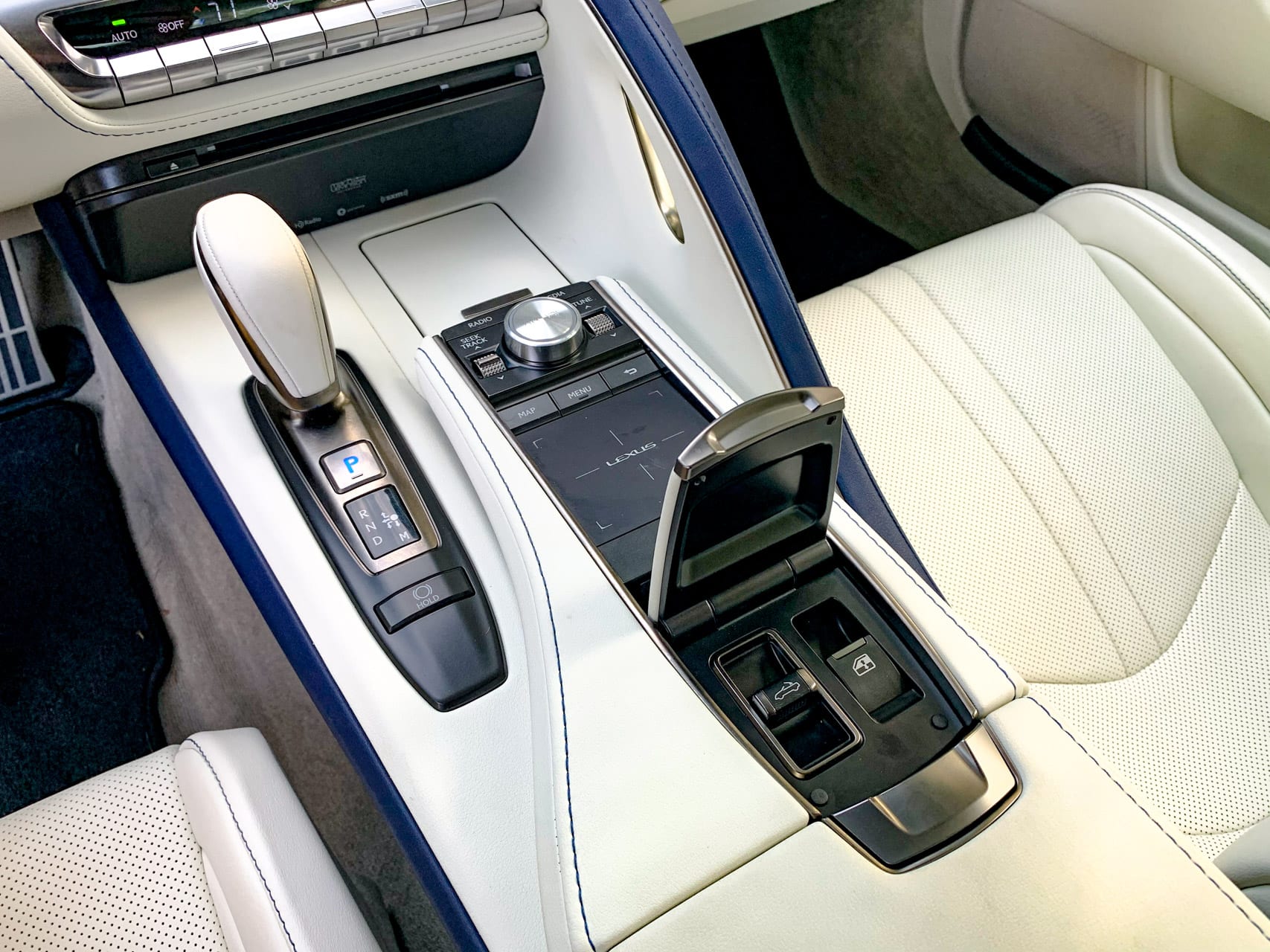 Once you get the flap open, the top operation takes about 15 seconds to lower at 31 mph or slower, and 16 seconds to raise. That was fun to do in stop and go traffic.

When I last drove the LC coupe, it was a pre-production model but it was pretty close to 100% complete. I pulled together a video on my thoughts, including an LC 500 technical walkthrough where we put the LC up on a lift to take a look at what makes it tick.

The resulting debate at the end of that video had me stating that I would even have one over a Porsche 911 if it were my own money. I know that’s potential heresy, but I felt that the LC coupe was just more “special”. Naturally, now that I’ve been driving a special edition of the latest convertible version, that feeling was amplified that, but what struck me was how much fun the LC convertible is to drive. No, it likely won’t beat a 911 around the track, but that is a minimal percentage of the average car’s actual use.

What the LC is great at is providing just enough speed.

And that noises it makes! Click the knob into Sport+ and the LC’s active exhaust unleashes a fury of sound. Like the NSX I drove recently, the LC is great at going from quiet cruiser to raucous bad boy, depending on the setting. Lexus claims that the LC “channels sound through the cabin from front to rear as you accelerate”. That is done with a combination of physical induction piping and, unsurprisingly, the use of speakers. Many of you just rolled your eyes I’m sure, but I don’t mind it. It’s sort of like fake breasts, you can claim you’re not into it, but at the moment you can’t deny that you very much are into it. Plus, the LC convertible removes some of the physical barriers to hearing the exhaust when the top is down. It’s clear that what you are listening to is a nicely tuned, naturally aspirated V8 matched with a well-crafted exhaust. I love it. 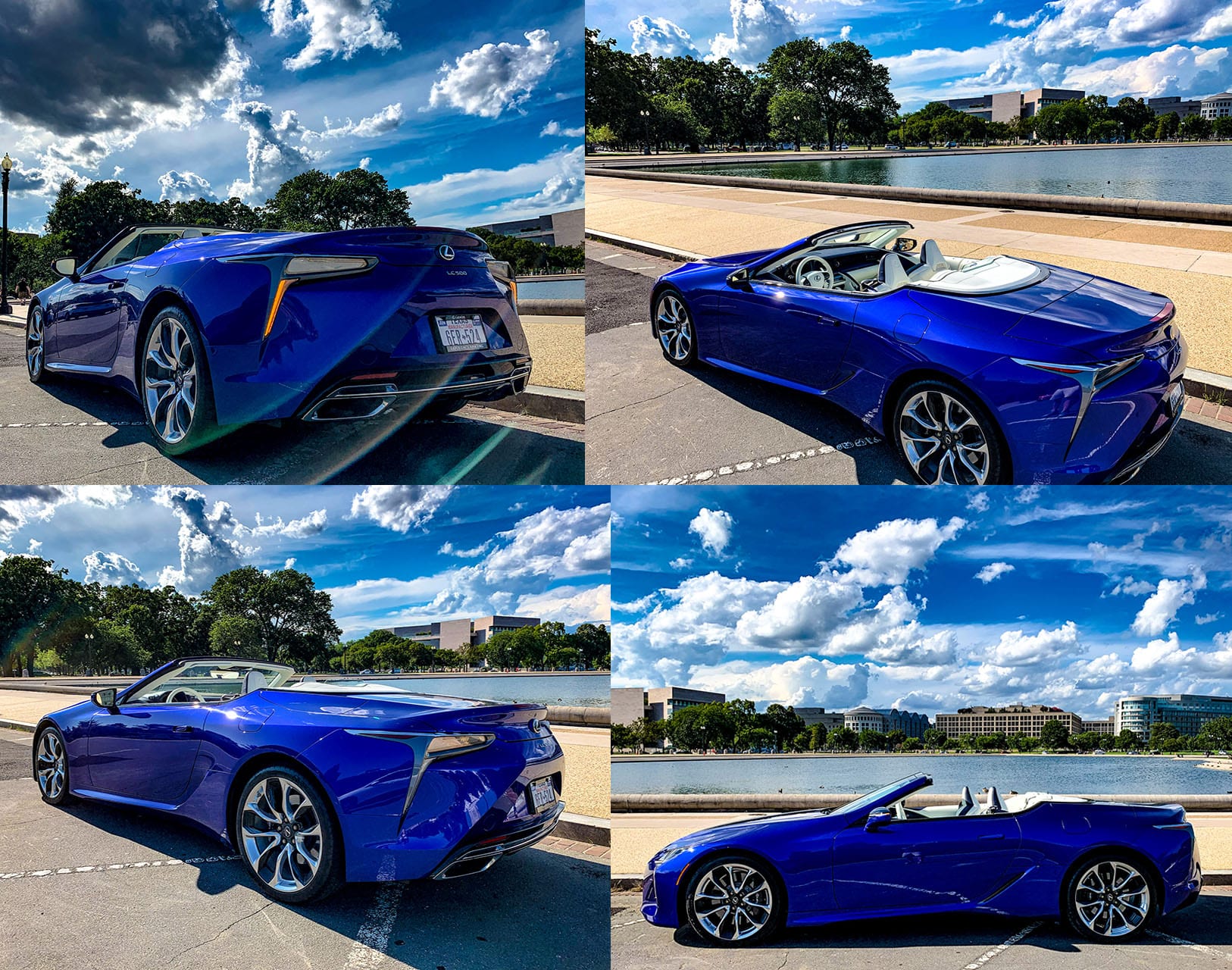 Some may disagree, but 4.4 seconds to sixty isn’t slow. Sure, it’s slower than a 911 but it’s still a blast to drive. While it won’t be setting any ‘Ring records, the LC feels incredibly planted around the bends, a credit to the add-on Yamaha dampers. Although the standard LC I drove previously was still pretty fantastic to drive when the roads got twisty. 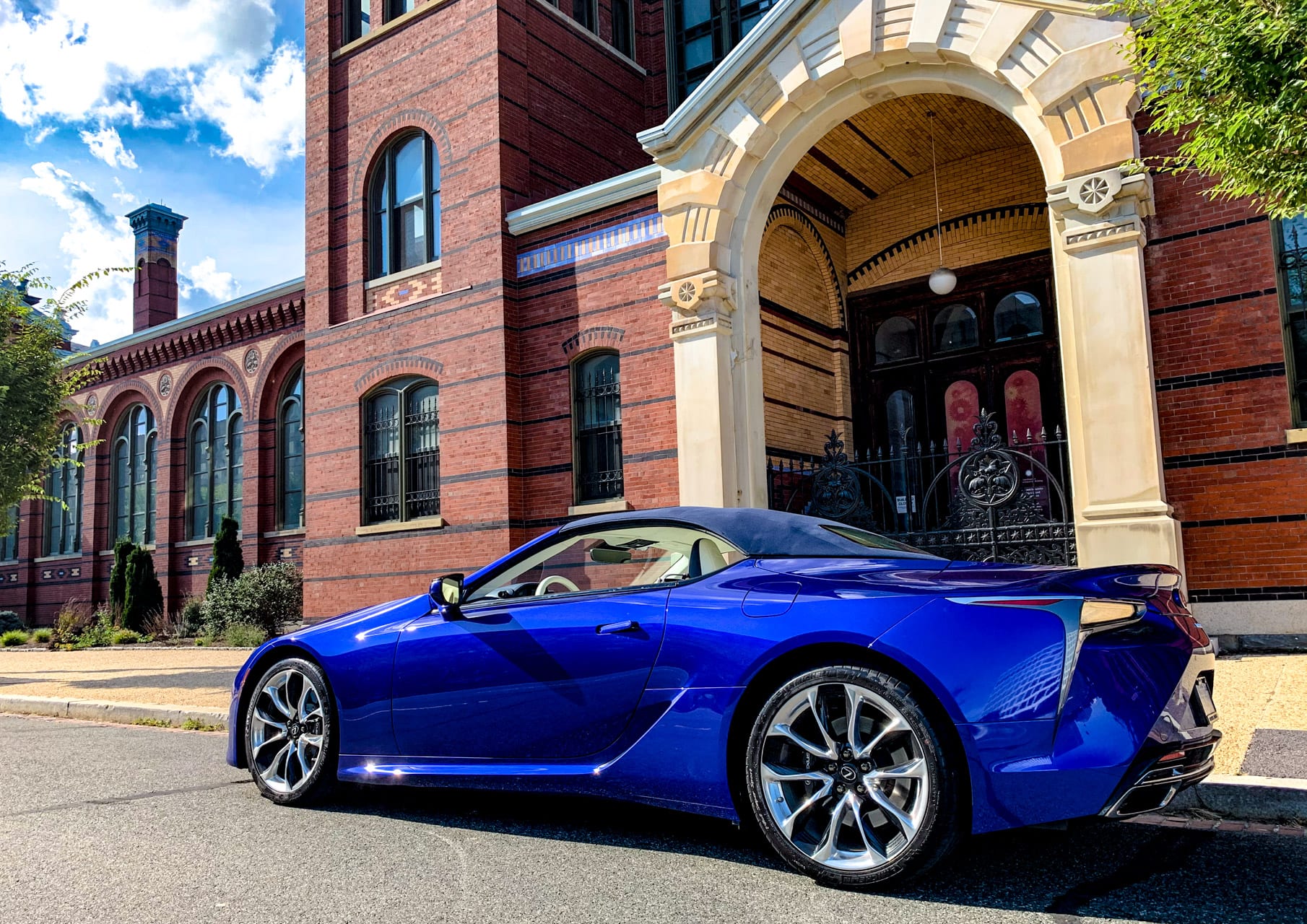 What this car excels at is the ability to impress non-car people. Driving the NSX, I still got flipped off for speeding past someone going under the speed limit. Its brash yellow paint seemed to annoy people who weren’t into cars while having the opposite reaction in-car geeks. It’s a great way to meet dudes. The LC got reactions from a wide swath of people, with photos and thumbs up occurring pretty regularly across my four days with the car. Maybe it was the crazy blue paint or the fact that the LC looks a bit like a spaceship, but it was interesting to watch people watch the LC. 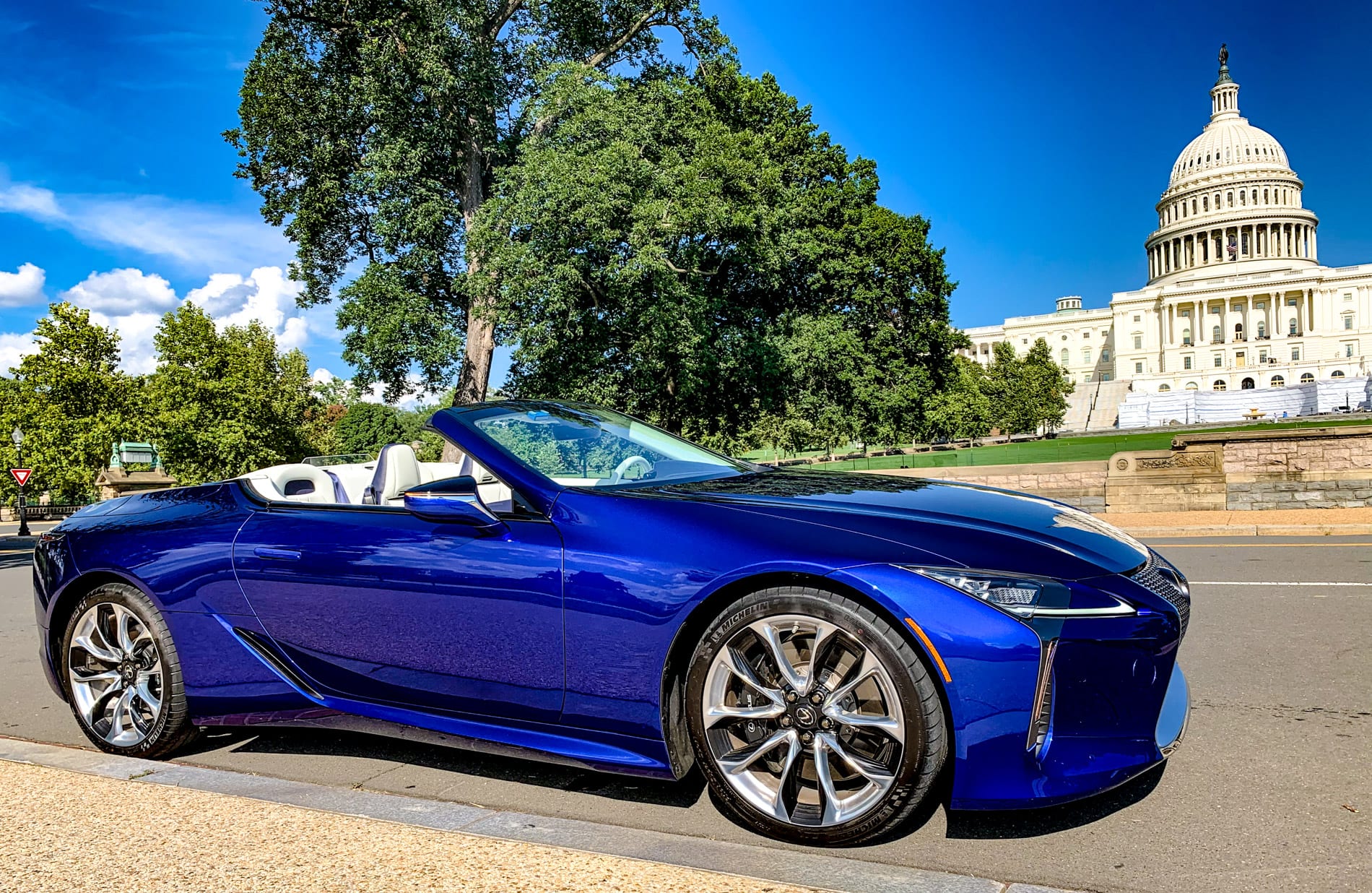 What struck me the most as I swapped the LC’s keys for a new Highlander was how easy it made the transition between comfortable GT cruiser and brash muscle car. With the fine stitching on material literally called “bespoke”, it was massively comfortable and felt like a six-figure car. But when you flip the switch to Sport+ it awakens the V8 underneath and would scare people driving through tunnels. That part I very much enjoyed. That split personality is something that the 911 has mastered as well, but I still feel like the LC does it in a much more special fashion. Perhaps it’s the extrovert in me, but I’d still buy an LC convertible over the Porsche if it were my money.

Just look at it. 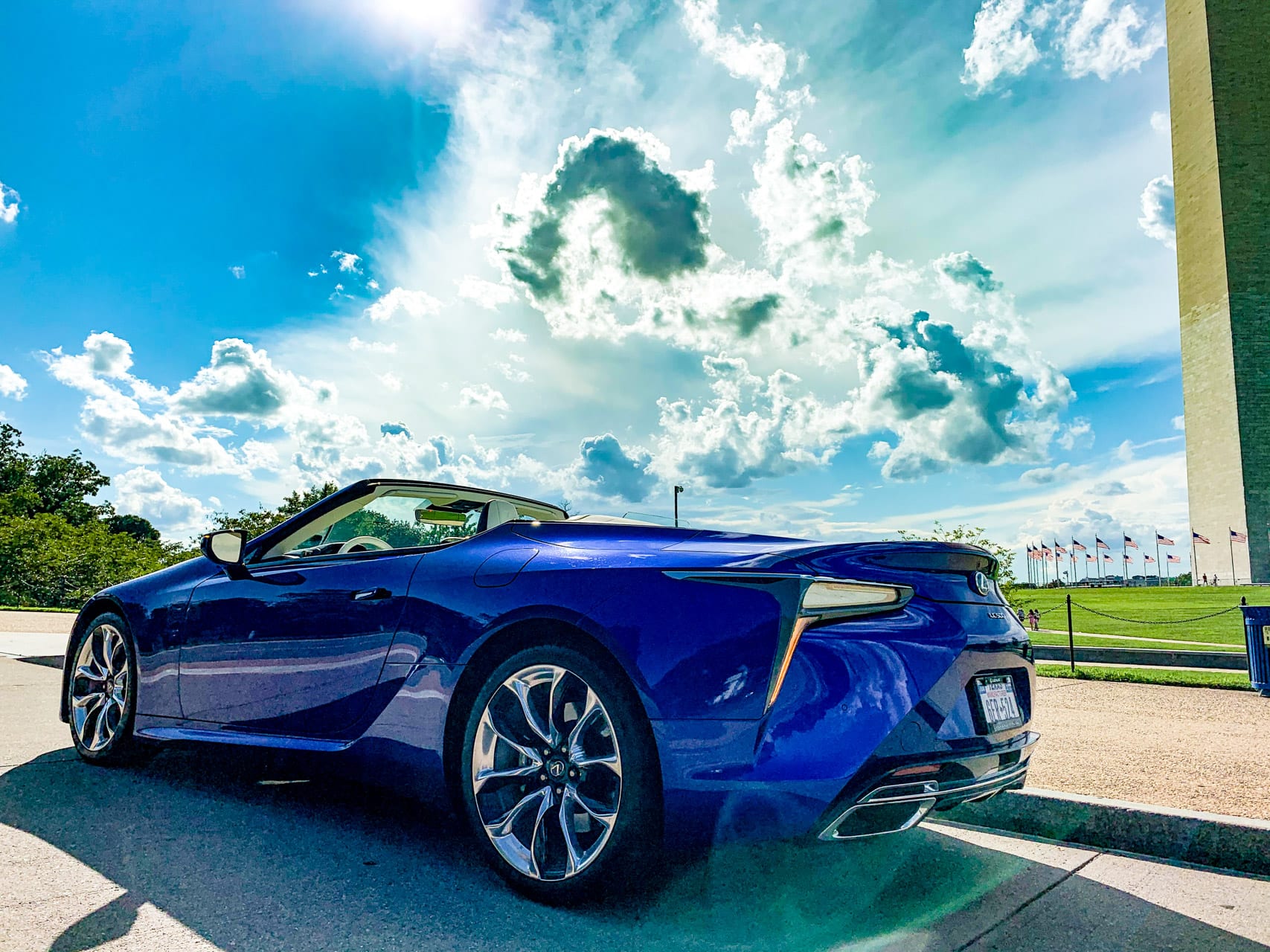 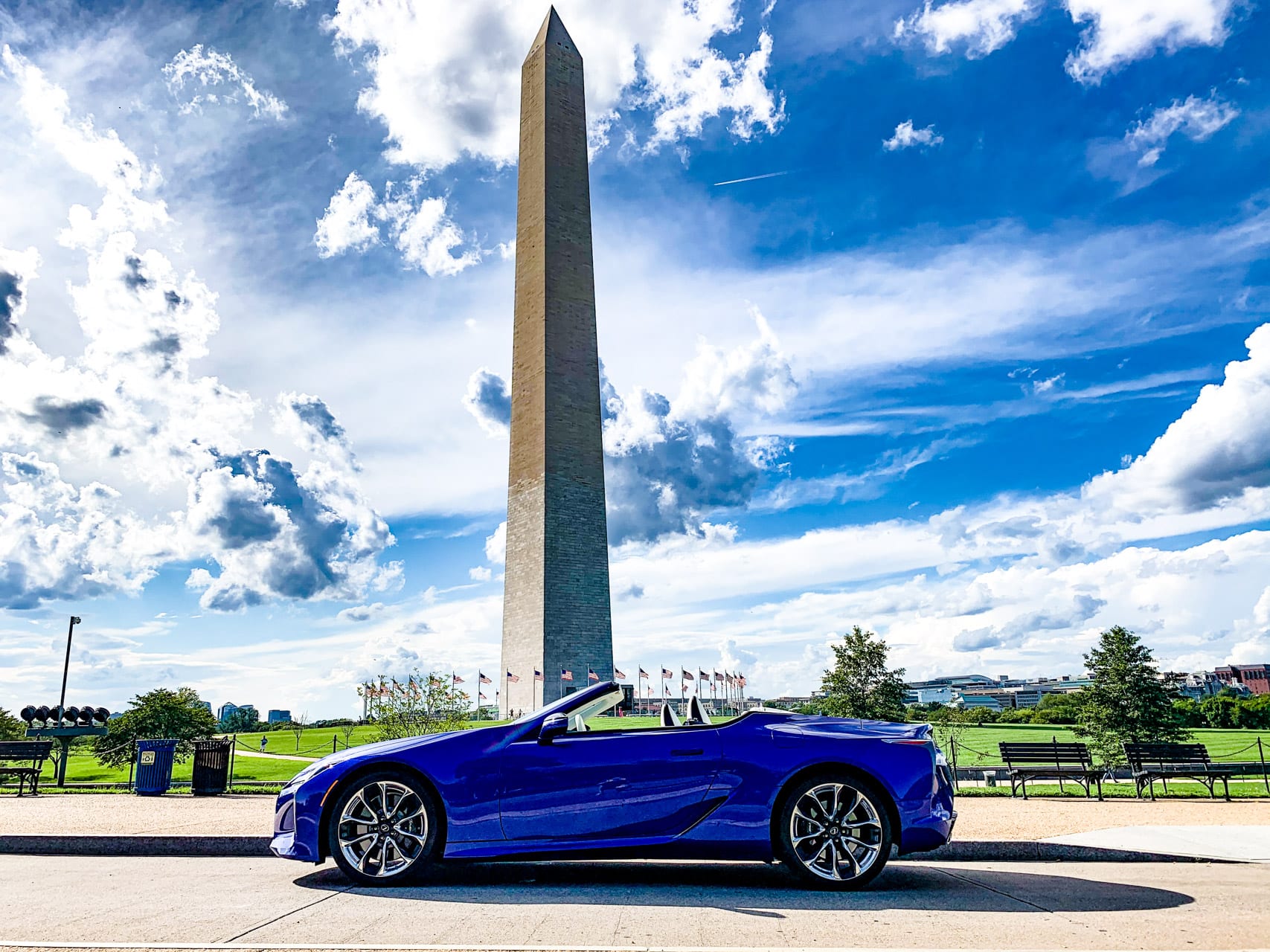 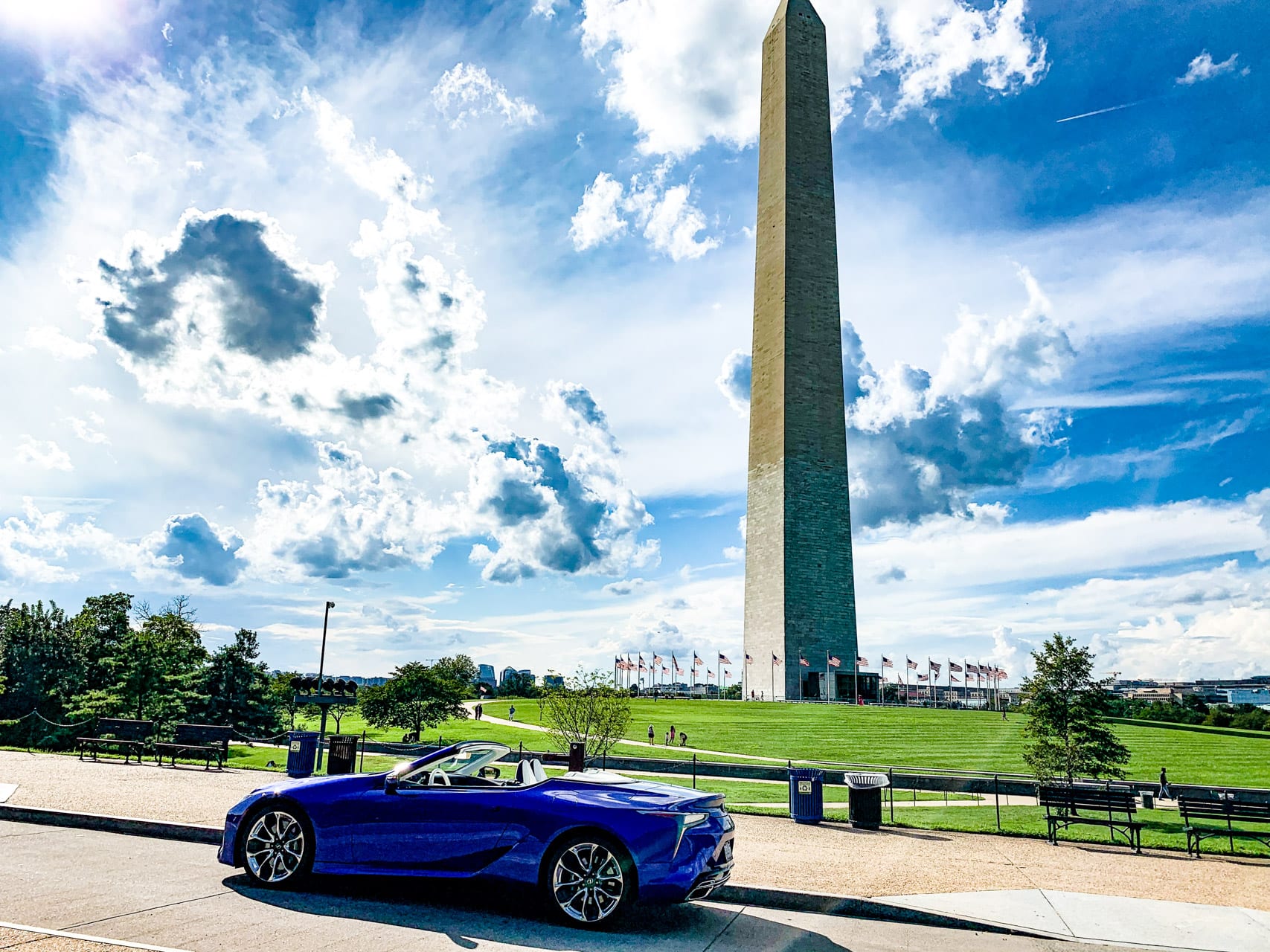 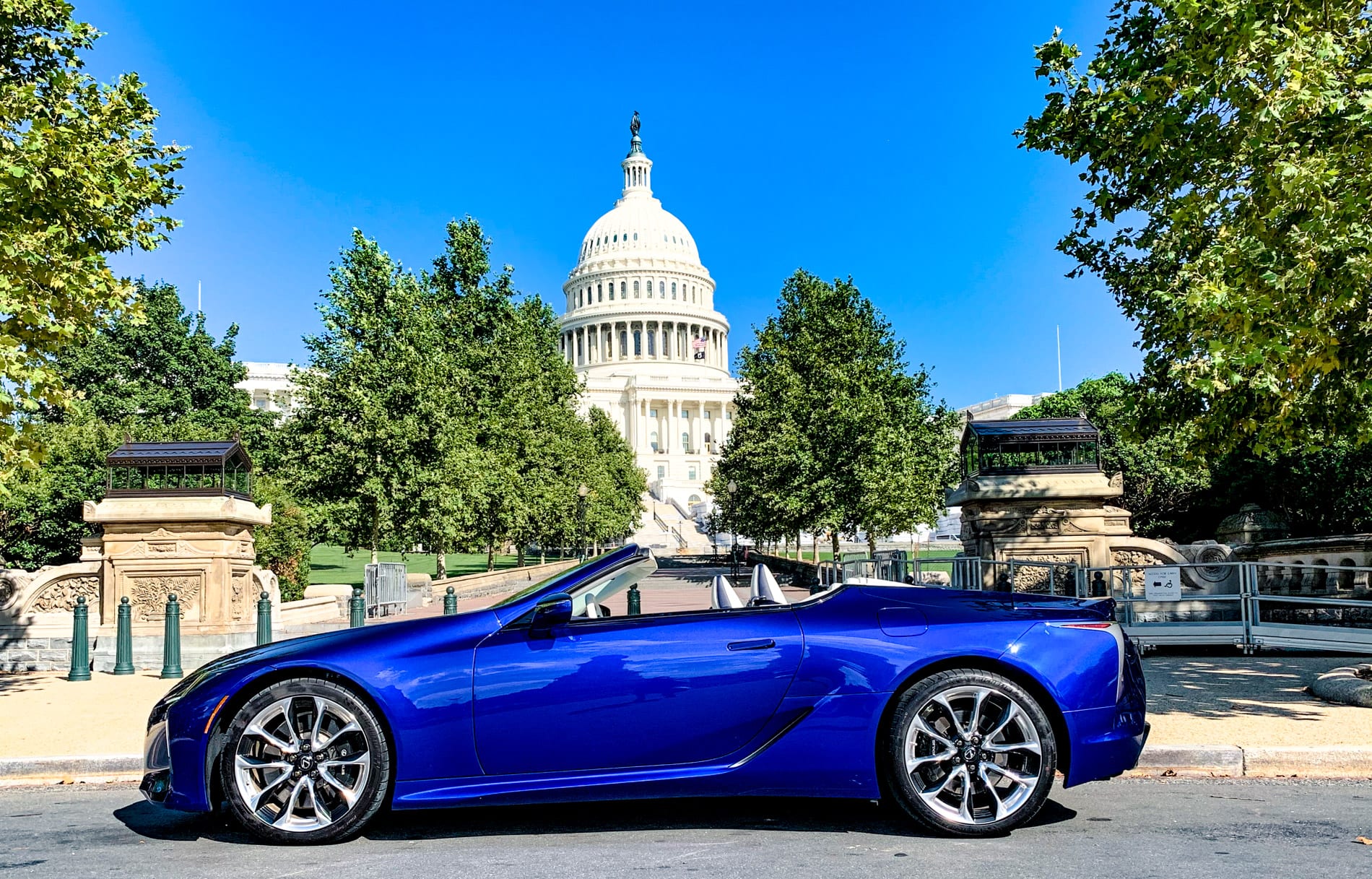 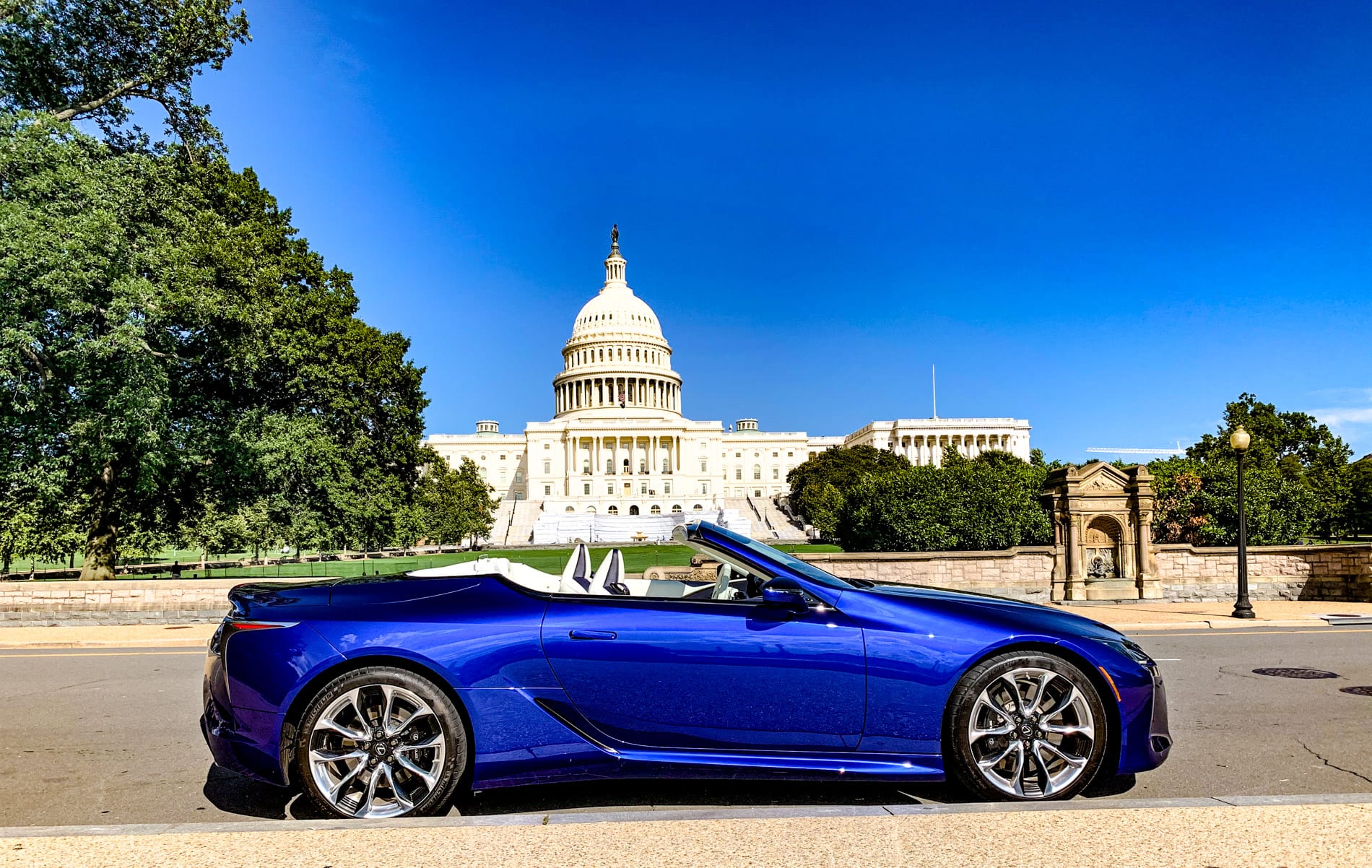 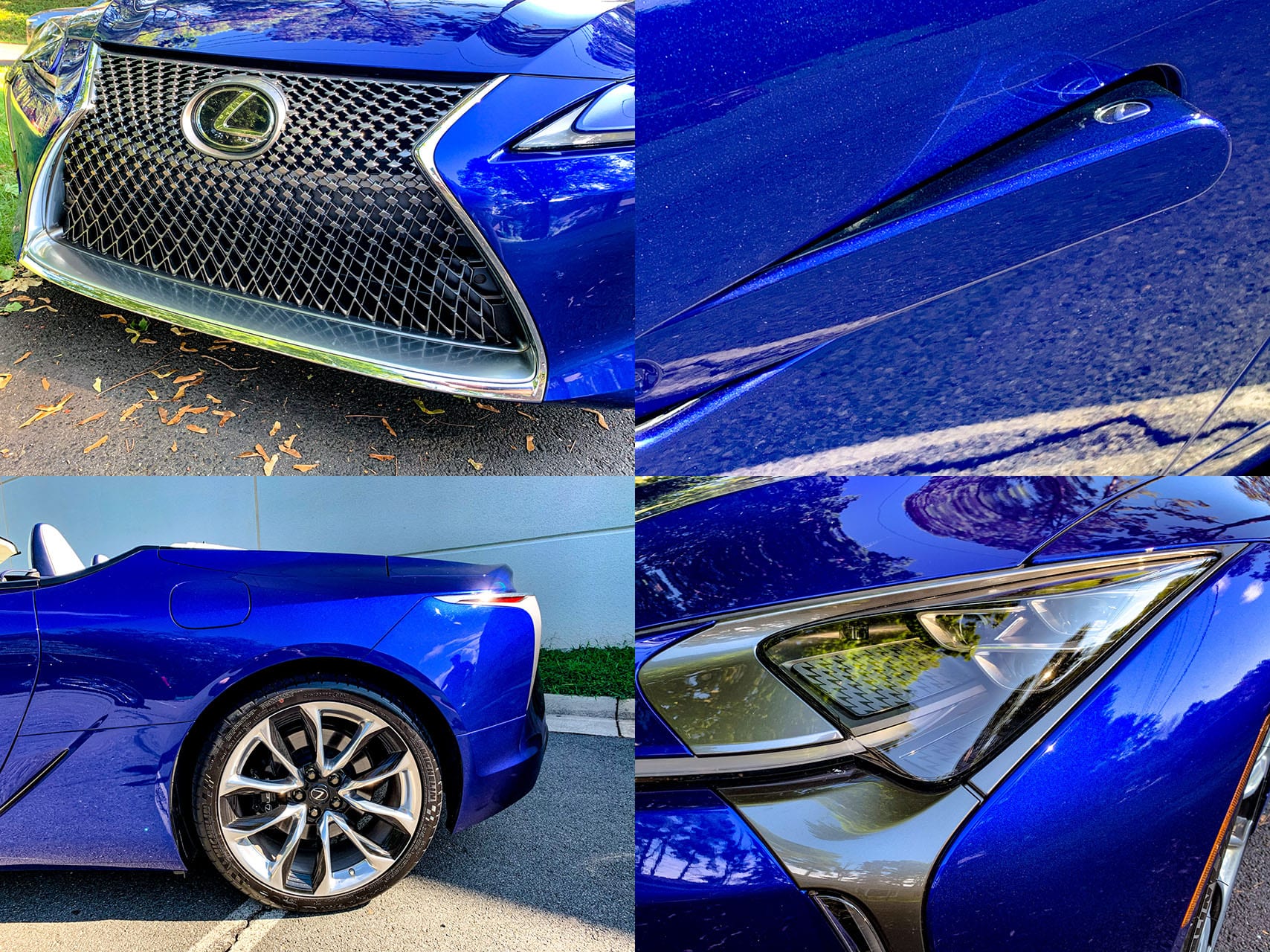 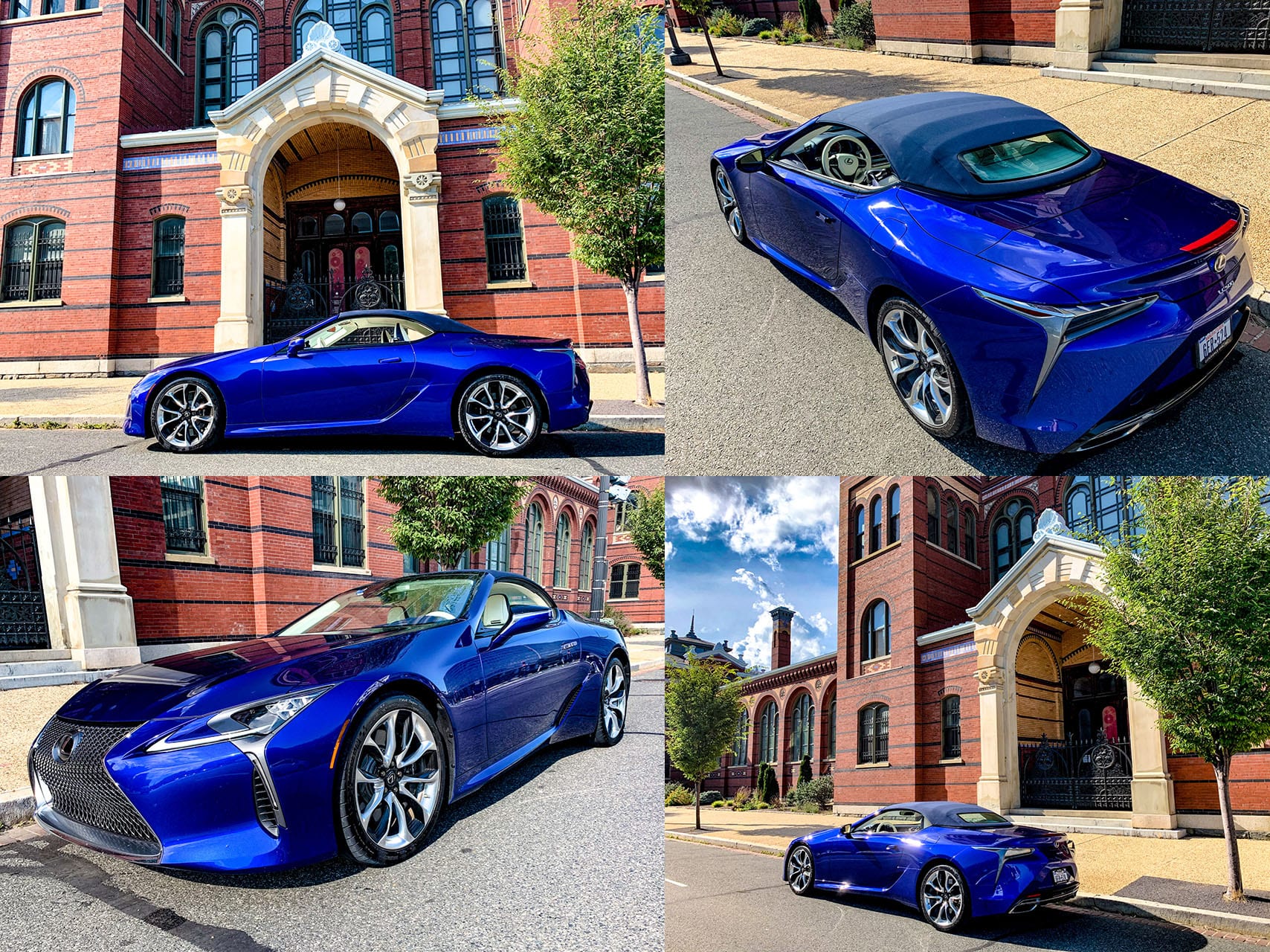 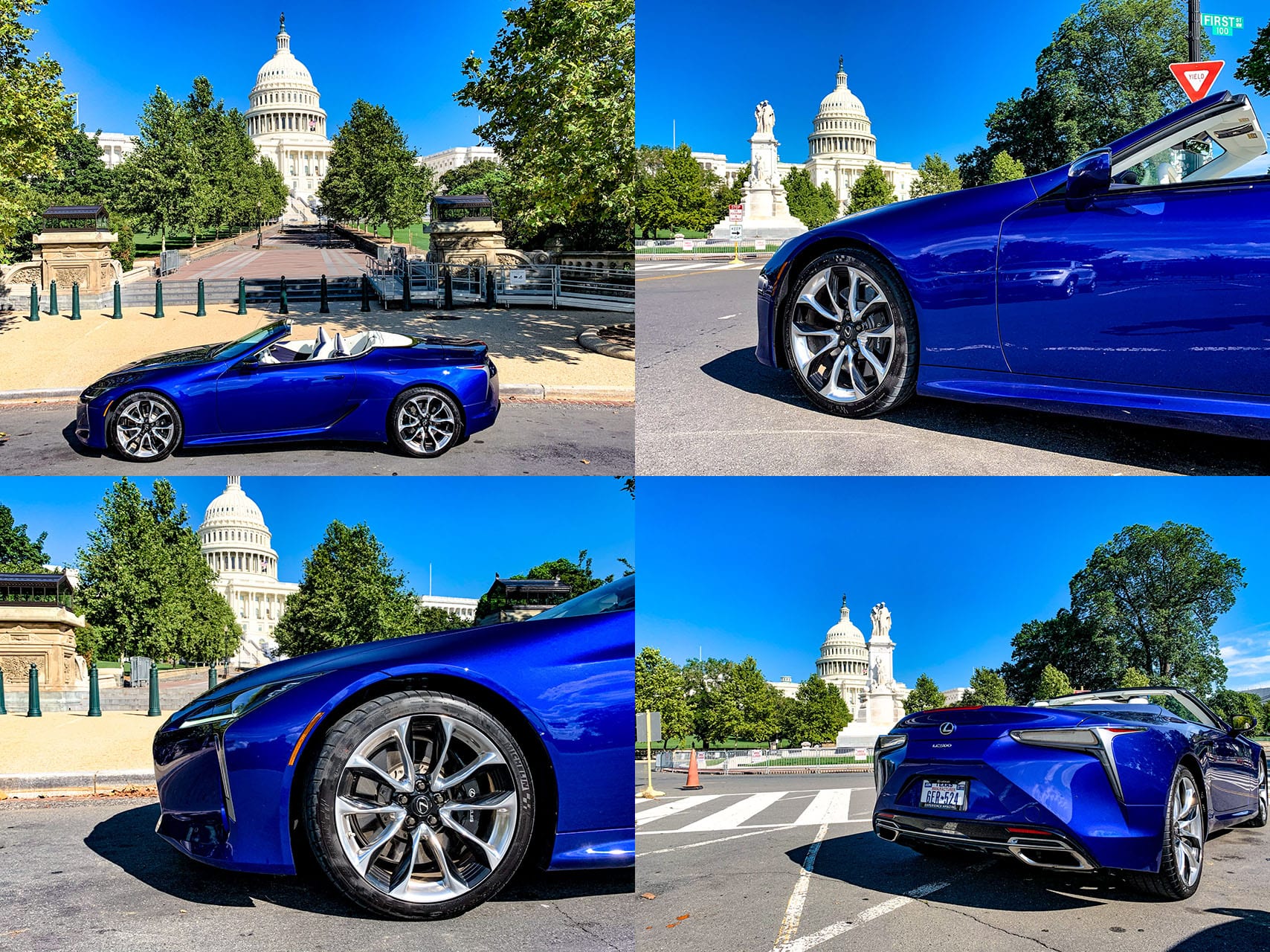 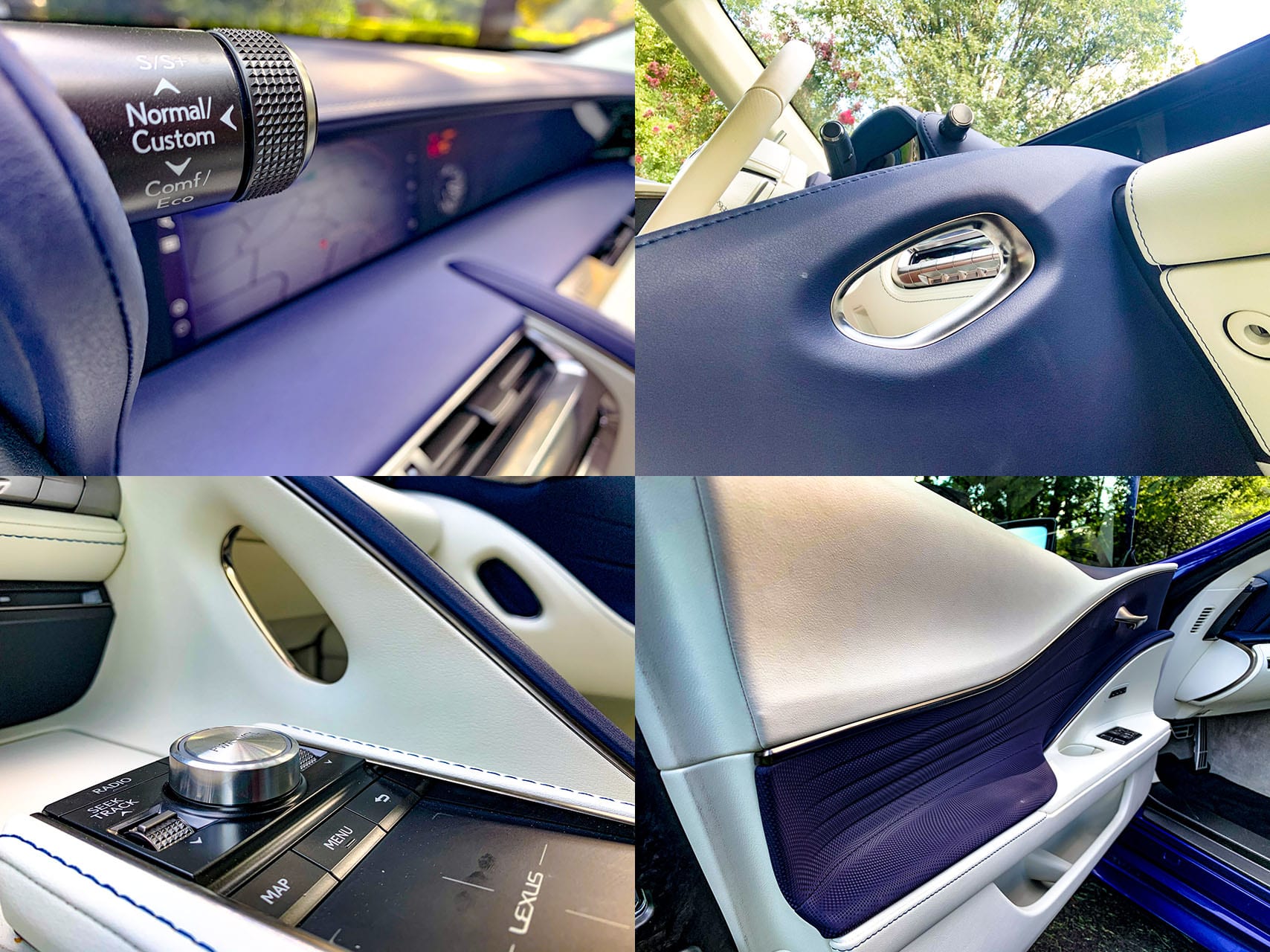 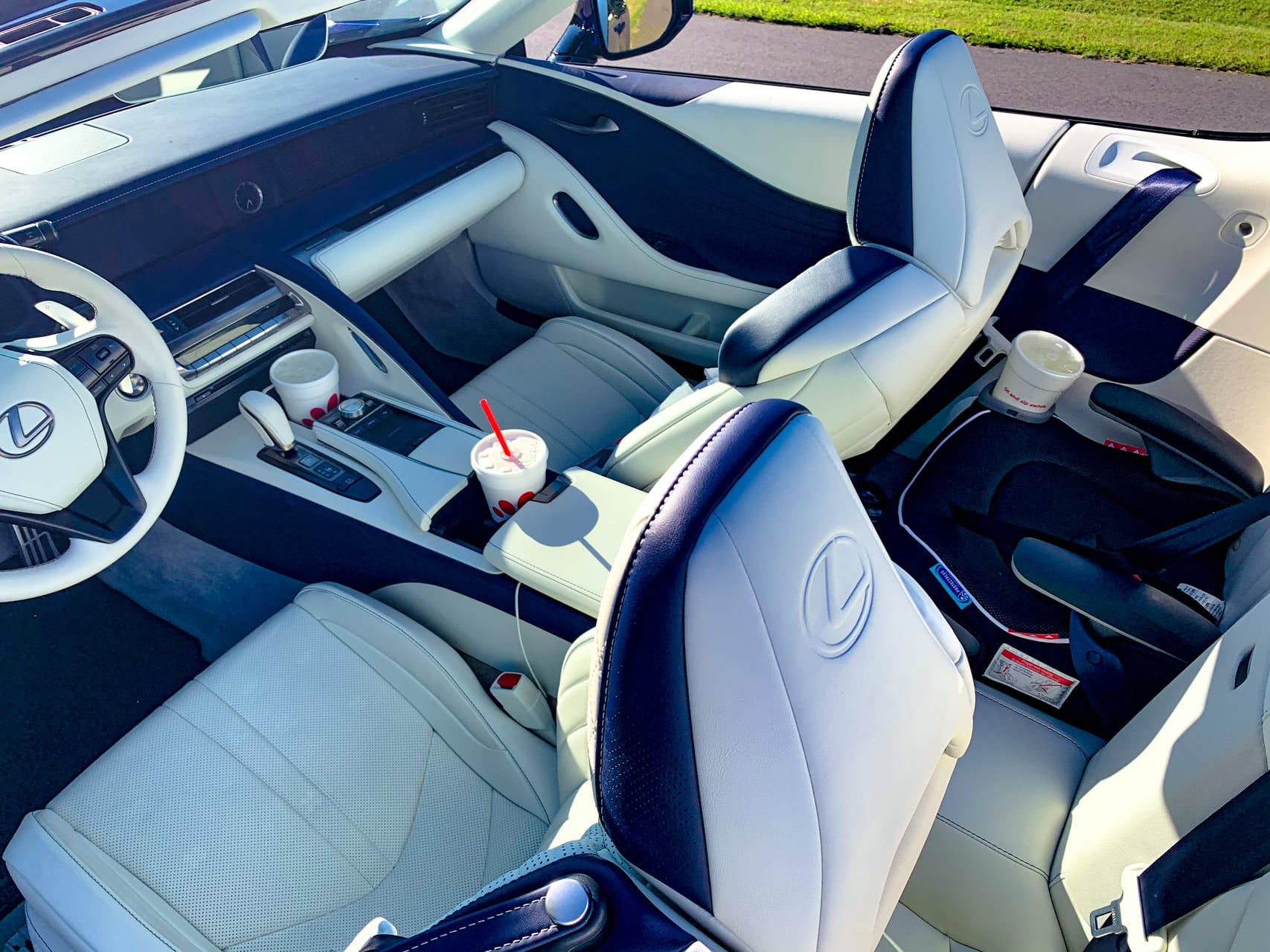 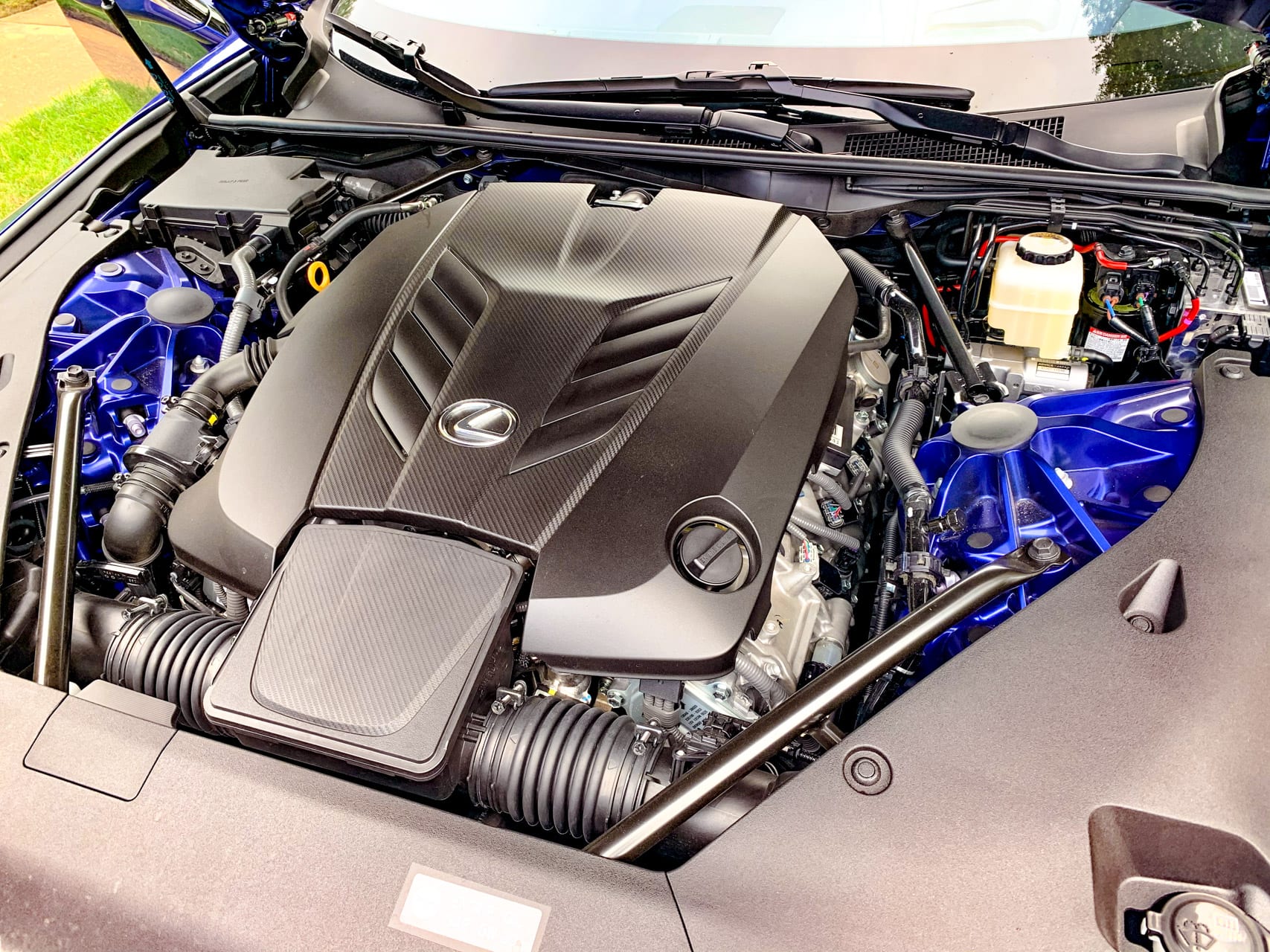 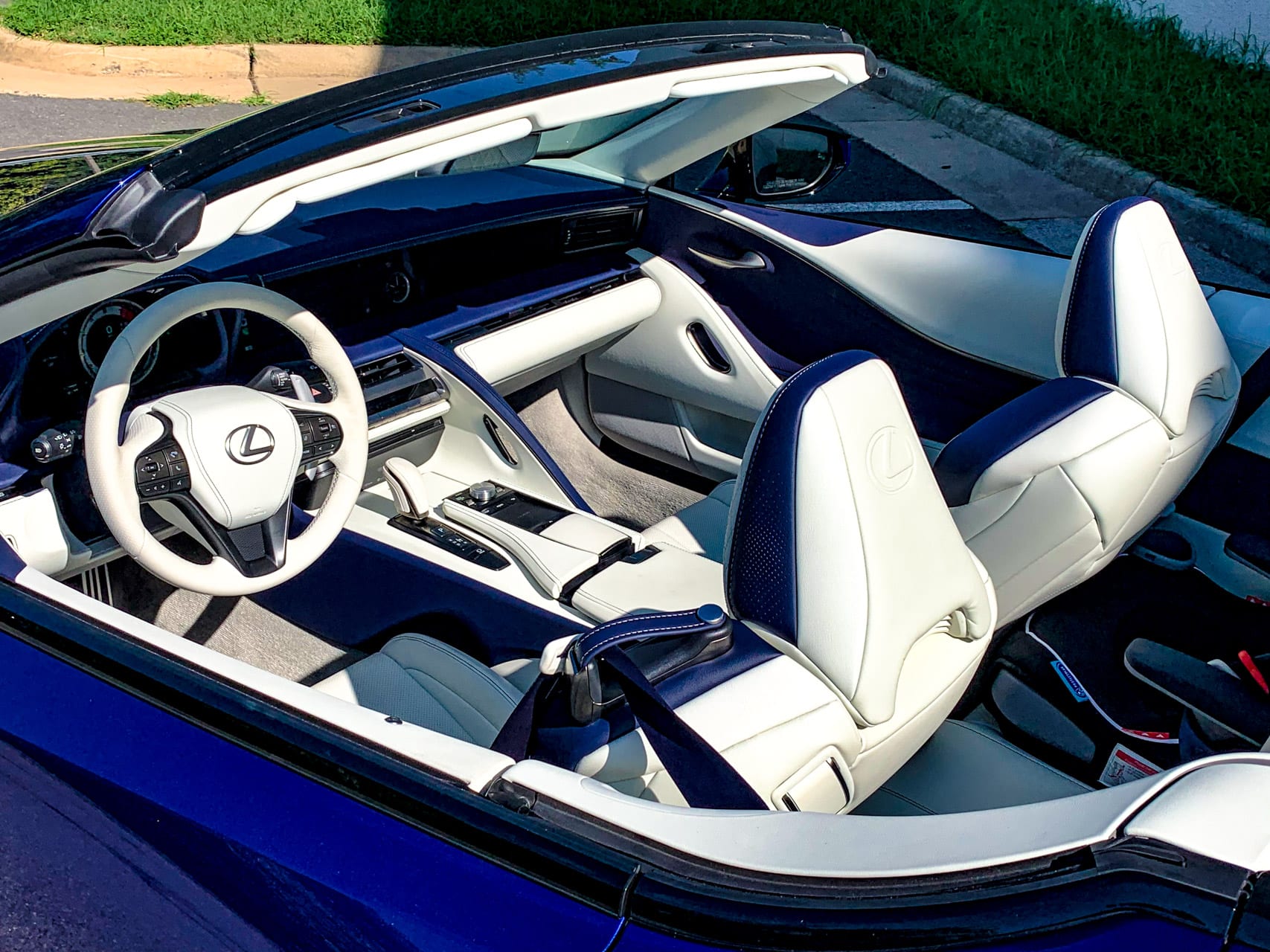 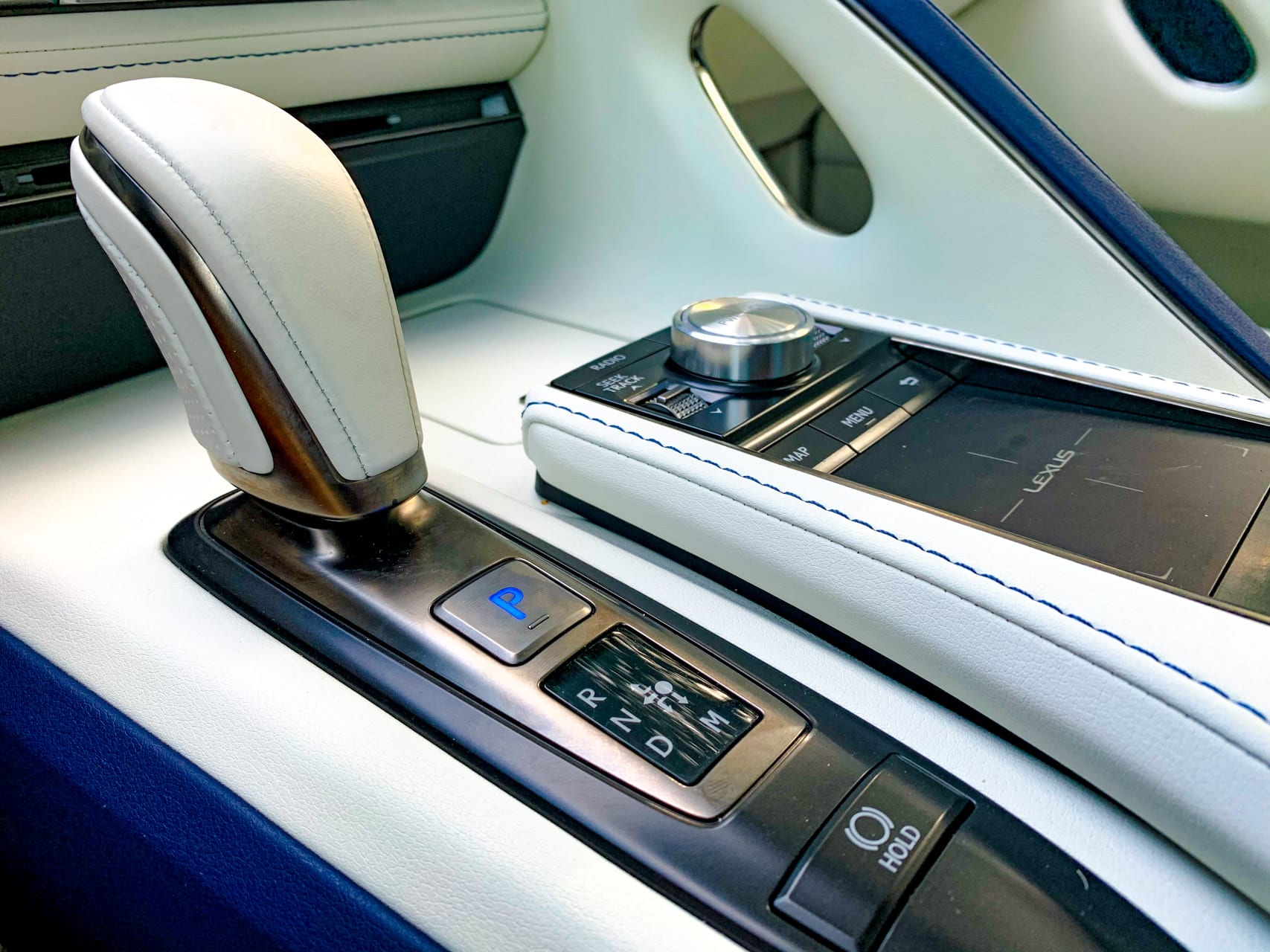 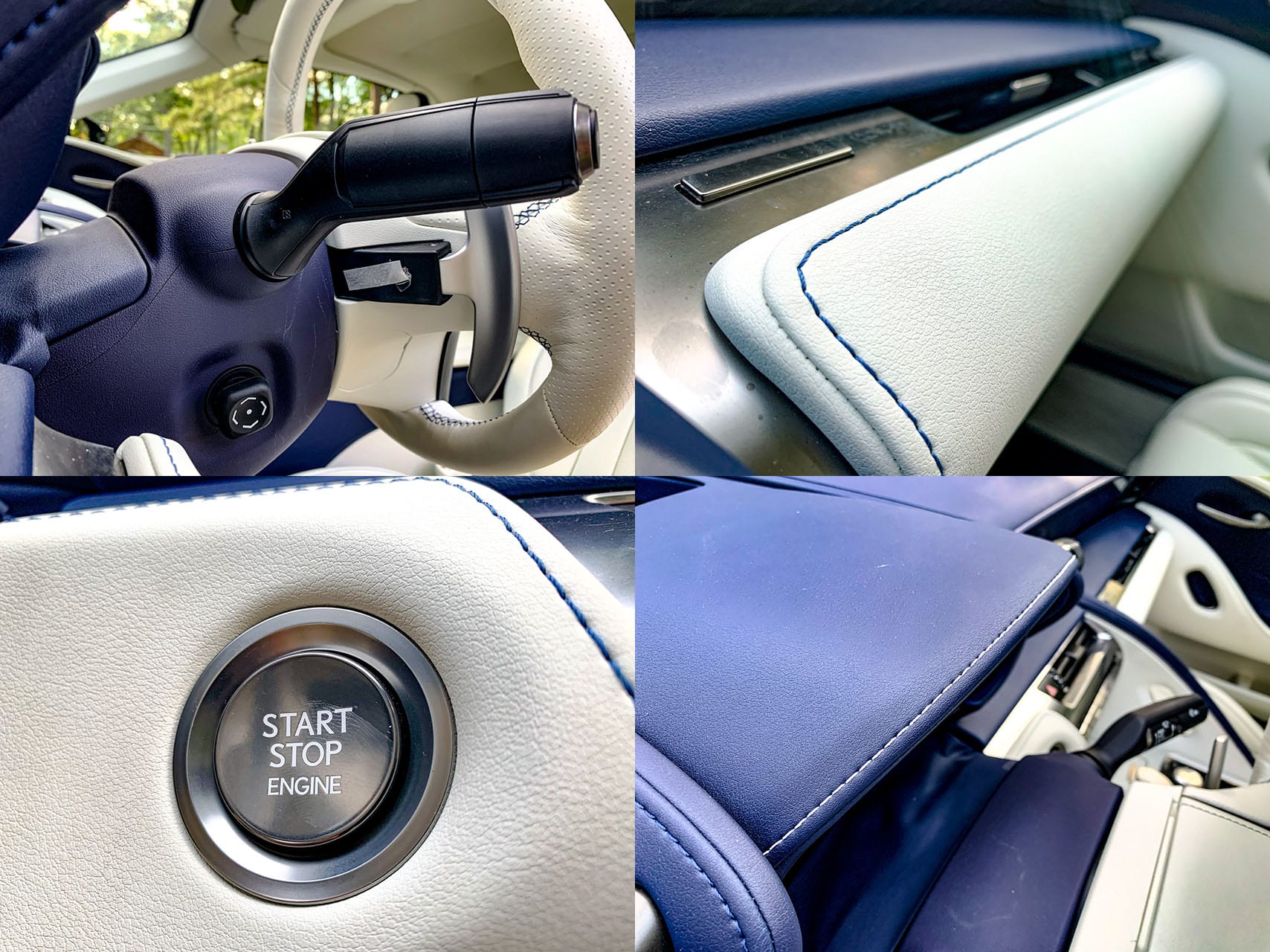 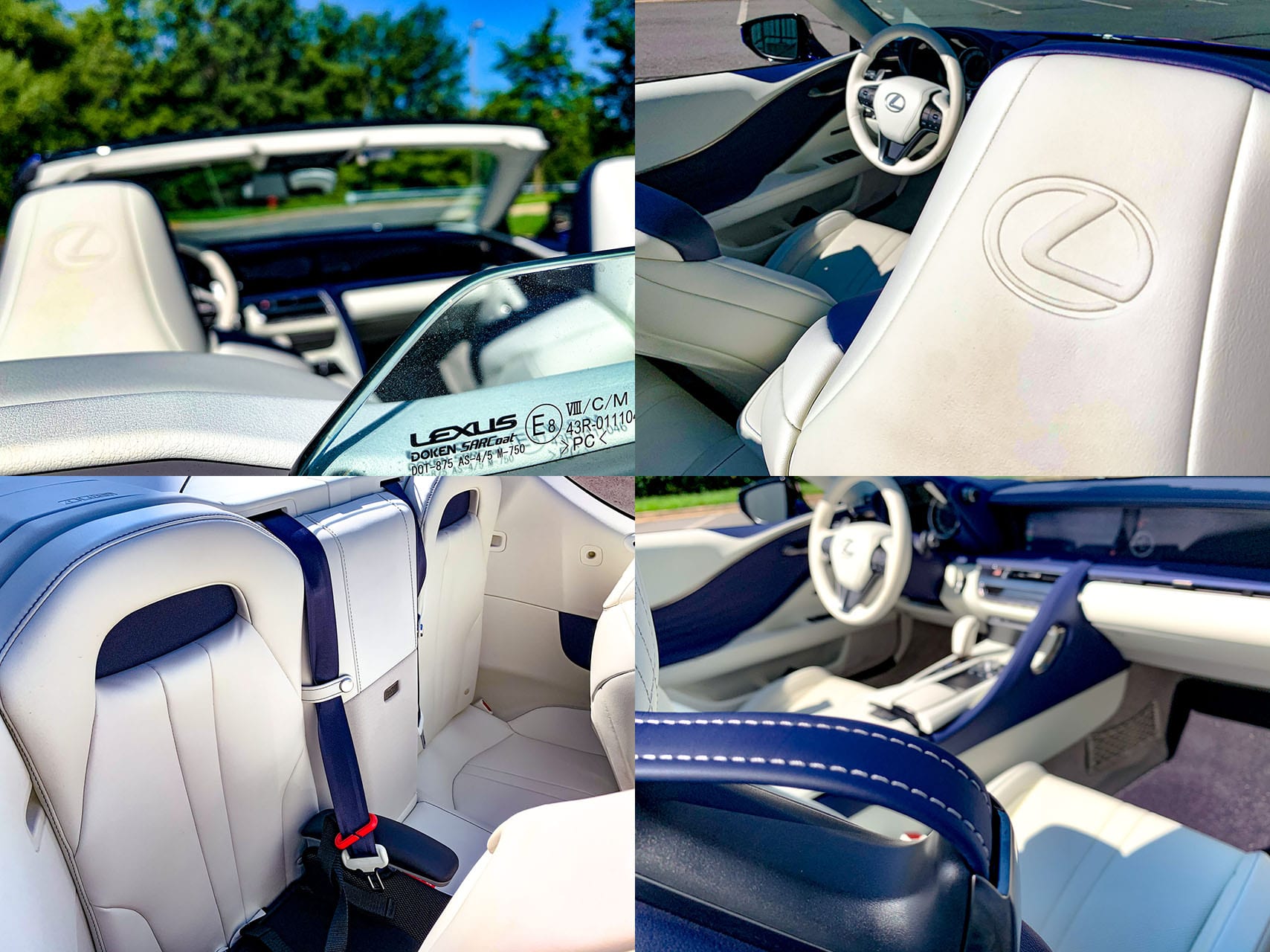 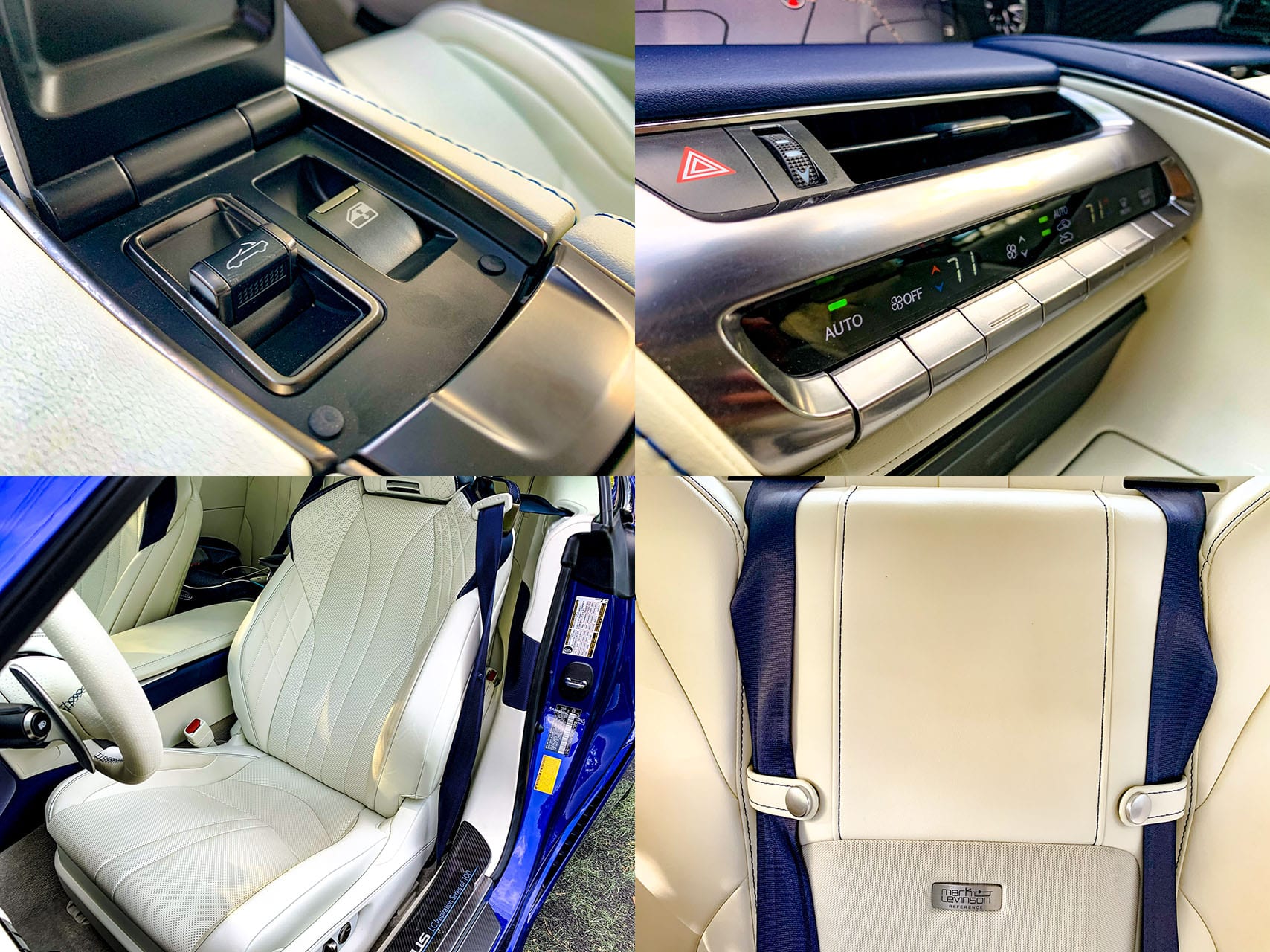