Few cars came onto the automotive scene like the original Acura NSX. It’s a bit cliché now, but it truly added the concept of “reliability” to the conversation about supercars that previously only included “looks” and “performance”. The original NSX was discontinued in 2005, and despite an announcement of a replacement in 2007, it took Honda/Acura a decade to get a new one into showrooms. The NSX joined replacements for the Supra, RX7, and the mythological mid-engine Corvette as upcoming cars that seemed to never actually arrive. But in 2016, we finally had the new NSX. And while it’s still powered by a mid-engined V6, just about everything else changed. Acura recently tossed me the fob for a 2020 NSX for four short days. Does it live up to the original?

First, let’s take a look at a quick video where I interview a 911 Turbo owner and an original NSX owner.

The original concept of the NSX was to highlight what was possible at the time. In conceptual form, that was the 1984 HP-X (Honda Pininfarina eXperimental) concept. The wedge-shaped car was rear-wheel drive, had a mid-mounted V6, and showcased some of Honda’s racing pedigree. Oh and importantly, it was produced the same year that development on the OG NSX began. NS-X, apparently means “New”, “Sportscar” “eXperimental”. The X also represents the “unknown variable”, but I’m sure you knew that.

The car squarely targeted the V8 Ferraris of the time, and even Gordon Murray has been quoted as saying that the NSX was massively important to him as an inspiration for the McLaren F1. The NSX was the first car with an all-aluminum body that was mass-produced and was powered by a 3.0L Honda V6 (NA1) that was eventually upgraded to a 3.2L (NA2).

Even though Honda discontinued the NSX in 2005, there were still 58 sold in 2006 and 2 sold in 2007 here in the states. It was in 2007 that Honda also announced that a replacement was in the works and would be in showrooms by 2010. Things looked good at first, as was the way back then, it was going to have a V10 engine. We saw the Acura ASCC (Advanced Sports Car Concept), and it seemed like it would happen. Honda even fielded the HSV-010 GT starting in 2009 as the successor to the NSX Super GT in the Super GT series. However, the worldwide financial crisis meant that the actual NSX development got shelved. 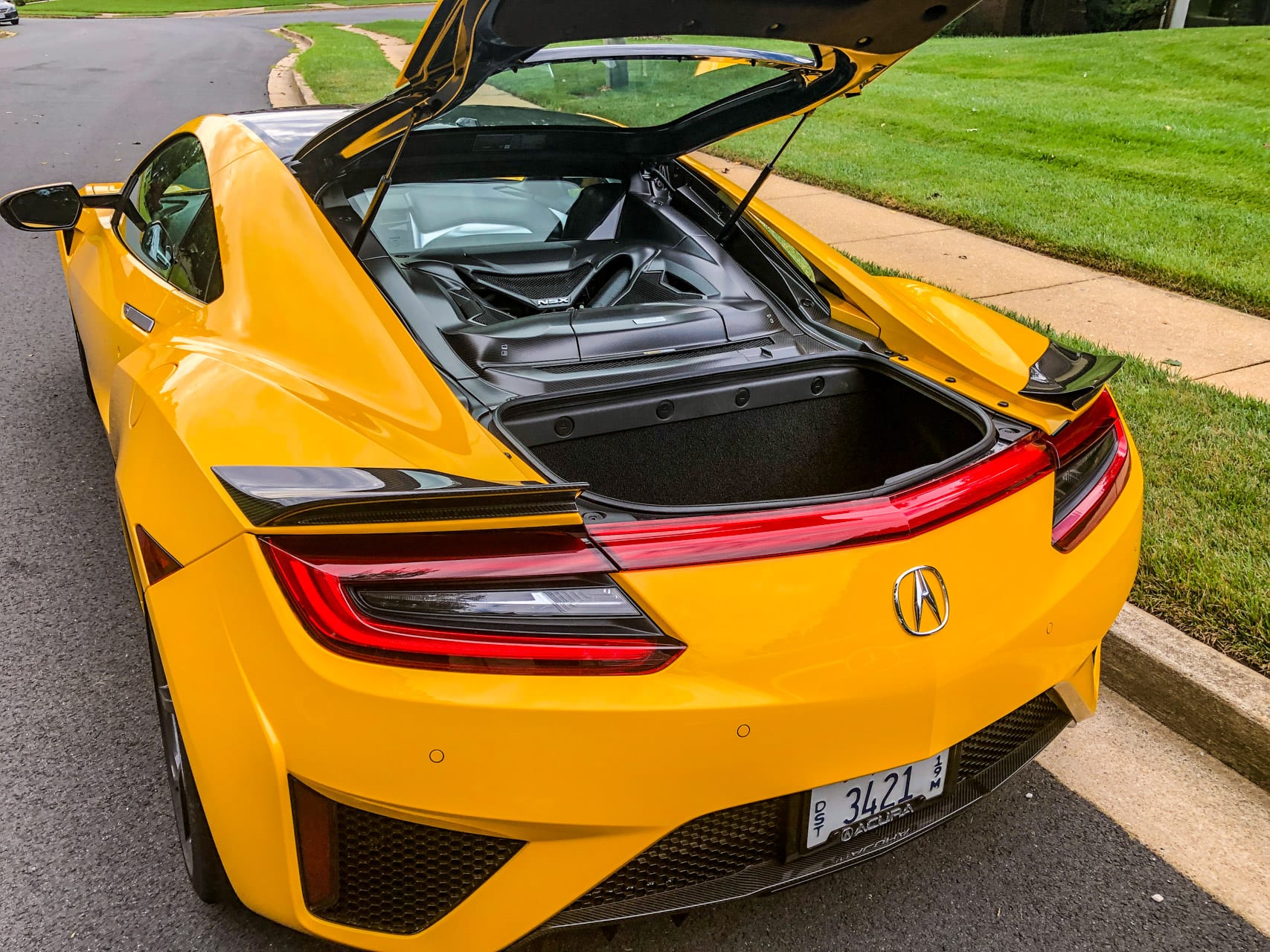 In 2011 we got word that a new NSX was back in the works. Huzzah! In 2012 we got the Acura NSX Concept which actually came really close to the final car that arrived three years later at the 2015 North American International Auto Show. NSX now apparently stands for “New Sports eXperience” and came packed with a host of new technology. Designed and engineered in Marysville, Ohio the latest NSX is now AWD (Sport Hybrid Super-Handling AWD actually) and is powered by a 573 horsepower 3.5 L twin-turbocharged hybrid V6 engine. Power comes through a 9-speed dual-clutch automatic and still makes use of lightweight aluminum and other materials for the space frame.

The NSX is available in nine colors, ours was equipped with Indy Yellow Pearl, a follow-up to the original Spa Yellow. It’ll cost you another $1,000, but it’s amazing. The interior is also customizable with five color options. The semi-aniline full leather power seats will add $1,000.

Y-Spoke wheels are standard and look the best in my opinion, but you can opt for a few other sets at $1,500 a set. Iron brakes are standard, paint the calipers red and it’ll be $700. The fantastic Carbon-ceramic brakes that our car came with were a $10,600 option.

Here is the build summary. Clearly Honda has taken a look at the German and Italian option sheets and done their best to emulate them! 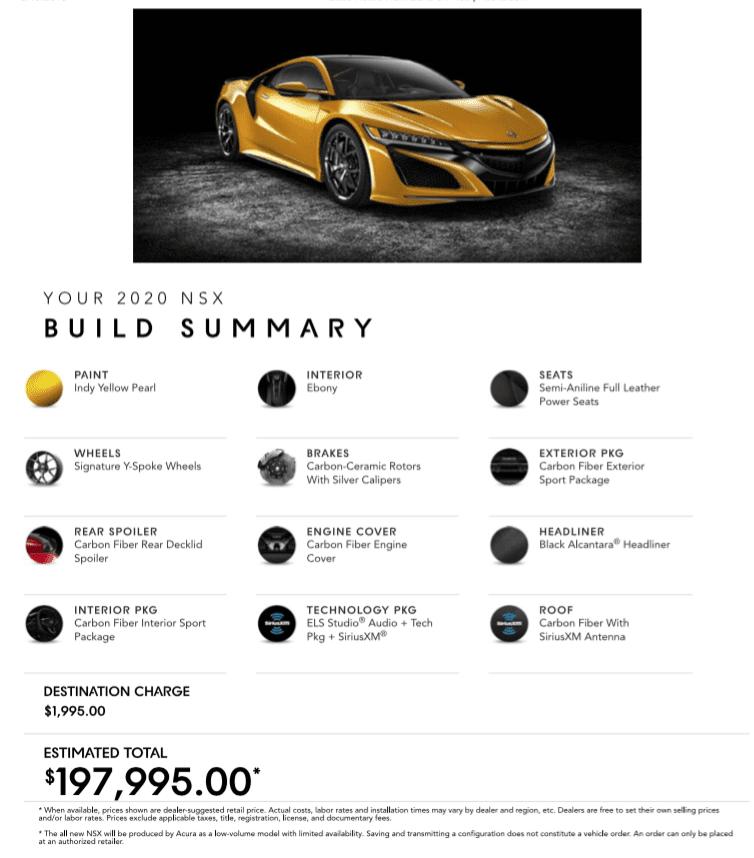 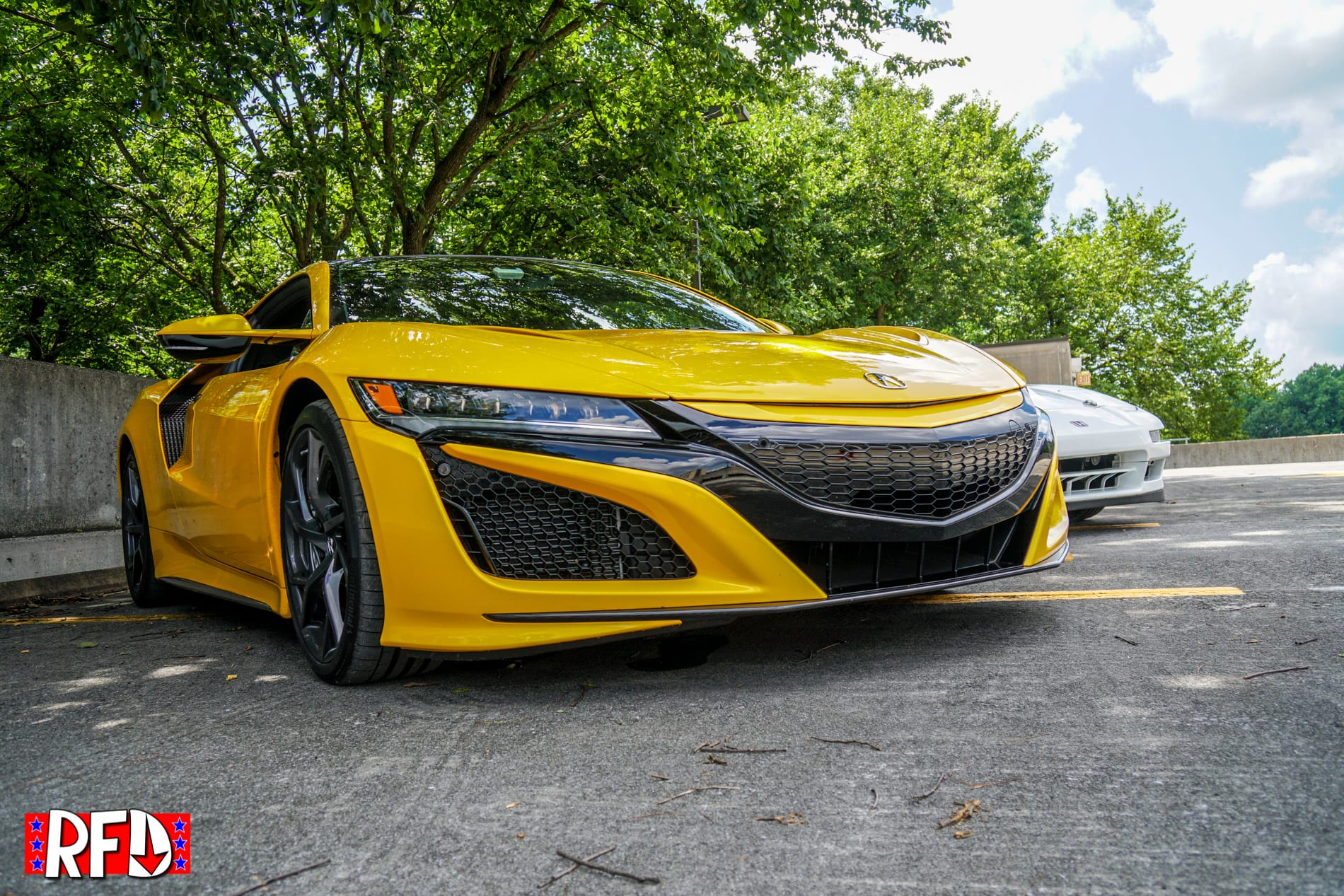 Some have said that the NSX is a bit too staid, a bit too conservative. I suppose when compared to a Pagani, or some other over-the-top hypercar, that could be true. Like the original, the new car comes across as purposeful and handsome in person. Sure, the front end is a bit fussier than it used to be, with more likes streaking this way and that compared to the original parked next to it, but it’s still a damn good looking car. 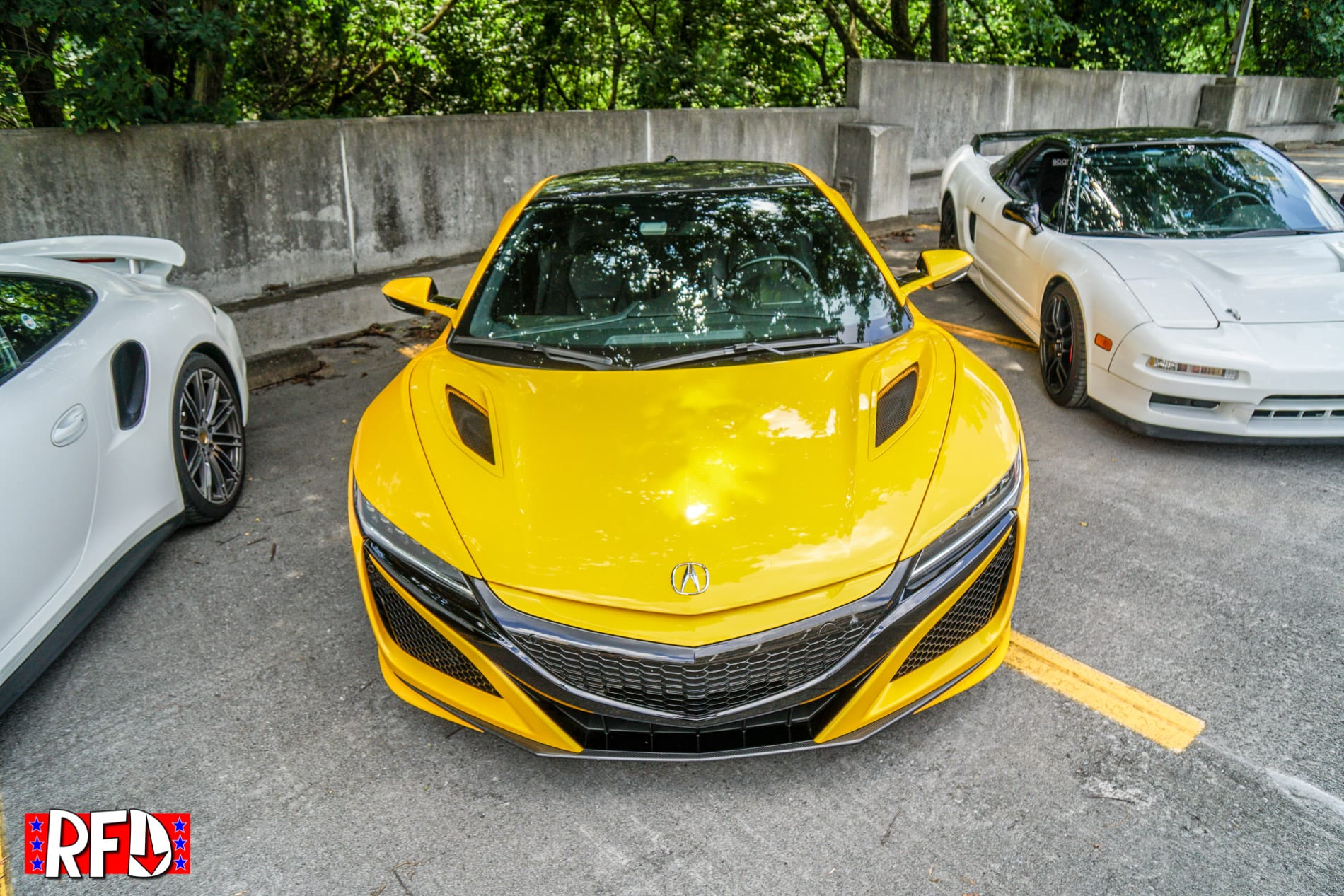 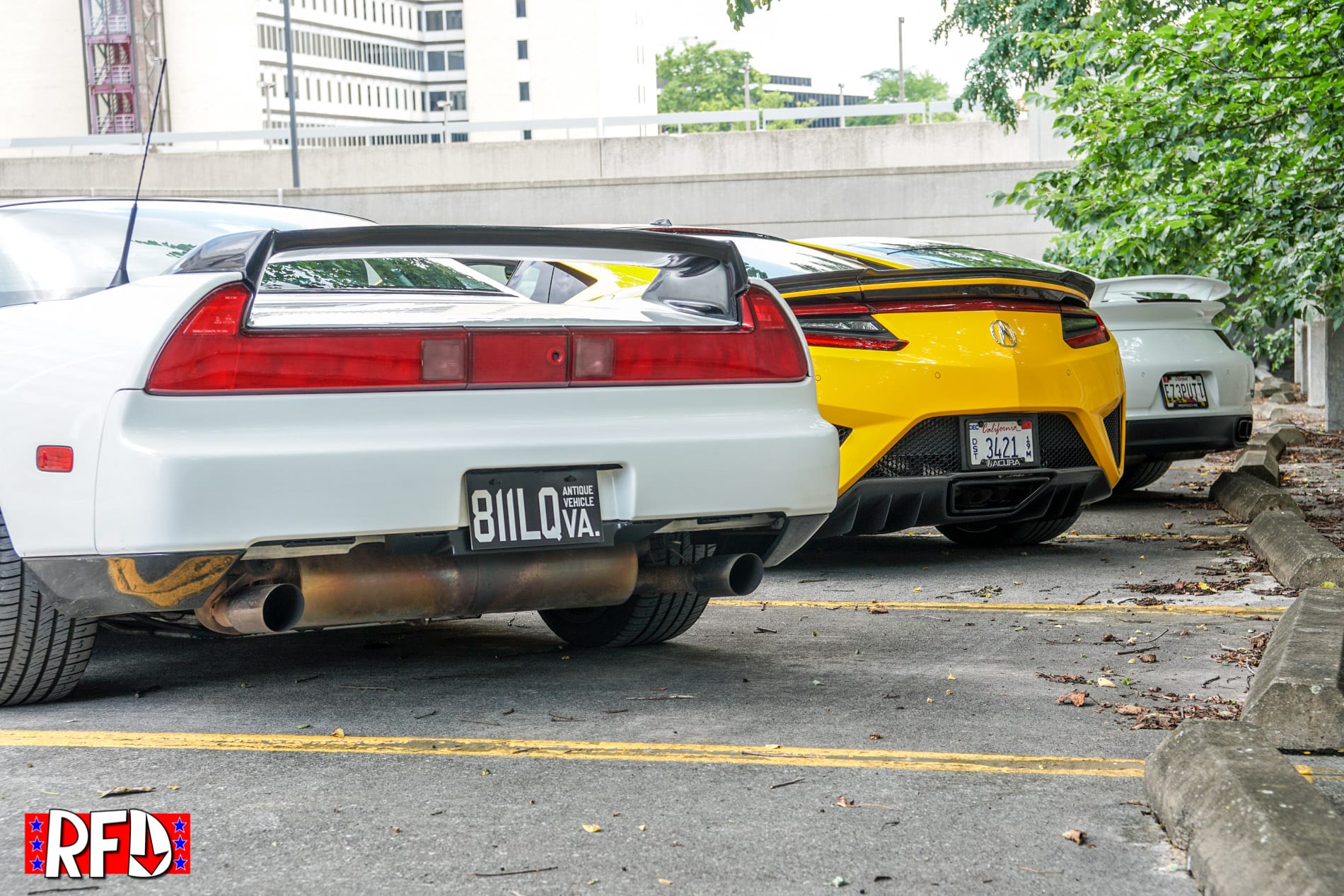 What’s great about the NSX’s scoops and vents is that they are functional. Like the original, there isn’t much on the NSX that isn’t there for speed. At least from an engineering perspective. 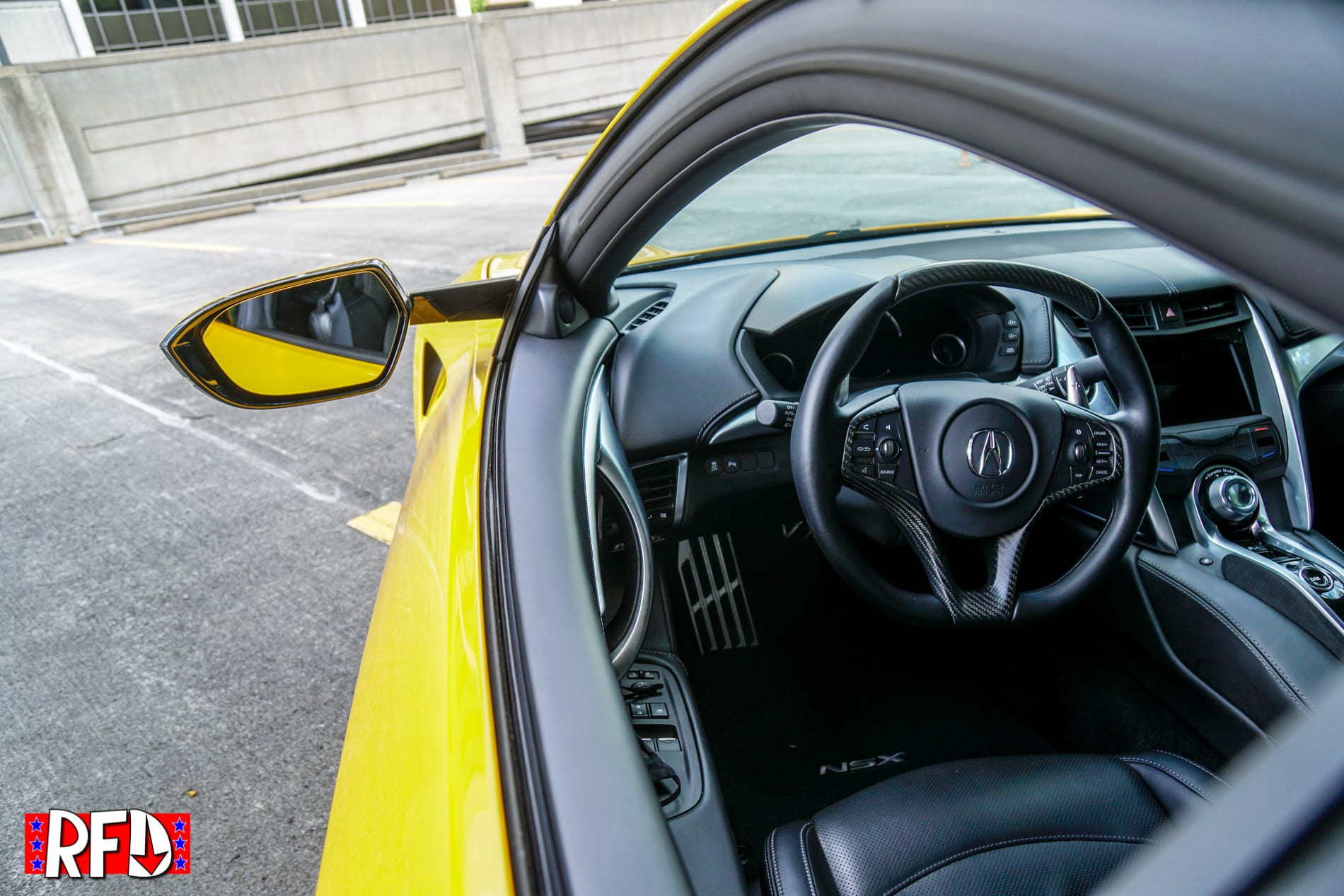 On the inside, the NSX is a different animal than the original. Its new price tag requires a certain level of luxury and materials. As you saw in the video, the NSX’s interior impressed both the 911 Turbo owner and the OG NSX owner. I liked it as well, the materials and fit-and-finish are all first-rate and the interior was incredibly comfortable. While it may not have some of the over-the-top details like Lamborghini’s launch-button starter, everything is where you would expect it to be and this interior style has been passed down to other Acura automobiles. 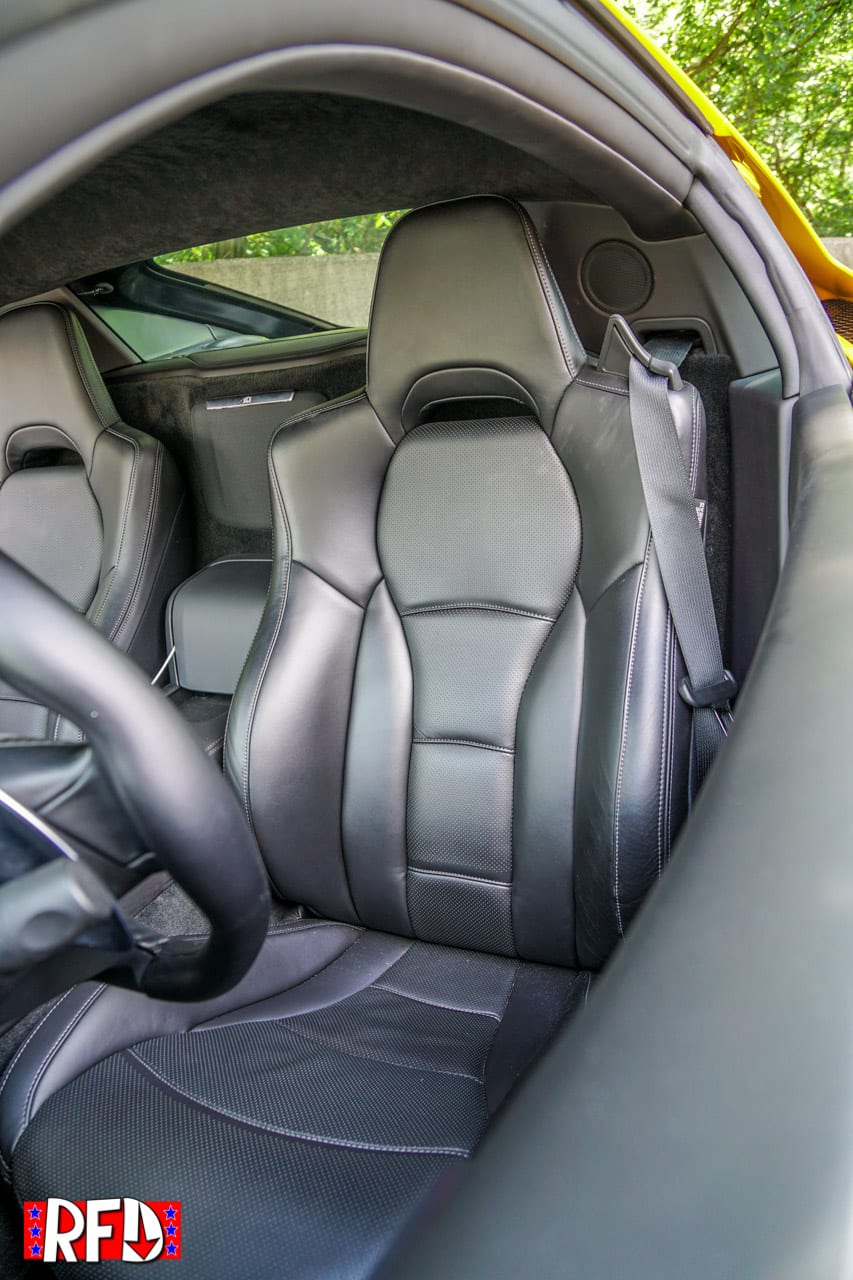 Interior space isn’t quite as generous as your average 2+2, where you can utilize the back seats for storage, but for a long weekend, you’ll be fine. Of note, starting in 2019, the Technology package (Satellite Navigation, ELS Studio Premium Audio, Front/Rear Proximity Sensors, and Power Adjustable Heated Seats) is now standard.

Yeah, yeah, outside, inside, cool, but what’s it like to drive you’re saying? Well, it’s phenomenal. The acceleration from the hybrid system is mind-bending. I’ve driven some supercars on a track, specifically the Lamborghini Huracan LP610-4 and Ferrari 458 Italia, at full chat. While they both made better noises than the NSX, the Acura feels like it pulls harder than either of them do off the line (though the Lambo has a slightly quicker as-tested time to 60). It hurts your brain a bit, it’s like some sort of weird science experiment. Which in some ways it is, but it’s one with a lot of engineering backing it up. Super-hyper-cars like the P1, LaFerrari, and the 918 offer hybrid systems as well, albeit with quite a bit more power (and a lot more MSRP). Think of the NSX as attainable hybrid supercar material, at a cheaper price. 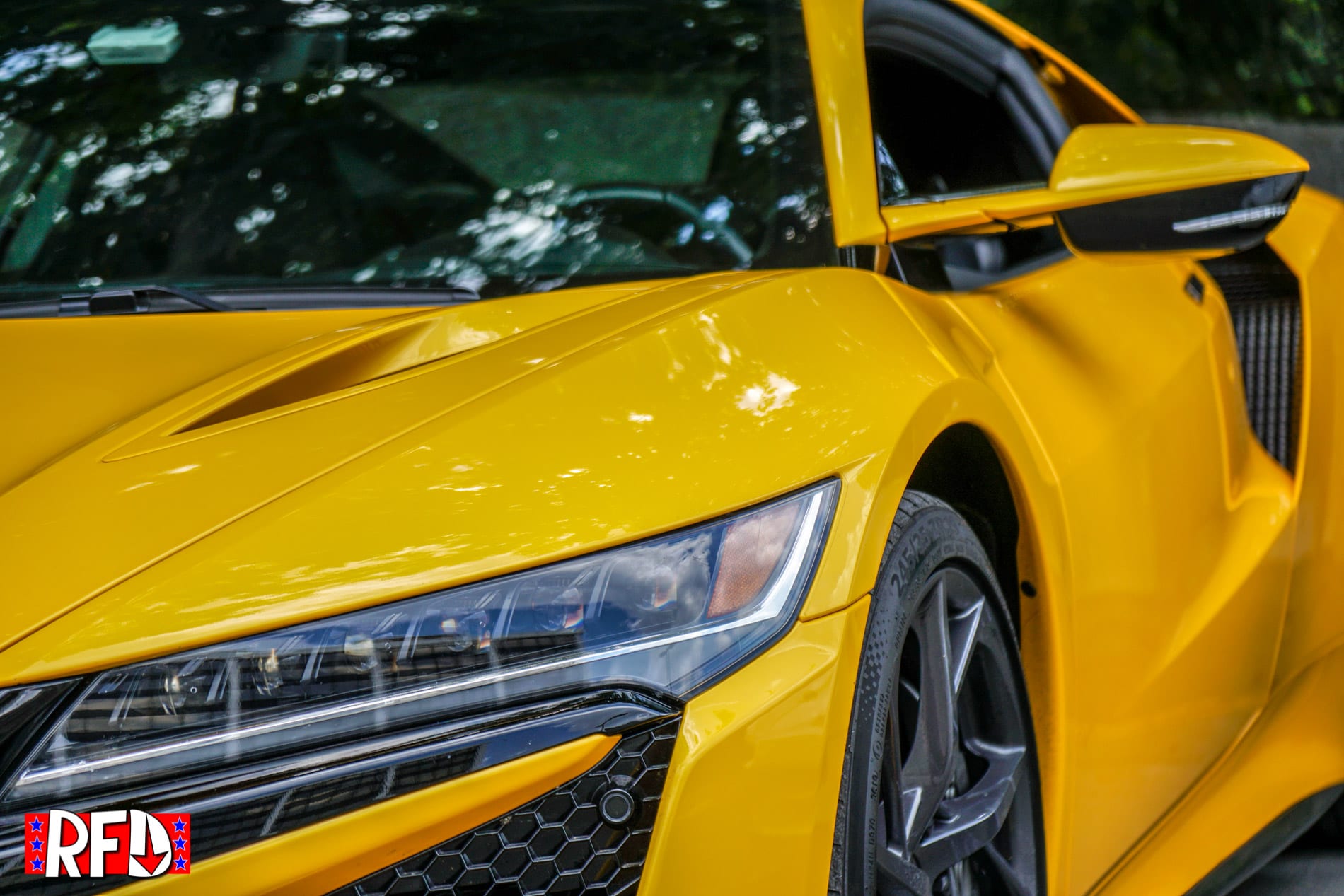 The NSX has a party trick that no other supercar I’ve driven does – silence. You can keep it in full EV mode up near highway speed in full silence. Heck, even “quiet mode”, which still uses the petrol engine, is incredibly easy on the ears. At highway speed, you can drop it down to quiet mode and keep from pissing your wife off. Which was the case during our date night. The valet really liked the NSX, much better than the other car that was parked there when we arrived. 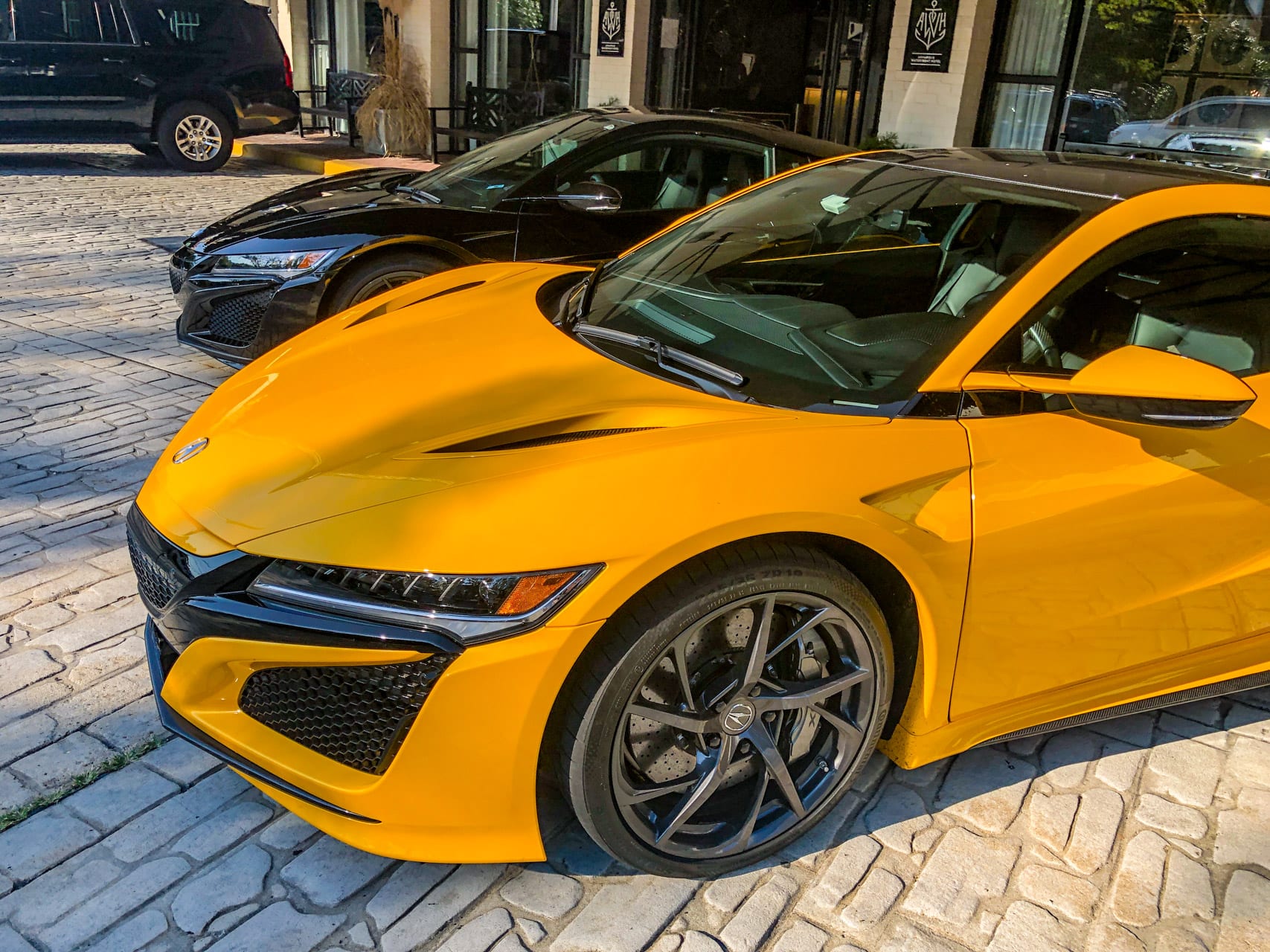 The NSX won’t serenade you like a car with a big V8, it delivers an F1-like scream combined with some mechanical intake noise. It still sounds pretty amazing through a tunnel, which you hopefully saw at the end of the video.

I didn’t get a chance to really test the NSX’s handling near the limit; with a $200,000 sticker price, I wasn’t looking to bin it into a DC guardrail. However, it’s worth noting that 2019 saw a host of updates, mostly in the handling department.

Which brings me to the premise of our little motoring film – will the NSX convince supercar buyers it’s worthy? And will those kids of the 90s who grew up loving the original NSX think it’s good enough? In the end, I’m not sure it matters. The NSX is a great halo car for Acura, it’s in every commercial and fits Acura’s newly regained sporting image. For anyone with $100,000 to $200,000 in your budget for a weekend car, it’s ridiculously good. And if history is accurate, it should be reliable. The “reliable supercar” is back.