Journalists generally shouldn’t have biases. They get in the way of impartial reviews and could lead to errant advice for the reader. However, we’re human, so they very much exist. One of mine has historically been Volkswagen. In a “once bitten, twice shy” type of scenario, I had a horrendous experience with a brand new 2002 Jetta 2.0T wagon and I’ve never been the same since. So I had to put that aside when VW dropped off a new 2020 Passat 2.0T SEL. Is it enough to bring me back?

A bit more on my history with the German automaker. Our 2002 wagon was part of the Bosch coil-pack fiasco where, as each part failed, they barely had enough stock to replace it. Meaning, when our first one crapped out on the DC beltway, I had to limp to the dealer to get it fixed. Since there was one per-cylinder, that happened again, and again. Not only that, the stereo died, the passenger window motor died, a rear taillight failed, and finally the water pump went out. Even that last one surprised the tech, he hasn’t seen that in a car with under 20,000 miles. Everything was covered under warranty, but I spent most weekends sitting in the dealership waiting room. As I drove to the Honda dealer to trade it in, the engine light came on!

Since then, candidly, I haven’t driven many VWs. Aside from a journalist colleague from Autotrader who let me fling his GTI around Dominion Raceway one day while we were filming a BMW M2 video, my only other experience was with a Golf R. It was my first, and last, press loaner from Volkswagen. It was really early in my automotive journalist career and I was quite unaware of the unspoken “500-mile” limit on loaners. To my credit, it wasn’t in the loan agreement, but apparently it was just “known” by journalists. How far did I drive? Well, DC to New Orleans and back. So at least 1200 miles each way. Stupid in hindsight, and it got me quickly removed from the VW loaner list. Until now! Whether the current VW rep remembers that or not, I’m unsure. They do now. 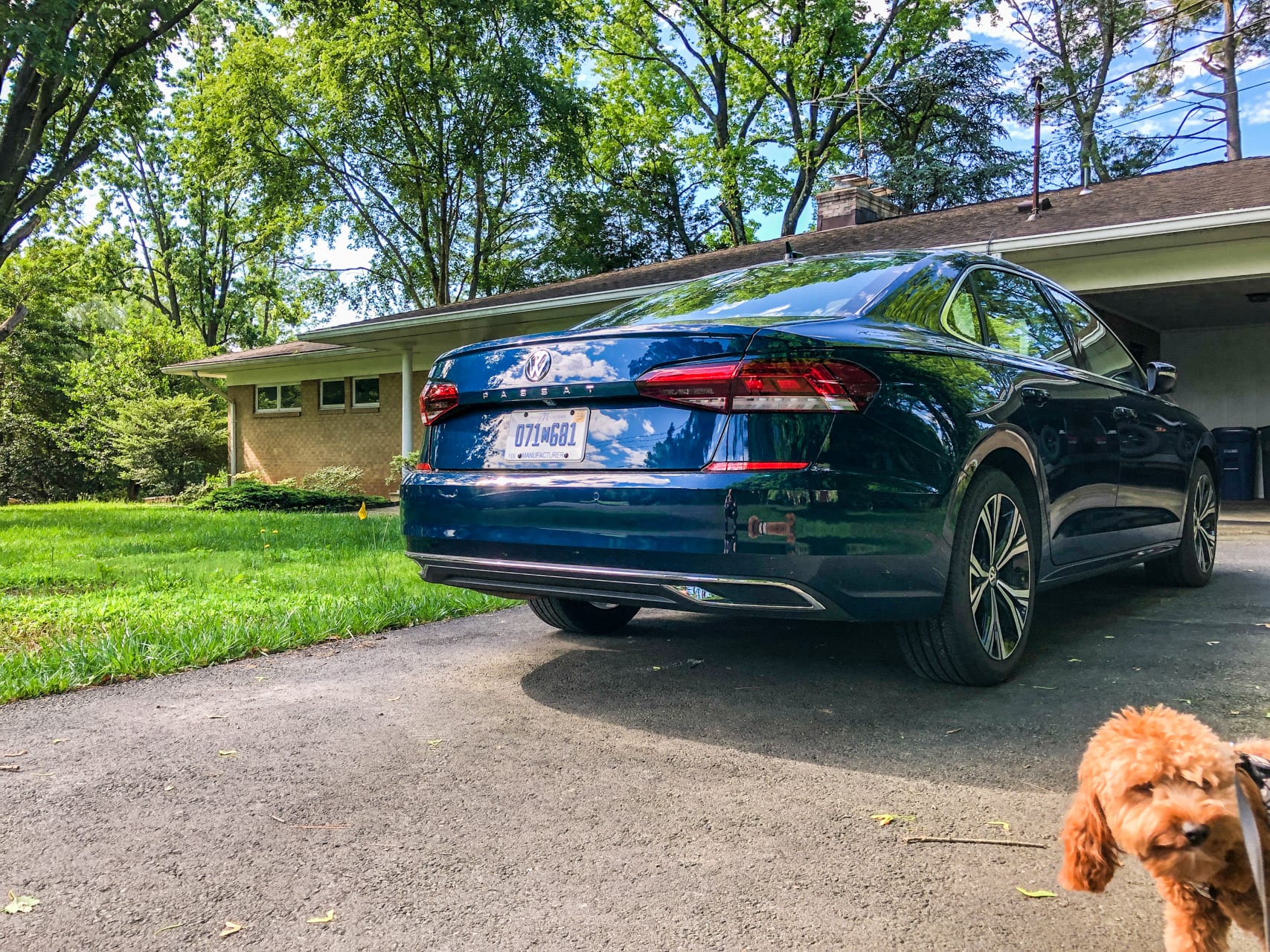 Dublin the puppy doesn’t have any biases, at least from an automotive perspective. He f’ing hates squirrels though.

I drive a lot of press cars, not bragging, that’s just factual. So it’s hard to get excited about every car. I had the Passat dropped off on a day where they took the keys to a 2020 Toyota Supra that I had been driving the week prior. It was a hard pill to swallow, but I was looking forward to seeing what’s what with the 2020 Passat.  So here’s a quick rundown of what you’ll be looking at if you are in the market for VW’s midsize sedan.

Like most automakers, VW delivers a handful of trim levels starting at the base S and leading up to the more luxury-focused SEL that we tested. Under the hood of all Passat models is the long-running turbocharged 2.0L four-cylinder engine making 174 horsepower and 206 lb-ft of torque. Unfortunately, this is less power than my 2002 Jetta made with it’s 1.8L turbo engine (180). The Passat trim breakdown is as follows:

The S trim is the entry-level Passat, which means you get cloth seating, but still has pretty solid features like:

Move up to the SE and you’ll get simulated leather upholstery, plus:

My favorite, from a styling perspective, is the R-Line. It adds nice-looking 19-inch wheels and updated exterior styling bits on the exterior.  Inside you’ll also get an updated instrument cluster, a sunroof, and lane-keep assist.

Our Passat SEL upgrades you to leather upholstery with a memory function for the driver, heated rear seats, a navigation system, and a nine-speaker Fender audio system.  Here, look for yourself. 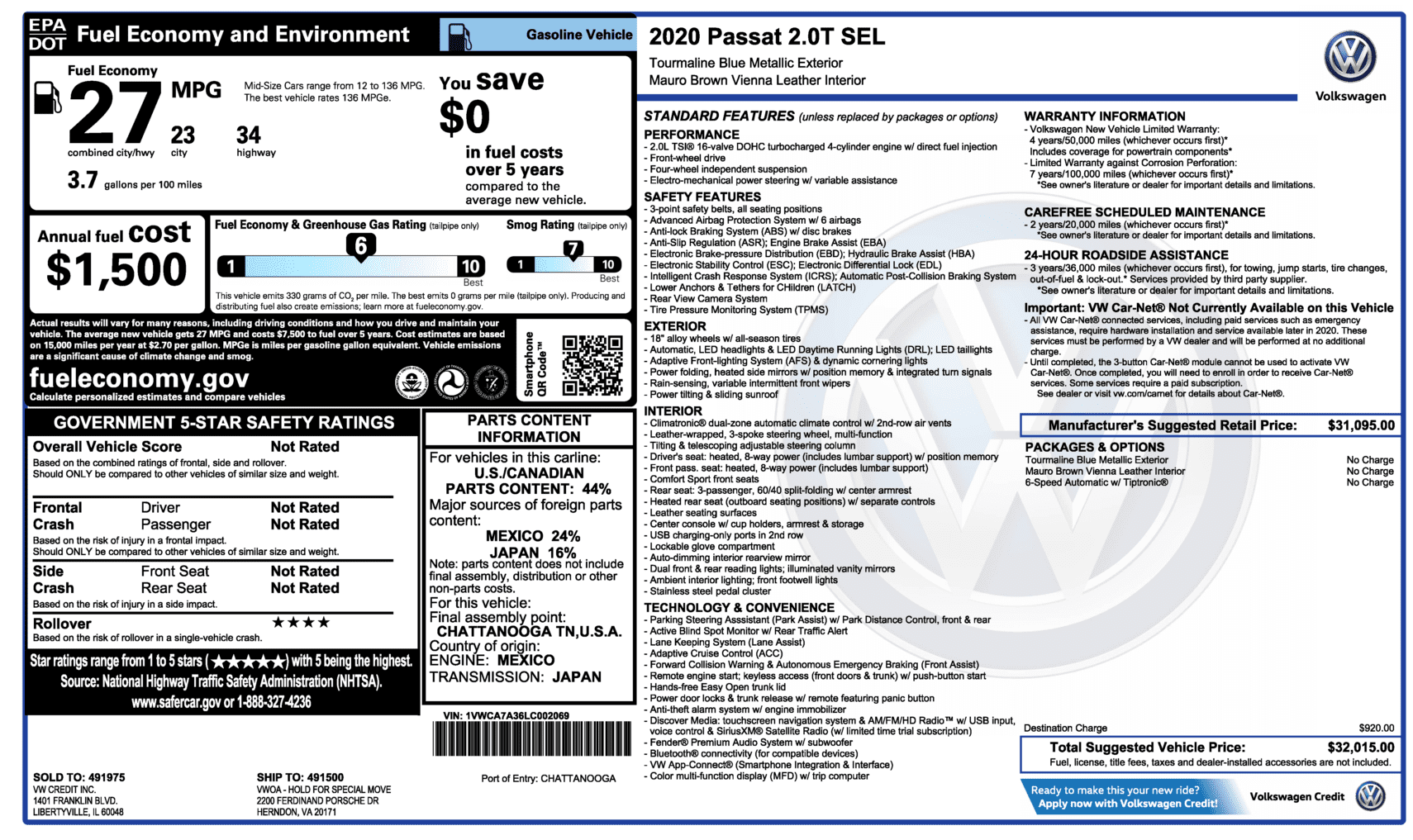 So it’s a classic case of base, base+, sport, and luxury.  Let’s see how it works. 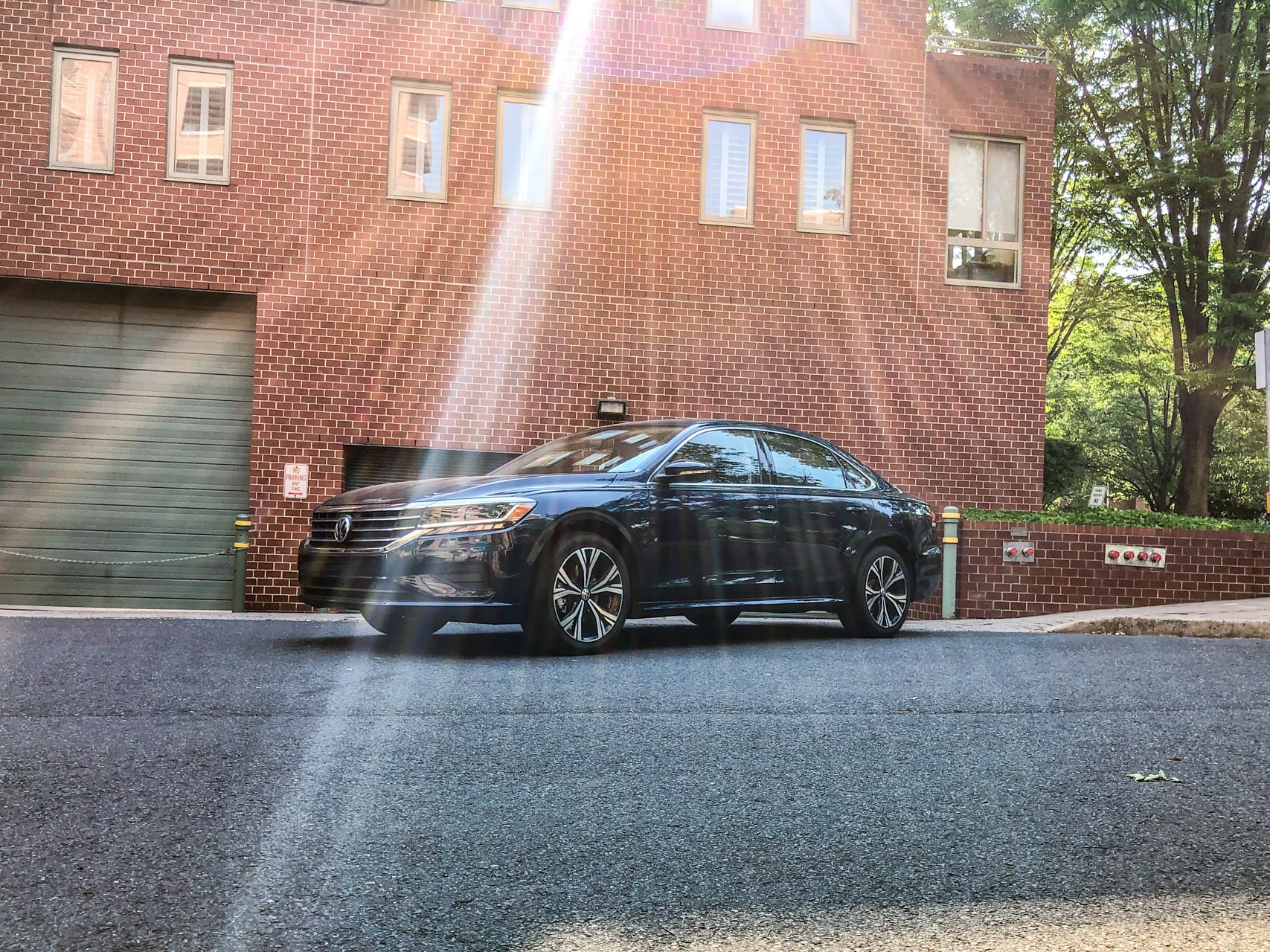 How Does it Feel?

The one adjective that most VW fans and owners have used in front of me is “solid”. From the German door “thunk” to the feeling of the buttons and switches, Volkswagens have always felt solid. Even my 2002 Jetta, which rang in closer to $20K than $30K, felt incredibly solid. It’s clear that there has been a lot of engineering dedicated to every piece. It’s doesn’t reconcile well in my brain that my old VW felt so solid when it was so unreliable. More on that in a bit, but suffice to say that a 2020 Passat has decades of impressive engineering. 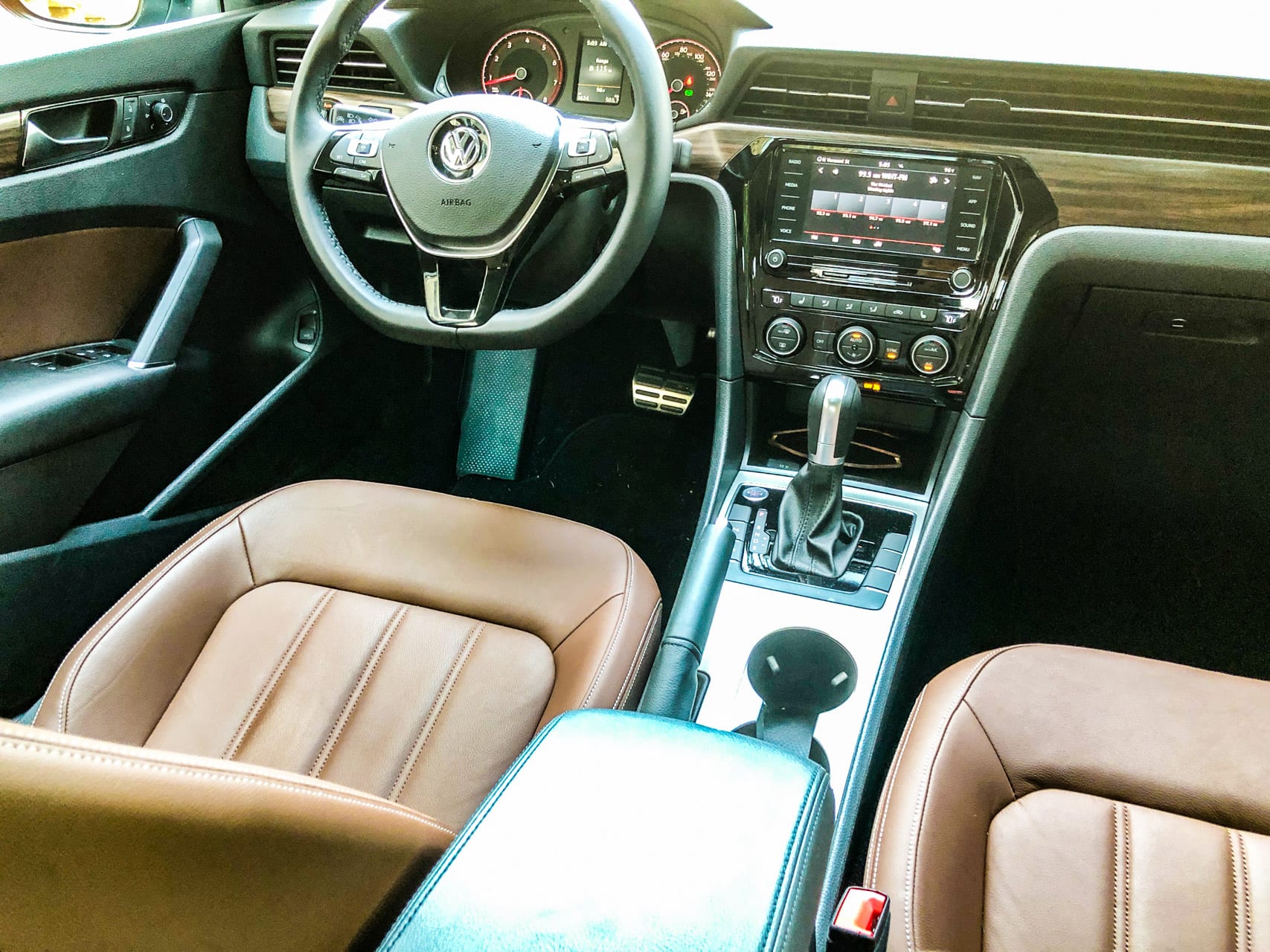 Just look at it, this is a $30,000 car! It’s tough to argue with the packaging. From the well-appointed leather, the solid, but not too solid, touchpoints, VW has done a great job of making a good first impression. What the Passat is particularly good at is just being a car. We get wrapped up in performance figures, mile per gallon ratings, and cubic inches. In the end, most people just want a car that gets the job done. Our enthusiast community is the minority, and the Passat delivers an enjoyable driving experience without being just another commuting appliance. 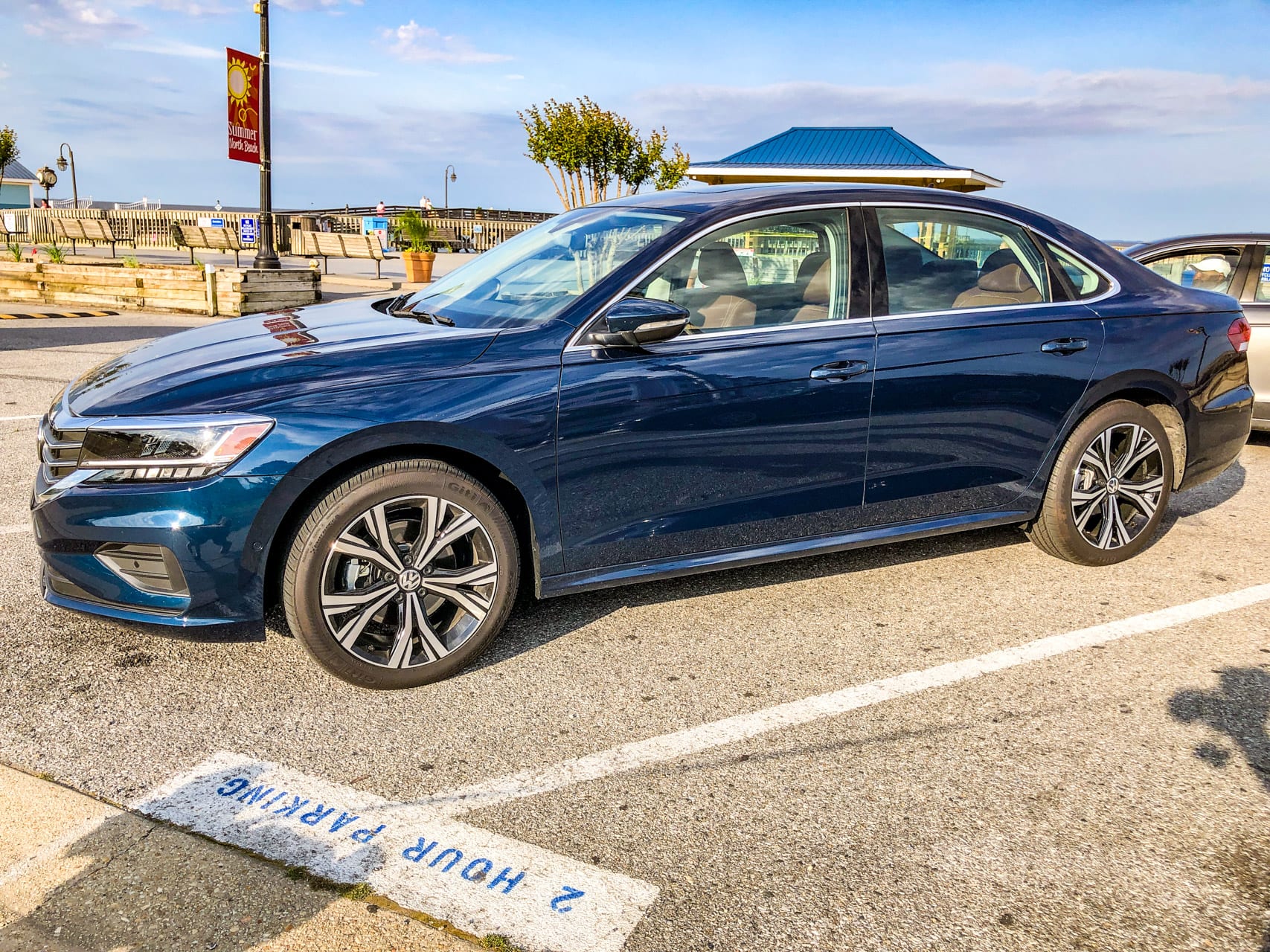 From a driving perspective, it is apparent that the 2020 Passat is still part of the “New Midsize Sedan (NMS)” generation that dates back to…2012. So it’s not particularly dynamic, but like the interior, it feels like it has evolved over time. At 3325 lbs. it’s pretty light for a full-size sedan, which means that the underpowered 2.0L engine doesn’t have quite as much weight to haul around.

The real question for people like me is, is it reliable? Well according to our pals over at Repair Pal, generally it is. From their site “The Volkswagen Reliability Rating is 3.5 out of 5.0, which ranks it 12th out of 32 for all car brands”. And sure, the company is looking for some redemption on another level after some bad press. That, along with the crossover craze, has likely contributed to the Passat’s aged generation.

Back when I first started driving, normal midsize cars like the Passat were well spec’d at $23,000, and entry-level luxury cars like the Audi A4 cost around $32,000 with a few optional extras added. Inflation, and the overall expansion in the size of most car models that are still around, have meant that those price tags have risen. I can say with certainty, what you get at the near-$30,000 mark with this Passat SEL is quite good and a bit more interesting than staples of the midsize segment. It’s hard to argue that Accord and Camry aren’t getting a bit more interesting of late, so VW needs to consider what it’s going to do with the Passat.

Johan de Nysschen, the chief operating officer of Volkswagen’s American division recently was quoted as saying “The Passat is a car that has a finite lifespan in terms of our planning”. Does that mean VW will follow Ford’s lead and just stop making sedans? Or will the Passat evolve into something electric? I guess time will tell. 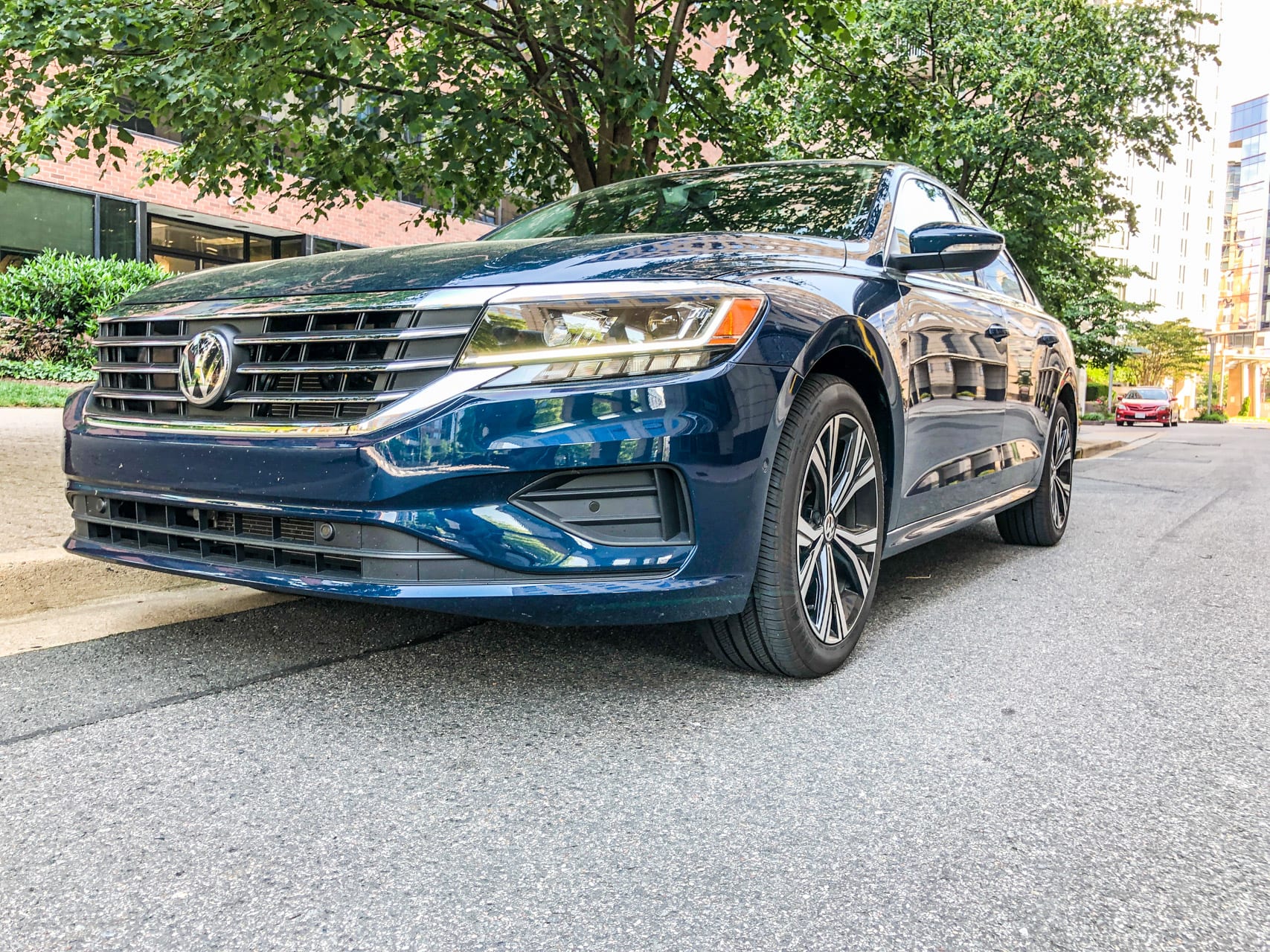 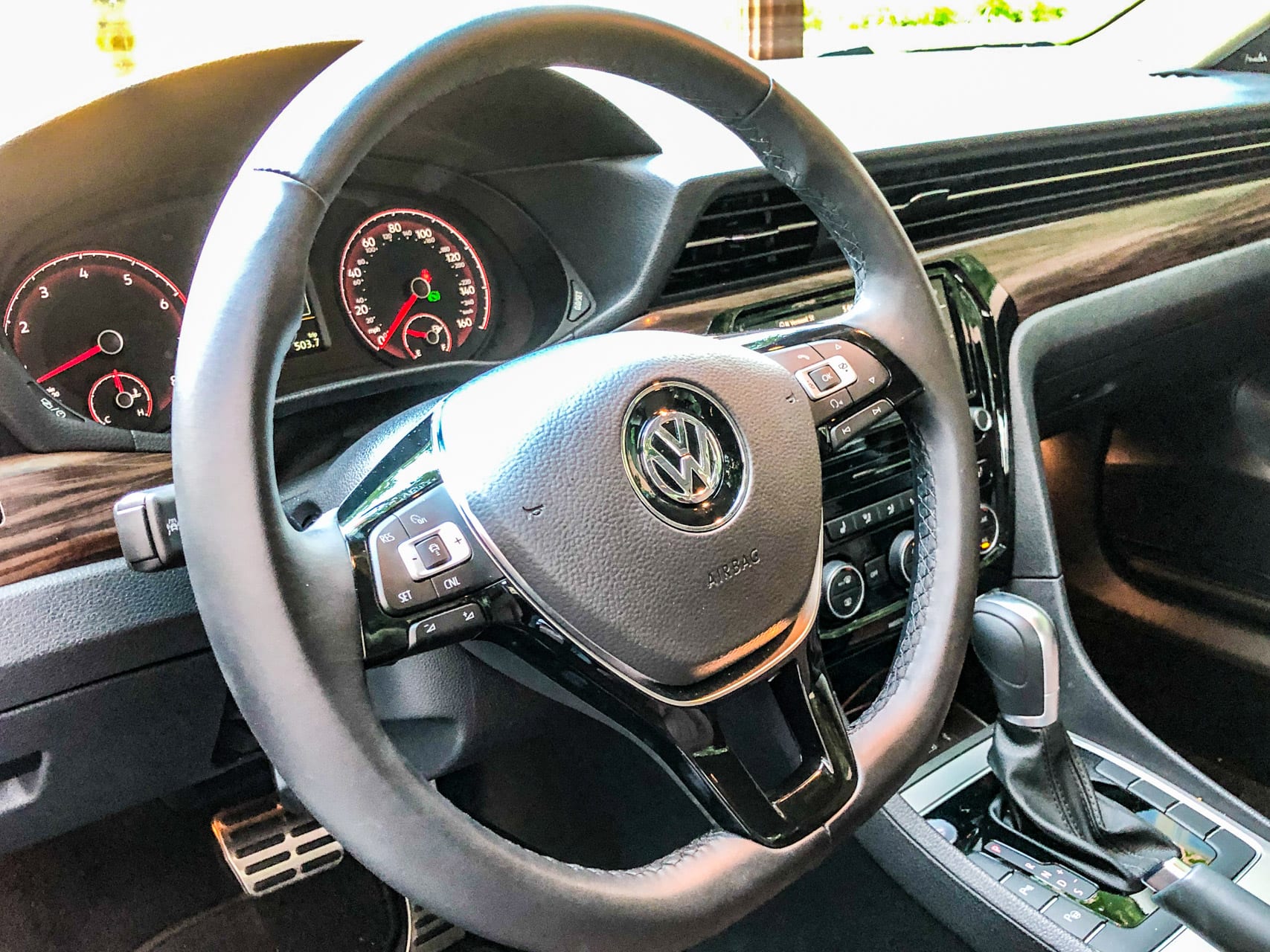 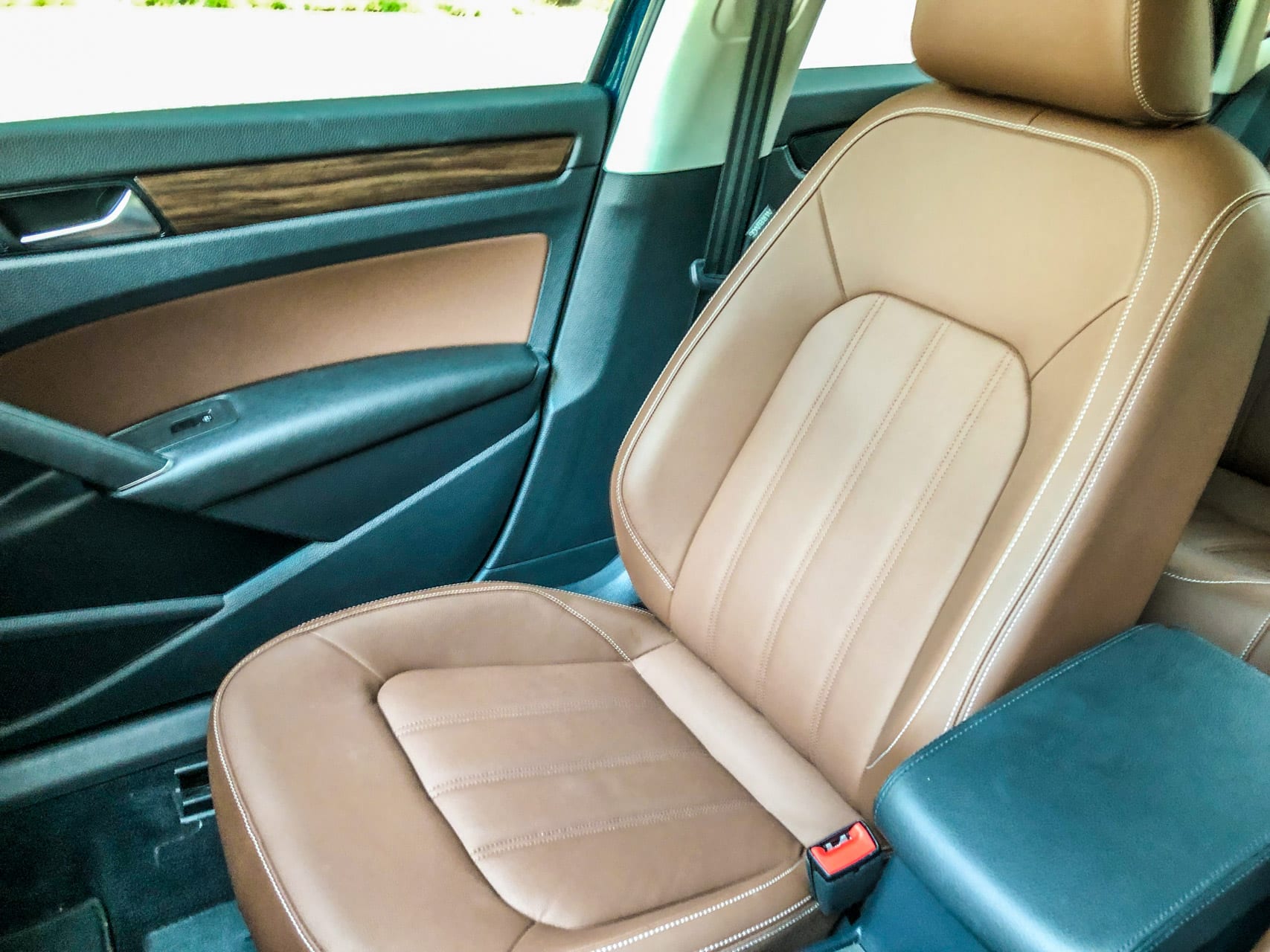 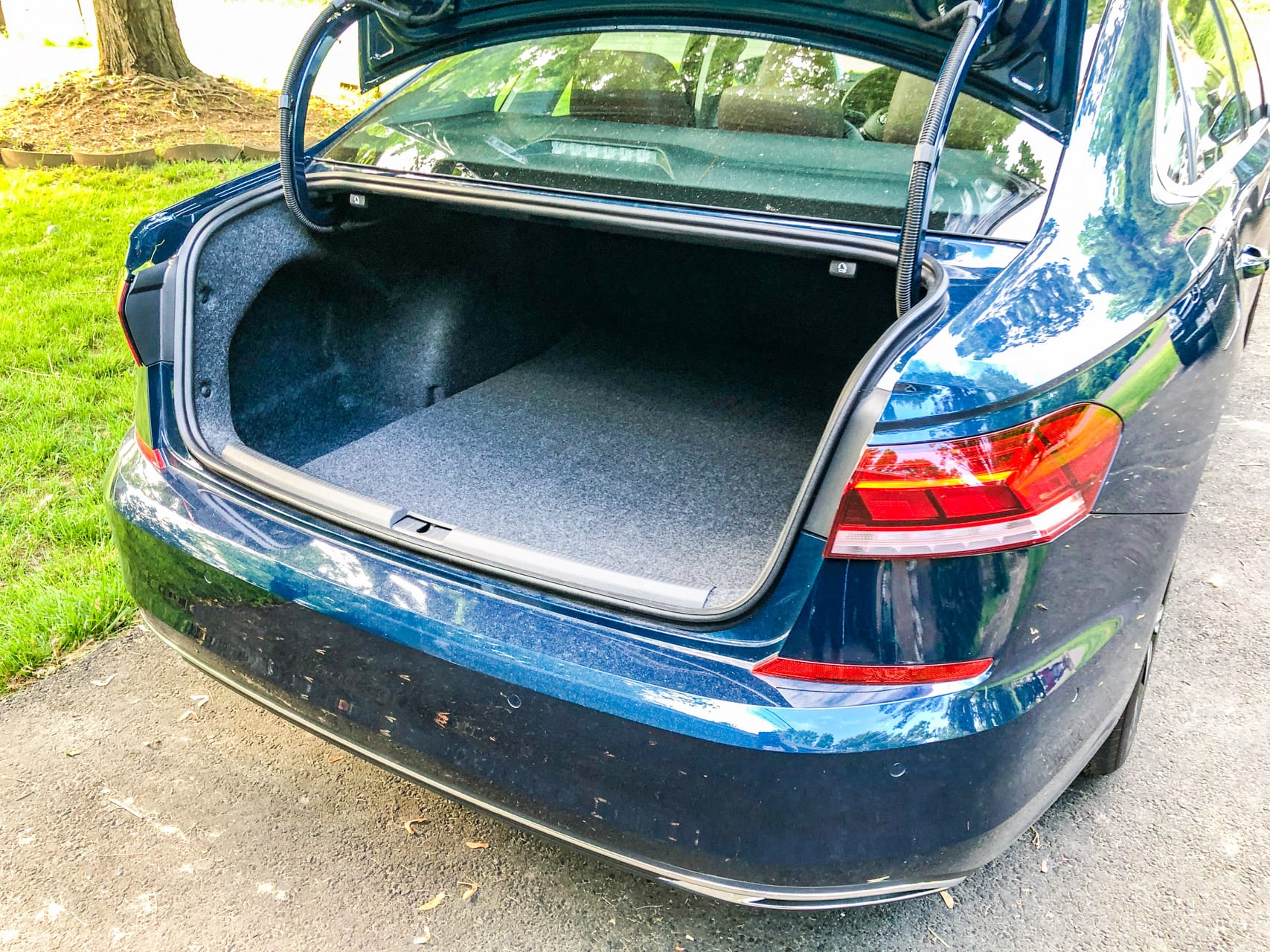 Disclaimer: Volkswagen provided the Passat for the purpose of this review. All images copyright William Byrd/Hooniverse 2020 except where otherwise noted.