The 2020 Mazda3 is flat out SEXY.  If you told me this was a rebadged and slightly tweaked Alfa Giulietta that had been designed by Pininfarina I’d not think twice about it.  The Mazda Soul Red Crystal Metallic is stunning.  In black and white, in the sun, it looks like chrome.  And as you can see, that REALLY sets off the lines of the car. 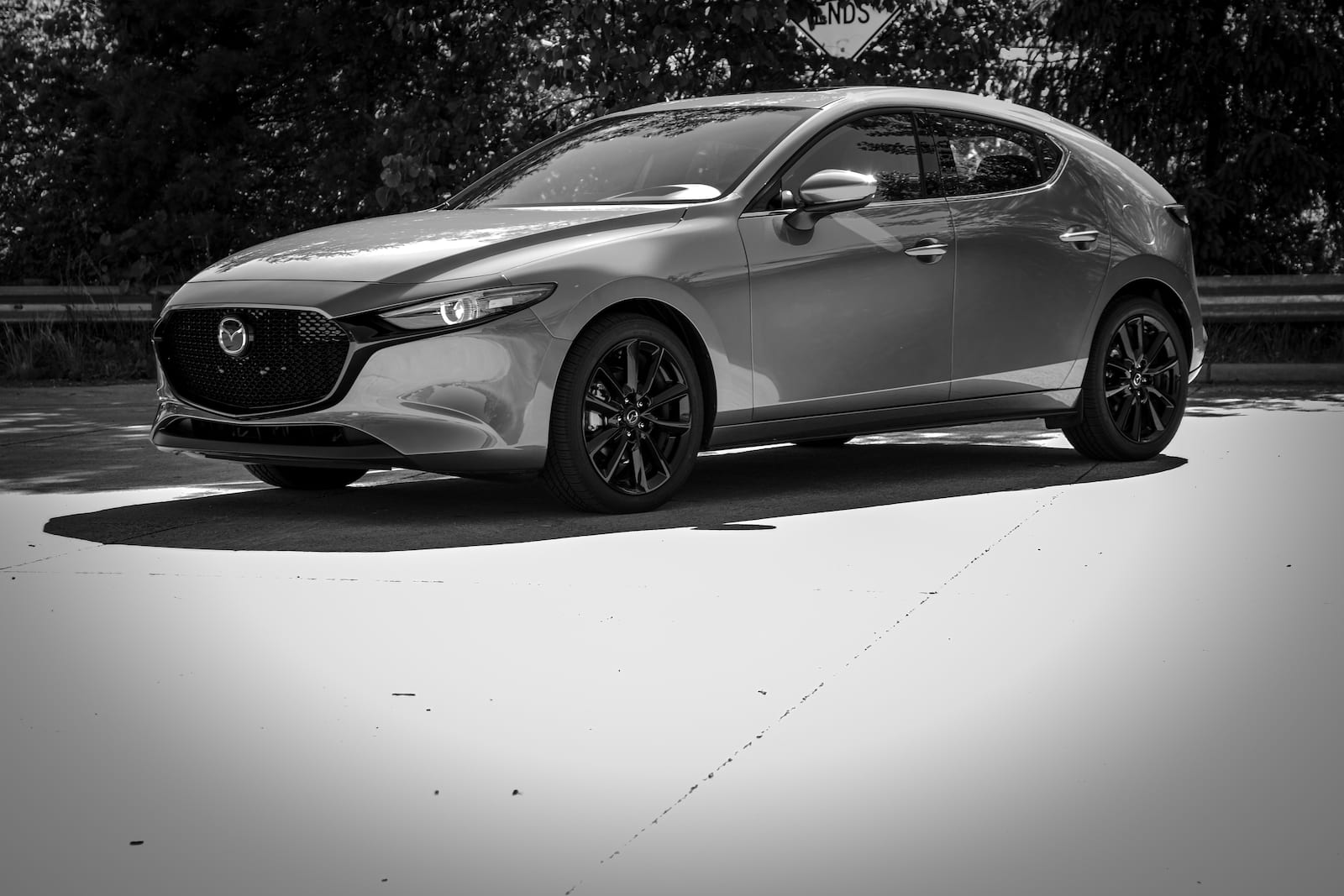 Mazda designers get it with this car.  A few simple clean lines that flow together make for a stunning design.  Now, some of that design will have consequences once we move inside the car, but to look at, you really need never change a thing.  I might want to eliminate the chrome trim around the DLO but that would be it.

Mazda has come a long way with their interiors.  Ten years ago, it was the one area that always let down what was otherwise a best in class vehicle, pretty much across the board.  Now, Mazda may have the BEST interiors in class across the board.  CX-9 vs Telluride might be the only exception. 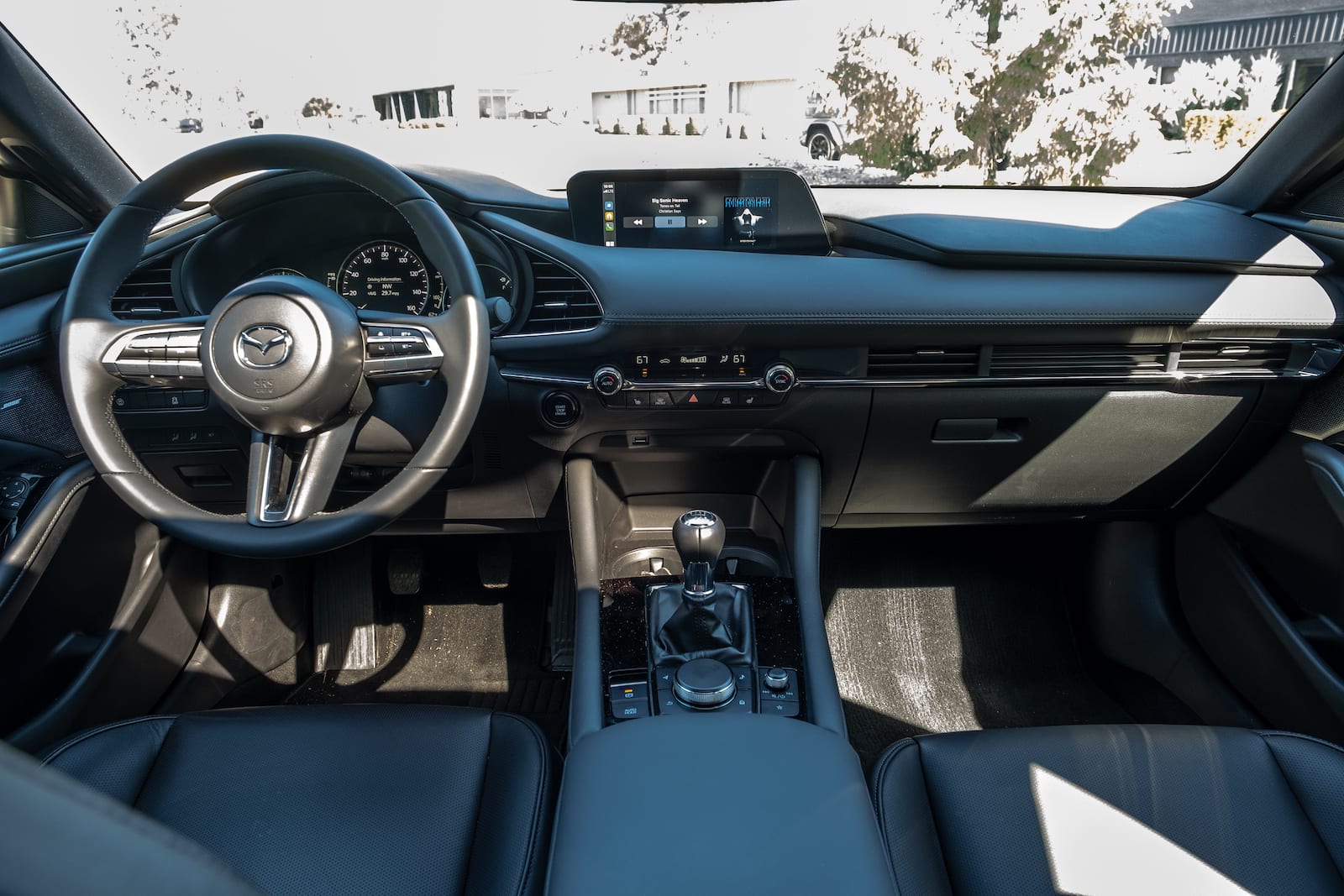 The quality of the materials is good. When you touch surfaces you can feel that the material is more than paper-thin.  There is substance behind the look.  The side of the center console is nicely padded so that your knee has a comfortable spot to rest.  The steering wheel has just the right thickness.  The range of adjustment with the manual tilt and telescopic for the wheel means anyone and find their best driving position.

Back seat room is average, I could sit behind myself, but there wasn’t much extra room.  The cargo area was quite large and when you folded the seats down it was expansive.  However, it failed in two major items for me.  Number one, the hatch has a high liftover to the floor.  I forgot to measure but it’s an easy ten to eleven inches.  Number two the rear seats do not fold flat.  They tilt up at about a twenty-degree angle.  Why do I care about these things?  Because it prevents me from being able to take my dog in the car.  Granted I have an Irish Wolfhound, but he does fit in other five-door hatchbacks. 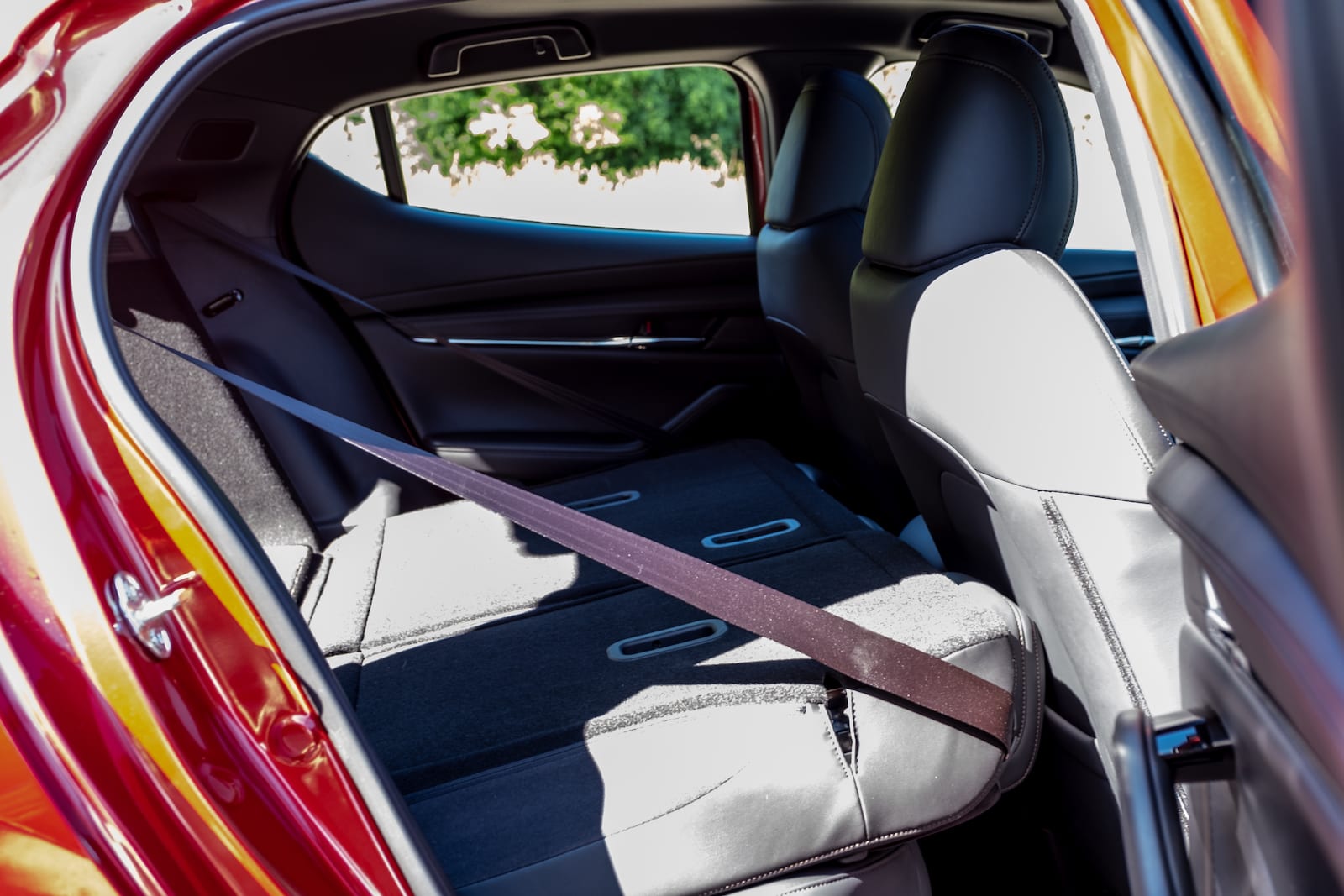 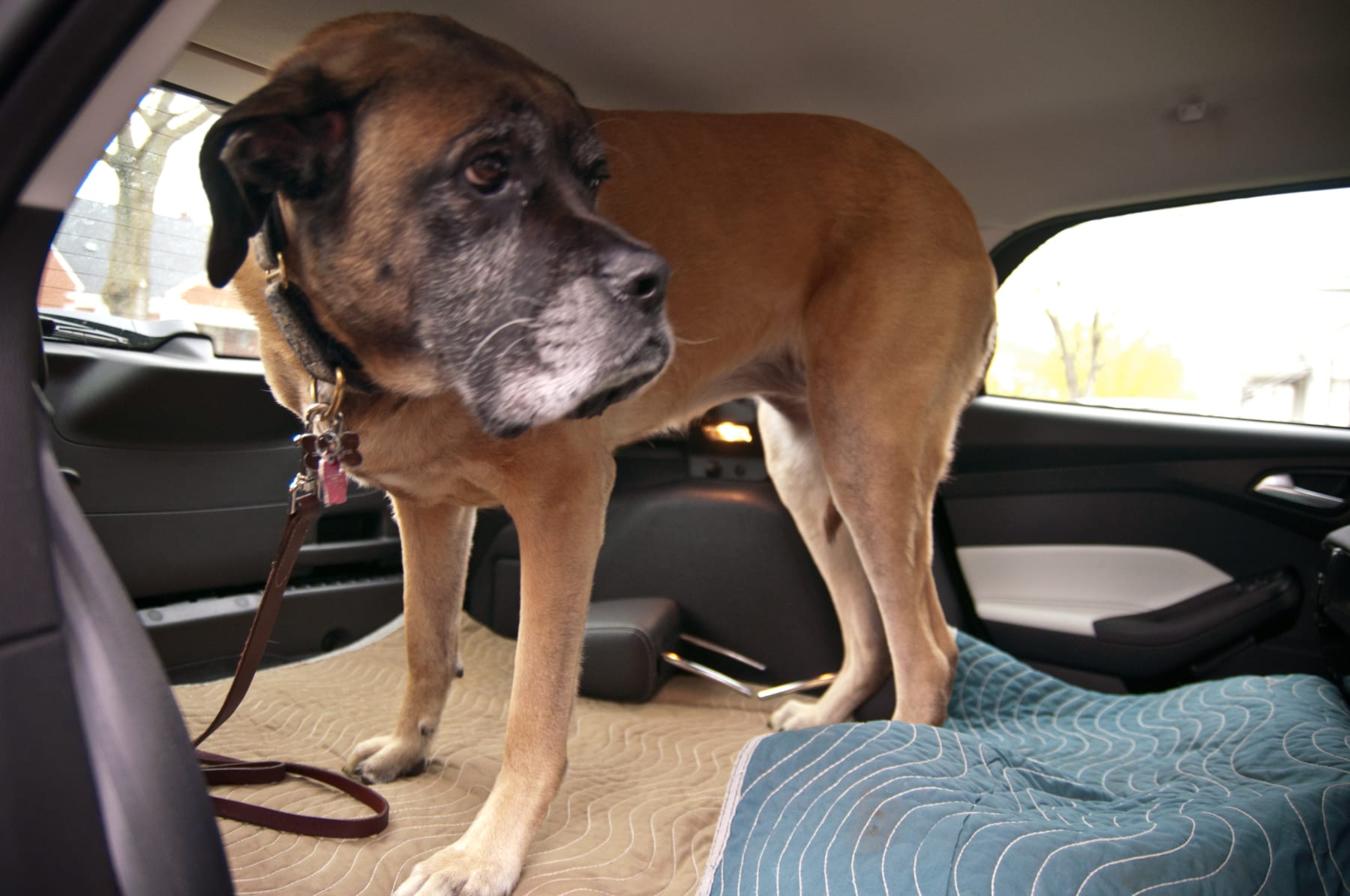 I’m always reminded of a photo I have of my first English Mastiff, Lola, in the back of a 2012 Ford Focus.  She was not a small dog, and with the low lift-over and the truly fold-flat rear seat, she had plenty of room to be comfortable, she could also stand up in it.

One area where the amazing exterior design does come into play is the lack of rear visibility.  If you look much past the b-pillar, you can’t see much, if anything.  It’s easy for a motorcycle to disappear into that spot.  The view out the rear isn’t great either, the rearview camera is your friend here.

I wanted to break this out into its own section here.  While Mazda has improved the UI and UX of their telematics interface, it is still suboptimal.  This is the case where AndroidAuto and Apple CarPlay are superior.  They are cleaner, faster, more intuitive interfaces.  For as BOSE sound system, this one wasn’t bad.  From me, that is HIGH praise.

Where the Mazda3 fails hard for me are the safety nannies.  Lane keep assist, be it visually, auditory or tactually you can not turn it all off.  If Mazda could make a smell to let you know you were within half a foot of the centerline or dividing line, they would.  Worst of all you can turn one or two off, but not all of it. 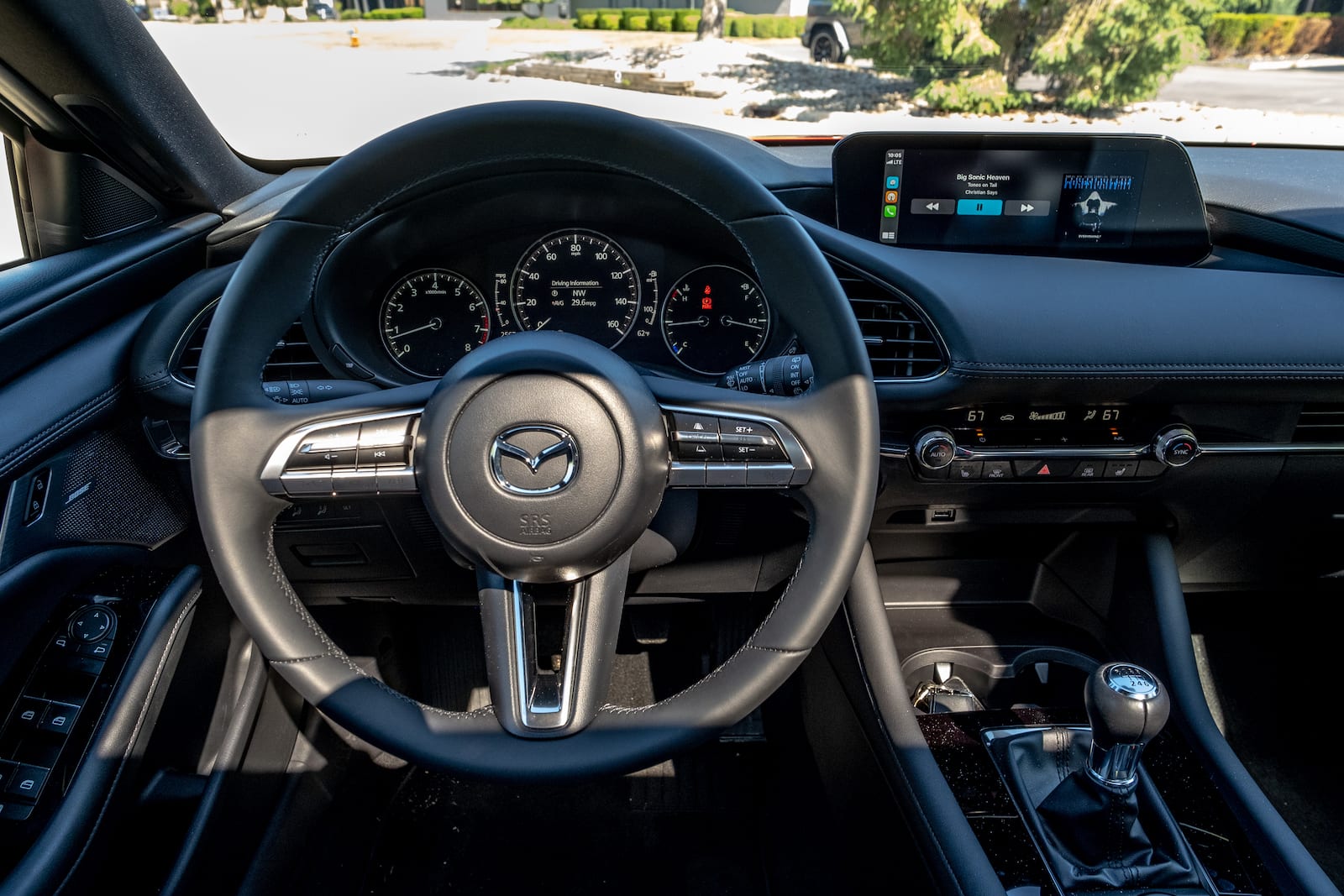 The radar cruise control is also madding.  It is aggressive at keeping distances firstly.  Secondly, as it approaches a vehicle ahead it doesn’t gently roll off the speed, it aggressively chops it.  Third, if you have the cruise set at a speed and you exceed it to pass someone, once you get past them it doesn’t coast you down to your set speed, it cranks the brakes on HARD to get you back.  If you have the speed set and you are manually pressing on the gas to close a gap, and you even think about lifting, once again it jams on the brakes to get you back down to speed.  It is as elegant as a novice sculpture wielding a sledgehammer.

It is impossible to disable the electronic e-brake from being automatic. Oh sure, the owner’s manual will guide you on how to do it, however, after the third or fourth power cycle, it’s back to auto on.  I could do seven hundred words about how annoying, obnoxious, and ridiculous it was in the CX-30 with an automatic gearbox I had after the Mazda3.  A real, manual e-brake would be so much more simple and elegant.  I’ll leave it there. 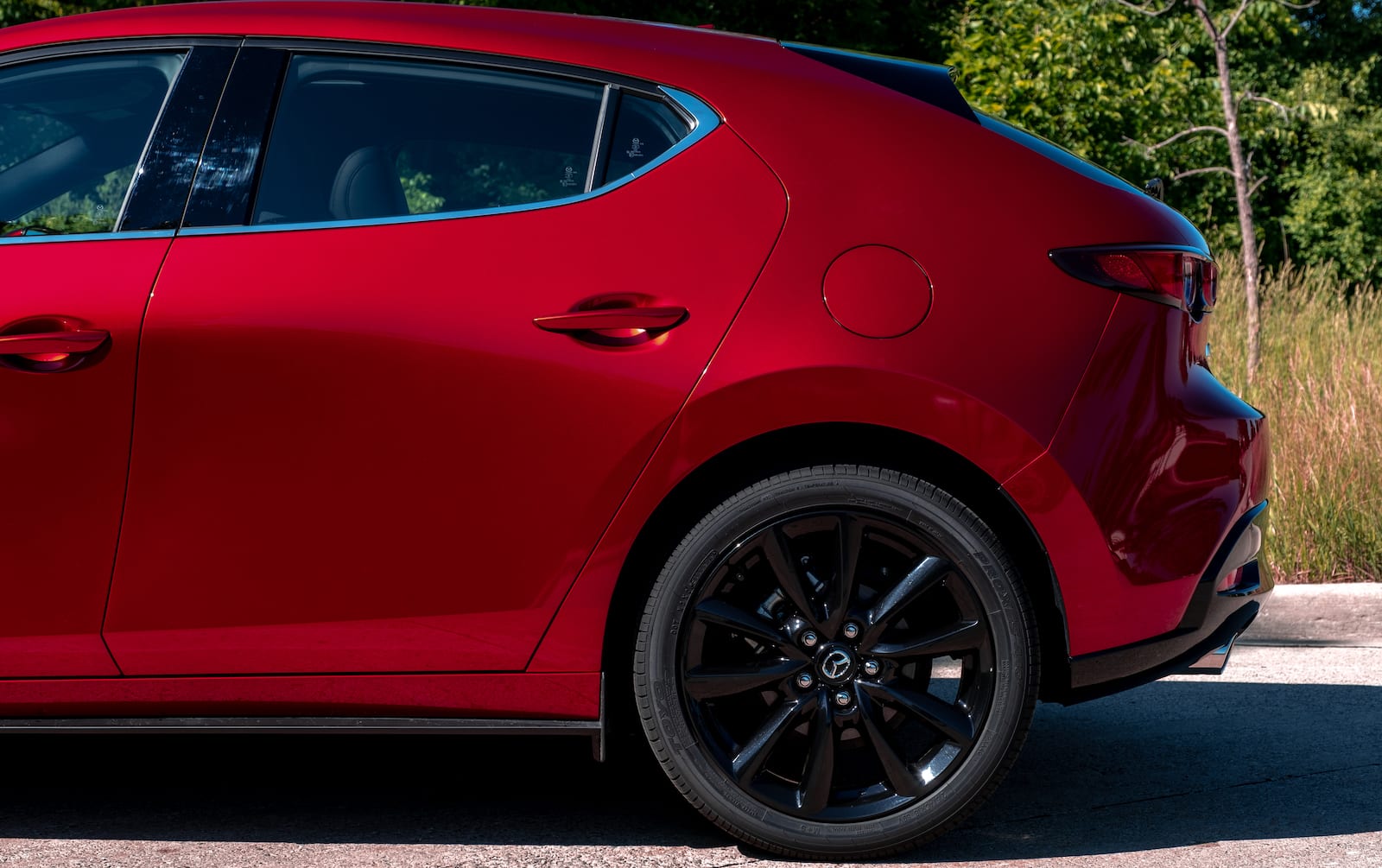 Finally, there are other beeps, boops, and noises letting you know you are not 100% in compliance with something.  The speed on the HUD flashes at you if you are over the posted limit.  On the actual speedometer, it traces a red line if you are past what it thinks the posted speed is.  If you need all that garbage to help you drive, then maybe you shouldn’t be behind the wheel to start.

Mazda’s tries to be the brand that remembers driving is something to be enjoyed, rather than a burden, rants about safety nannies above aside.  From the driving position, to how the controls are laid out, to the feel of the clutch and shifter, it’s about the drive and the driver.  For electronic steering, the Mazda is better than most.  The shifter feel as you go through the gears may not be like the bolt action of a Swiss K31 or a Bighorn TL3, but it is better than most these days. 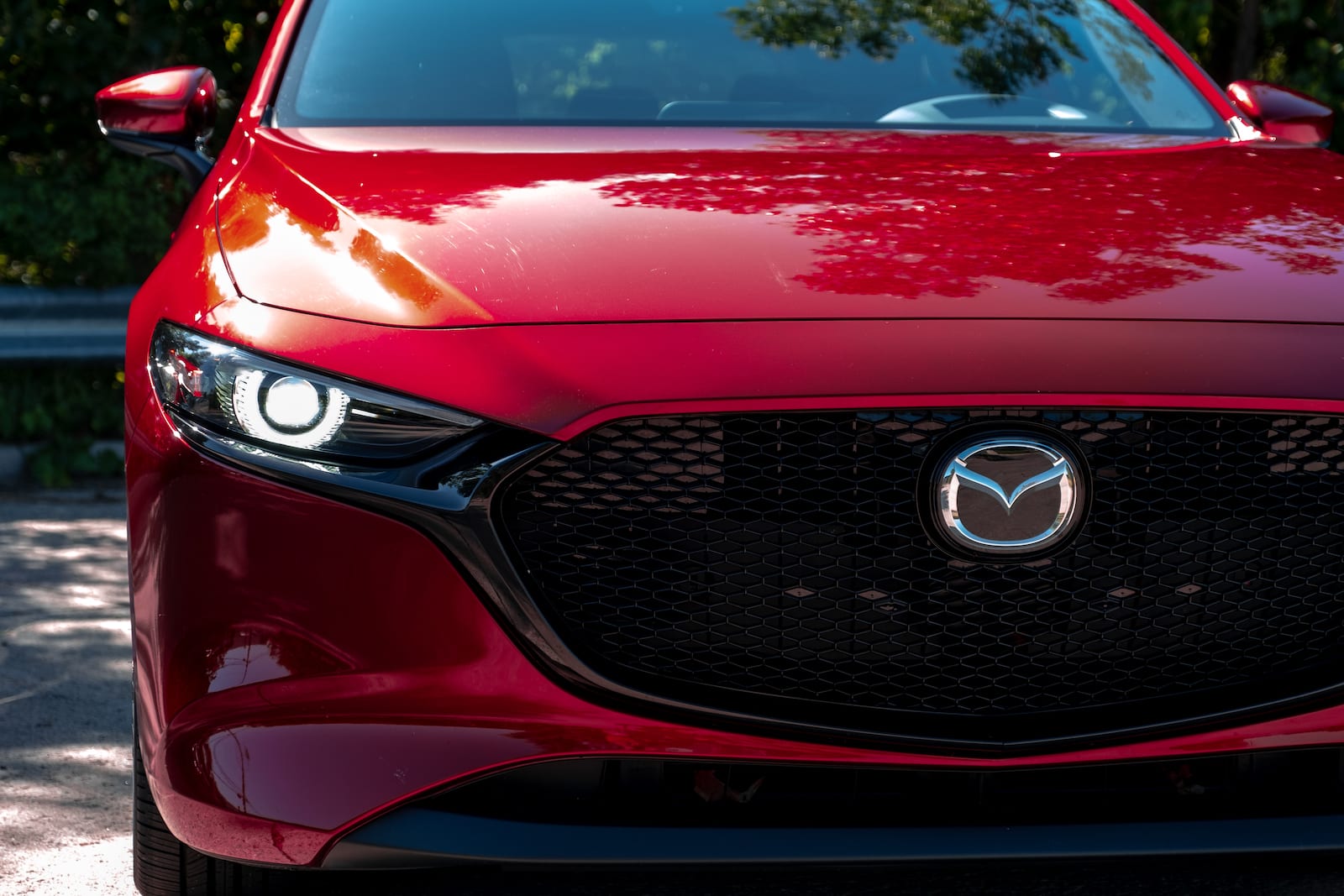 The engine is a 2.5-liter SKYACTIV-G four-cylinder.  It produces 186 horsepower and 186 lb/ft of torque.  The just-announced turbo engine for the Mazda3 will be the better choice.  If you’ve driven the ND Miata, before the new engine, then you know what the Mazda3 feels like.  It was so close, that driving down some roads felt EXACTLY like being in the ND.  Sure FAR more interior room and well a roof, but the sensations and even the view out the window felt the same.

All of that is not all positive.  If you recall the original engine in the ND felt very slow to rev and needed a long, firm boot when matching revs on the downshift.  The new engine fixed that and was really transformational for the ND.  By no means is this a Speed3, it is a better than average “standard” five-door hatchback.  As in Golf to GTI.  Again the newly announced turbo engine going into the Mazda3 should make for a nice upgrade.  Every enthusiast hopes they also turn up the volume for a 220+ horsepower Speed3 version in the very near future as well. 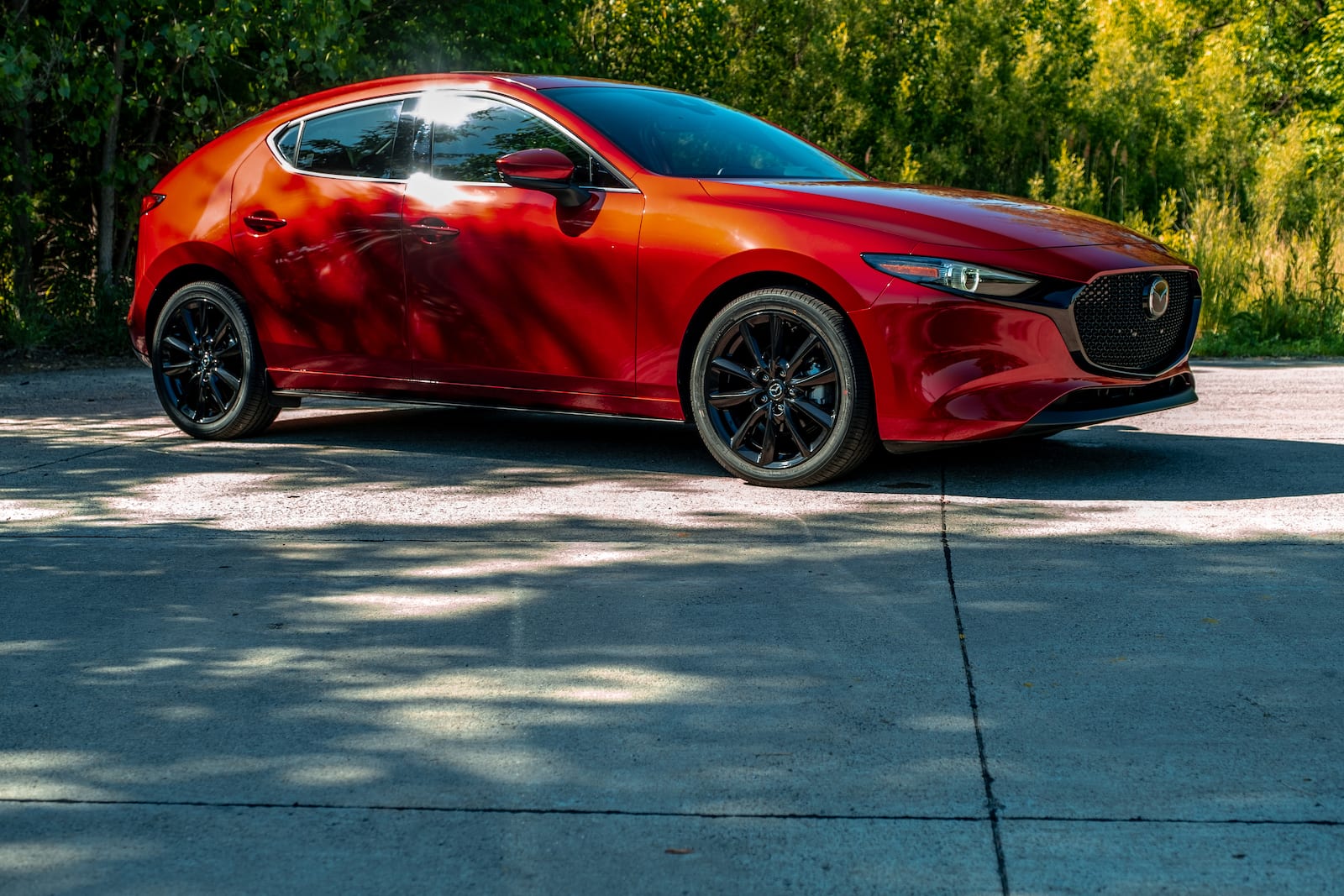 The engine feels very smooth, but there is very little engine noise that makes it into the cabin.  This is odd only in that you do hear more road and tire noise in the cabin that you’d expect.

The ride on Mazda3 is good, right up to the point it’s not.  When you do hit a sharp pothole or other big changes in pavement quality, it goes right through the chassis.  It feels very unrefined at that point.

Fuel economy for the Mazda3 was actually better than EPA estimates.  I saw 31 in the city and 36 on the highway.  EPA says 25 city, 35 highway and 29 combined.

The price for this Premium Package Mazda3 as tested was $30,665.  Given the build quality, the quality of materials inside, the driving dynamics, and the fuel economy, I’d call this very fair value for the money.  However, value is very much in the eye of the beholder.  Let me explain.

There is a private Facebook group of vinyl/audio enthusiasts that I am a member of.  The admin is the owner of Let Their Be Sound in Miami.  He did a demo of one of his setups with Policy of Truth by Depeche Mode.  The phono amp, table, and cartridge were about the same price as the Mazda3.  Many people would consider that an absurd amount of money to spend on an audio system, but if you asked me to choose between that and the Mazda3, I’d take the vinyl setup.

In an era where we need to make Crossovers of all things, the time of the five-door hatchback in the U.S. is fading fast, let alone one with a manual.  If you don’t buy one now if you have the means, do not complain about them not existing in five to seven years.