Three hundred and fifteen feet. Obstructed by buildings, streets, and power lines. That’s incredible. I was totally shocked by this. I have not seen this on any other vehicle. I still can’t believe it. 315 feet, as measured on Google Maps, is a very long distance for a remote engine starter to work. The 2020 Acura MDX uses two-way communication with its keyfob to respond to you. There’s a green light letting you know the engine has started. The only way to improve on this is with wireless data communications (smart phone apps), which often require a subscription.

That remote start isn’t new to the aging MDX. This Acura has only been mildly updated since 2014. What is new to the A-Spec model? The appearance-only package in solely offered on the Super-Handling All-Wheel Drive (SH-AWD) model with Technology Package. Outside, the A-Spec gets half-inch wider 20-inch grey alloy wheels wrapped in Continental CrossContact LX Sport 265/45-series tires. New fascia, body-color sills, large exhaust tips, dark chrome trim for the headlights, grille, window surround and rear tailgate spoiler further distinguish the MDX A-Spec. 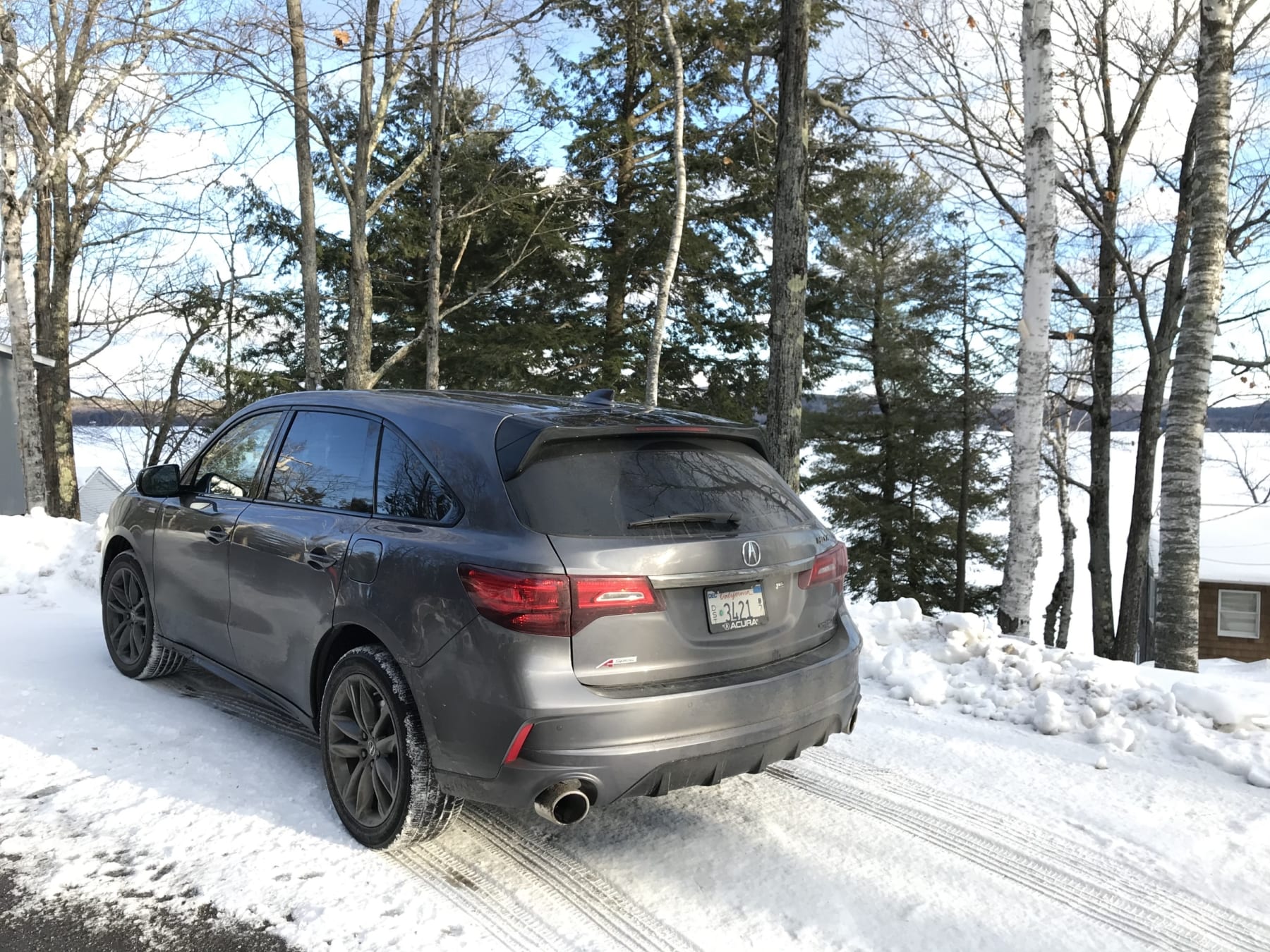 Inside, the seats are trimmed in red leather with black Alcantara inserts, contrast stitching, unique A-Spec gauges, sport pedals, black trim, a thicker-rimmed A-Spec-badged steering wheel with paddle shifters, and doorsills. But while comfortable, the seats lack the sporty support the vehicle aspires to have. Further, the fancy sporty steering wheel is not heated, neither are the rear seats, both of which are a norm in this class.

Otherwise, there is nothing to dislike about the MDX interior. It is comfortable and has all the expected modern features. There are plenty of cubbies, compartments, and holders for personal items. There are six USB ports and two 12v outlets. All materials are nice to touch and of high quality. Acura seems to have worked hard to make the MDX very quiet and it has succeeded. 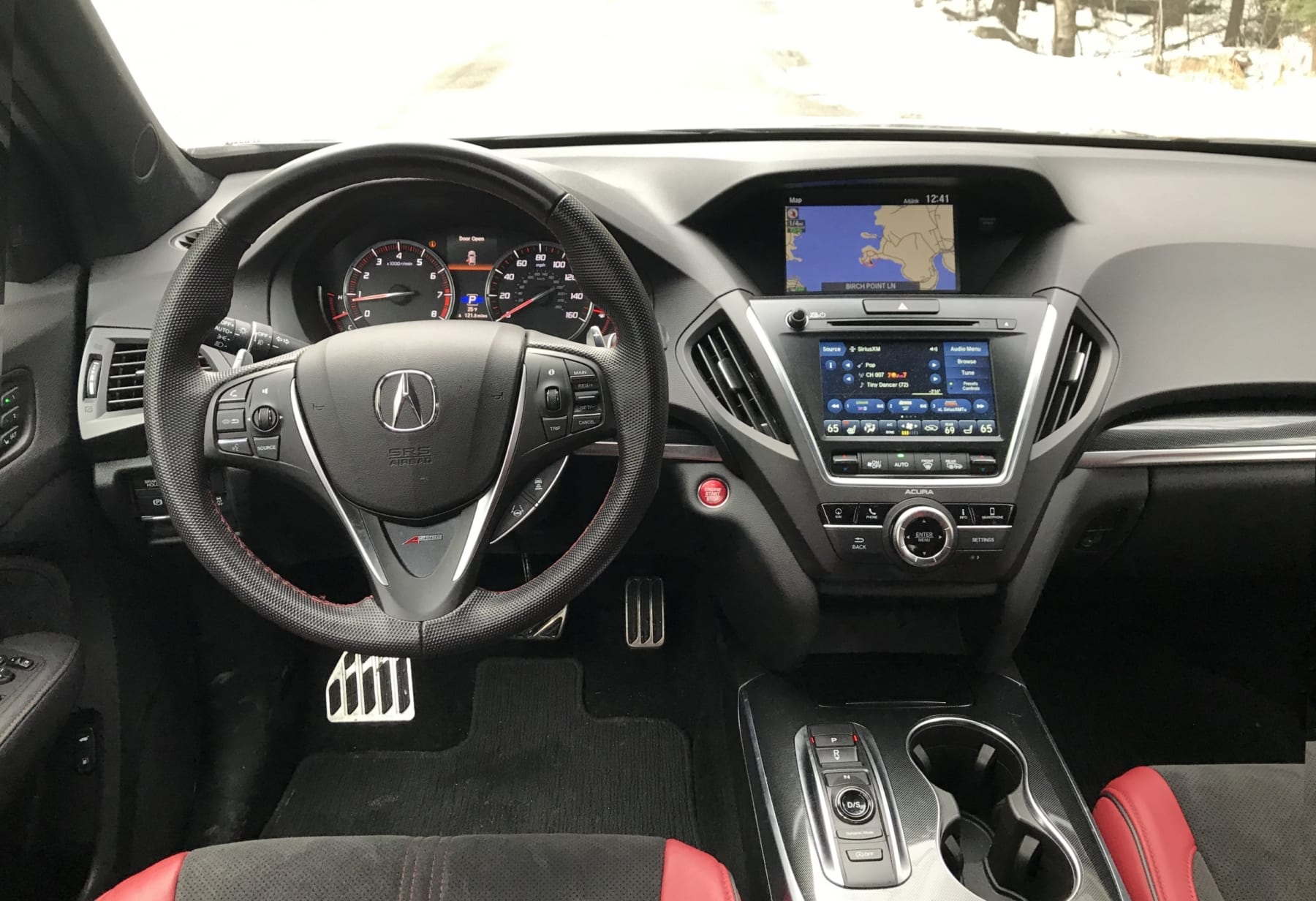 Why two screens though>

If there is one thing that is not great inside, it’s the dual-screen infotainment system, which can best described as frustrating. The top screen displays either a map or apps from a smartphone. The issue there is that unlike your smartphone, the top screen is not a touch screen and has to be operated via the big knob in the middle. The lower screen is a touchscreen but its soft keys are small, displays are sometimes incomplete, and I had a hard time setting my satellite radio pre-sets.

Honda’s venerable J35 3.5-liter V6 makes 290 horsepower and 267 lb.-ft. of torque. In the days of downsized and turbocharged engines that seem to struggle between lethargic economy and peak power, this is very welcome. The engine is quiet and its power delivery is smooth and linear at any speed and in any gear. Even the engine start/stop is so unobtrusive and transparent in operation. In fact, the engine is good that Acura uses it as basis for their IMSA Prototype race cars. 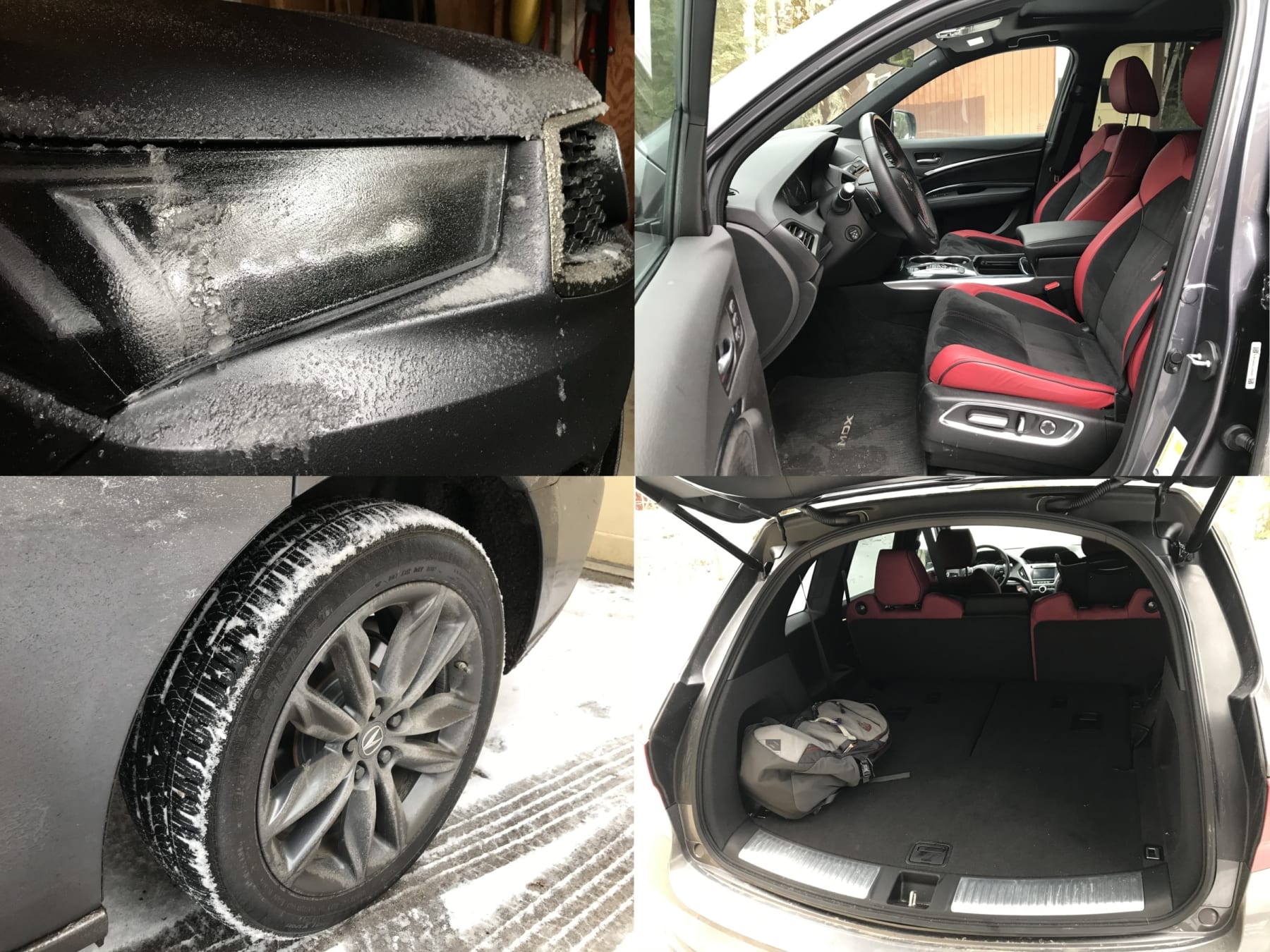 There are nine gears in the automatic transmission. Shifts are equally smooth and uneventful but the gear selector is a series of various switches instead of a shifter. Acura puts that selector in most of their vehicles, including the NSX, and all are equally frustrating. A safety feature automatically puts the vehicle in park, which is good as I have failed to properly press the P button a few times. Likewise, it will automatically select P when the engine is turned off.

How about them beams?

The LED headlights on the MDX deserve special praise. The light is bright but not blinding, with a very sharp cut-off and wide pattern. Automatic high-beams work rather well, turning themselves on and off at just the right times and places. These are some of the best headlights on the market. I do believe though, that interior mood lighting would spruce up the interior to match the excellent exterior lighting. 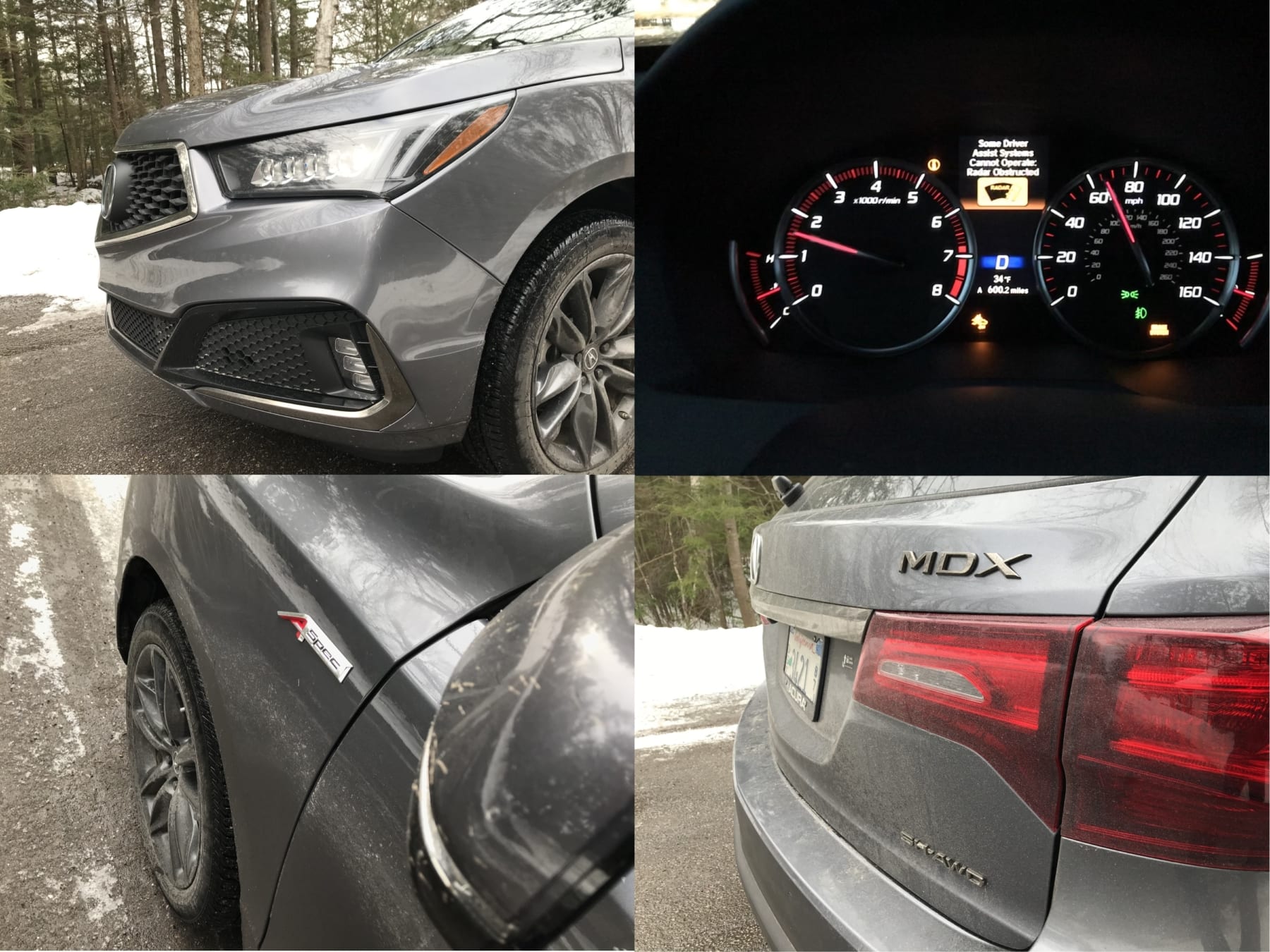 I had a chance to experience the MDX in a snow storm. Even on its all-season tires, the SH-AWD system didn’t spin a tire going up a freshly snow-covered hill. In the mountains, the paddle shifters worked really well for down-shifting and engine braking. I noticed that those superior LED lights have frozen over in the storm, which may happen because LEDs don’t put out the heat like halogen bulbs. That heat would clear the ice off the lenses. Still, I can’t say that the light output noticeably decreased because of the ice. The same cannot be said for the sensors for the collision mitigation, emergency braking system, and adaptive cruise control, which have simply frozen over and shut themselves down because they were covered with icy road crap.

The MDX is ridiculously smooth and quiet. It’s easy to drive and park. It offers a lot of what the market demands. The A-Spec looks sporty but I wish there was some substance behind it. In my opinion it is a little too short on usable space for a three-row CUV due to its low roof and the infotainment system can be confusing even to those with engineering degrees. Otherwise, it’s a solid vehicle that will reliably provide years of comfortable use. And that long distance remote engine start… quite impressive. 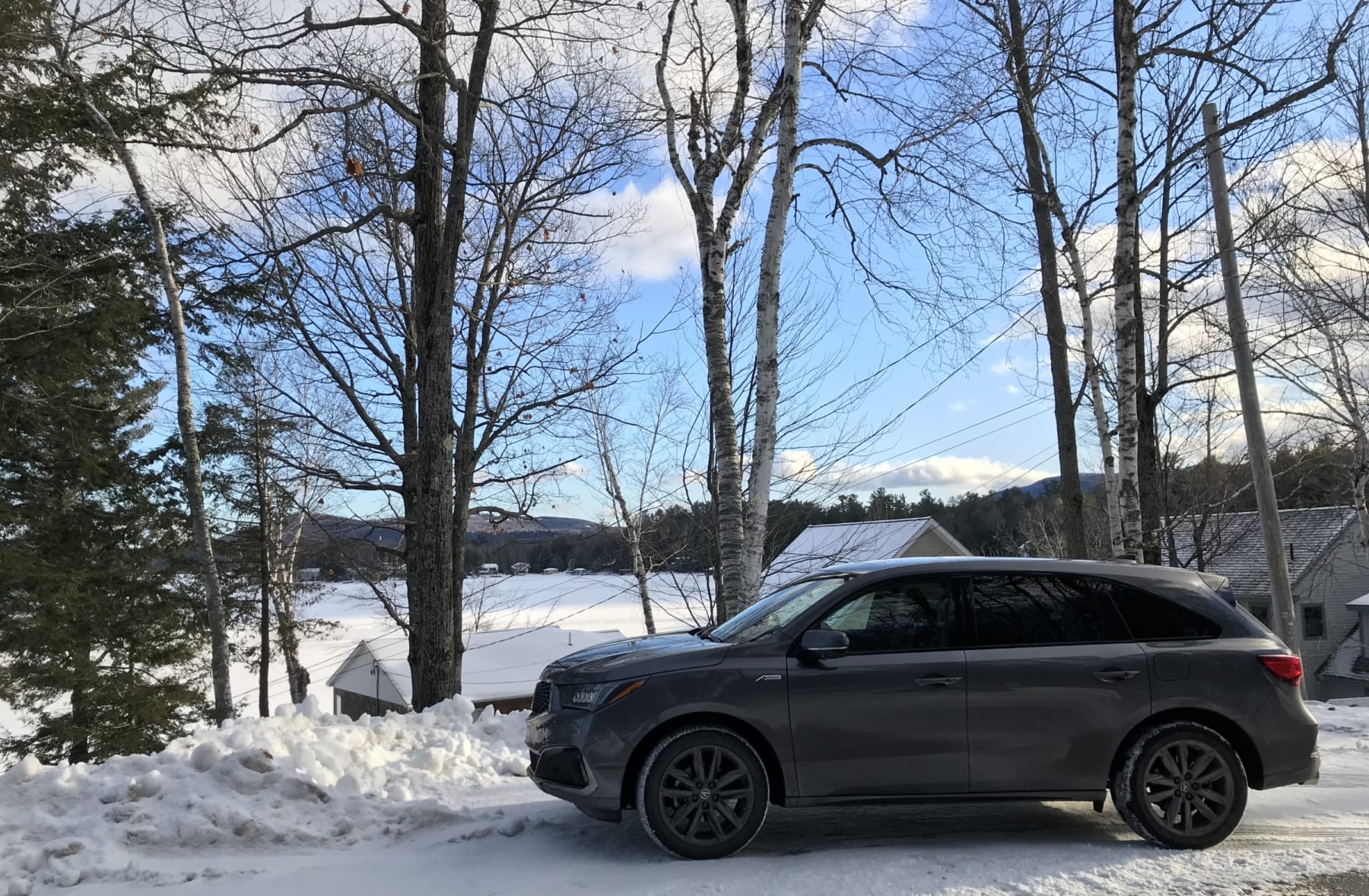 [Disclaimer: Acura provided this MDX for the purpose of this review. All images copyright Kamil Kaluski/Hooniverse 2020]