You can still buy a brand new Plymouth Neon

One of the most common criticisms of modern cars is complication. Today’s crop of automobiles are packed to the brim with computers and electronics. Turbochargers squeeze every last bit of power from tiny engines. As a result, modern cars are a challenge to work on and have a lot more to break.

The trouble is, generally speaking, the only way to get a new car is to get a modern car. If you want a simple back-to-basics machine, you’ll have to scour the used market. And you’ll end up with something used and abused. Until now.

Live for sale on Bring a Trailer is this 2001 Plymouth Neon. Unlike most Neons, it has traveled fewer than 75 million miles. In fact, it hasn’t even crested 75 miles. The digital odometer displays a mere two digits, the first of which is a six. That’s right — there is a virtually brand new Plymouth Neon for sale.

And this isn’t just any Neon. It’s the final Plymouth Neon. In fact, it’s the final Plymouth. This particular Neon is the last Plymouth the American conglomerate ever built. According to the description, the seller — presumably a devout Plymouth enthusiast — custom-ordered the car and drove it home, where it sat for two decades. It’s so pristine the original antenna remains uninstalled. 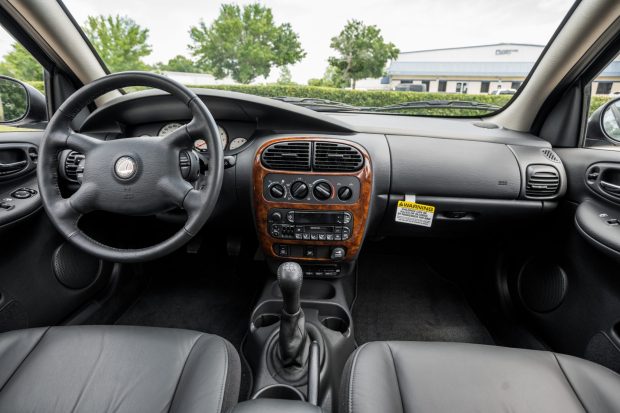 As far as Neons go, it’s quite well-equipped. The interior is finished in leather — uncommon for an economy car, especially back then. A gear lever controls a five-speed manual transmission and sits in front of a wood-look center console. Unsurprisingly, the interior is absolutely pristine, though some rust has eaten away the underbody.

If you’re nostalgic for crappy old econoboxes, now’s your chance, as this is likely the best-preserved Neon in existence by miles. Another massive benefit is the fact that it’s the very last Plymouth ever built. So buy this car, and you’ll have the most interesting form of basic transportation around.