In the blunder years of Youtube I remember seeing endless videos about ‘air-powered’ cars & engines. A lot of them involved perpetual motion, which my young brain attached onto obsessively. The government was hiding these devices. It was all a big cover-up. “Mom! We’re out of tin foil!”

Sooner or later, after watching some of these videos more carefully, I realized that the reality of the situation was much more mundane. The fact of the matter was that you could make an engine run on compressed air. Ah. Of course.

As it turns out, compressed air vehicles don’t make a ton of sense. The energy density of compressed air is piss-poor (worse-than lead-acid batteries). If you attempt to increase this density by vastly increasing the pressure, you get a slightly less piss-poor vehicle that’s also a bomb. Ever seen a tire explode?

Air-powered bikes are a popular project for university students and tinkerers. They’re not quite as time-consuming (and frankly, life consuming) as making their steam-powered alternatives.

There currently aren’t any you can buy commercially, because the range on a relatively low-pressure air powered bicycle is pretty bad. A smart Youtuber named Tom Stanton made one, and his was capable of about 3/8 of a mile.

Now, you may be thinking, what if he (instead of the BORING 120 psi) cranked that contraption up to something like 3000 PSI? Evidently several French people had the same thought you did. 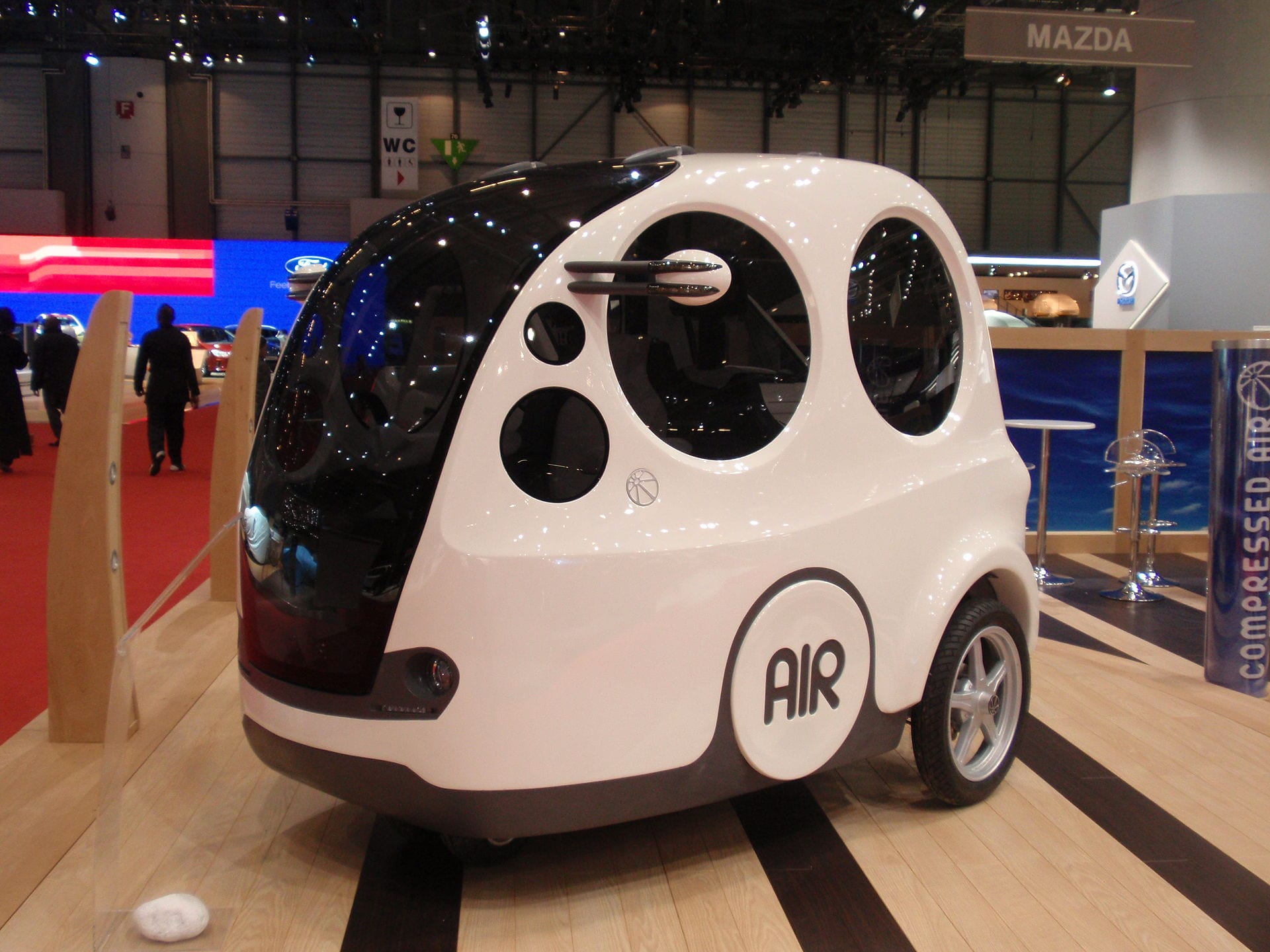 No, not the headphones.

The AIRpod is, well, a concept. The French company who makes them (Motor Development Industries) has been promising a production version for more than two decades. To quote Samir from Office Space, it must be nice to have that kind of job security.

Tata (the Indian automotive company) has a partnership with MDI to make an air powered car, as does a company in the United States. Although things appear to be happening at a snail’s pace, MDI has released a technical document detailing how the whole thing works.

The engine that receives the compressed air is a 430cc two-cylinder. MDI says it’s reversible, meaning it likely works the same way many steam engines do (every stroke is a power stroke). It claims to have variable valve timing, and the whole thing is made from aluminum.  Maximum power is 9.4 horsepower, which, even by 430cc standards, is pretty weak.

It has an automatic transmission, which I’m supposing is of the CVT variety, since no quantity of speeds is listed. This all seems pretty tame so far. The more interesting part is the compressed air storage.

That’s a lot of pressure!

The air is crammed into in two plastic-lined, carbon fiber tanks. They’re 125 liters each, stored under the passenger compartment, and are pressurized to 3600 psi. That’s about 245 atmospheres a piece. The extreme pressure leads to a reasonable range–supposedly around eighty miles–but thats also because of the vehicle’s paltry weight; (allegedly) 617 pounds.

The car is small–the wheelbase is only 58 inches. Its minuscule size and weight are also not the only contributing factors to its range. The AIRpod’s max speed is just fifty miles-per-hour.

This information is explained in much better detail in MDI’s presentation-like document on their website, but all of this engineering doesn’t change the fact that these sort of vehicles are just doomed to fail by their poor energy density.

So why are people trying?

Air-powered vehicles are pretty much the most environmentally friendly type of transportation there is. When it comes down to it, an air powered car has absolutely zero emissions. In addition to this, the materials used to make them can be almost entirely eco-friendly and recyclable. There’s also no messy batteries or tailpipe scum. The factory making them is really the only possible source of pollution.

Another interesting advantage of compressed air cars is the air-conditioning system. Ever bought a cheap, gas-operated airsoft pistol on Amazon, shot your brother with it repeatedly, and then removed the empty canister to feel how chilly it was? You could put a big heat-exchanger onto the air tanks and have free A/C. There’s no hazardous refrigerant or complicated compressors required.

Air tanks also don’t lose any energy density overtime like batteries do. An air-powered car parked overnight without charging wouldn’t lose any range. The same cannot be said for most EVs.

None of that really matters, though.

If you were driving a fully-inflated air-powered car, and got hit by another vehicle, it would kill you. Although I’ve heard being vaporized in an air-powered car is actually very peaceful, I’m not so sure myself.

The lack of efficiency inherent to compressed-air powered vehicles is also more-than often tackled by adding… uhm… a gas engine, or batteries. The hybrid versions of these drivetrains theoretically have the most promise–primarily in buses–but concepts have yet to hit the streets.

They also need compressors to charge them, which are loud. Considering most people charge their cars while sleeping, this may cause problems.

There’s a lot of other disadvantages, too. If you would like to read all of them, the Wikipedia article concerning air-powered cars is very well done.

Stick to the dirty stuff, then.

So, as it turns out, a clean air-powered future doesn’t look so good. That’s too bad, because the rare-earth metals found in EVs are much dirtier than most people realize. A popular method for mining them is to dig a big hole, get all of the valuable metal out, and then pour all of the mining slag back into the hole you dug. If you’re not so keen on doing this, you can just have kids in Africa do it.

The alternatives to gasoline are gradually getting cleaner, but there is yet to be a breakthrough. Hydrogen looks pretty good, but it’s still very expensive. Its a shame compressed air doesn’t work very well, but I suppose we’ll just have to keep waiting.