If you happen to be in the Los Angeles area on Thursday, and don’t want the family fun to end with the pumpkin pie, then round up the young’ins and head over to the Toyota Speedway in Irwindale for the 69th running of the Lucas Oil Turkey Night Grand Prix, which is presented by Agajanian Promotions.
Pre-dating the Irwindale track by five decades, the Turkey NIght races have become a southern California institution. The Toyota Speedway took on the tradition when it opened in 1999 For the longest time it was held at Ascot Raceway in Gardena, and the event bounced around between various tracks after Ascot closed in 1990 before finding a home at Irwindale.
There will be over 200 laps of excitement for your tryptophan-heightened excitement topped by an Agajanian-feting 98-lap USAC midget race, which will provide some of the fastest lap times of any of the speedway’s races. The track opens to the public at 4:00, and the Taco King  fan appreciation autograph session, which will let you rub elbows with the drivers out on the track starts at 5:45 p.m.. Racing gets underway at 7:00. And remember, the fun doesn’t stop when the yellow flag drops, and that’s because Lugnut, the Irwindale mascot is there with his tee shirt cannon to keep the spectators cheering.
The Toyota Speedway is where the 605 Freeway and Live Oak Avenue COLLIDE! Discount tickets are available. 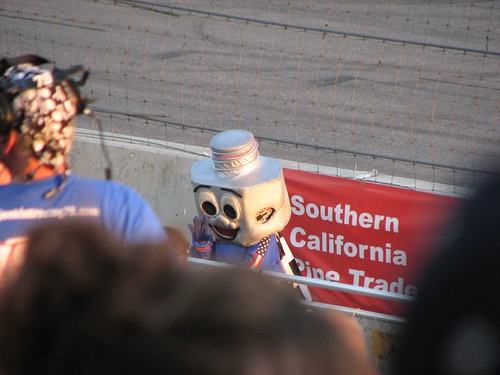