Train of thought: Why Motorail is due a revival

I quite like cars. Also, despite them being inextricably linked with my daily five-hour round trip to work and back, I quite like trains. The two have never really been happy bedfellows, though. It’s always been trains versus cars, the latter very much gaining the upper hand since the middle of the 20th century, at least in Britain. Right now, though, I see an opportunity for a bit of role-reversal. There’s now a legitimate opportunity for the car and the train to work together in harmony. But is there any spark of plausibility in the naive stream-of-conscious rambling that chunders on below?

There once was a chap called Beeching, a man whose ruthless pruning of British railway routes in the 60s meant that many of those rural dwellers who had once used rail were forced to turn to the car. Billions of pounds were saved by the closure of ‘inefficient’ routes, the network being ‘streamlined’ to link only the major centres of population and those smaller towns that were lucky enough to be en-route between them.

It was a bit chicken and egg, really; at the time, rural railways had begun to lose patrons to the car, which, by the 1950s, really was something that every family could afford to own and run. When Beeching tersely dictated along the lines of “you’re not using it, so we shall take it away”, many of the branch-line and rural railway’s remaining supporters were forced onto the road. The rest, as they say, is history.

Venture broadly onto The Internet and you’ll quickly build a picture of Britain’s current rail network; inter-urban routes are crammed to bursting at peak commuter hours, and if these people were suddenly forced onto the road instead, South East England would come to a shuddering halt. Our meandering, indirect roads simply wouldn’t be able to cope. That’s pretty much the main passenger purpose of railways these days; pumping vast quantities of urban workers along the arteries between the country’s main commercial organs. And, although, a typical commuter (myself included) is never very far from emitting a loud, embittered whinge, the system works pretty well for that kind of thing.

Where it isn’t so hot, though, is for making the kind of journeys that you actually want, rather than need, to make. The daily work routine is one thing, but a holiday by rail is, for many, basically impossible. We’d far rather cram our cars with family and freight and hit the road. Personally, it’s hard to imagine involving a train in my annual Cornish camping trip – hauling a load of camping gear on a series of trains to get from East to West would be bad enough; not having a car to use when I got there kills the idea stone dead.

Once upon a time, though, Britain had a service called Motorail. This was the brand that British Rail (a nationalised entity that really ceased to exist after profit-led privatisation in the ‘90s) applied to its car-train services, which once offered motorists an entirely hands-free method of journeying the length and breadth of Britain.

Other countries still offer such a service. In Slovenia, you can sling your car onto the train at Bohinjska Bistrica in order to run through the 4-mile Bohinj Tunnel, emerging at Most na Soči having avoided a big chunk of the Julian alps that there’s no easy road route to cross. It’s not exactly a heavily subscribed service, but is one that seems to have been kept running out of principal and national vanity (Slovenia’s rail service is still state-run).

In the UK, though, Motorail fizzled out during the 80s and, save for a spell of perseverance in the early 2000s, was gone entirely over a decade ago. That’s because, when it’s running freely, Britain’s sprawling motorway network – which allows you to drive past hundreds of interesting places at high speed, without experiencing any of them – cuts car journey times to such an extent that putting the car on a train was no longer worthwhile.

All of a sudden, though, there’s reason for Motorail to be not only worthwhile, but necessary and glaringly obvious: the limited battery range of electric cars.

The two loudest moans you hear on the subject of EVs are cost and range. The two are linked; when choosing an electric car you can pretty much have one that’s affordable or goes a decent distance between charges. What’s regarded as a ‘decent distance’ seems to hover around 200 miles or so in the minds of many; it’s a figure that represents some kind of psychological barrier between being sufficiently mobile and feeling trapped within a constricting radius of home.

I’m as guilty of this as the next person. I love that I can ‘charge’ my cars to a 400+ mile range almost instantly at one of my local gas filling stations. I can make it from home in Essex to deepest Scotland in less than a day, stopping occasionally to fill my ‘battery’ with fossil fuel. Even in a Tesla with the longest range, such a journey would take some advance planning; I’d be at the mercy of the charging network, and there being an electricity nozzle handy when I need it.

It also seems rather a waste to use all that electricity up on the motorway, where constant high-speed running saps a EV’s batteries rather more quickly than urban trundling does. What if there was a way of obviating the need to use the road at all, until you get closer to where you want to be? 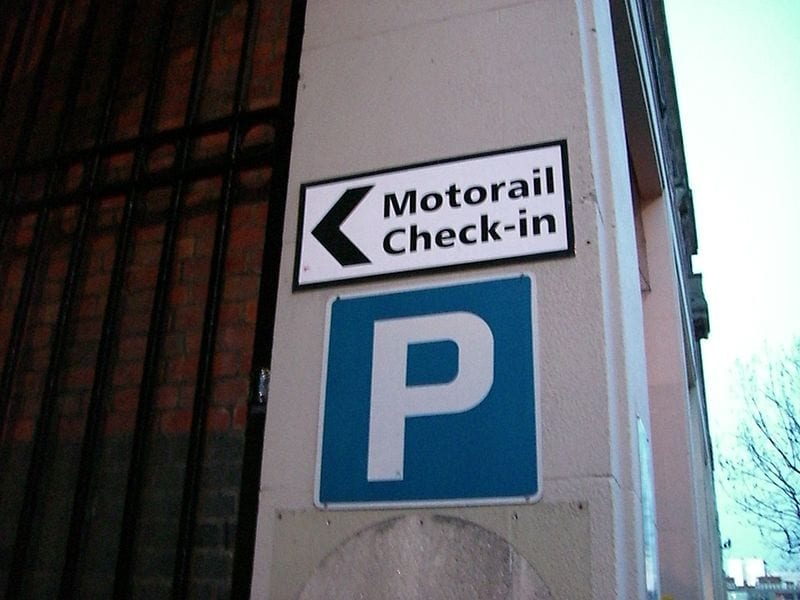 What if you could put your Tesla on some kind of train? Imagine that you could drive to a station just outside your own town, park your car, sit down in a comfy chair with access to entertainment, food, drink and sleep, and then wake up 300 miles closer to your destination having used none of your battery range in the process?

The potential for increasing the usefulness of the electric car makes a renewed Motorail system more relevant and worthwhile today than it has ever been before, and the country already has much of the required infrastructure in place to entertain the notion. In fact, if the Government has its way, the country will soon be criss-crossed with new high-speed lines that’ll cover many of the inter-city journeys that would prove a struggle for an EV to handle. Of course, I’d suggest against trying to accommodate a Motorail service during peak commuter times – let’s face it, nobody sane would choose that time of day to make a long motorway trip anyway. But at less congested times, a string of Motorail carriages could easily be hitched to the back of a regularly timetabled train; if only an hourly service, or even twice-daily, that’ll account for a big chunk of those who want to make that kind of journey in an electric car.

There is, of course, an enormous beast of a fly in the ointment; my local rail franchise charge a commuter £67 for a return trip from rural Essex to the other side of London, and rail fares are pretty criminal elsewhere in the country, too. And that’s before you start considering taking your car as well. I shudder to imagine the likely Motorail ticket price if left in the hands of today’s train operating companies. But that’s because rail services in the UK today are all about delivering profit, rather than keeping the country moving. Unlike the olden days, when rail was a method of transporting the masses to work and keeping the economy in rude health, these days transport to work is an expensive privilege rather than an affordable right. But let’s gloss over the minutiae of economic plausibility and go back to the fantasy. 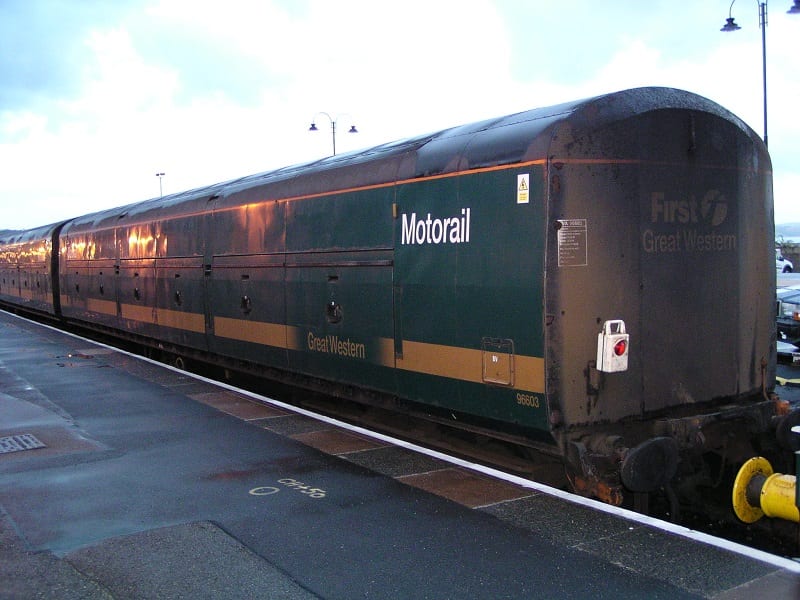 Putting feasibility firmly to one side and pushing ahead with the idealist notion of a re-nationalised rail system, what might this new Motorail fantasy achieve in the long run? Well, if the integration of car and train can be executed slickly enough, electric car range anxiety could cease to be quite the obstacle it is now. For a vacationing family to arrive close to their destination with a fully-charged car would put them at leisure to properly explore the sights when they get there. Far-flung counties and regions, such as Cornwall and North Wales, seem perfect for zero-emissions electric exploration – it’s just the difficulty of reaching them in the first place that excludes EV drivers from venturing there. But if such a foray is only made annually, and putting the car on a train is painless and inexpensive, it suddenly becomes a far more attractive proposition.

That could even take it to the point where nobody really needs an electric car with more than 200 miles of range. For most people, that kind of daily travelling limit is more than sufficient, particularly as it can be restored by plugging in overnight. If nobody needs a longer range, battery tech development can reprioritise away from expanding outright capacity and instead concentrate on longevity and charging speed. And, very possibly, the price of batteries will come down, making electric cars more affordable overall.

It could rekindle our love affair with rail, the flames of which died down at the end of the days of steam and have been barely flickering since them. If never making trains the centre of our lives again, it could at least fan the embers enough for an occasional toasted marshmallow.

Better still, it could give EVs a better-defined purpose in life – for making the short-haul journeys that so often provide our most vivid experiences and forge our strongest memories. Thorough the rose-tinted glass of nostalgia, we look back fondly at the tedious hours of travelling to get to the theme park, the seaside or the family outpost, but they were journeys we hated making at the time. By letting the train take the strain over those interminable miles, it’s doubtful that the richness of experience would be very much diluted. Quite the opposite, perhaps.

Outside those peak commuter times when flesh and blood is crammed into a wheeled metal tube to such a density that the product resembles a kind of human paste, inter-city trains are actually quite pleasant to travel on, and you can use the toilet, buy a snack or read a book far more safely and conveniently than you can while driving a car. It must be quite thrilling to settle down in a comfy seat, watching the beautiful scenery, foul weather and queuing traffic pass by, smug in the knowledge that your car is coming along for the ride.