The whole world right now is losing its mind over Electric Vehicles – EVs, as the abbreviators call them. Keyboard experts go on and on about range and recharge time at various voltages, battery capacity, system efficiency, and a whole of other stuff that no one was really teaching in Electrical Engineering classes two decades ago. It’s an interesting time to be alive. Now, if they could just start talking about the charging/electrical global infrastructure, things could actually progress.

Meanwhile, the company that principally brought the whole idea of electrified vehicles to market is not saying much about EVs. Toyota seems to be quietly engineering quality vehicles and selling them by the  hundreds of thousands. Thousands, as in almost 50,000 RAV4s sold just in the month of August, just in the U.S. To put it into perspective, that’s more RAV4s sold last month than all vehicles for Mazda and Audi combined for the same time period.

The new RAV4, like the many of Toyota’s current products, are based on one of the versions of the TNGA (Toyota New Global Architecture) platforms. From personal perspective, each of the TNGA-based vehicles I drove seemed superior to the older models. The new Lexus UX 250h, based on the GA-C platform, that I am currently driving maybe the best non-performance hybrid I ever drove – more on that later. GA-K is a basis for the Camry, Avalon, RAV4, Highlander, and the like.

Now, Toyota introduced a new small car GA-B platform. It is a replacement for the B platform which was the basis for vehicles such as Yaris and Prius C. Toyota has shown several pictures of the platform. Aside from its scalability and suspension setup, nothing was mentioned regarding any kind of powertrains. But the pictures speak louder than than the press release text. A closer look at the above picture shows a box behind the front seat, possibly under the rear seat. Let’s take a closer look: 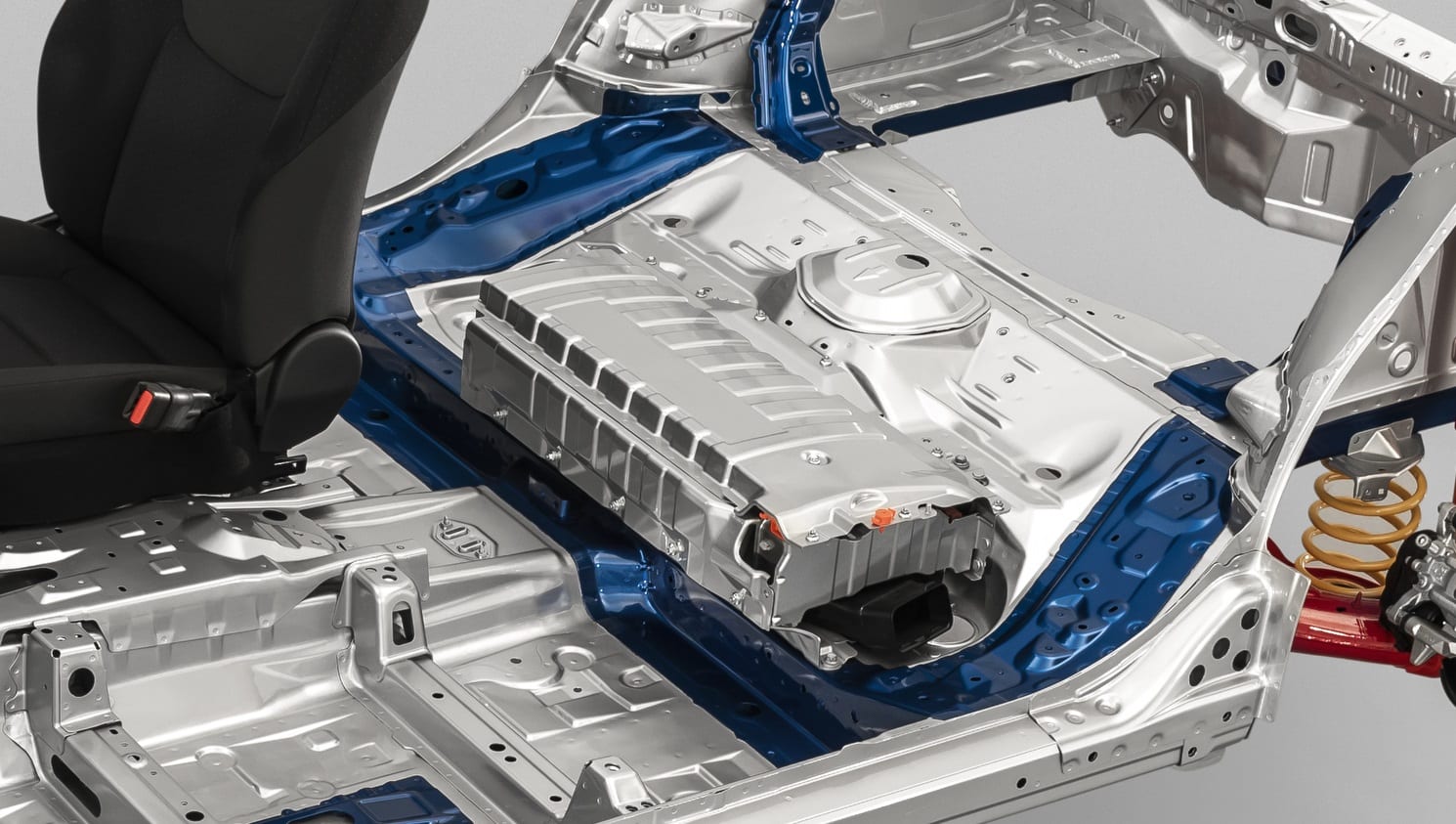 That, right there, is clearly a battery pack. It even has a cooling duct going under it. That blue area around it, and the blue areas visible in other pictures, those are the chassis hard points. Those are non-scaleable, non-adjustable, no-changeable chassis hard points. And this battery is surrounded by it.

But a battery this size, roughly no more than 24-inches wide, 16-inches deep, and 5-inches tall cannot possibly hold enough energy to work a purely electric vehicle. It has to be a hybrid battery. Not only that, most of the other fixed area is in the front of the vehicle, where typically a conventional engine would be mounted. This means that it is designed for a conventional engine and nothing else. Further, just behind that battery is typical fuel pump cover that goes the fuel tank.

This configuration leads to believe that probably all of Toyota’s new small vehicles will have some kind of a hybrid powertrain. This design is pretty much forcing that. The space between the rear wheels, call it spare tire wheel well or the area under the trunk, clearly shown as open in this image, could hold an additional battery, such as that of a plug-in hybrid version. The narrow long blue area running the length the chassis is likely where the high voltage cables will go.

Providing a strictly hybrid small vehicles is a brilliant idea at this time. While all the automakers are competing for EV fame, the fact is that the world simply is not ready for hundreds of thousands new electric vehicles. There is not enough charging areas around, really anywhere in the world, and home charging is mostly limited to those with personal garages, which pretty much excludes most of Europe. Then there is the question if our electrical infrastructure, the electrical grid, can actually support 200,000 to 400,000 brand new additional vehicles being plugged into it annually.

The hybrid, be it plug-in or conventional, is therefore a great compromise. It appeases those screaming about pollution while still using the existing gasoline/oil infrastructure, which makes living with an economical, easier. It’s a win-win. The EVs are coming, we’re just not ready for them. Enjoy your hybrid.