I was half-way into my week with the 2020 Toyota Land Cruiser Heritage Edition and my feelings toward it were very conflicted. Its go-anywhere, fear-nothing feel was charming me. Its dated elements were doing the opposite. How would I feel about the package as a whole?

The week progressed and I continued to drive the Land Cruiser to-and-from work. Driving the awful roads of my home city made the Land Cruiser feel laughably underutilized. But it didn’t care. And that’s the key: It doesn’t care. Potholes, undulations, broken and missing sections of the road; even the worst of them barely make it to the seat. Big tires with sizable sidewalls plus a suspension designed to soak up trail obstacles translate to a ride quality that is shockingly good for the vehicle’s off-road capabilities. Which, I’m told, are spectacular. 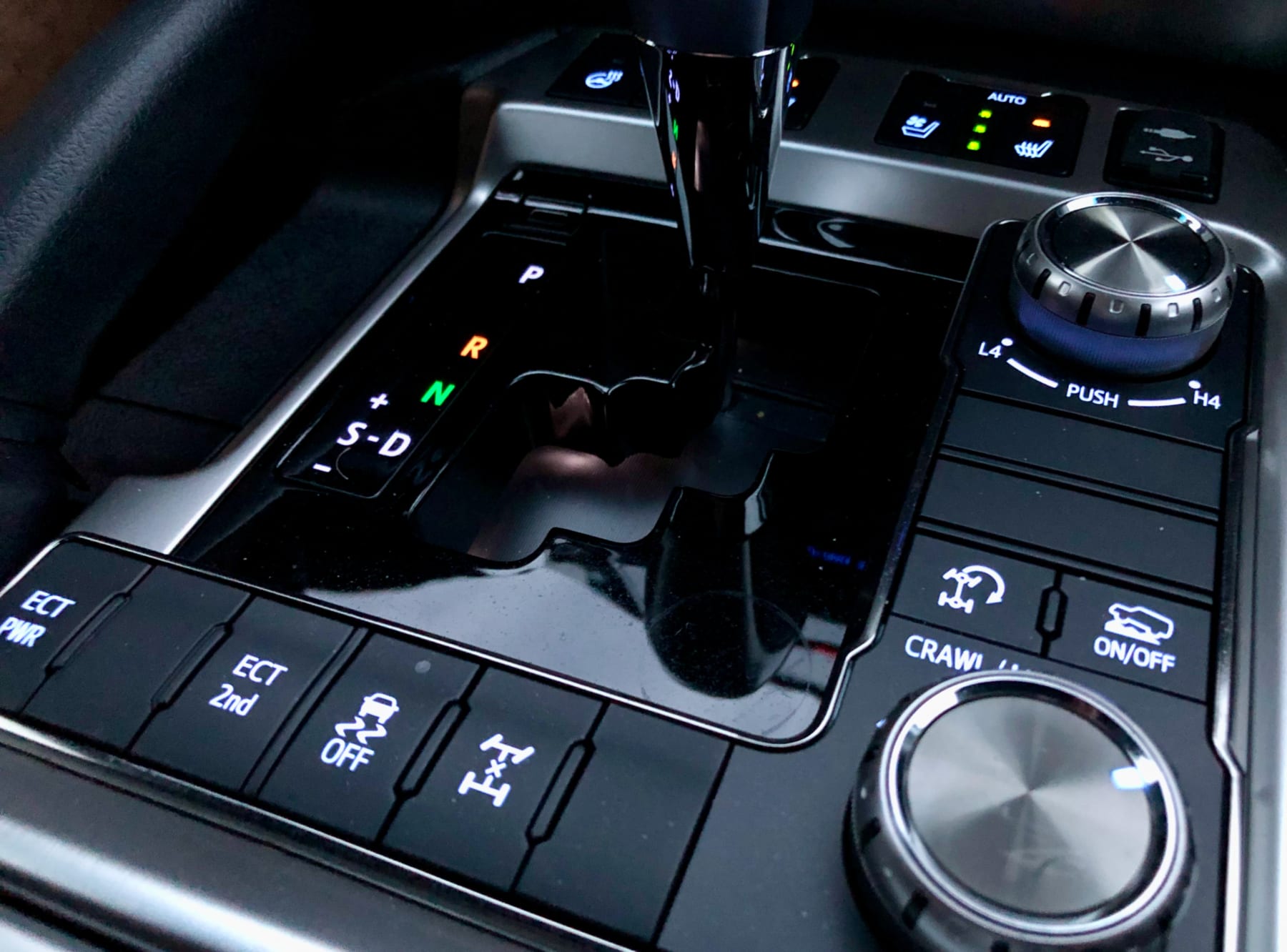 No trails, no fun

Unfortunately, as Chris Tracy, Robby DeGraff, and I discussed a recent episode of the Off the Road Again podcast, nothing I could do with the Land Cruiser Heritage Edition would come anywhere near close to its limits. Private off-road parks remained closed through the end of my press loan and I’m not into illegal wheeling. So while I couldn’t test the Land Cruiser Heritage Edition’s 4WD system or even see how it fares on an easy-level trail, I could muse over the equipment, the price, and if one plus one equals $90K. 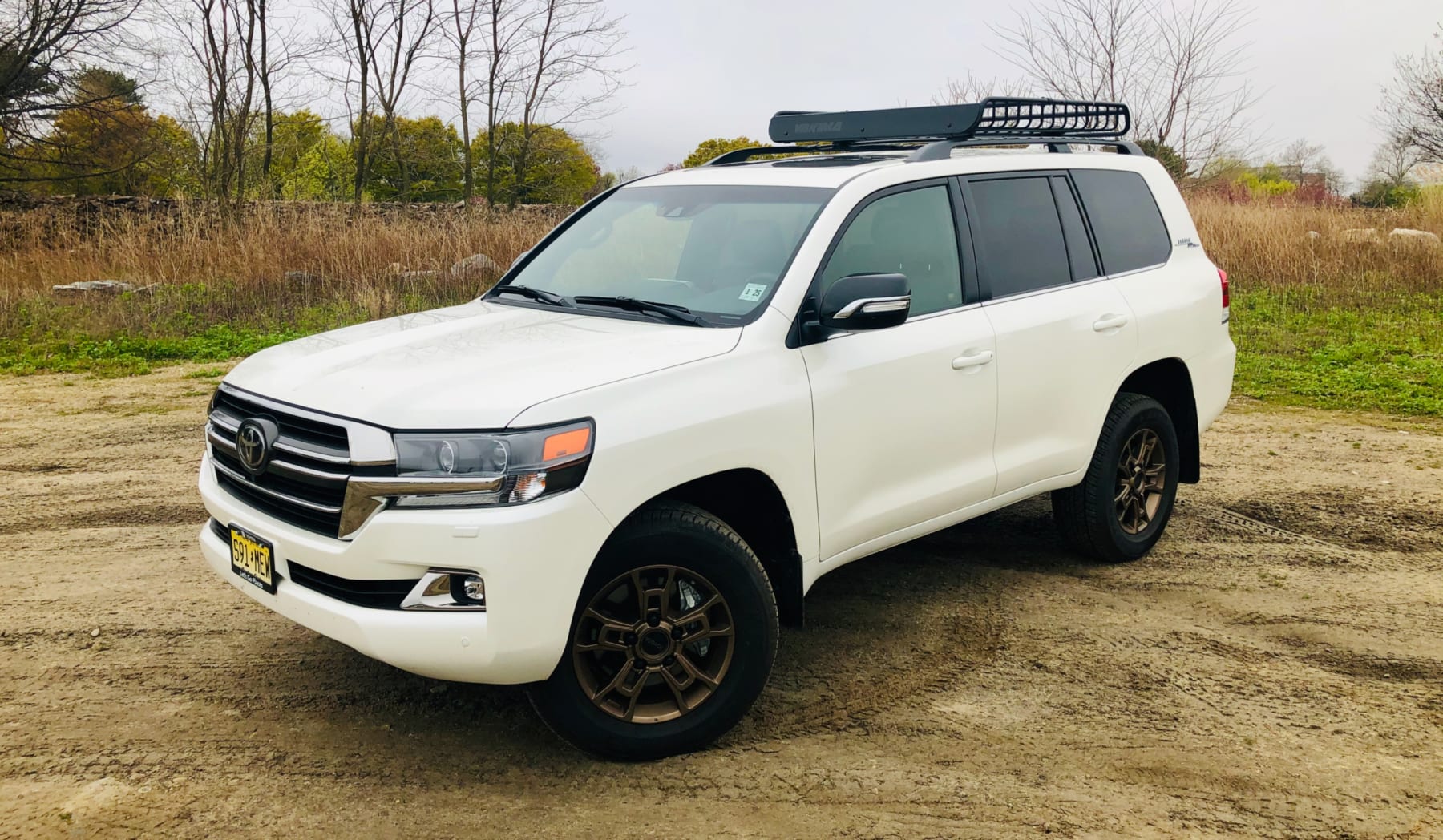 Worth its weight in gold, er, USD?

On the outside, it’s hard to say if the Land Cruiser Heritage Edition’s looks reflect its worth in dollars. It’s not much dimensionally bigger than the 4Runner but its presence is much different. Some elements are great: The hood’s huge valley adds visual drama and the split tailgate is amazingly useful. Yet the whole shape is slightly bulbous to my eyes. It’s not a bad design but the 80 and 100-Series LCs wore it better and looked less like they were bursting at the seams.

Thankfully it makes for a massive amount of usable space. You could live out of the Land Cruiser for weeks without needing more room. Also of a pleasant surprise is the low window line and thus a big greenhouse. Whereas so many modern cars have ever-rising beltlines to chase a concept-car aura, the Land Cruiser’s windows are refreshingly big and the sill sits closer to your hip than your shoulder. In turn, visibility is brilliant. 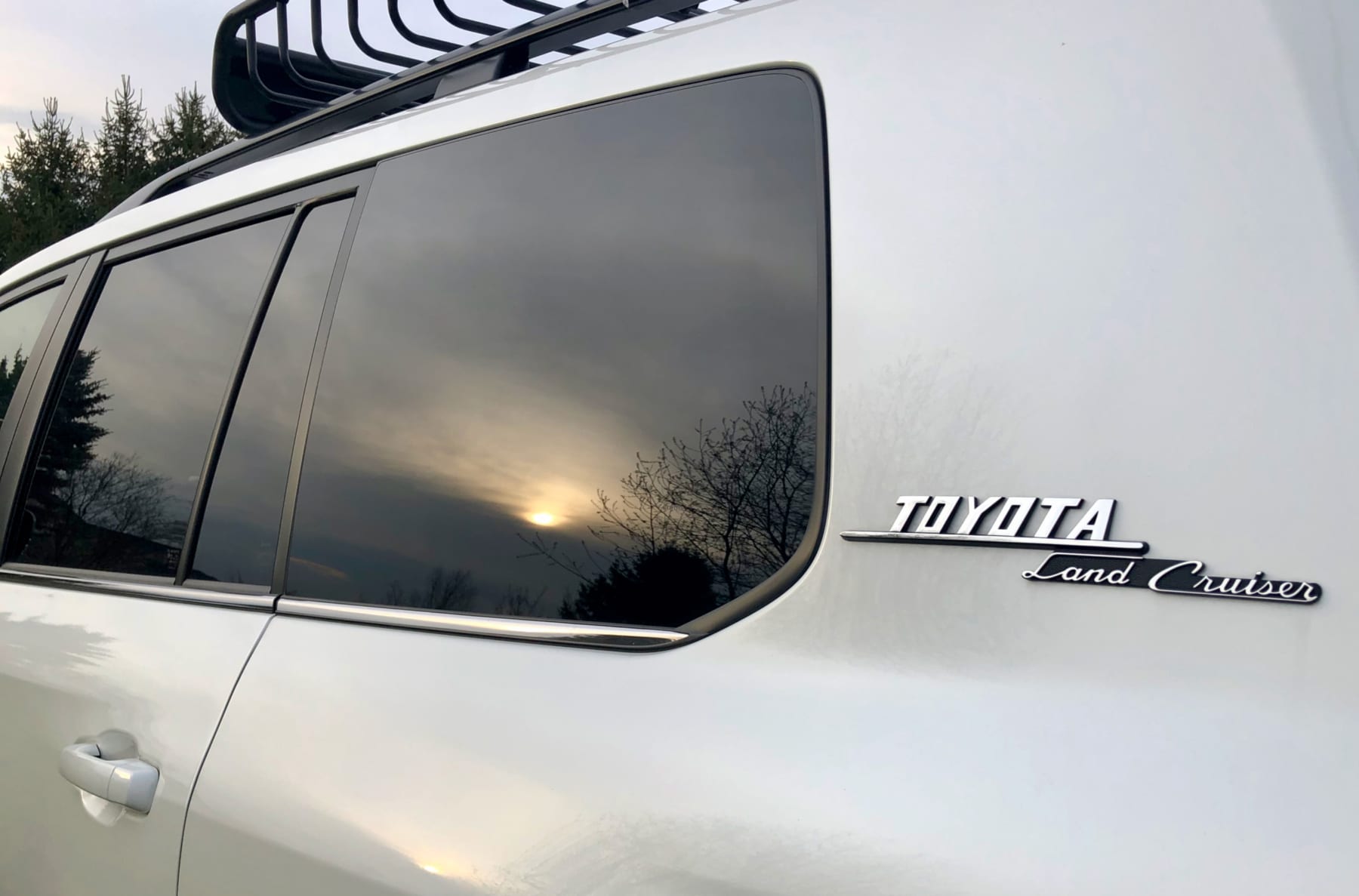 As are the Heritage emblems. They’re a tasteful accouterment, garnering compliments galore. What’s missing is rocker panel protection. As-is, they’re decidedly unfinished. That’s doubly so considering this is supposed to be an off-road-focused variant and off-roaders know the rockers are among the first items to get damaged on even a semi-difficult trail. Rock sliders are a mandatory upgrade for serious wheeling.

Climbing inside the Land Cruiser Heritage Edition reveals a mixed bag. A commanding seating position gives way to Lexus-like gauges and abundant space. Best of all is the build quality which is among the best I’ve seen in any vehicle at any price. How well Toyota screws the Land Cruiser together shows how much they care about it. Zero gaps, zero squeaks, zero rattles. It’s a demonstration in assembly and attention-to-detail. Other manufacturers should take notice. 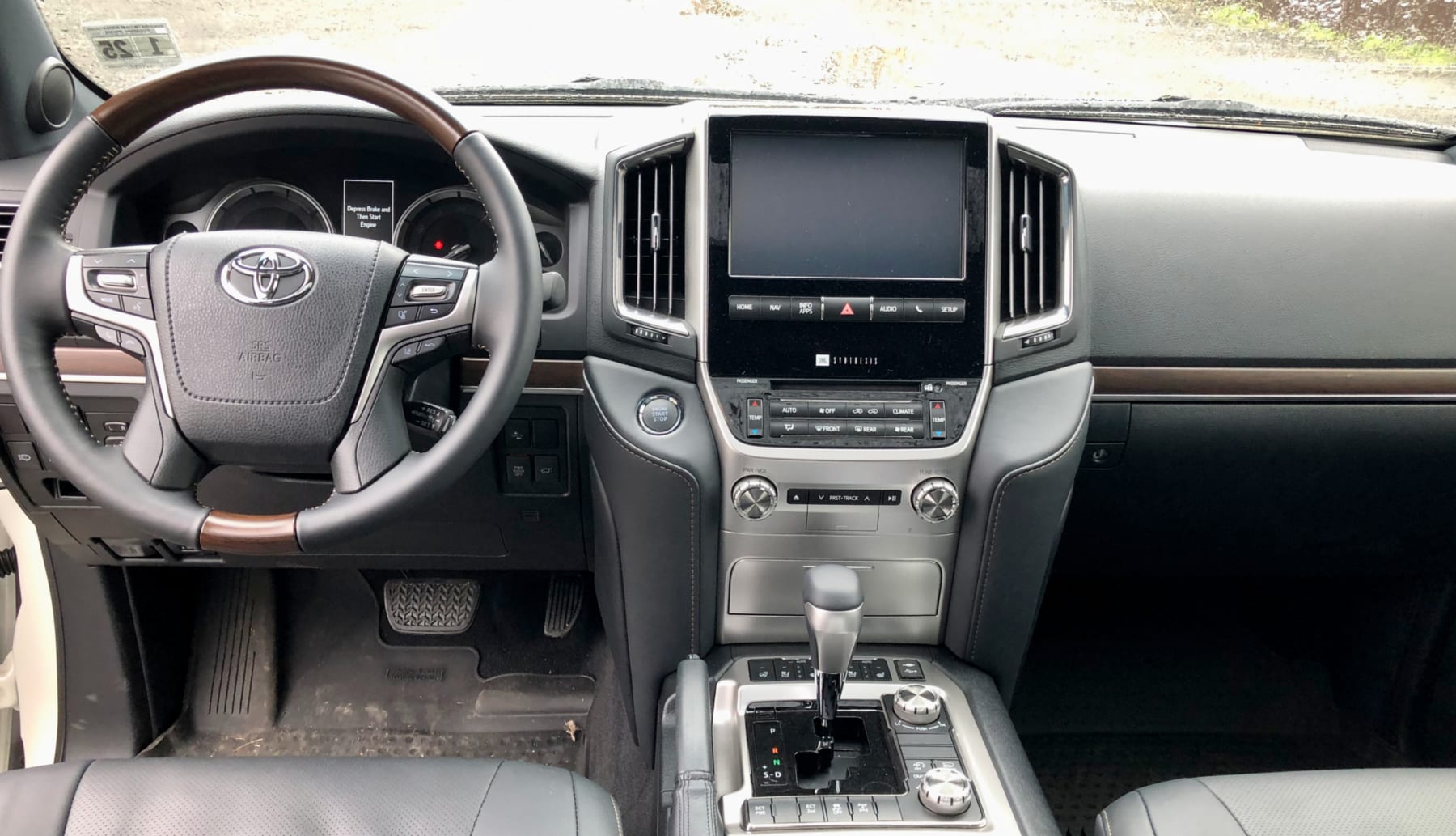 Here the Land Cruiser Heritage Edition it reveals some aging roots. The seats are comfortable but not spectacularly so and offer nowhere near enough adjustment for this price point. And while the center screen is of sufficient size and functionality, the resolution is disappointing for, again, a vehicle at this price point. Ergonomic oddities do exist, like the camera toggle button being hidden well behind the steering wheel.

It also has to be said that some of the switchgear is identical to that which was in my 2018 4Runner, a vehicle carrying an MSRP only 47% of the Land Cruiser Heritage Edition. Are the materials worth the price tag? No. The build quality, however, certainly is. It almost makes up for the lack of features present on some vehicles one-third the Land Cruiser Heritage Edition’s price. 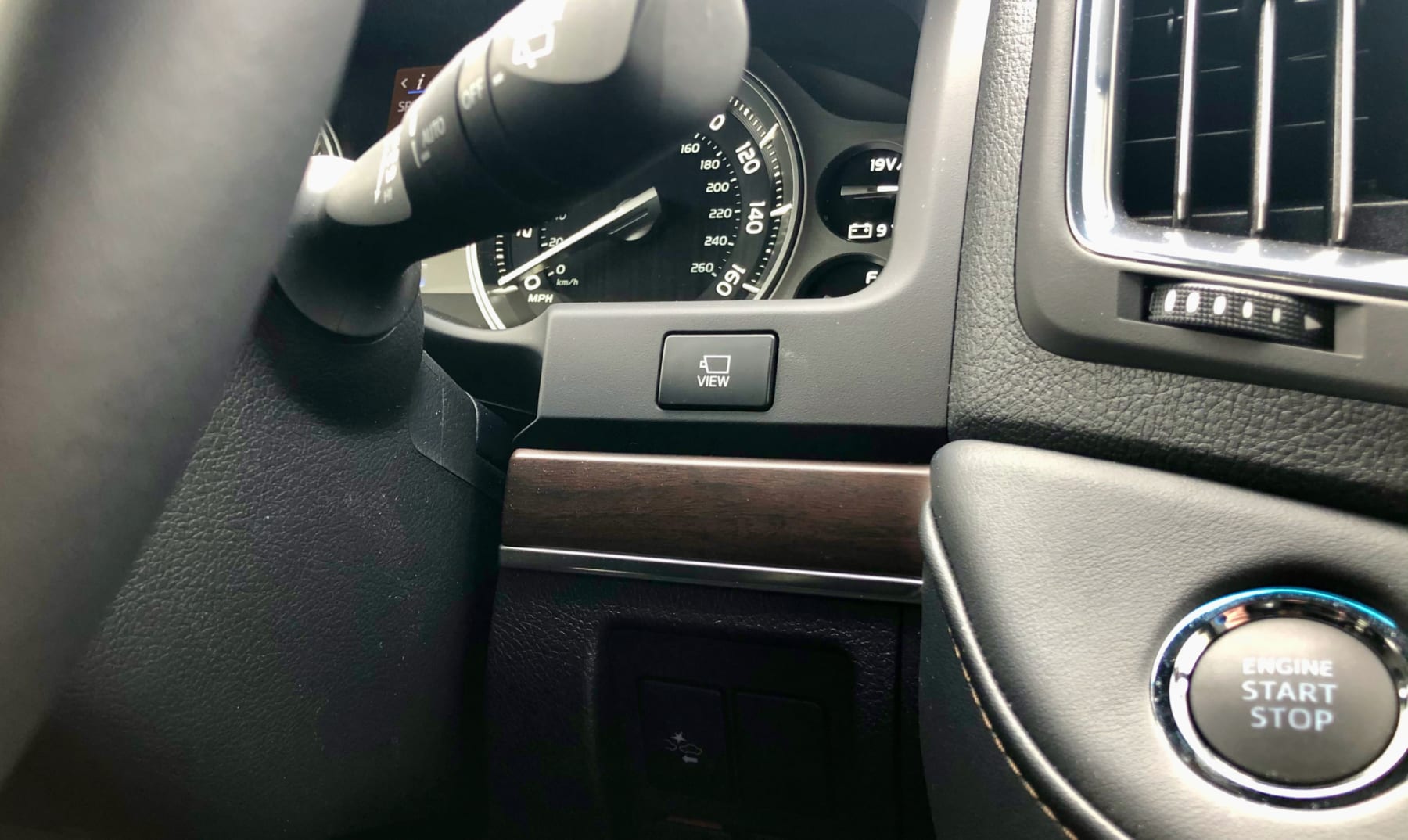 Mechanically, the Land Cruiser Heritage Edition is stout. With a center locking differential and low range, the 4WD system is that of a true, honest four-by-four, and it could likely go anywhere the normal person would point it. But the normal car enthusiast would also likely notice that its nearly 5800-pound curb weight means it’s painfully slow. The 5.7L V8 gets the Land Cruiser out of its own way, but it can’t mask the mass. Big engine and big weight also translate to the worst MPG of any vehicle I’ve tested. (The roof rack doesn’t help.)

On a recent episode of the OTRA podcast, Chris and I discussed Zach Bowman’s article about the perfect apocalypse vehicle. Here, the Land Cruiser Heritage Edition’s MPG plays a huge detriment. Other mechanical items of note are that the transmission gets confused and stumbles over itself occasionally when coming to a stop. Worse, the brake dive rivals that of what I experienced in my 5th-gen 4Runner. If only this engine was in that 4Runner, though; what a glorious package that would be.

But why dwell on what are relatively insignificant items? Land Cruiser buyers won’t care about any of them. What helps justify that $90k-sticker is the fact that the truck feels like it can go anywhere, conquer anything, and take an absolute thrashing without missing a beat. The real credentials come in when you consider that, in typical Land Cruiser fashion, you could likely drive it for 300,000 miles and do little other than basic maintenance. 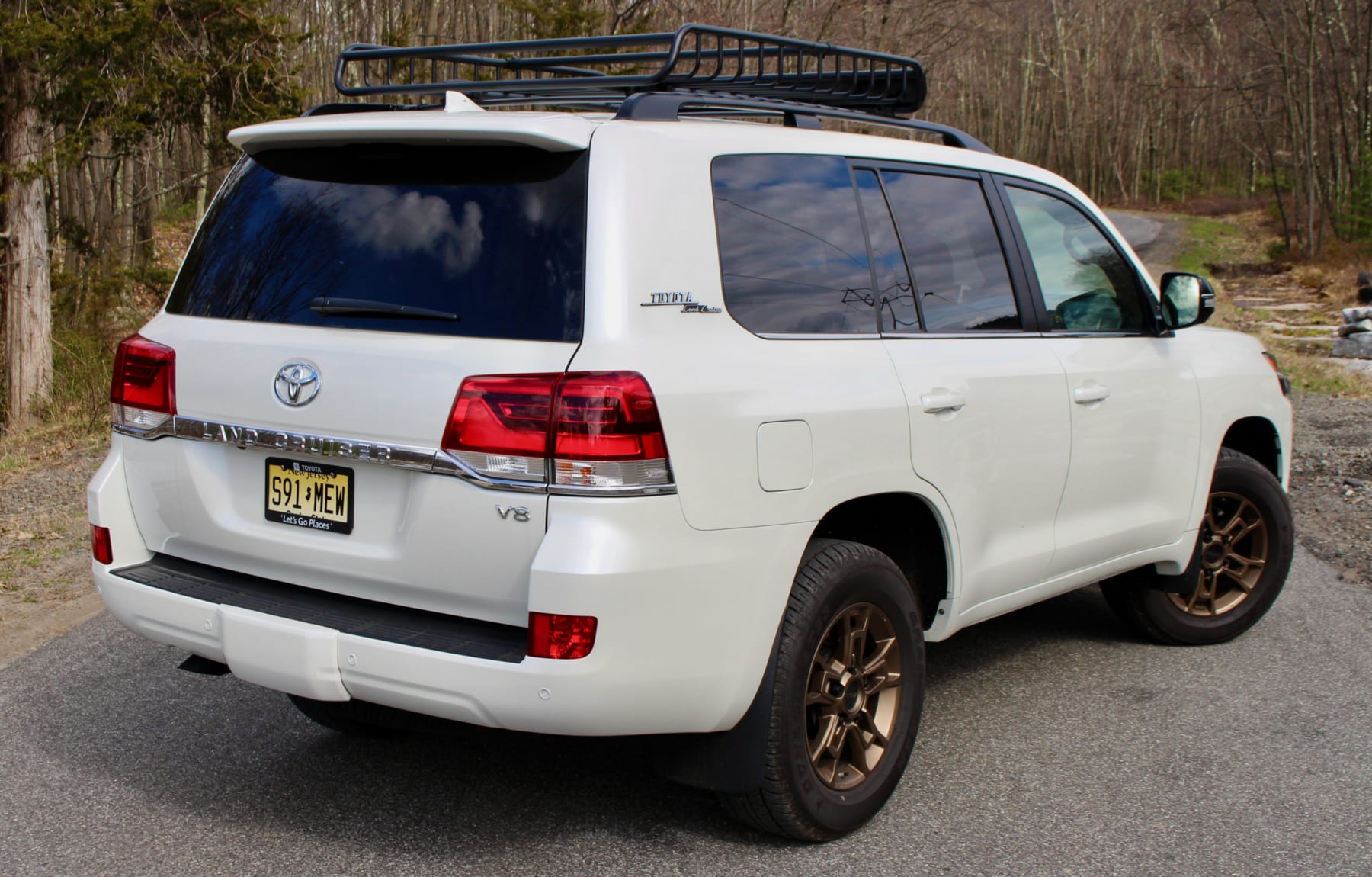 What’s been bugging me since first laying eyes on this Land Cruiser Heritage Edition is its place in the Toyota lineup and its place in the automotive world as the best, biggest, and most durable Toyota 4×4. Having spent years owning two very different 4Runners I was curious if the Land Cruiser is worth the price jump. Is it aspirational? Do you desire to own one? Does it serve as a proper halo vehicle for Toyota and for its famous 4×4 brand? 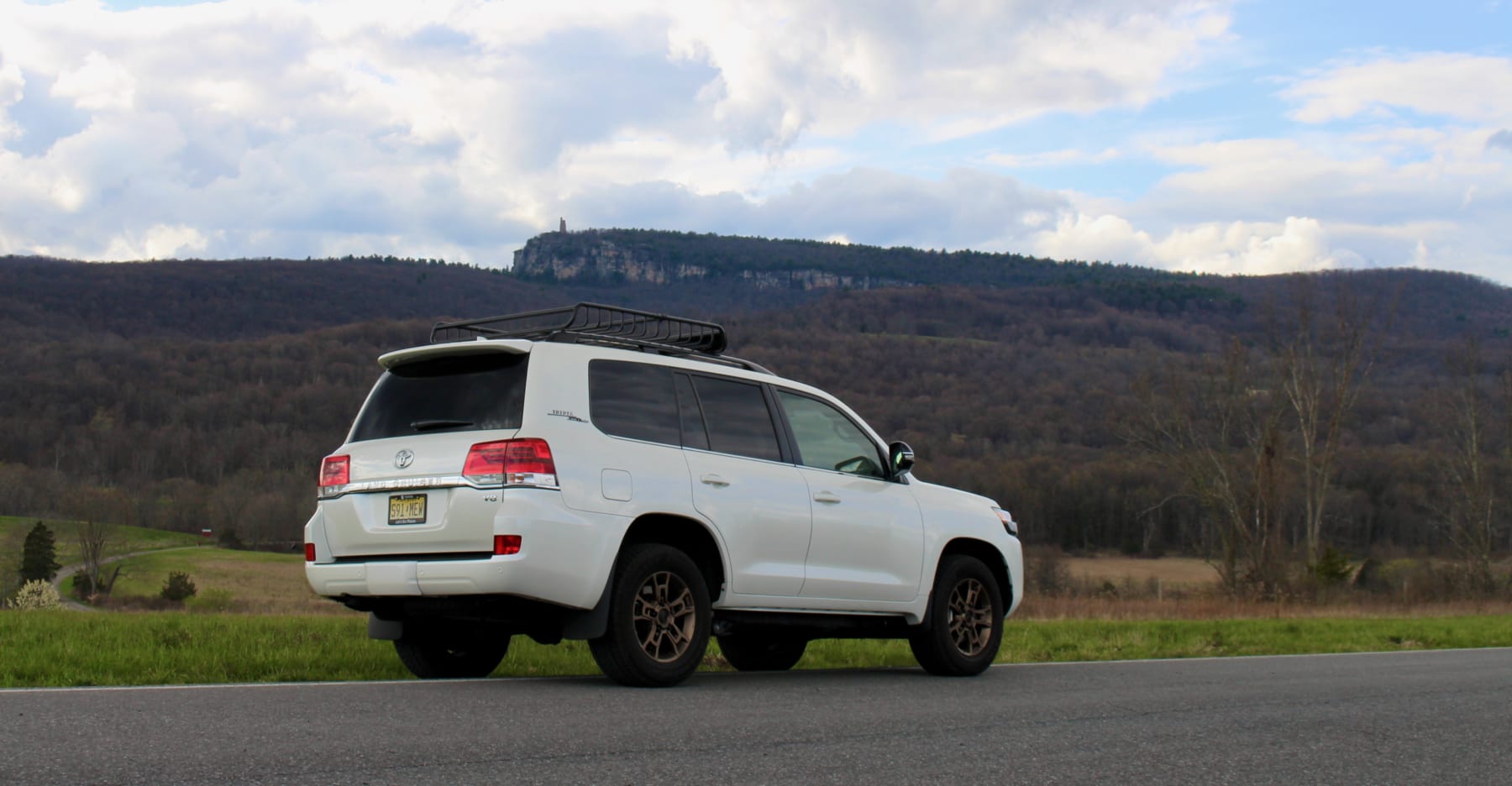 Mostly, yes. It checks the right boxes, looks the look, walks the walk. The capability and build quality are all that of the ultimate off-roader for the buyer looking for something that will cause zero headaches whatsoever over long-term ownership and coddle them a bit in the process. Toyota’s Land Cruiser is an outstanding vehicle. Even though it’s cliché, the Land Cruiser genuinely feels like it can go anywhere and emerge unaffected. But sadly the Heritage Edition package is let down by one thing: the roof basket. 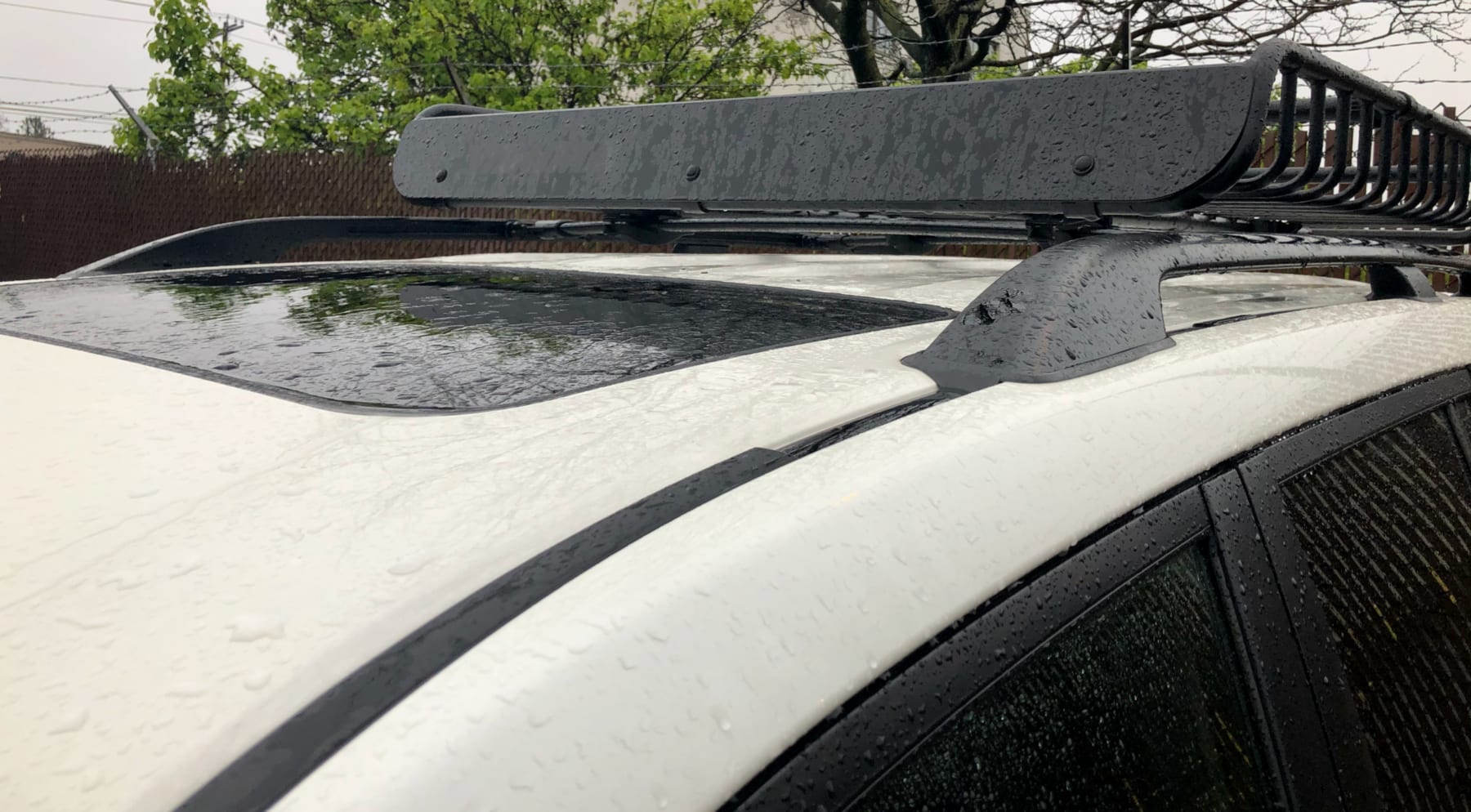 About that roof basket…

Consider this: The Heritage Edition package is meant to optimize the Land Cruiser’s off-road and overlanding capabilities, bringing it back to its roots. To get there Toyota removes the third-row seats, the center console cooler box, the regular Land Cruiser’s special leather, and the lower exterior trim pieces. Added are bronze BBS wheels, matching interior piping, Heritage Edition emblems, and black accents in place of chrome. And, as I’ve alluded to, it sadly also gets a Yakima roof basket. 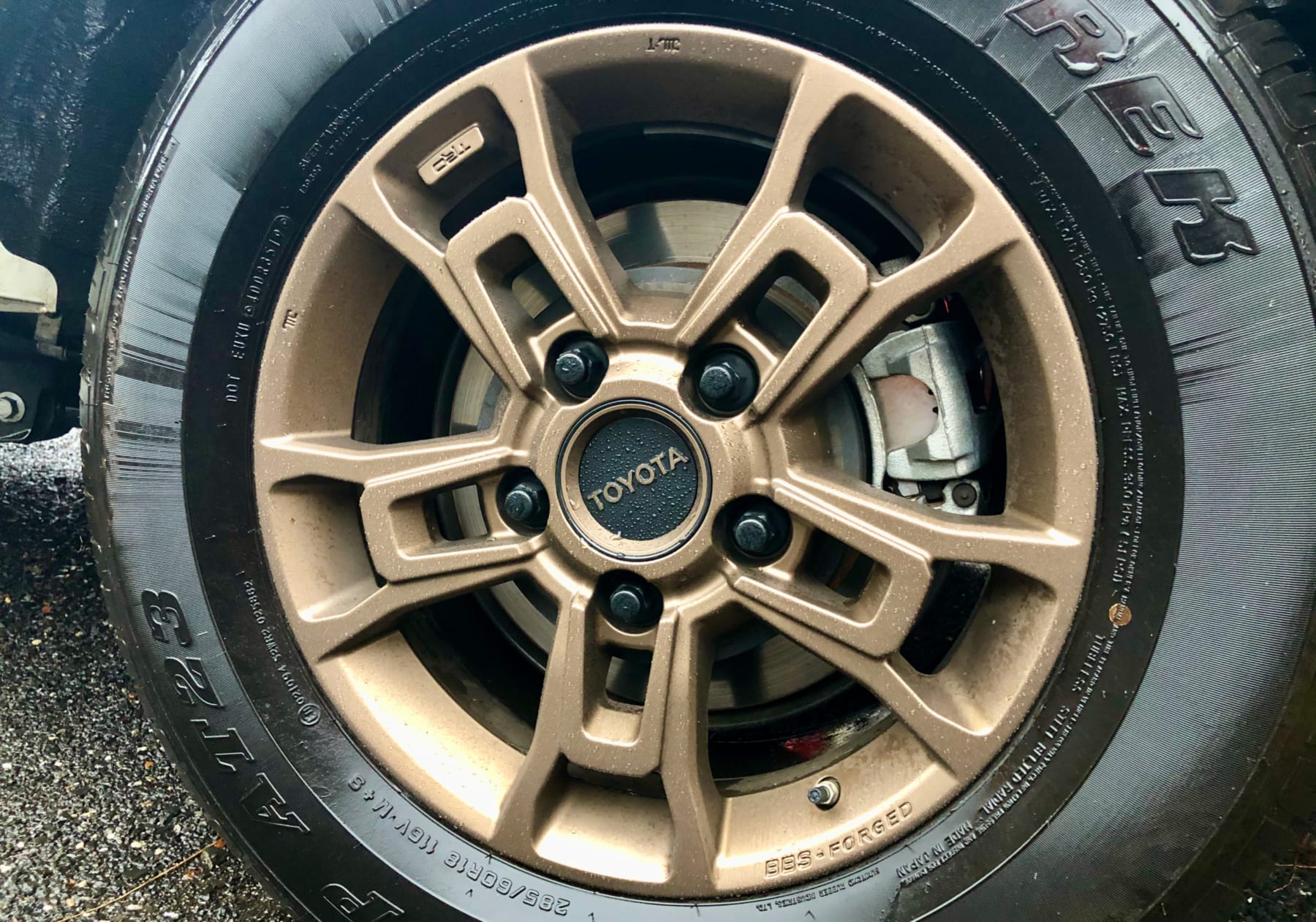 My problem isn’t with the unit itself; it’s well-built and examined on its own is by no means problematic. But affixed to the Land Cruiser Heritage Edition’s roof it becomes extremely so. The massive amount of wind resistance and noise it creates at speeds as low as 45 MPH is bothersome, to say the least, and it makes an already-tall truck even taller. Sure, you can remove the rack, but then why make it an integral part of the Heritage Edition package? 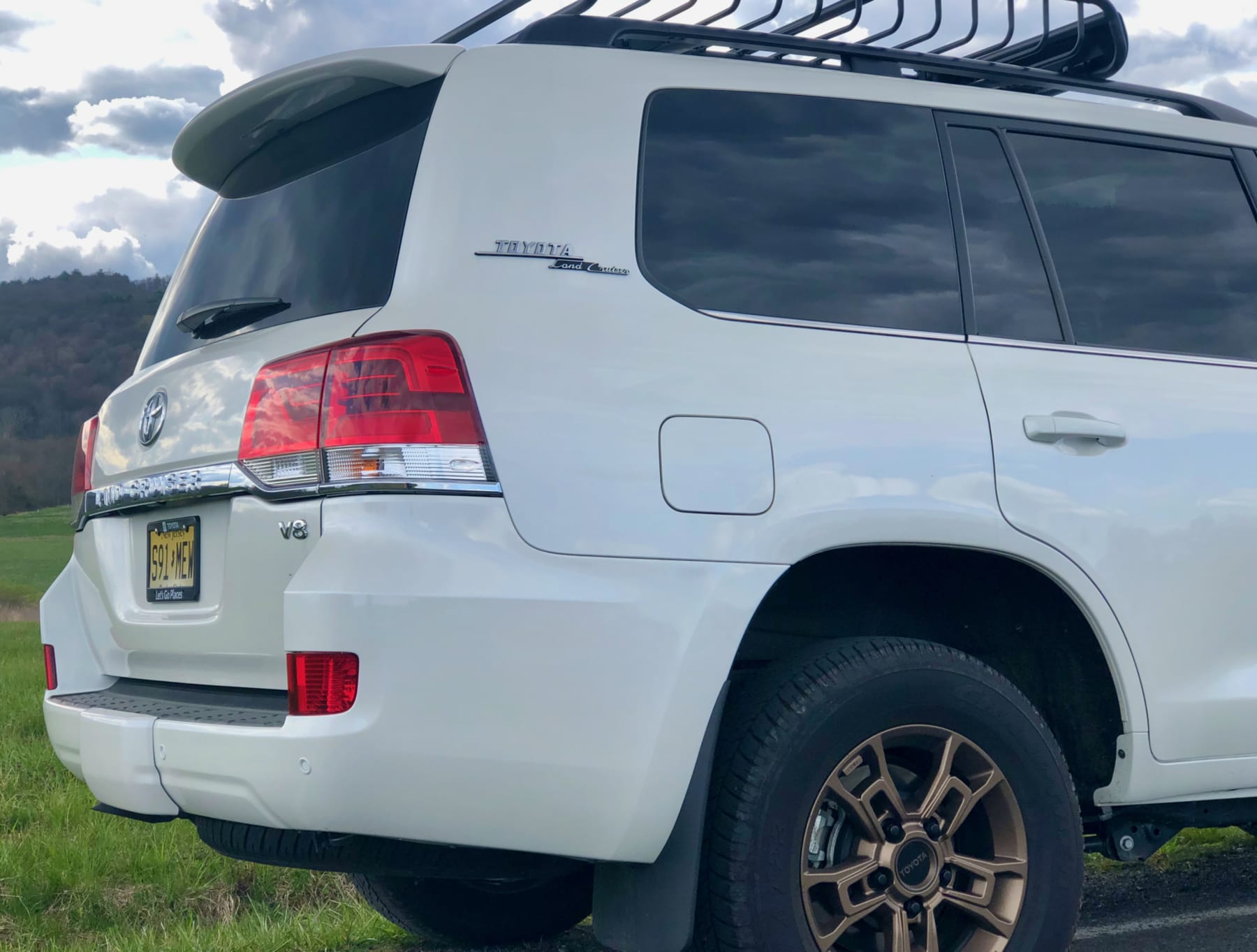 I’m going to chalk it up to a marketing gimmick: a desperate plea to draw in buyers that want to get into overlanding, or at least look the part. Good in concept but poor in execution. First, it’s not needed: Without the third-row seats the cargo hold is cavernous. Also, any real overlander is going to opt for a full-length rack. If nothing else, they could have added an actual wind deflector. As-is, the omnipresent, overbearing wind noise from above your head in an otherwise nearly-silent vehicle is infuriating. 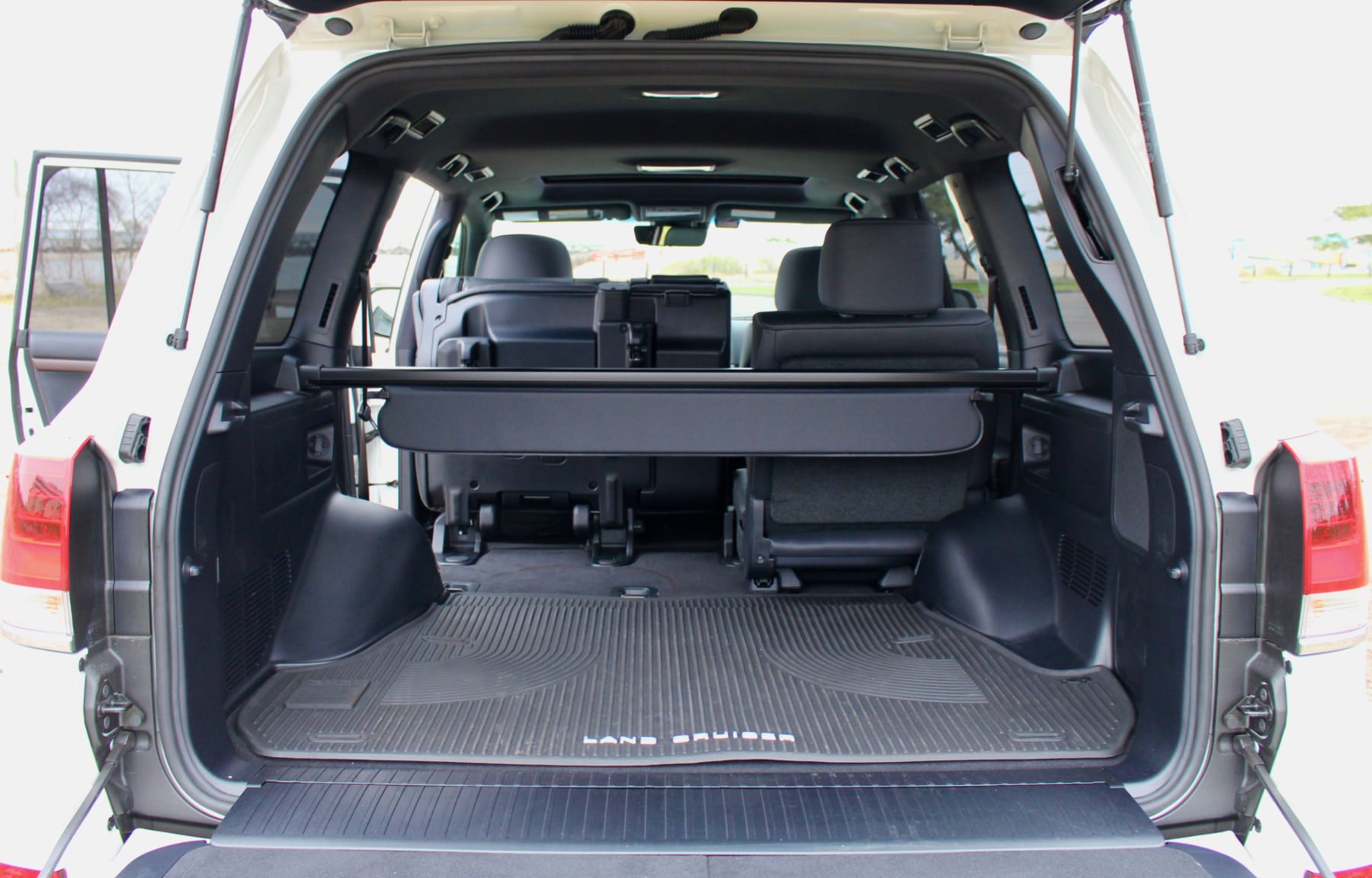 But I guess, in theory, if things went the way of I Am Legend, the roof rack could serve purposeful. Thankfully we are nowhere near a world of no infrastructure and outright lawlessness, a time of dire survival, a desperate existence requiring a vehicle capable of taking you anywhere with sufficient space to carry supplies and sleep in if needed and without worry of breakdown. In that world or our own, the Toyota Land Cruiser is king. If civilization collapsed and I were to need a vehicle, I’d want nothing other than the Land Cruiser Heritage Edition. It’s the perfect vehicle for the apocalypse.

Don’t get me wrong: I love the style of the Land Cruiser Heritage Edition. But what I’d have loved to see from the Heritage Edition is one they’ll never build: Cloth seats, fewer niceties, better tires, the least weight possible on this chassis. And no damn roof rack. As simplistic and as much akin to the original Land Cruiser as possible. Oh, wait: Toyota does build that! Sadly, they just don’t sell that version here. Sadly. Did I mention it’s sad they don’t sell it here? It’s sad they don’t sell it here. 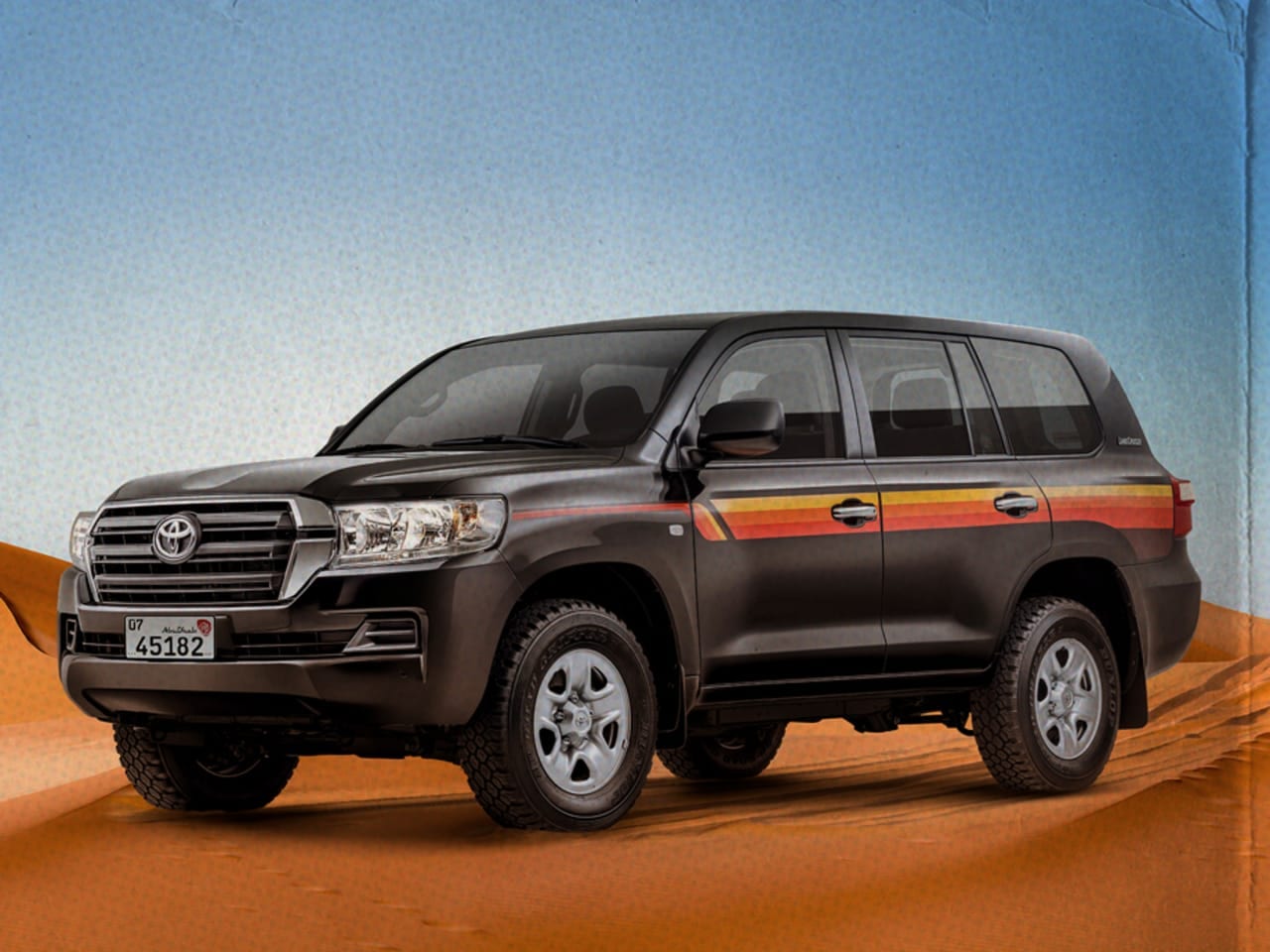 Yes, they actually build this. No, we don’t get it. / Source (you’re welcome!): https://www.toyota.ae/new-cars/land-cruiser-heritage/#gallery

As-is, the USDM Heritage Edition just slightly misses the mark for me. Despite its shortcomings and my hatred towards the roof basket, at the end of my week with the Land Cruiser– and less than a year removed from saying goodbye to my 5th-gen T-4R– I had fallen for the big Toyota. Despite the sticker shock and negative feelings towards a roof-mounted piece of metal, I fell for the Land Cruiser. Unlike my Miata, closing the Land Cruiser’s doors seal you off from the world entirely. It’s peaceful, calming, and utterly isolating inside. The cabin is a chamber of serenity and between this and the running gear, you feel like nothing can harm you. The Land Cruiser Heritage Edition is unflappable, unfazed by seemingly everything.

I get it now

The Heritage Edition package might not be perfect but, survivalism or not, the Land Cruiser is the world’s best four-by-four. And the Heritage Edition is the best iteration of the Land Cruiser. And that makes it the best iteration of the world’s best, most dependable luxury 4×4. Or at least ours. There’s unquestionably room for improvement and the Land Cruiser is desperately ready for an update, but if this is the truck for you and you’re buying it for its true merits, the shortcomings simply do not matter. Because the truck won’t leave you stranded, won’t leave you needing more capability, and won’t, ever, ask anything from you. Objectively it’s nowhere near so, but subjectively the Toyota Land Cruiser is simply the best. And now I’m firmly a believer.

I don’t love everything about the Land Cruiser. And I don’t love everything about the Heritage Edition. And I especially don’t love that our Land Cruiser Heritage Edition isn’t the one sold elsewhere. But I can’t help it; I love this truck. It’s far from perfect, but that’s what makes it so. I cannot and will not fault anyone for buying it, ever. And I look forward to seeing them on the road now, in the near future, and forever.