Thunder cracked and the unmistakable sound of rain pounding on the windows stopped me in my tracks. Wind howled. Flashes of lightning cast shadows not regularly there. I looked outside and saw the white Land Cruiser parked steady, unmoving against the awful weather. Then I glanced back to my surroundings — my living room — and reality struck once again.

On the Saturday morning the 2020 Toyota Land Cruiser Heritage Edition was in my care I found myself doing exactly the opposite of the adventure I was supposed to be on. COVID-19 forced the cancellation of a trip I had been planning for nearly fifteen years. Traveling to Utah by way of Colorado with my brother and cousin. Exploring the scenic region’s iconic trails and landmarks in a borrowed 4Runner TRD Pro. That was not to be.

Somehow, a Toyota still found its way into my driveway even if my mega trip had been called off. As a shamelessly self-proclaimed off-road expert and 4Runner aficionado, I had to find out for myself if the venerable Land Cruiser — and especially this limited-run, trail-and-overlanding-focused Heritage Edition — would deliver on the promise of the truck’s selling points: durability, reliability, off-road prowess, and the increasingly important Land Cruiser name cachet. I had a week to test these merits. But there I sat, on my couch, pouring Frangelico into my coffee.

[Disclaimer: Toyota provided the vehicle and a tank of gas for the purposes of this test.] 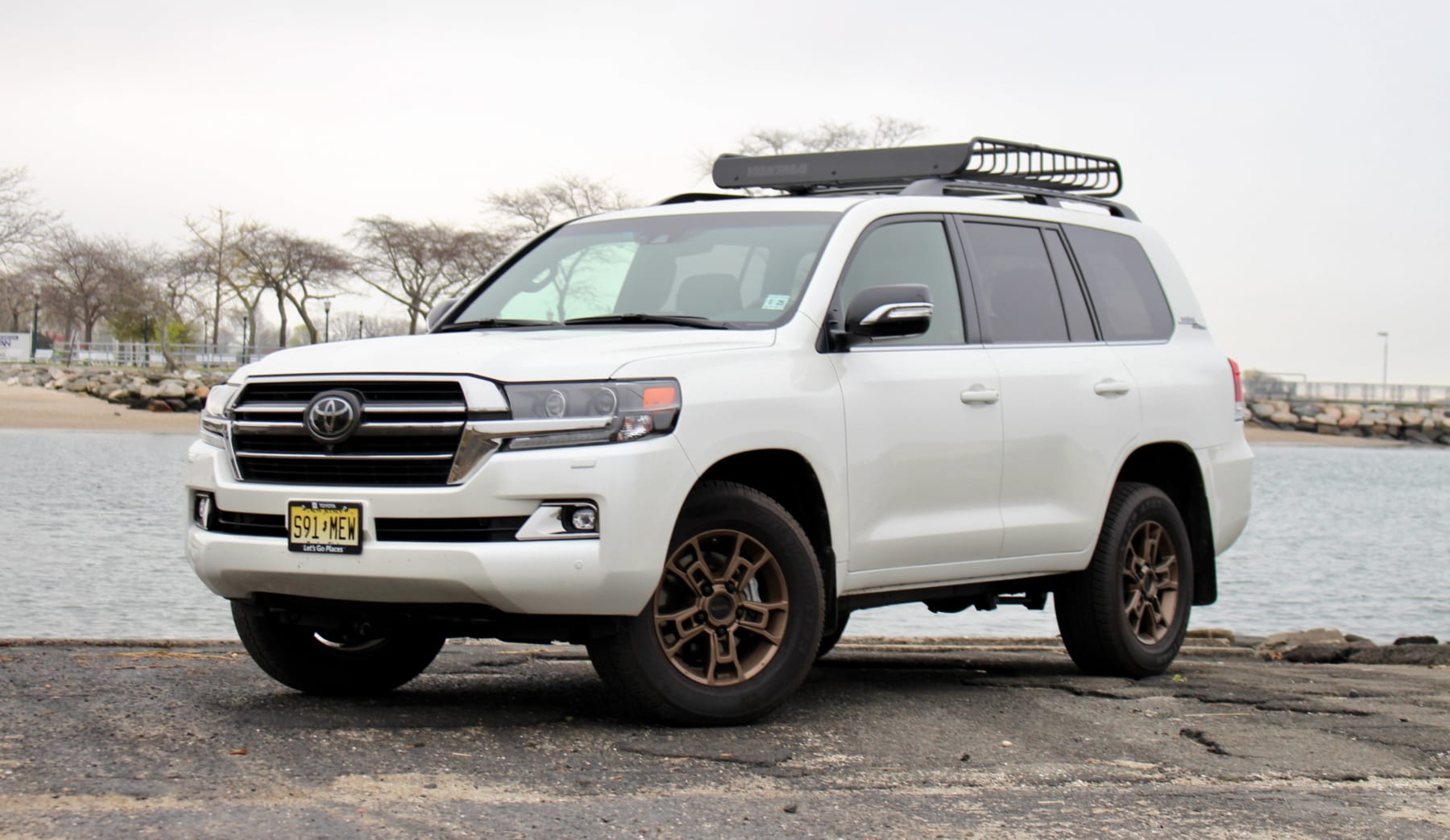 Once a functional workhorse, the Land Cruiser’s image has evolved to reflect a cult-like following in the off-road world. It’s for good, substantiated reason: the Land Cruiser is more durable and beefier than a 4Runner. It’s less problematic and longer-lasting than a Wrangler. And it’s less headache-prone and still more capable yet than a Land Rover. It may not have the flash that some of these other well-recognized nameplates but on-road or off, few models are as well-regarded, as long-running, and as globally-respected as Land Cruiser. Here we have the ultimate version of the 200-Series rig, the ultimate iteration of the luxury-meets-capable prowess of the modern Land Cruiser. Could it live up to the hype?

As generous as it was on Toyota’s part, I couldn’t shake the feeling that the Land Cruiser Heritage Edition loan was a consolation prize. Connecticut isn’t quite Monument Valley, and so I found myself pouring hazelnut liqueur into my coffee, looking out my window at the truck sitting in the torrential rain, and basking in my sorrows. But enough of my sob story: Amidst the COVID quarantine my wife and I had a week with a Land Cruiser. And not just a Land Cruiser, but the Land Cruiser. A truck that has garnered massive off-road praise and is the faction of a cult-like obsession among Toyota four-by-four die-hards. Despite my off-road and Toyota 4×4 proclivities, I had yet to experience one for myself. That’s right: I had yet to so much as even drive, much to my Land Cruiser-owning co-host’s chagrin. 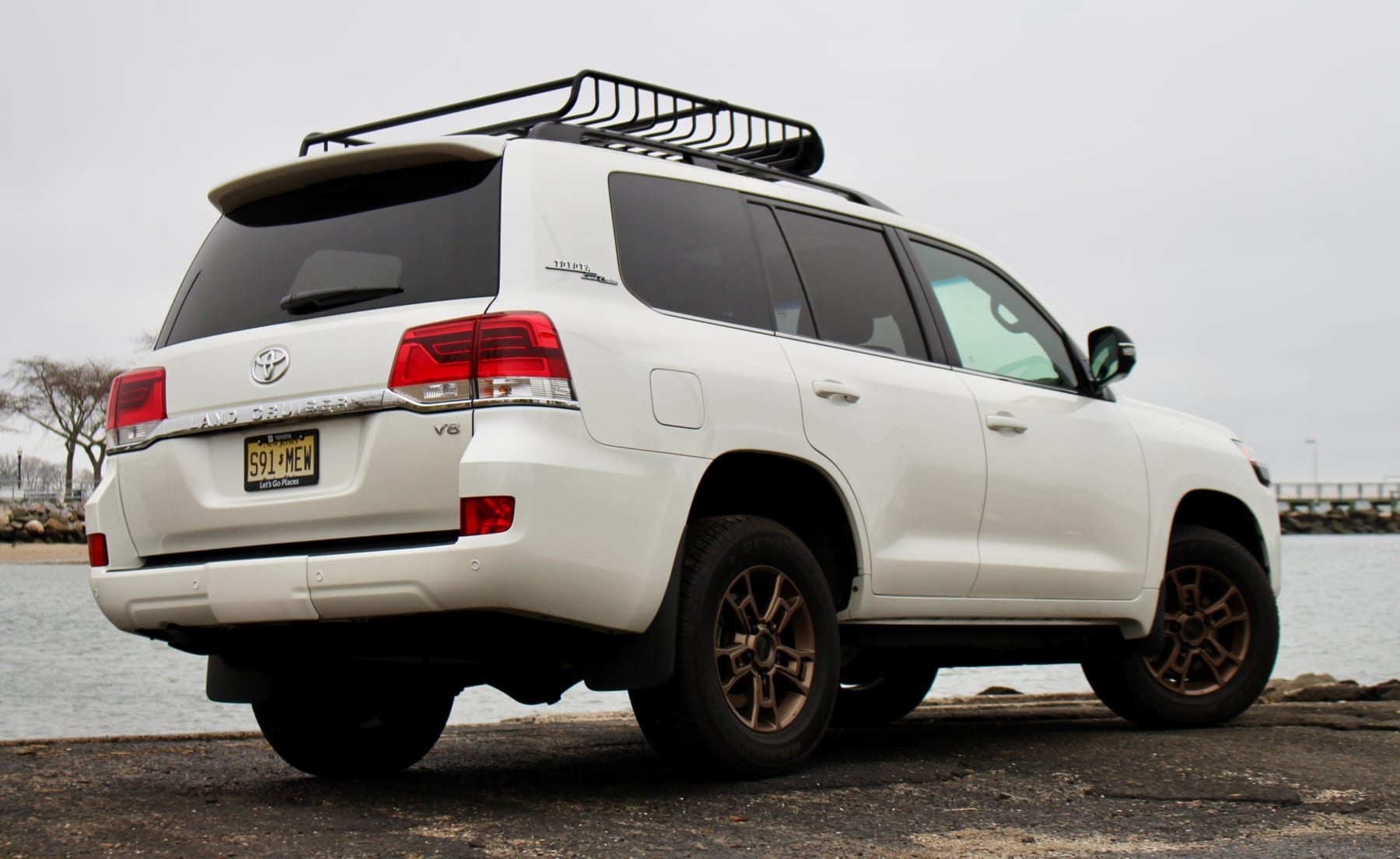 I Am Legend… and a Land Cruiser

But…there I sat, on my couch. I tipped another splash of sweet, alcohol-infused deliciousness into my second coffee and mindlessly scrolled through the streaming service offerings. My hand hovered over I Am Legend. Years ago I read the book on which the movie is based but, despite my love for the genre, I never followed it up by watching the movie. “What else is there to do?” I wondered, and clicked “Play.” Maybe it was reality or maybe it was the liqueur, but the parallels between the movie and the coronavirus outbreak struck me as eerily similar. Frantic, chaotic life devolves from what once was. Humans are terrified of infection. Leaving one’s home requires braving the unknown and a level of preparation that was unheard of in normal, prior life.

Luckily, that’s the worst of it. Though hundreds of thousands have died from the virus– far, far too many– and there’s no diminishing the sorrow surrounding those losses, thankfully the pandemic in which we are living is nowhere near that portrayed in the aforementioned film. However, it got my imaginative, paranoid mind thinking: If things went completely south, if the severity of widespread sickness and that of the disease itself were to wreak havoc upon our world so that it diminished to the point depicted in I Am Legend, what would be the best vehicle to survive with? Will Smith famously opens the film’s introduction by blasting through Central Park in a Mustang GT500. Later he graduates to an apocalypse-outfitted Expedition. Interesting choices, but both are wrong.

I could have you told that before watching the movie. But deep thought, another dash of liquid courage, and a week with the Land Cruiser convinced me even further of such. 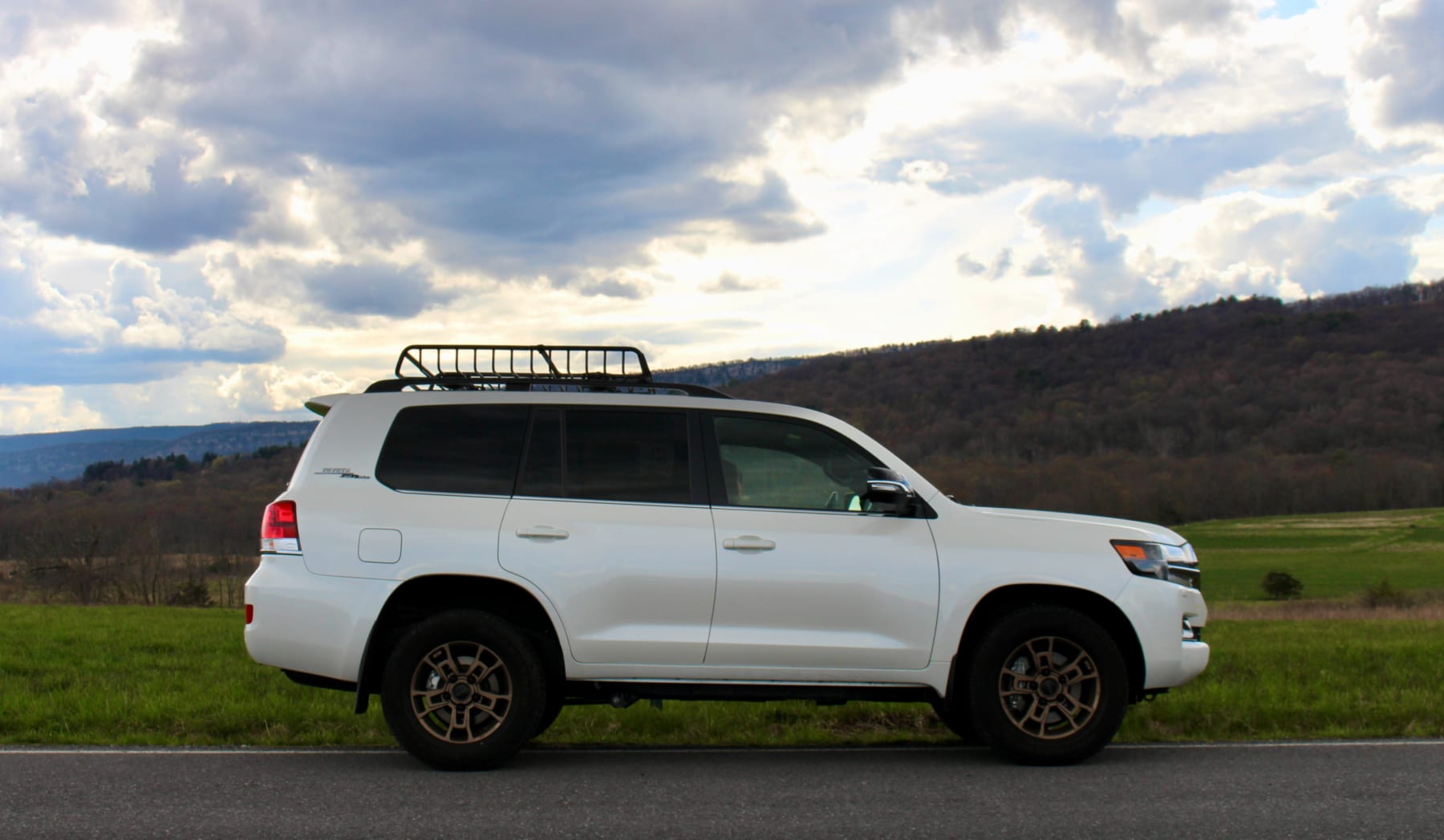 Locked down with someplace to go?

So what could we do to test the Land Cruiser’s merits and explore its apocalypse-friendliness? With the COVID closures, that proved problematic. Going for a drive was an option, but the places to end up remained mostly closed. What could we do with a nearly ninety-thousand-dollar four-by-four and a free Sunday with less miserable-looking weather?

Again, problematic. We live in a city. I work in the same city. Connecticut and the surrounding states were still under quarantine with mandated social distancing orders. Only essential business remained open. Accordingly, off-road parks— the ideal testing grounds for the Land Cruiser — were closed and we would have to be careful with where we went. To review the Land Cruiser Heritage Edition based solely on my commute would be a disservice to Toyota and to the vehicle at hand as it would neither get anywhere near close to scratching the surface of the vehicle’s capabilities nor would it provide a reasonable basis for evaluation. This truck called for an adventure.

We knew what to do, and that was to get out. Acting on instinct, my wife and I did what we do best when desperate for an escape: We hit the road and headed to our college town. 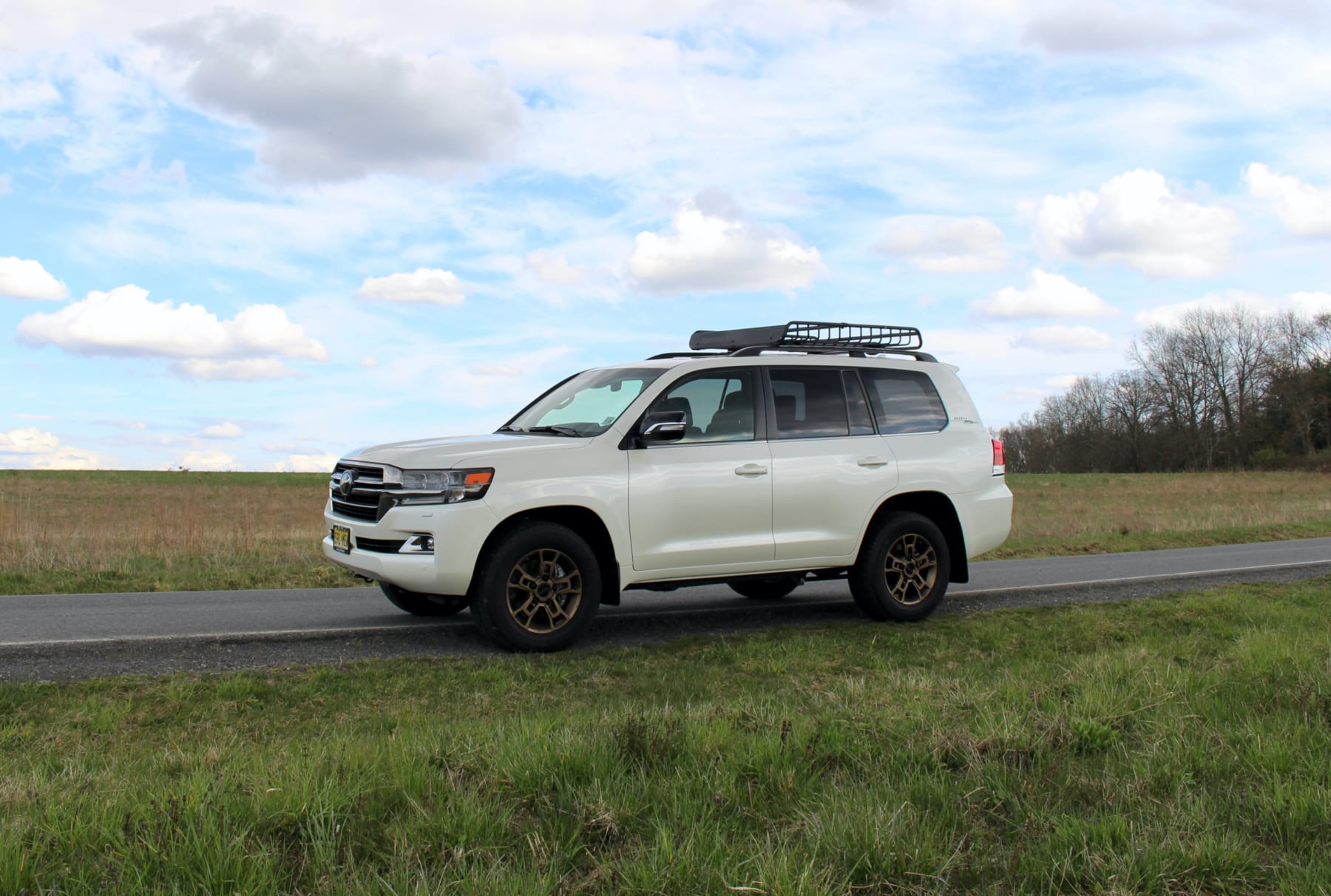 Roughly eighty miles separate our apartment from the town’s doorstep. The first fifteen consists of the kind of winding backroads perfectly suited to my Miata, but the Land Cruiser weighs nearly three tons and has a hysterically high COG. To my surprise, the Land Cruiser could have fared far worse. KDSS buttons down the suspension while the substantial steering weight keeps you in touch with the reality of the truck’s size and mass. The steering feel is numb but direct. It mimics the involvement needed to accurately pilot the Land Cruiser both on and off-road. Nobody in their right mind would think the Land Cruiser Heritage Edition to be a twisty-tarmac play-thing, but it held its own. 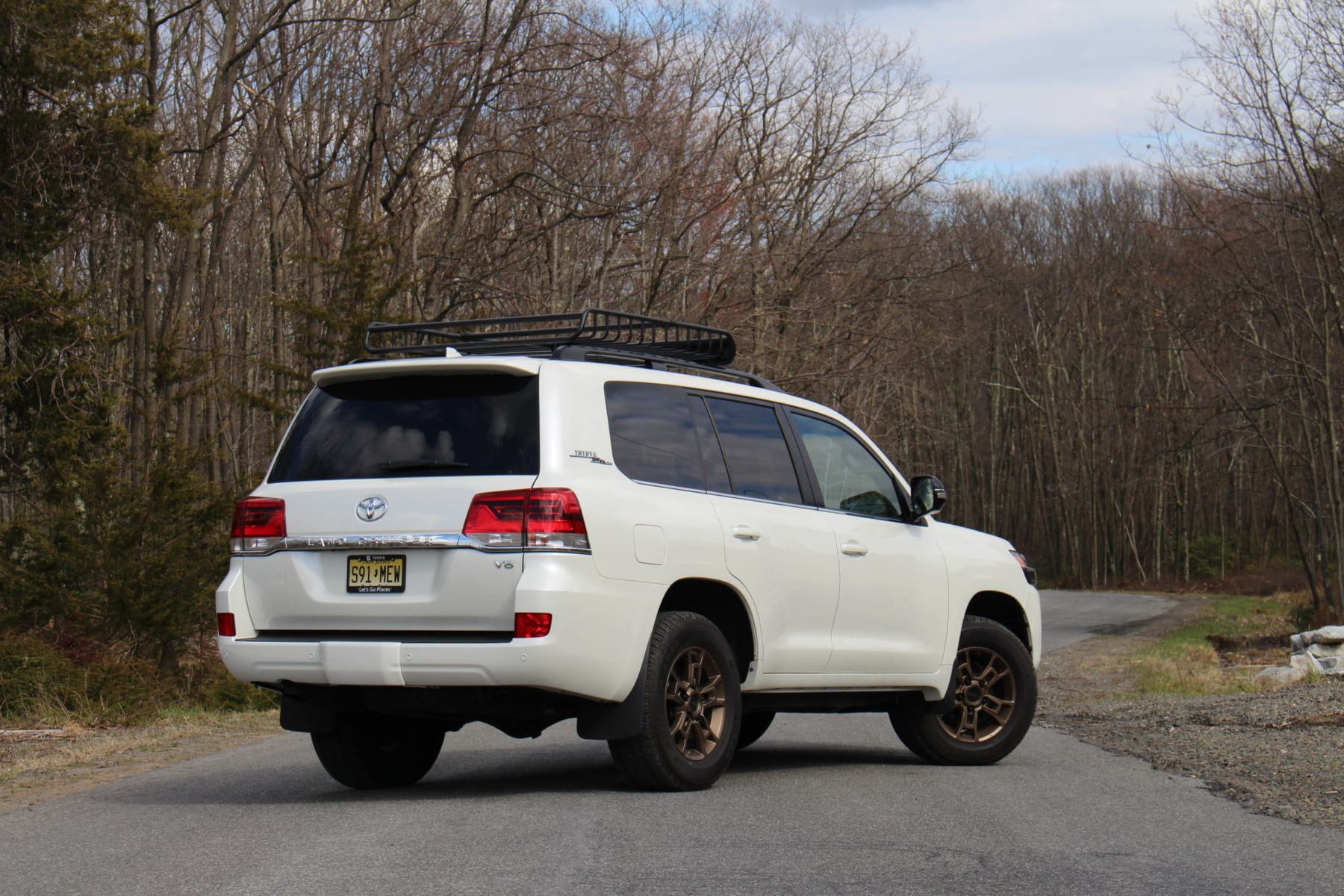 We hit the highway and the Land Cruiser Heritage Edition began to shine. The vast distance between seat and road masks speed concerningly well for the shape and stature. Despite the occasional wander, the Land Cruiser Heritage Edition is a marvel of the manifestation of body-on-frame cruising and road-tripping capabilities. Highway stability and momentum are both helped and harmed by heft but the Land Cruiser takes it in stride. As we exited the highway the trip meter showed we had driven most-of-the-way to one-hundred miles. If we didn’t know better it could easily have been twenty. Or ten. The comfort is supreme. It eats up miles, V8 chugging quietly, only the odometer and gas gauge reflecting the distances covered.

Alas, the Land Cruiser Heritage Edition’s petrol-holic tendencies. At 24.6 gallons, a large allowance of fuel can’t mask the inefficiency. Don’t expect Prius-like MPG– or even that of a V6 4Runner– and it doesn’t come as a shock. Still, the needle pivots at a frightening rate. The other instantly-noticeable demerit revealed itself in the roof basket…but more on that later. 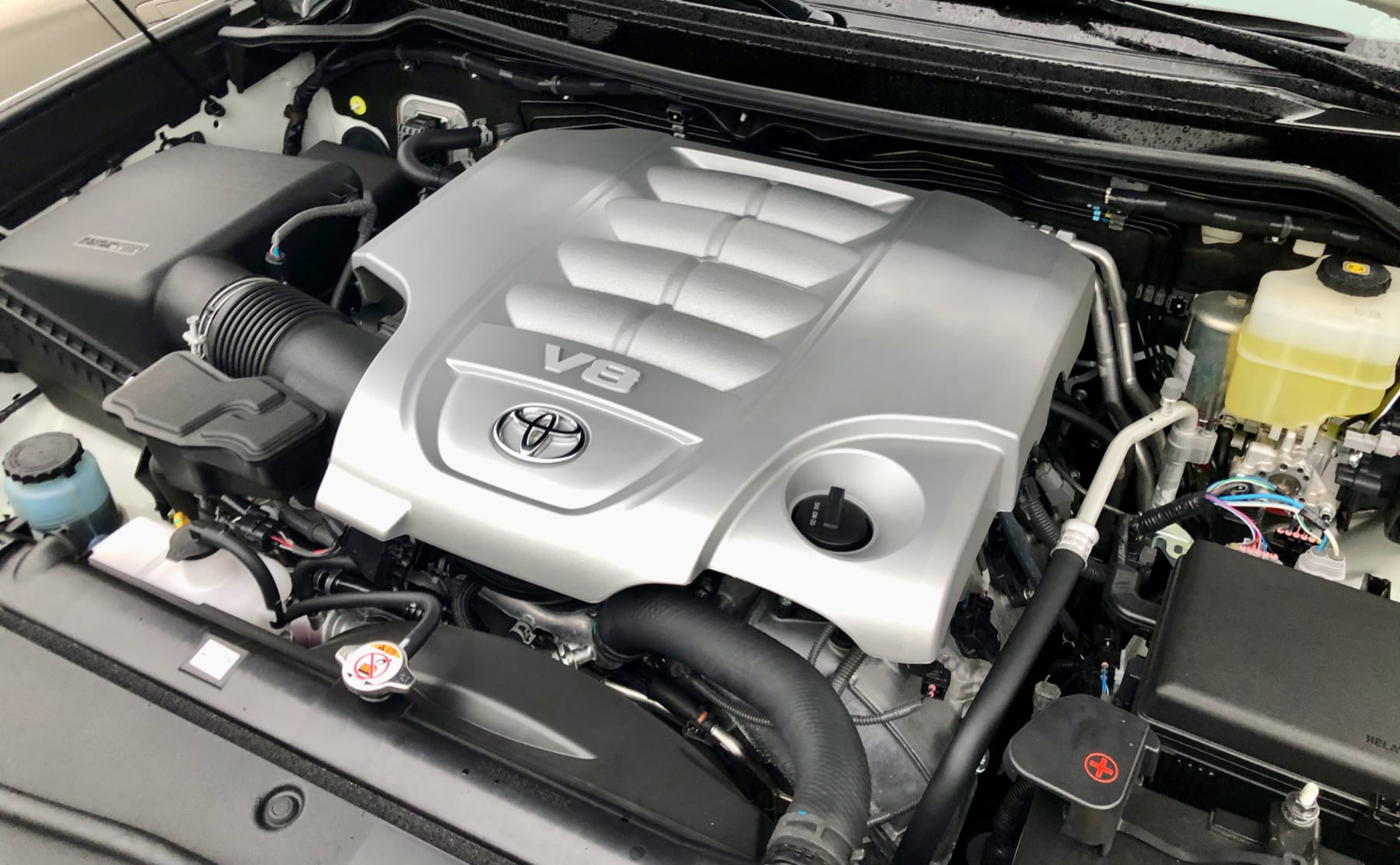 We arrived in town and found that spring had sprung. The change wasn’t noticeable on the freeway but once immersed in the little village it was a literal and figurative breath of fresh air. Trees were budding, flowers blooming. Better yet, a glorious reprieve from the prior week’s nonstop rain was on full display in the clear skies and bright, shining sun. We opened the Land Cruiser’s windows and sunroof to bask in the glory of it all. The mountain-side hippy town had slightly more life than our visit a few weeks prior, with the warm weather encouraging people to escape lockdown and enjoy the outdoors. In an effort to support one of our favorite small restaurants we grabbed curbside takeout and, parked in a remote spot on campus, used the drop-down section of the Land Cruiser’s split tailgate as a makeshift picnic table. Not its intended purpose, just simply beautifully suited to it. 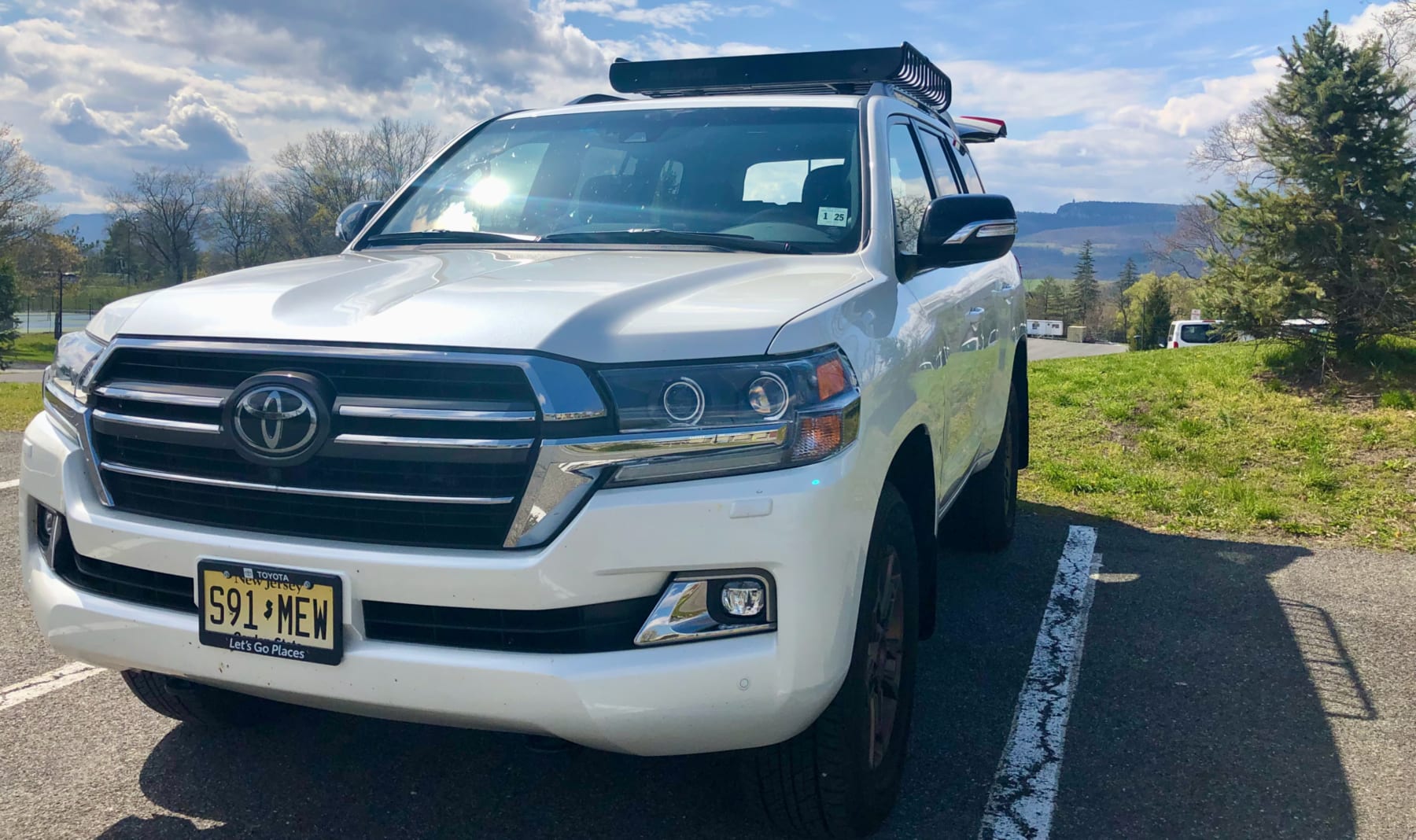 Stomachs full, we hopped back in the Land Cruiser and, intending to hike, pointed towards the top of the mountains where the best trailheads lie. Enjoying the Land Cruiser’s laid-back comfort, we took the even-more scenic route via every dirt road possible. Hardly hardcore, these are nothing more than unpaved, somewhat-maintained residential woods streets that a 2WD car on street tires can survive sans damage if driven slowly. But it was plenty entertaining as after months of being hunkered down, minimal dirt is still better than pavement. That said, the Land Cruiser Heritage Edition couldn’t have cared less that we were trotting over dirt and rock rather than tarmac. I laughed as bumps and small rocks were soaked up by the truck’s suspension with not a care in the world. Luxury rarely befits off-roading, but it translates marvelously to the Land Cruiser Heritage Edition’s off-pavement prowess. Far too soon, it was over. 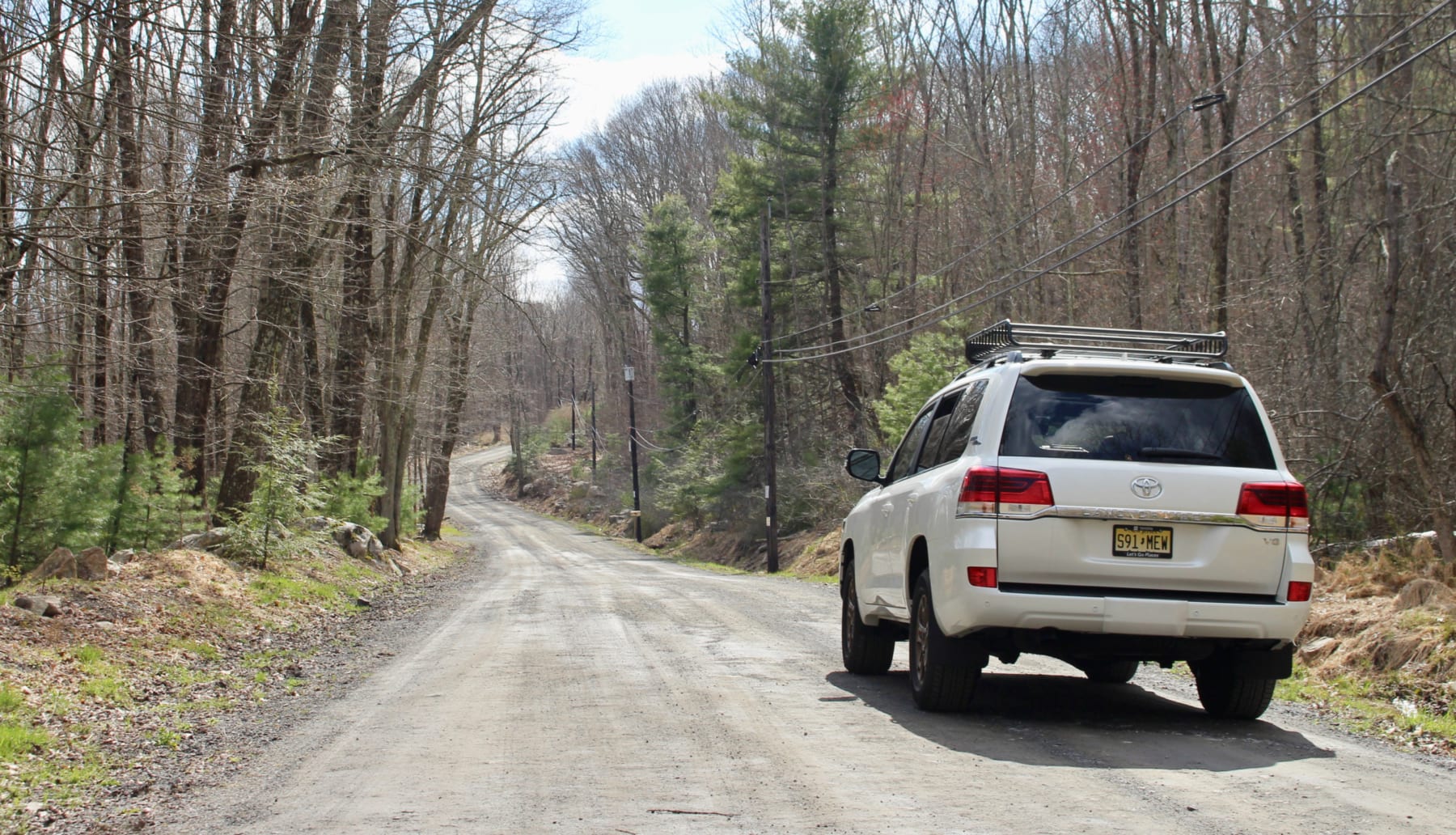 To our dismay, and truly unsurprisingly given the weather, each and every sanctioned hiking park was beyond capacity. “Lot Full” signs were on display behind park rangers who shooed arriving vehicles away. Even our hidden, quasi-legal trail had too many cars present for COVID-comfort. We shrugged and instead went exploring, turning down a few roads we had never driven despite passing countless times. Shortly after and with our adventure palates quenched due in large part to the horror-movie-esque locales we stumbled upon, pulled an about-face, and headed home. 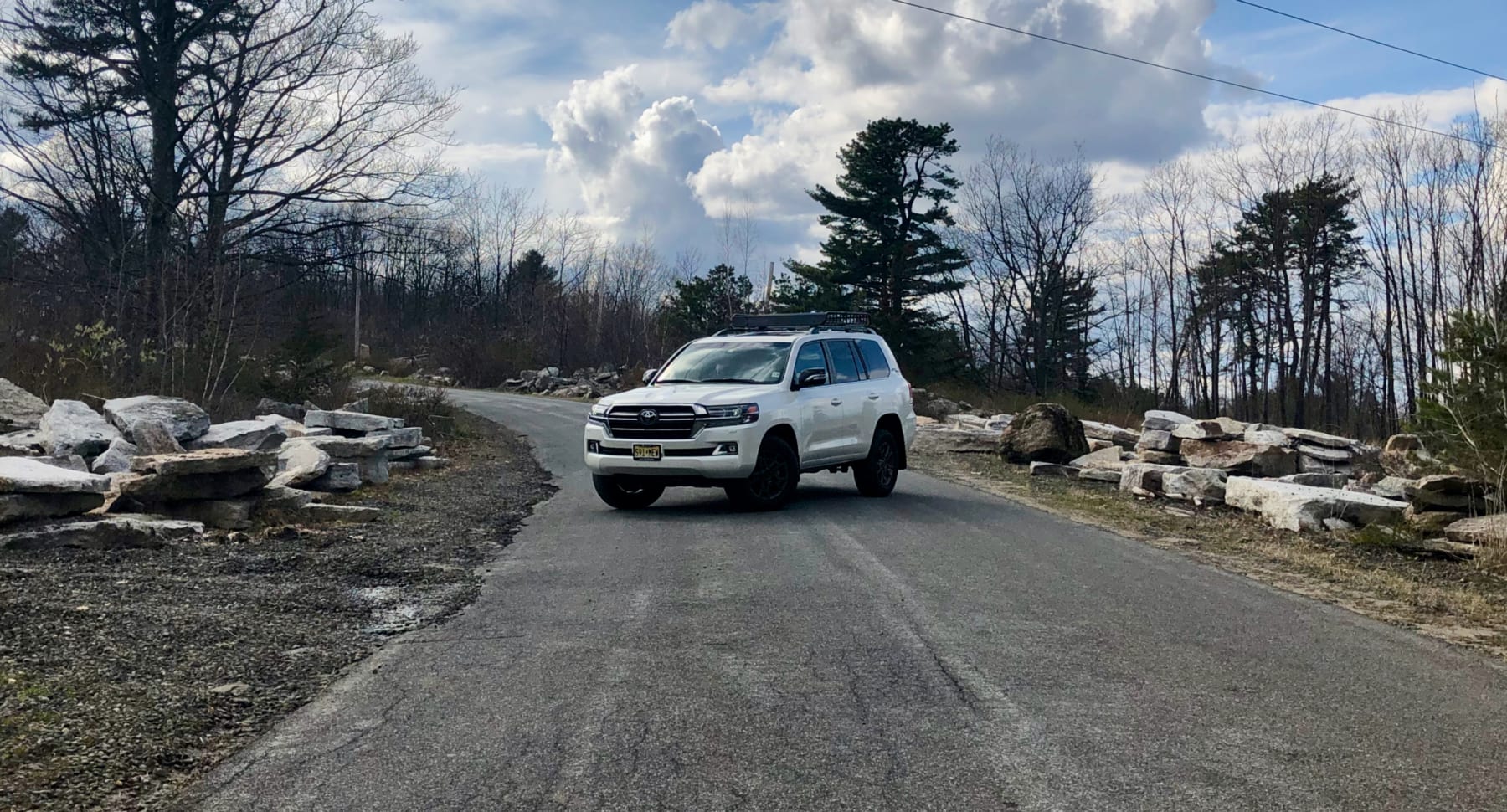 Jumping back on the highway, the Land Cruiser Heritage Edition’s ability to handle both the minimally rough in the same breath as the long freeway jaunts was proving impressive. The truck makes easy work of any surface, turning the tedious trivial and the difficult easy. Peace of mind in this truck is paramount. It doesn’t drain the driver whatsoever to pilot. That goes for if it’s in a parking lot, at speed, or when bouncing quickly from one to the other.

We arrived home as the sun set. I sat down, cracked a beer, and pondered the Land Cruiser’s worth. Having spent nearly the entire day in the Land Cruiser, I had plenty of thoughts on the truck. My mind wandered back to my 4Runners, trucks I loved, and to this day miss dearly. Was this name-famous Toyota 4×4 better than my own name-famous Toyota 4x4s? I was still working that out. 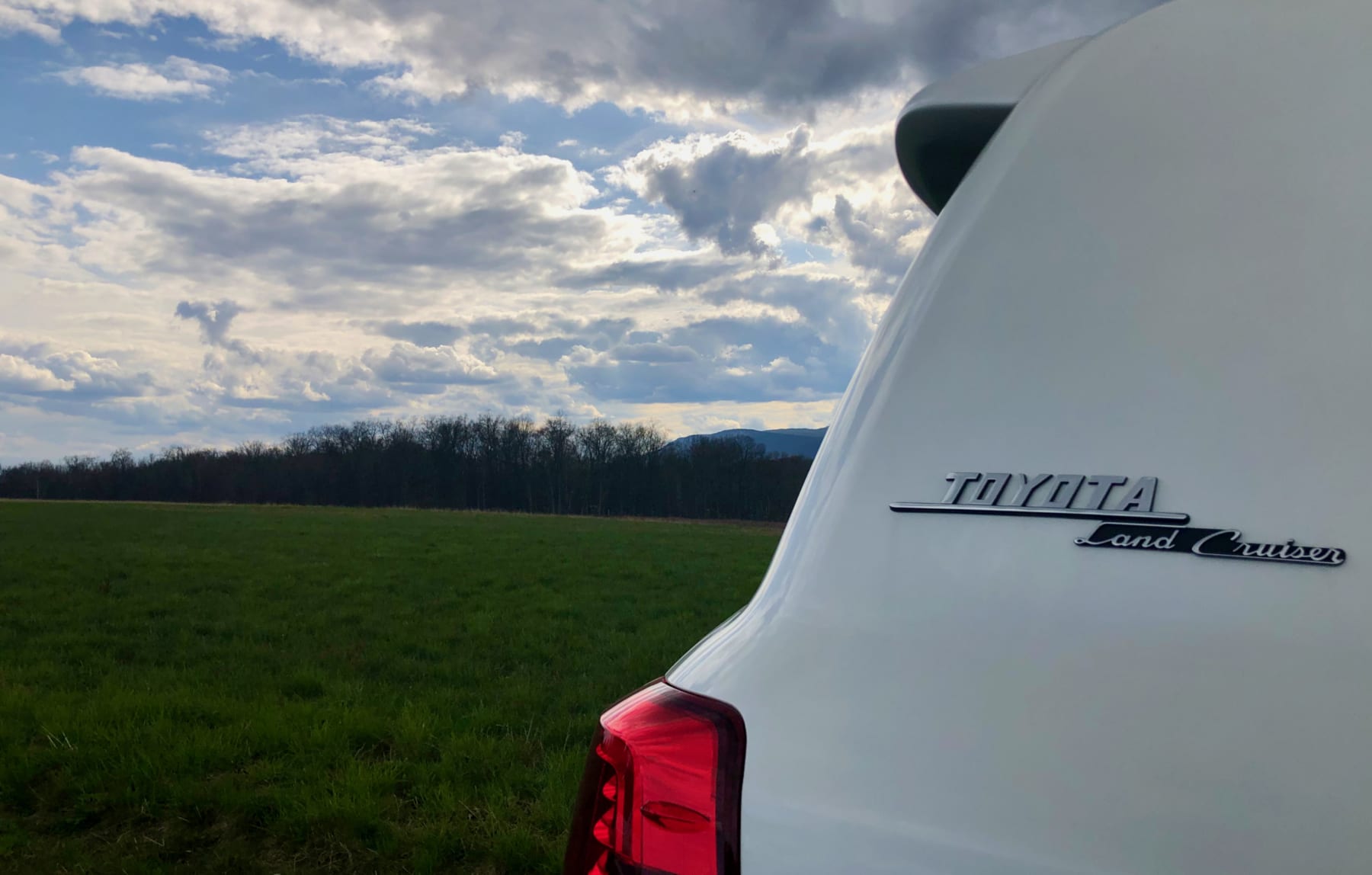