Welcome to Thursday Trivia where we offer up a historical automotive trivia question and you try and solve it before seeing the answer after the jump. It’s like a history test, with cars! This week’s question: What racing event supplanted football as part of the Tournament of Roses New Year’s Day festivities in Pasadena California from 1904 to 1915? If you think you know the answer, make the jump and see if you are right. This past Friday’s New Year’s Day marked the 127th time that the venerated Tournament of Roses Rose Parade has monopolized Pasadena, California’s main drag, Colorado Boulevard. The parade was originally the idea of the Valley Hunt Club, a hoity-toity social club patronized by the local elite, and it became just part of a series of events celebrating the New Year. Orchestrating those events eventually became to overwhelming for the small social club, and in 1895 the Tournament of Roses Association was formed to run the day’s festivities. That’s right, it’s not just the parade, but a series of events that actually start early in the fall with the selection of the Rose Queen and her princess court, who are picked out of entrants from the Pasadena area high schools and Pasadena City College. This year’s Queen is Erika Karen Winter, a 17-year-old senior at Flintridge Preparatory School. Way to go, Erika! 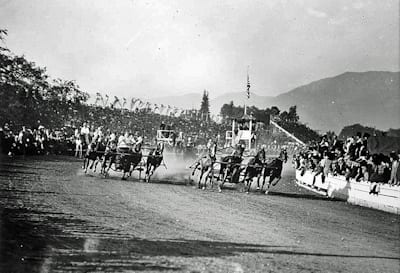 Another of the New Year’s Day traditions is the Rose Bowl game, intrinsically connected with the parade as both team’s marching bands participate in the five and a half mile parade, and each school (Stanford and Iowa this year) enter a float. Football has long been part of Pasadena’s New Year’s celebration, but that wasn’t always the case. For more than a decade another kind of contest took its place, a race in fact, and perhaps not one that you might have expected. From Tournament of Roses History:

(1904) First chariot races staged, inspired in part by the best-selling book Ben-Hur. The chariot races, held at Tournament Park, continued until 1915, when it was decided that, while the event was indeed popular, it was far too dangerous and expensive.

Sporting events and danger seemed to go hand in hand with the early Tournament undertakings. The year prior to the first chariot races saw the first Rose Bowl football game played. The actual Rose Bowl was almost two decades in the future so the game was played at Tournament Park, which is now Cal Tech’s athletic field. Only 1,000 seats were provided for the Michigan vs. Stanford matchup, but more than 8,500 spectators showed up for the game. The fight for the limited seating caused strong words to be exchanged, and eventually a stampede. Miraculously, no one was seriously injured in the melee, and Michigan went on to rout Stanford 49-0. It was due to this poor planning and lopsided score that football was abandoned and, at least for a short time, chariot racing put in its place for the New Year’s Day spectacle. Image: quem dixere chaos