When the Ford Escape debuted in 2000, the market for “softroaders” was still small. Unibody car based platforms were not yet a popular thing. Toyota’s RAV4 and Honda’s CR-V were the two big players in the segment.

Now, almost twenty years later there are twenty-two different vehicles in the segment. By the end of 2020, there will be thirty. Mid-sized crossovers are the number one selling section of the industry, and it’s importance to the market is only going to become greater. Multiple manufacturers are stating that outside of truck sales, the market has shifted to be 70% CUV/SUV and 30% passenger vehicle.

Where at one time Ford was one of the major volume sellers in the segment, in the last few years it’s fallen behind. While the Escape did sell a little over a quarter million units in 2018, Honda sold 388,000 CR-V’s and Toyota sold 427,000 RAV4’s. So, the all-new 2020 Escape comes at a time when it’s sorely needed.

The 2020 Escape has a longer wheelbase and is wider than the outgoing model, though it is ten to twenty millimeters shorter overall. One of the big items here though is lost weight. While the number varies depending on the trim level, on average the new Escape lost two hundred pounds from the outgoing model.

The Escape makes no bones about being a “soft roader”. It is designed, in Ford’s words, to be “Progressively Urban” rather than a rugged off roader. The front end styling is right off the new Focus that we will not be getting in North America. Two welcome styling items are present though, a lower belt line and thinner A-pillars. You can thank extensive use of high strength steel for both.

Ford has taken a step back from the design focus filled with belt lines creeping higher and higher. That trend takes away side glass area. Not just for styling but to give occupants a “bank vault-like feel”. What you notice immediately when you step inside the new Escape, especially with the panoramic sunroof, is a very airy cabin that gives you a sense of a much larger space than exists. Ford has also taken steps with the styling and trim designs to try and give the new Escape a more premium feel.

Big news for this fourth generation Escape is not just the return of a hybrid option, but a plugin model as well. Both are powered by a revised 2.5-liter Atkinson cycle four-cylinder engine. The hybrid gets a 1.1-kWh battery pack while the plugin model gets a 14.4-kWh unit. While Ford did not announce specific numbers at this event, it did say that the front-wheel-drive hybrid Escape should do 550 miles on the highway while the plugin will have at least thirty miles of range. In the hybrid, you will be able to drive up to 85 mph on battery power alone. 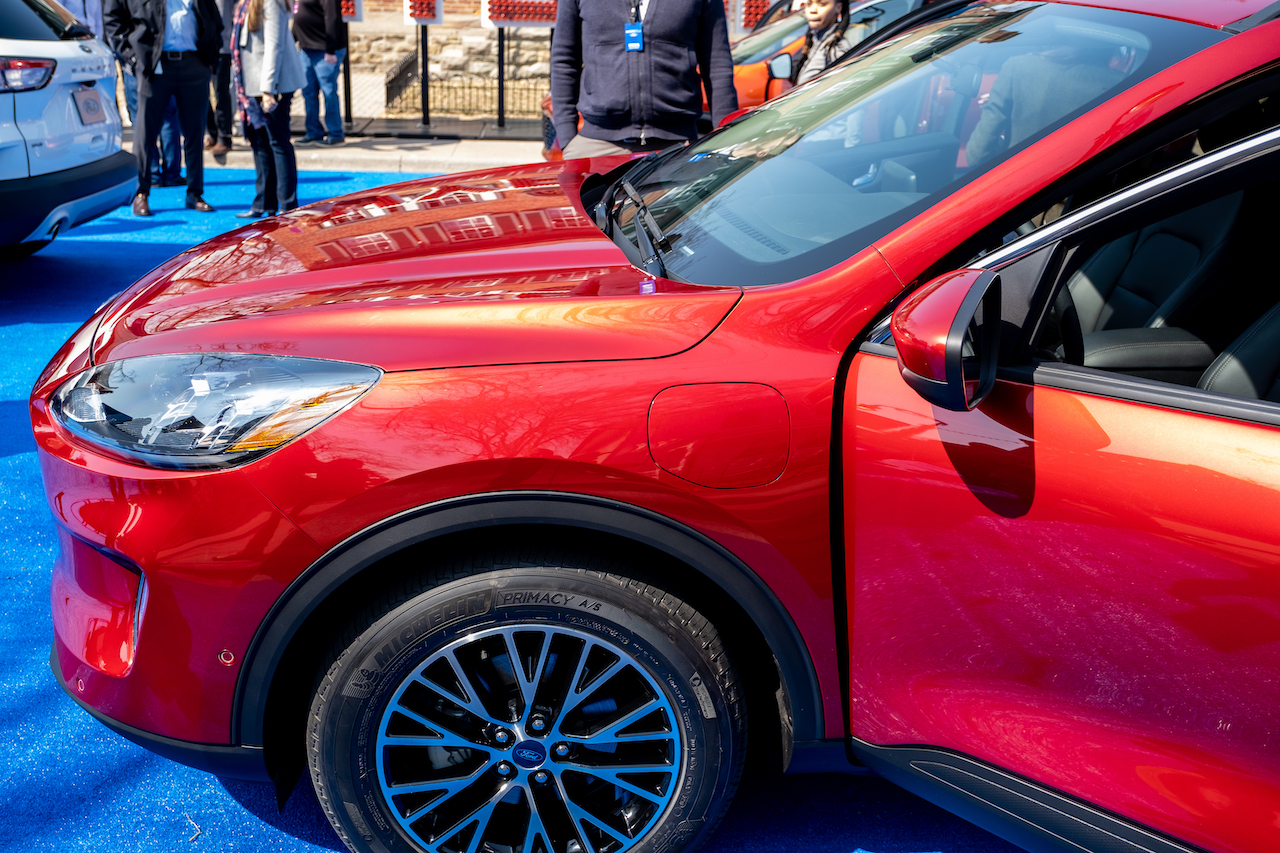 The “standard” hybrid will be available with all-wheel-drive, the PHEV will be Front Drive only.  They will also be rated to tow 1,500 pounds thanks to an oil cooler for the CVT transmission.

Tradition ICE power is offered in two choices. A 1.5-liter, three-cylinder EcoBoost engine developing 180 horsepower and 177 pound-feet of torque. This engine also comes with cylinder deactivation. It will run on two cylinders when the engine load allows. The other option is a 2.0-liter EcoBoost four-cylinder developing 250 horsepower and 275 foot-pounds of torque. They will both be backed by an eight-speed automatic transmission and able to tow 3,500 pounds.

All models come with a rotary shift selector and five drive modes. Normal, Sport, Eco, Sand/Snow and Slippery are the choices with the tech filtering down from the new Explorer.

Active Park 2.0 is available on the Titanium trim level.  Adaptive cruise control with stop/go and lane centering along with evasive steer assist are available as an option on SE and SEL and standard on Titanium. 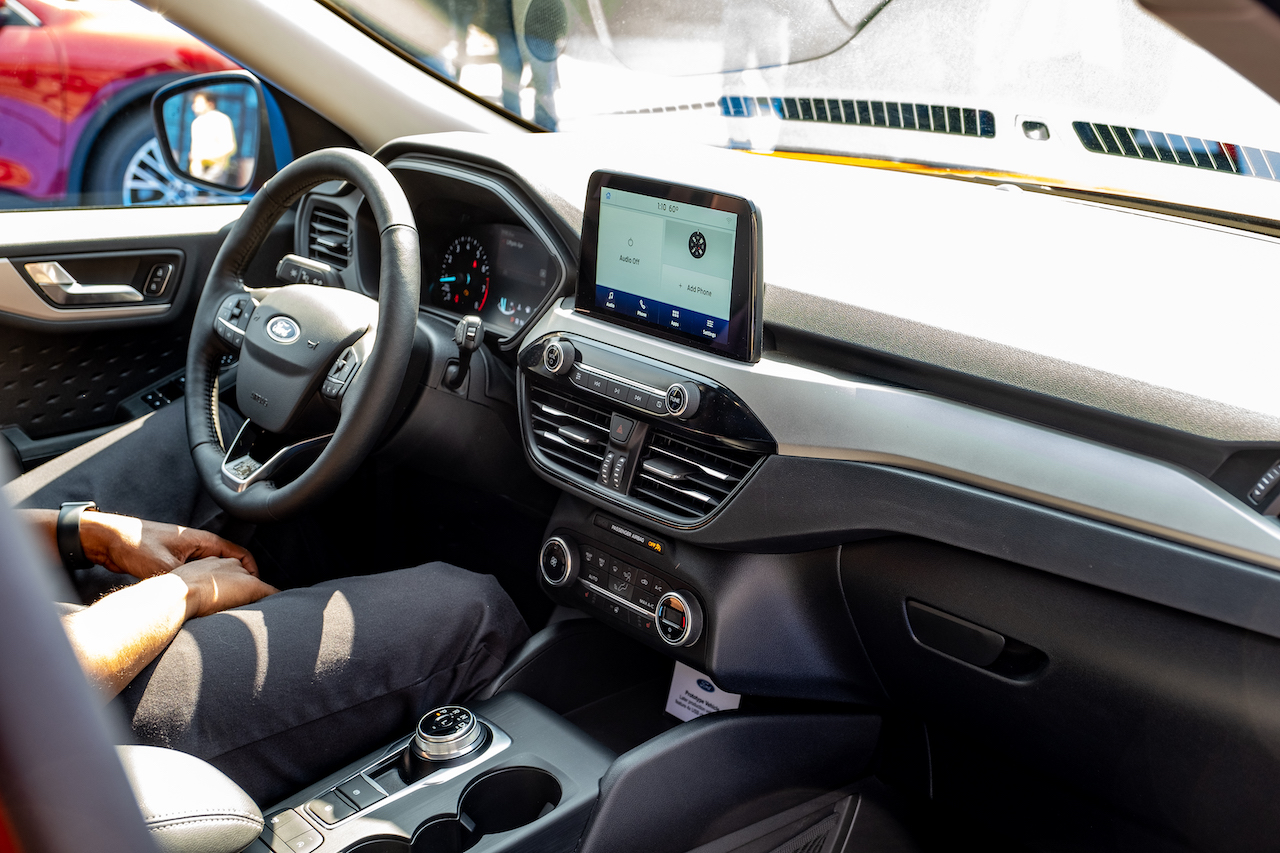 The instrument panel is handled by a 12.3-inch display, which changes appearance based on the drive mode selected. All trims but the base S will get an eight-inch centrally mounted touch display with Sync 3 for infotainment. It comes with usual items like CarPlay and Android Auto as well as Ford Alexa and Waze.

As mentioned earlier, the cabin has a very open feel. The materials are of good quality. Maybe not quite up to the level of the class-leading Mazda CX-5, but very close. A change that came from owner feedback is the steering wheel now featuring an additional 1.3 inches of rearward adjustment. The rear seats also slide fore and aft to adjust for rear seat room or cargo space. The rear seats, which are 60/40 split seats, now have six inches of travel.  In the furthest rearward setting, they provide more rear seat space than a Chevy Suburban according to Ford.
[Editor’s note: Hmmm… we’ll have to test that claim, Ford.] 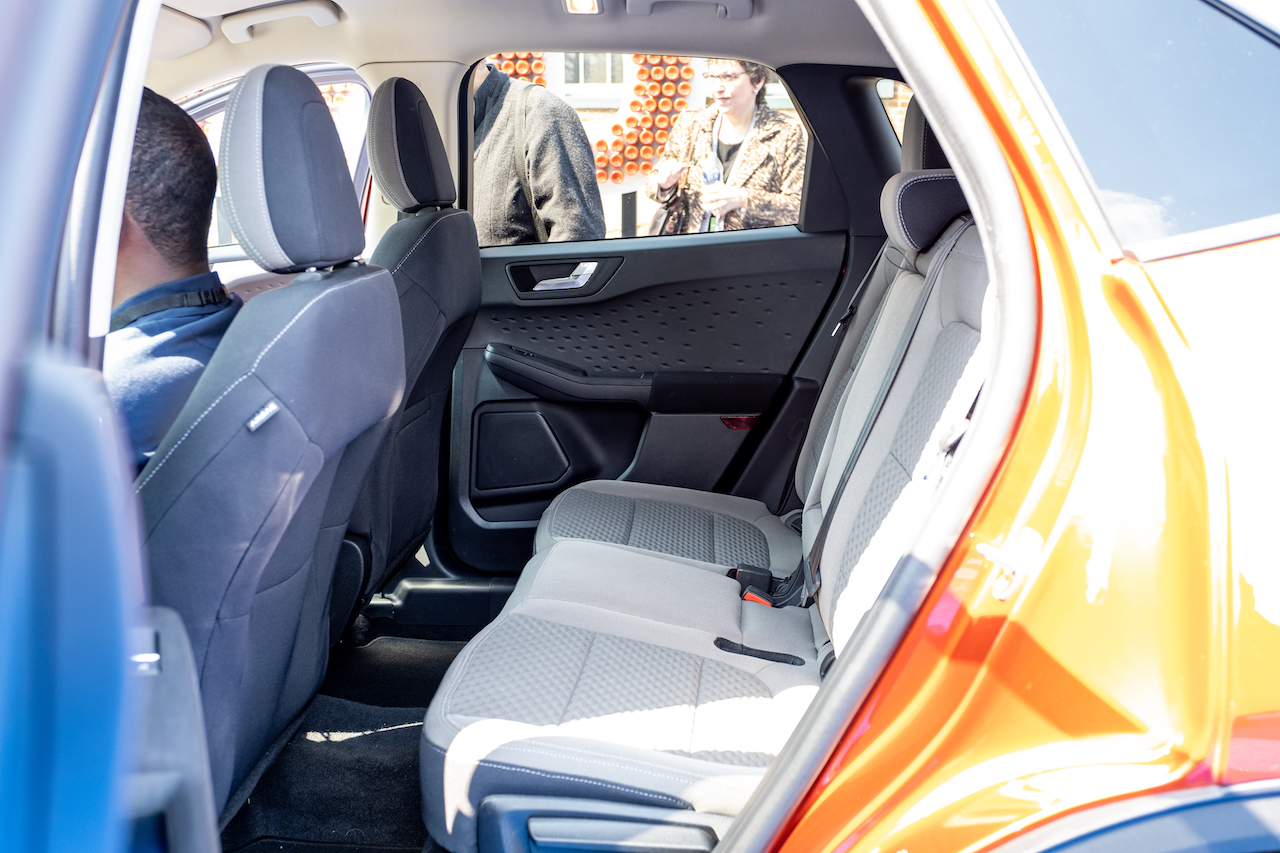 Ford was also proud to point out the cargo capacity of the Escape. Not only can it handle four large suitcases, but it can also take a 36″ dog crate or four adults and four golf bags. 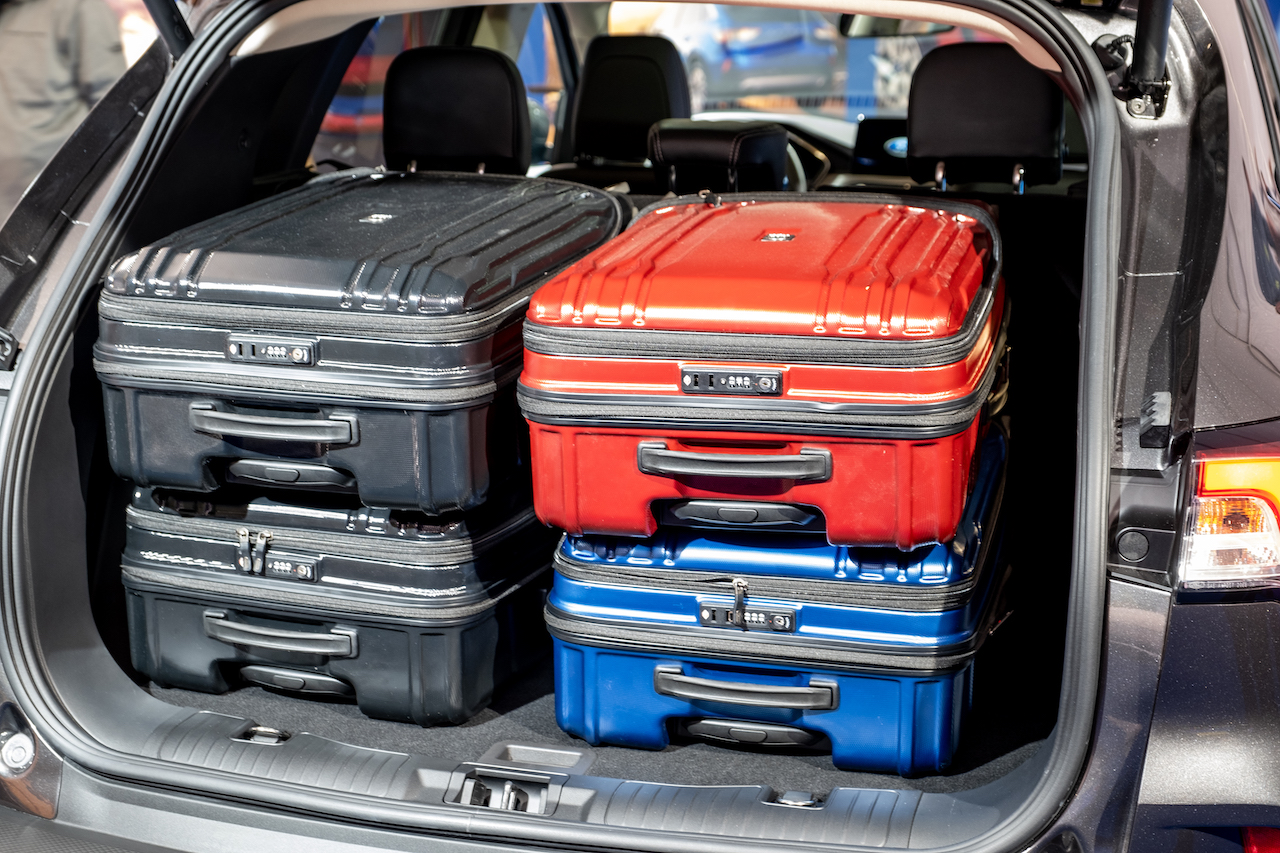 The new Escape looks to be a solid entry into this very crowded segment. Having owned a 2005  Escape and spending time in the outgoing model, this is a large step forward. How does it stack up to the class leaders like the CX-5, Volkswagen Tiguan, or Hyundai Tucson? On the surface, it’s right there. The real answer will come when I or another member of the Hooniverse team have the opportunity to drive it.

For now, we will wait and see. 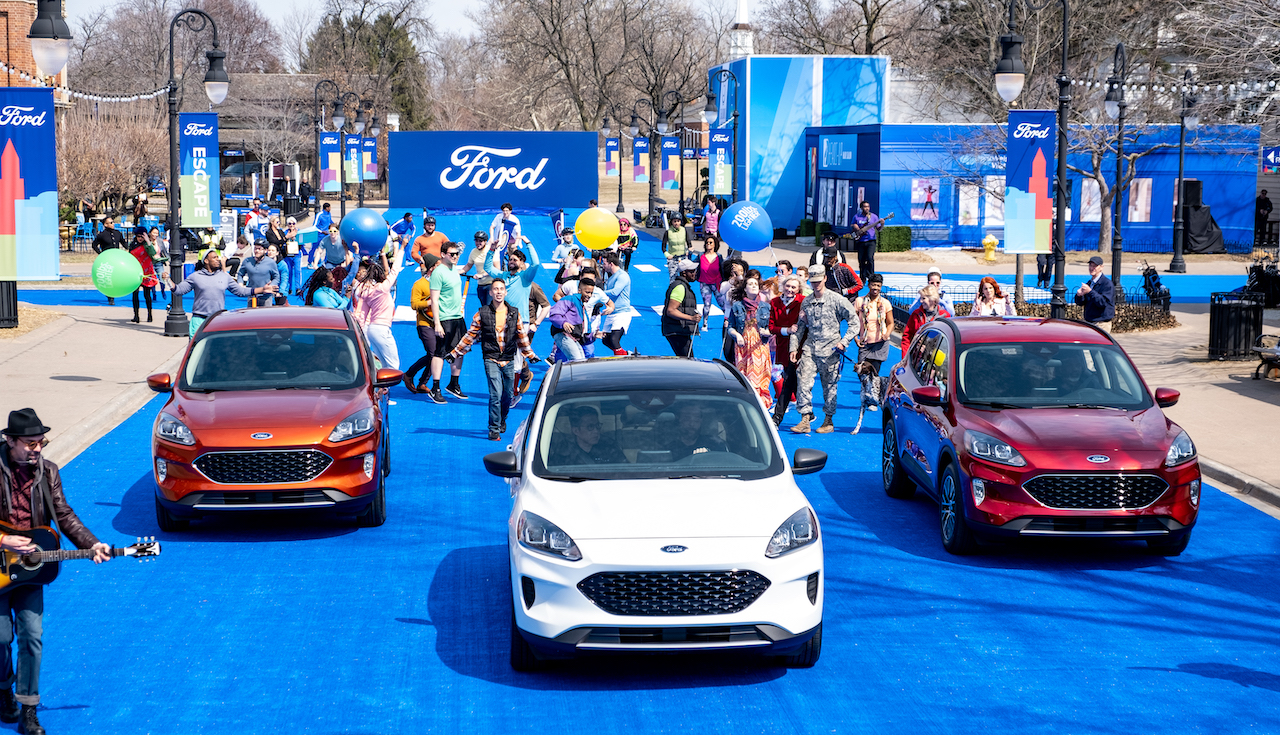 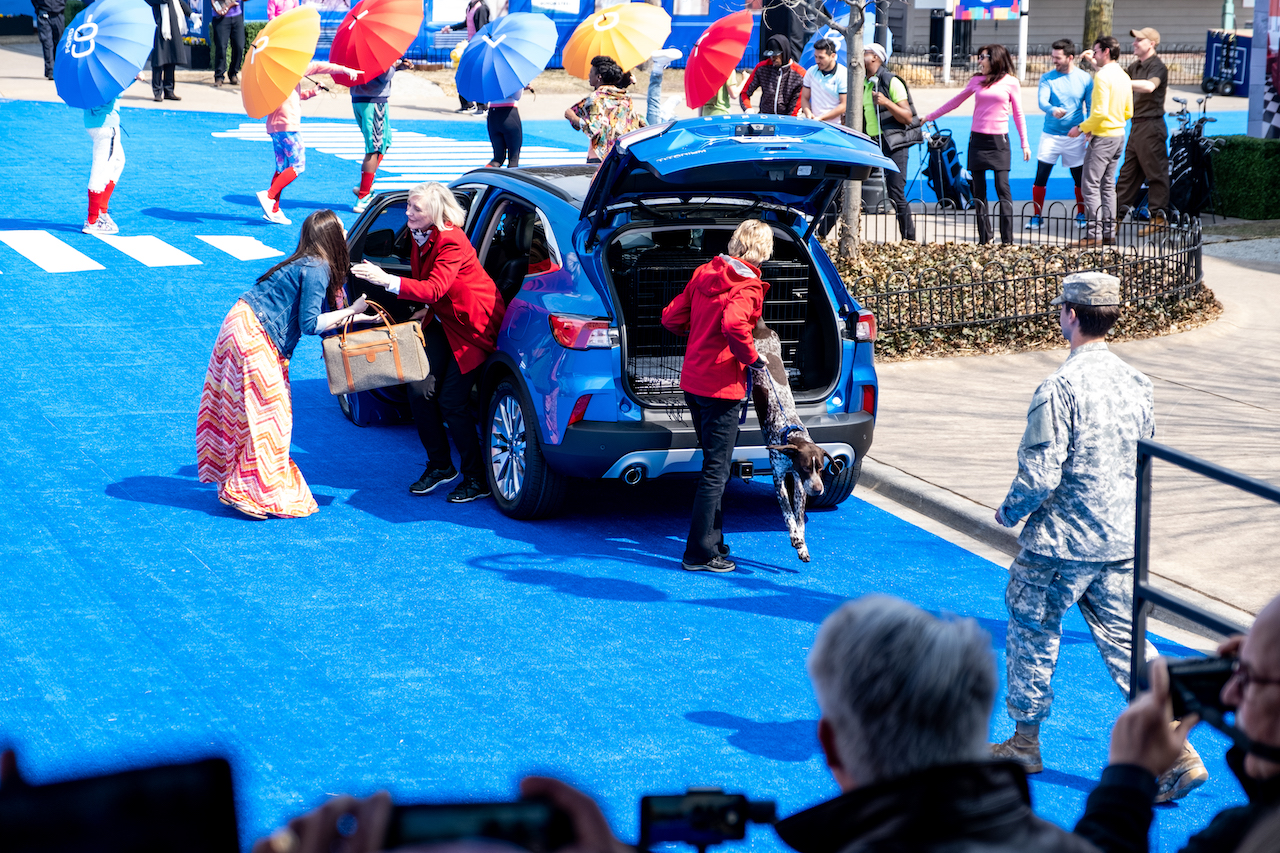