Welcome to the Hooniverse News! As always, this is a weekly recap of the biggest stories in the automotive industry without the fluff or bull. This week: Maserati MC20 is the MC12 successor that’s ready for racing, Genesis unveils breathtaking G70 redesign, Nissan will show off next-gen Z prototype next week and confirms a manual, Lucid Air is inching closer to production, McLaren is selling its iconic HQ to help stay afloat, and your news for the week. 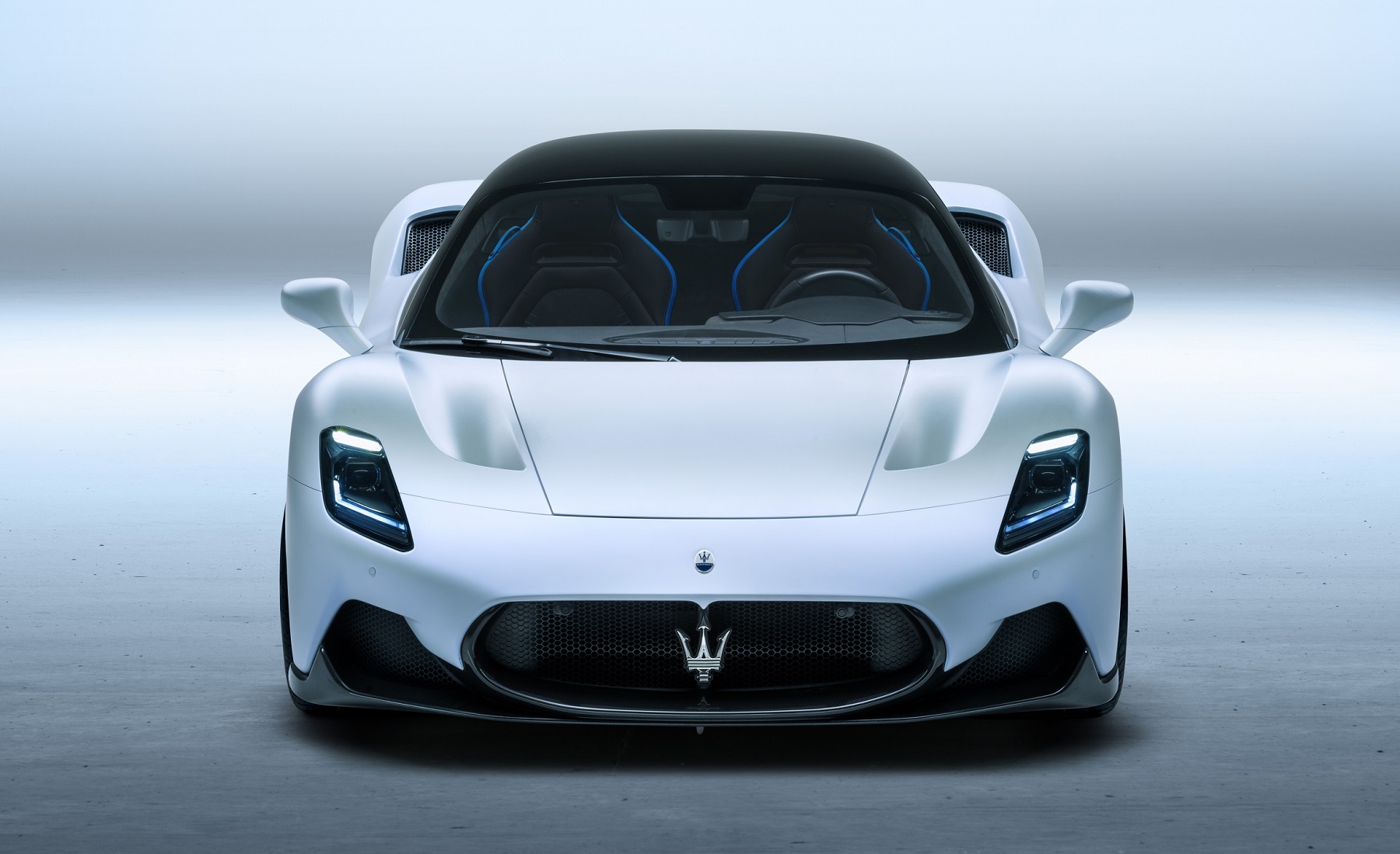 A new Maserati supercar is something I don’t think has ever happened since I started covering the industry ten years ago, so this will be cool. The Maserati MC20, the successor to the legendary Enzo-based MC12, was finally revealed this week after much teasing. It’s significant in a few ways besides just being the first supercar of theirs since 2005. It represents the beginning of a new era for Maserati, and what better way to do that than with a halo car. 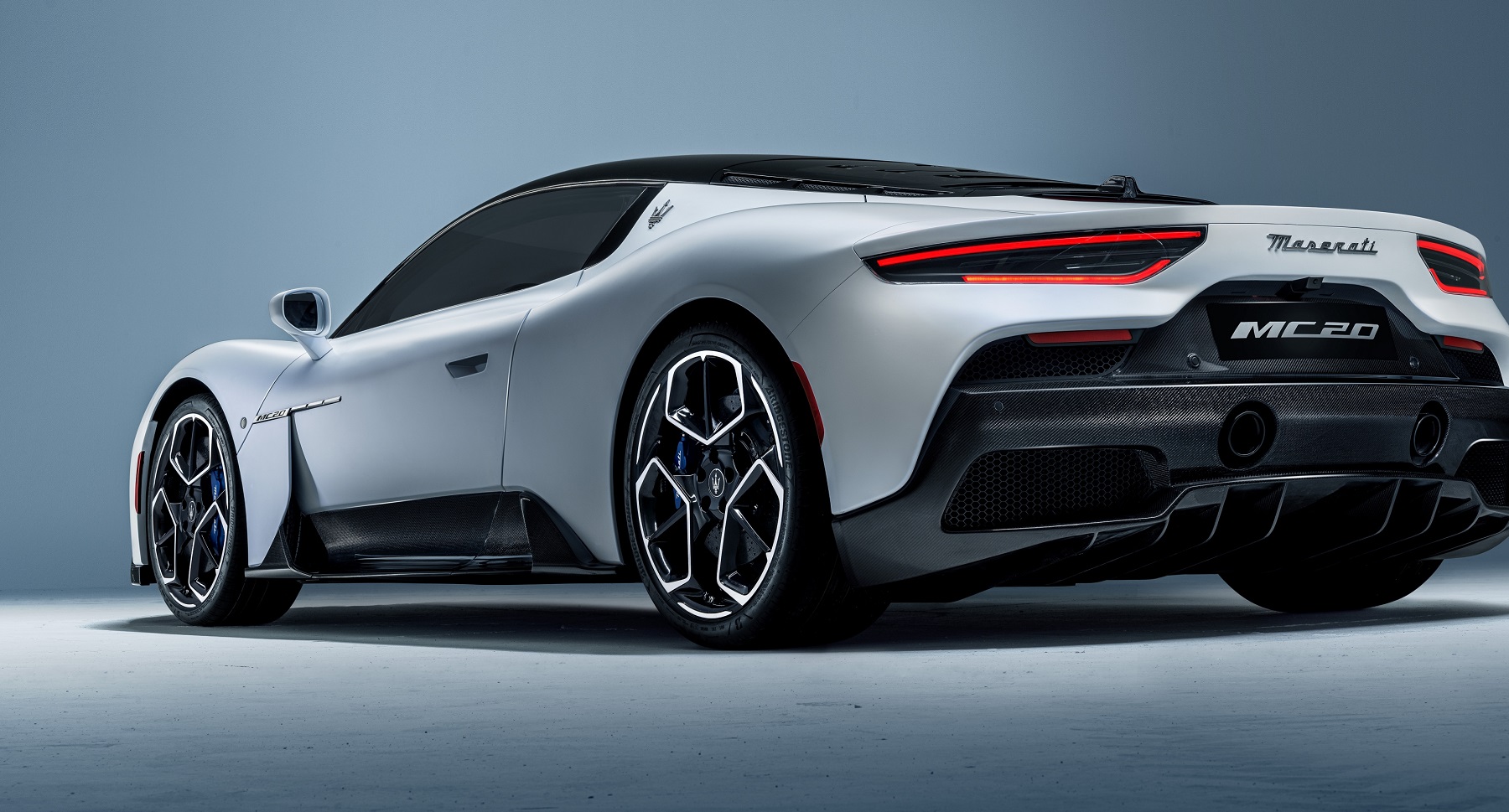 The MC20’s design draws some inspiration from the MC12 and Maserati’s racing history. The whole car is built with racing DNA and signals the brand’s intention to return to racing. Over the course of its creation, a process which took 24 months, over 2,000 hours were logged in a Dallara wind tunnel to perfect the aerodynamics. After more than a thousand computational fluid dynamics simulations, they came up with a design that not only looks gorgeous but doesn’t need any “mobile appendages” (active aero) to work at speed. 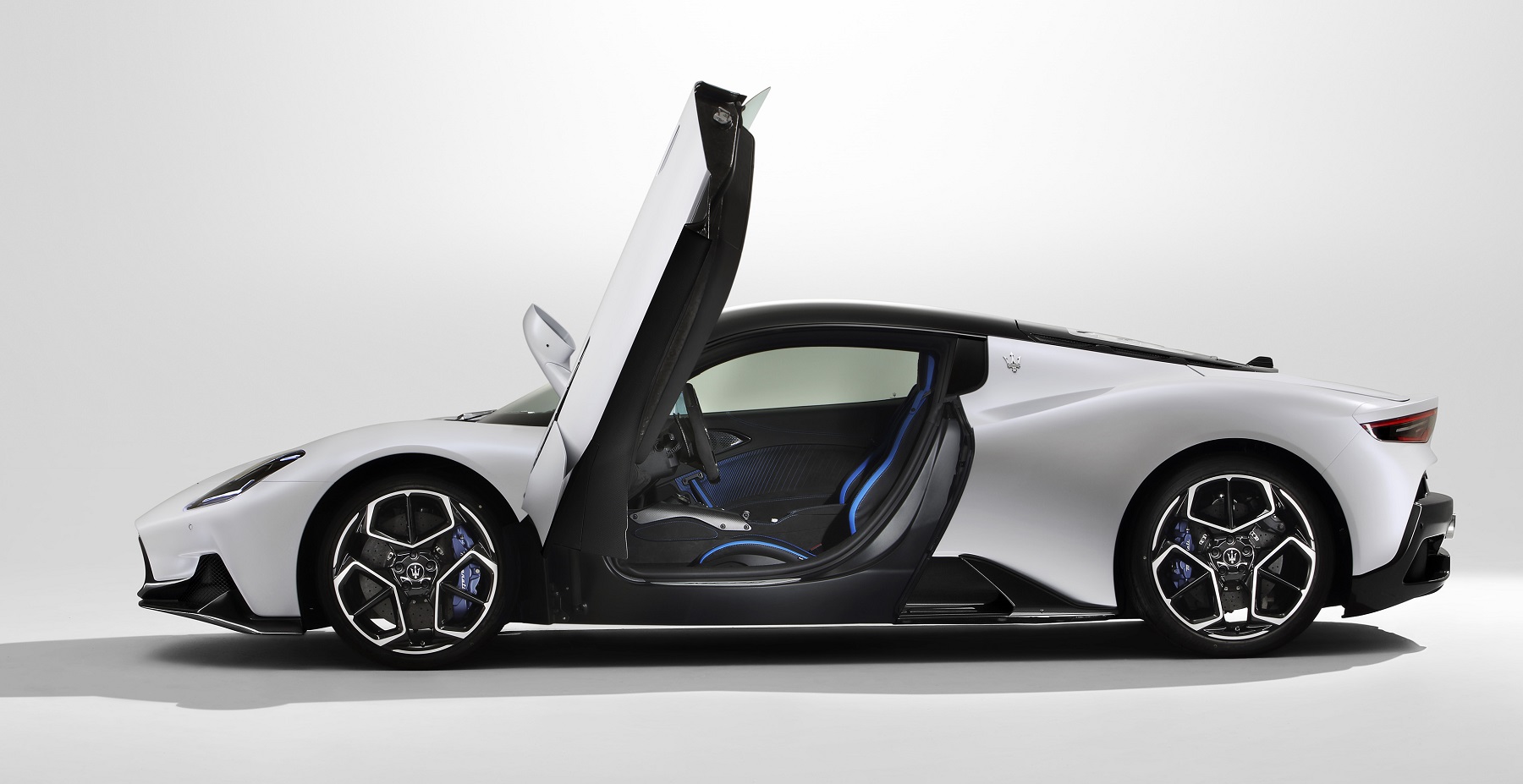 Power comes from a 3.0-liter twin-turbocharged V6, Maserati’s first totally in-house engine design in over 20 years. It uses twin side turbos with electronic actuated waste gates, dry sump oil system, and “Maserati Twin Combustion” (MTC) Twin Spark with passive prechamber to produce 621 horsepower and 538 ft.-lbs. of torque. That’s the same power output as the MC12’s Ferrari-sourced V12 with half the displacement and cylinders and a lot more torque. Power is sent to the rear wheels through an eight-speed DCT and a mechanical LSD (with an electronic LSD as an option). Maserati says the MC20 is designed to enable full electric power as well which will be offered in the future. 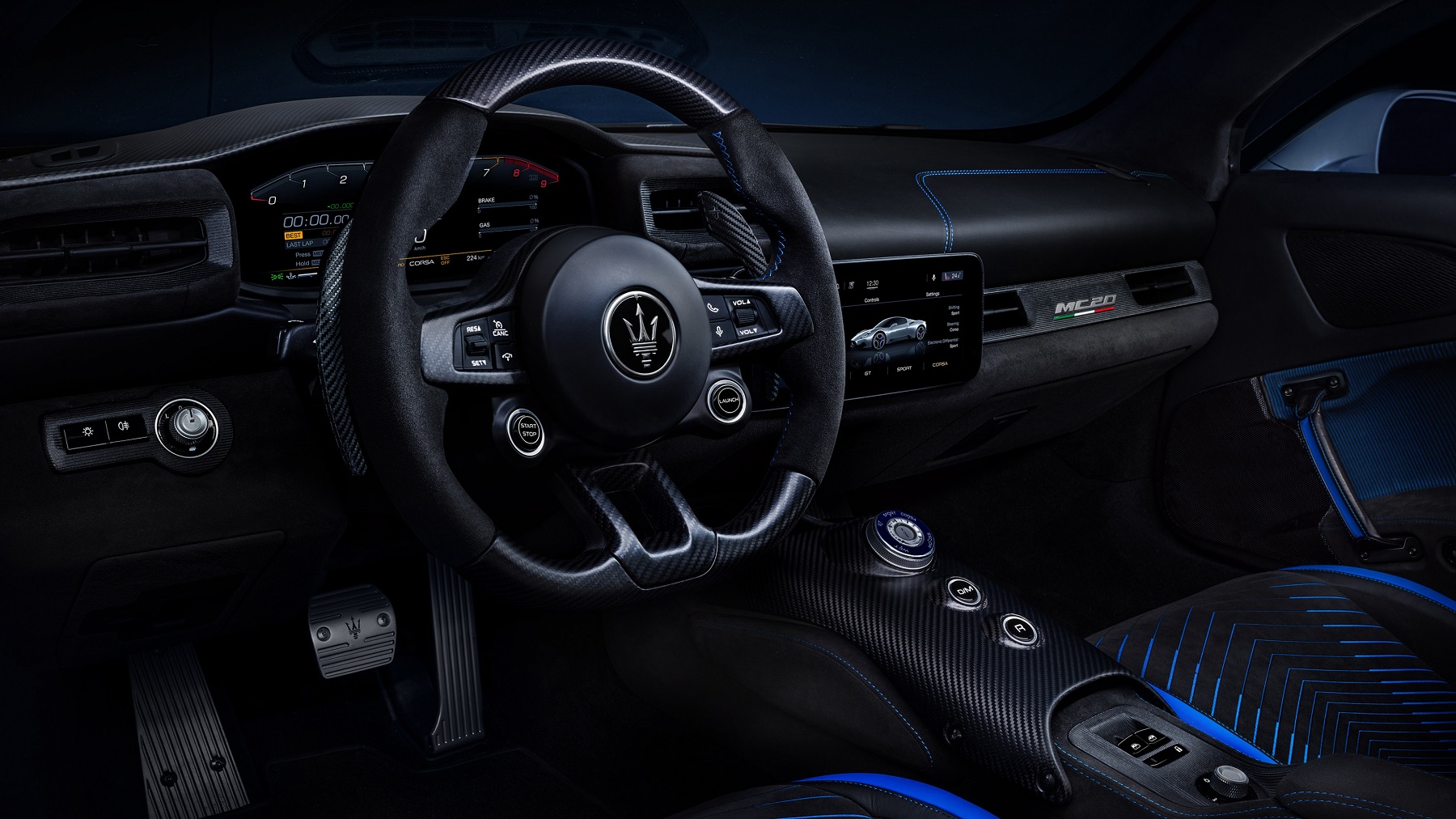 The body and the chassis it’s mounted to is also fairly light with the whole thing weighing 3,300 pounds. Carbon fiber was used to its potential but in a way that doesn’t sacrifice comfort. The car rides on a full double wishbone setup and 20″ wheels. Brembo provides the stopping power with six piston front and 4 piston rear calipers and ventilated discs up to 14.96″ in size. It promises to be a well rounded and very capable track car should owners choose to exploit its abilities. If not, Maserati hints more than once that they’ll be returning to motorsport. Most recently the Gran Turismo was competing in various GT4 series around the world, but I believe its finally been retired after a very long service. I think the MC20 would make for a fine GT3 car.

Bottom line, it’s good to talk about a new Maserati with a heart in racing again. There’s a lot of significant steps taken with this car and it shows Maserati is ready to venture into the next decade with a whole new outlook and put the Ghibli behind them (that part may be a lie). But don’t worry, the Maserati we know and love will always be with us as shown by this screen shot taken directly from their media site. 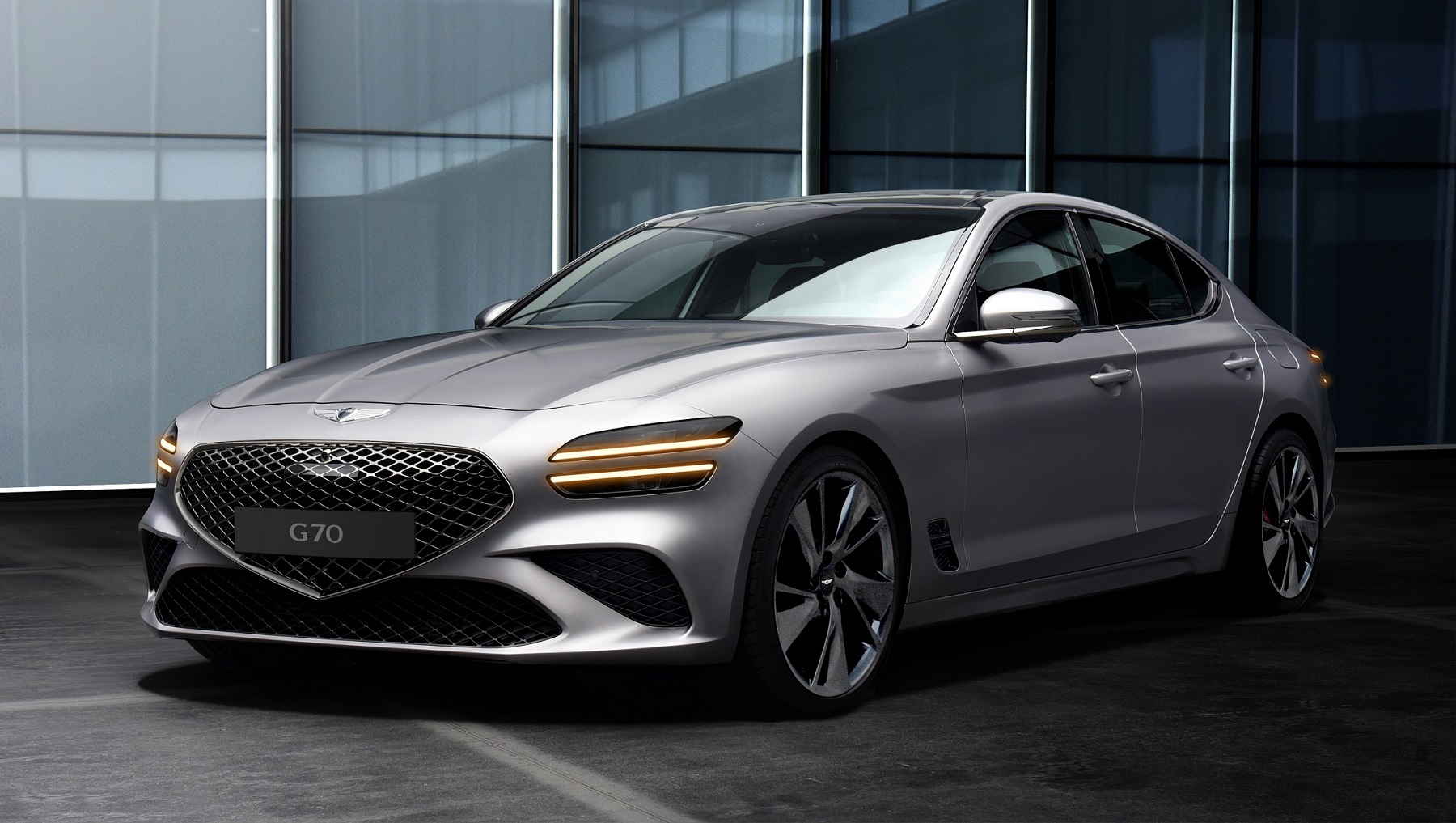 Maserati weren’t the only ones dropping gorgeous stuff in the middle of the week. Genesis, the luxury sub brand of Hyundai, debuted the all-new G70. They were light on technical details in the press release but I suspect that was for a very good reason – they only want us talking about its looks. They could have announced a hybrid V12 with a gated manual shifter and the design still would have been the biggest talking point here.

This new design language of theirs has proven to be wonderful on everything they’ve put it on. It started with the G90, matured a bit with the GV80 and G80, and is simply breathtaking on the G70 now. The new family face includes the new signature crest grille, which is positioned lower than on other cars, and the defining Quad Lamps. With the “sensuous” surface around the front wheels and the long hood, it looks like a true sports sedan. If the current G70 and the Kia Stinger it’s built on is anything to go by, it’ll have performance to back that up. The profile is cab rearward and shows functional side air extractors which show it isn’t just about looking pretty.

The back of the car looks most familiar to the current G70 but it still gets that new Quad Light treatment here as well. They’re angled slightly upwards to mimic the soaring wings of the Genesis logo. Additionally, the rear decklid spoiler is a little more pronounced, the license plate frame is moved lower, and body-colored diffusers wrap around the exhaust. 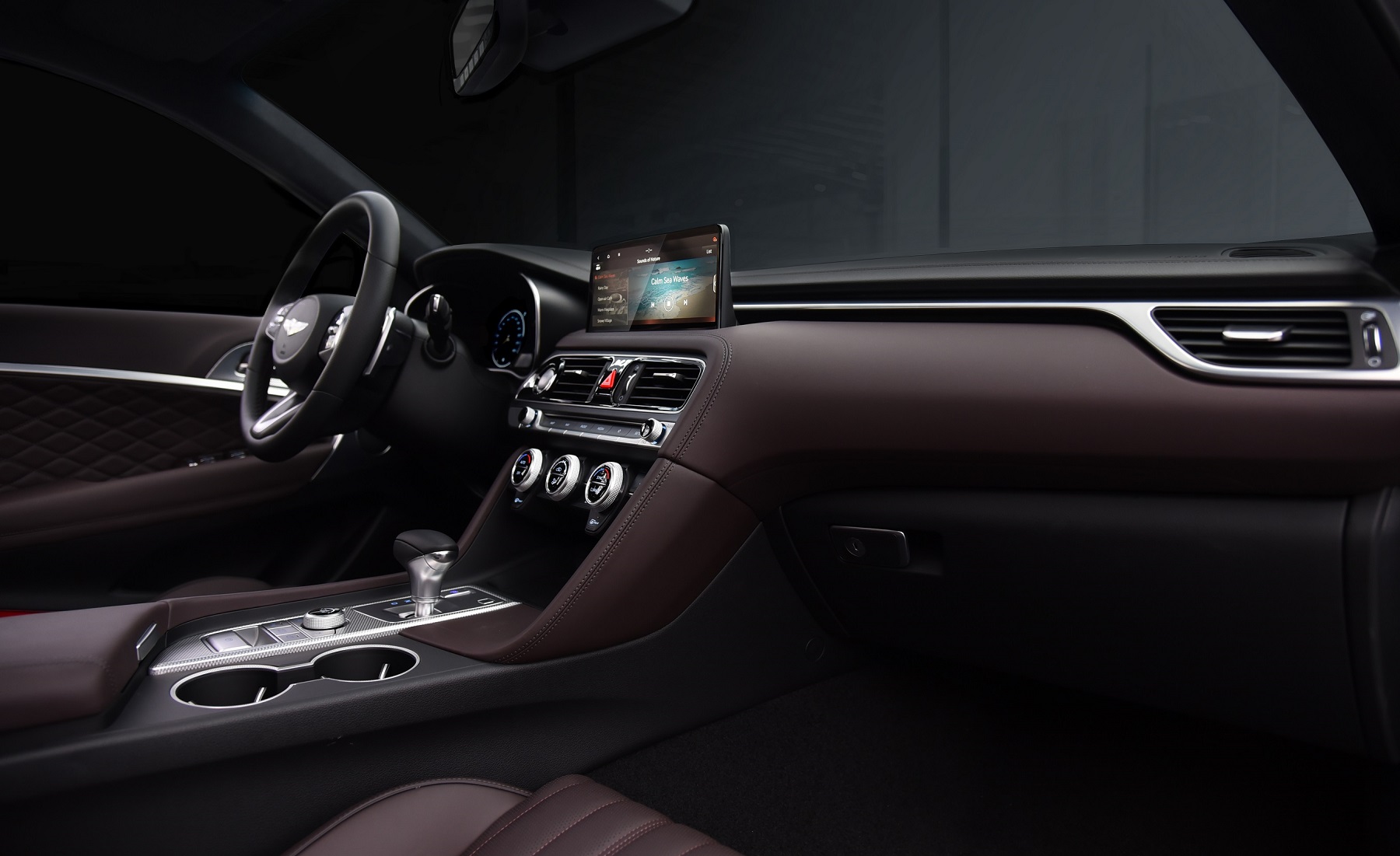 Genesis also reworked the interior quite a bit with typical buzzwords like “driver-centered” and “fighter jet cockpit”. But despite the cliches, it’s a beautiful and no nonsense design. And it looks fantastic in burgundy. The user experience is enhanced with a new 10.25″ infotainment screen with a new Genesis UI with updates via wifi and features like Valet Mode and CarPlay (no mention of Android Auto, but this is a rather short press release).

We’ll know more about the stunning G70 next month when they reveal more specifications. So far though it’s another win for Genesis.

Nissan has been ramping up the hype train for the upcoming “Nissan Z Proto”, which is going to be a concept version of the upcoming Z sports car. How much of a prototype it is and how close it’ll be to production remains to be seen, but we’ll know more on September 15th at 8:30 PM Eastern. In the meantime, they released a teaser video to get us all talking. It shows one very important thing. It shows a manual.

The video also briefly shows off the engine sound but it’s just a startup and quick rev while music plays over most of it. From what I can tell though, it’s still got six cylinders. The engine we’re all expecting to see here is the 3.0-liter twin-turbocharged V6 from the Infiniti Red Sport line. Internet enthusiasts who pretend to only buy cars with manuals were scared because Infiniti offers no manual transmissions. Last year though, Nissan showed off a 370Z with that same engine and a manual transmission. They were proving it works while dropping us a hint. Of course, the engine choice is really just a best guess at this point. We’ll know for sure in a few days. 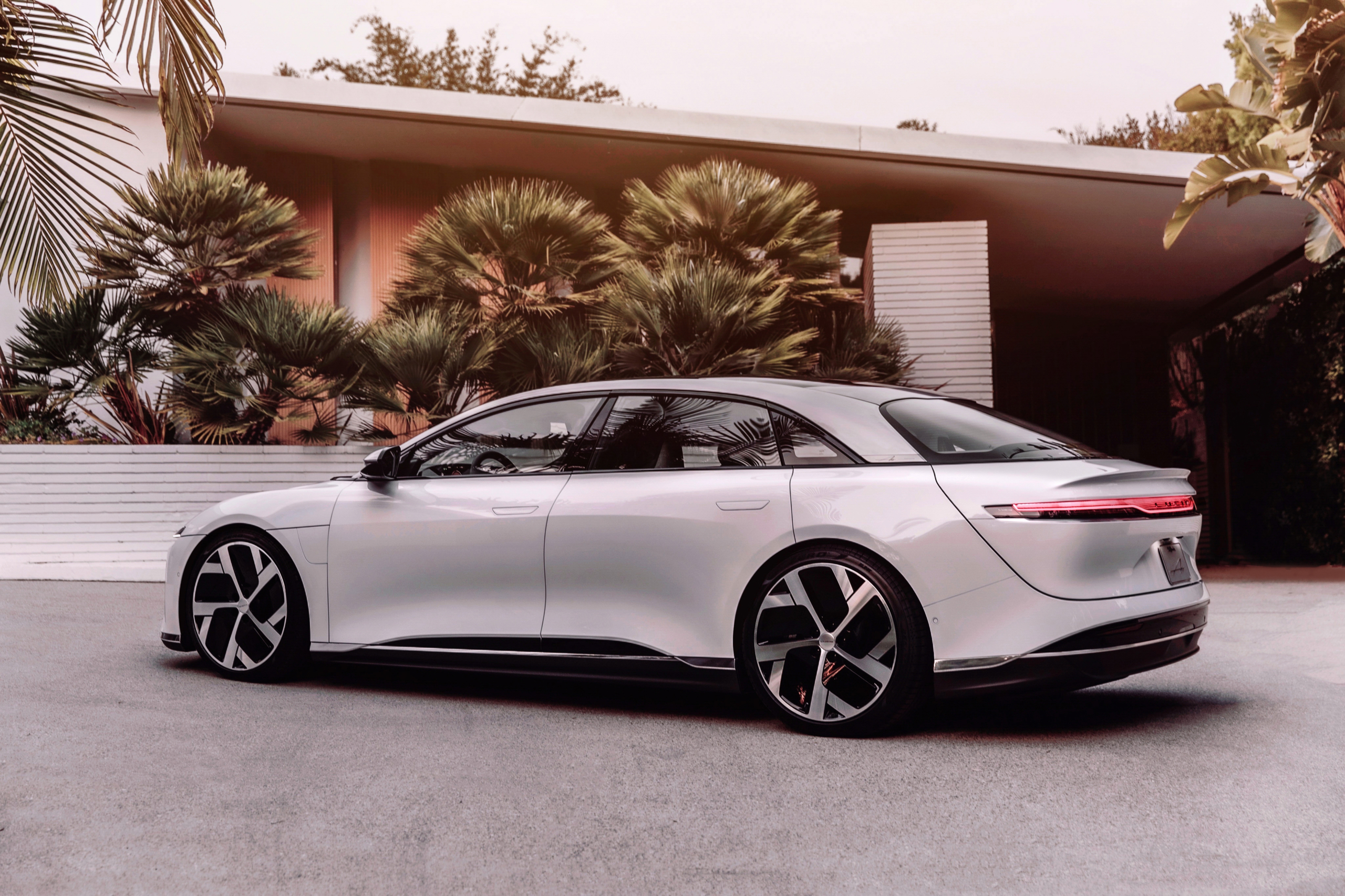 Here’s a car I’ve been trying to follow over the years but have had trouble for some reason. The Lucid Air, the first production-intent car from EV startup Lucid Motors, has been in the news a lot since its initial debut. Each time it comes back in the news, I seem to have a hard time understanding what’s new about it that week and where it is in its journey from concept to production. All the articles were basically just repeating the same thing I had already heard. I declined to cover most of those because, well, there’s no point in repeating promises from a startup over and over. Well, this week it came back in the news and it seems that it is indeed still a thing that is being built.

Our buddy Bradley Brownell at Jalopnik (their site redesign looks okay – there I said it) got a chance to spend some time at their R&D facility to learn more about the company and the car. It’s the deepest dive into the car I’ve seen yet. Lucid shows some very promising tech while highlighting their plans to roll it out next Summer. What we still don’t see though is proof of their incredible claims – 1,080 horsepower, 200+ mph top speed,  9.9-second quarter mile, and over 500 miles of range. But with the access that Bradley was given, it seems they just might be able to pull it off after all. I suggest reading his thoughts over on Jalopnik if you, like me, feel like you don’t know what to believe regarding the Lucid Air. 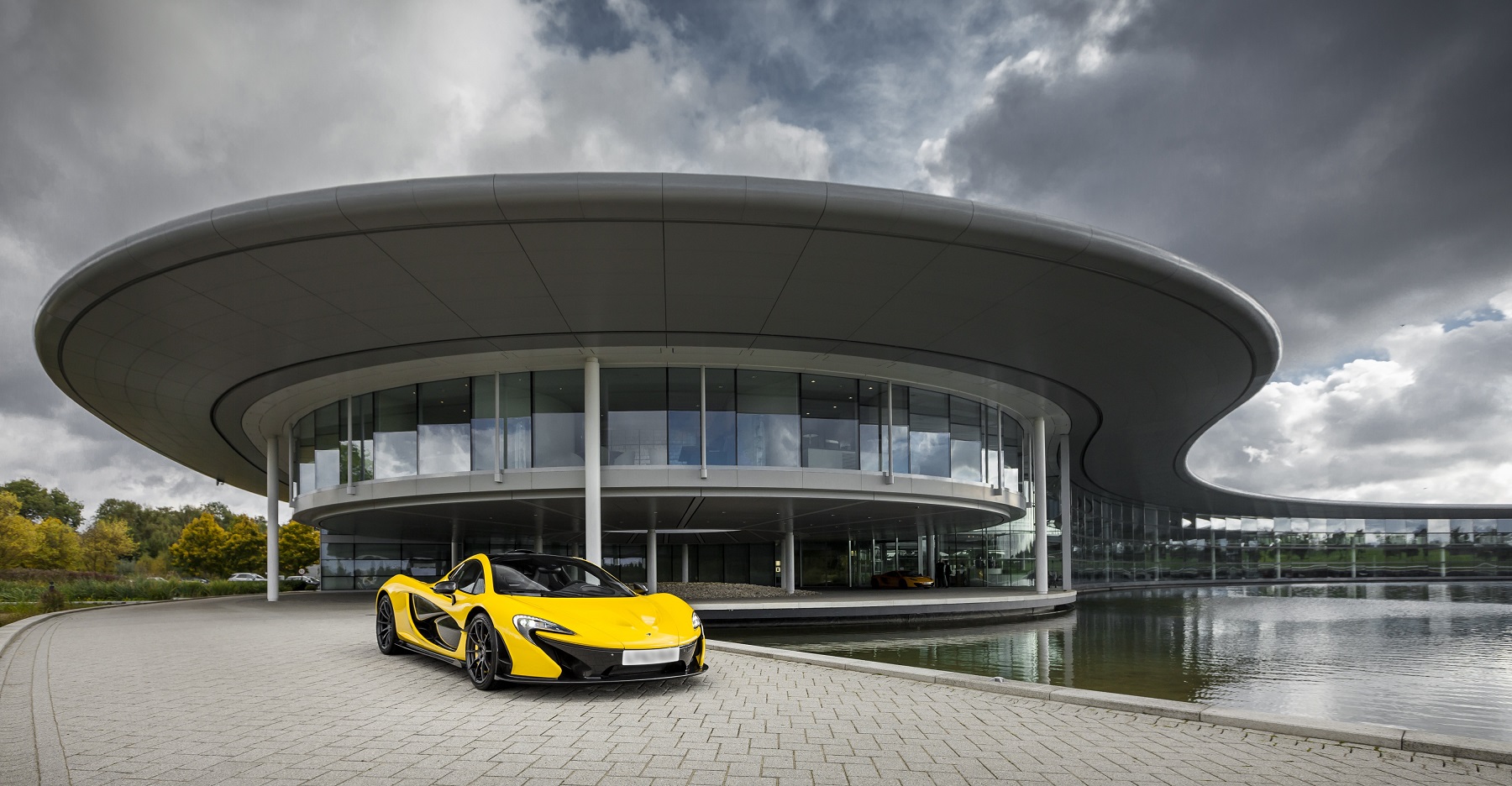 McLaren is among many automakers struggling with the economic hardships caused by COVID-19, but their relatively small size as a low volume manufacturer is making it a little harder. As part of a restructuring plan to stay afloat, McLaren is attempting to sell their iconic McLaren Technology Centre. It’s the gorgeous building that’s been the backdrop of many a press shot but is also home to a significant portion of their engineering and design team as well as a racecar collection and a wind tunnel. Here’s the breakdown on the terms of the sale provided by a McLaren spokesperson to City A.M.

“The potential sale and leaseback of our global headquarters and the appointment of banks to advise us on a debt restructuring and equity raise are part of the comprehensive refinancing strategy that we announced earlier this year.

“Building on the shorter-term measures that we put in place over the summer, these initiatives will deliver a stronger balance sheet and ensure that McLaren Group has a sustainable platform for long-term growth and investment.

“The proposed sale and leaseback mirrors best practice among leading companies and will have no impact on our day-to-day operations.

“The McLaren Campus, comprising the McLaren Technology Centre, McLaren Production Centre and the McLaren Thought Leadership Centre, is an iconic, world-class facility that will remain our home in the future.”

I went to college to do computer stuff so all this business talk makes no sense, but Jalopnik points out that McLaren will be able to stay in the building as long as they pay rent, but they will effectively lose ownership over the building. Sad times indeed, but losing ownership of a building is a better alternative to losing a whole company, especially one like McLaren.

[Source: City AM via Jalopnik]