Welcome to the Hooniverse News! As always, this is a weekly recap of the biggest stories in the automotive industry without the fluff or bull. This week, BMW shows off the M8 Gran Coupe and it actually looks good, Toyota stuns with next-gen Mirai hydrogen fuel cell vehicle, Chevrolet ruins a good thing with the 2021 Colorado ZR2, and Chevrolet talks engine specs for the C8.R, plus your news for the week. 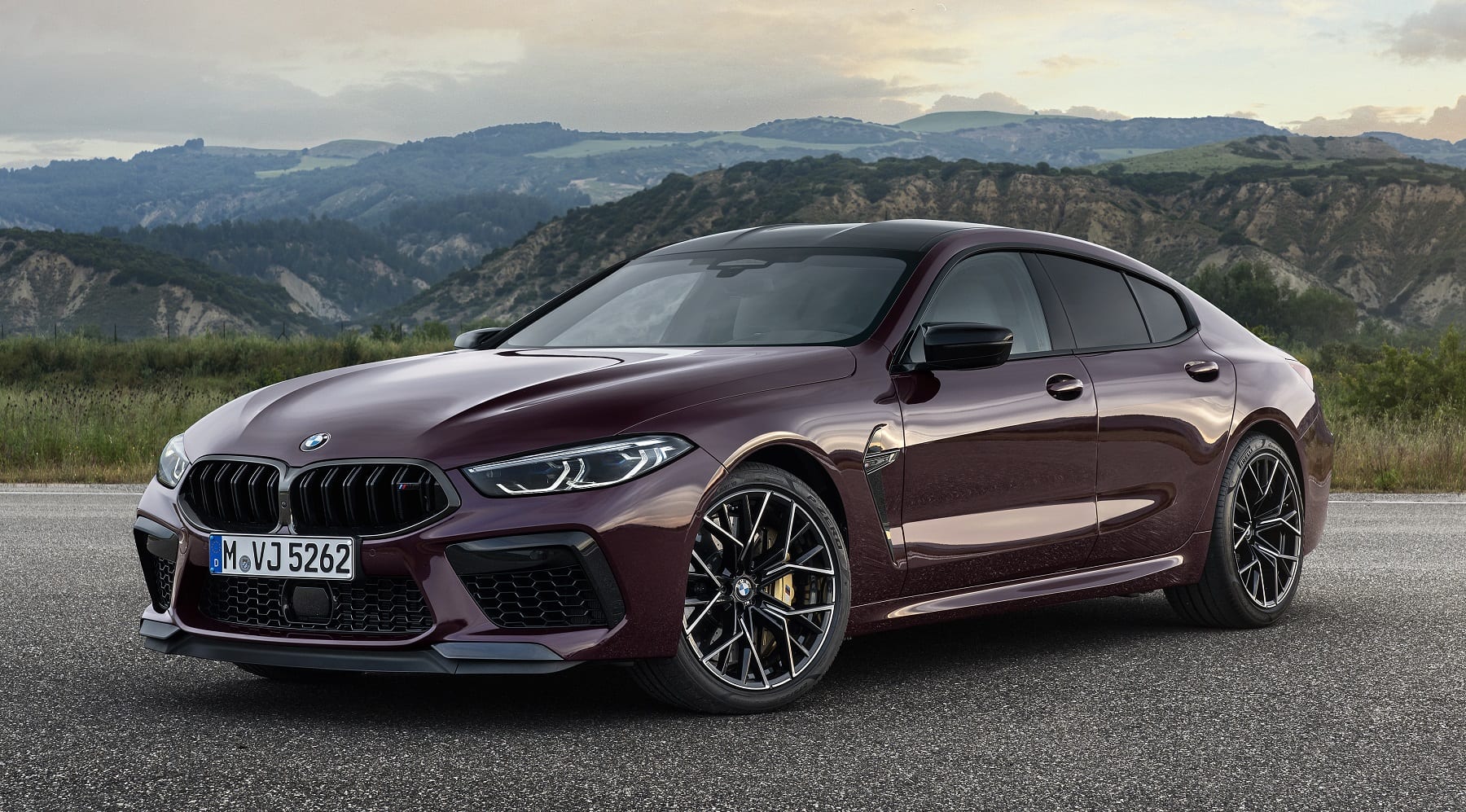 BMW’s lineup has become so easy to predict, but sometimes an inevitability can turn out pretty good. We all knew that a four-door Gran Coupe version of the M8 was practically guaranteed, especially after the more civilian version was revealed. What we all didn’t know was that it would actually look… good? I guess BMW is still capable of surprising us after all.

The BMW M8 Gran Coupe is a sedan version of BMW’s flagship that still retains all of the performance capabilities of the standard M8. There’s even a Competition version. It shares all the hardware with the M8 and sports the same attractive styling at both ends, it’s just that there’s more stuff in between. The M8 Gran Coupe rides on a chassis and body which is 9.1-inches longer, 1.4-inches wider, 2.3-inches taller and with an increased 7.9-inch wheelbase over the M8 Coupe. That adds extra stability, comfort, and interior space without affecting the car’s track abilities in any noticeable way. There’s an extra 185 pounds to carry around but that’s a small task for the hardware underneath.

The Gran Coupe gets to play with the potent 4.4 liter S63 M TwinPower Turbo V8 (a true twin turbo with a hot V setup) that’s used in most of the bigger M cars now. Standard output is 600 horsepower and 554 lb.-ft. of torque, but opt for the Competition package and that’s increased to 617 horsepower. BMW’s M-specific xDrive all-wheel-drive system (the one that can go RWD) and a ZF-based eight-speed automatic transmission handle the rest. Despite the aforementioned weight increase, its 0-60 mph time of 3.0 seconds is in line with the M8 Coupe Competition. 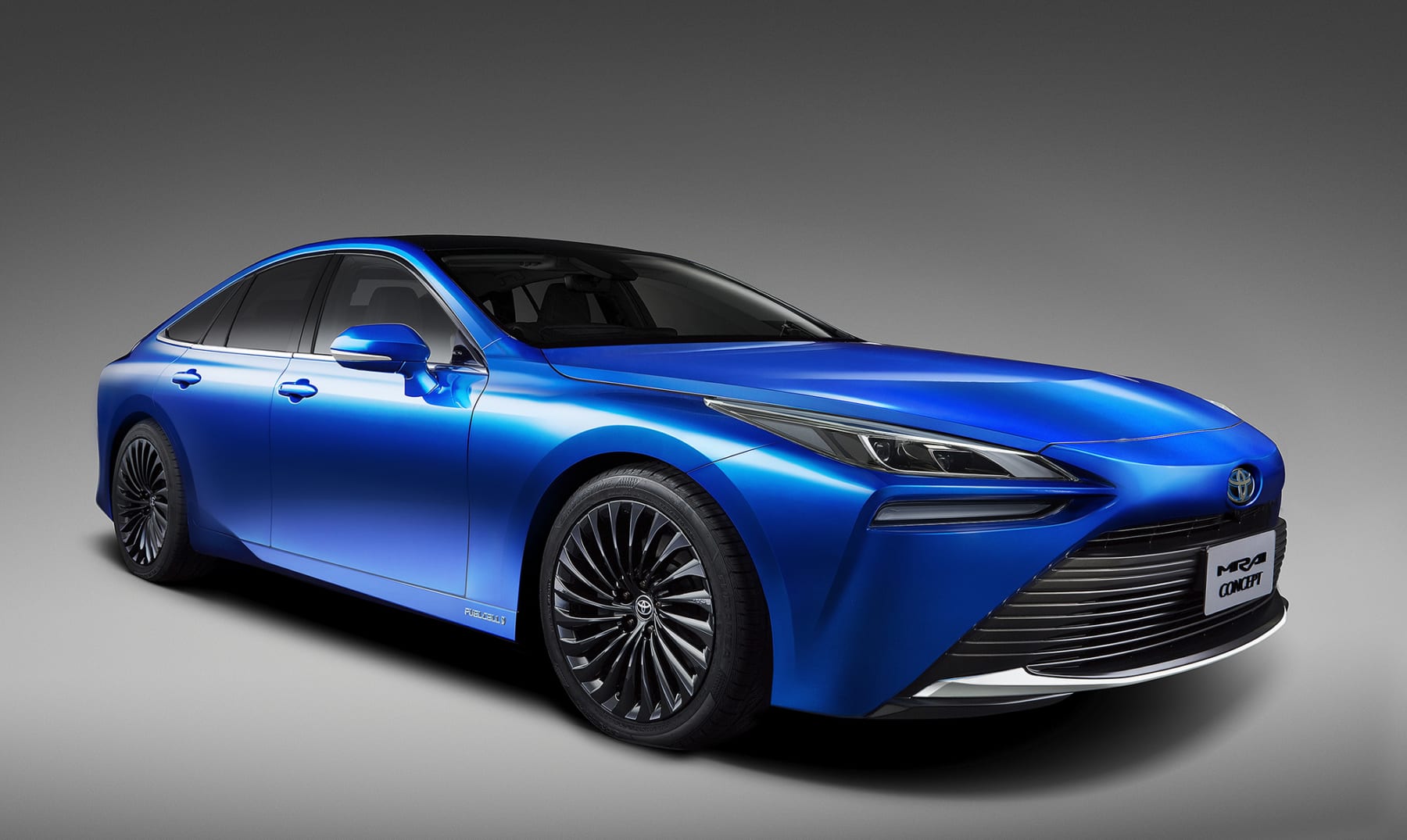 The surprises keep on coming. Remember the Toyota Mirai? It was the first production hydrogen fuel-cell electric vehicle on the market here in America. It was groundbreaking, very efficient, and very ugly. It was the car everyone made fun of back in school. Well, look at her now.

It’s a concept for the time being, but is almost certainly what the Mirai will look like next year as a 2021 model. It brings enhanced driving range and performance, a premium RWD platform, new safety and tech, and a design that doesn’t look like a Prius watched too much anime. By running a driveshaft to the back, it’s allowed Toyota a bit more freedom in their design of the Mirai. The body is lower, longer, wider, more rigid, and more aerodynamic as a result. A positive side effect is that there’s also more room inside. 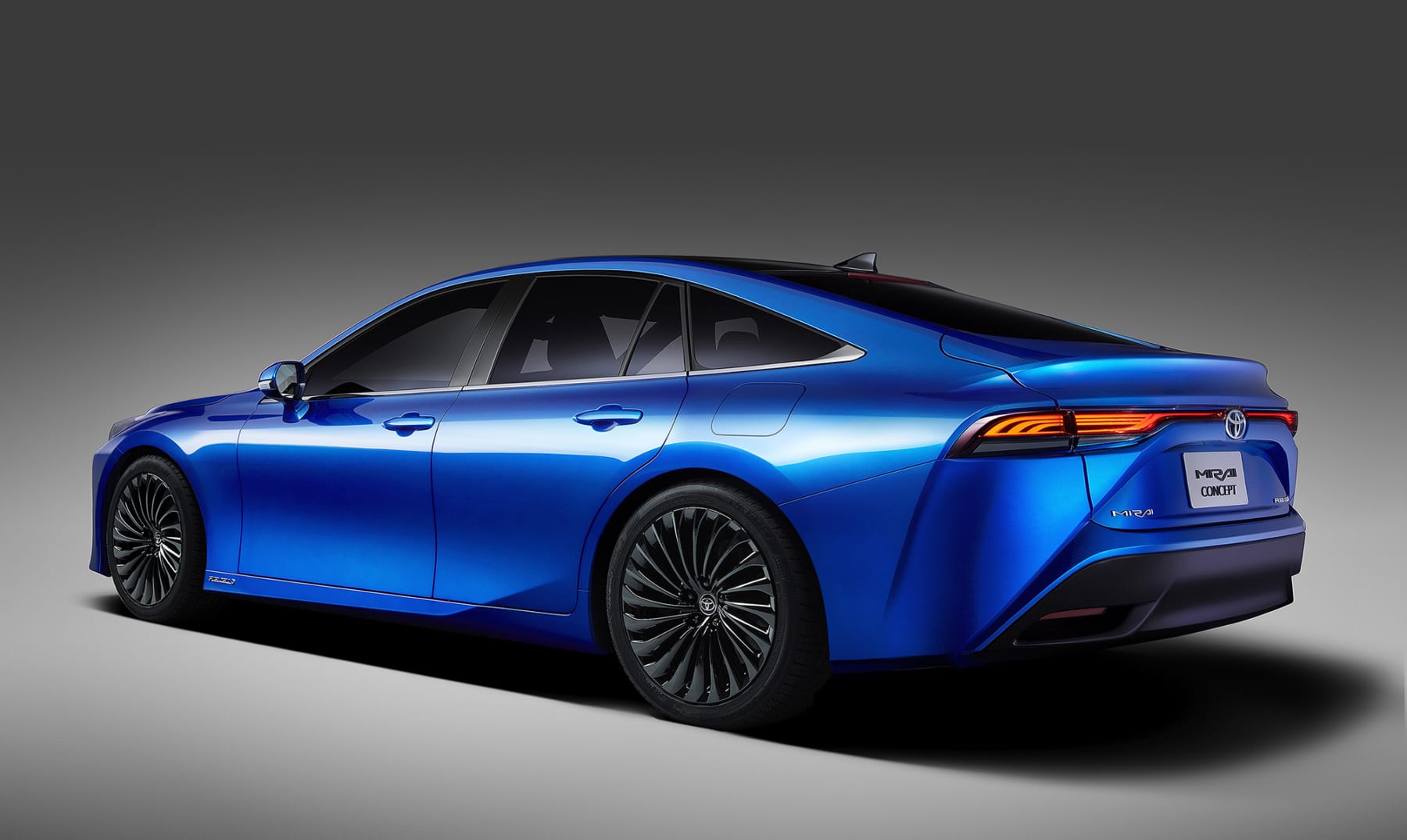 Toyota is still committed to hydrogen fuel cells and have worked to increase performance and range on the new Mirai. A targeted 30% increase in range is achieved by better fuel cell system performance and increased hydrogen storage capacity. They also say the power delivery is greater, more engaging, and even quieter than before. As the infrastructure for hydrogen continues to expand, Toyota hopes to prove its worth by developing more fuel-cell electric vehicles over the next few years. They also hinted at the scalability of the technology, which means it could power anything from a phone to a building. It’s currently powering a test fleet of Kenworth class-8 semi trucks that are pulling freight through the Ports of Long Beach and Los Angeles, so they’re definitely thinking more than just passenger vehicles with this tech. 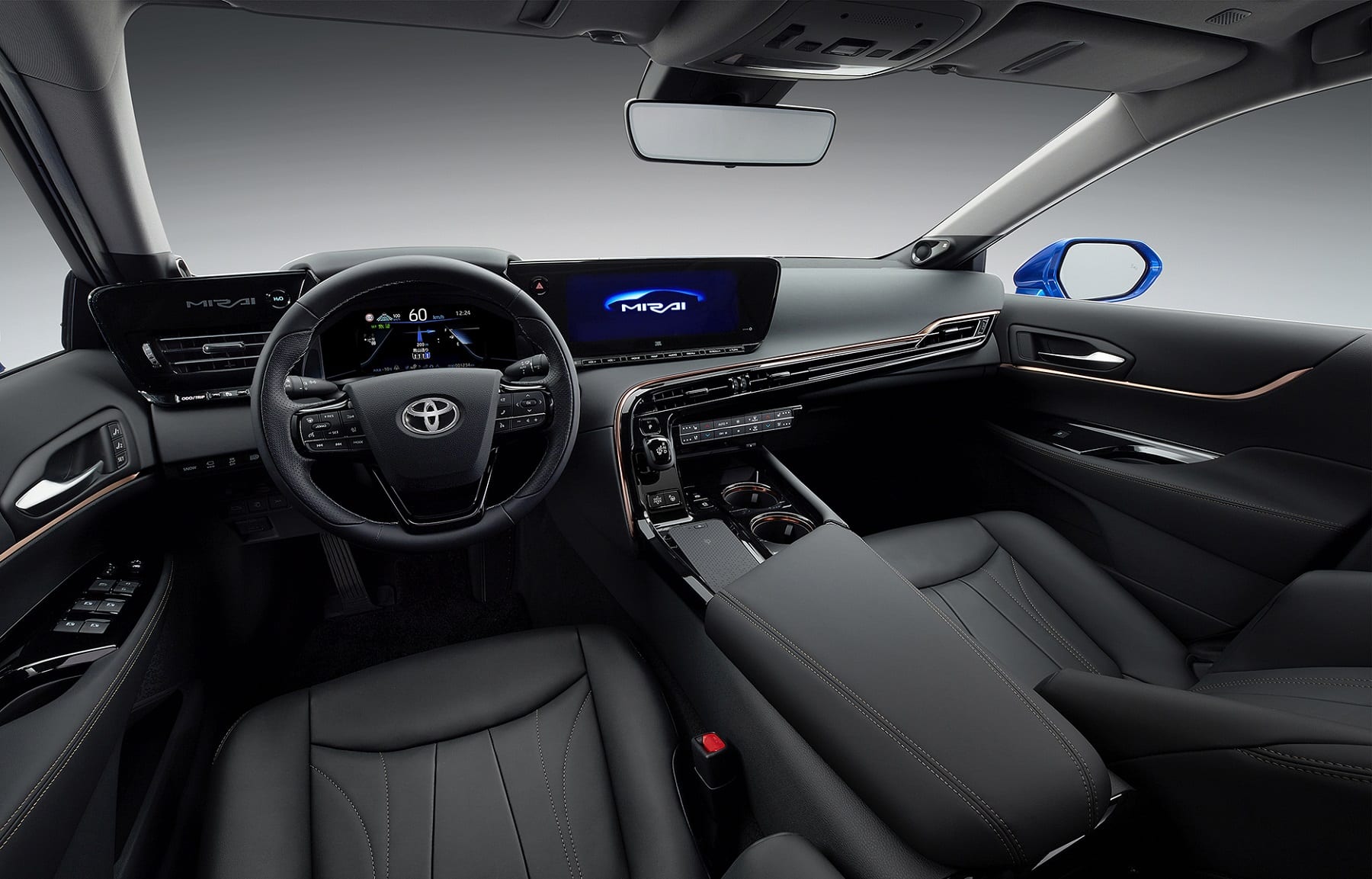 The second-generation Toyota Mirai should be on sale late 2020. California and Hawaii are confirmed markets but they will soon be expanding into the northeast and other areas. 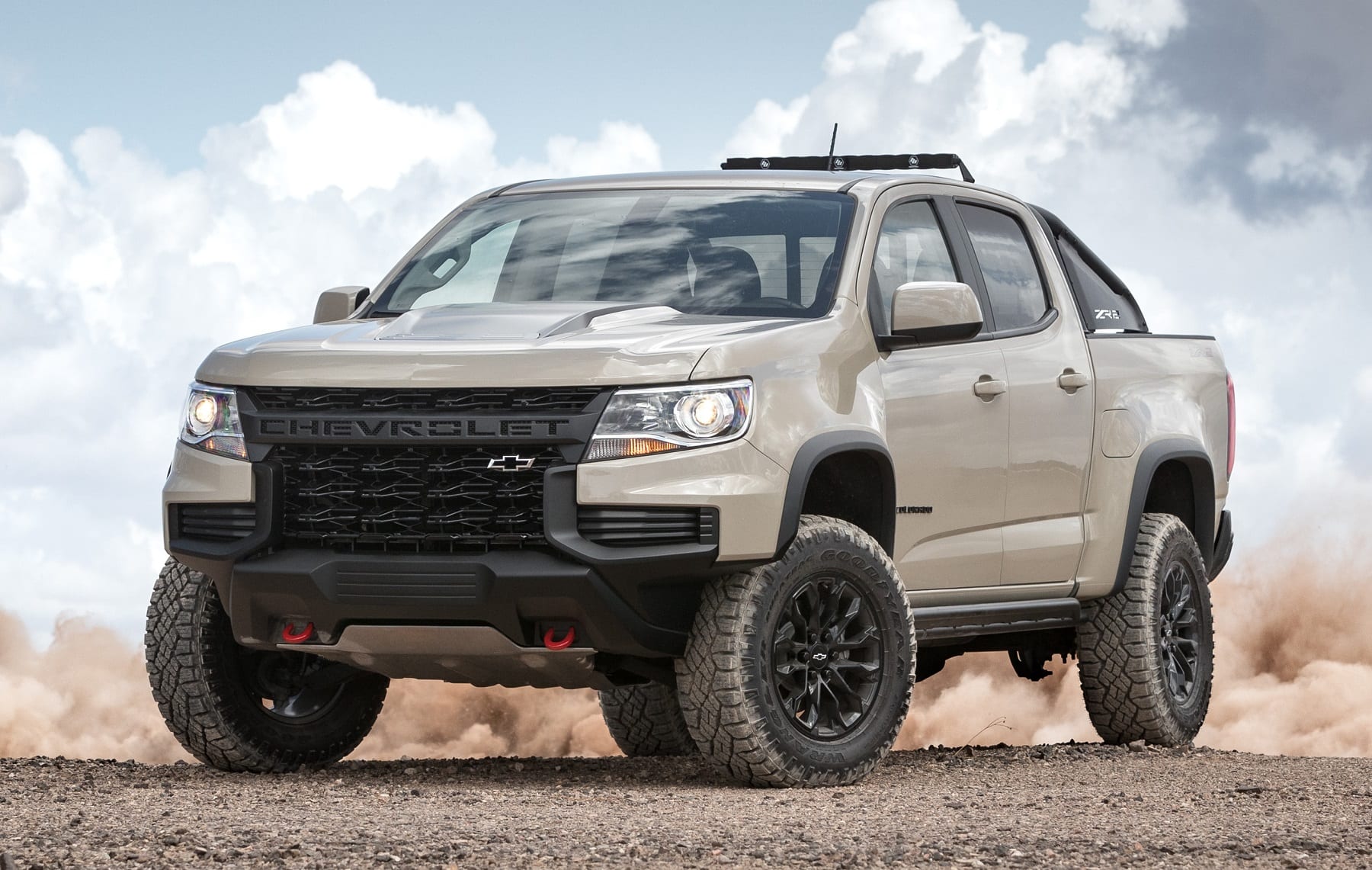 Chevrolet seems to be taking a page from Lexus and just going apeshit on their grilles. They confirmed that some updates are coming to the Colorado lineup and teased it with the ZR2. Expect a few new features, paint options (like this Sand Dune Metallic), and whatever it is they’ve chosen to do with this grille.

It has Camaro-esque flares on the edges of the grille (which worked so well last time) that appear to have been an afterthought. And it seems designers couldn’t decide on whether to type out “Chevrolet” on the cross bar or just leave the bowtie alone, so they just did both. But because the bowtie couldn’t block out the lettering, they just put the bowtie off to the side. Finally, the lower half of the grille decided it wasn’t gonna talk to the upper half anymore and did its own thing. Where the top half tapers inward, the lower half is just squared off. But it’s okay it has those little flares on the edges now. The current Colorado is a fine looking truck and the ZR2 is especially wonderful. But this… look GM, we love you. Please stop making ugly shit.

The 2021 Colorado debuts at SEMA this year. As if you needed another reason to skip it. 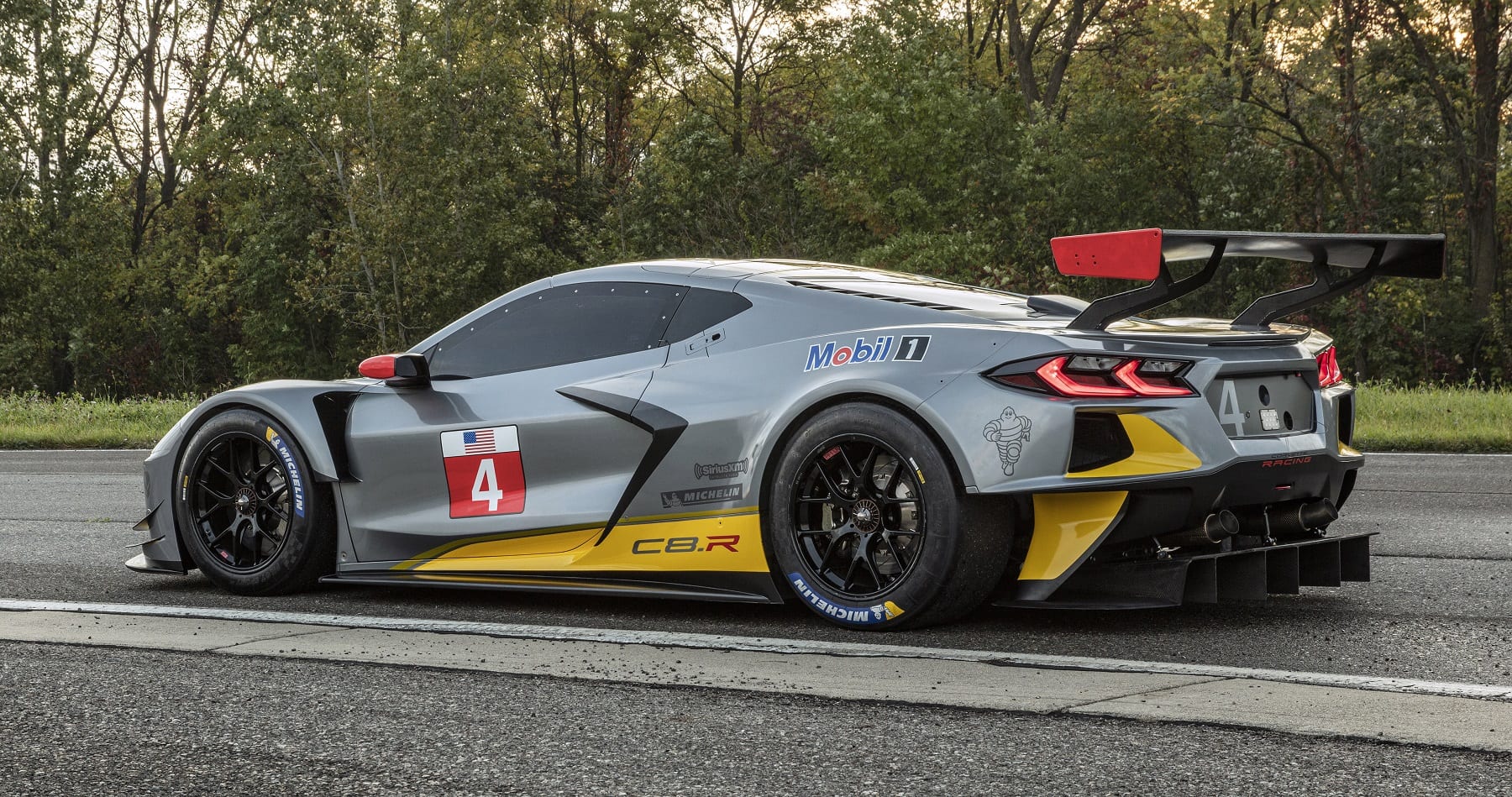 Now for a GM product that isn’t ugly even though I still think the road version kind of is, the C8.R. It’s being shown at Petit Le Mans this weekend (I saw it!) and Chevrolet is finally talking some specs.

Powering their first clean sheet race car design since the C5.R will be a 5.5-liter naturally-aspirated V8 producing 500 horsepower and 480 lb.-ft. of torque in compliance with IMSA GTLM regulations. Our old pal Bozi also confirmed on Jalopnik that it’s a dual overhead cam setup with a flat-plane crankshaft. Because racing engines in that class have to be production based with a minimum amount sold to the public, take that as confirmation that the same is coming to a Corvette road car soon. Power is transmitted to the rear wheels through a new compact Xtrack six-speed sequential gearbox that was designed to allow for a larger rear diffuser.

You’ll get to see it run for the first time in public if you’re at Petit Le Mans this weekend. Its competition debut is next January at the Rolex 24 at Daytona.