Welcome to the Hooniverse News! As always, this is a weekly recap of the biggest stories in the automotive industry without the fluff or bull. This week: Acura stuns with the new TLX and TLX Type S, BMW updates the 5 Series with new styling and a mild hybrid system, Ford confirms existence of Mustang Mach 1 and it’s coming this year, Nissan teases upcoming Z and it’s still a sports car, plus your automotive news for the week 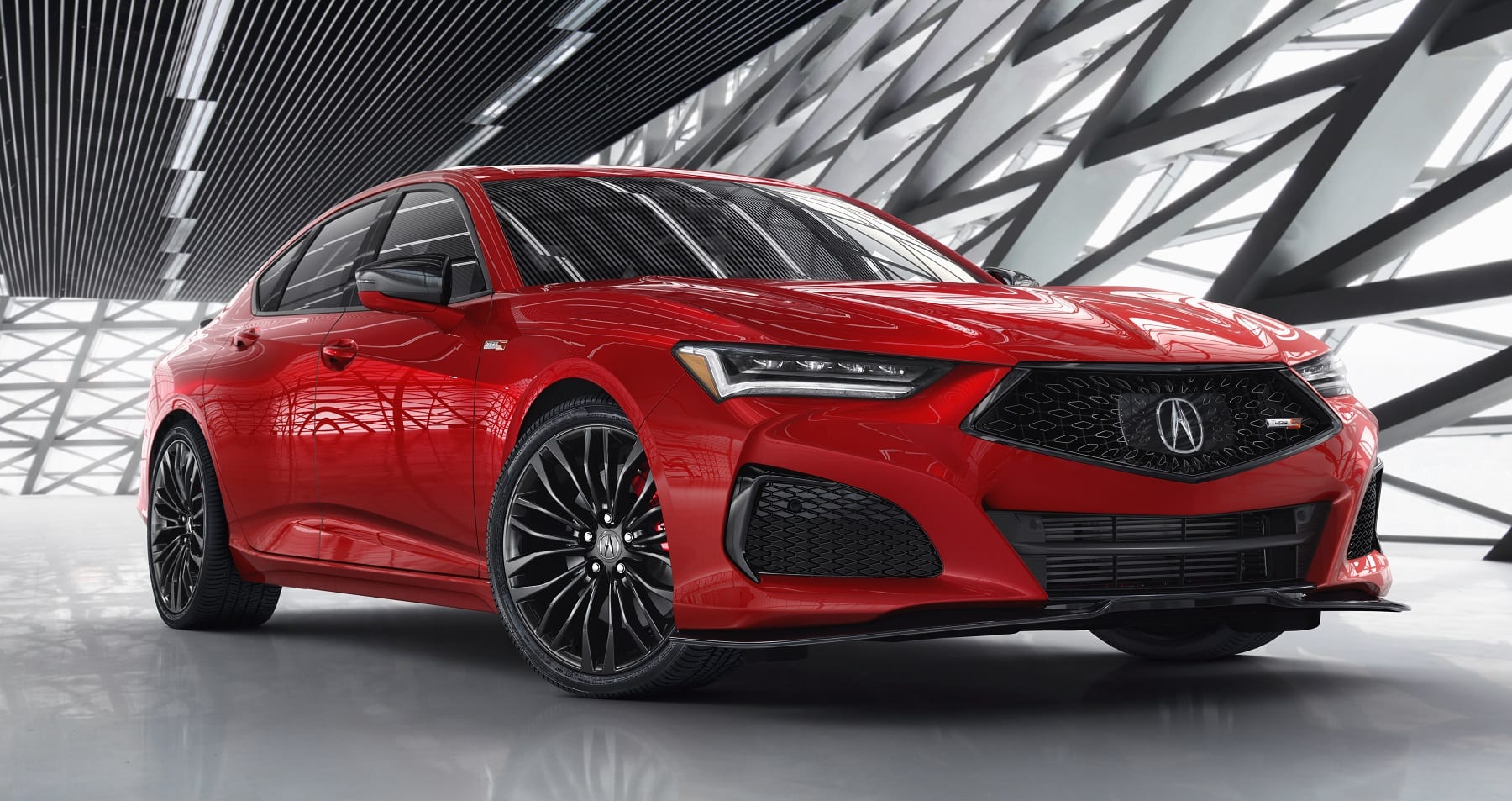 There was a brief moment this week where our corner of the internet was able to forget about the bullshit for a moment and come together to appreciate something. That something was the long-awaited byproduct of a stunning concept Acura revealed last year. It’s the all-new Acura TLX and TLX Type-S, and as pretty much all of the internet car community could agree on, it’s stunning. There are more important things in the world than cars, but it was a welcomed break from reality to see a beloved brand knock one out of the park again. Here’s everything we know about it so far.

The 2021 Acura TLX will arrive exactly as you see here next Spring. It’s a faithful evolution of the Type S Concept that was a major hit when it was revealed at Pebble Beach last August. The proportions and silhouette are nearly identical and do the whole “four door sports coupe” thing better than most cars that actually call themselves that. It has a low and wide stance, long dash-to-axle ratio, a long hood, tapered greenhouse, and pronounced rear haunches. 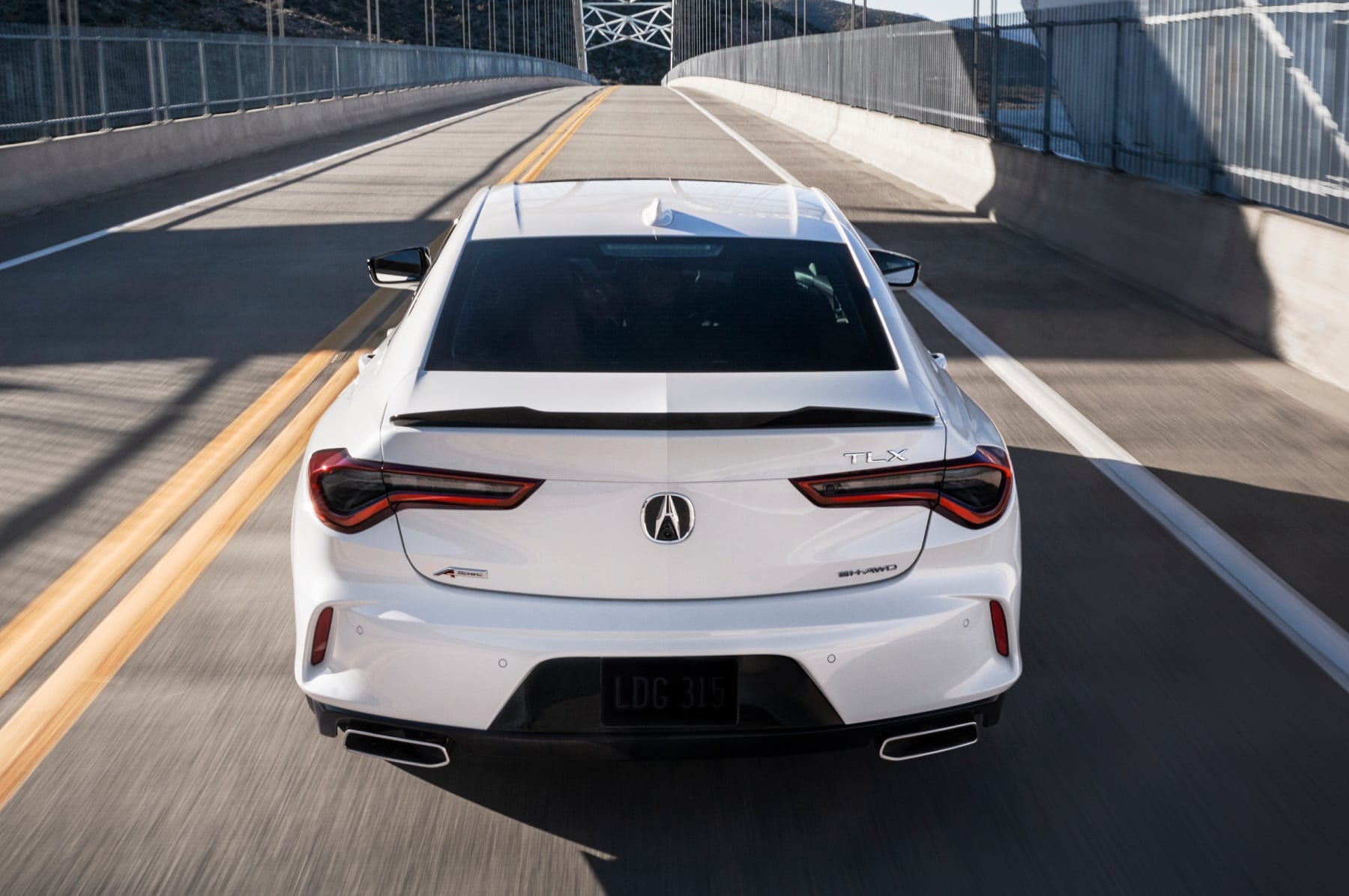 Beauty isn’t limited to just the surface either. The TLX is a sports sedan at its core with a new dedicated Acura sedan platform serving as the starting point. Dedicated platforms aren’t very common in mainstream sedans anymore and this one is designed for TLX Type S-levels of performance (more on that later). This chassis incorporates double-wishbone front suspension, variable-ratio steering, electro-servo brake-by-wire technology taken from the NSX, and adaptive dampers. Going even deeper than that, the core structure incorporates the use of lightweight materials such as aluminum and press-hardened steel to reduce weight but also increase rigidity. It’s the most rigid body structure ever offered on an Acura besides the NSX. Weight and balance are then optimized by an extensive use of aluminum in the body and in other structural pieces. 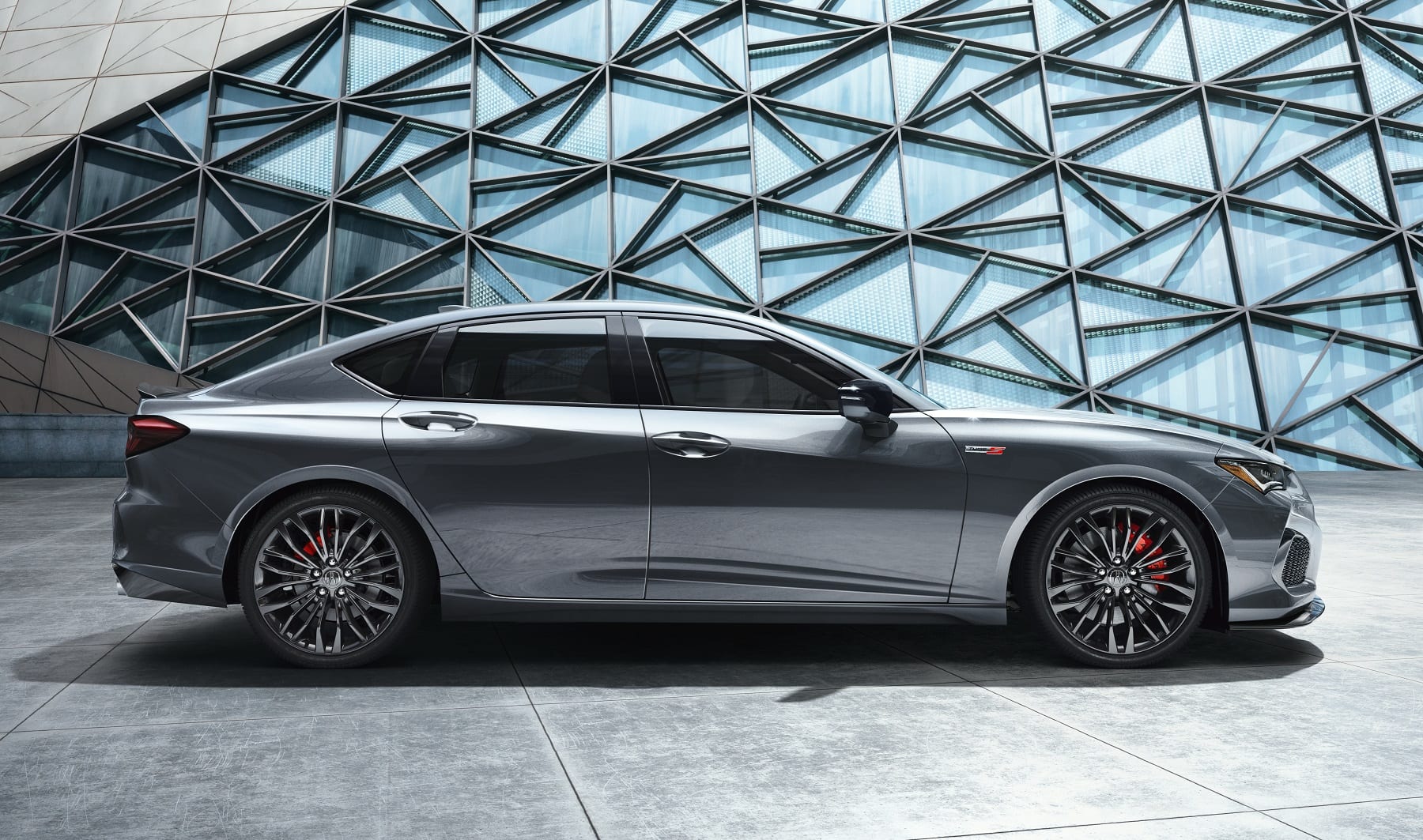 Now for more of the good stuff, the TLX and TLX Type S are both offered with some capable hardware. The standard TLX is powered by a 2.0-liter DOHC, direct-injected, VTEC, turbocharged four-cylinder engine with 272 horsepower and 280 lb.-ft. of torque. It’s paired with Acura’s ten-speed automatic and it sends power to the front wheels in standard form. Their brilliant “Super Handling-AWD” system, which I can say works exceptionally well from the passenger seat of an NSX, is optional on the base model.

The car you and I are probably most interested in though is the Type S. It’s taken this long for it to return so Acura is doing it properly. This one receives an all-new 3.0-liter, DOHC, direct-injected, and turbocharged V6. It’s transverse-mounted, highly compact and lightweight, and utilizes a dual scroll turbocharger and electronic wastegate for immediate, high torque response. It’s been developed by many of the same engineers who worked on the NSX so expect it to be wonderful – sadly we’ll have to wait a bit for power figures to be released though. It’s paired with the same 10-speed automatic and the SH-AWD system is standard. 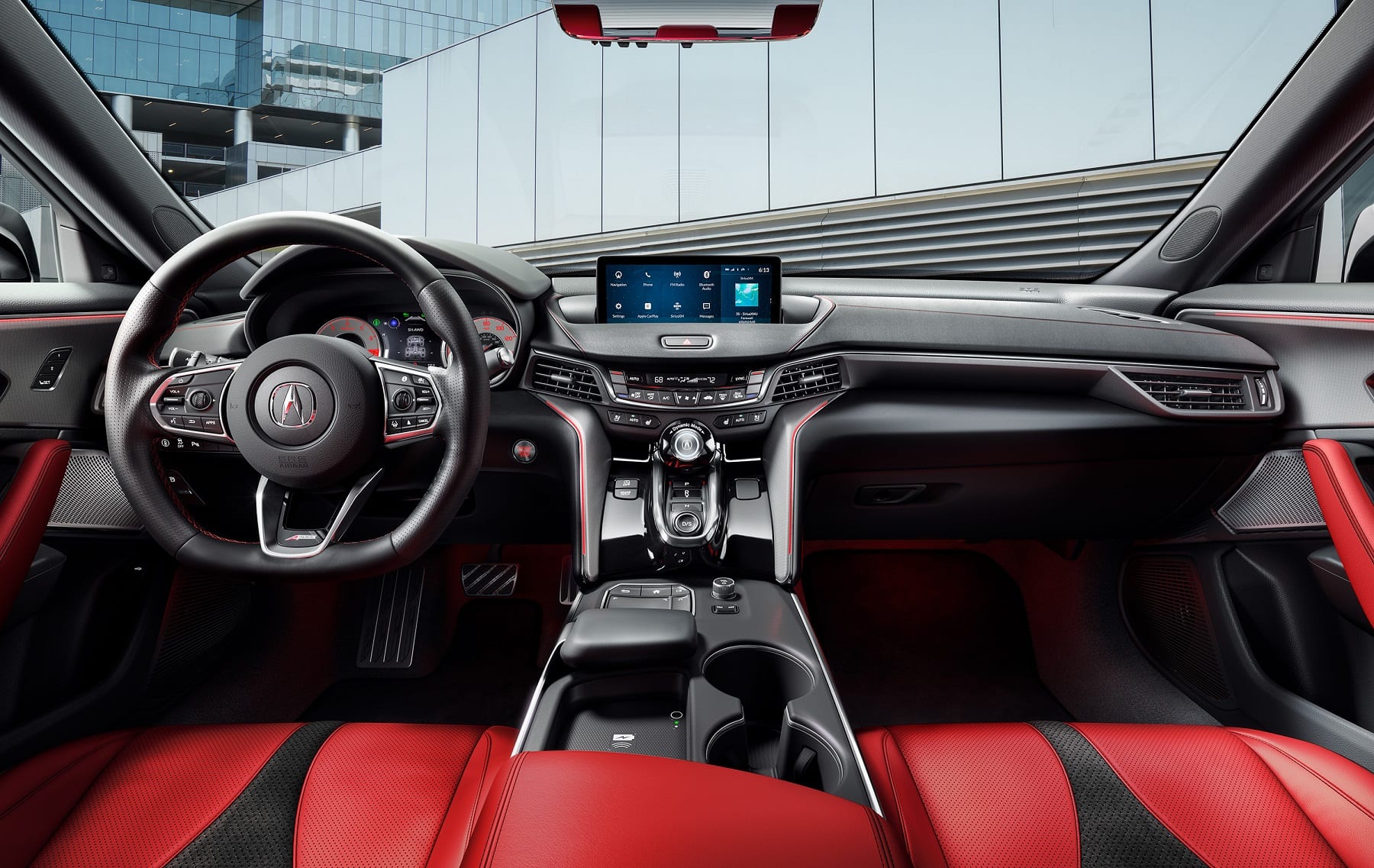 This AWD system is rear-biased in both TLX models and is sure to deliver an engaging experience in the Type S. The latest generation system has 40% more rear torque capacity and 30% quicker front-to-rear torque transfer than the last generation system. It can transfer up to 70% of the engine torque to the rear axle during normal driving conditions and can then split all of that available torque to either rear wheel as needed. The rear axle is overdriven by 2.9% to amplify the yaw moment effect of left-to-right torque transfer. All of this translates to sharper and more accurate turn-in and improved traceability. Like I said, what SH-AWD can do in the NSX is nothing short of remarkable. This latest and greatest system should be magical.

To wrap it all up, Acura seems to have a real winner on their hands. Sports sedans are very much a dying breed and there have been some unremarkable examples lately. Acura has demonstrated they are not only committed to the concept but are willing to throw everything they got at it. If the NSX proved that Acura was still capable of greatness, the TLX proves that it wasn’t a fluke. 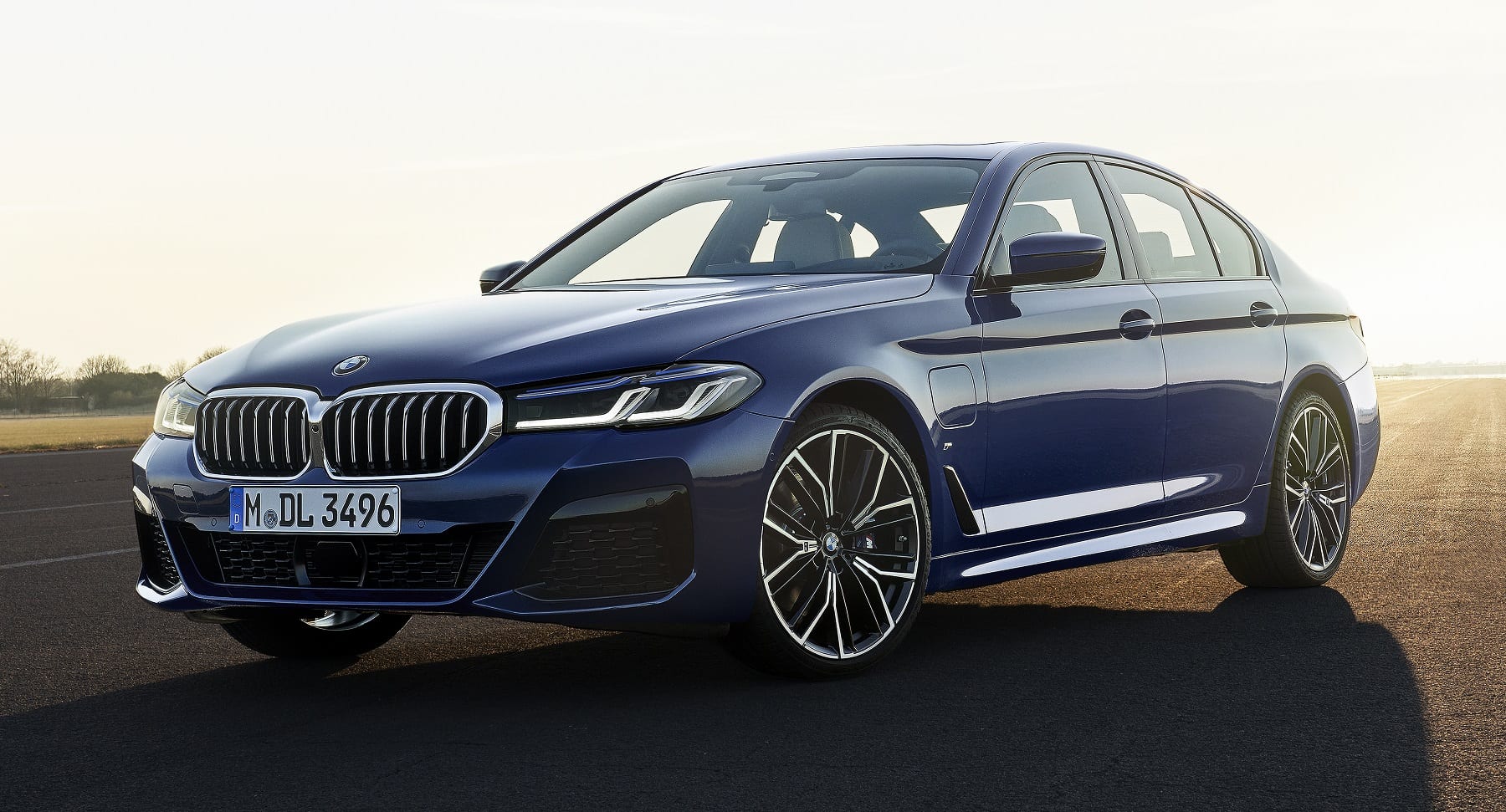 BMW has introduced a mid-cycle refresh for the seventh-generation 5 Series which includes styling updates and a new mild-hybrid system. They also took the opportunity to make the kidney grilles a bit bigger, because BMW.

The design refresh is meant to provide a cleaner surface design and improve aerodynamics as well. The kidney grille is taller and wider with the vertical slats being more pronounced and extending further into the air flow. The vehicle length grows by another 1.2 inches to offer a more sweeping profile. The standard non-M Sport 5 Series sees a Cx as low as 0.27 now. There’s also some new lighting to go along with the minor surface changes. The new standard adaptive LED headlights are slimmer and feature two L-shaped daytime running lights on each side which is also where the turn signals are housed. I’ve resisted the urge to make a joke about turn signals being mentioned in a BMW press release. M Sport Packages feature redesigned front and rear bumpers as well. 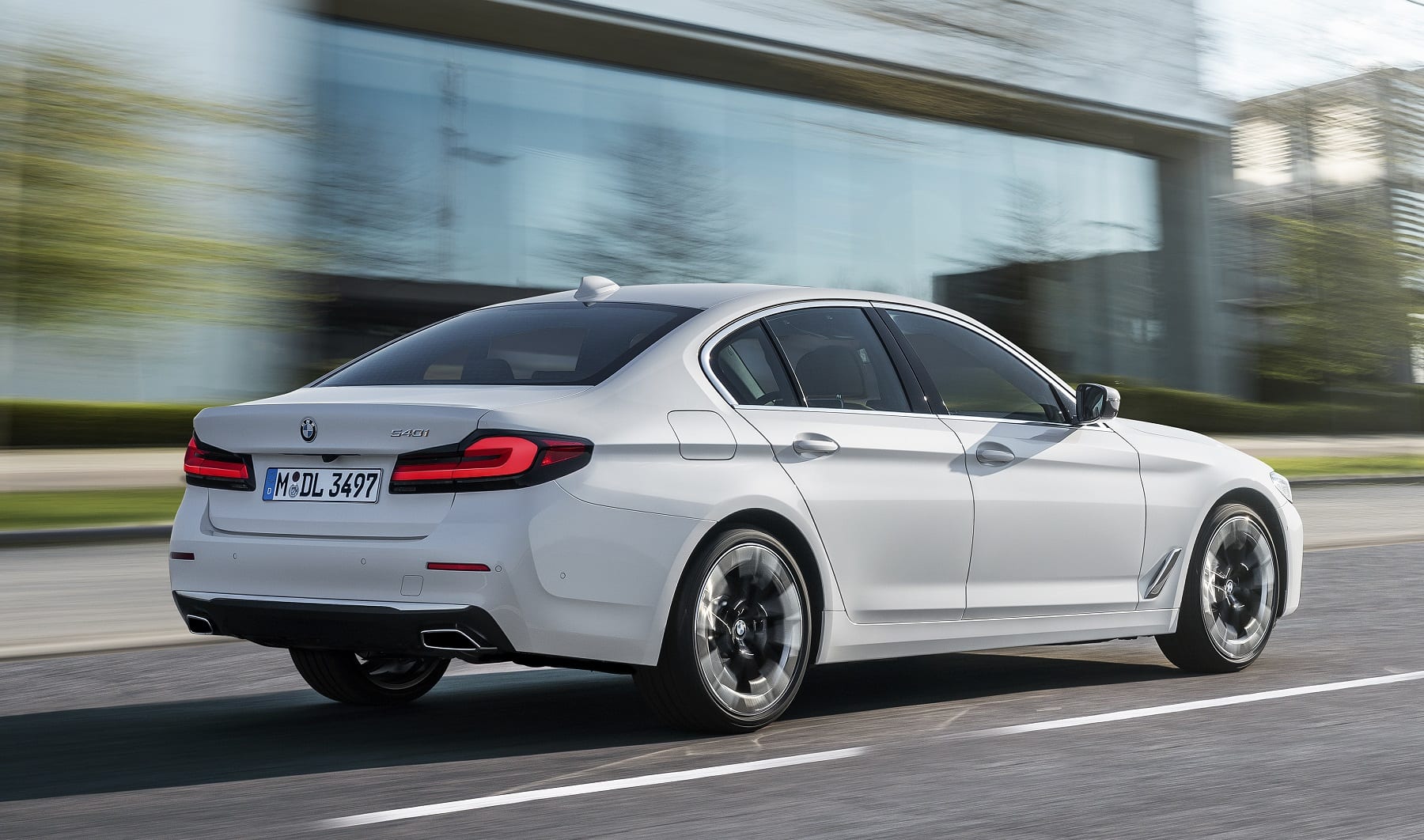 Another big update for the 2021 5 Series is a new 48-volt mild hybrid system that is included on six-cylinder models (540i and 540i xDrive). The system comprises of a 48V starter-generator and a second battery to greatly increase the ways in which brake energy regeneration can be utilized. As before, this reclaimed energy can be supplied to the 12V electrical system to power normal electronics, but it can also be used to provide additional drive power when fed back to the 48V starter-generator.

In the case of the latter, the starter-generator acts like an electric drive unit that assists the engine, allowing it to operate within a more efficient range and ensuring there are fewer peaks in fuel consumption. For sportier driving or quick launches, this system can provide an instant boost of 11 horsepower. The system can also recharge while driving at a constant speed by raising the engine’s load point, but even so there’s no detrimental effect on engine efficiency. The improvements to efficiency have not yet been published by the EPA, but every little bit helps. 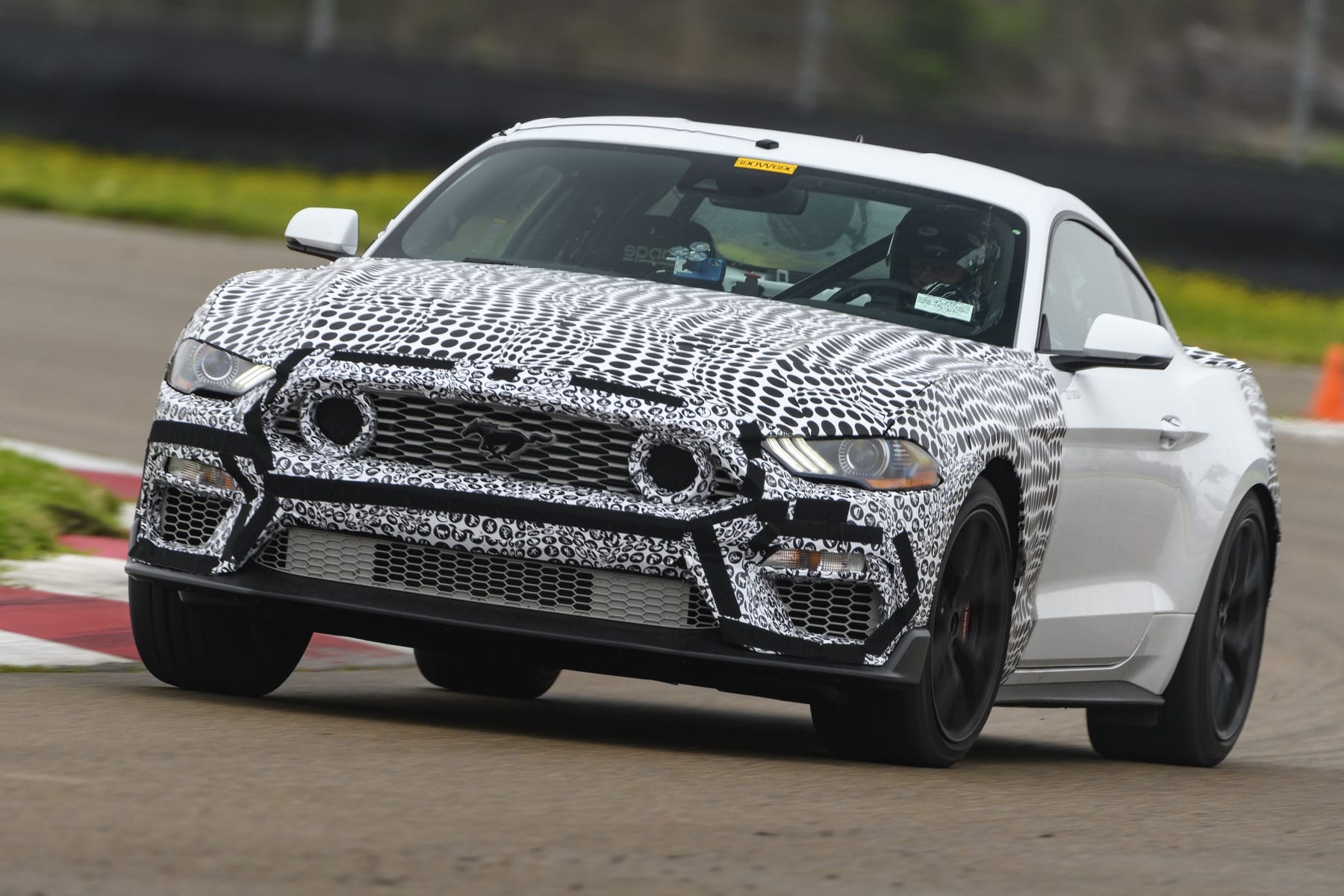 The rumors are confirmed. Ford has announced that a classic Mustang nameplate is being brought back to life this year. The Mustang Mach 1 will be revealed this spring and should go on sale later this year as a 2021 model.

“Mach 1 has a special place in Mustang history, and it’s time for this special edition to claim the top spot in our 5.0-liter V8 performance lineup and reward our most hardcore Mustang enthusiasts who demand that next level of power, precision and collectability,” said Dave Pericak, director, Ford Icons. “Like the original, the all-new Mustang Mach 1 will be true to its heritage, delivering great looks and as the most track-capable 5.0-liter Mustang ever.”

No other details were provided but this already sounds promising. Of the three photos they released of the test mule, two have confirmed that lots of rubber is involved. Michelin Pilot Sport Cup 2s can be seen wrapped around an attractive wheel design, and the first photo here shows they’ll be very wide at each corner. It could be a square 305 setup like the current most track-capable 5.0-liter Mustang, the GT Performance Package Level 2, or a 295/305 setup from the GT350. Either way, it’s going to have a large contact patch to work with. I would expect an evolution of sorts of the PP2’s suspension as well, which means specially tuned MagneRide and stiffer springs and roll bars. A Bremo brake caliper can be seen behind the front wheel as is available on all Performance Package-equipped Mustangs, but they could improve it with Brembo hardware at all four corners, rather than just the front. 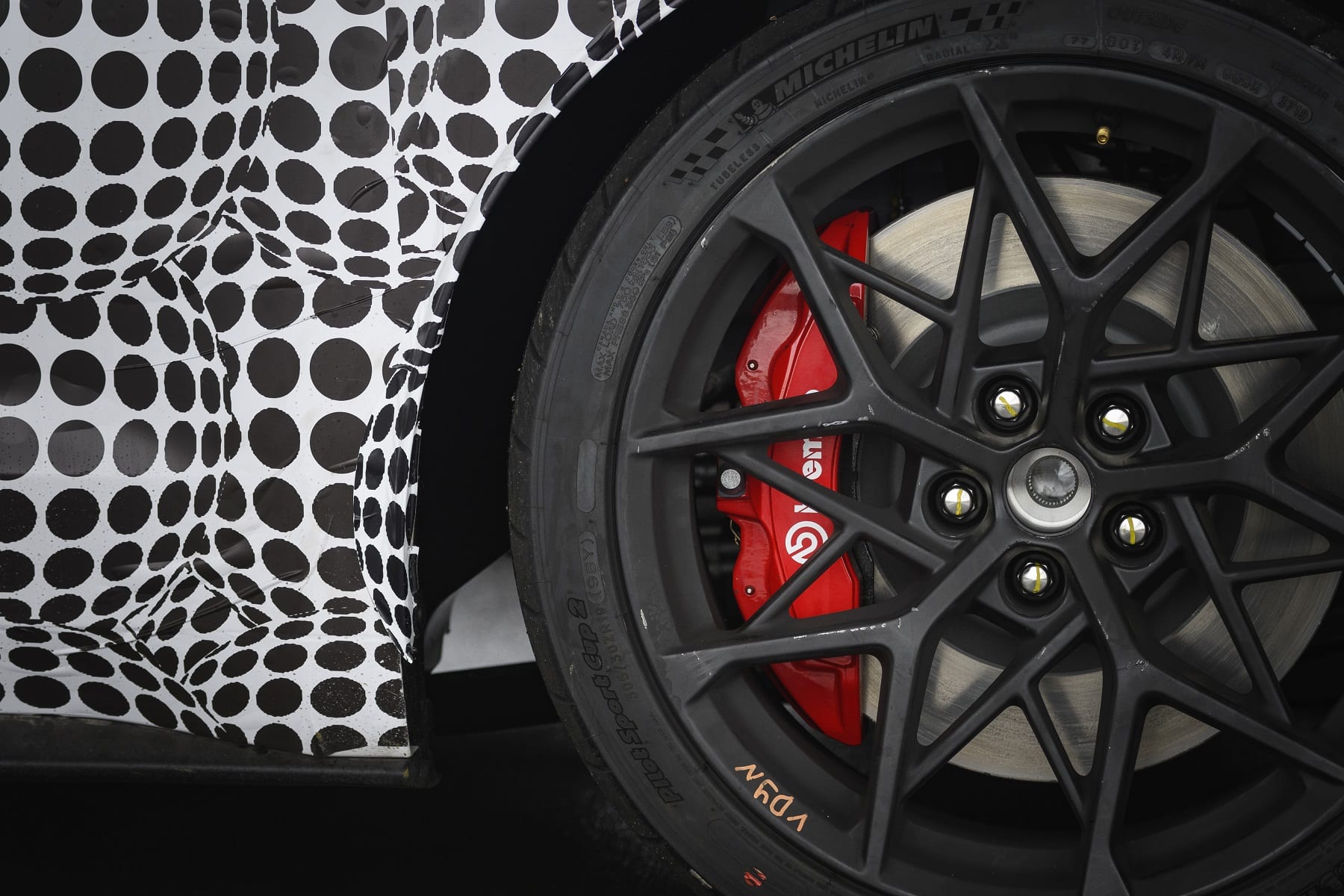 I can see that the aerodynamics are also slightly updated with a larger rear spoiler and a chin spoiler at the front. Plus there’s the obvious styling update to the grille which adds classic Mustang fog light hole things. It will be interesting to see if those are functional in channeling cold air for the engine or cooling or if they’re just for show. Either way, I like what I see so far. I’ll for sure bring you more on this as I get it. 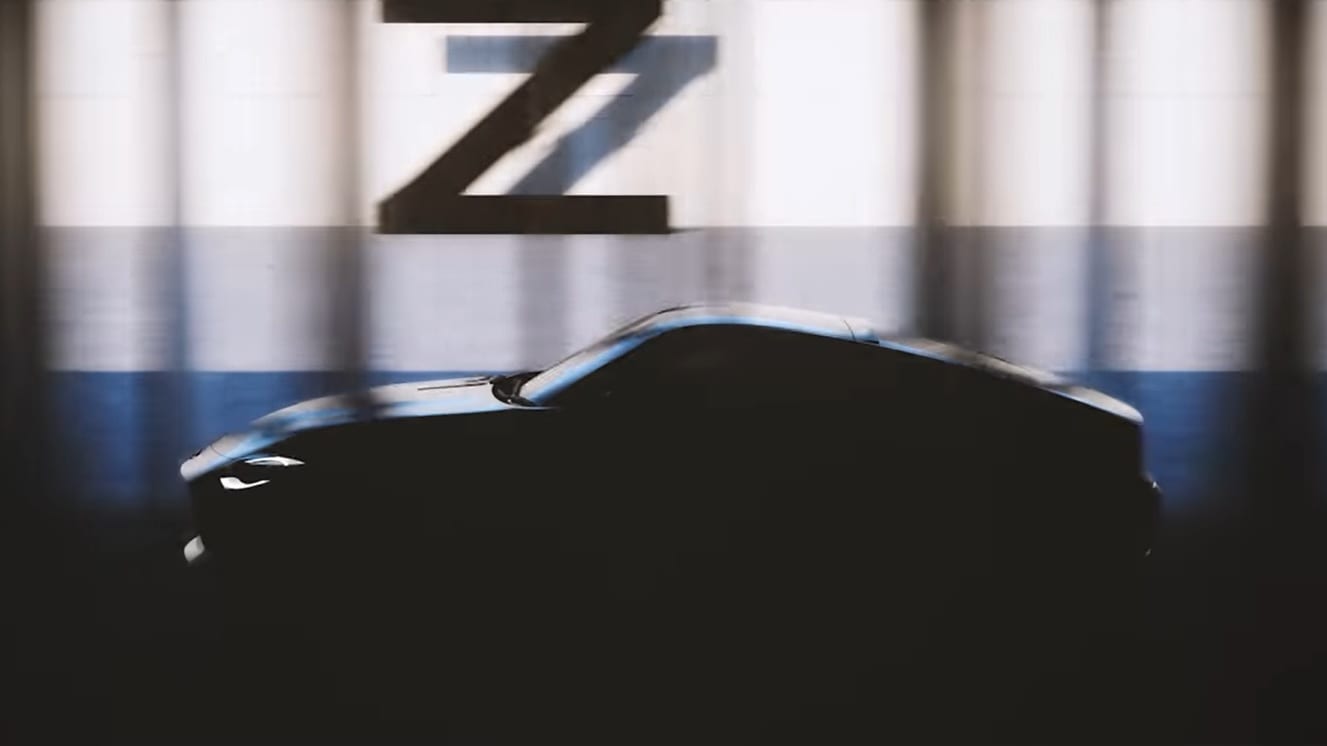 In other sports car news, Nissan may actually be doing something cool with the next Z car. In a teaser video titled “NISSAN NEXT: From A to Z” in which they show all the cars they’re promising to stop neglecting and bring into the new decade, they casually show off a car that can only be the next Z. Though all we see is a silhouette, it’s easy to tell our worst fears have not been realized. The Z hasn’t been turned into a compact FWD crossover… yet. Instead it paints a much more optimistic picture of a modestly sized sports car with what looks like some classic styling cues that hearken back to its origins.

We’re still in the dark about technical details but it’s long been believed it will utilize the potent twin-turbocharged 3.0-liter V6 from the Infiniti Red Sport sports models which is capable of 400 horsepower. It would be the obvious choice and a recent SEMA concept proved that Nissan was at least considering it. That concept saw that engine paired with a six-speed manual and stuffed into a track-built 370Z. We at least know it’s possible.

As for timing, we know Nissan is planning to finally do something about their aging lineup by replacing or adding to the lineup with twelve new models in the next year and a half. The Z would be a great halo car of sorts for that effort, so I think we’ll be seeing it soon.