Welcome to the Hooniverse News! As always, this is a weekly recap of the biggest stories in the automotive industry without the fluff or bull. This week: Jeep reveals ridiculously luxurious Wagoneer and Grand Wagoneer, Canoo shows off radical cabover EV pickup concept, Hyundai gets us antsy with Kona N renderings, plus your news for the week. 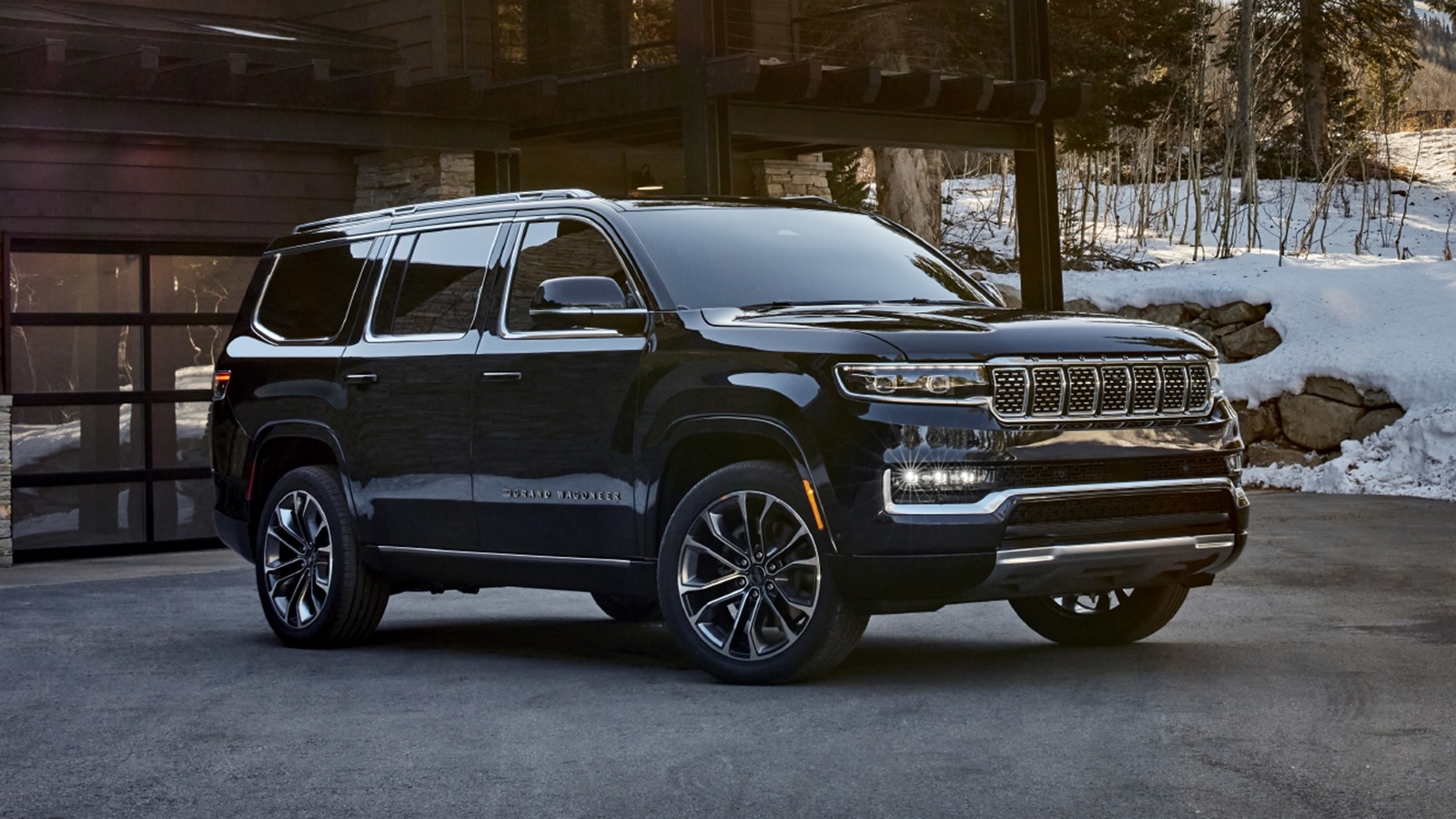 The Wagoneer and Grand Wagoneer has been absent from the Jeep lineup (as a standalone model) for as long as I’ve been alive. But that changes this week with Jeep’s highly anticipated reveal of the 2022 Jeep Wagoneer and Grand Wagoneer. These luxury SUVs become the new premium benchmarks for the brand and are also the biggest in the lineup. And being Jeeps, they come with plenty of off-road capability.

The exterior design of both models is pretty much identical to what they teased a few months ago with the concepts. It seems to be one of those designs that’s either loved or hated with few in the middle. Designers took inspiration from the original icon for its silhouette, seven-slot grille, and an overall design that they call confident and has an undeniable presence. To differentiate the two models, they have slightly different LED lighting and other exterior features. Wagoneer gets its own headlamps and fog lamps, accent badging, and a standard side step. Meanwhile the Grand Wagoneer gets “unique premium” LED lighting, fender flares, power retractable side step, a two-tone black accent roof, plus a distinctive hood and front end. 20″ or 22″ wheels in various finishes and colors are available depending on the specification. 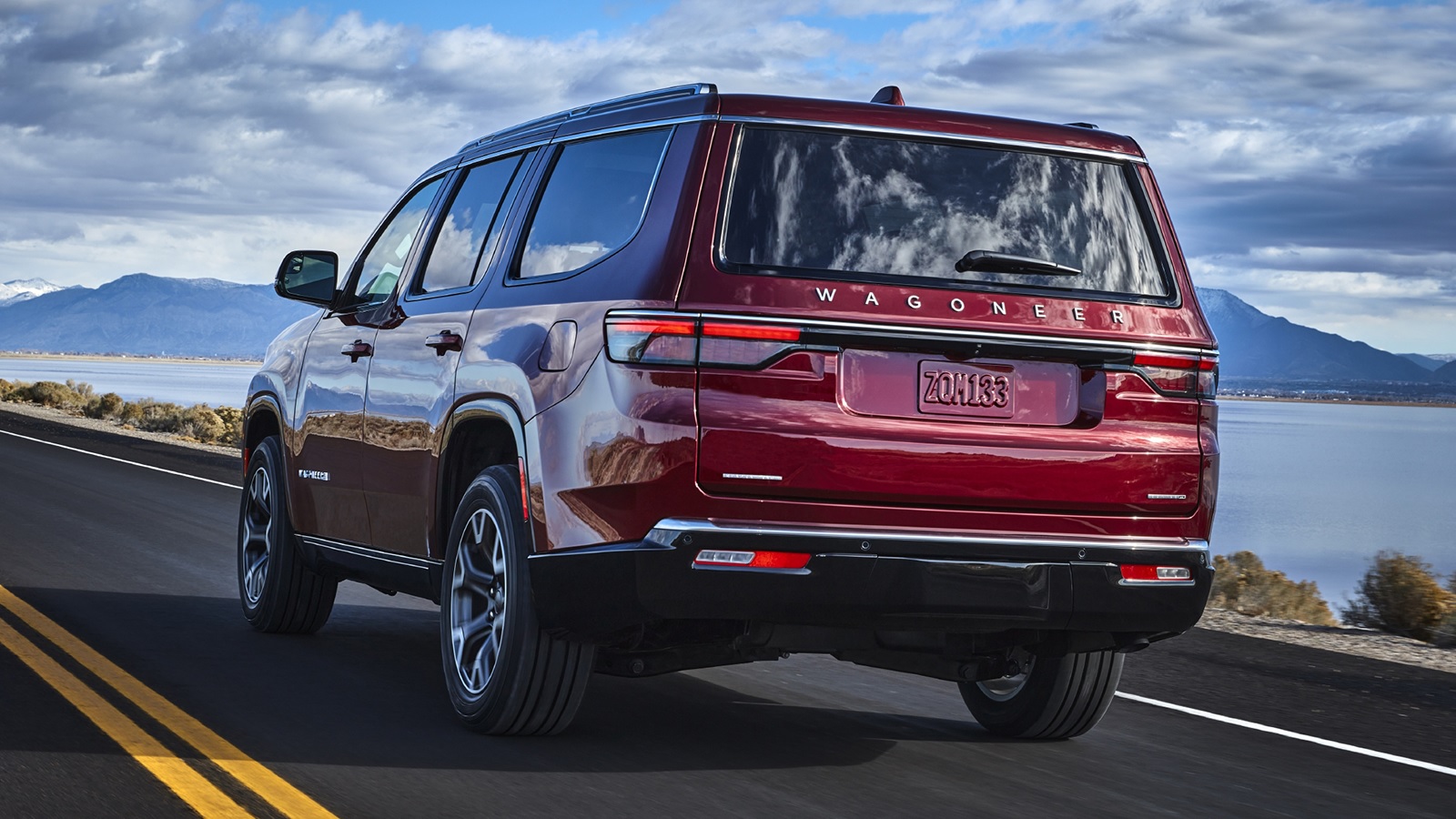 One of the bigger reasons to jump up to the Wagoneers is for their interiors. This is perhaps where Jeep aimed to impress the most with a gorgeous, spacious, and upscale interiors for both models. Handcrafted Satin American Walnut wood is in abundance as is the Nappa leather. Another thing there’s a lot of is screens. The driver works with a digital gauge cluster and a feature-packed heads up display. UConnect 5 is projected on either a 10.1″ or 12″ touchscreen display in the center with split-screen capability and dual-application operation. There’s a separate screen situated below the main infotainment display for comfort controls. There’s also an available 10.25″ passenger screen which gives your copilot something to do. They can access navigation, entertainment, Amazon Fire TV for Auto, and the exterior cameras. Second-row passengers have a bunch of options as well with a pair of 10.1″ touchscreen displays with independent streaming capabilities from major content providers. 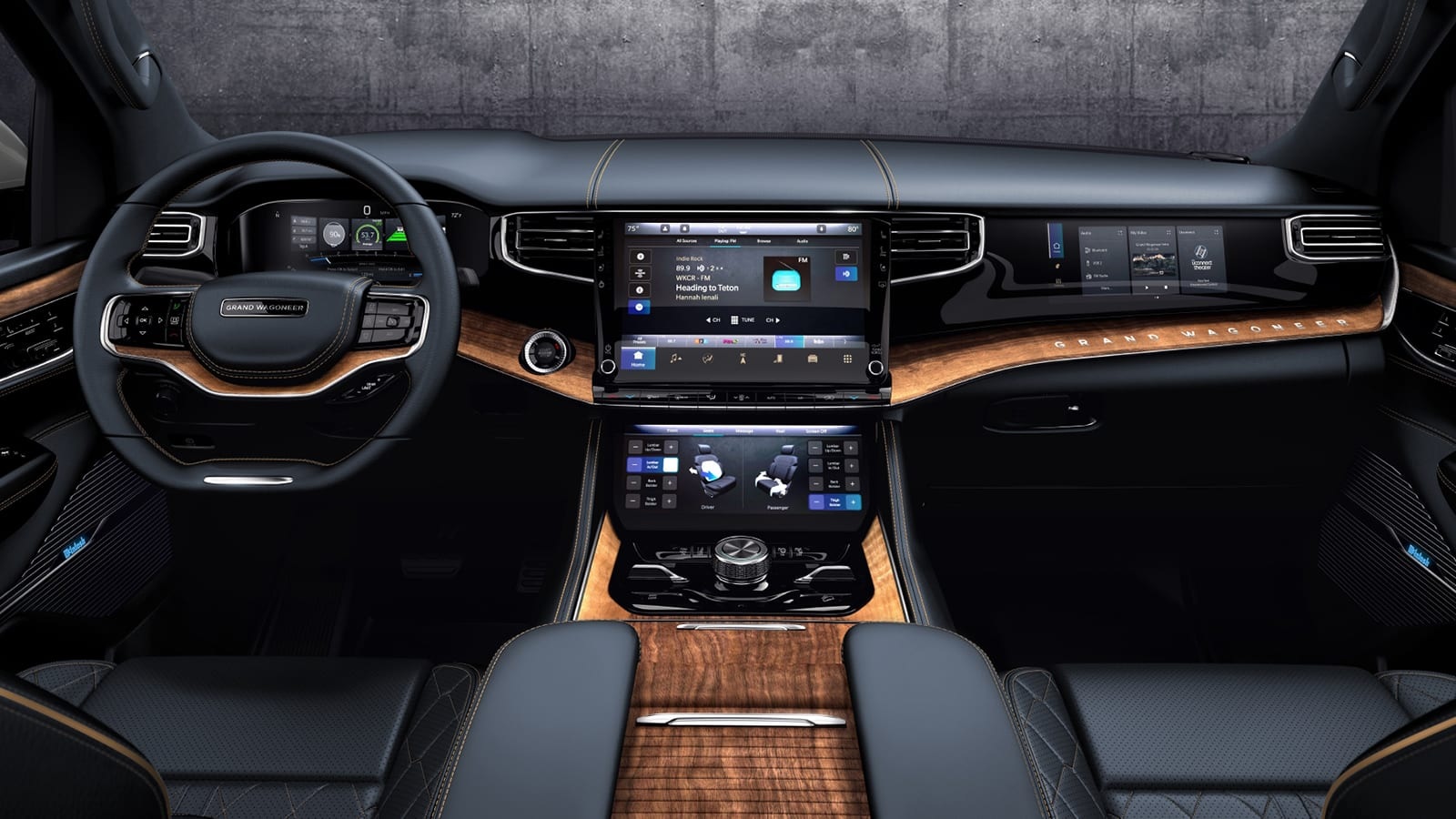 Now on to the good stuff. There are three available 4×4 systems – Quadra-Trac I and II and Quadra-Drive II. Each version adds more hardware to the mix for greater capabilities. Quadra-Trac I delivers full-time four-wheel drive without any switches to push or levers to pull. Quadra-Trac II adds a two-speed transfer case and has more sensors to maintain the best traction at all times and has more flexibility in doing so. Quadra-Drive II comes with an electronic limited-slip differential (it’s mechanical on other models) and has the ability to anticipate low traction and adjust proactively. There’s various terrain modes to control all of this. Both models also feature Quadra-Lift air suspension which can add up to 3.6″ of lift span supported by four-corner air springs that provide an air-cushioned ride. This operates automatically but can also be controlled by the driver. It can lower itself up to 0.6″ from its normal ride height in Aero Mode or even down to 1.6″ in Park Mode (for easier ingress/egress) while the two Off-Road modes add up to 2 inches of ride height. 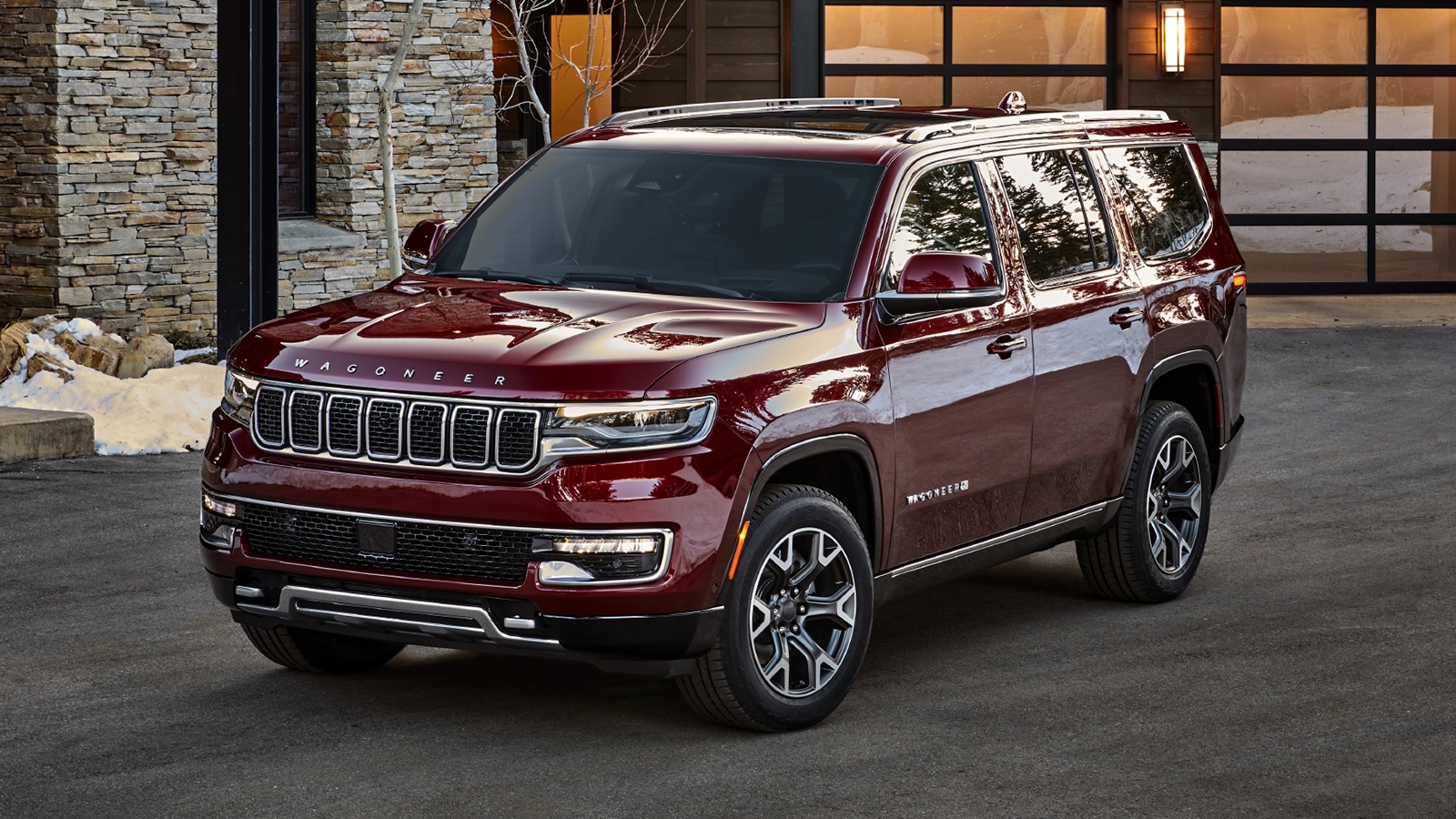 For power, the Wagoneer is equipped with a 5.7-liter V8 and paired with an eTorque hybrid system. This replaces the alternator with a belt-driven motor generator unit and a 48-volt battery pack for torque addition in certain situations, brake energy regeneration, and smoother engine start/stop. The V8 alone produces 392 horsepower and 404 lb.-ft. of torque and features cylinder deactivation for fuel saving.  Meanwhile on the Grand Wagoneer, there’s no hybrid power at all. Just a 6.4-liter V8 with 471 horsepower and 455 lb.-ft. of torque. Both engines are mated to an eight-speed TorqueFlite automatic. Towing is rated at up to 10,000 pounds for both models when “properly equipped”.

Production begins this summer in Warren, Michigan with first arrivals beginning in the second half of the year. Jalopnik reports that pricing for the Wagoneer starts around $60,000 while the Grand Wagoneer commands at least $89,000. 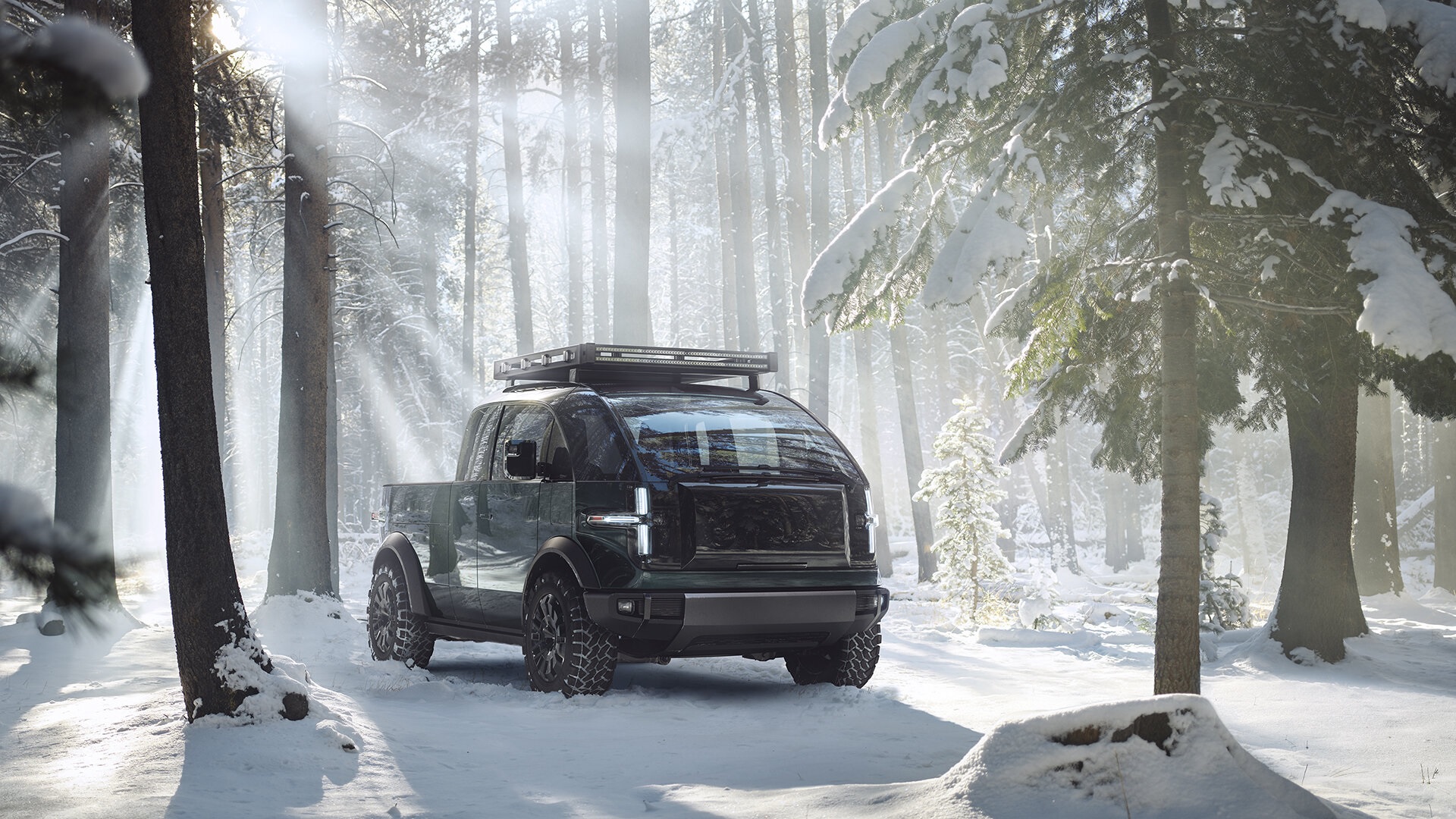 I normally avoid talking about EV startups because they’re starting to be a bit like local breweries – you can’t go a week without hearing about another new one. It’s getting a little absurd.

Picture this. One day you’re headed into work and find a brewery down the street from your office. You wonder how long it’s been there and how many different IPAs they have. You think to yourself, “oh cool, I’ll have to hit them up the next time work drives me to insanity – so tomorrow”. Then after work you take an alternate route home to hit up the grocery store and you see another one. This brewery has a name that’s a funny play on words. You think to yourself, “ha, that’s clever. I bet they have a shit load of IPAs too”. But you’re also wondering why there’s a second brewery so close to the other one – you’ve only driven two miles. This one also looks new – and hey, wasn’t that where my gym was? Then you get to the grocery store and there’s a third and a fourth. One has a cute little furry woodland creature as its logo and the other has a live band every night which drowns out everyone’s conversation. Both only brew IPAs. Now you’re getting concerned. How can so many breweries coexist like this? Why are there so many in my town of only a couple thousand? But you calm yourself down by thinking about how good competition can improve the quality of shitty identical-tasting IPAs for everyone. You chuckle a bit and ultimately get on with your day and head home. But then you find that your home is now a brewery too. You pull out your phone to call your spouse in a panic. Your phone is now a craft IPA. 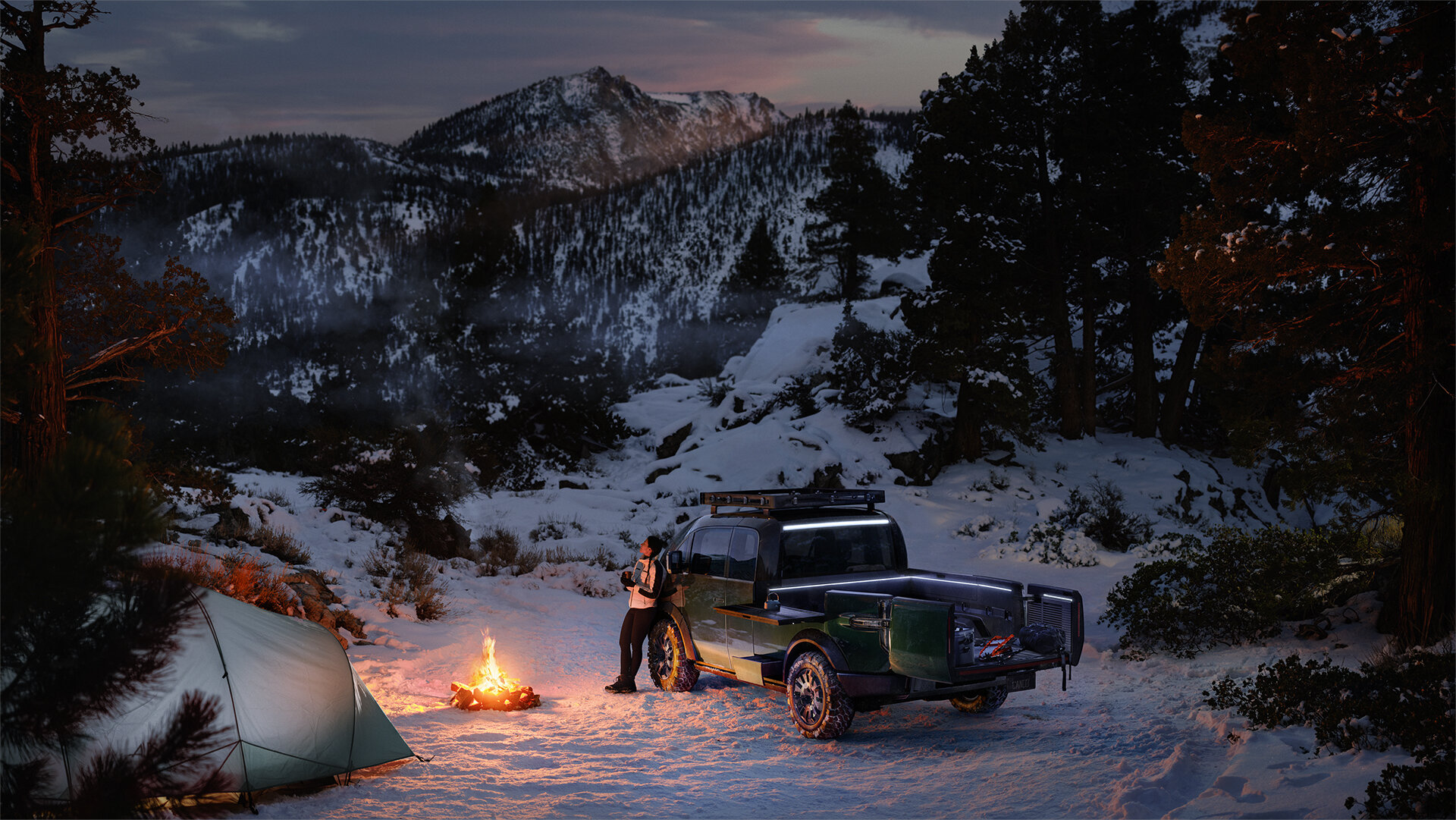 That’s what covering new EVs is like. It’s a constant flow of new companies who looked at how many times Tesla nearly went bankrupt with the world’s richest man at the helm while building cars in tents and thought to themselves, “yeah, we can do this”. And most of the time, their proposed cars look like they were designed by someone who doesn’t have the first clue about what makes a vehicle roadworthy. But once in an IPA moon there’s an EV startup with a proposal that just can’t be ignored. This time it’s a company called Canoo with an EV pickup that’s sure to spark some opinions.

They’ve been promoting a multi-purpose van to theoretically attract fleet buyers, but this one is meant for the general yet adventurous consumer. It takes full advantage of the company’s multi-purpose platform architecture to offer an unconventional pickup design. It’s a cabover which hasn’t been seen in our general pickup market in decades. The goal for doing so was to provide as much bed space as a typical pickup while having a much smaller footprint. Its overall length with a 6-foot bed is 184 inches and that increases to 213 inches with an integrated bed extension which turns it into an 8.5-foot bed. The shortest 2020 F-150 is 209.3 inches (regular cab, 6.5′ bed). 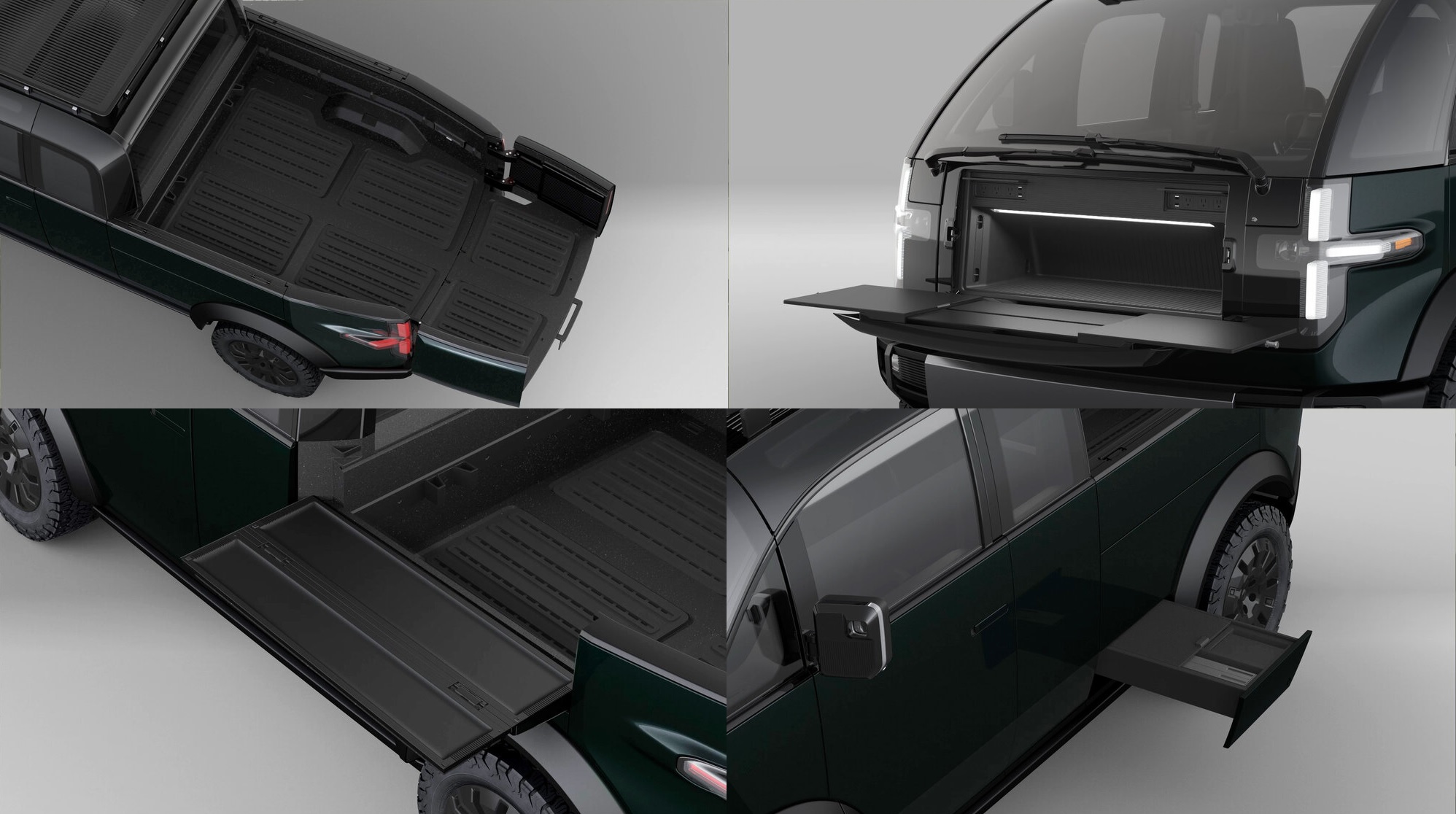 Its radical design allows for an absurd amount of storage solutions, including side step storage drawers and a frunk with a cover that can fold down to produce a work bench. The tailgate splits open and there’s a flip-down side table on both sides of the bed for easier side access. The bed also has integrated overhead and perimeter lighting and a multi-accessory charge port for powering tools or other accessories. Canoo plans to offer dual or rear motor configurations with up to 600 horsepower and 550 lb.-ft. of torque for the dual motors. This allows for a payload of 1800 pounds and probably decent towing too, but that hasn’t been revealed. Its expected range is 200+ miles.

The company plans to open pre-orders this summer. They expect this to reach production in early 2023 but there’s of course a lot of unknowns with a fairly new company like this. Whether they can produce these in any meaningful numbers or if the final product will be anywhere close to this is something we’re just going to have to tell with time. But I can already say that this is one of the most interesting EV concepts I’ve seen yet. Hyundai took to Twitter to tease something that may actually get me to like compact crossovers. The Hyundai Kona is getting an N variant and it’s taking direct inspiration from the beloved Veloster N. It’ll be a sporty and relatively light and have good power.

Jalopnik reports that it’s expected to have the same engine from the Veloster N, which means 275 horsepower from a 2.0-liter turbocharged inline-four. The Veloster has a manual and a DCT option but I can pretty much guarantee this Kona N will mandate a DCT. It can be expected to weigh under 3,200 pounds, as other Kona models can be as light as 2,900 pounds in certain configurations. It’s not known if the Kona N will be front-wheel drive like the Veloster N or all-wheel drive as is available on other Konas. What we do know is that it’ll have all of the same signature N styling that we’ve come to expect, so lots of vents and red accents. 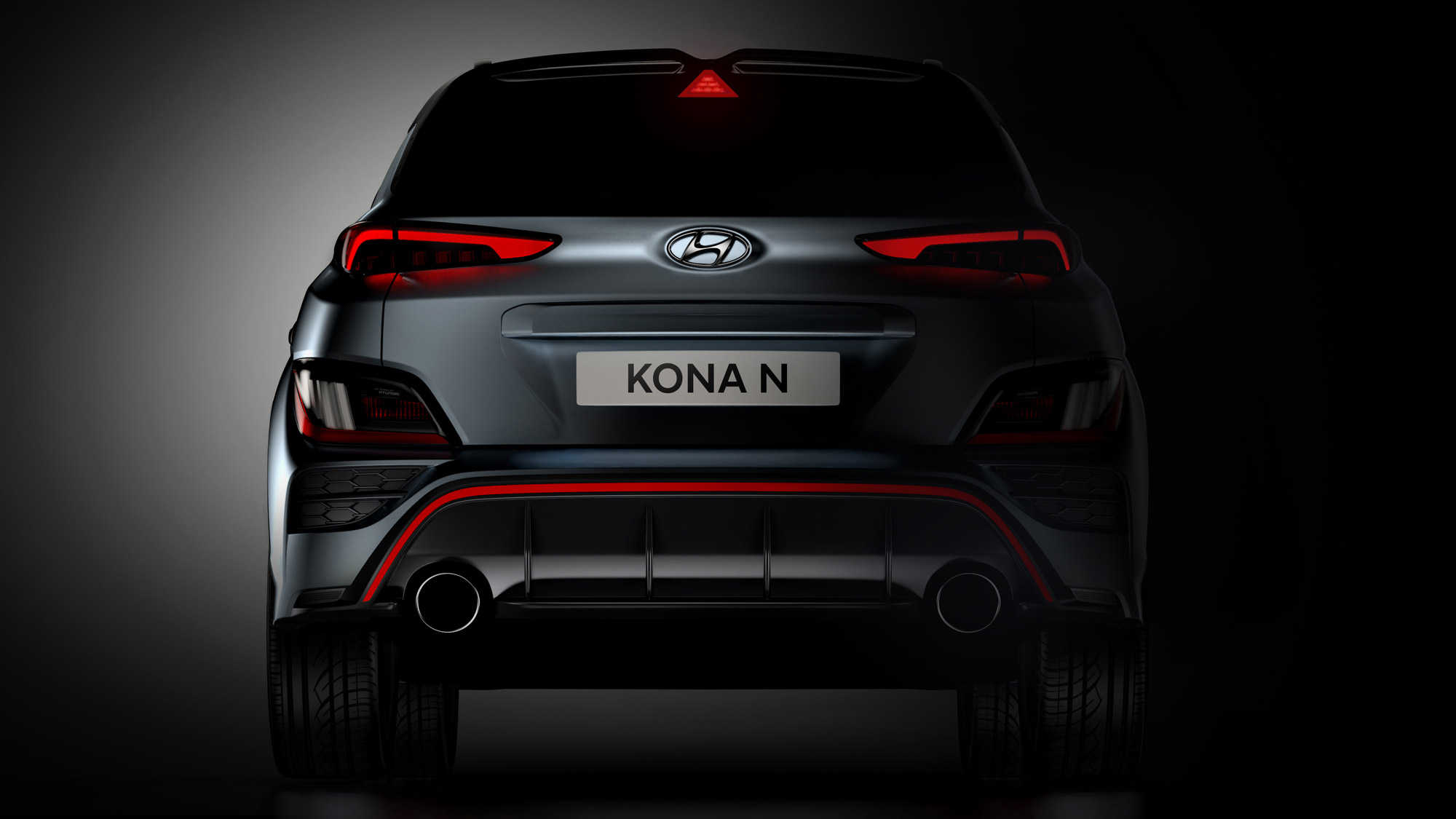 We know it’ll be coming to the US later this year but we don’t know much else at the moment, like when it’ll be revealed in full. All I know is that a compact, lightweight, modestly powerful sport crossover is something I never knew I wanted. This could get good.