Welcome to the Hooniverse News! As always, this is a weekly recap of the biggest stories in the automotive industry without the fluff or bull. This week: BMW is really doing the whole ugly as fuck 4 Series thing, Porsche is closing their North American GTLM program next year, Mazda is reportedly bring a turbocharged 3 this year, Lexus teases a next-gen IS, and your automotive news! 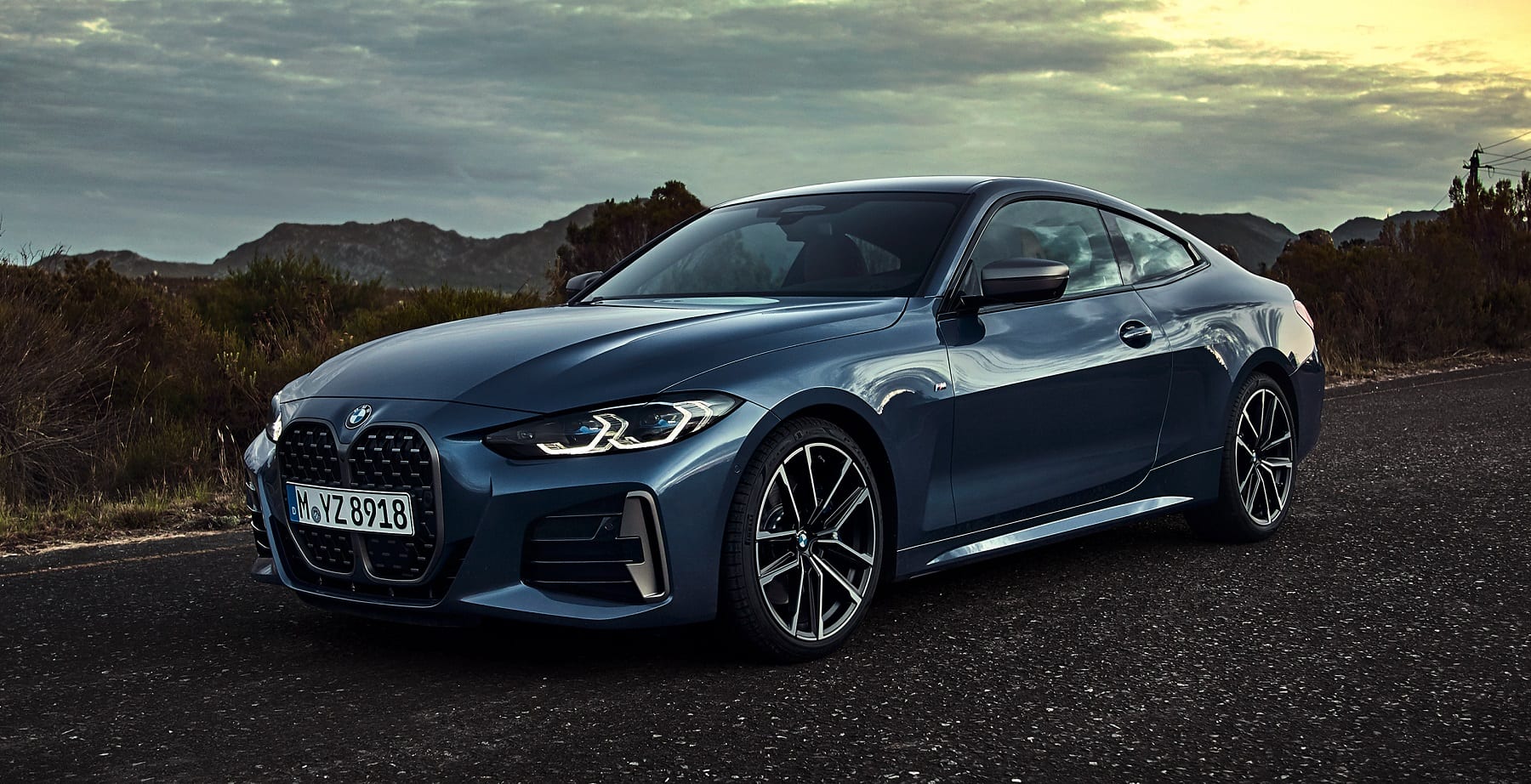 On a day when most other content creators and brands were silencing their social media feeds to make way for more important voices, BMW gleefully revealed the all-new 4 Series Coupe. They should have waited… forever.

The BMW 4 Series, the Coupe and soon to be Convertible and four-door version of the four-door 3 Series, is the latest in a long line of BMWs that have been made significantly uglier than anything else on the road. It’s packed with more performance, infotainment tech, safety features, and ugly-as-fuck-ness than the outgoing model. It arrives on our shores in October – just in time to scare the kids for Halloween.

Holy shit it looks so bad 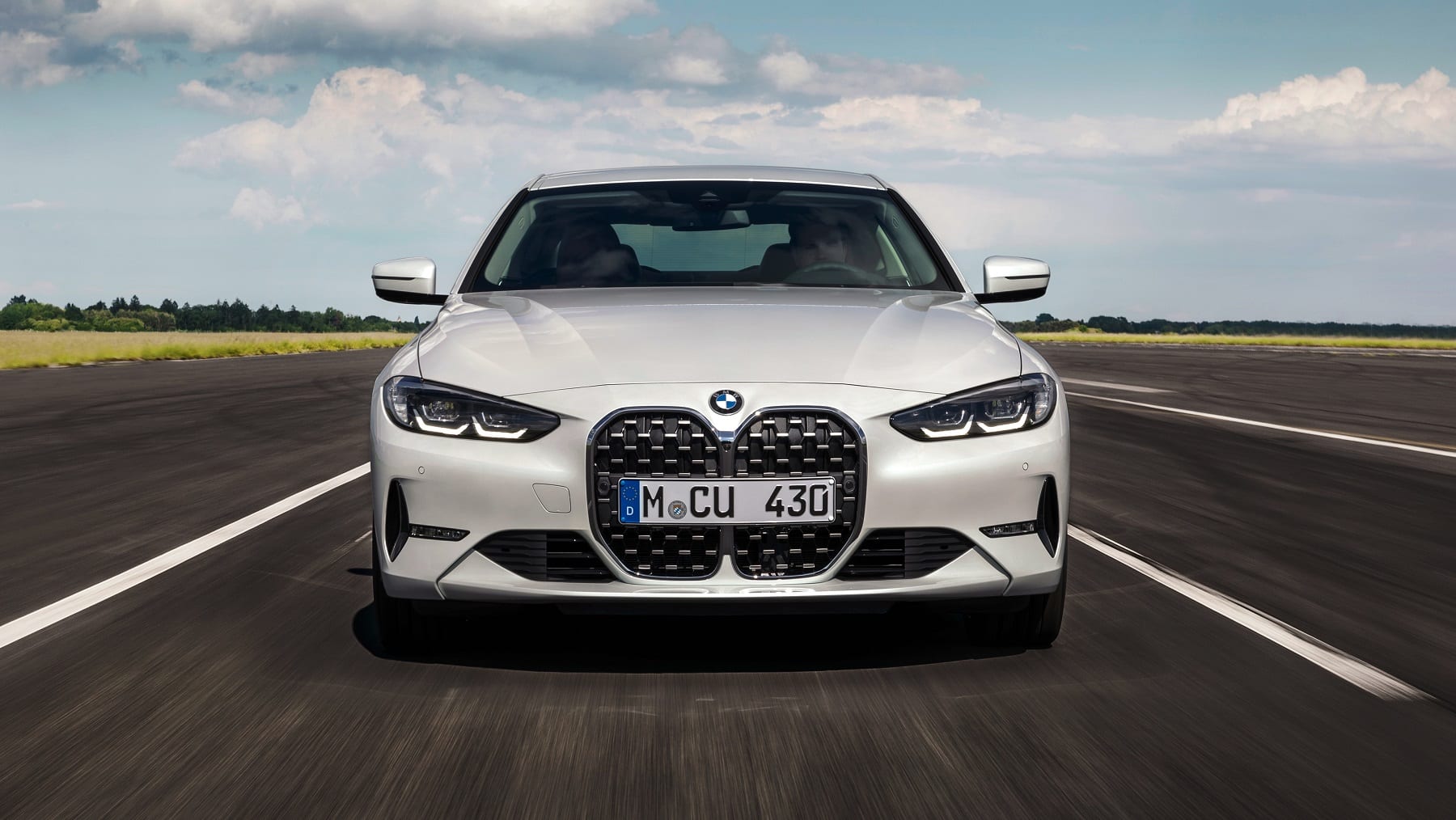 When BMW split the 3 Series Coupe into its own distinct model, the 4 Series, the intent was to allow more design freedom for the two cars. They’re still sharing a platform, powertrain, and all their tech, but they can make more of a distinction between them. As you can see, that design freedom is working well. It indeed looks nothing like the 3 Series and is in fact a bit bigger in every dimension. It’s 2.2 inches longer, 1.o inch wider, 2.2 inches lower, and has a 1.0 inch wider rear track while sharing the same wheelbase. This gives it a more low-slung and sleek silhouette that’s befitting of a coupe.

The silhouette isn’t the problem though. It’s an attractive shape with clean lines, a long hood, a tapering greenhouse ending in the Hofmeister-kink, and muscular fenders. Nor is it the rear end with its slim, darkened L-shaped tail lights which extend into the quarter panels or trapezoidal exhaust finishers. The decision to grace the face of this car with a large vertical kidney grille instead of a normal horizontal one is what has completely ruined it. This kind of grille has been making appearances on BMW’s crossovers but has been spared from anything of importance until now.

I can applaud BMW for trying something different in a world where cars, especially ones in this segment, are becoming less interesting. But I and many others online who were totally going to buy one of these anyway and thus have valid opinions think it’s missed the mark. Nothing was wrong with the kidney grilles when they weren’t large enough to swallow a child yet that’s all we’re getting now. Every other good thing BMW does design-wise is overshadowed by this one thing and that’s enough to ruin it all. This article would have been way more positive if they had just given it the grille from the 3 Series. 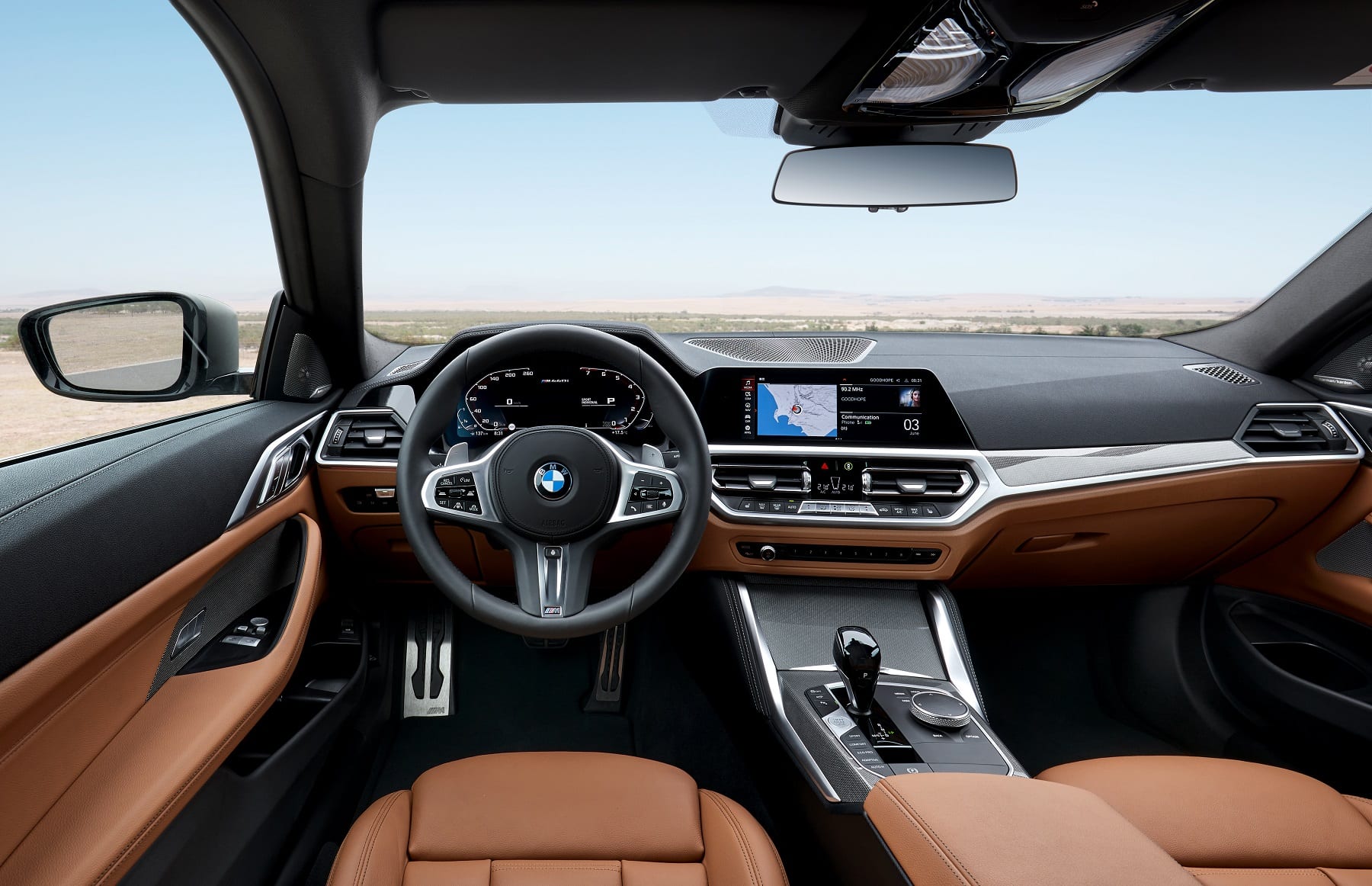 Moving on to things that BMW got right, a lot of the same things from the excellent 3 Series and even the new 5 Series I just talked about are available on the 4 Series. It gets the latest iDrive 7 with navigation as standard. That also includes “BMW Maps” which is a cloud-based feature that assists with rerouting based on real-time traffic conditions and reported hazards collected from external sources and other BMWs with the feature. The system can also accept destination inputs on the move with voice control. Additionally, points of interest along the route are described in greater detail and show reviews, opening times, and photos. It works on minor roads too, not just highways.

One option worth noting is “Live Cockpit Professional” which is navigation enhanced with 3D visualizations of the surrounding area. It shows all cars, trucks, and motorcycles registered by the cameras and sensors in the driver’s current lane and any adjacent lanes. Vehicles within a “critical distance” are highlighted and it will indicate maneuvers which can be carried out with the help of assistance systems. The goal is to improve situational awareness on the road. 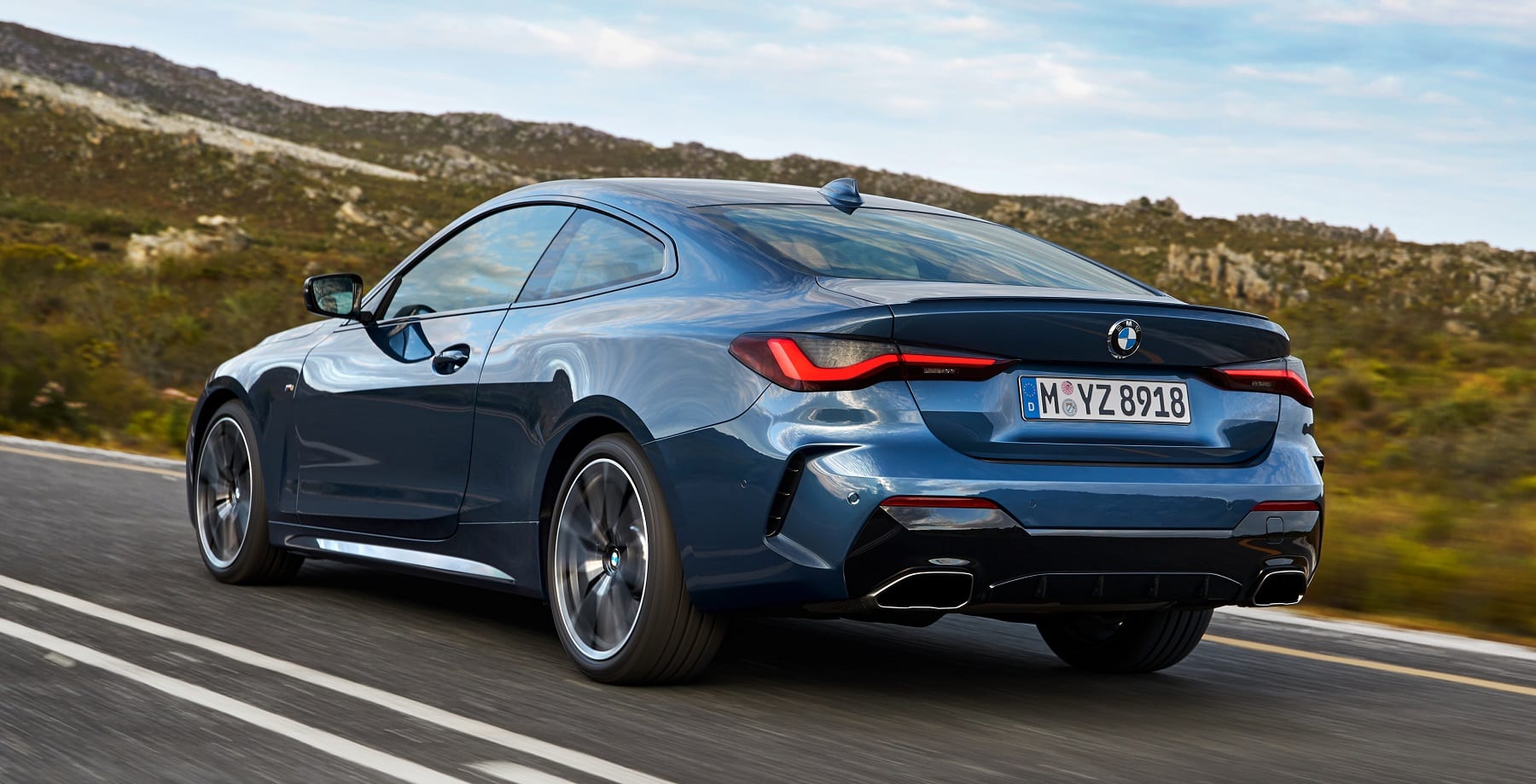 Some other driver assistance features that are available include active cruise control with stop and go, level 2 autonomous driver assist, and parking assistance with a 3D surround camera view and parallel park assist. You can also opt for a drive recorder which uses built-in cameras to record what’s going on at the front and rear on command. Footage is automatically saved in an accident.

And finally, Android Auto is available as standard in addition to Apple CarPlay. The Germans finally figured out that the overwhelming majority of smart phones in the world are running Android.

The powertrain options will all sound familiar but there’s a few things here that even the 3 Series doesn’t have yet. The 4 Series launches as the 430i, 430i xDrive, and M440i xDrive. The 430i, like the last two digits suggests, uses a 2.0-liter twin-scroll turbocharged four-cylinder with 255 horsepower and 294 lb.-ft. of torque. This one is RWD standard and has xDrive as an option. The M440i xDrive, also as the digits suggest, uses a 3.0-liter twin-scroll turbocharged inline-six with a healthy 382 horsepower and 369 lb.-ft. of torque. This one appears to be all-wheel drive only.

The M440i follows the new 5 Series’ lead and receives a 48-volt mild hybrid system as standard. This system includes a 48V starter/generator unit and a separate 48V battery for energy recuperation, storage, and use while driving. Energy is recuperated from deceleration, braking, and by simply driving in sport mode. Stored energy can be used to boost performance during hard acceleration or by powering various electrical systems, thus reducing load on the engine. So far this mild hybrid system is only available on 6-cylinder models.

So that’s about it for the 4 Series. Lots of impressive tech, good performance, and a mostly attractive design that’s capped off by the single most offensive-looking design choice in the entire automotive industry. Is this bad enough to ruin the whole car for you too? If not, prices start at $45,600 for the 430i, $47,600 for the 430i xDrive, and $58,500. 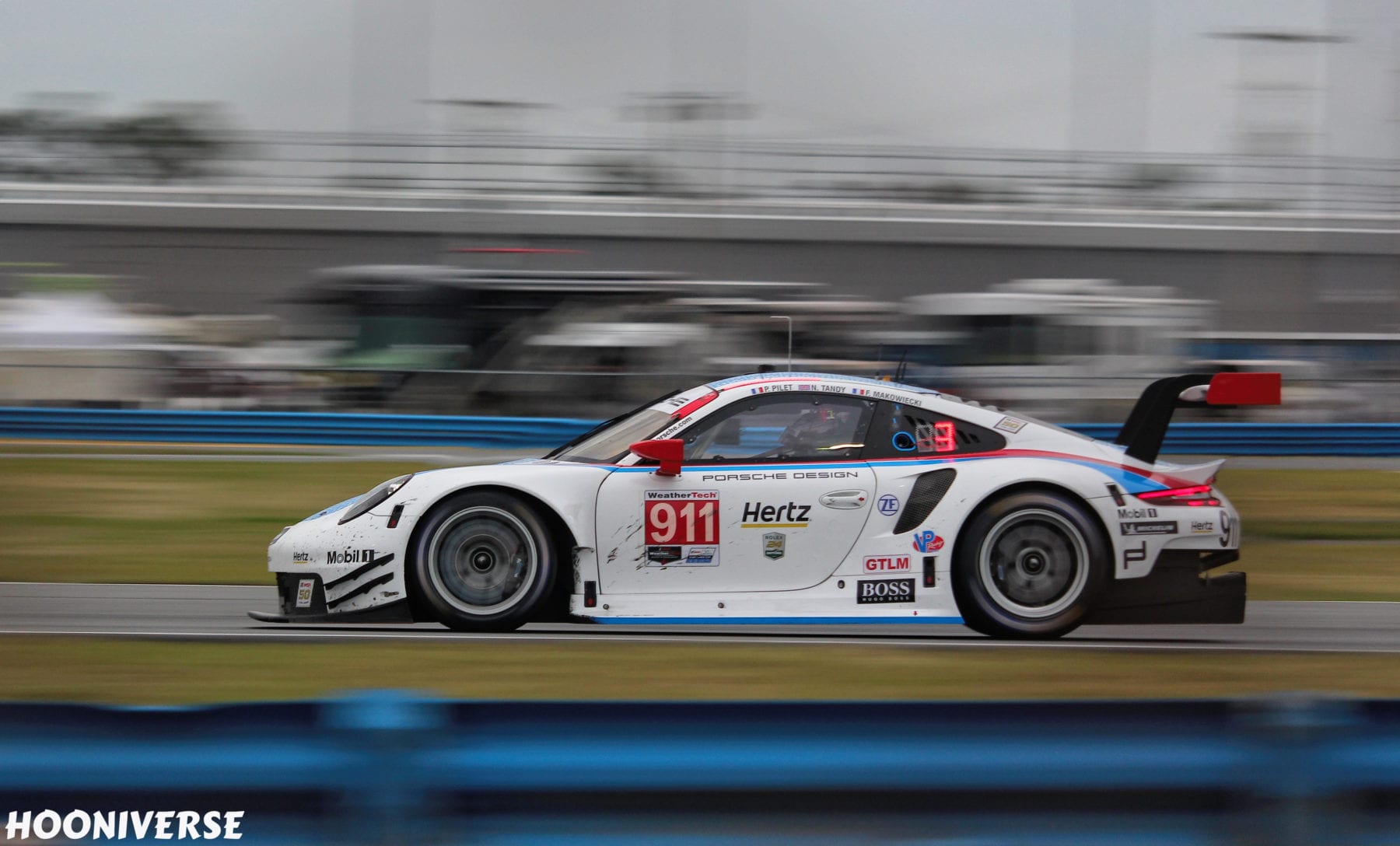 It’s almost like we’re not allowed to have good news anymore. Yesterday morning, Porsche stunned the motorsports community with word that they’ll be ending factory involvement in the IMSA WeatherTech Sports Car Championship at the end of 2020. Porsche has been involved with Core Autosport for several years now and have run an extremely successful team with factory 911 RSR GTLM cars. Well before then they were having success with Flying Lizard Motorsports in the days of ALMS. They swept the championship just last year after a dominant season. But this season is set to be their last – for now. And the reasoning is unfortunately what you’d expect.

Fritz Enzinger, Vice President Porsche Motorsport, emphasized that it was not an easy decision, but that “it is only logical for Porsche Motorsport to make a contribution to coping with the economic fallout”. Porsche admits the economic impact from the bat soup virus has hit them hard and that they need to make some sacrifices to survive. Their customer racing support of GT3/GTD, GT4, and GT3 Cup Challenge will continue as planned and is not impacted by this decision.

“Porsche belongs in endurance racing”, Enzinger continued. “We will work hard to ensure that this is only a temporary Auf Wiedersehen.” It was only a few months ago that Porsche expressed interest in IMSA’s upcoming LMDh platform. As of now it’s assumed that it’s still on the table given its intended launch date of 2022 (which even that could be delayed). It’s also been believed that LMDh, which requires factory support, would have meant an end to some factory-supported GT programs anyway. Manufacturers that couldn’t justify the cost of both a GTLM/GTE and an LMDh program would have had to make a decision one way or the other. But if anyone was going to do both, it would have been Porsche. 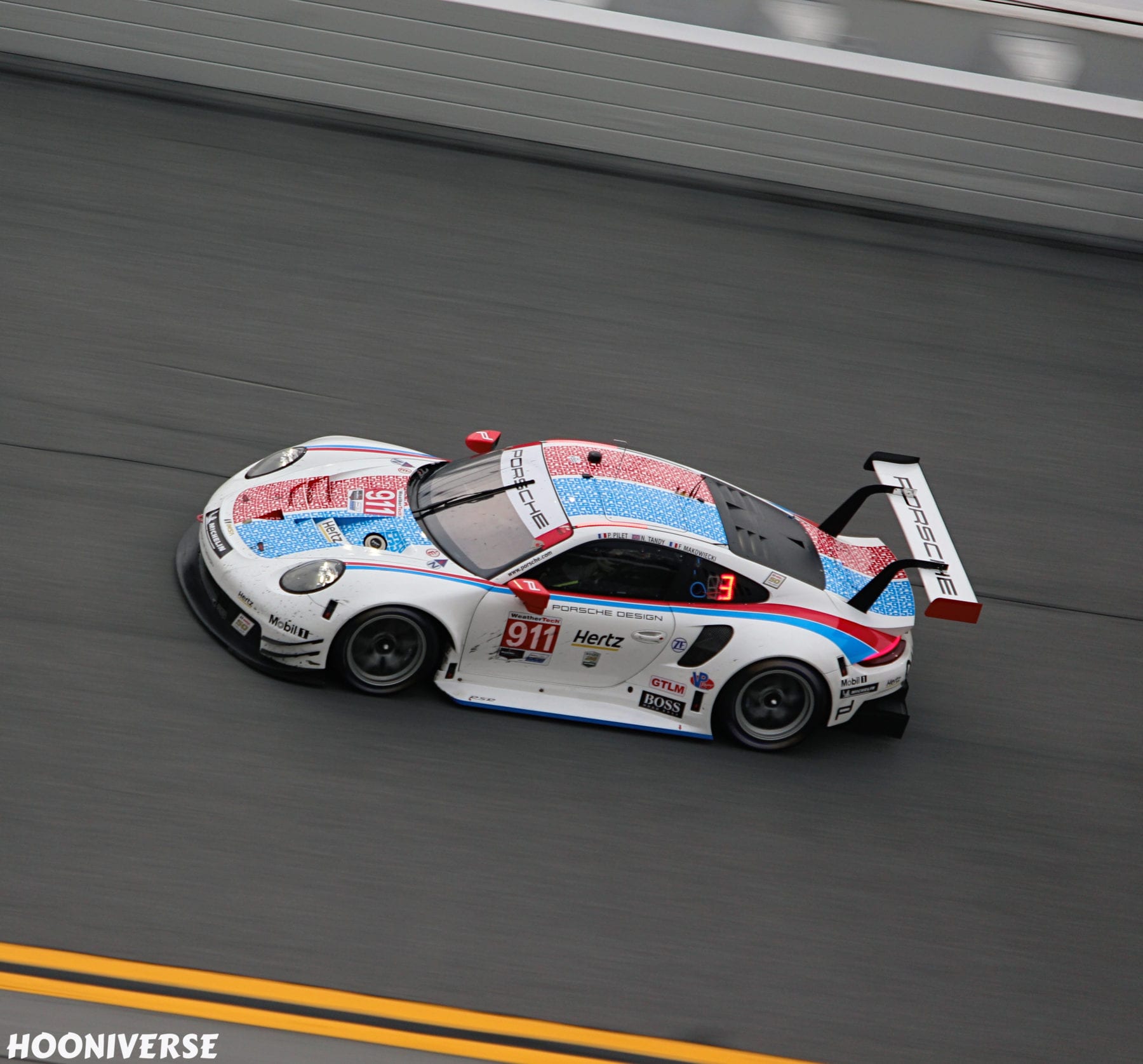 Porsche will continue the rest of the season which will be back underway soon. The future of GTLM looks very grim though. This will leave just BMW (who has already pulled the M8 GTE out of WEC after just one season), Corvette, and Ferrari via Risi Competizione (who don’t even run the full schedule anymore). There is still the possibility of a so-called “GT convergence” which you can read more about at Sportscar365. With GTLM waning in America and GTE in Europe at risk of going down the same path, this could be the answer.

If you want to catch a final glimpse of Porsche’s incredible 911 RSR, IMSA has a revised schedule posted. You’ll have several opportunities this year. GTLM has been consistently the most exciting race you can find anywhere.

Report: Mazda 3 is getting boosted

It’s not all doom and gloom and ugly fucking cars today. An exciting report from Jalopnik suggests that the Mazda 3 is getting a turbocharged model this year. They obtained dealership model codes from a reliable source which show Mazda3s apparently getting some turbo variants, including one in particular that’s of great interest.

One is listed as “MAZDA3 HB PP TURBO”, where HB stands for hatchback, PP could stand for Performance Package, and TURBO stands for fuck yeah son it’s getting turbocharged. Jalopnik also noted that all turbo models are listed as having a six-speed automatic. There’s only so much we can deduce from dealership codes though, so we’ll just need to wait for the rest. 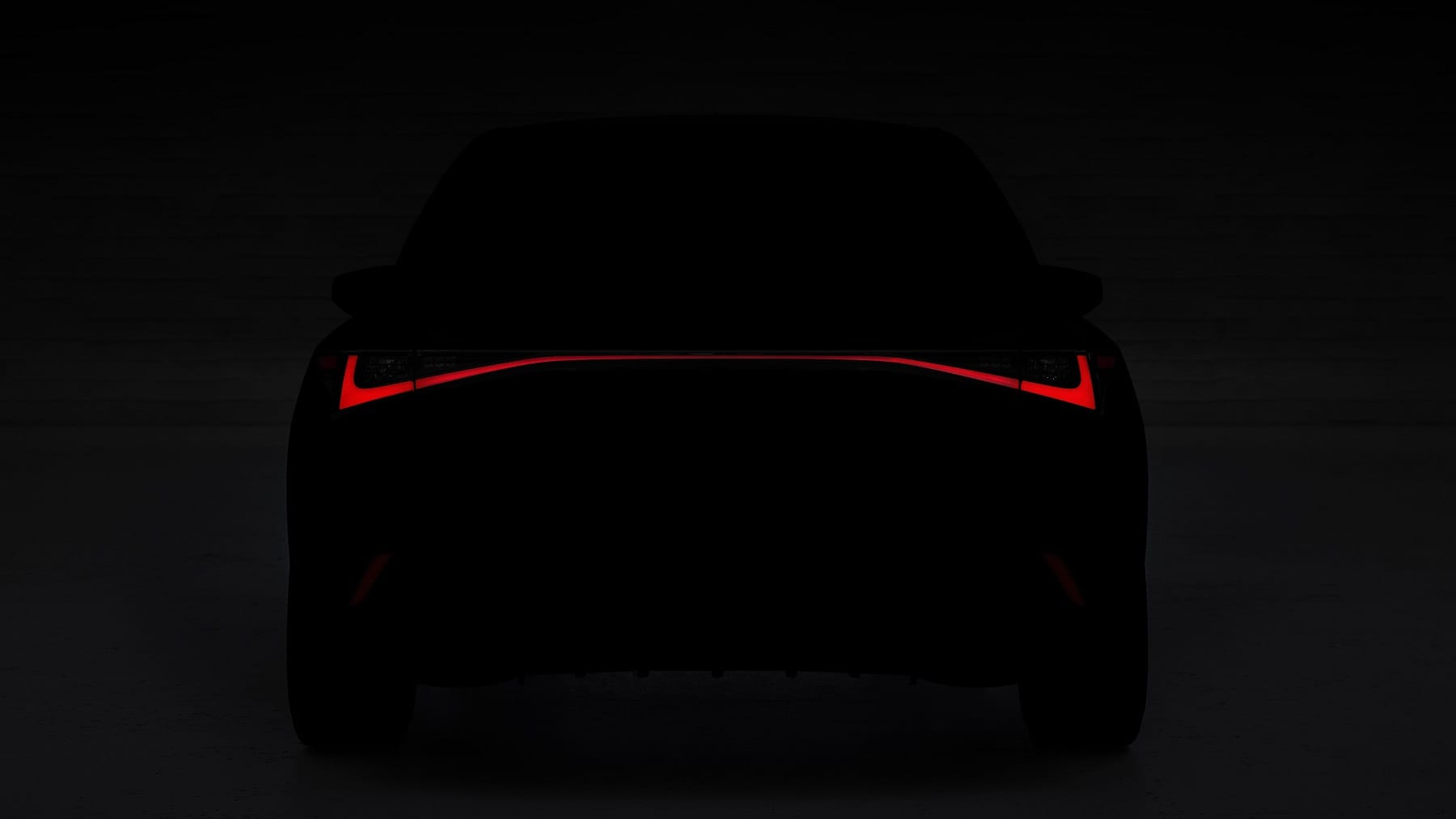 More good news in the pipeline is that Lexus hasn’t forgotten about the IS. More importantly, they’re letting it live after the demise of the GS. The compact luxury sports sedan has been a staple for Lexus for decades and we’ll soon be seeing a brand new one. By soon I mean next Tuesday. No details regarding the car have been revealed at all. But it’s a legendary sedan that’s getting a new life in a world where many others don’t. We’ll bring you more when we have it.