Welcome to the Hooniverse News! As always, this is a weekly recap of the biggest stories in the automotive industry without the fluff or bull. This week we have the all-new Ford Explorer, Lamborghini Huracan Evo, Porsche 911 (992) Cabriolet, and some awesome racing liveries coming to a race track near you. 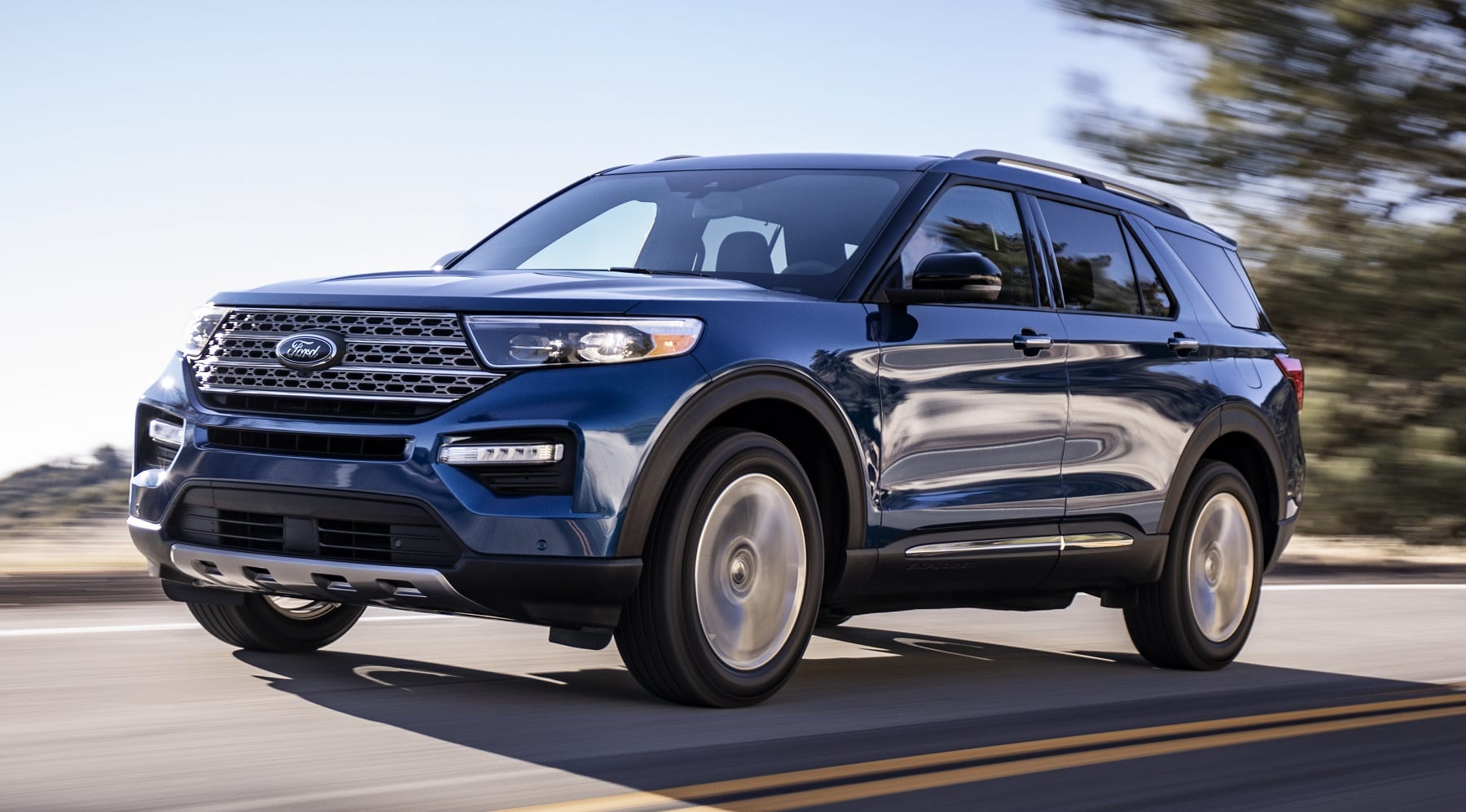 Did you know that Ford sold 457,000 cars in 2018? Those are the kinds of numbers most other manufacturers would kill for, but for Ford that just wasn’t cutting it. It’s a 17% drop from the year before and it will certainly keep declining as Ford lets their aging lineup die a slow miserable death while others eat their lunch, but that’s roughly 380,000 units that Ford is perfectly happy to let slip away (adjusted to exclude Mustang sales which survived Ford’s carpocalypse).

They’re so confident in their world-beating SUV and pickup sales that they’re willing to give up almost everything else. It’s no wonder then that they put so much effort into this, the all-new Ford Explorer. Arriving this summer, it’s the most dramatically recreated Explorer since it turned into a slightly bigger Edge in 2010.

It sure was nice of Ford to include this image so we can see exactly where it all went wrong.

I was one of the ones up in arms over that redesign, but it’s hard to deny how smart of a move that was. A quick drive through suburbia and you see more of these things than you can shake a dead Fiesta ST at. It’s become the family SUV in terms of all-time sales. And with car sales going away, that’s a trend Ford would prefer to continue. 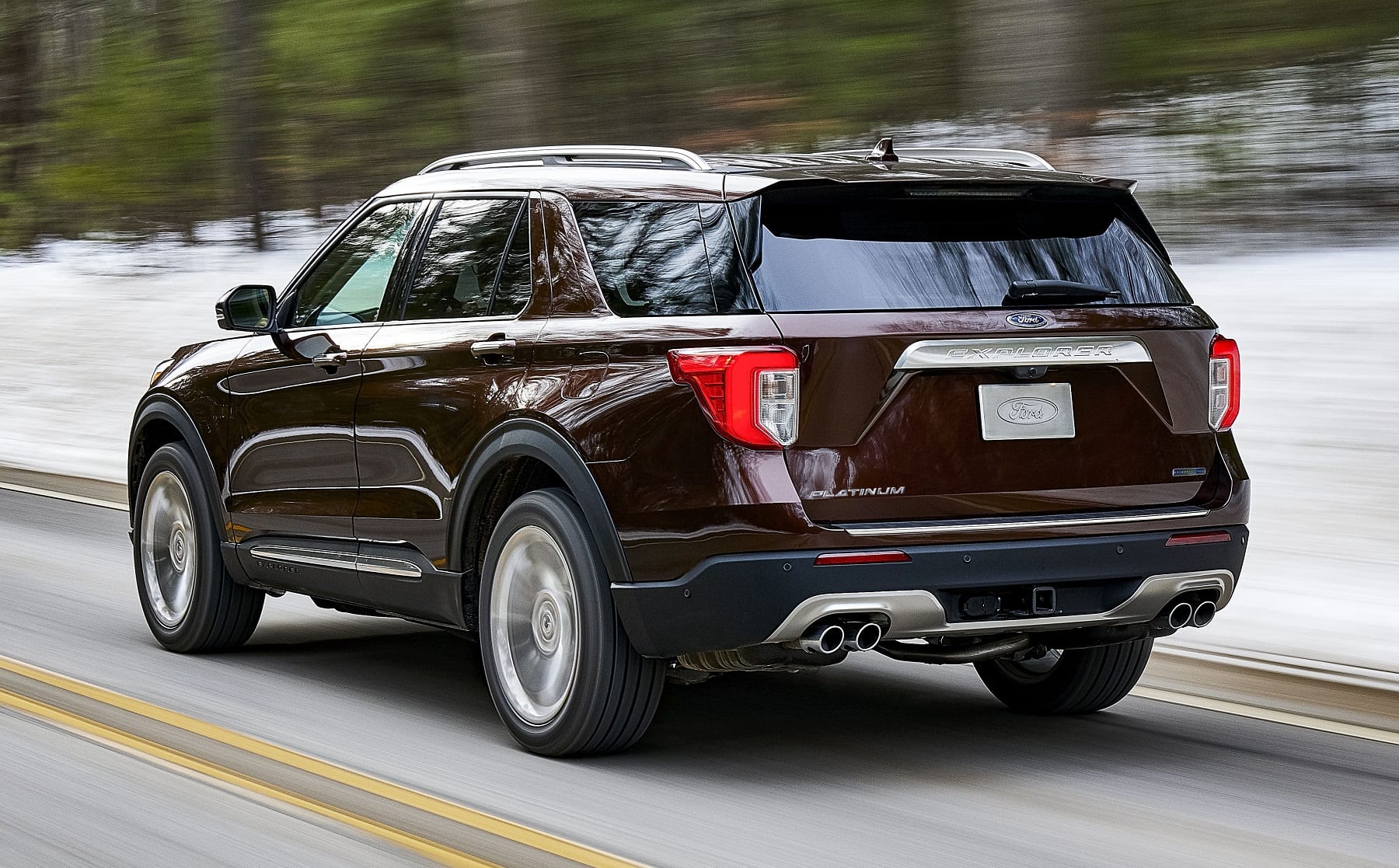 This substantial redesign starts with an all-new rear-wheel-drive architecture that lends to a lighter (by at least a hundred pounds depending on the model), stronger construction, and expanded capabilities. Two of the latest EcoBoost engines, a new optional AWD system with a more comprehensive Terrain Management System, and Ford’s latest ten-speed automatic transmission are at the core of its improved performance. 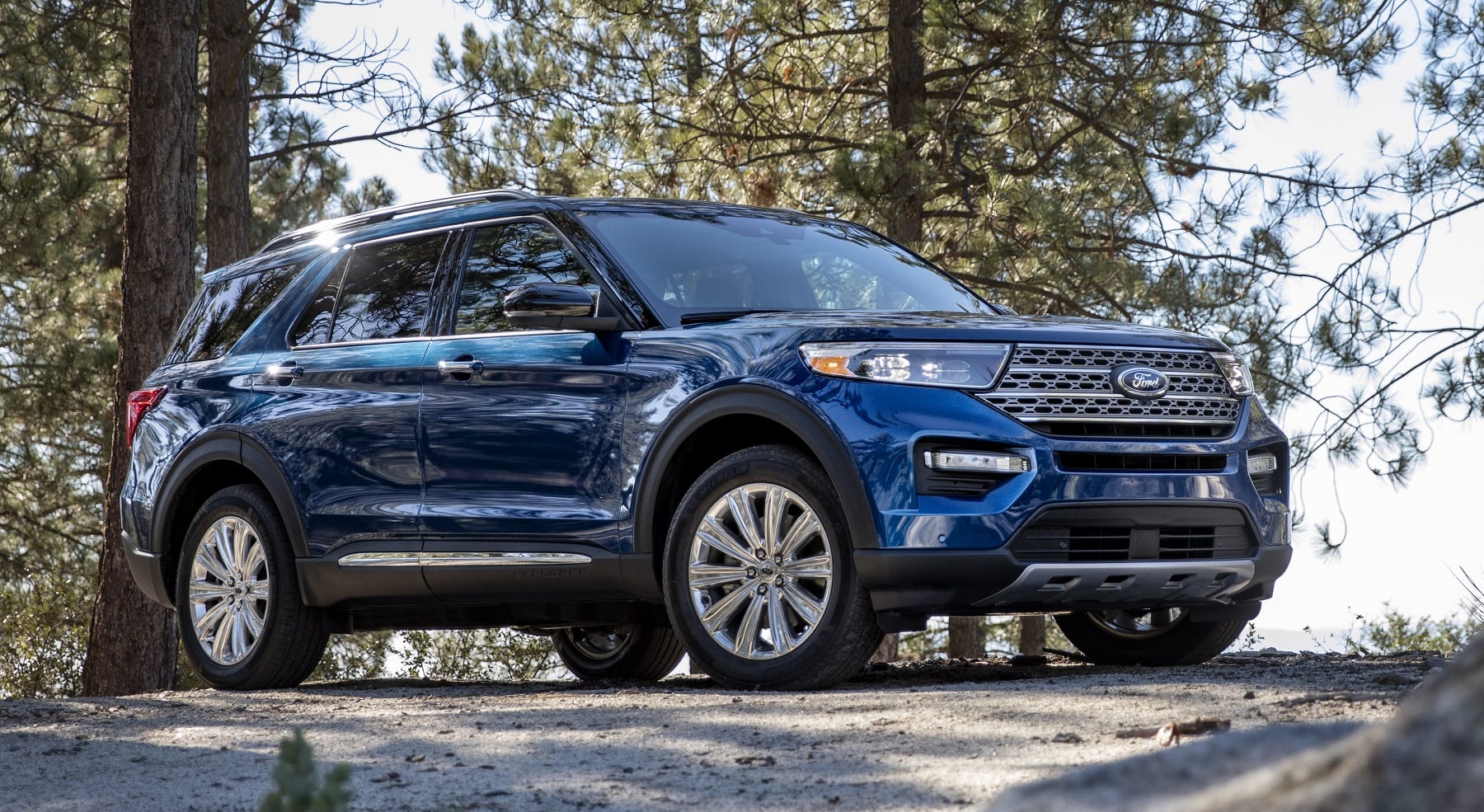 In the unlikely event that someone actually buys an Explorer for towing, they’d be pleased to know the RWD Explorer can tow 5,600 pounds with the 3.0-liter V6 or 5,300 pounds with the 2.3-liter I-4 (the latter when equipped with the Class III trailer package). That’s a significant increase over the outgoing model. But as our good friend Joel Feder from MotorAuthority pointed out, the new 365-hp Explorer’s towing capacity is rated for just 100 pounds more than the 155-hp 1991 Explorer’s towing capacity.

Another big focus for the new Explorer is improving life inside. There’s more space as the Explorer gains seven inches in its wheelbase and there’s a lot more tech, as is expected. There’s 4G LTE (also known as 5G if you’re on AT&T) connectivity for up to ten devices, a wireless charging pad, up to four powered USB ports (including new type-C outlets), up to three 12-volt outlets, and a 110-volt outlet. 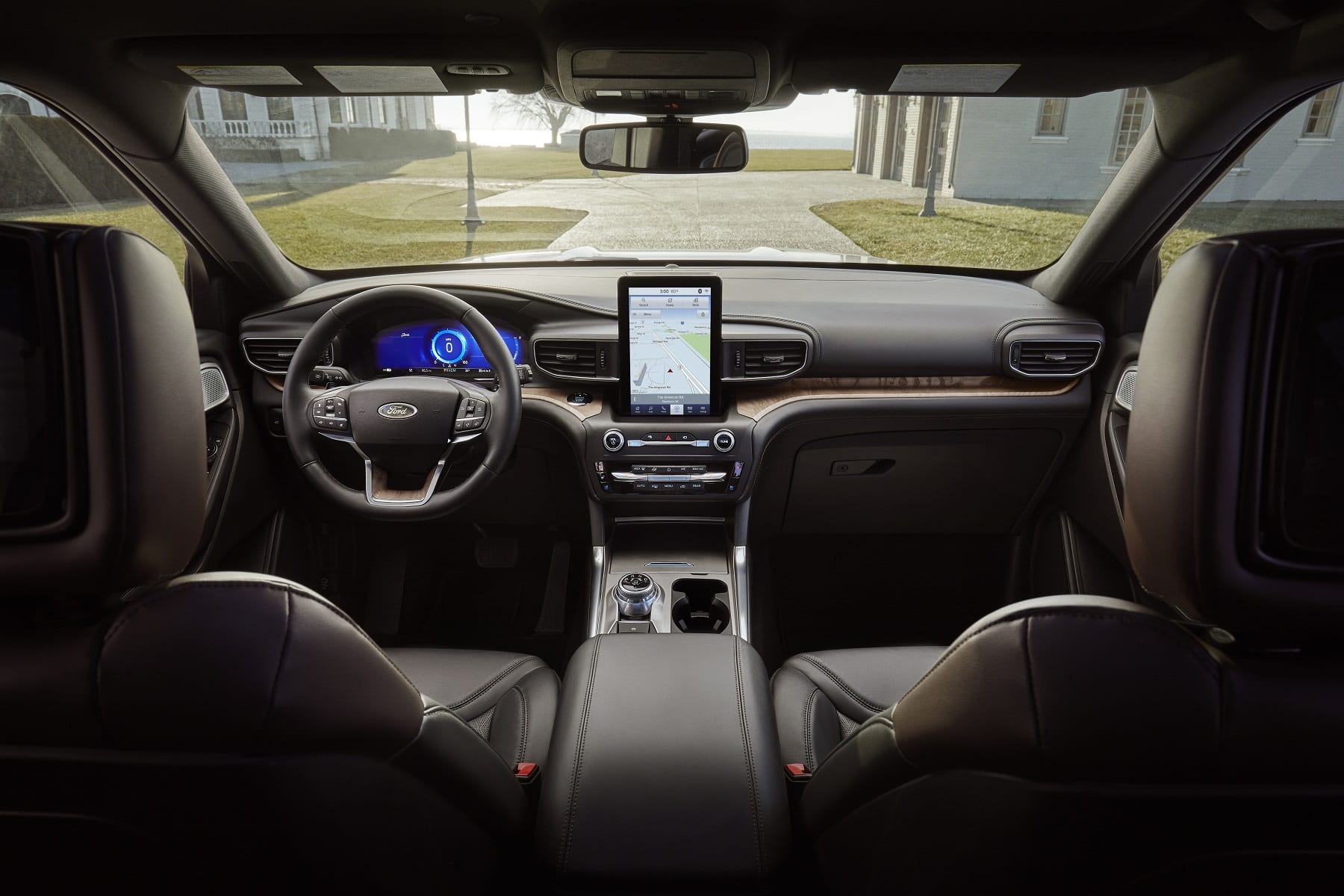 The premium audio option is a 980-watt, 14-speaker B&O system and the standard Sync 3 system has Apple CarPlay and Android Auto compatibility. And because everything has to be like a stupid iPad for it to be cool, the 10.1″ center infotainment screen is now in portrait orientation. But it’s not integrated cleanly like it is on a Tesla or a new Ram. It just sticks out like someone stuck a tablet on their dashboard phone mount. Some people just want to watch the world burn.

It also gets a host of new safety features that are packaged in its Ford Co-Pilot 360 suite, including Pre-Collision Assist with Automatic Emergency Braking, Blind Spot Information System with Cross-Traffic Alert, Lane-Keeping System, Rearview camera with built-in lens cleaner, and Auto headlamps with auto high-beams. Many more safety features are optional, like Adaptive Cruise Control with speed sign recognition.

The Explorer lineup now features standard, XLT, Limited, Limited Hybrid, ST (siiiiiigh), and Platinum models, so there may be some variation with engine outputs across some models. Yep, there’s gonna be an Explorer ST to replace the Explorer Sport now. 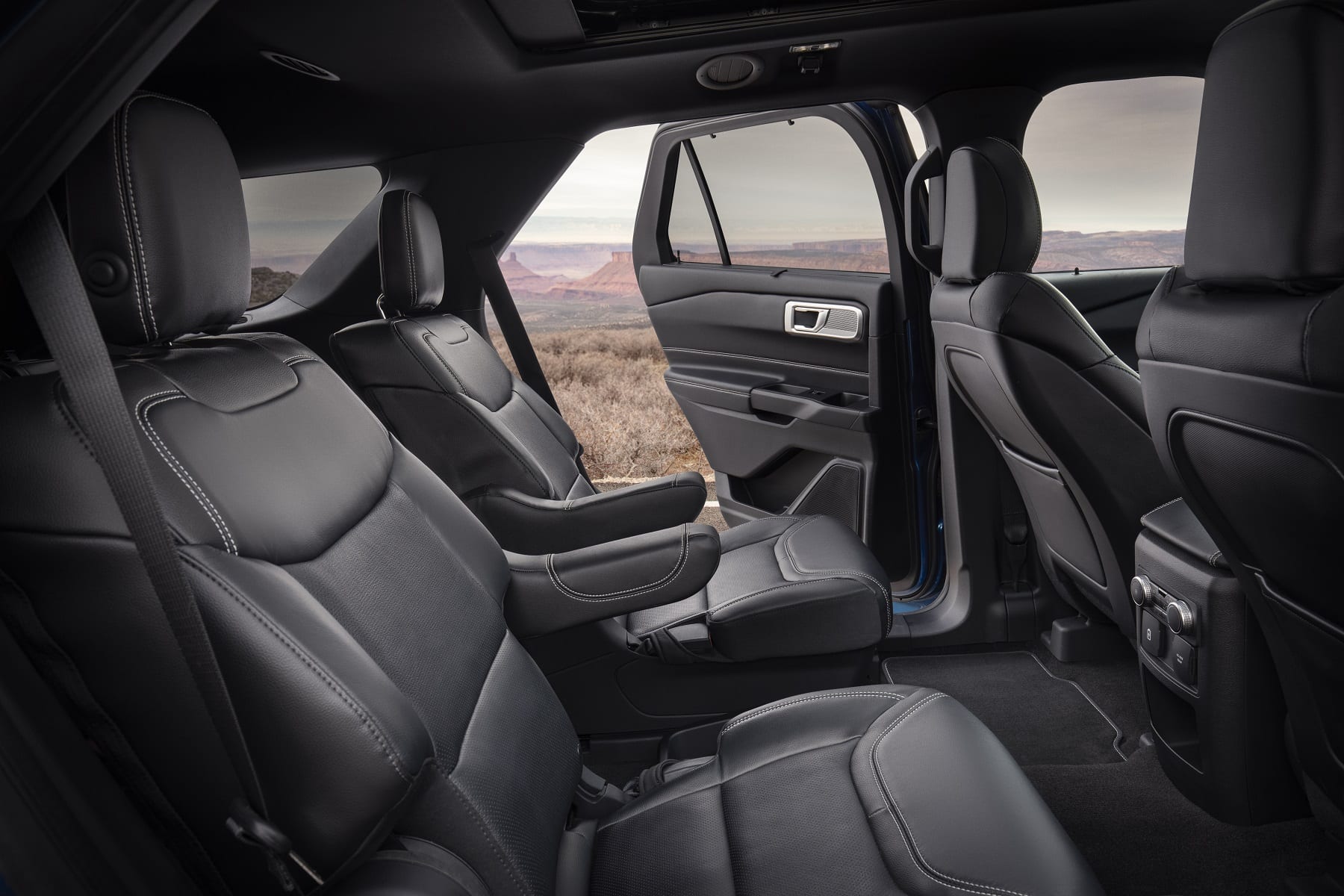 Without explicitly stating pricing for all the models, Ford says the starting price will be just $400 more than the current Explorer. That means it’ll start at around $32,500 in its most basic specification which still boasts a dozen or so new features. It’s a winner on paper and no matter how… odd the styling seems to be they’ll still have trouble keeping them on dealer lots.

Get ready for the new face of suburban America this summer. 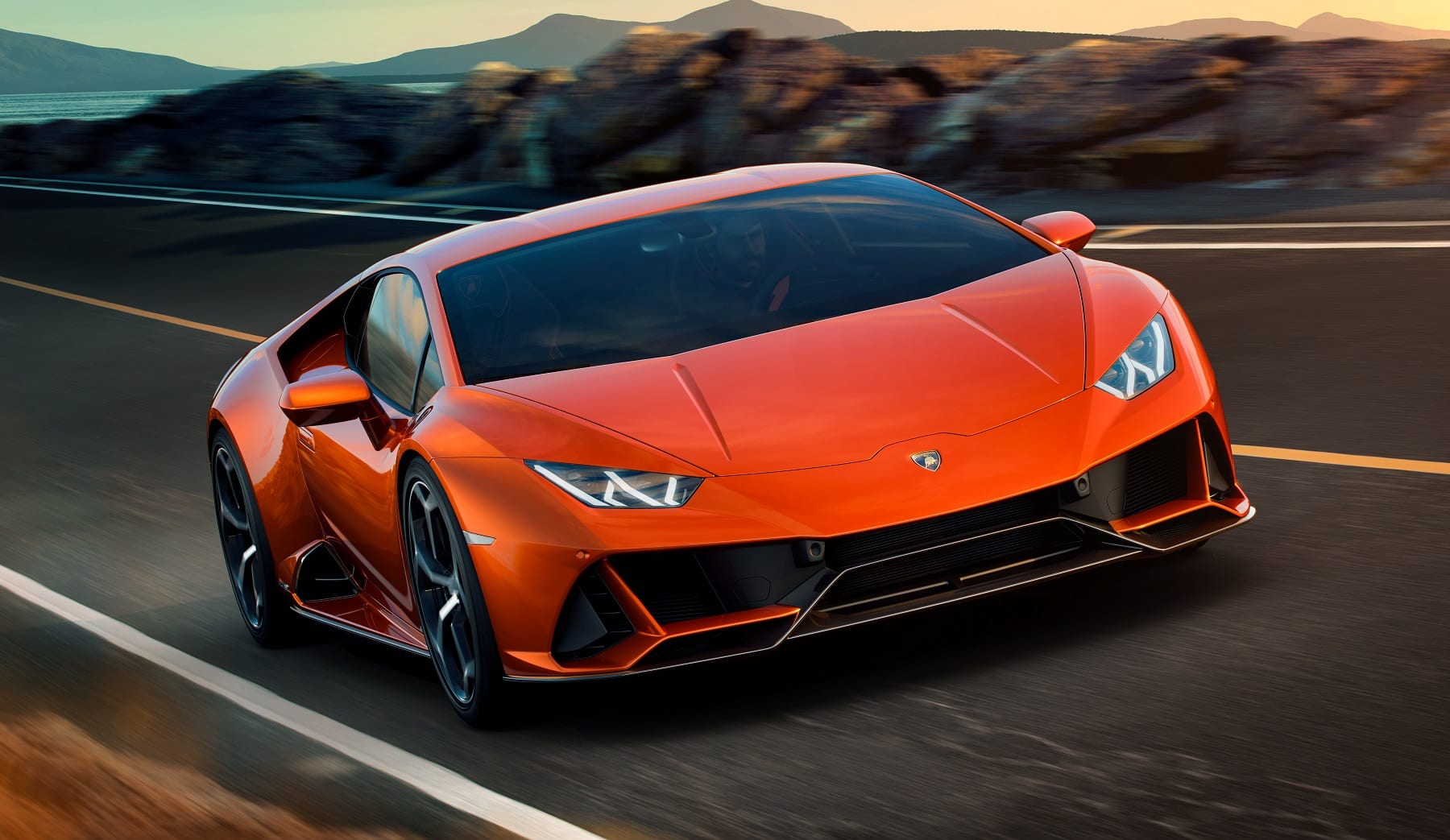 The Lamborghini Huracán has been through nearly as much product development in its lifetime as you’d expect from a 911. It’s gotten the mandatory spyder version, a RWD version, and a couple high(er) performance versions that even nabbed a Nürburgring lap record for a couple months. But as far as supercars go, the basic Huracán is a bit long in the tooth. This addresses that.

Lamborghin announced the Huracán EVO this week, a face-lifted and reworked Huracán that borrows nomenclature from their GT3 program to indicate how much of an improvement it really is. As their CEO puts it, “it takes the extraordinary abilities of the Huracán Performante and combines state-of-the-art vehicle dynamic control to amplify the everyday Huracán driving experience”. 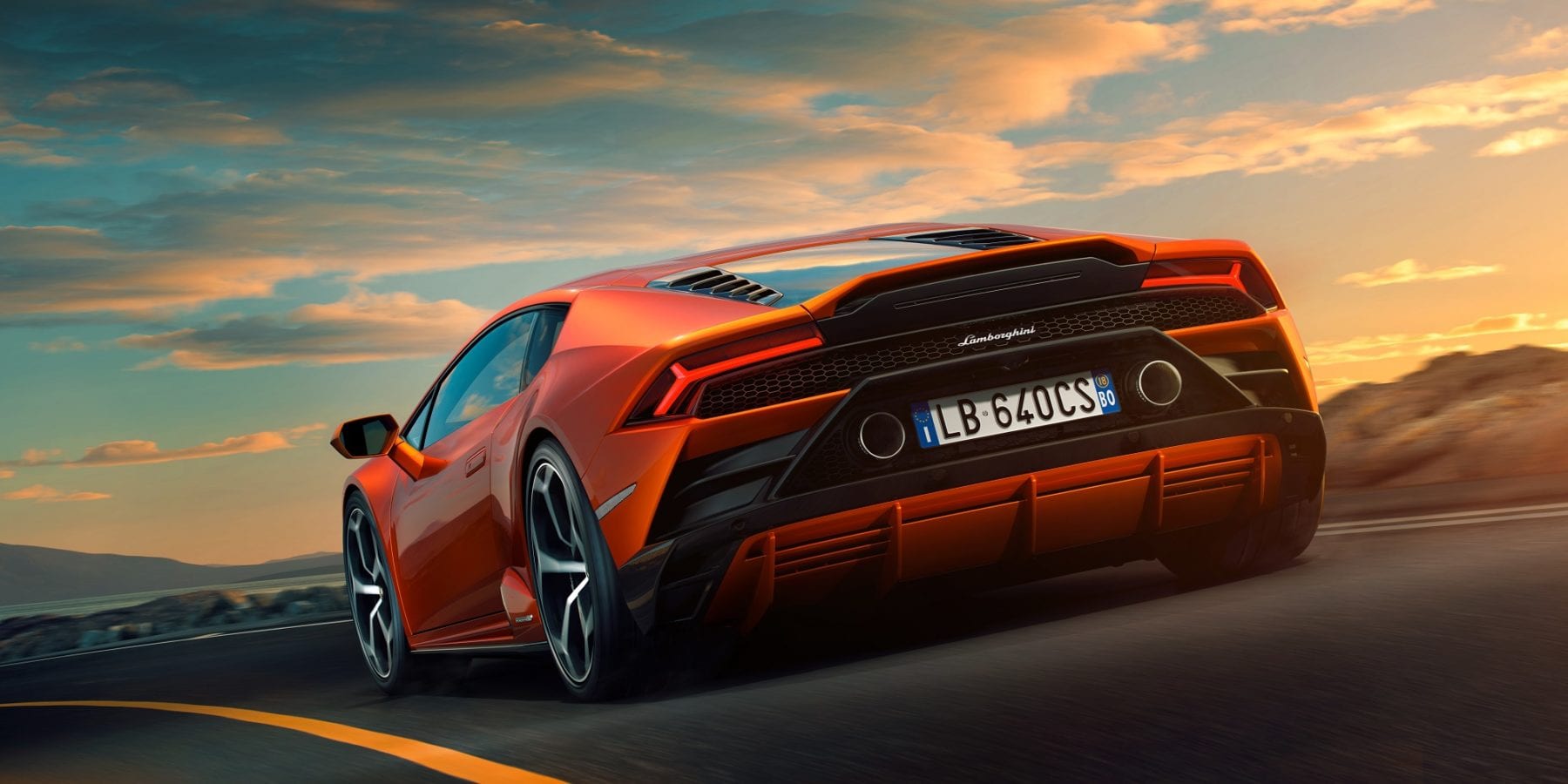 It begins taking said extraordinary abilities of the Performante by asking to borrowing its engine and never returning it. That means a wonderful 5.2-liter V10 with 630 horsepower and 443 lb.-ft. of torque with titanium intake valves and refined lightweight exhaust.

But because there’s more to a Lamborghini that just straight line speed, they gave it a more powerful computer to get the most out of the car’s impressive hardware. It’s called Lamborghini Dinamica Veicolo Integrata and it “controls every aspect of the car’s dynamic behavior, fully integrating all of the car’s dynamic systems and set-up to anticipate the next move and needs of the driver, interpreting this into perfect driving dynamics”.

Anything electronic that relates to handling is updated to improve performance, including its magnetorheological suspension and even the suite of accelerators and gyroscope sensors placed at the car’s center of gravity to manage it. Rear-axle steering and four-wheel torque vectoring is also new.

The boost in performance is what drivers will notice first, but us plebs will be distracted by the new styling that’s driven by aerodynamic improvements. It has a new front bumper with enlarged air intakes complete with the “Ypsilon” shape Lamborghini can’t get enough of, new wheels, new side air intakes, and a dramatically reworked rear fascia that draws the most from its GT3 counterpart. The exhaust has been positioned high up in the car’s rear bumper and there’s an integrated, slotted spoiler.

Its underbody is also new with aerodynamics in mind. All these changes improve downforce and aerodynamic efficiency “more than five times” over the original Huracán. I’m sure there was some scientific approach to coming up with that figure, the context of which would help it make more sense. But I’m just sitting here nodding my head in approval as I pretend to know what that means.

The new and improved Huracán EVO starts at $261,274 and launches this spring. 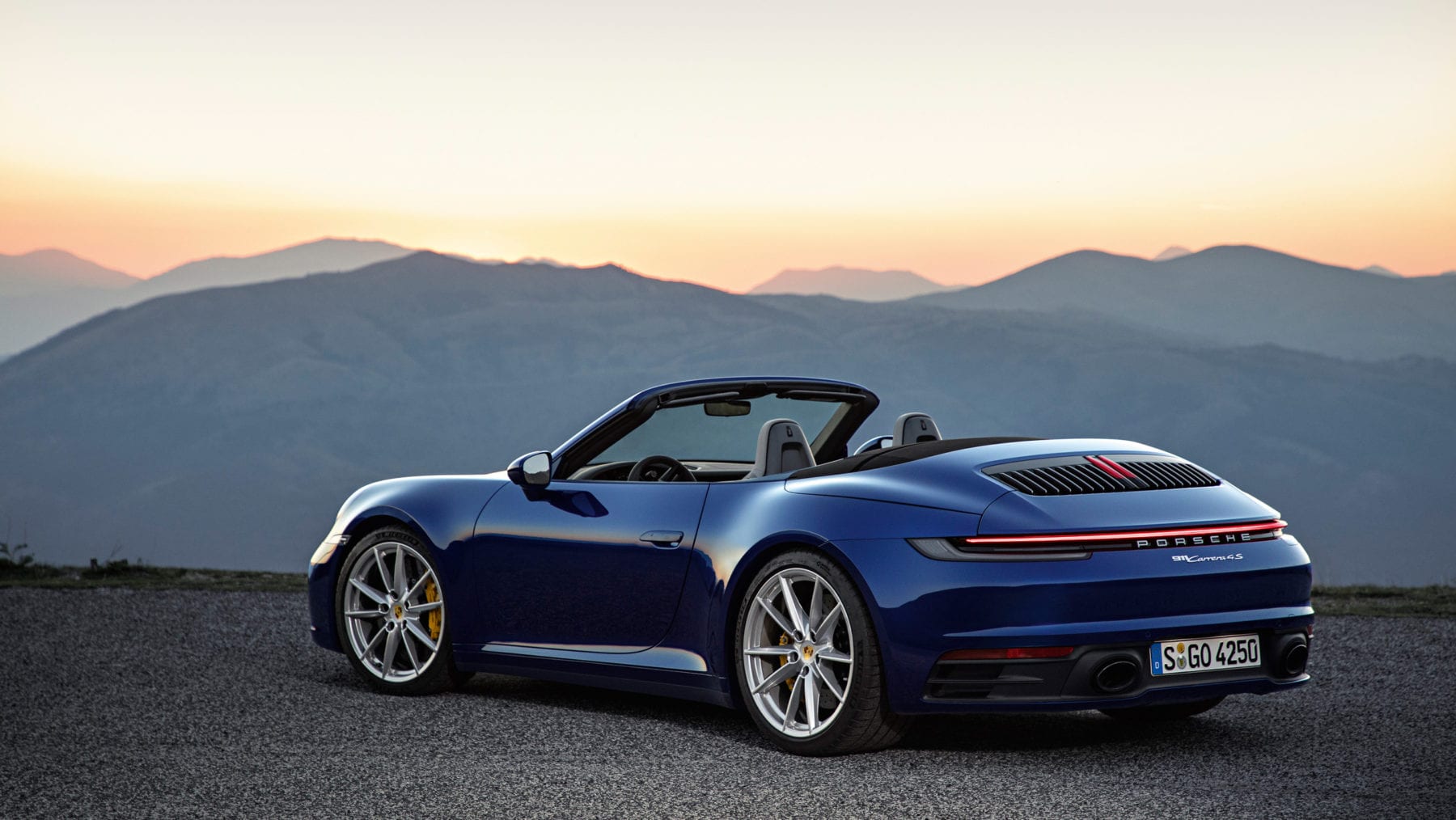 Ford Finally Does a Heritage Livery for the GT in IMSA 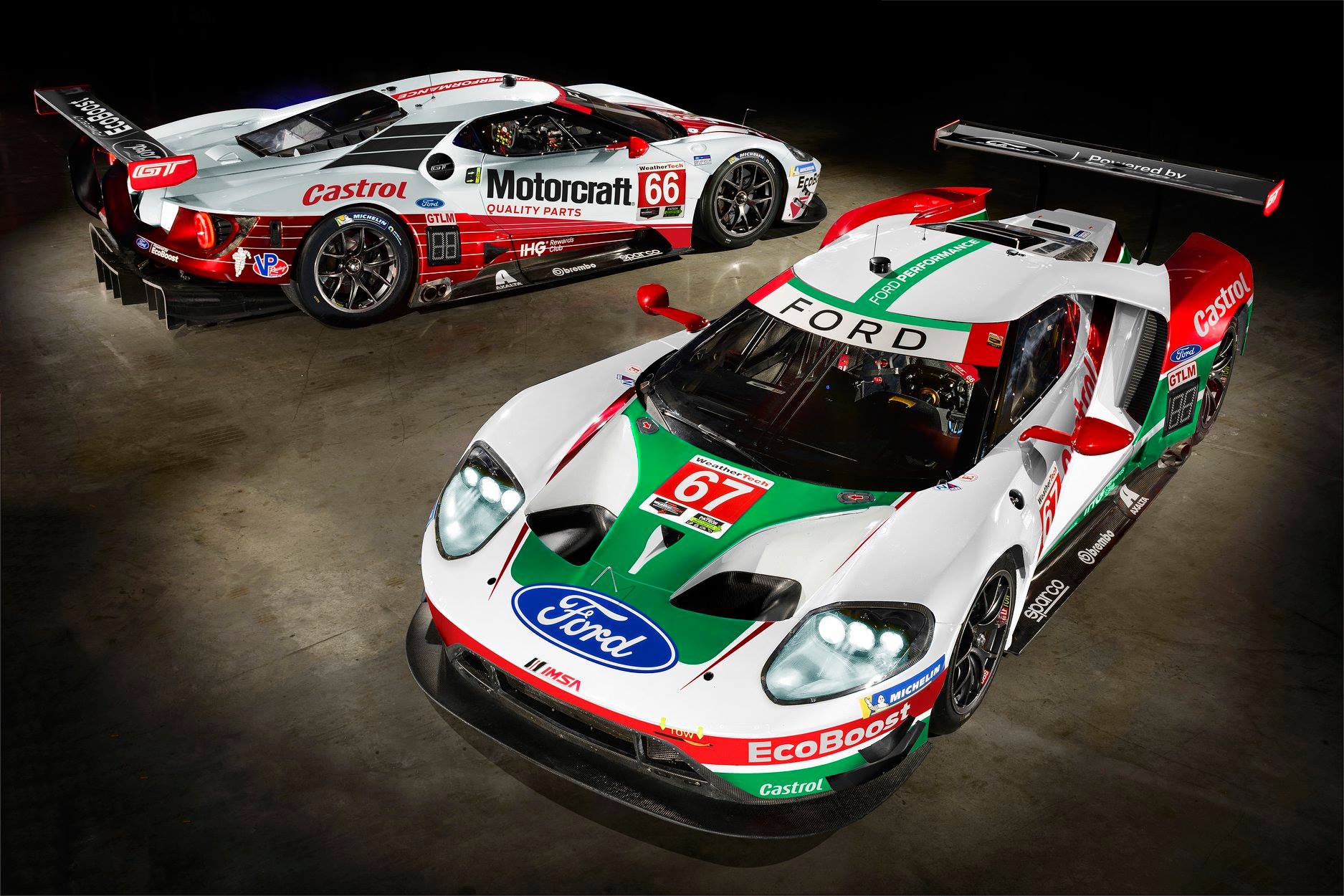 Since the day Ford started racing the GT in IMSA’s GTLM class and WEC’s GTE class to coincide with their 50th anniversaries of each of their four GT40 Le Mans victories, they’ve been missing a huge and unbelievably easy opportunity. Heritage themes are pretty common throughout the racing community and are a great way to build hype around the brand. A ton of manufacturers have done this for the bigger races in a given season… except for Ford with their GT program.

If you (are allowed to) order a Ford GT street car, you can select a Heritage Edition with a custom paint scheme to commemorate the GT40 that won Le Mans 50 years prior. It would have been a no brainer to do that simultaneously for the race car. Make car number 66 run the same paint scheme of the GT40 that won in 1966 and so on. But no, they had to run both cars with the same EcoBoost livery for three straight seasons until even Ford Performance fans like myself got bored of it. This marketing opportunity couldn’t have been more obvious if it farted in an elevator.

But now that the GT is likely entering its final season in sports car racing (though that’s not confirmed), they’re finally getting with the program. Ford will run two awesome heritage liveries on both GTs during this year’s Rolex 24 at Daytona. It also coincides with IMSA’s 50th year so they pretty much had to.

The No. 66 Ford GT of Joey Hand, Dirk Müller, and Sébastien Bourdais will wear the colors of the Roush Racing Motorcraft Ford Mustang that John Jones, Wally Dallenbach Jr. and Doc Bundy drove to a GTO victory at the Rolex 24 At Daytona in 1985. Jones won the IMSA driver’s championship title in the GTO category after dominating the competition that year.

The No. 67 of Richard Westbrook, Ryan Briscoe and Scott Dixon will carry a throwback tribute to current race team partner Castrol. The iconic green and red stripes are accented with the Castrol Edge logo and adapted to the Ford GT’s lines.

So enjoy these epic liveries while you can. The normal liveries go back on after the race.

See, Acura knows what’s up. They’re doing a throwback livery for their pair of ARX-05 DPI cars but they’re keeping it for the whole season.

The white, orange and black colors are synonymous with Acura’s racing history and was first made famous by Acura’s three-time consecutive championship-winning program in IMSA prototype competition from 1991-93. The livery’s transition from the old Comptech Racing Spice Acura NSX to the new ARX-05 works surprisingly well.

Their all-star lineup will again consist of Dane Cameron, Juan Pablo Montoya, and Simon Pagenaud in the #6 and Helio Castroneves, Ricky Taylor, and now Alexander Rossi in the #7.

Subaru Brings Back the Blue and Yellow 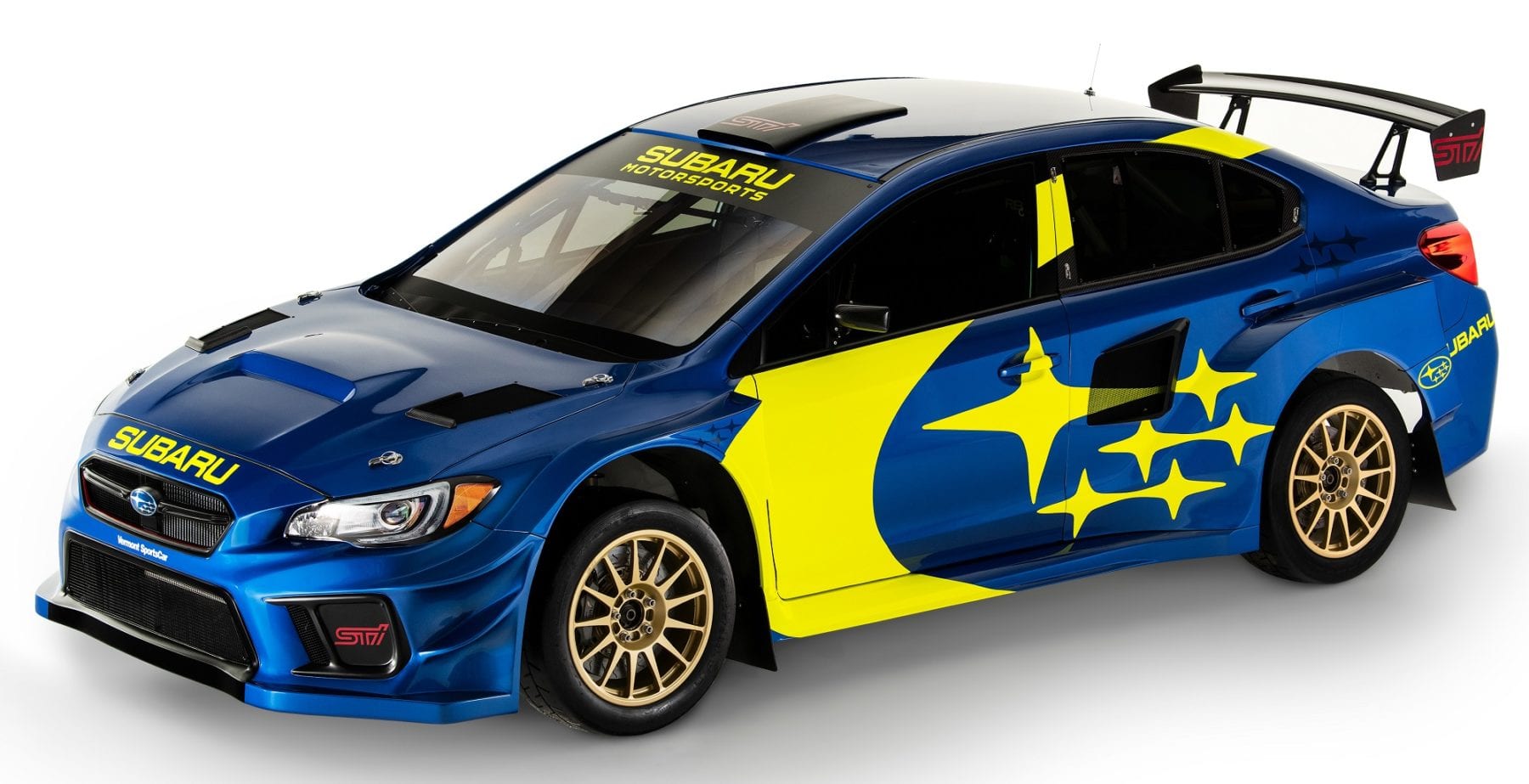 Let’s keep the heritage livery train rolling with one that will make old school rally fans giddy with excitement. For Subaru of America’s 2019 motorsport season, they’re bring back the brand’s signature WR Blue Pearl paint with a yellow star cluster graphic on top of gold wheels. Just as it should be.

The iconic look was made famous by the world-beating Subaru World Rally Team cars of the 1990’s and 2000’s and will be formally unveiled at the North American International Auto Show next week.

The announcement coincides with a bit of an organizational announcement. Going forward, all U.S. racing activities including stage rally, rallycross, record attempts, off-road racing, and circuit racing will operate under the banner of Subaru Motorsports. They’ll continue to keep Subaru racing alive in the states and make it just a little bit more recognizable.

Subaru Motorsports will debut the new competition livery and launch its 2019 ARA title defense at Missouri’s Rally in the 100 Acre Wood, March 15-16.