Welcome to the Hooniverse News! As always, this is a weekly recap of the biggest stories in the automotive industry without the fluff or bull. This week: Aston Martin gives us more DBS Superleggera greatness, RTR unveils an F-150 package, and Ford invests big in Rivian. Plus your automotive news! 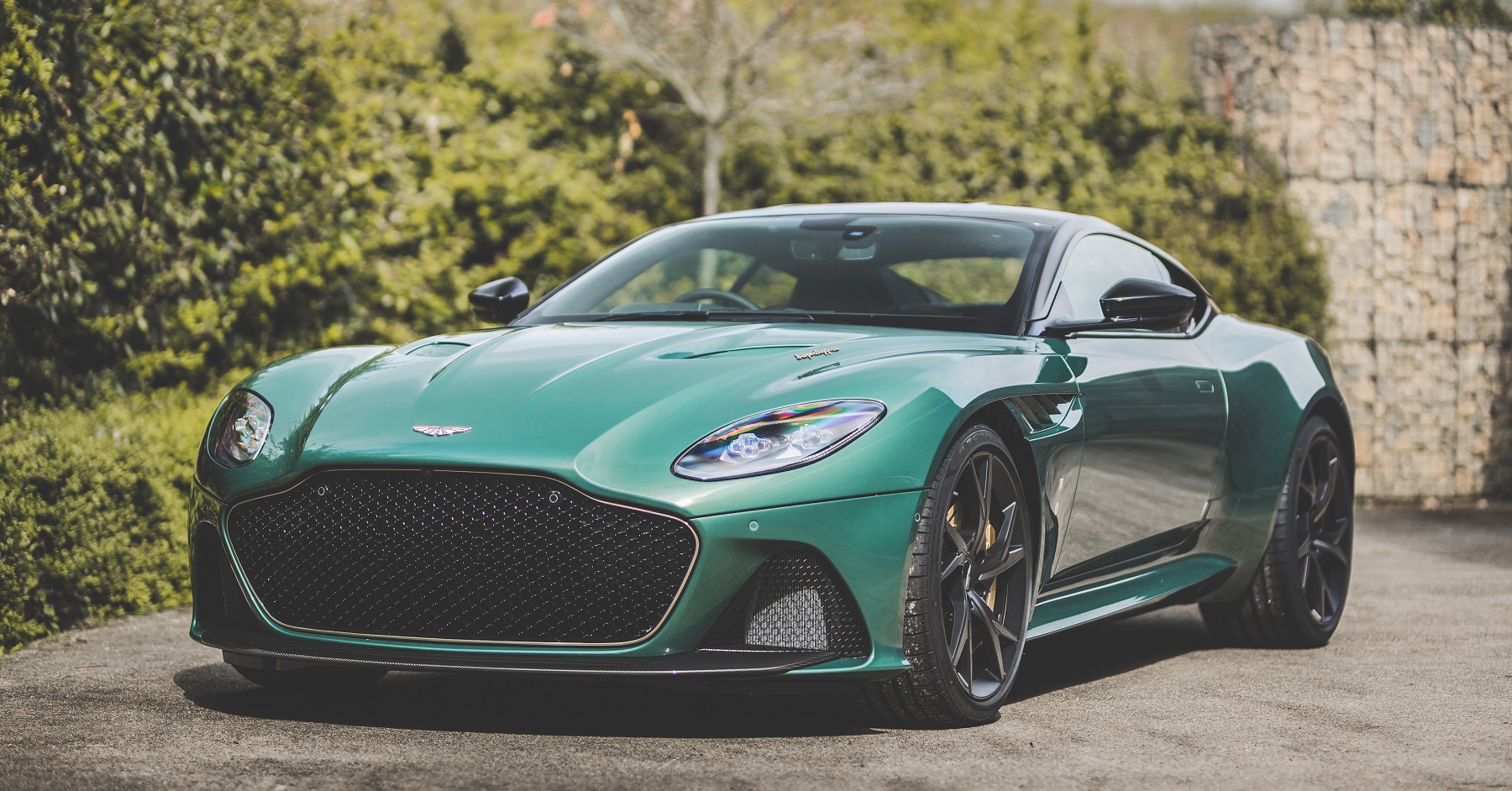 The Aston Martin DBS Superleggera has been out of the news for quite some time. Turns out you can wait a while before releasing a new version of a car when literally everyone in the motoring press praises it for being the greatest thing on earth. It’s so good that I can’t think of a single bad thing I’ve heard about it. Religions are probably being formed over this thing. Aston Martin, being the generous god it is, has decided it’s time to do more righteous stuff with it.

Late last week, Aston Martin unveiled a limited edition DBS 59 variant in honor of its victory at the 24 Hours of Le Mans in – you guessed it – 1959. A strict limit of 24 cars were commissioned by Aston Martin Cambridge and completed by  “Q by Aston Martin”, their in-house personalization service. By introducing a few styling queues from the DBR1 which finished 1-2 in the race, they’ve turned an already gorgeous car into… well, this. 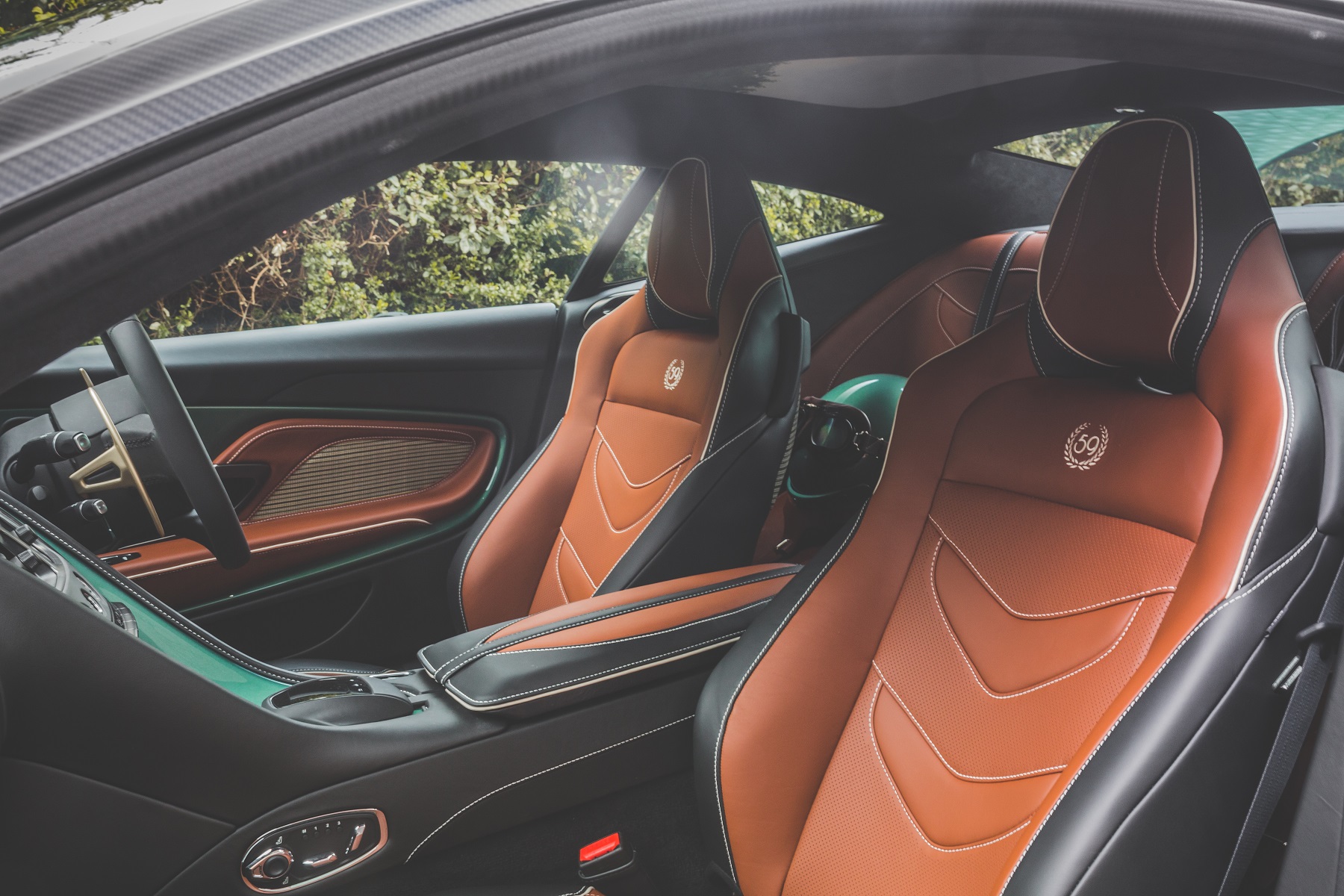 The unique styling touches of the DBS 59 start with Aston Martin Racing Green paint as worn by the DBR1 and contrasting glossy carbon fiber roof treatment. What really helps make this all work so well is the various bronze details inside and out. Things like the grille surround, badges, brake calipers, and paddle shifters are finished in bronze. Those details hearken back to all the bronze switches and dials found in the DBR1.

Demonstrating how detail-oriented these guys are, they threw in a bunch of neat little details as a throwback and went all out on said details. They added custom embroidery on the sun visor which gives the exact date the race took place and notes the 323 laps completed.  If that weren’t nerdy enough, the team at Q went and analyzed original seat material used on the DBR1 and recreated the same weave with each fabric seat back and door insert. Those small details make the Obsidian Black and Chestnut Tan interior just that much better. 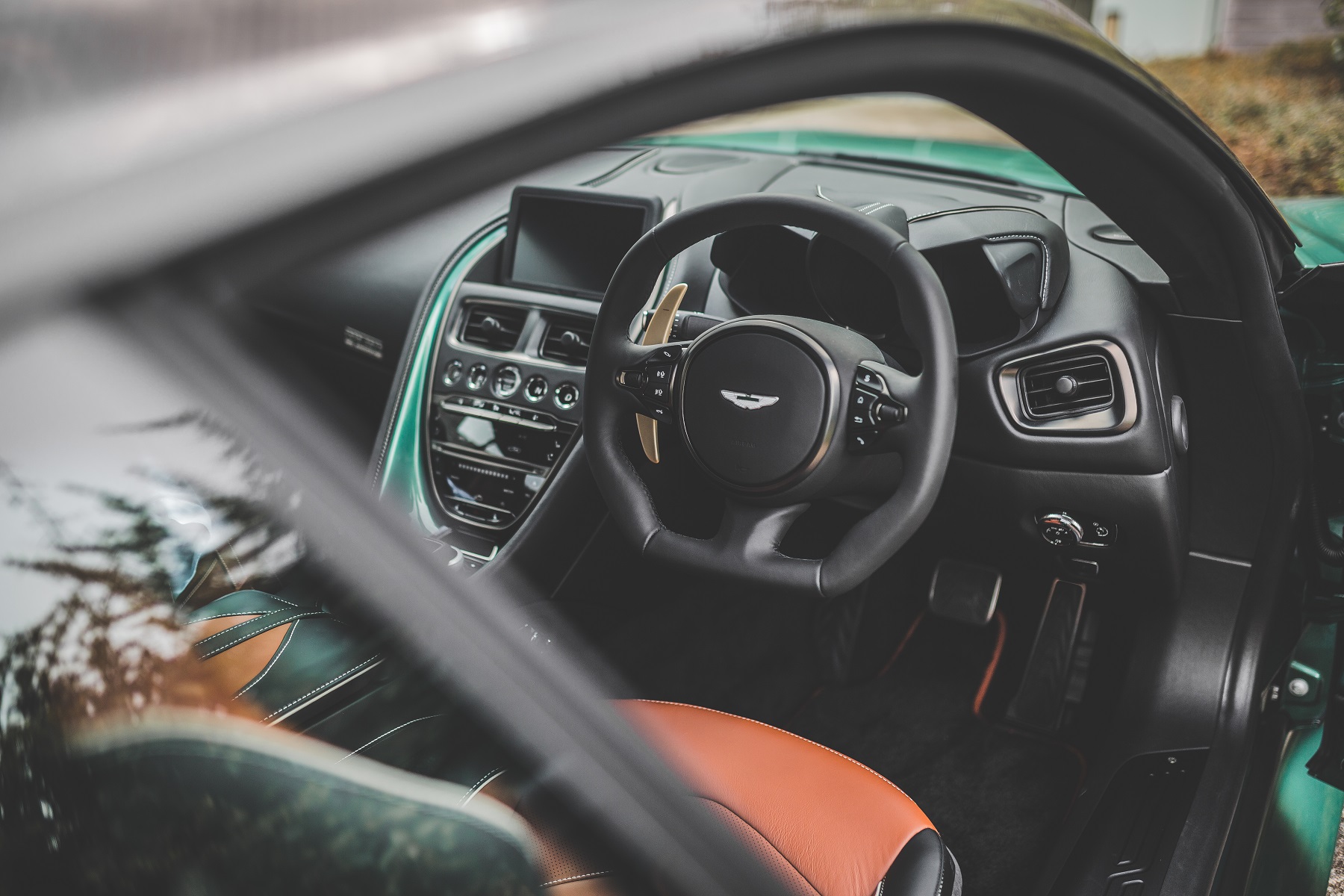 They even throw in a replica heritage racing helmet, 1959 blue race suits, and replicas of Carroll Shelby’s race gloves. Shelby of course shared the winning car with Roy Salvadori while Maurice Trintignant and Paul Frére finished in second place with the sister car.

In short, it’s just… perfect. The Church of DBS Superleggera meets every Sunday in the cigar parlor. 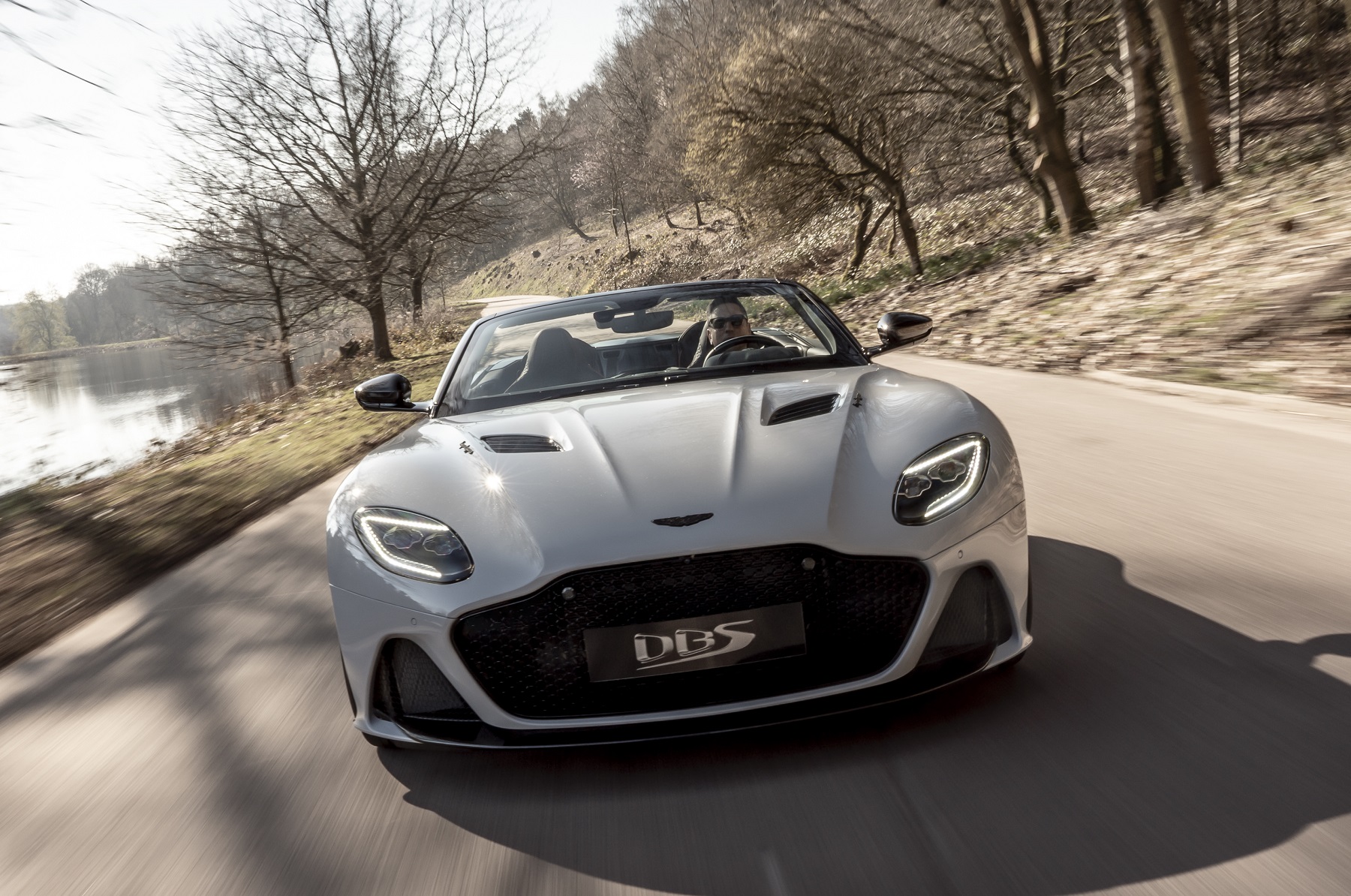 Right, so as expected there’s a convertible version of the hottest, fastest, most powerful road-going Aston currently on sale. They chose to go with a cloth top because they didn’t have to butcher the car’s sleek and gorgeous lines. The cloth takes up less space when stowed and can open in 14 seconds and close in 16 seconds. It also features eight layers of insulation so it’s probably just as quiet as any folding hard top. 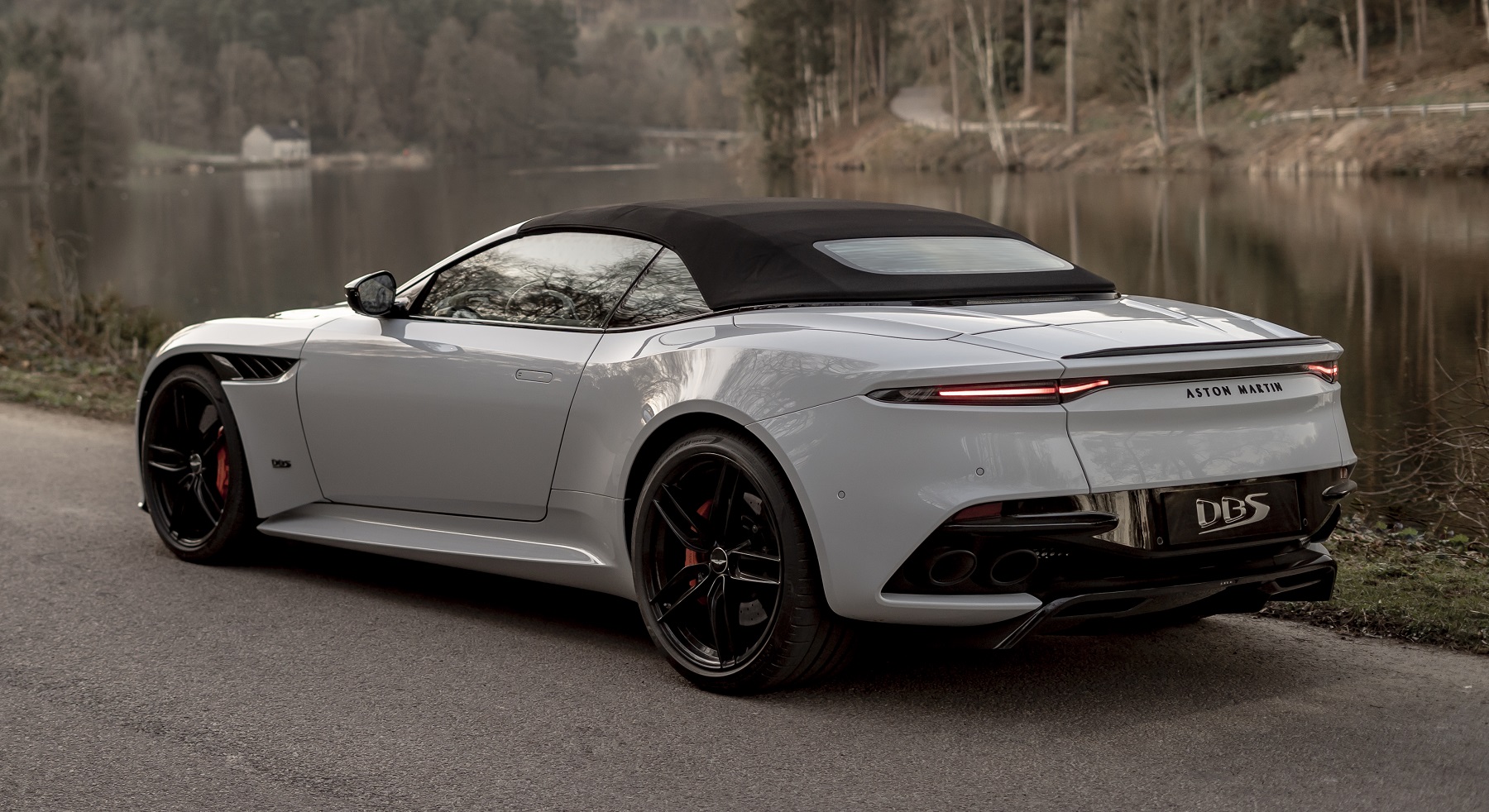 Because the DBS Superleggera is such an extreme performer, bodywork revisions went beyond just chopping the roof off. On top of the numerous aerodynamic elements carried over from the coupe, the Volante requires a revised Aeroblade II solution (how they make extra downforce without large moving spoilers). Despite the dramatic changes to the back half of the car, the Volante produces just 3kg less downforce compared to the coupe’s 177kg.

But when it’s all said and done, it’s an open-top grand tourer with a 715-horsepower twin-turbo V12 that looks sensational. It’s hard to find anything better than that. That’ll be $329,100, please. 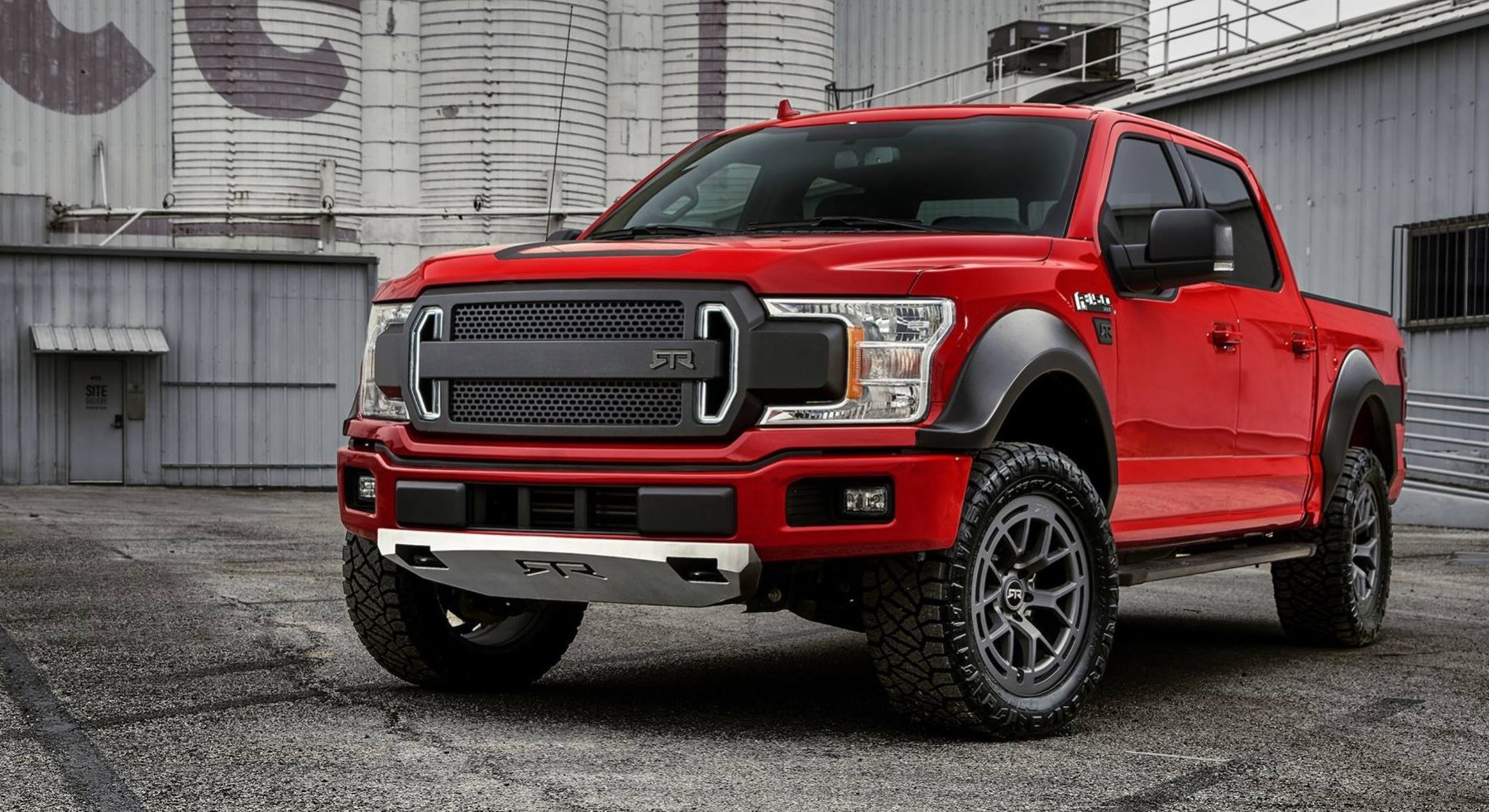 And now for something completely different.

Vaughn Gittin Jr’s RTR brand has been selling visual and performance upgrade packages for Mustangs for several years, but they’re now turning attention to the F-150. They would sell you some F-150 wheels and accessories previously, but as far as I can tell this is the first full RTR package for an F-150.

As with the RTR Mustang packages, it adds some unique styling, reworked suspension, and a new wheel/tire package. The RTR F-150 gets a totally new front fascia complete with their signature LED accent lighting flanking the grille. It also receives a graphics package, fender flares, an RTR skid plate, and 20″ RTR wheels. Fox 2.0 coilovers and shocks and Nitto Ridge Grappler tires give it some off road chops. Meanwhile, Ford Performance cat-back exhaust provides a soundtrack for freedom-loving people everywhere. 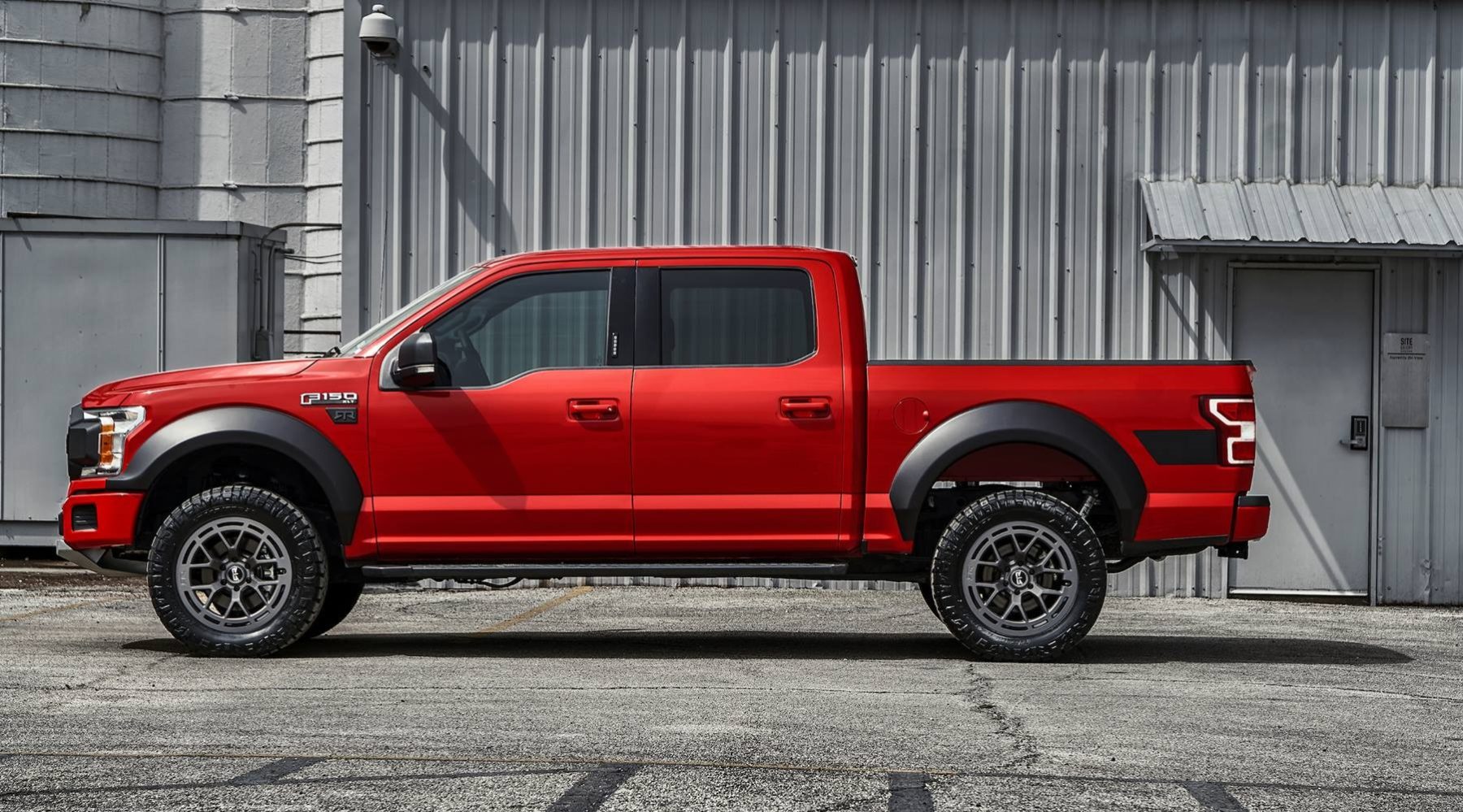 It’s not a terribly big package, but it’s also not a terribly big price. It can be ordered through a Ford dealer on top of any F-150 except the Raptor for an additional cost of $12,750. So depending on the other factory options you pick, you can be out the door with one in the low-to-mid 40s. The Raptor starts at around $53k. This would make sense for buyers who need a truck but are more, shall we say, realistic about their off-roading ambitions. 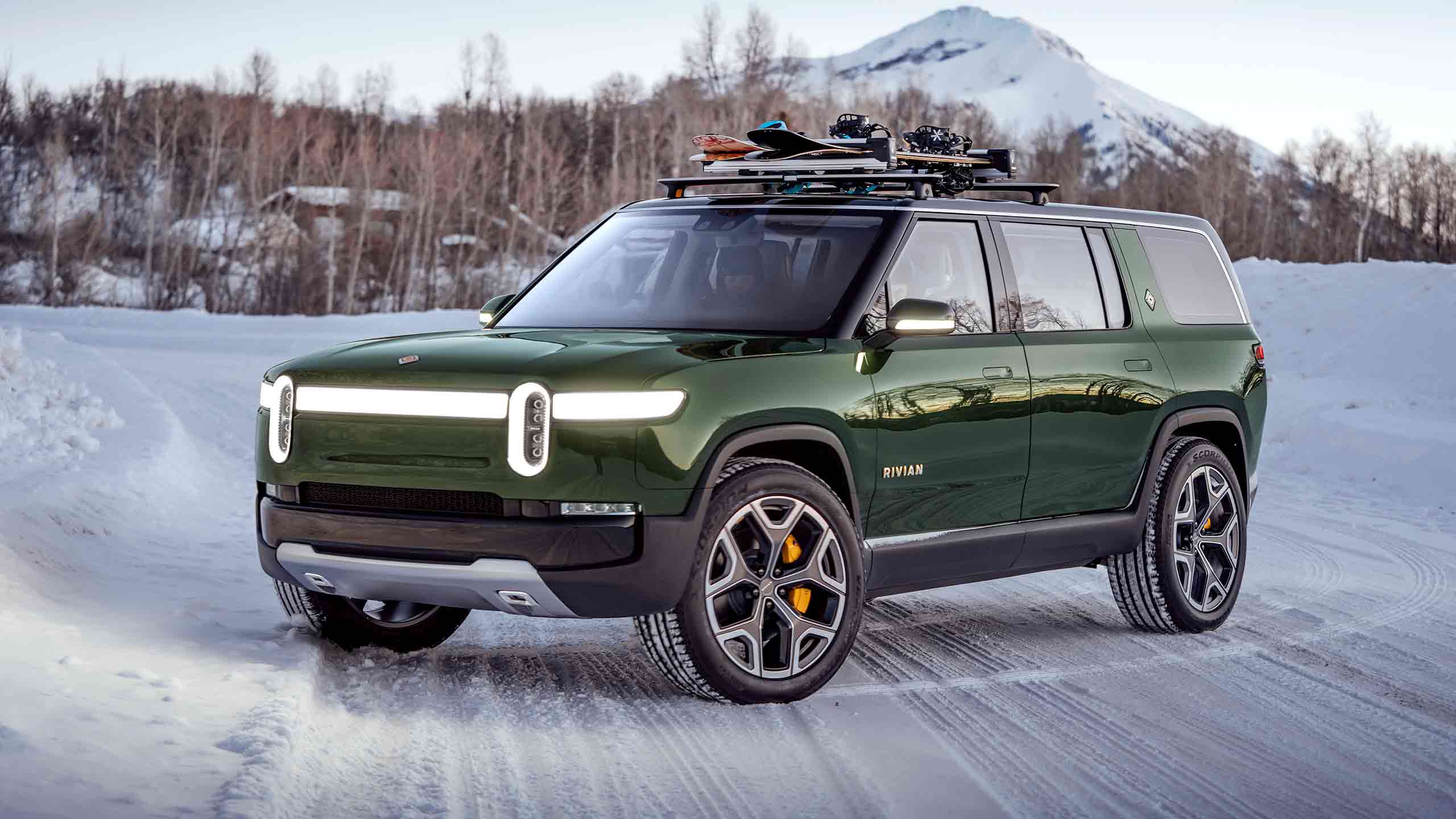 If there’s one news story you probably already heard about this week, it’s that Ford is investing big money into Rivian. Both companies are entering a strategic partnership through a $500 million minority investment from Ford into the electric pickup/SUV developer that made a great impression at the LA Auto Show last year. Ford has confirmed this was in addition to the $11 billion Ford has already committed to the development of EVs.

So far two Ford EVs have been confirmed to be development – a “Mustang-inspired” crossover and a version of the F-150. What Ford hopes to gain with the partnership is access to Rivian’s flexible skateboard platform for a new vehicle… or three. That platform is what enabled them to make the two coolest EVs in development anywhere in the world, and that’s a fact. Ford could use that platform to develop an EV version of all 700 SUVs and crossovers they have on the market.

And probably another big motivating factor behind the investment is to keep Rivian’s tech out of the hands of Ford’s competitors. One of Ford’s executives is joining Rivian’s board of directors as part of this deal. Rivian remains an independent company, however.

This partnership is a two way street though. Rivian is looking to start producing trucks next year and could also stand to benefit from Ford’s industrial expertise and resources. That’s good because Rivian seems to be the only EV “startup” that isn’t full of shit.