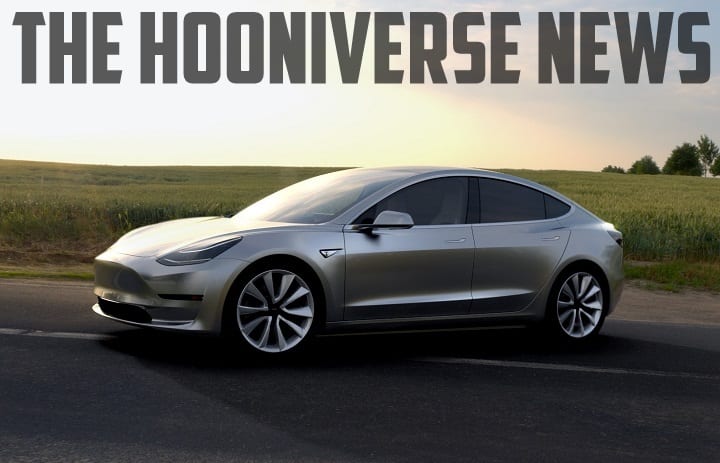 Welcome to the Hooniverse News! As always, this is a weekly recap of some of the biggest stories in the automotive industry without the fluff or bull. I just throw in a little opinion of mine because I can. This week:

It was a pretty slow news week for the auto industry… right up until last night. Elon Musk invited hundreds of journalists and other people with hands to clap loudly with to his secret lair at the Tesla Design Studio in Hawthorne, just south of Los Angeles off the 105, to share in the excitement of him trying to present the most highly anticipated Tesla to date without a teleprompter. I was not worthy of attending in person to hear his plans for global EV domination, but it was live streamed… I’m glad I wasn’t there. Nevertheless, Tesla Motors finally introduced the Model 3, an affordable EV that will further solidify Tesla’s existence as a serious contender in the industry. Over 115,000 deposits were already placed for it before it had even rolled onto the stage, and that’s no April Fool’s joke. Many of those deposits were placed by people who felt the need to stand in line at a Tesla Store to be “the first”, even though online pre-orders started before any of the stores took them. I wish that was an April Fool’s joke. Technical details are still scarce and Tesla’s media site isn’t showing much either, but there’s already enough info to know that this thing is going to be huge – just not physically. The Model 3 is a mid-size electric sedan with room for five adults and all their gear. Compact EV architecture and space-saving interior design means there’s more room for occupants inside and plenty of storage at both the front and rear. Exact interior dimensions haven’t been released yet, but it looks like it’ll be more than enough. Elon even said you can fit a seven-foot-long surfboard inside the thing. 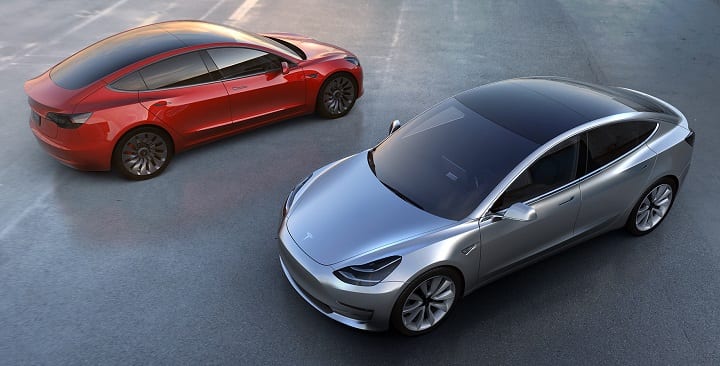 The Model 3 doesn’t inherit the crazy Falcon Wing doors from its big sibling, but it does take the idea of a panoramic roof to a new level. The entire rear half of the roof is a single piece of glass and the front window is taller than normal to create a more open, spacious cabin. As of now, there are no press images of the interior available, but from the live stream I can say there’s really not much to look at. It’s a very minimalist design and a single huge touch screen in the middle displays everything from navigation, media, air conditioning controls, and more. Despite the huge screen and all the cabin space, the speedometer is confined to a relatively small overlay on the top left corner of the screen. Those that hate centrally mounted instruments (like me) aren’t going to love being inside the Model 3. Not much was said about the car’s exterior styling because there really isn’t anything revolutionary about it. Styling closely resembles other cars in the lineup as it should and it borrows the Model X’s no grille philosophy even though there’s clearly a place for one. A few different wheel choices are offered, including a carbon fiber wheel option that was seen on one of the cars at some point during the event. 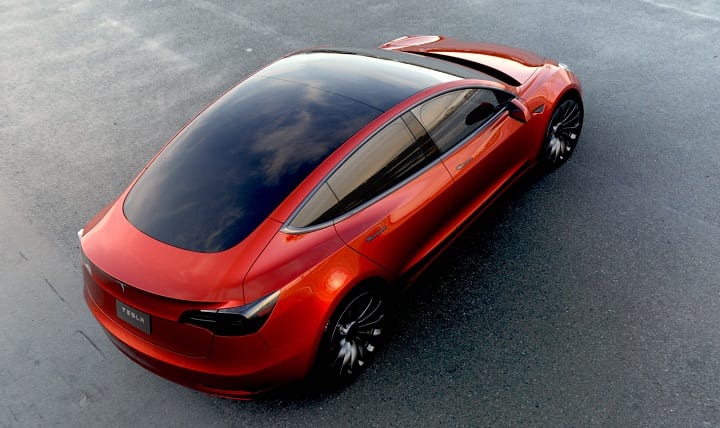 Now for the important bit. The Model 3 will go at least 215 miles on a single charge; expect to see that range increase as more Model 3 variants are announced. Tesla did not go into specifics about batteries or electric motors, but I can report that their awesome electric all-wheel-drive system will at least be an option. 0-60 mph on the base Model 3 will take under 6 seconds. Fortunately, Elon said to expect “much faster” versions further down the road. With the Model 3, Tesla anticipates company-wide volume of over 500,000 vehicles per year. Let’s just say Tesla’s new Gigafactory is about to get very busy with production of the lithium ion batteries that go into them. As Elon puts it, “in order to produce half-a-million cars a year, we would actually need to – the same battery production, w-we would basically need to absorb the entire world’s lithium ion battery production”. Helping to charge said batteries is an ever growing Supercharger network which is expected to double by the end of next year. Now for the real big news, the Model 3’s pricing is confirmed at $35,000 before incentives. Autopilot [update: it *might* just be the Autopilot sensors that come standard with actual capabilities costing extra], supercharging capabilities, that 215 mile range, quick acceleration, and top-spec safety features are all included at that price. This might just be the best EV that anyone (more or less) can buy. Production starts sometime in 2017 and Elon is confident deliveries will commence before the end of 2017. If you want to possibly see one in your driveway by the end of next year, you should probably hurry in to your nearest Tesla Store (if you live where they’re not banned) or go to teslamotors.com to place your deposit. [Source: Tesla Motors]

The 2017 Volvo S90 will start at $47,945 when it arrives in dealerships this summer. Volvo’s gorgeous new flagship comes well equipped at that price (T5 Momentum trim) with a 250 horsepower turbocharged four-cylinder engine, standard leather, a nine-inch infotainment touchscreen, legendary Volvo safety, the most advanced semi-autonomous features in its class (yes, as standard on the T5 and up), and did I mention that gorgeous design? Step up to the T6 AWD Momentum for $53,945 and be treated with 316 horsepower from a turbocharged and supercharged four-cylinder engine as well as nearly every convenience and comfort option thrown at it. It’s not cheap by any means, but it could be a bargain compared to some of its competition. [Source: Volvo]

Spyker’s comeback, the C8 Preliator, will cost $354,990 and be limited to just 50 units worldwide. In “standard” form, the C8 Preliator is a very special beast with aviation-inspired styling, insane attention to detail, and a sonorous supercharged 4.2-liter V8 delivering 518 horsepower. A rear-mounted Getrag six-speed manual is standard and a rear-mounted ZF six-speed automatic is an $8,000 option. With styling by former aerospace engineers, power by Audi, and handling by Lotus, it’s a car that’s worth your attention. [Source: Spyker Cars] 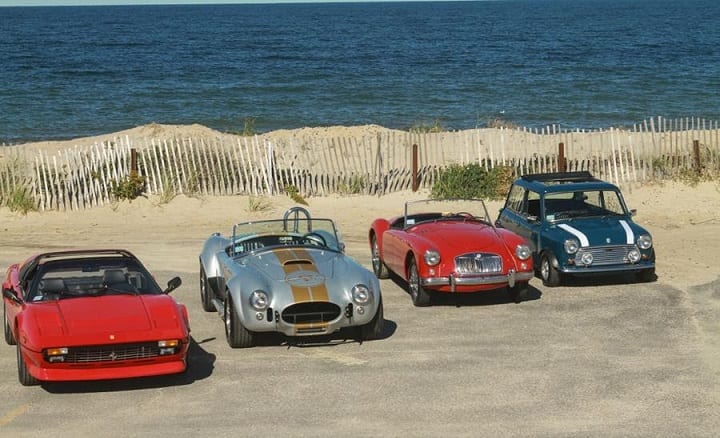 A new start-up firm called Classics&Exotics is looking to merge the passionate world of fine motoring with the future of ride sharing. Classics&Exotics is the first peer-to-peer vehicle rental marketplace focused on classic and exotic vehicles and it launches nationwide with the first rentals this weekend. For owners, it’s a chance to earn money from cars they’re willing to share; for drivers, it’s a chance to try out a car on the bucket list or kill time out on the open road. The site gives plenty of control to the owners on how their car will be used and by who while a rating scale self-polices renters and owners alike to prevent abuse.  Over 100 cars and 1,000 members are already registered. Everything a 2012 Cadillac CTS-V to a 1973 Steyr Puch Pinzgauer 712M can be rented by the day. Those interested can head on over to www.classicsandexotics.com to review inventory and submit interest in a car. C&E then alerts the owners, allows both parties to agree to rental terms, and then arranges logistics including insurance and roadside service contacts. And if you’re wondering, all cars pictured above are currently available. My favorite car on that site has gotta be this awesome 1951 Pontiac Chieftain though. [Source: Classics&Exotics]

That’s all I’ve got for you this week, so now it’s your turn. If you saw anything, fixed something, broke everything, or otherwise did anything even remotely car related that you want to share with your fellow hoon, sound off in the comments. Have a good weekend. [Image © 2016 Hooniverse/Greg Kachadurian]