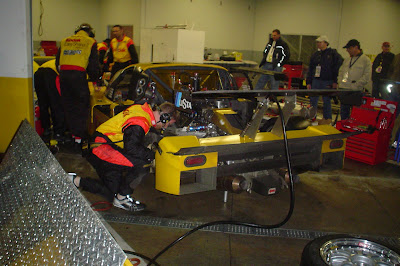 The three of us are sitting in the motorhome, about 2:30am that Sunday morning, watching the race out the windows and watching it on SpeedTV. the Kid looks over at me and says, I swear, “John-John, this is surreal”. I was floored. I was watching this boy become a man and he described the moment perfectly.

Of course, in this deep moment of mature reflection, this olelongrooffan said, “Let’s go to the pits”.
And the Kid and and his Uncle John-John did. thejeepjunkie was to pooped from bossing around those Porsche mechanics earlier in the day and he decided to stay home with his friend Bud, under the Lite.
So the Kid and I set off. On the way, again at the west horseshoe, we saw Chip Ganassi’s 02 car spun and being recovered. Guess we should stay away from that corner. We got to see this Kodak car get a 20 minute brake job, rotors included, and yes, we saw this car come into the garage area, stayed for the whole show, and watched it leave. It was the same DP we saw spun out in the west horseshoe earlier that day.

It is a real trip at this race. There are semi off duty crew members catching a quick snooze whenever and wherever they can. Mere yards from the active racetrack. Yeah, the noise is deafening. But they all have their headsets on and spring into action when called upon. Shortly after this picture was taken, we walked down a few pit stalls and came across a guy, in the lower left of the following photo, working on a couple sets of tires. I asked him if they were heading to the truck, meaning wrecked out or terminal mechanical failure. He replied, no, the previous tenants of this stall were already in the truck. He worked for Mazda, the next booth over. I told the Kid to head into that booth and up to the pit wall while this olelongrooffan kept talking to the Mazda dude.
Suddenly, the Mazda dude took off his headset and put it on the Kid’s head, saying, “Don’t touch anything”. I was floored and the Kid  didn’t know what to do.
Unbeknownst to me, while he  had that headset on, the Master of Operations came on the radio and said, “Next time around bring it in and we’ll take four tires and a change of drivers”.
Once the Mazda dude saw all the activity in the pits, he snagged that headset off the Kid’s head and got to work, doubletime.
the Kid looks at me and tells me what had happened. I was so excited for him.
I suggested he go back up by the pit wall and hang out. You can see him in the above image sitting in the corner, but definitely not in trouble.
Needless to say, we stuck around for that pit stop, and took pictures. Check out the Kid’s sh** eating grin…
and mine, too. One of the best parts of this tale is this that #70 Mazda won First in Class.
Now for the best part.
As we are walking back to the motorhome, the Kid tells me, “Ya know John-John, I knew at the same time as everyone on that team they were going to come in.” I didn’t say anything and we continued to walk along, each of us in reflective thought.
the Kid then gave me this biggest compliment I have received in some time. He said, “John-John, every time we hang out, we always do something fun.”
Kid, just wait until the Amelia Island Concours de Elegance in March.
Oh wait, that is another post.
Just know Hoons, the Kid and this olelongrooffan, that night, were sure able to
Celebrate Life.